We had the good fortune of connecting with Annette Davey and we’ve shared our conversation below.

Hi Annette, how do you think about risk?
Taking risks is a big part of having a successful career. Several times i have been offered an opportunity to work in different countries on different projects and each time i have embraced the risk it has turned out really well. At the beginning of my career i saw an opportunity that i might be able to take and i worked super hard to make it happen and to turn it into the opportunity that i hoped it would turn into. This meant working really hard and doing 2 jobs at the same time to make it happen but it opened up the doors of the film industry to me. 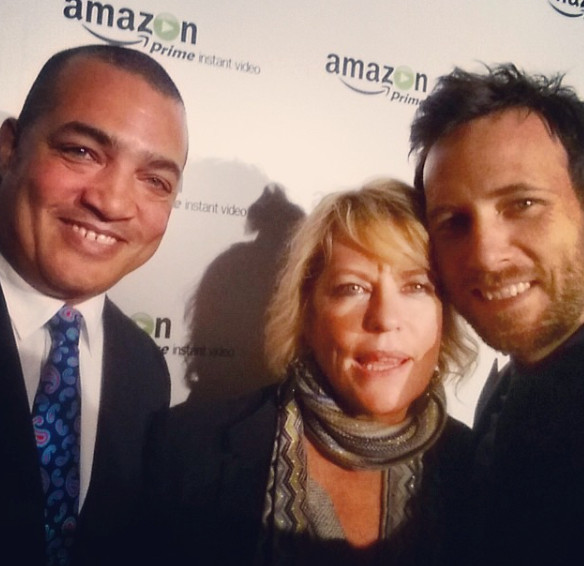 Let’s talk shop? Tell us more about your career, what can you share with our community?
As an editor we are a large part of the creative process, and often people arent aware of how large our contributions are to the movies and TV shows that we edit. People think we take out the slates or the bad bits, but we are involved in all aspects of the storytelling. We often rearrange the story, move characters around, and change the nature of the performance enormously. We are involved in creating all the visuals for the film and we also are heavily involved with the music in the film. Often editors select all the music in the film during the edit so the film plays well for an audience and hits all the right emotional or comedic moments of the film. We use sound as a large editing tool also, the placement of sound fx can change the nature of a cut and bring different information into the scene. This is all recreated at a later stage once the film is “locked” but we set the template. I have been working as an editor for a long time, I started in australia and went to the australian Film & TV School, which was a wonderful experience. I worked as an assistant editor and was fortunate to be given editing opportunities fairly quickly and was able to work in Italy as an editor on an international Award Winning music show for Rai Uno, Notte Rock. I won an award to study in the USA to learn more about the new digital editing systems, which put me in a good place in my career and I was able to continue working in the USA after this. Its not easy going to a new country and working, I had to learn a new “film” language in the US to be able to communicate properly and it takes time to get established, but this motivated me to work hard as i didnt want to lose these opportunities. But it was an exciting time and now I am established here I am so happy i was able to  make this happen. I still work in australia, most recently I consulted as a supervising editor on “The End” a See Saw films Australian/UK production which will be seen on Showtime in the fall.

Let’s say your best friend was visiting the area and you wanted to show them the best time ever. Where would you take them? Give us a little itinerary – say it was a week long trip, where would you eat, drink, visit, hang out, etc.
lets hope they come after the current situation!!! I would generally take people to all old hollywood spots, musso and franks, any of the old buildings and studios. Doing a studio tour can be fun, the paramount tour is short and has loads of history. There is a lot of history in Los Angeles to learn about, especially if you are a film fan. The building that I live in which is a building from the 20’s was home to Mae West for 49 years. i would also go to. the beach, mostly malibu or venice as this has a great atmosphere with all the locals on beach. I would suggest a visit to chateau marmont, another old hollywood spot for lunch or dinner and perhaps lunch at nobu in malibu. The hollywood bowl is always great and has a fantastic atmosphere, live music in the hills. Another uniquely Los Angeles spot is the Magic Castle in hollywood, which has magic shows and is a rare and fascinating place. Next I would go downtown where there all kinds of great bars and restaurants, and during the day I would check out the museum scene downtown, MOCA, The Broad, and the newer arts district galleries.

Shoutout is all about shouting out others who you feel deserve additional recognition and exposure. Who would you like to shoutout?
I have had several very important mentors in my career. Firstly rhonda macgregor at the australian film & TV school was an incredible support and mentor to me as I was beginning. Second Gabriella Cristiani an Oscar winning italian editor who brought me to los angeles and taught me so much about editing feature films. I also have been lucky to have the support of many producers during my career, colette burson (creator of Hung), John Hart & Jeff Sharp (producers ) Kelly Mccormick (producer) & many other have supported me and helped me in my career and countless wonderful directors most recently Nikole Beckwith director of Together Together which just premiered at the Sundance film fesitval.

Other: https://www.thewrap.com/together-together-film-review-patti-harrison-ed-helms/ a review of a film that i recently completed which premiered at sundance

Image Credits
nettiefltsm.jgp taken by jill. greenberg all the rest taken by myself