We had the good fortune of connecting with April Jones and we’ve shared our conversation below.

Hi April, how do you think about risk?
There is something seductive about the idea of influencing your own destiny by the forward actions you risk taking. Just by taking action means you are learning and growing towards succeeding, whatever success means to you. The thing about success is when we set our own standards of what that means, it makes risk-taking much easier. There can be a lot of fear and unease around taking risks, but the heavy feeling of regret is far worse than any sort of failing, rejection, or embarrassment of trying. Taking risks has definitely helped me discover and develop who I am as a creative being. My values, goals, and unique point of view are a result of a lifetime of risk-taking. From hitchhiking to the bay area to attend punk shows as a kid to single-handedly documenting one of the most offensive rock and roll bands, and starting my own bands, creating art, and skateboarding. Every action can be a risk, even playing it safe can be a risk. The dream killer is worrying about what other people think of you. People are going to judge you no matter what, that’s just the way it is. If you accept that fact, it makes risk-taking easier. When you stop worrying about how others are going to judge you, it makes your creation and mission much more genuine because it’s coming from your true authentic self and not what you think people want to hear or see. Take life by the horns, put on some fucking Slayer and ride til the wheels fall off! 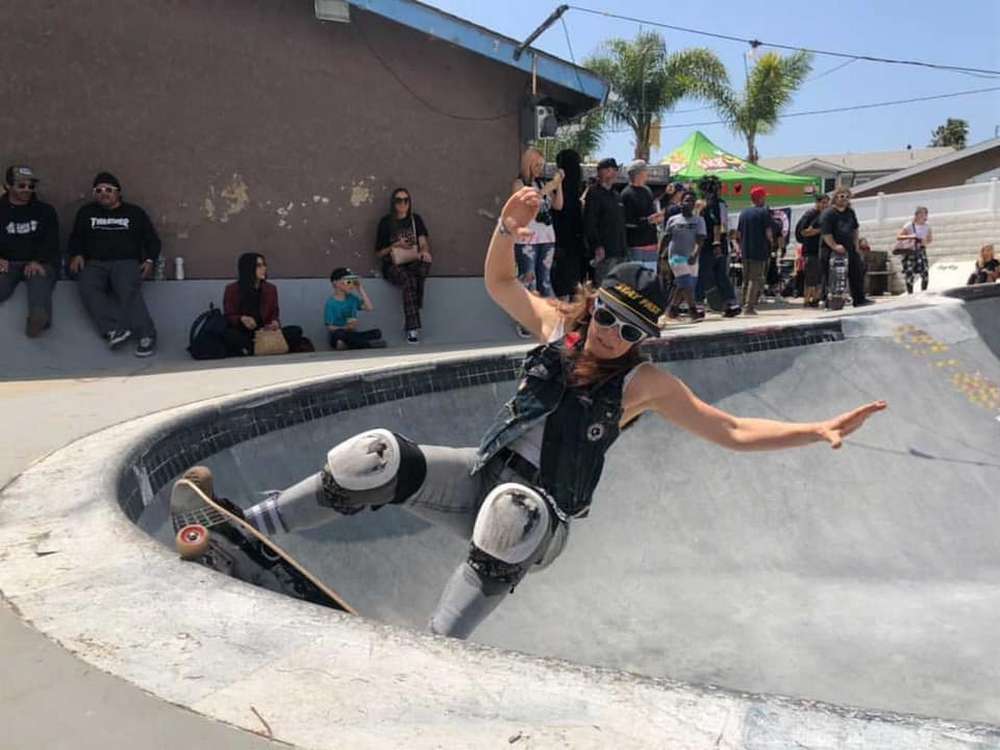 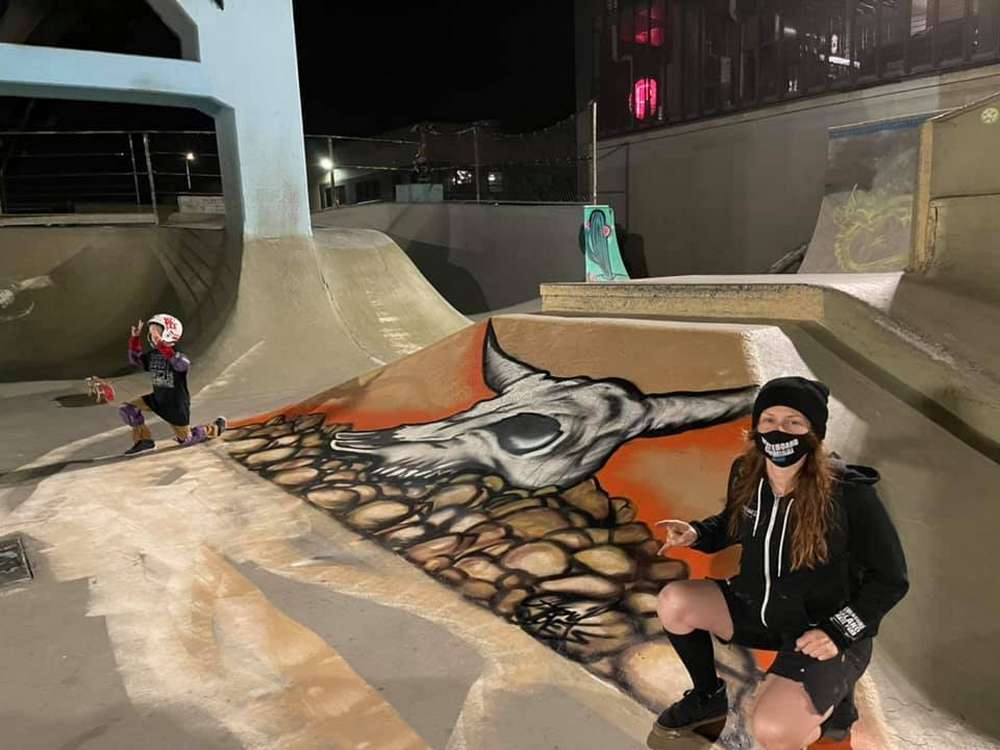 Let’s talk shop? Tell us more about your career, what can you share with our community?
I am a documentary filmmaker whose main body of work covers the underground heavy metal and punk rock music genres, and DIY skateboard communities. All my creative projects support each other; my music, paintings, murals, skateboarding, journalism.

I have always been very creatively active as a kid. Every creative pursuit led me to where I am today. I grew up drawing and got into skateboarding, music, theater, and performing arts at a very young age. I realized acting wasn’t for me when I landed my first big-time Hollywood gig as a background extra on NYPD Blue (showing my age here, Haha). I moved to Portland, Oregon right after high school and pursued a more creative career that better suited my talents: art department! I’ve had the opportunity to work as an art director, production designer, set dresser, scenic artist, painter, storyboard artist, and story producer on many various productions such as; Portlandia, Red Bull, Roku, Kleenex, Little People Big World, Cake music video, many other music videos and commercial work along the way. I have also had the opportunity to be a featured guest speaker for the US Embassy of Finland, a Women in Film conference, and the State University of Wisconsin-River Falls. A huge shoutout to them too!

During film school, I took advantage of the free access to film equipment and created a collection of short documentaries based around the local heavy metal and punk rock music genres. I applied for a local public-access TV series and was accepted! I went on to produce, direct, and edit nearly 40 short music journalistic-style documentaries in 6 years on a $0 budget, which aired on the Independent Television Network. That led me to create my first feature-length documentary called Kings of Sleaze about The Mentors, one of the most comically offensive bands to come out of the 1970’s (watch on Amazon Prime). I am now on my 2nd feature-length film called Concrete Law. It covers the history and movement of do-it-yourself skateparks and dives into the battle between Channel Street Skatepark and bureaucratic control. Channel Street Skatepark successfully existed for over a decade under Interstate 110, despite its illegal creation, until overpass construction led to an ongoing shutdown. Channel Street founders and advocates continue to push for a reopening but the legal matter proves to be a much more complex task than anyone ever imagined. This film uncovers the history of the park, from creation to current status, through interviews with park founders, local and pro skaters, business owners, and city officials. I also have a new music project called Shoebox Jones. It’s thrash metal, skate punk type stuff. Really fun! I write the songs, play guitar and do vocals. I’m also having art shows around the Los Angeles/SoCal area.

I’m super stoked to be a part of this incredible creative global community. It’s very humbling to have such solid support from other creatives and be able to give support back too. I’m excited to keep pushing my creative boundaries and keep collaborating with amazing artists and like-minded individuals.

Oh gosh, the lessons I’ve learned along the way are surmountable. I think the hardest thing about being an artist and expressing yourself through any sort of visual or auditory medium is believing in yourself. Sometimes your inner critic can be the worst! I wrote a song about it called Demons, but in reality, it’s your own mind. Haha, that’s why we have to be careful about whom or what we expose ourselves to. There’s a lot we absorb from the world and sometimes end up regurgitating and spreading toxic deprecation because of it. That doesn’t help. Focusing on problem-solving rather than the problem has also been a huge challenge and lesson I’ve learned along the way. Sometimes, we get so upset if something goes wrong, but the quicker you can look at the data and piece together another option, it becomes part of the creative process. And then you feel like MacGyver or Merlin. Visual storytelling alchemists, we are… And what sets me apart from others is …I don’t have a couch. Haha 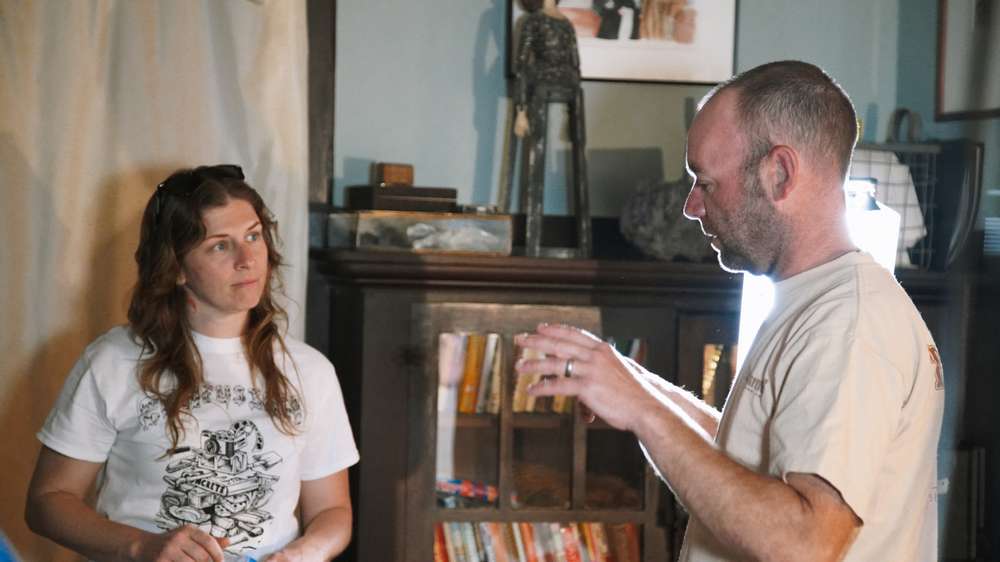 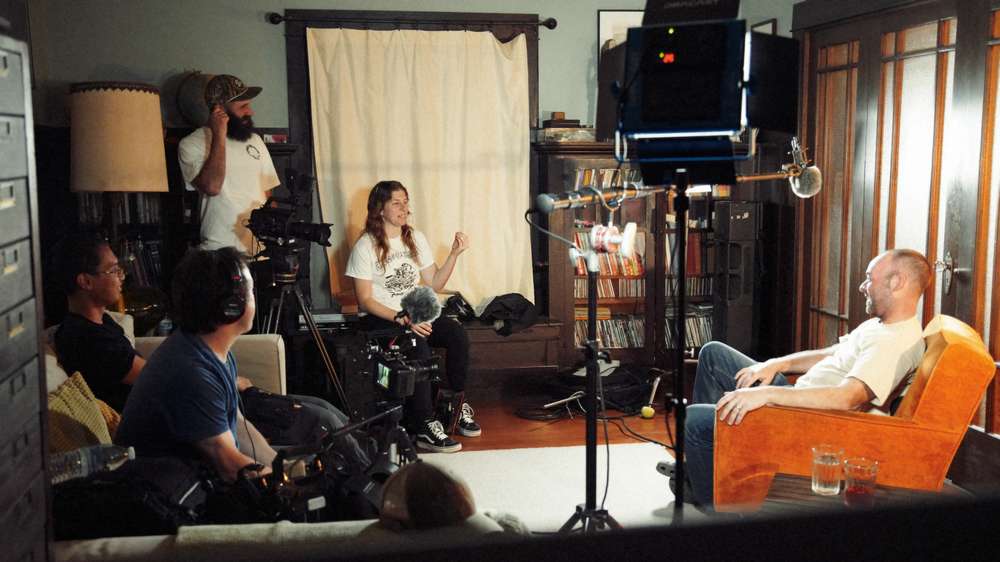 If you had a friend visiting you, what are some of the local spots you’d want to take them around to?
My favorite skateboarding spots here are Channel Street Skatepark and Bronson Ditch. Head to the Port of LA to the Fish Market. Some good eatin’ right there! Sunken City is a cool ocean view spot, though ya gotta hop the fence these days! Ha! All the art walks are my favorite activity here. You’ll meet the most interesting people! Like the Hive Gallery, DTLA. That is a MUST if you like dark fantasy type art, sooo good!! 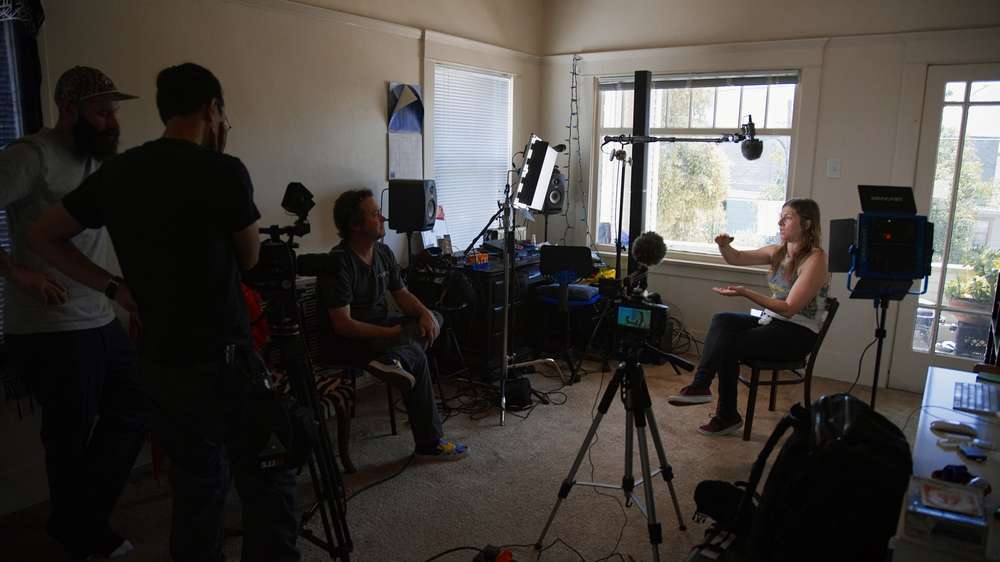 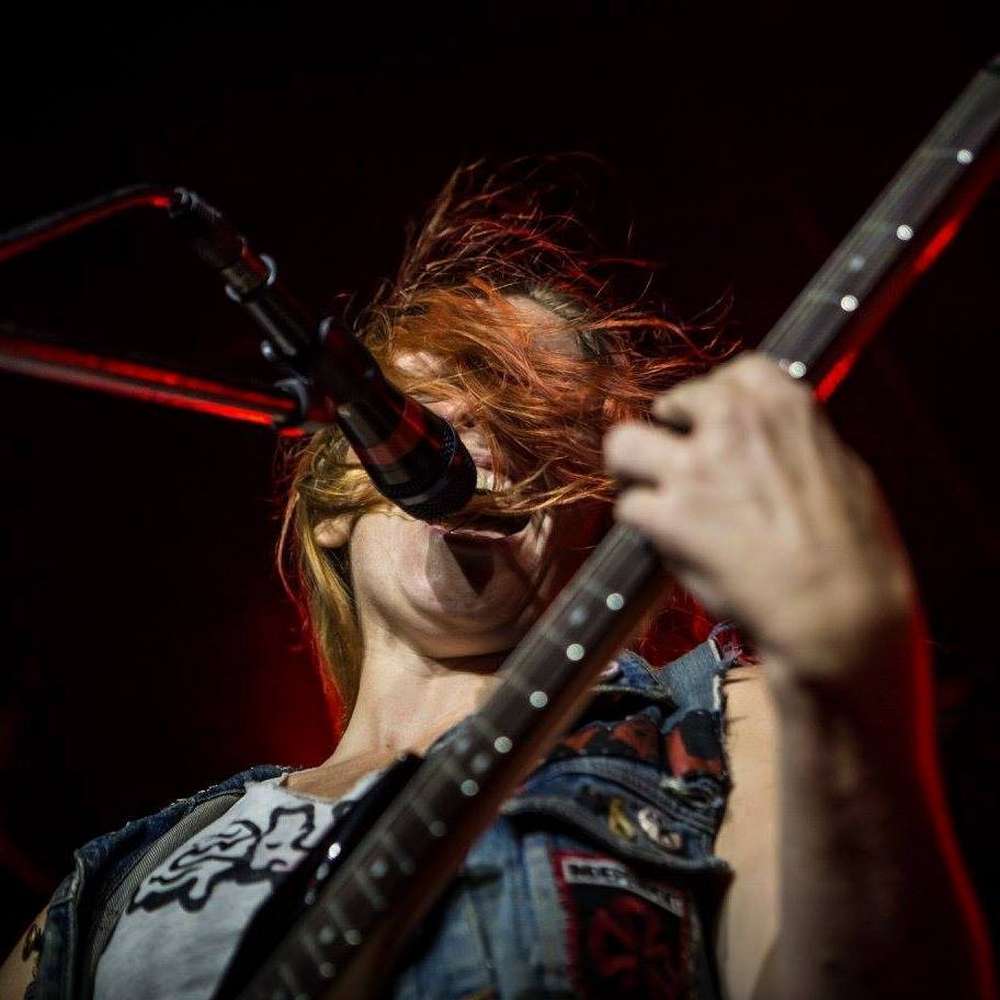 The Shoutout series is all about recognizing that our success and where we are in life is at least somewhat thanks to the efforts, support, mentorship, love and encouragement of others. So is there someone that you want to dedicate your shoutout to?
I want to give a shoutout to every indie artist, musician, filmmaker, skateboarder, venue, small business, and community supporter who is constantly uplifting and supporting each other. The Calimucho Screenprinting campaign said it best, “Together We Are Stronger”! We gotta stick together. A shout out to the San Pedro Skatepark Association and the Wunga Posse for being the most resilient group of skateboarders I know! Saving Channel Street Skatepark #freechannelstreet. Shout out to all my mentors and friends at Portland Community College, Portland Community Media, TalNexus, Iron Light Labs, Vans, Juice Magazine, Bigfoot Magazine, The Mentors, Portlandia, Burnside Skatepark, Channel Street Skatepark, all the DIY skate fam, TubeScience, The Resilience Coach, Killbot, Exotic Magazine, Thrasher, Night Visions, Foto Phortress, Scene TV Raw, Few and Far crew, the Desert Pool Cartel, and to everyone who has always believed in me and have been kickin’ it with me through this bitchin’ ride! Oh, and a shoutout to my Mom who told me “Can’t never did anything” when I would say I can’t do something. Damn right! HA! Thank you for your support and your friendship, always! 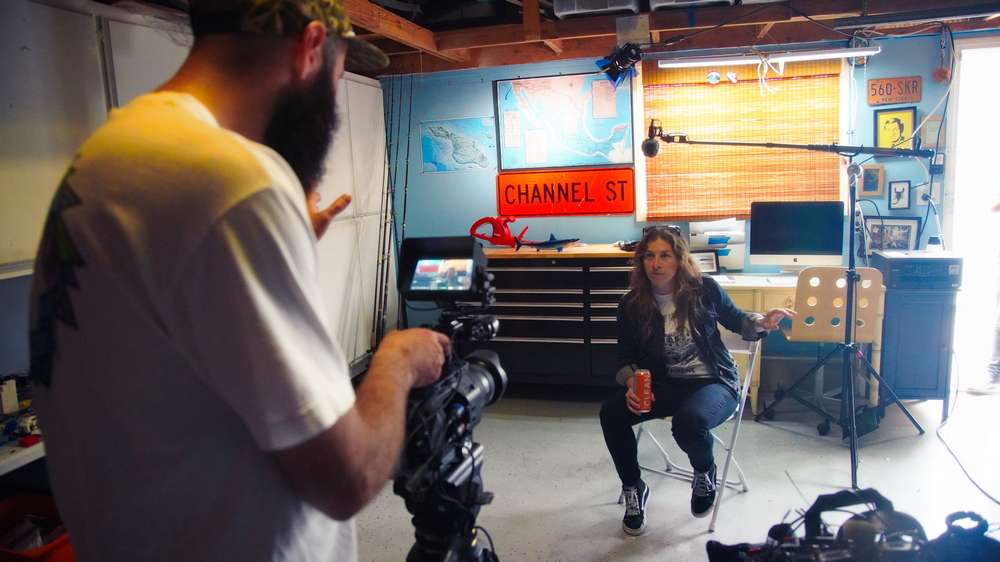 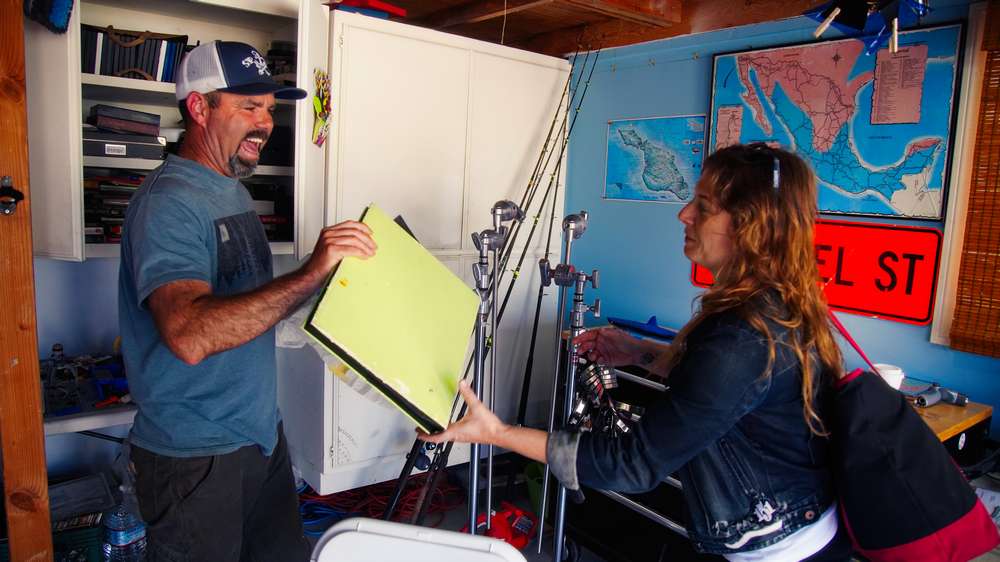