We had the good fortune of connecting with Brooke Finegold and we’ve shared our conversation below.

Hi Brooke, we’d love for you to start things off by telling us something about your industry that we and others not in the industry might be unaware of?
Comedy, sort of famously is a man’s world. My mom is always telling me to quit comedy because she’s worried that I’m putting myself in dangerous environments, which I sort of am. I am often running into a dimly lit room with middle aged men drinking beers and complaining about their horrible girlfriends, wives and mothers, and running out immediately after I tell my jokes. A lot of networking and booking happens after mics and shows, but as a young adorable girl most of the time the best option for me is to just get home safely. There is a lot of sexism, sexual harassment, racism and homophobia in comedy, something that unfortunately is dying out much slower than desired. A lot of this is riding off of the ancient, horrendous saying that has infiltrated every middle school in America, which is “women aren’t funny.” What I’ve come to realize after religiously attending an incredible all female open mic “Witty Titties” run by Genesis Sol, is that it’s not that women aren’t funny, it’s that women are uncomfortable. When a room of men are going on stage, saying awful sexist things and pulling their dicks out in the audience, it can be challenging for a woman to go on stage immediately after and “make em laugh” so to speak. People are always shocked by the things I tell them happen at open mics, and the things straight men will say without their little brains stopping it with a thing most people have called a “filter”. Unfortunately, I don’t think these men will be changing any time soon. That’s why it is so important for marginalized groups in comedy to create their own spaces, shows, group chats even, where they can thrive off of a supportive and safe environment. That’s why I made my own show. 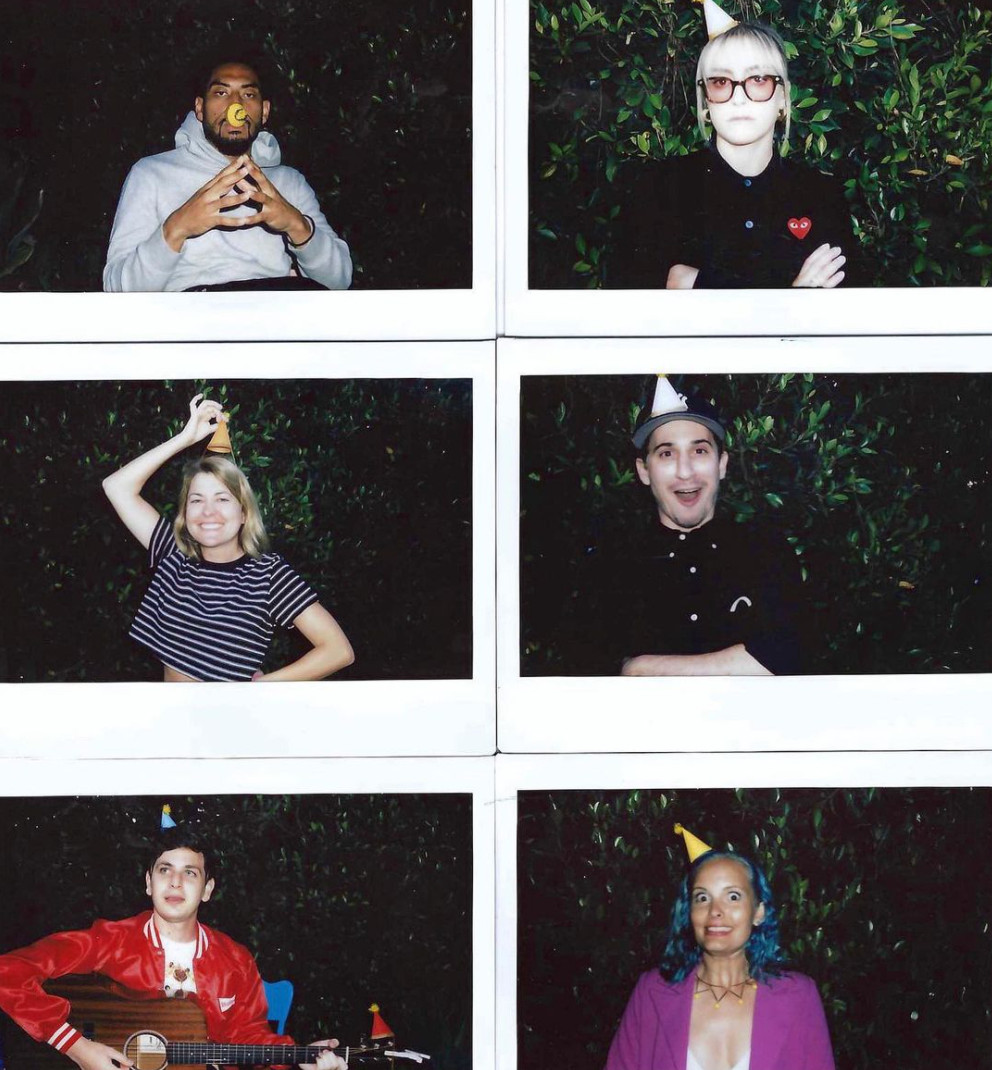 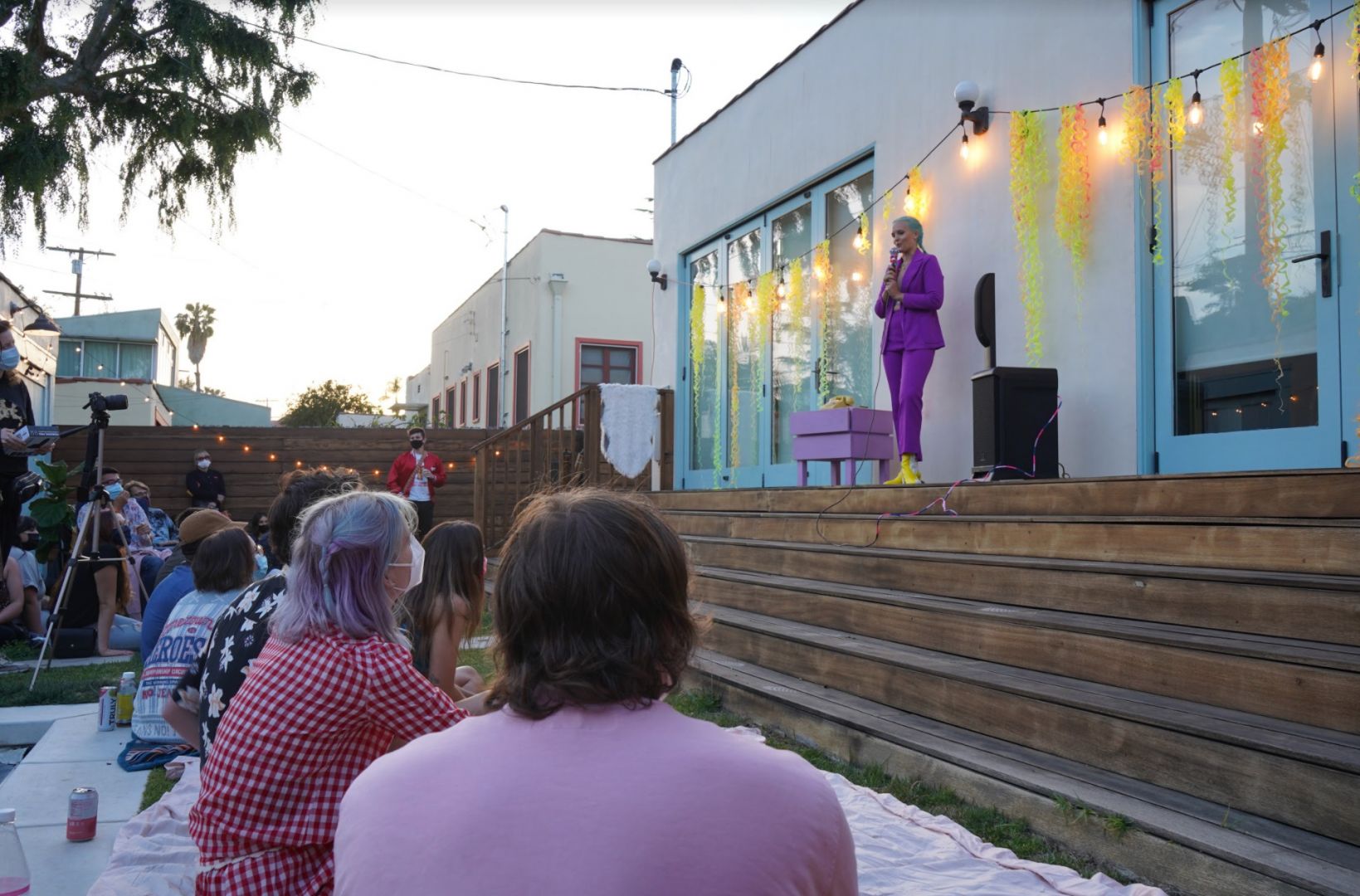 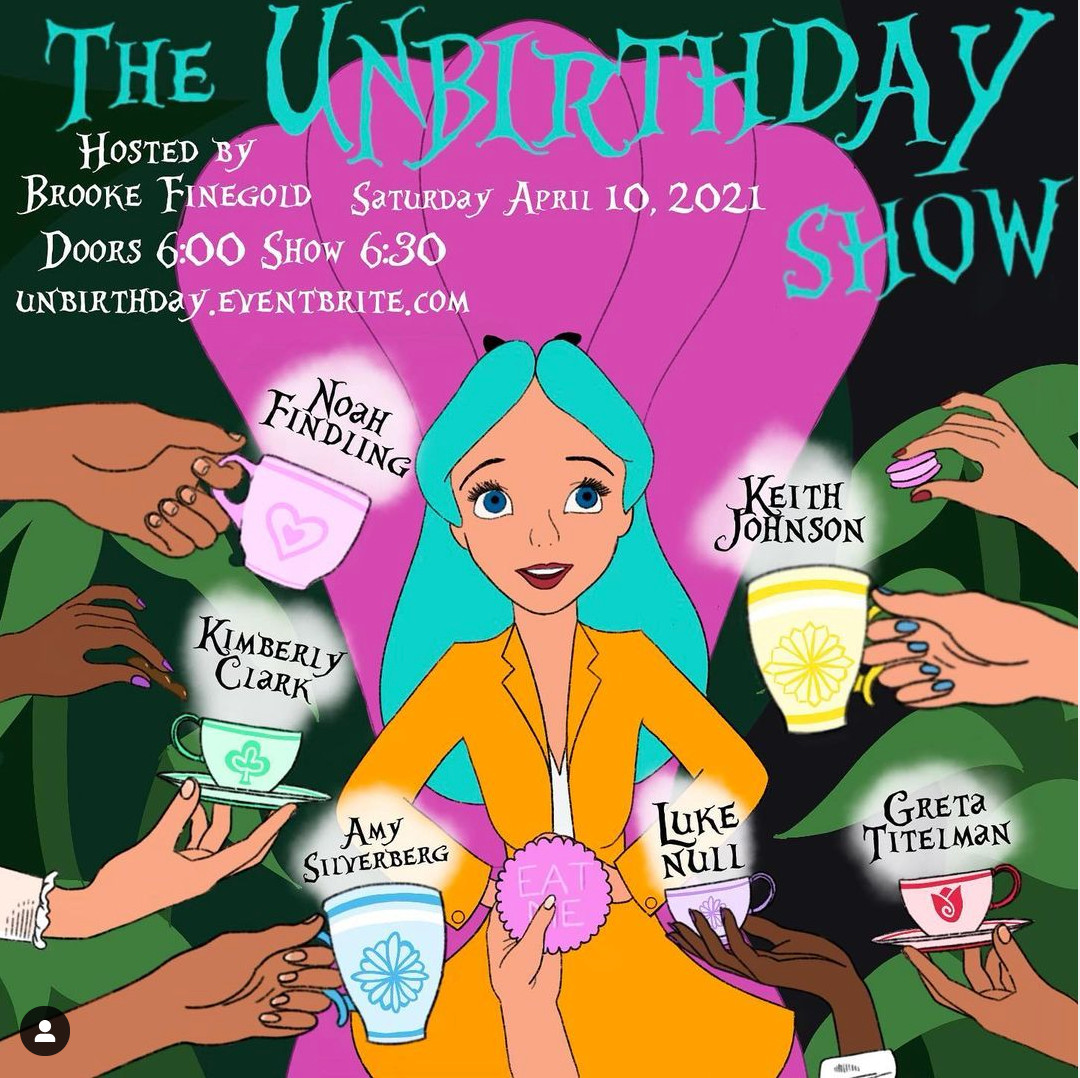 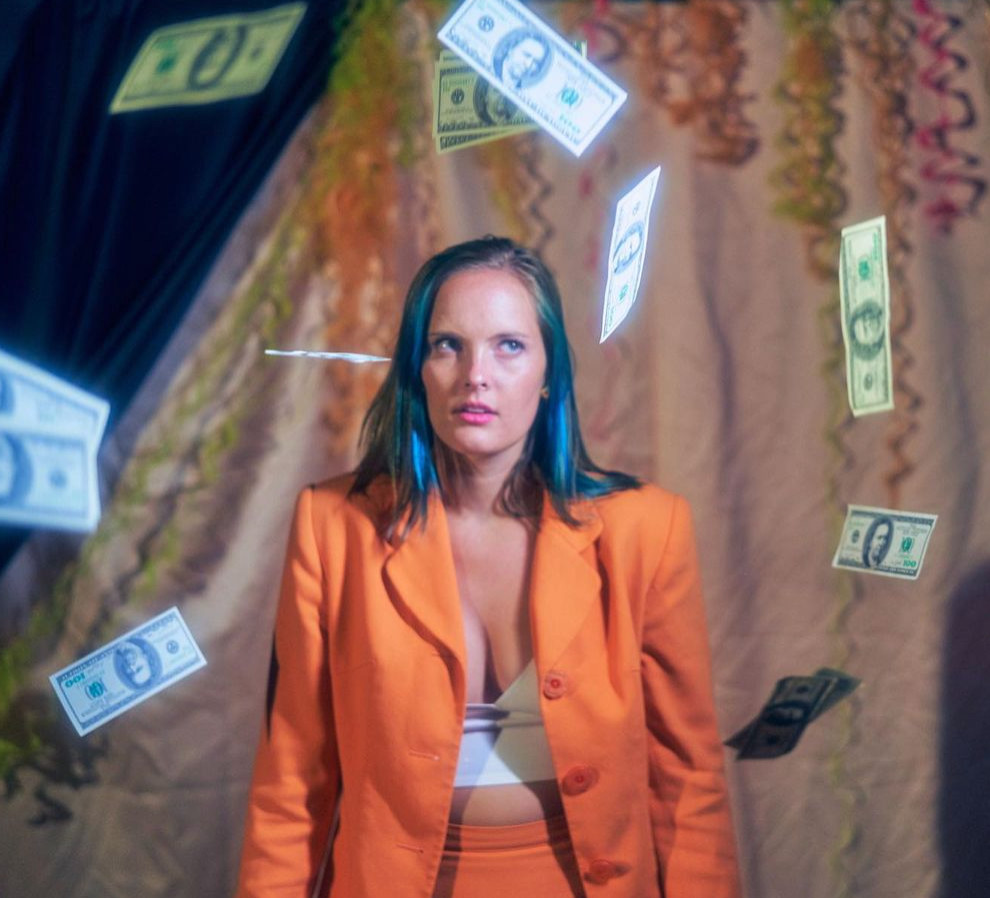 Can you open up a bit about your work and career? We’re big fans and we’d love for our community to learn more about your work.
Pretty much everything I do revolves around comedy and writing. Most recently I’ve been producing and hosting my monthly stand-up show, The Unbirthday Show, which has been so amazing to be able to bring back. This show is my pride and joy and the thing I am most proud of. I feel like I am really cultivating a really fun atmosphere and the audience and comics definitely notice. I am very cute little detail oriented so I put a lot of effort into making the show have that extra sparkle, like handwritten unbirthday cards for the comics, an adorable pastel stage, a suit that matches the stage, and cute boxes of candy at concessions. For me this show is such a true expression of my art because not only do I get to host and do stand-up, but it looks like I threw up on the stage. All of my favorite colors, aesthetics, music, comedians, and friends are in one place and it feels like the true manifestation of my artistic vision. It’s so so stressful but so extremely worth it.

I got to where I am now, which is only a year out of college, just by trying to perform as much as possible and meeting everyone I can. I am an extremely social and extroverted person, so whenever I go to mics or shows I always try to talk to the other comics and book them on my shows. This has resulted in some really incredible shows but more importantly some beautiful friendships and mentorships. I think starting a show was the best thing I ever did, and all I needed was a backyard, a microphone, and some funny people. I can’t recommend it enough for young comedians, and if you do it, book me!

Some of the biggest challenges as of recently of course, have been the disappearance of live events almost entirely. It’s been so depressing to not be able to do stand up, and like a lot of brave comics, I opted to not take the zoom comedy route. What I did that I really love is start a comedy newsletter (which you can sign up for at thetowncryer.substack.com!) which I send weekly and it’s sort of a blog style of writing with some silly photos and also comedic poems, sometimes videos, scenes, or lists. I just write what I feel and I feel lucky that some people actually read and enjoy them.

Something I want the world to know about my brand and story is that not only do I want to be someone who makes other people laugh, but someone who truly brings joy to everyone around them. For me that looks like creating a physical space where people can gather, express themselves, be authentic, and be celebrated for that. My biggest dream is to open my own comedy venue/queer bar that’s essentially my whole brand (rainbows, saying “girl boss” and wearing colorful pant suits) in one physical location. I want to work on bringing in marginalized people who may feel uncomfortable in other comedy/nightlife settings and giving them a space to be free and have fun without fear. I really just want people to be able to listen to great comedy, have fun drinks and sweets, and meet cool queer people who love the same art they do. Also something about my brand that’s so crucial is that I’m a bisexual girl boss pisces and I really have to include that.

If you had a friend visiting you, what are some of the local spots you’d want to take them around to?
Wow ok I’m going to pretend covid doesn’t exist right now… for food which is so extremely important I’d say some of my favorite places to go (mostly in Silverlake where I live) are Magpie’s for soft serve (banana with vegan brownie bites is to die for), Sugarfish for the most life-changing sushi if your life, a more local spot that’s insane also is Izakaya Osen. I am also a huge fan of Pine + Crane and their amazing boba and dan dan noodles. I walk the Silverlake Reservoir almost every day and I also love lounging in the Silverlake Meadow (great celeb sightings!) For coffee I have my top three: Silverlake Coffee which is local, affordable, and delightful. Dinosaur Coffee is quick, cute, and classic LA prices, and finally LAMILL which is as I joke “my mistress” because she is constantly seducing me and taking all my money. Also I saw Leonardo DiCaprio there so it’s pretty amazing. In terms of beaches I really enjoy Nicholas Canyon and Zuma Beach in Malibu and a good trip to Topanga is also great (gorgeous drive through the hills) with a little joint. As for comedy shows, I love Lyric Hyperion and Dynasty Typewriter, and bars you have to go to Akbar, the most iconic gay bar in LA. Walking up and down Vermont and Hillhurst in Los Feliz are a must, as well as Sunset Junction. Truly, I could go on, but I shan’t. 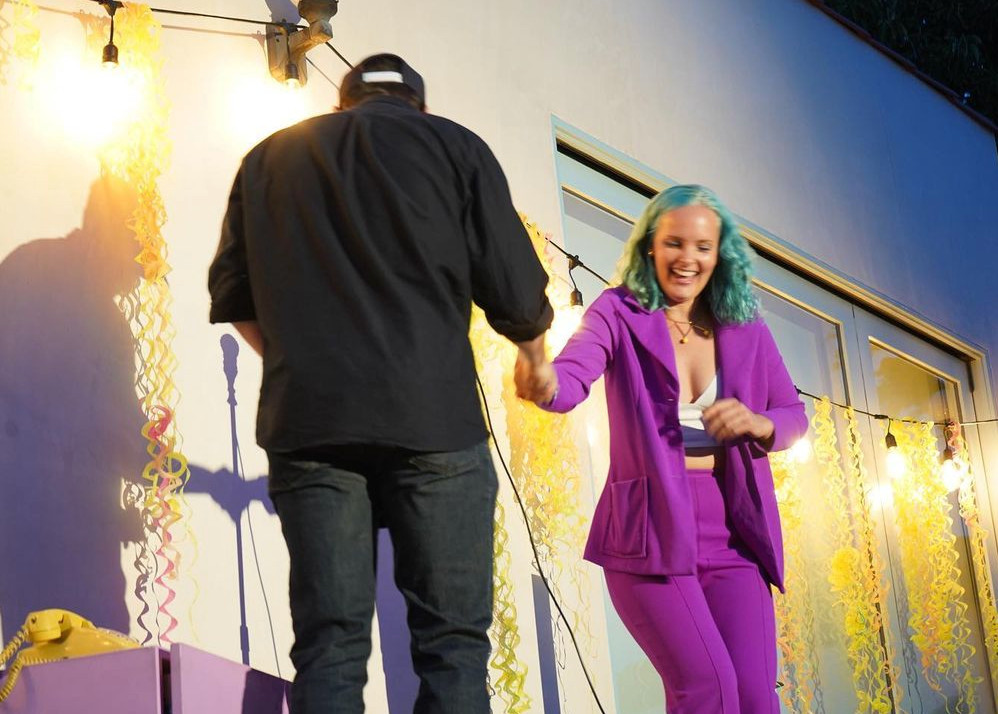 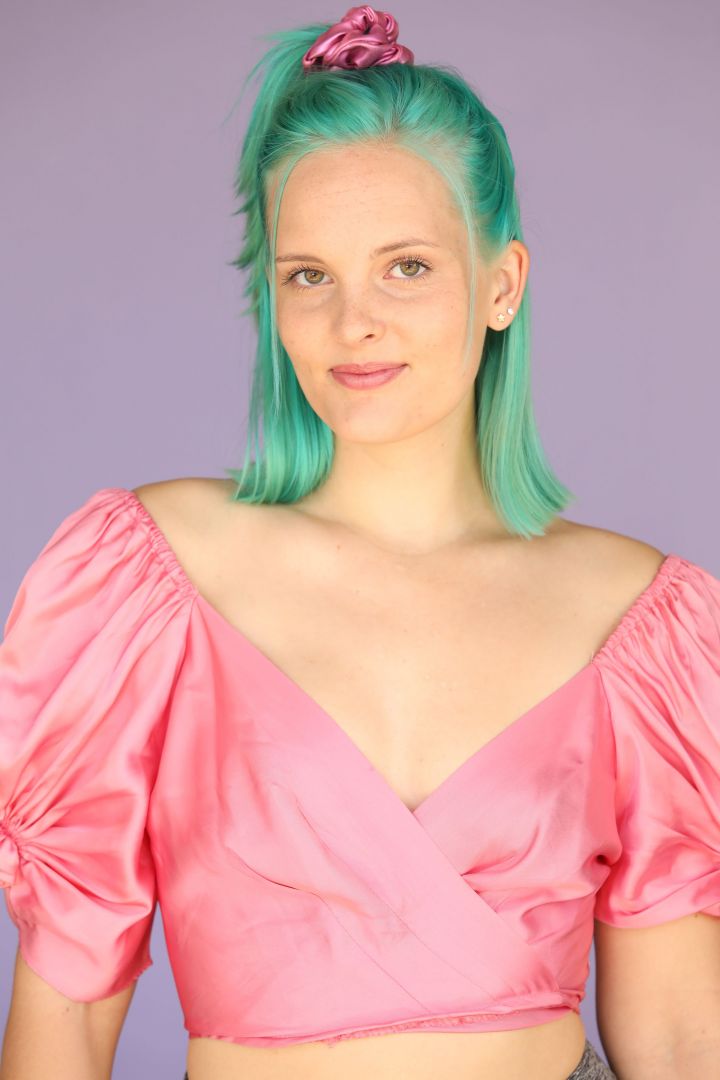 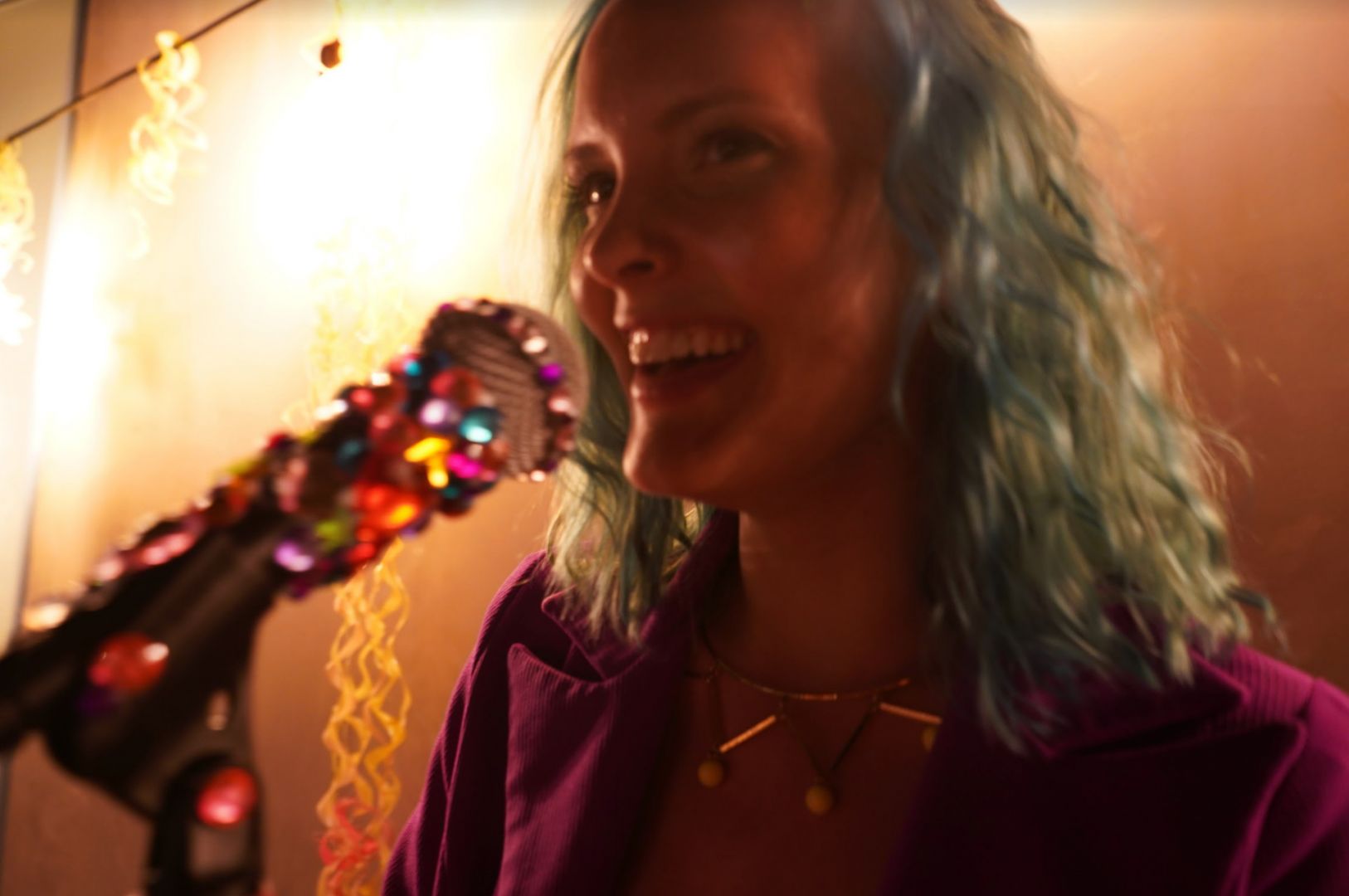 Shoutout is all about shouting out others who you feel deserve additional recognition and exposure. Who would you like to shoutout?
I would have to credit so much of where I am today to the comedy program at USC’s School of Dramatic Arts (which doesn’t have a name, so donors, go buy it!) Specifically my professors Zach Steele, Jude Shelton, and Kirstin Eggers. These three guided me through my time at USC and helped me form who I am as a comedian and person. There was a time in my life where Jude was not only my stand up professor, but also my therapist. These professors have really guided me through some existential shit as well as helped me “find the David” so to speak (me being the marble slab). Zach was my clown professor, and helped me realize that rollerblading to the (500) Days of Summer soundtrack was comedy, and helped me completely free myself of pretentiousness and just be funny. Kirstin taught me improv and sketch and has been endlessly supportive and silly and saw me through every year in college. She is such a wonderful woman with a wonderful wig arsenal. Jude, as I mentioned, was practically my therapist and my stand up professor, but is also a mentor, friend, and confidant. I am so inspired by her and impressed by her. Jude helped me to channel my anger and sadness into comedy, and that our obstacles only make us funnier. Jude’s class was also the first group of people I ever came out to, which is a huge testament to the lengths she goes to create a safe and supportive environment in her class. These three people will always be close to my heart.