We had the good fortune of connecting with Chris Aresco and we’ve shared our conversation below.

Hi Chris, why did you pursue a creative career?
Well, I pretty much spent the first twenty years of my life watching movies. I sort of always wanted to be a filmmaker, if for no other reason than to be able to say I didn’t waste the first two decades of my life alone in my basement for no reason. I didn’t really see an attainable route towards becoming one, though. It isn’t really the type of job that gets posted on Indeed. Once I discovered guys like Shane Carruth, James Ward Byrkit, and the Duplass Brothers, I kind of realized there was a way to just try and make a movie yourself with what you had. I had an apartment, two of the best actors in the world in Andrew Morra and Lennon Sickels, and a group of really talented creatives who believed in our project and were willing to come on and put the work in to make it. So now, after about a year and a half of work, my debut feature, Backwards Faces, is premiering at the Chinese Theater in Hollywood on September 15th as part of the Silicon Beach Film Festival.

Please tell us more about your work. We’d love to hear what sets you apart from others, what you are most proud of or excited about. How did you get to where you are today professionally. Was it easy? If not, how did you overcome the challenges? What are the lessons you’ve learned along the way. What do you want the world to know about you or your brand and story?
I think anyone who makes a personal film is immediately setting themselves apart from others. I don’t really subscribe to auteur theory because filmmaking is such an intensely collaborative process. I do, however, think that you should always ask yourself why you are the right person to tell the story you’re trying to tell. I think Backwards Faces is a very personal film to me in a way that may not be apparent to people who know me. I think that’s my favorite type of art. The type that means so much to the creator and leaves everyone else finding their own personal attachments to it. I am really proud of the film and the work it took to make it. I wouldn’t say it was an easy path, but it was definitely a fun one. I think, as a filmmaker, if you are making something to please others, rather than yourself, there’s really no point in making it at all. I set out to make a personal film that I was proud of, but I do think there is something in there for everyone. I won’t make any guarantees about the success of the film, but I would say that if you sit down to watch it, you’ll have a little fun and think about some things you maybe never considered before (unless you’re a quantum physicist) 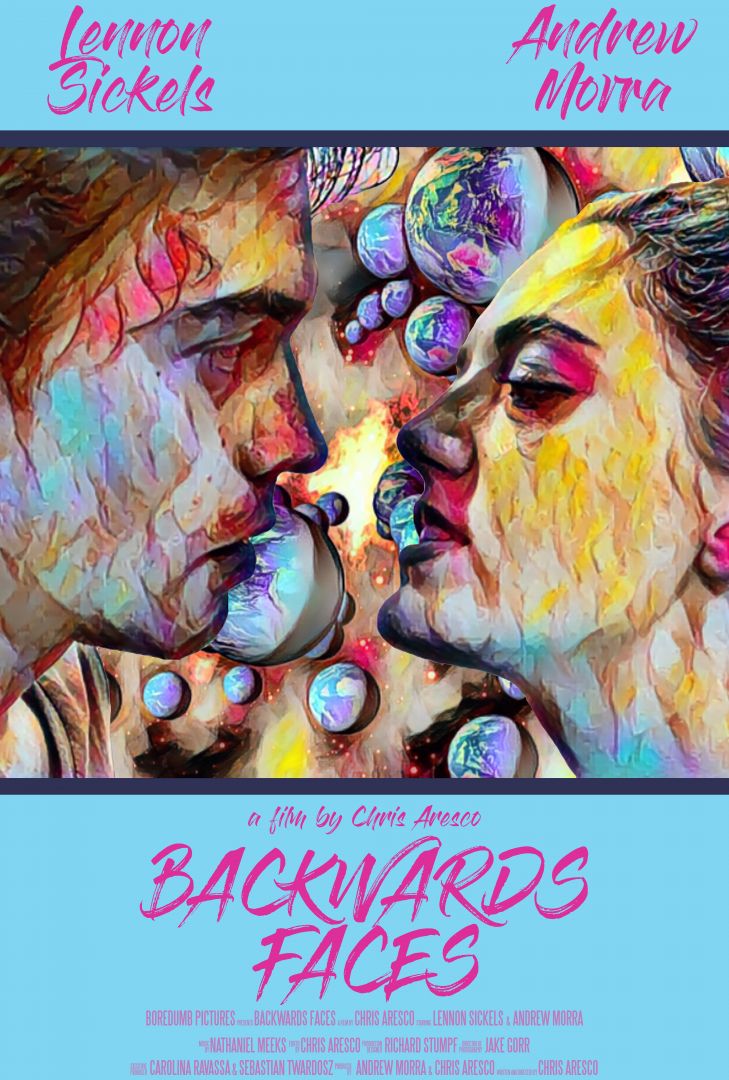 Shoutout is all about shouting out others who you feel deserve additional recognition and exposure. Who would you like to shoutout?
I think everyone who worked on Backwards Faces deserves more than a little credit. Our director of photography, Jake Gorr; our sound recordist and mixer, Tim Perdoch; our composer, Nathaniel Meeks; our actors, Lennon Sickels and Andrew Morra; our first AC, Casey Schreiner; and our gaffer, Wil Todesco. Working on a shoestring budget, it was not an easy shoot by any means. It was the very definition of an indie film set. We shot the whole thing in ten days using the only location we had access to, my apartment. When we accidentally ripped an electrical socket out of the wall (don’t tell my landlord), it was our lead actor, Lenny, who was on the phone with every electrician in the area to see who could get down to my place in the next twenty minutes so we could still make our day. I am eternally grateful to all the people who made the film what it is.