We had the good fortune of connecting with Daniel Corey and we’ve shared our conversation below.

Hi Daniel, we’d love to hear about how you approach risk and risk-taking
Risk-taking is pretty much the logline of my life and career. Any working artist will tell you the same. So many of us uprooted ourselves from the security of our hometowns to make our way to Los Angeles, hoping to make something happen in an industry that is entirely oversaturated. The thing of it is, while the entertainment industry is overwhelmed with talent, every person who contributes has a unique voice with unique ideas, and there is room for A LOT of unique ideas in today’s media space. To join the landscape, it’s just a matter of spending time in the city, getting to know people, and continuing to work and work until that day when you finally start getting opportunities. That’s the only way to rise above the pack. In being a comic creator, the financial risk that you take is enormous. The comic industry is very unpredictable, and marketing a graphic novel is very difficult. It’s a matter just barreling through, doing the work, going to the conventions, meeting editors, getting to know the culture. If you can stick the landing through all of that and have a finished product that lands at a publishing house, at the end of the day, you have accomplished what something like 1 percent of people have done. I think if you believe in what you’re doing, you can never really completely fail at it. Having a book on shelves is a success. It doesn’t have to sell as much as the other person’s book. Just having it at market is a triumph. I will tell you, when I released MORIARTY and RED CITY through Image Comics, many producers and studios came knocking, and no one asked how many units we sold. What impressed people at the very top of the film and TV business was the fact that I had finished a product and established it in the marketplace. What it really comes down to is creating a brand. If you risk your all, your everything in creating a unique and tangible brand, at some level, you are always going to turn heads and have success in some form. 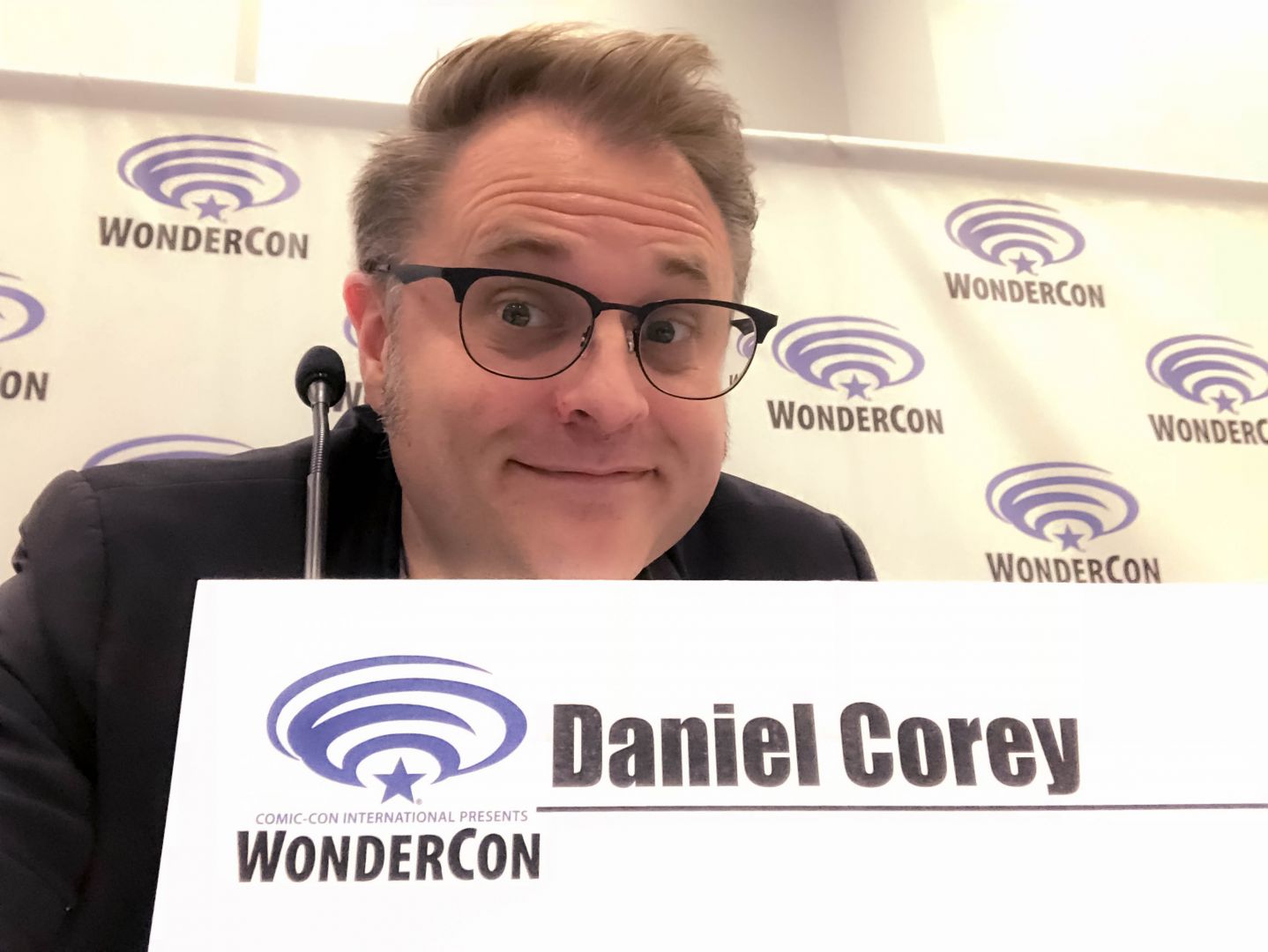 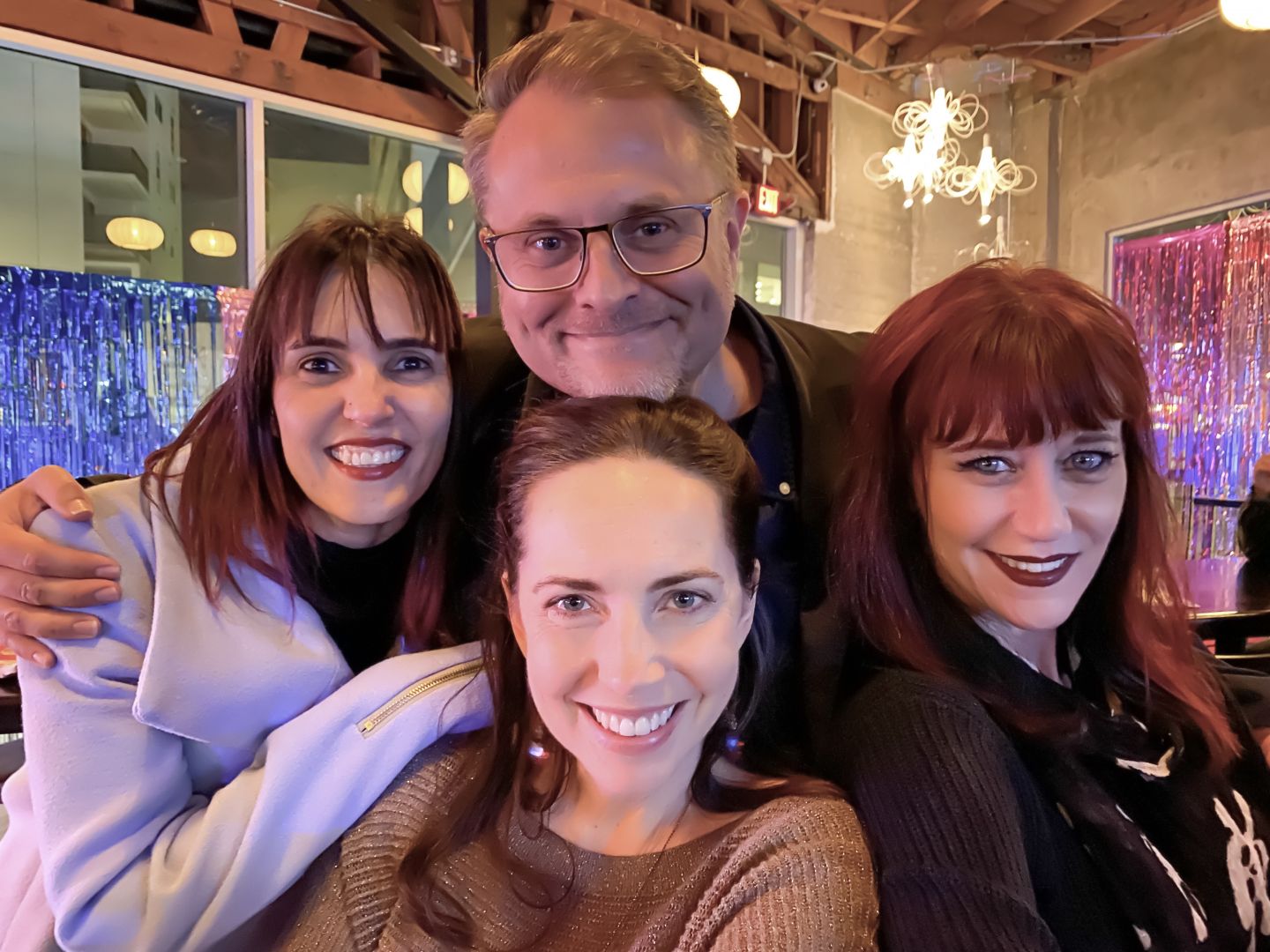 Can you open up a bit about your work and career? We’re big fans and we’d love for our community to learn more about your work.
Nothing is ever easy! My wife and I moved to Los Angeles in 2003, and all that I knew was that I wanted to be a writer and participate in some way in the realm of film/TV/theatre/music. After a few years of settling in, I started my company, DangerKatt, as a means of unifying all of my creative endeavors. DangerKatt has given me brand, product, and identity. I started creating my first graphic novel, PROPHET, with artist Anthony Diecidue under the DangerKatt banner. From there, we want on to create MORIARTY, which was picked up by Image Comics, who are best known as the home of THE WALKING DEAD. In 100 years of Sherlock Holmes adaptations, we had the first-ever MORIARTY comic. Because of that, I became “The MORIARTY Guy” to many readers. So, my role in the industry became IP creation, making properties that could go on to become the root for media franchises. From there, I went on to write RED CITY and BLOODWORTH, which opened even more doors. For the most part, my brand was defined through comic creation. In 2017, I teamed with Transmedia Entertainment to adapt MORIARTY to a first-of-its-kind VR comic book experience titled MORIARTY: ENDGAME VR. That project landed me on the #2 spot of Onalytica’s Top 100 VR Influencer list, something that I never thought would happen. So, I started to become known as a sort of VR visionary. For the past few years, I have added music and photography to the DangerKatt umbrella, which has widened the scope of where you’ll find me on any given day, whether it’s Downtown L.A. shooting architecture, or a rock and roll show, or interviewing artists at the NAMM convention. Lately, I have noticed that many people just call me “DangerKatt.” So, the company became a brand, which generated various products, which became an identity. I do a lot of things, meet a lot of people, and after 18 years in Los Angeles, I have carved out a niche or two for myself. Which, again, has NOT been easy. But it’s been a great ride. 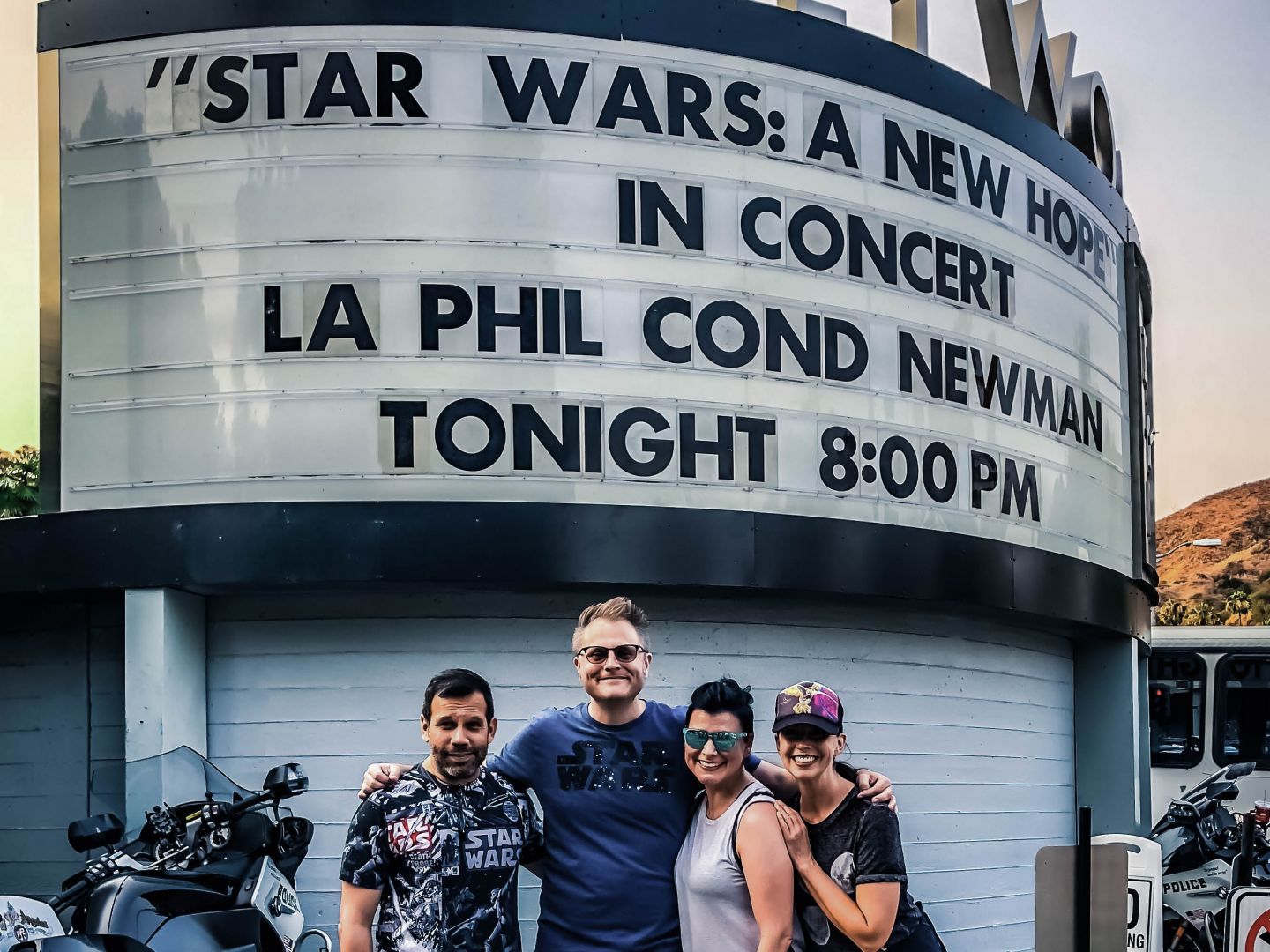 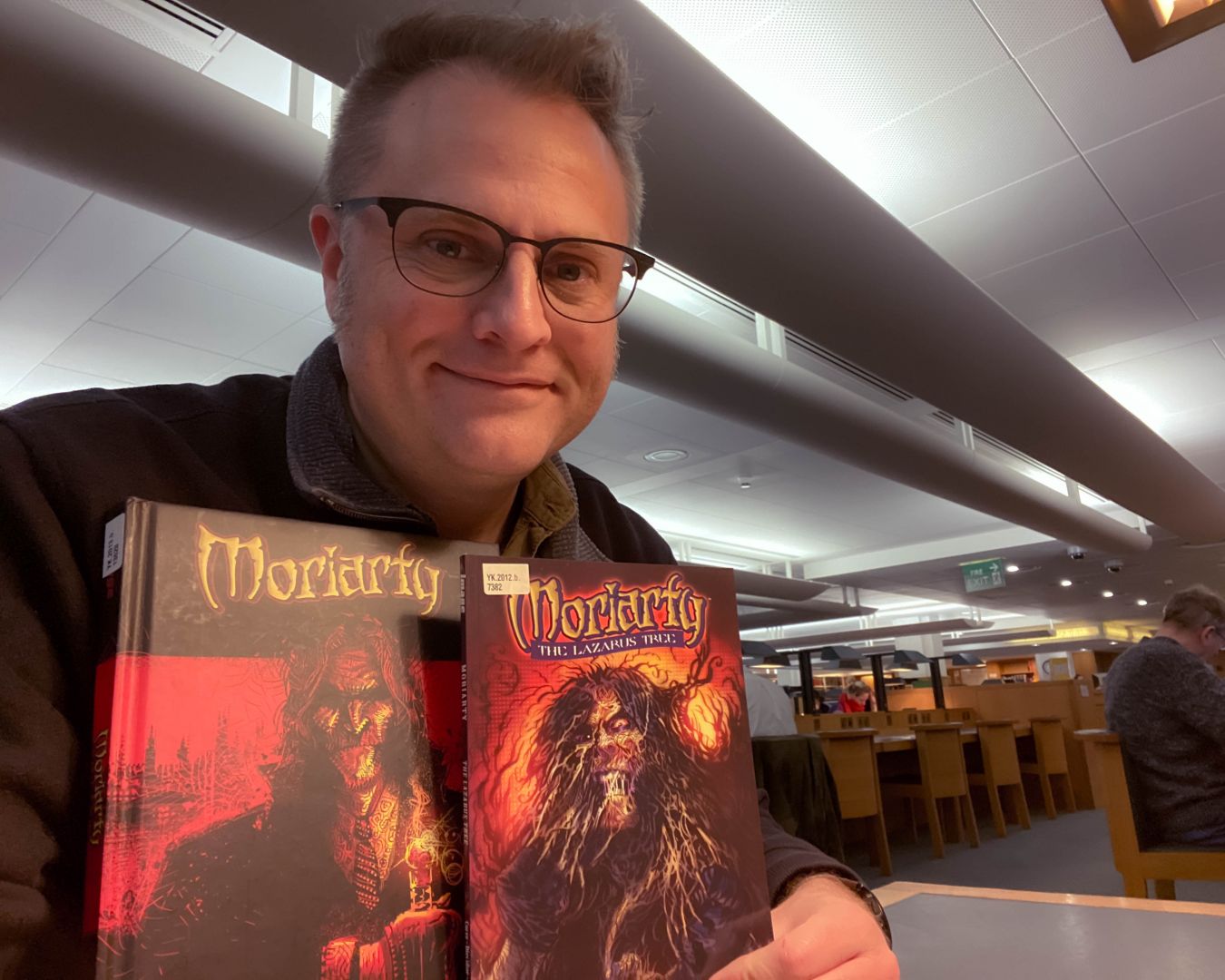 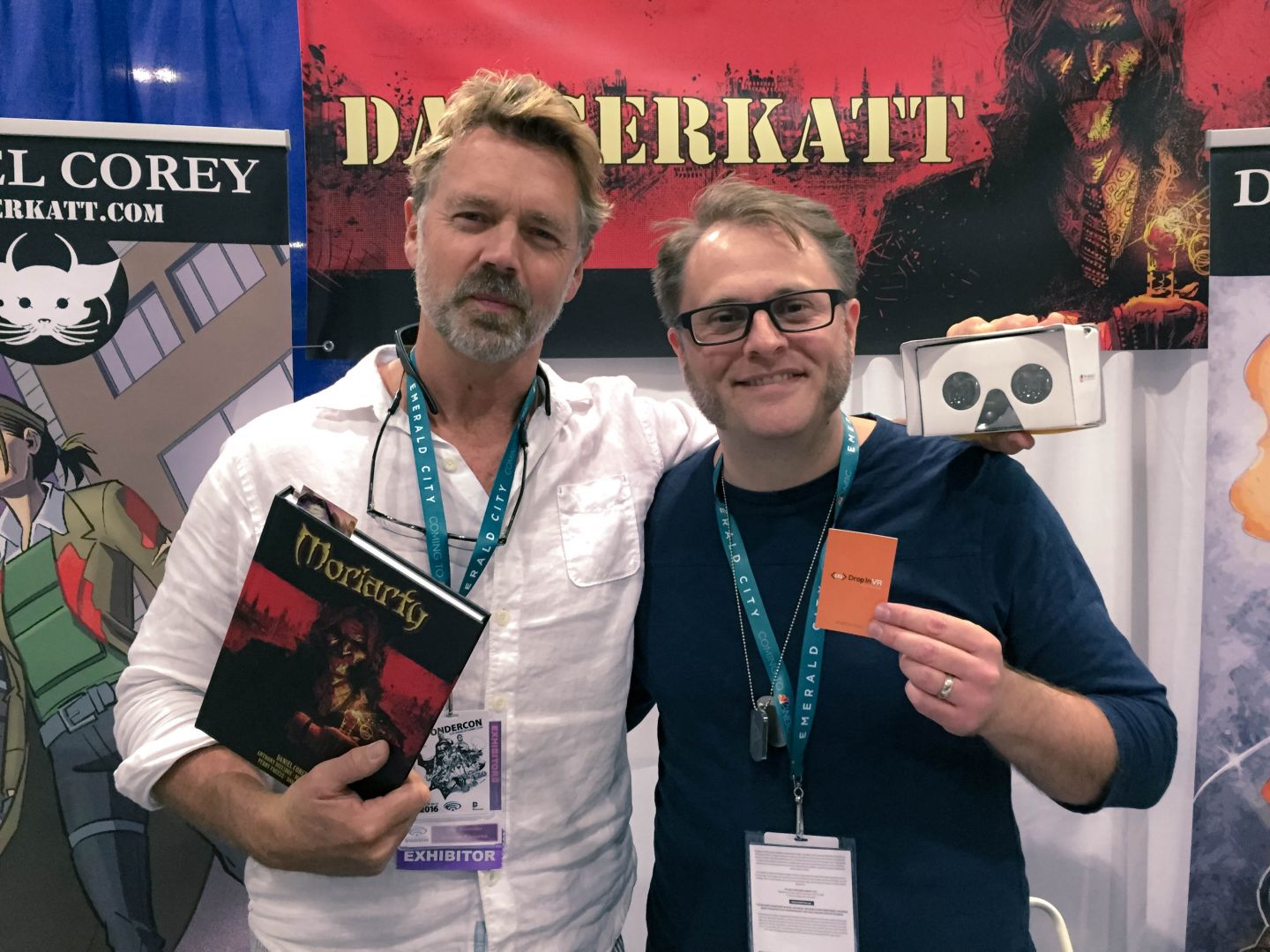 If you had a friend visiting you, what are some of the local spots you’d want to take them around to?
Well, we’d visit some of my favorite film locations: The Bradbury Building on Broadway from “Blade Runner,” as well as the Downtown Central Library and the 5th Street location of the shootout from Michael Mann’s “Heat.” We’d go up 70 stories and enjoy the vista view of the city from Skyspace L.A., atop the U.S. Bank Tower. We’d see a rock show at The Whiskey, visit the Third Street Promenade in Santa Monica, check out The Getty Center, peruse the Miracle Mile and LACMA grounds. Check out the killer robot and toy shops in Little Tokyo, and then we’d probably relax by taking in a Q&A screening at the Egyptian Theatre in Hollywood. 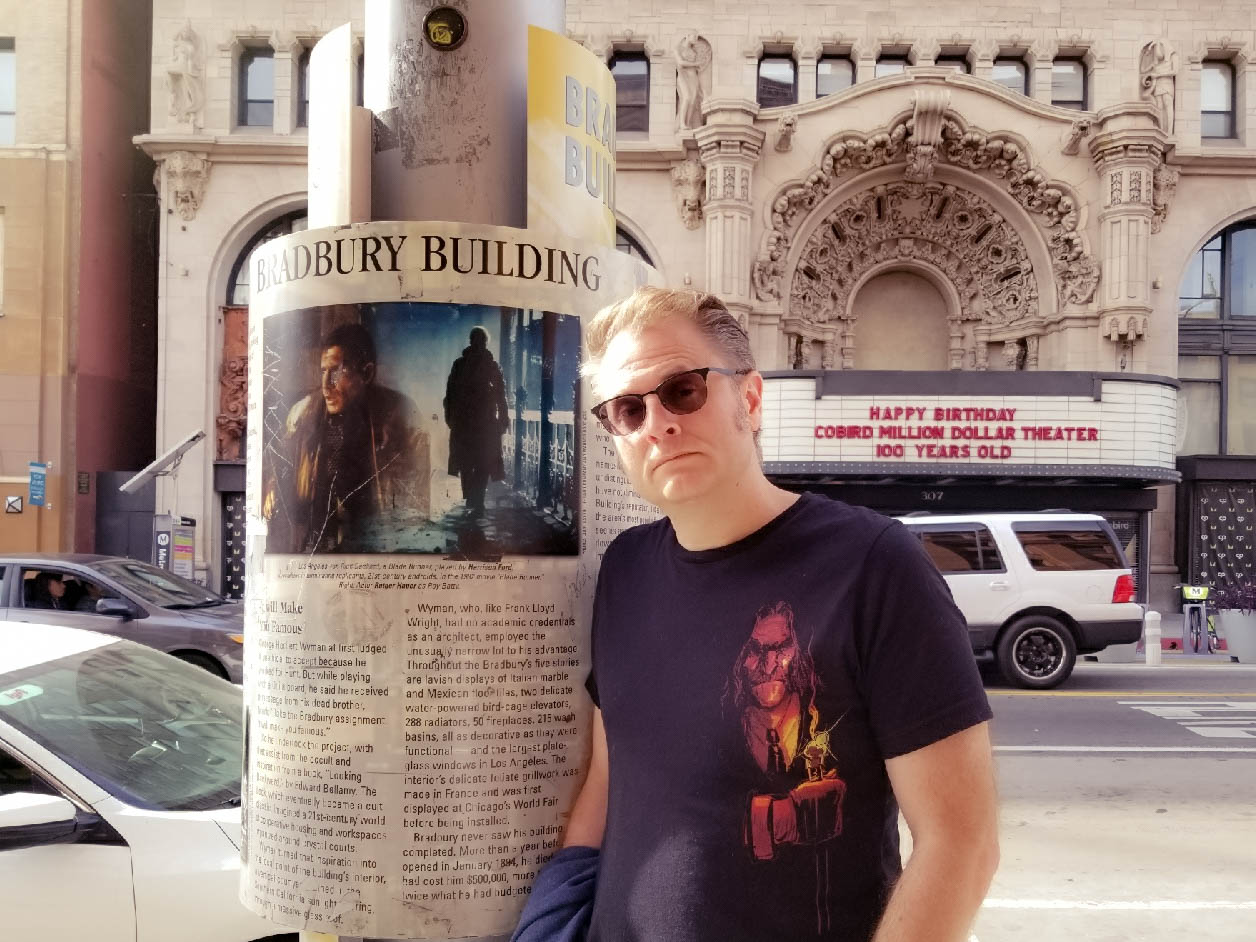 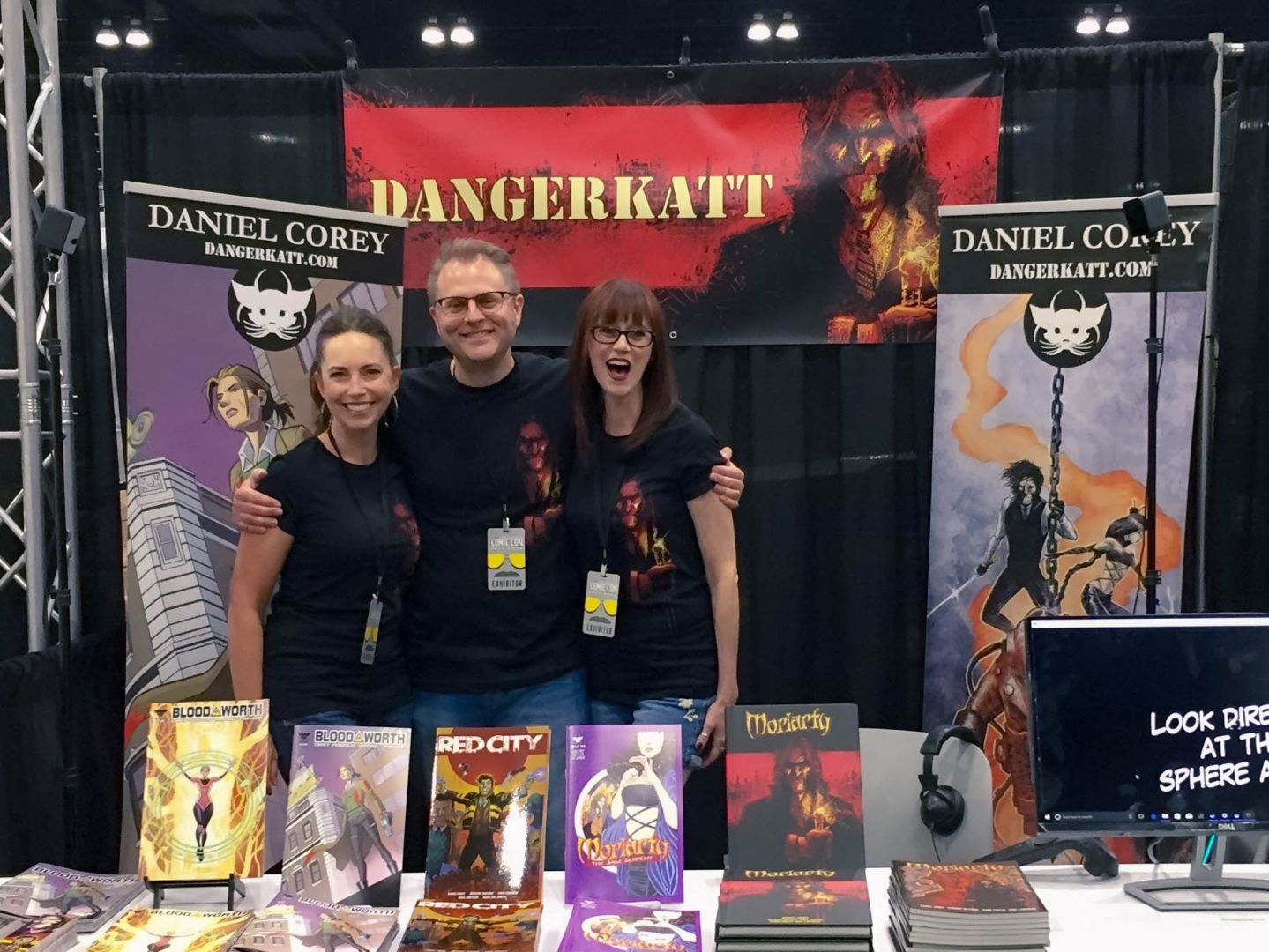 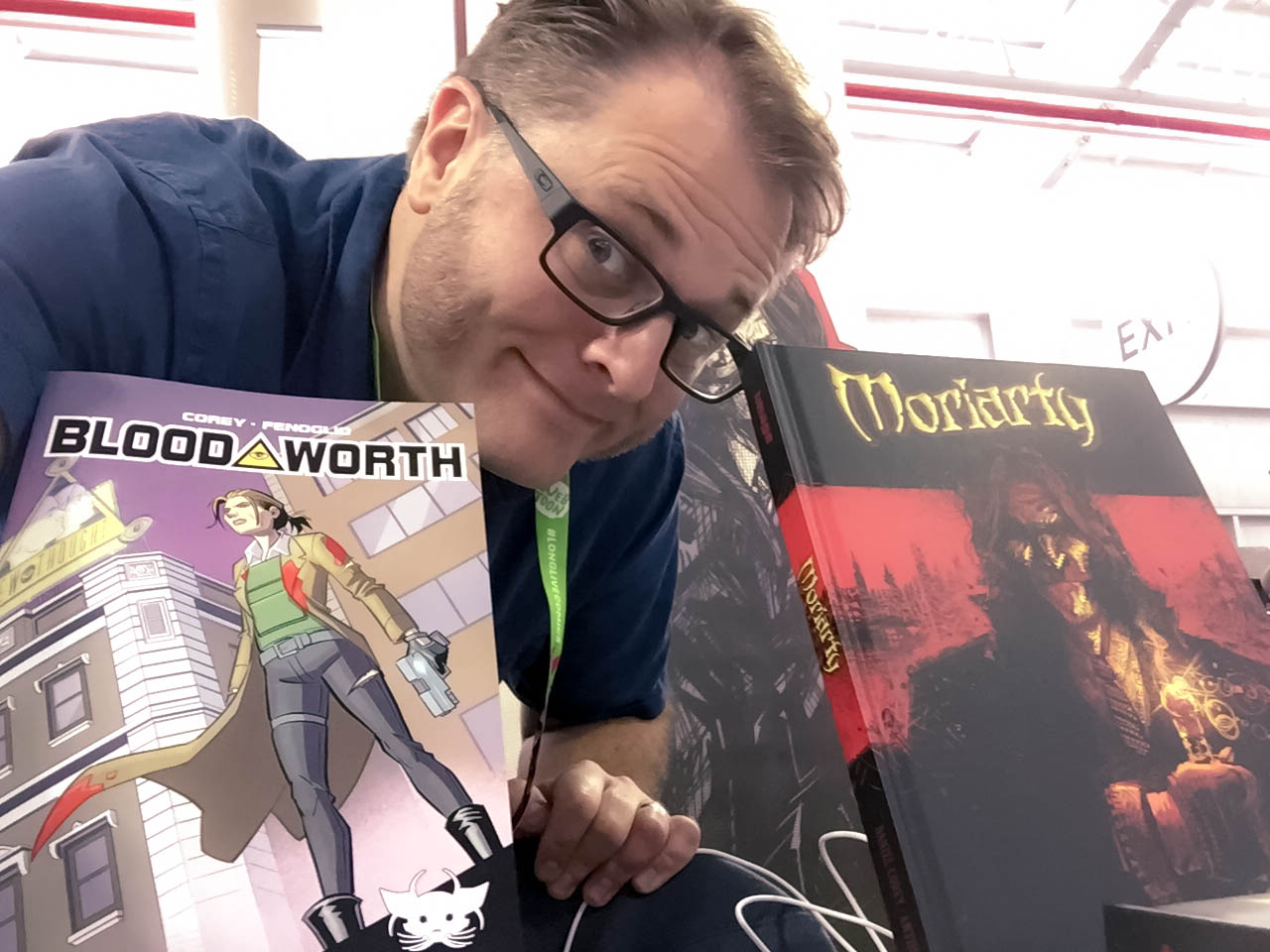 Who else deserves some credit and recognition?
Huge influences in my life and craft include people like Alexx Calise and Dennis Morehouse, aka Batfarm, who are two of the hardest-working rock musicians you’ll ever meet. There’s Anabel DFlux, who mentors me in photography. Filmmaker James Cotten, who helps me navigate the film business. My managers David Server and Ray Miller at Archetype, who are always looking out for me. Musician and producer Daniel Lanois and all of his albums have had a profound influence on any work that I’ve done, and earlier this year, I was happy to get to meet and interview him about his body of work. There’s Laurel Harris, who is the hardest-working actor I’ve ever met. Singer Andie K with her constant commitment and friendship, and Ken Eulo, my foundational mentor in acting and writing. My alma mater Full Sail University is always giving my opportunities to mentor new writers, and is always cheering me on in my various projects. And my wife Brenda, who loves me and tolerates all of this. 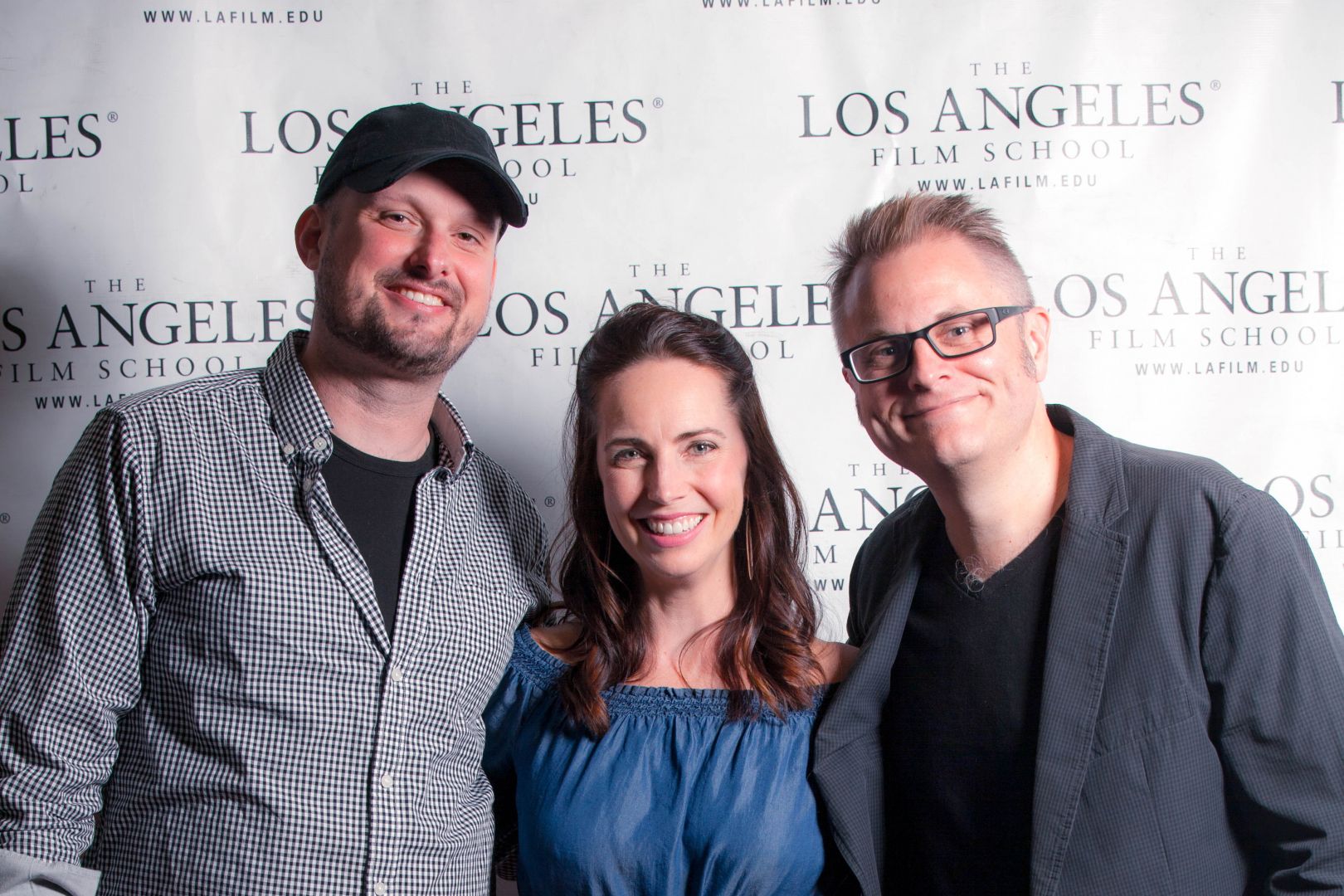 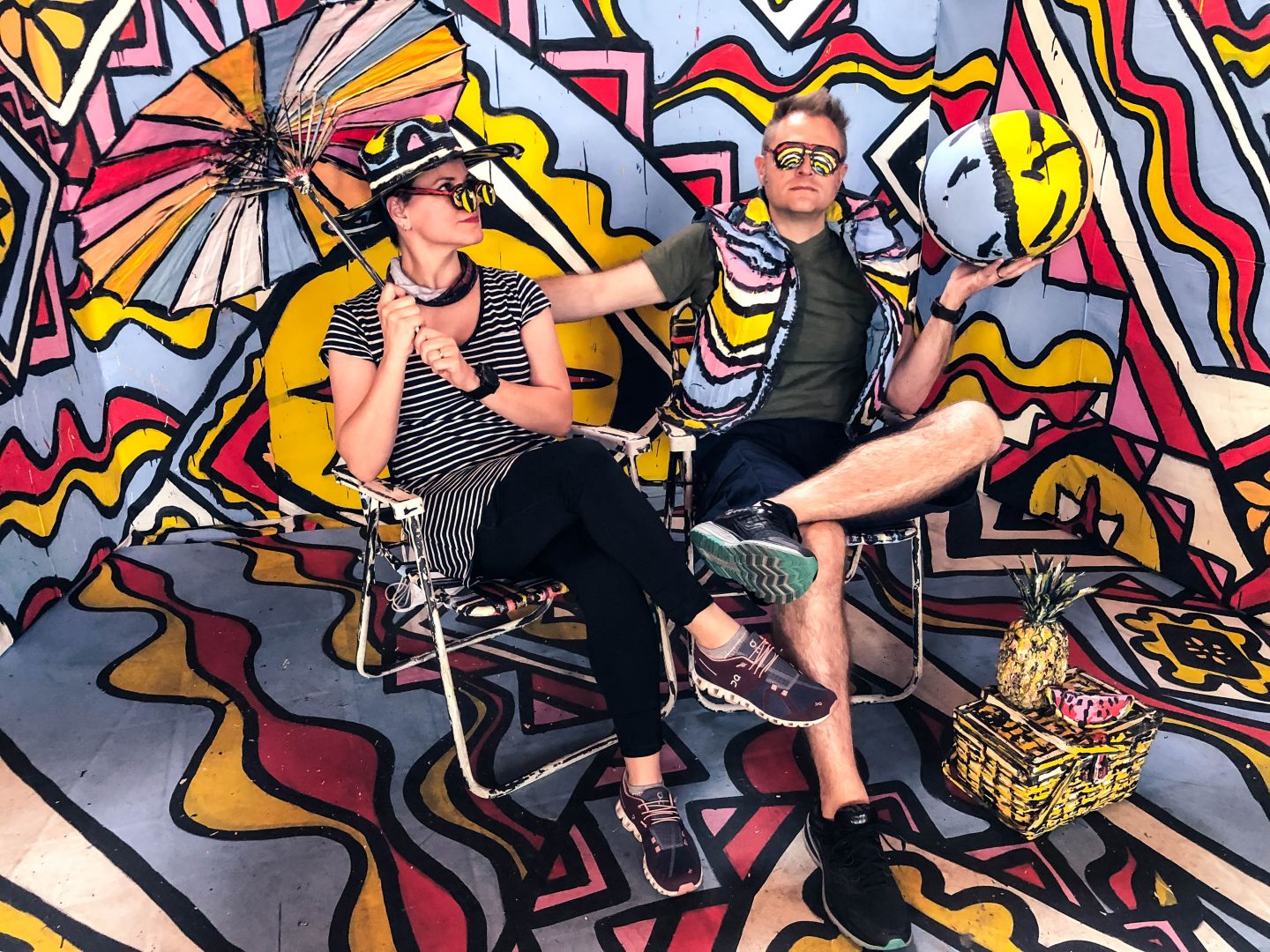 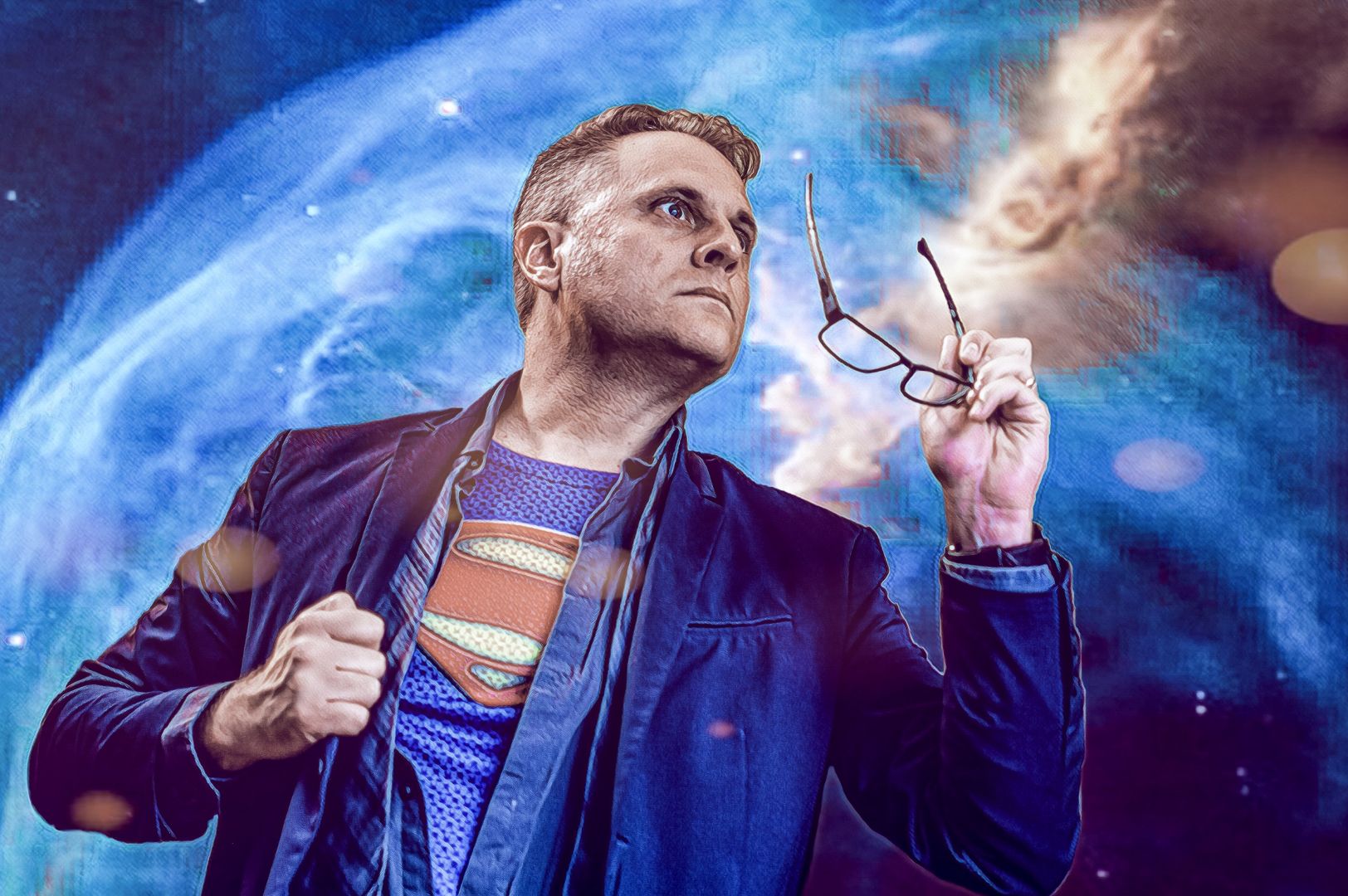