We had the good fortune of connecting with DD Horns and we’ve shared our conversation below.

Hi DD Horns, can you walk us through the thought-process of starting your business?

We met at UCLA, where we were both Music majors. David was studying jazz performance and saxophone, and Danny was studying composition and trumpet. We had the same music theory and music history courses and were a part of an incredible class of musicians. We eventually became roommates, and would frequently have jam sessions focused on free improvisation. After graduating, we built our brand as a go-to horn section in the LA studio session scene, working on recordings by Iggy Pop, Regina Spektor, Snoop Dogg, 21 Pilots, Matt Nathanson, Hanggai, Chika, Rilo Kiley, Diplo, Once In Future Band, Anonymous Inc. and tons more. We’re still active session musicians, and each operate our own home recording studios. Through our experiences as session players, we learned to really trust each other’s musical sensibilities in a lot of different musical contexts, and our sense of phrasing together began to really deepen.

In 2016, we decided that we’d like to try to form our own band to give an outlet for writing, recording, and releasing our own music. We also wanted an outlet for writing arrangements based on music that inspires us regardless of genre. David had just returned from a trip to Japan, where he was inspired to see our UCLA classmate Kamasi Washington’s album for sale at Tower Records. Danny, who is constantly writing music, had just finished some compositions that seemed well suited to a quintet featuring trumpet and tenor saxophone as the lead voices.

Because we play those instruments and we are heavily influenced by jazz, the music we create naturally tends to veer in that direction. Also at the time we had been doing a fair amount of work in the indie rock/folk/pop world, and so we decided to make an album of instrumental music that fused those two worlds.

We recorded our self-titled debut album, DD Horns, in 2017. One thing we were really proud of is that it was tracked live with no overdubs, edits, comps or studio trickery. That record, which featured originals and cover versions of tunes by The Arcade Fire, Vampire Weekend, and The Magnetic Fields eventually won accolades for Best New Jazz on Bandcamp, some really positive reviews. We got airplay from Gilles Peterson’s WorldWide FM LA to Portland, Oregon’s jazz station KMHD where we were also included on their year-end Best Of Spotify playlist.

In town prior to the Covid pandemic, we played regularly at The York in Highland Park and Grand Central Market’s jazz series, and have played at The Blue Whale, The Eagle Rock Music Festival and a bunch of other local venues and outdoor spaces. It’s been really great for us to get to work with so many different amazing musicians in our live performances, including guitarists like Blake Straus, Molly Miller, Miles Jensen and Josh Lopez; bassists JP Marmaba, Corbin Jones, Jon Flaugher, and Anthony Shadduck and drummers Michael Villiers, Henry Was, Chris Lovejoy and Marcelo Bucater. We are really looking forward to the return of live music so that we can get back to performing for audiences and sharing our musical vision as soon as possible.

After a lot of planning, writing, and arranging, we went into the studio this past July to record. We spent one long day at Valentine Recording Studio in North Hollywood, and ended up with enough recordings for two records, the first of which is going to be called ‘Cali Shine.’ We’re currently in the process of mixing the records, and are are really proud of the way these recordings turned out. 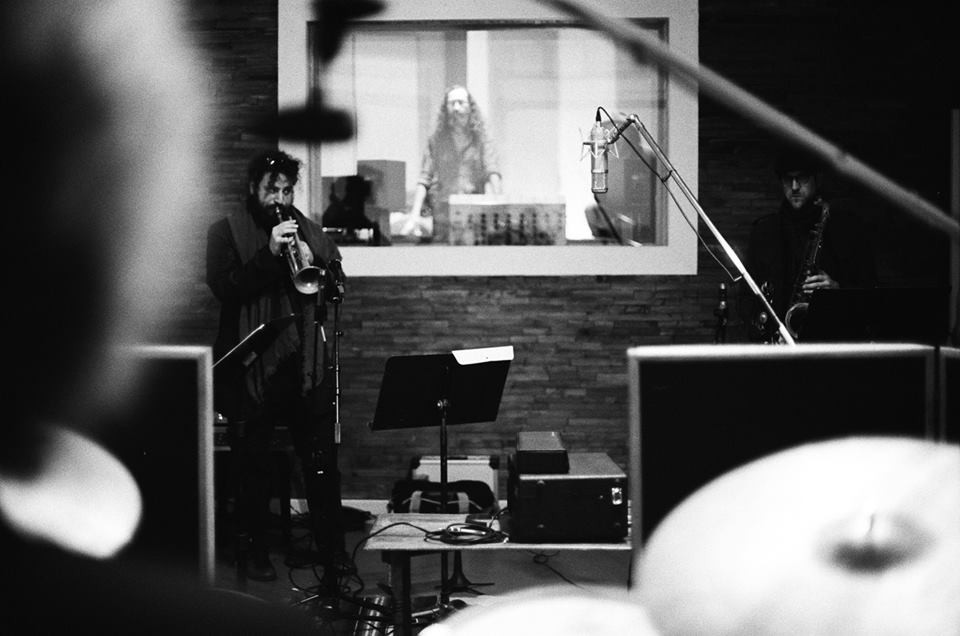 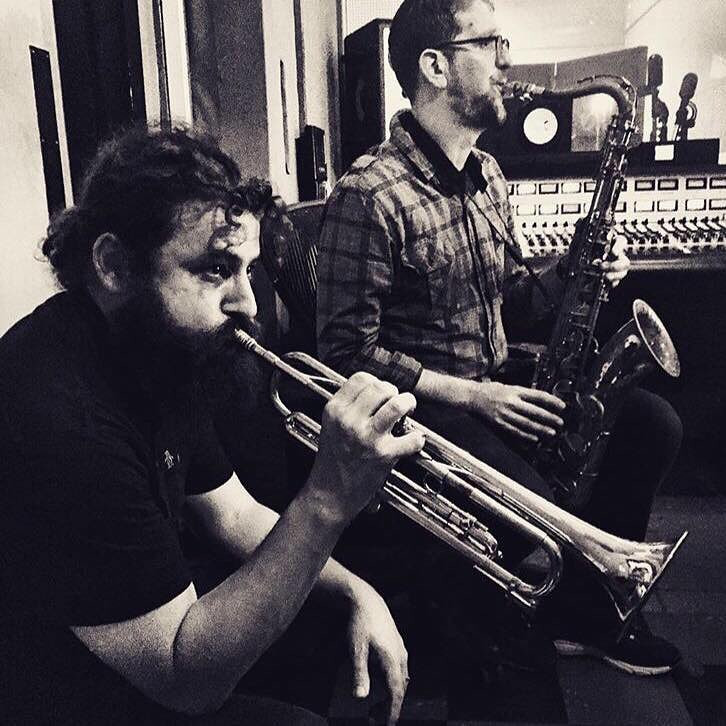 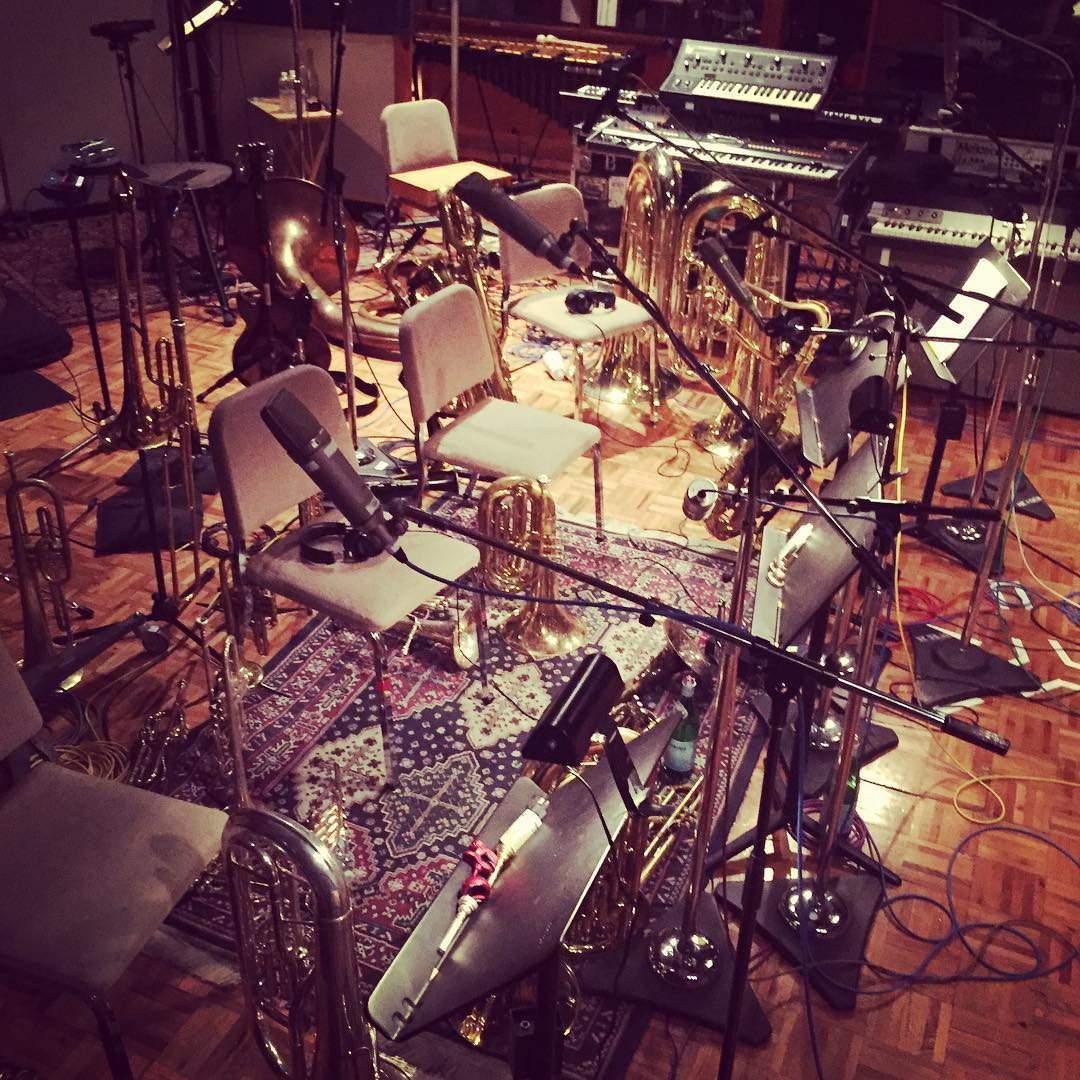 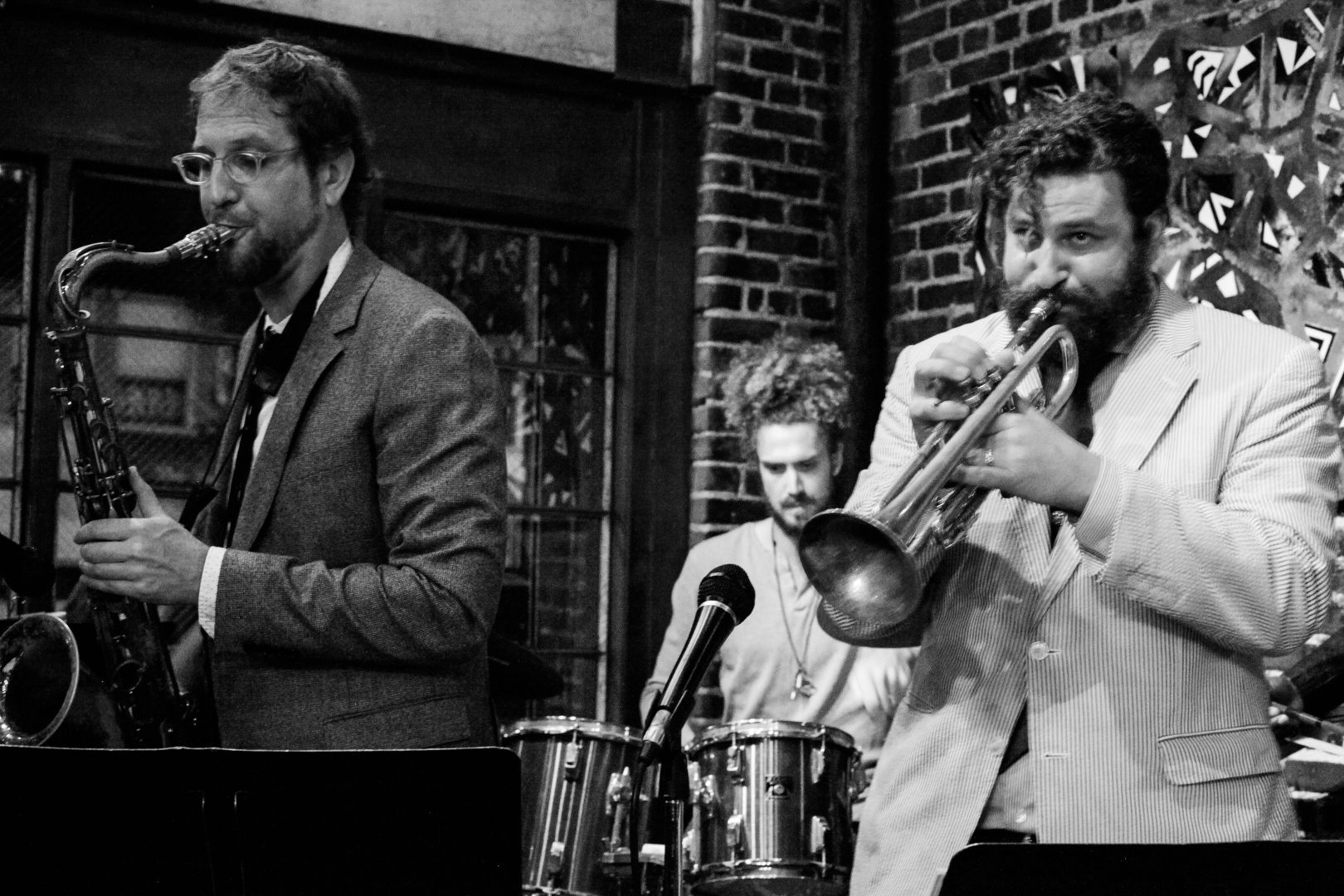 Alright, so let’s move onto what keeps you busy professionally?
We are a horn section and we have two main areas of specialization. The first is multi-track recording. We both have backgrounds in arranging and some production and songwriting experience, so we are able to bring all of those perspectives into any recording session we do in addition to our skills as instrumentalists. Danny plays brass instruments and David plays woodwinds. Between the two of us, we can add trumpet, cornet, flugelhorn, frumpet, alto horn, trombone, bass trumpet, flugabone, trombonium, euphonium, soprano sax, alto sax, tenor sax, bari sax, flute, clarinet, recorder and bass clarinet to any song you may have.

We both have recording studios with quality high-end gear that we’ve been using for years, and we can turn around big recording projects very quickly. Because there are only two of us, and we play so many different instruments, we are able to offer a very high-quality product with a lot of flexibility in pricing. Most horn sections require you to hire at least three people, who each play one instrument and then pay an additional fee for them (or someone else) to arrange the music ahead of time. We can work the parts out with you on the fly the first time we hear the song, and within 10 minutes of our first listen, be in the tracking room starting to record them.

The artist doesn’t even need to have a specific idea of the horn parts they want – they can send us a song and we’ll send it back with great-sounding, stylistically appropriate horn parts, regardless of genre. Soon we will begin releasing sample packs as well, which will introduce another option to get our sound on your track at a lower price point.

That said, I think we are best known for our sound. Danny mostly plays a vintage large bore Martin Committee trumpet (same kind played by Miles Davis, Chet Baker, Dizzy Gillespie) and I play vintage Selmer Mark VI saxophones (John Coltrane, Wayne Shorter, Stanley Turrentine), so anything we play in unison instantly has a classic, identifiable sound to it. Because we’ve been playing together so long, we’ve really developed a synergy in our phrasing and melodic approach.

DD Horns the band, really exists to showcase this sound. A lot of the melodies we play are in unison because there is a unique quality to both of us playing the same thing at the same time that exceeds the sum of its parts. While our efforts as composers, arrangers and improvisers are all crucial to the success of our project, our collective sound is the main attraction. 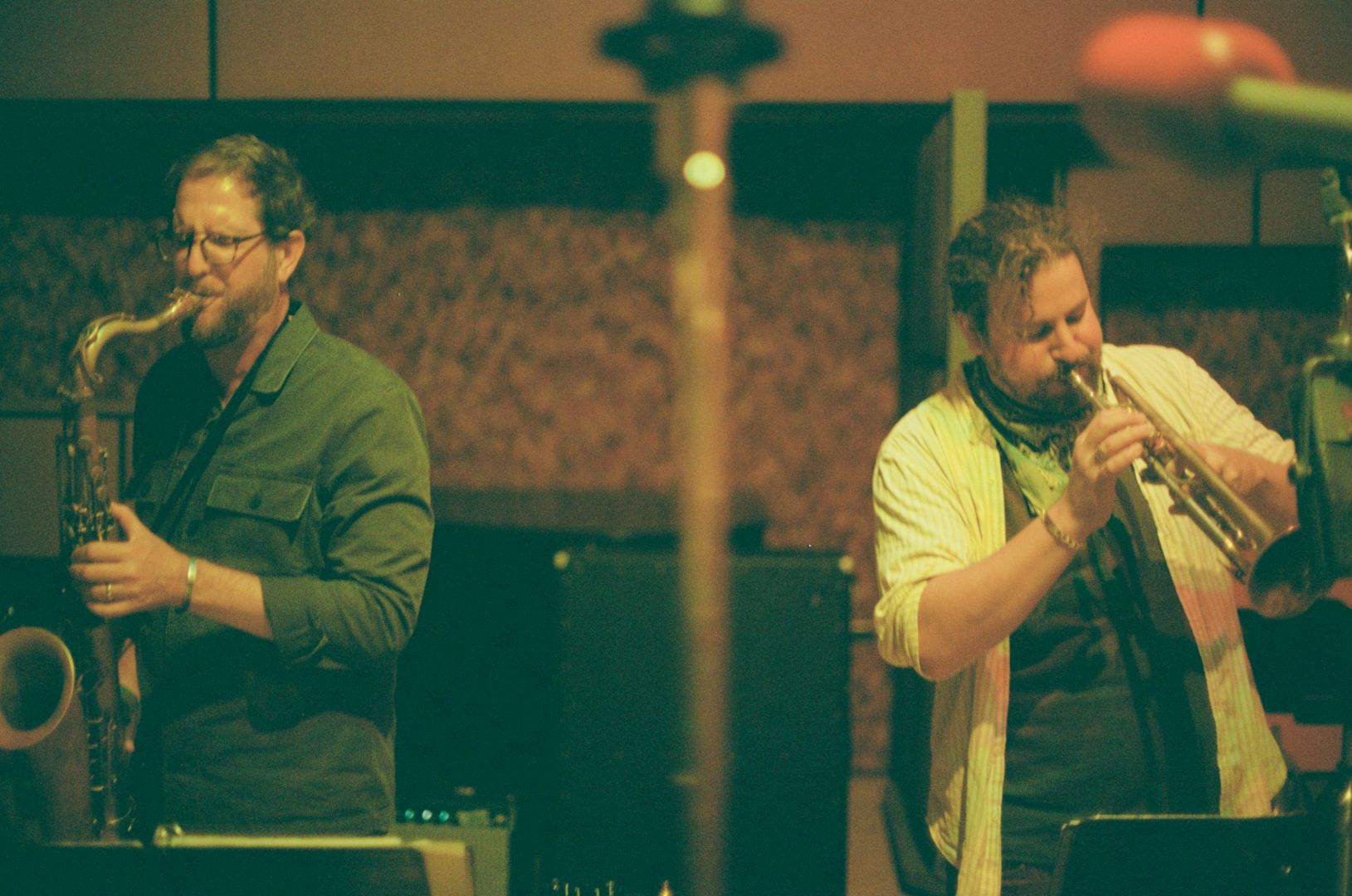 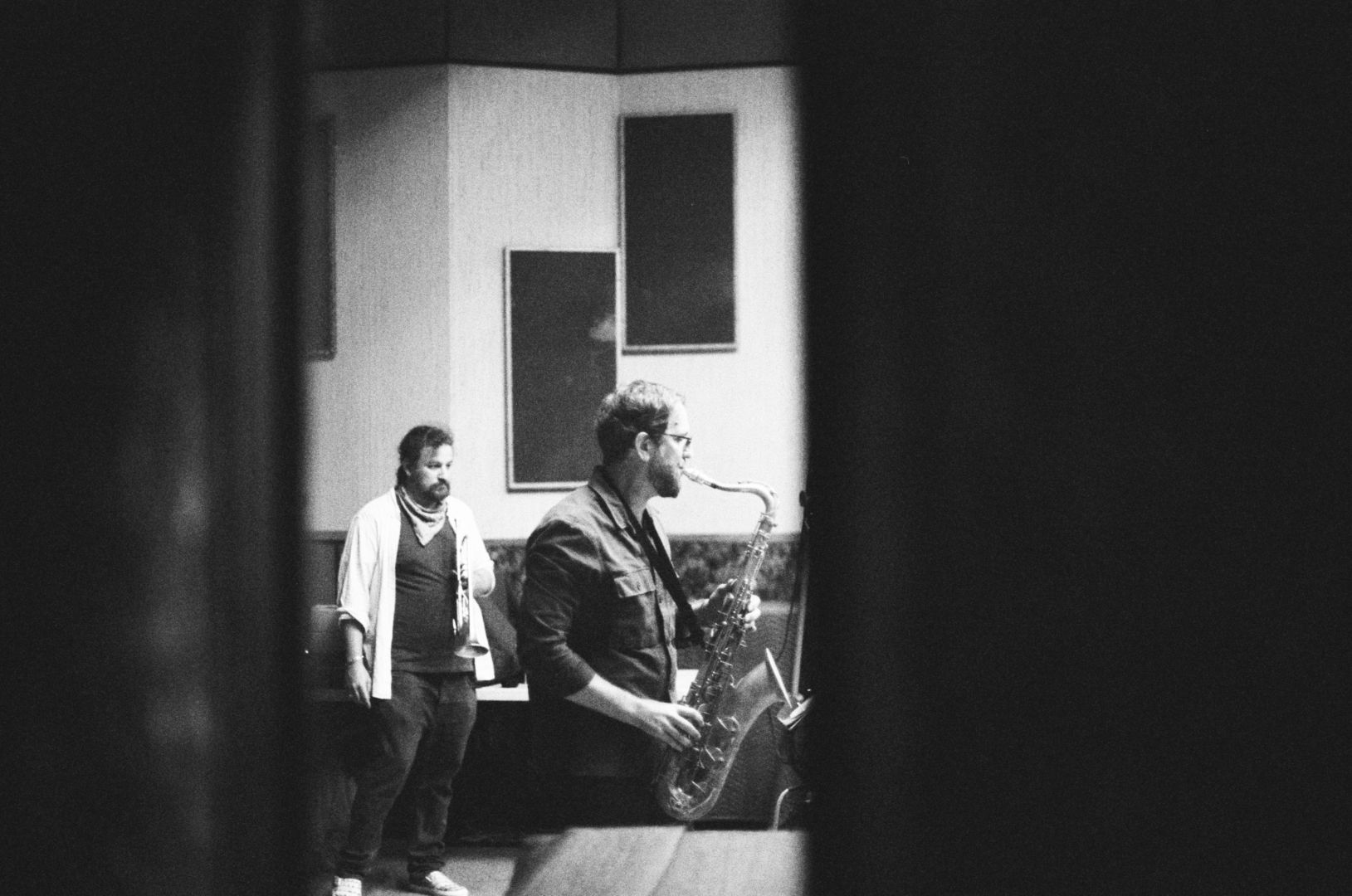 If you had a friend visiting you, what are some of the local spots you’d want to take them around to?
Great question! We’d want to show them all of the nuance that LA has to offer,assuming our best friend is interested in more than just the typical LA tourist itinerary of Hollywood, Venice, and Santa Monica. We’d start the day with a trip to our favorite coffee shop, The Conservatory for Coffee & Tea in Culver City. Its a family run business that roasts an exceptional cup of coffee, and the owner AJ is a musician with impeccable taste.

From there, we’d take a scenic drive through some of LA’s historied neighborhoods and give a little bit of an architectural/historical tour as we make our way downtown. This would include areas like Leimert Park, where we can dig into LA’s rich jazz history; Hancock Park, where we can talk about some early Hollywood history; and Koreatown, which we feel is a great metaphor for the vibrancy of current LA culture. Once we hit downtown, we’d go for a walking tour of Disney Hall, The Broad, and MOCA before grabbing some lunch at Grand Central Market. Hopefully this is on a Sunday, and we’d be able to check out one of the live bands that played there pre-pandemic. We’d hit some more walking, and try to make it through Chinatown, Little Tokyo, and The Arts District before hitting Thaitown for some Thai food at any number of great spots. After dinner, we’d head back to Danny’s home studio for a jam session.

The next day, we’d head out to Zuma Beach and some hiking near the Ventura County line via PCH. That day would be all about beach, nature, and hiking. We’d of course have to grab some street tacos for dinner. There’s a great birria taco spot that’s been parked near my house for a few weeks, so that may have to be the go-to. We’d head down to Inglewood to grab some beers at Three Weavers to cap off a great day.

After that, it would totally be up to us and whatever mood we find ourselves in, but a trip out to Joshua Tree, or over to the new Amoeba Records could definitely be in the plans. If we’re assuming that businesses and night life are open post-pandemic, we’d probably have to hit one of LAs jazz spots like The World Stage or Sam First. 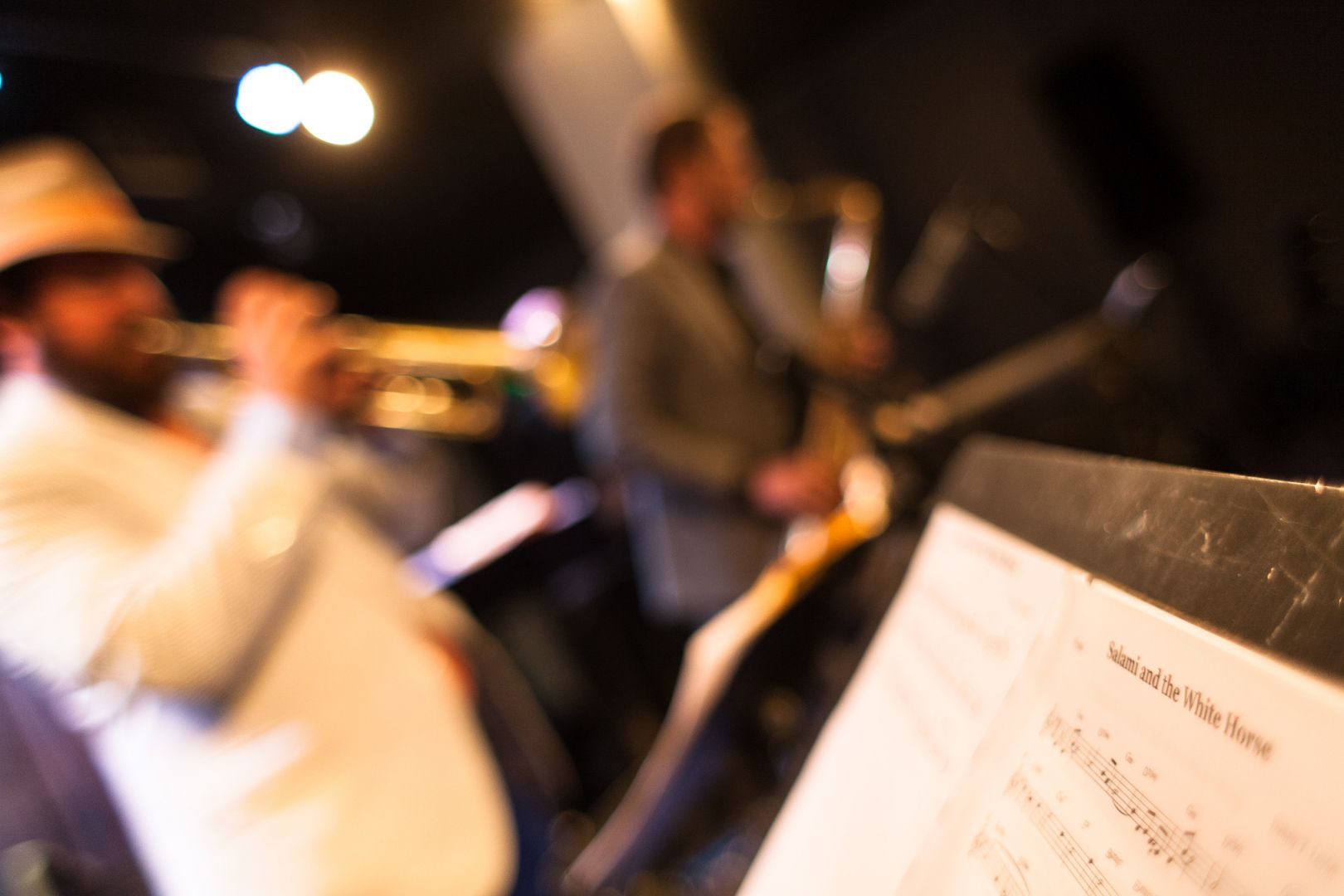 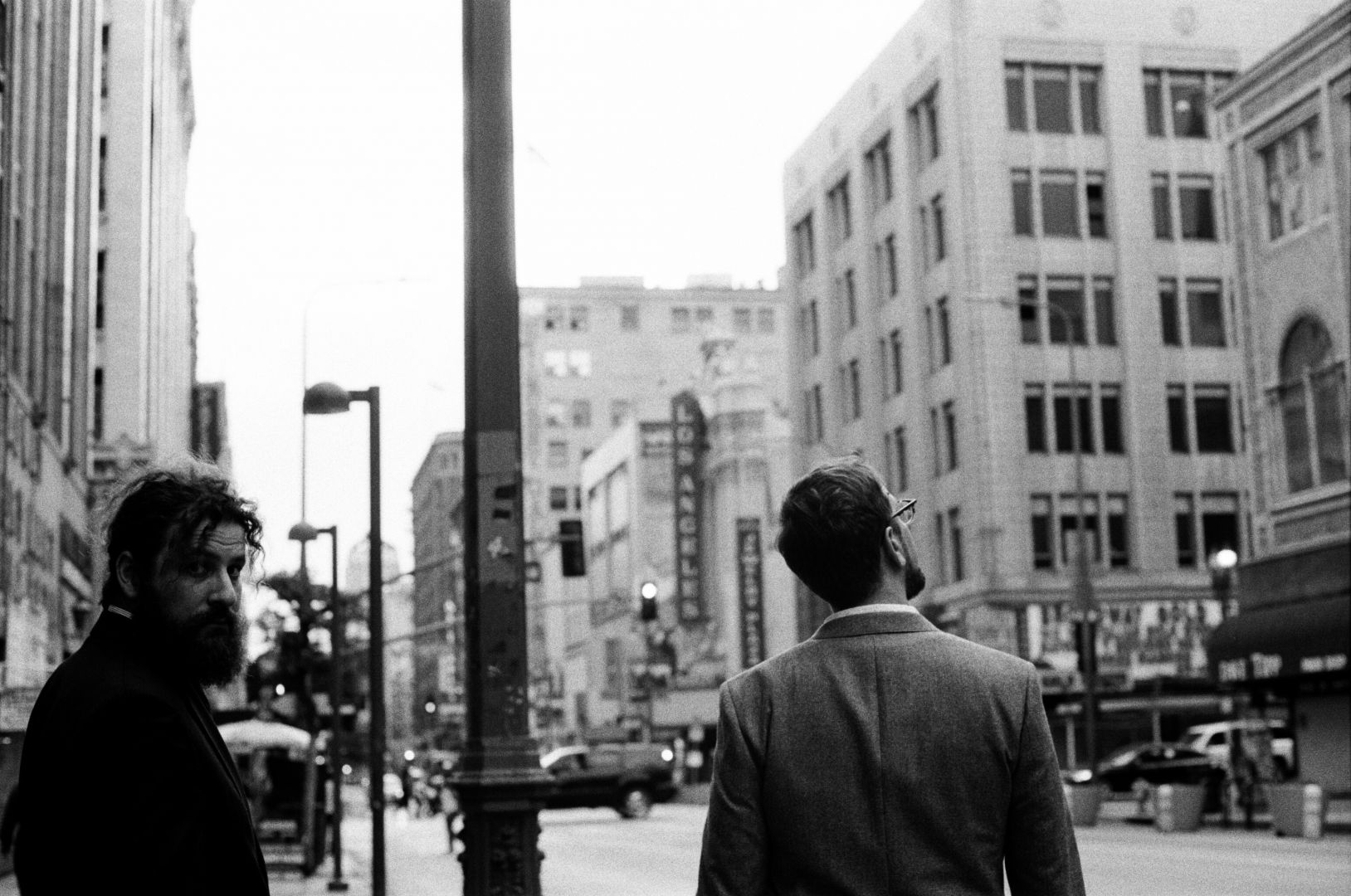 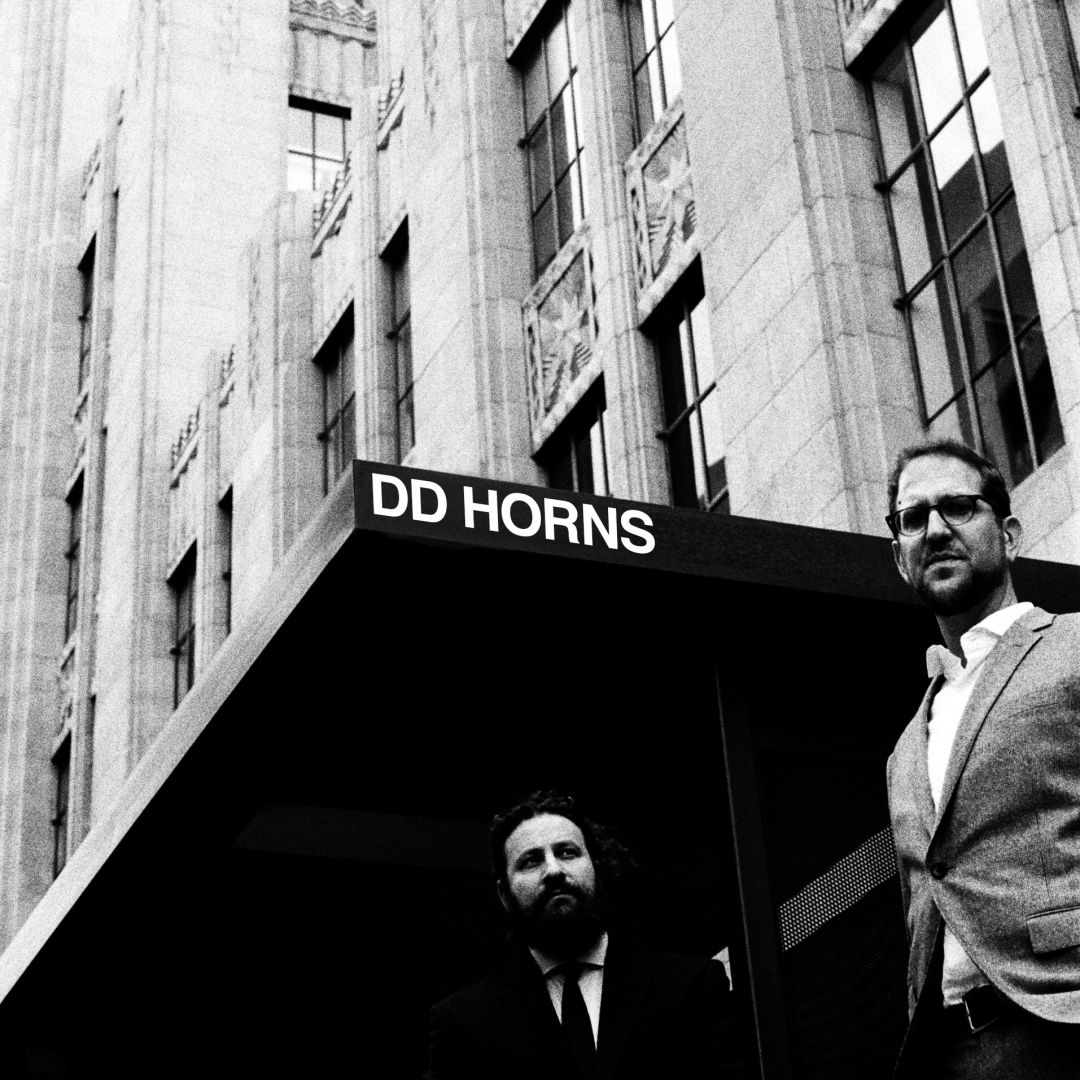 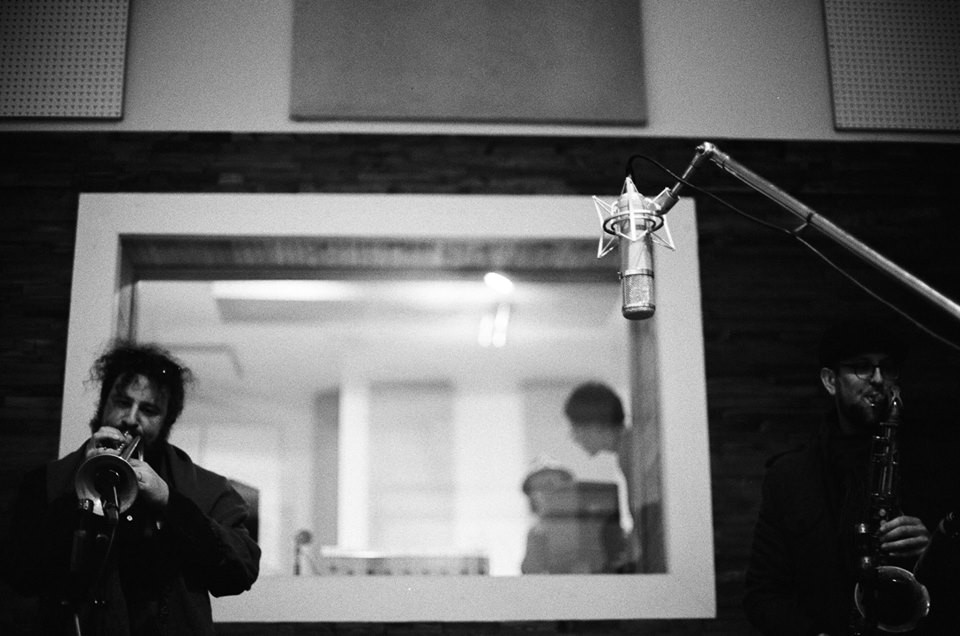 We’d like to shoutout The Harmony Project. Its a really terrific non-profit music education organization that we have both taught and led ensembles with for over a decade. The mission of The Harmony Project is to “harnesses the transformative power of music to increase access to higher education for underserved students by removing systemic barriers to achievement through academic and social support.” We feel really strongly about the power of music to transform and connect us, and The Harmony Project has allowed us to really put those beliefs into action outside of our own recording and performing.

There has been a lot of cross pollination between our work for Harmony Project and our musical path in DD Horns – both of us have performed original compositions and arrangements with our ensembles that overlap with repertoire we play in our shows and on our records. Danny’s first experience conducting an HP ensemble was subbing a rehearsal for David and leading the group through his composition Squiggly which appears on our debut record. David also arranged and conducted the 21 Pilots’ song that we laced with horns from their diamond selling Blurryface album, “Not Today” with an ensemble that Danny helped perform in. Danny has migrated many of his originals and cover arrangements including Fall So Hard, Obvious Bicycle and Book of Love back and forth between DD Horns and various HP ensembles. Danny’s song Sammy Lee, which will be on our next record, was named after one of the schools where HP had a program and both of us taught, written the night we found out that our program would be moving to a different location the following year.