We had the good fortune of connecting with LaCora Stephens and we’ve shared our conversation below.

Hi LaCora, why did you decide to pursue a creative path?

#God and #HBCULove. Look, I know Howard University gets a lot of props for their theatre alumni like Chadwick Boseman and Taraji P. Henson, but Florida A & M University boasts of strikingly talented stars too. For example, Will Packer and Anika Noni Rose. It’s where they placed their feet on the highest of seven hills in Tallahassee that my passion as an artist was developed. Not to mention, the FAMU Essential Theatre put on a phenomenal production of “Dearly Departed” my freshman year and I instantly fell in love. I saw it twice! After the show, I spoke to the director, Luther Wells and the rest is history. Now, prior to this I only flirted with theatre in passing and later dated him during my senior year of high school. Oh, and our little rendezvous in the church as I portrayed Pontius Pilate’s wife during the dreaded Easter Speech is when I actually was bitten by the bug. You know, young love. Or maybe it was the applause like Lady Gaga sang about; either way, I was smitten as a kitten, honey! The live audience, the dress, and tech rehearsals. The wardrobe, backstage shenanigans, inside jokes, tongue twisters, and warm-ups. I was there for it all, including the small knit family feel it brings. And I’m still close friends with several of my theatre major classmates til this day!

Being an artist encompasses passion, study, history, reflection, literature, lessons, medicine, movement, business, and technical. Not to mention the spectacle and beauty. I love it! Even when I hate it, I love it. I find myself up late still working at it, honing my skills, mad that it’s 2am, and I’m still going. Listen, once the arts have you, it has you.

Sounds like a lot, huh? Well, let me explain. I’ve said this before in another article but, my intention was to move to Hollywood and solely be better than Angela Bassett. Yes. That’s right. I grew up loving every film she was in. She played the heck out of those roles and had muscles just like me, so surely, I could do it too! Well child, Los Angeles was so expensive, I had to work full time. CUT TO: My first booked gig. It was a play, “Take a Giant Step.” It was great but it took up so much time from my day job as an educator. Then one day, after 4.5 years of working there, I just stopped. No, it’s not what you think. Nothing profound. Child, I was fired due to budget cuts. But don’t shed no tears for me because this forced me to get up, get out, and pursue my dream. I auditioned a lot, but didn’t book much. However, I did land a national commercial and auditioned for Patsy in “12 Years a Slave.” That’s right, Lupita’s role! Other than that, Hollywood kicked my tail. I was rejected a lot during this time, which is why I created and executive produced a local talk show to feed my artistic hunger. This was very different from my dream of whooping Angela Bassett’s tail in the box office, but I loved it! I loved not learning lines, creating segments, being in charge, and being me. This was the start of a beautiful hosting and producing relationship.

I am currently a host, producer, and filmmaker. My newest project is a collaboration with Lee Bailey’s EURweb and NubianTV, where I host a series entitled “Screen 2 Screen” directed and produced by LaRita Shelby. I’m currently developing a 6-8 episode unscripted series centered on faith. And my short film, “7 SHARP” is making its round in the festival circuit and recently won Best Short Film at the inaugural Leimert Park Cultural Film Festival! 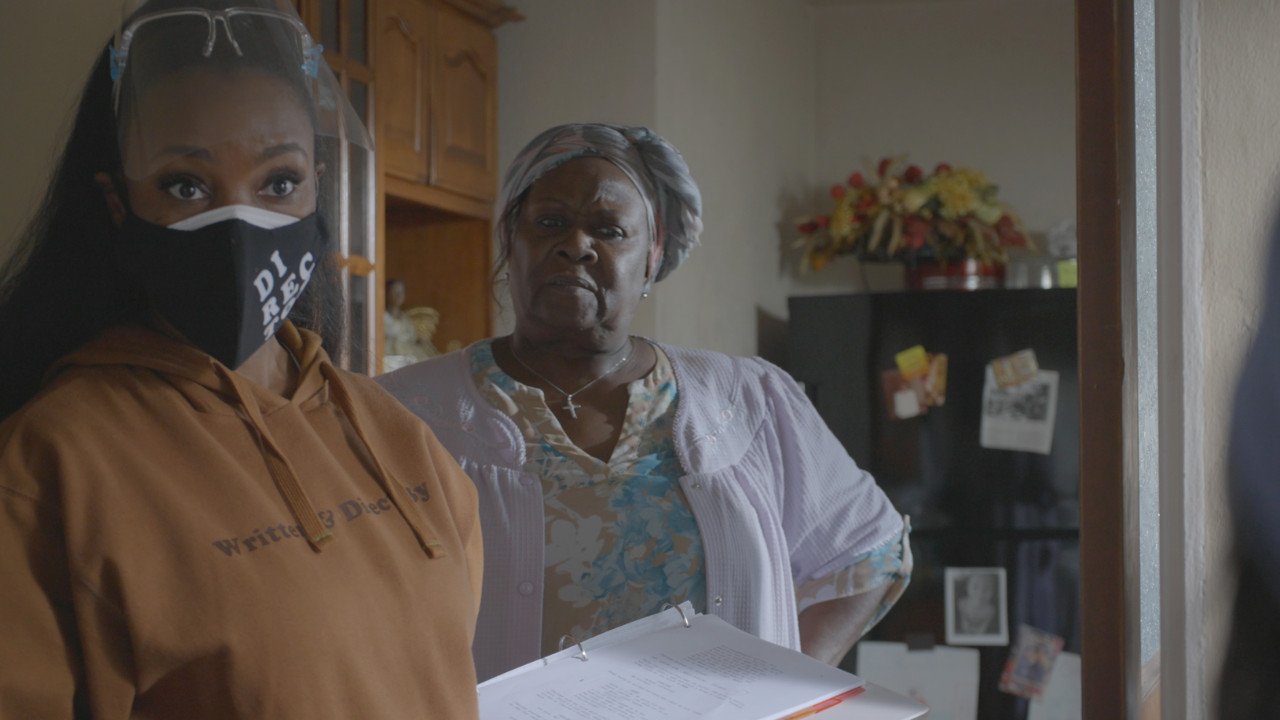 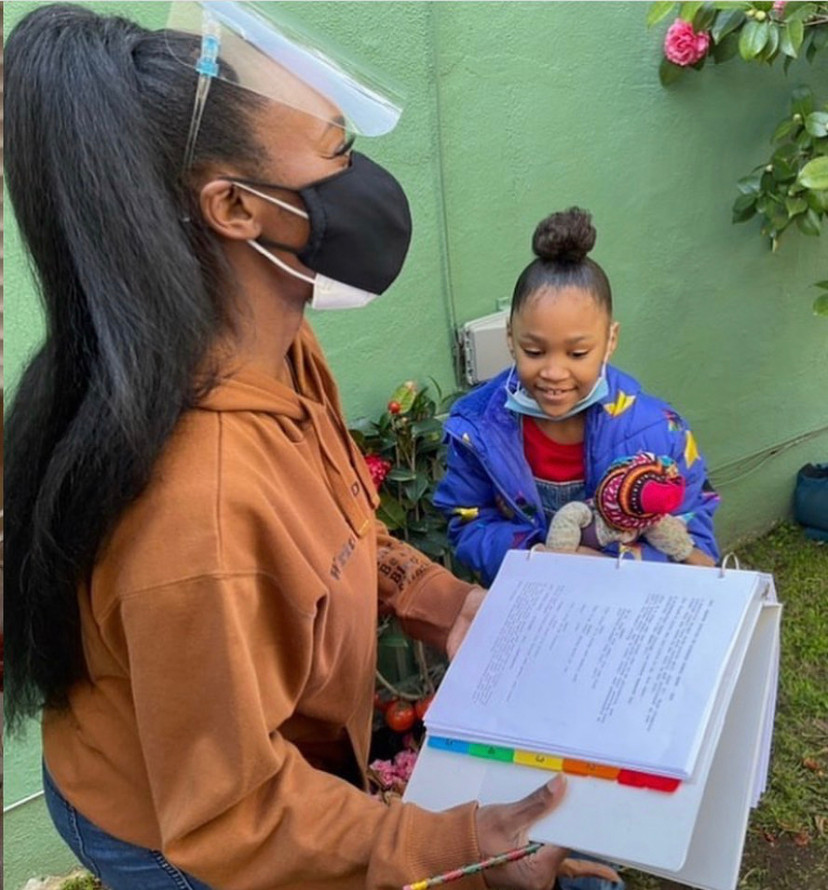 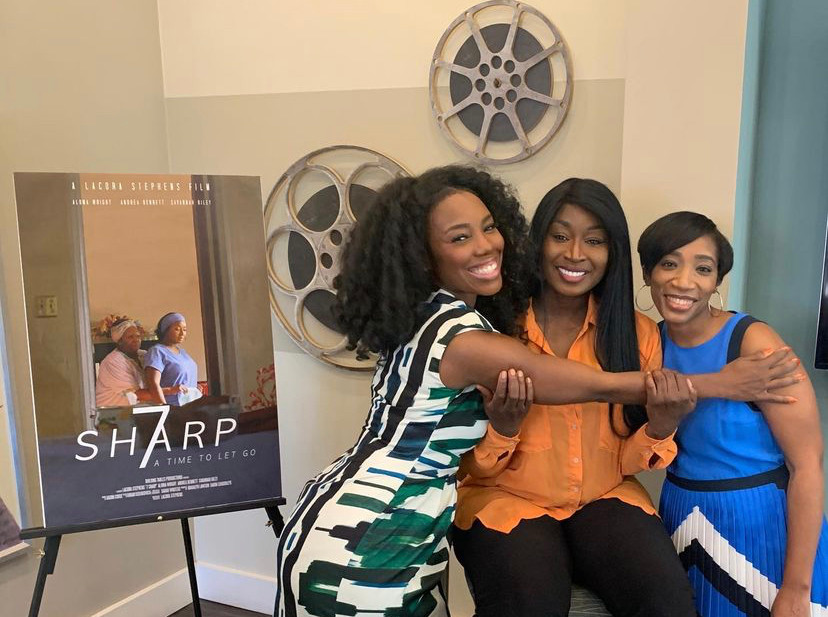 My art reflects me and my interests. It’s eclectic, ranging from personal stories told on film to faith and race discussed in a special series. My portfolio mimics most people’s music playlist. And come to think of it, my creativity is contingent on the times, my emotions, or ideas. I pull material from my life, the people around me, and an old journal of southern expressions or sayings from a former theatre class. However, one of God’s most beautiful creations is at the center of every genre that I create and that’s Black people.

My people are the original influencers.

The rawness of our walk, our laugh, our #blackboyjoy or #blackgirlmagic, the secrets of our grandmothers, and the wisdom of black men is what moves me to create. My special series #BlackMenTalk is powerful and thought provoking. My episodic talk series “The YES! Show” has been pretty successful with small network distribution deals. My hosting gigs on red carpets highlight the success, joy, and brilliance of Black Hollywood. And my newest award-winning short narrative, “7 SHARP” is a quiet and unsettling drama that channels rebellion and reverence.

I strive to highlight black people in honesty and share characters that are like your aunt, dad, or cousin, you know…regular folks with depth, growth, flaws, joy, and insecurities. Art is a beautiful form of medicine, and it’s also my passion. I use art to tell stories that will provoke dialogue and ultimately: create solutions.

Being in the industry helps you discover some hidden gems for shoots and for a good time. Not to mention noteworthy Instagrammable locations. Four of my projects have been shot in Pasadena! My original talk show “The YES! Show” was shot near Old Town, so that definitely can be the first stop for food. A project I produced entitled “Brown Paper Bag” was near the Paseo Mall for shopping! My fashion lifestyle show, “Church Glam” was set in front of the very famous Ombré Wall at ArtCenter South Campus for a viral Instagram moment! Last but not least, my short film “7 SHARP” was shot near Perry’s Joint which is a black owned sandwich shop that’s perfect for on-the-go touring food. And how apropos would it be for me to be the tour guide since I moonlight as a host from time to time!

Who would have thought that my production resume can serve as a touring itinerary? Producers…the unsung heroes of Hollywood, have a solution for just about everything! 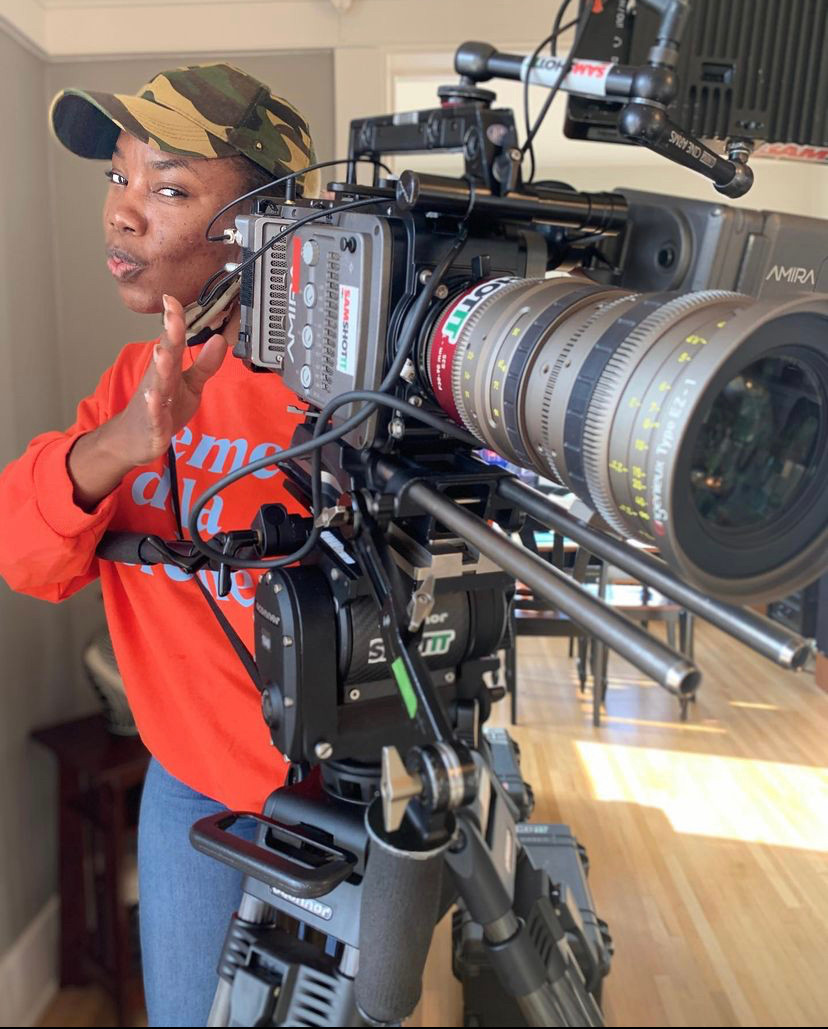 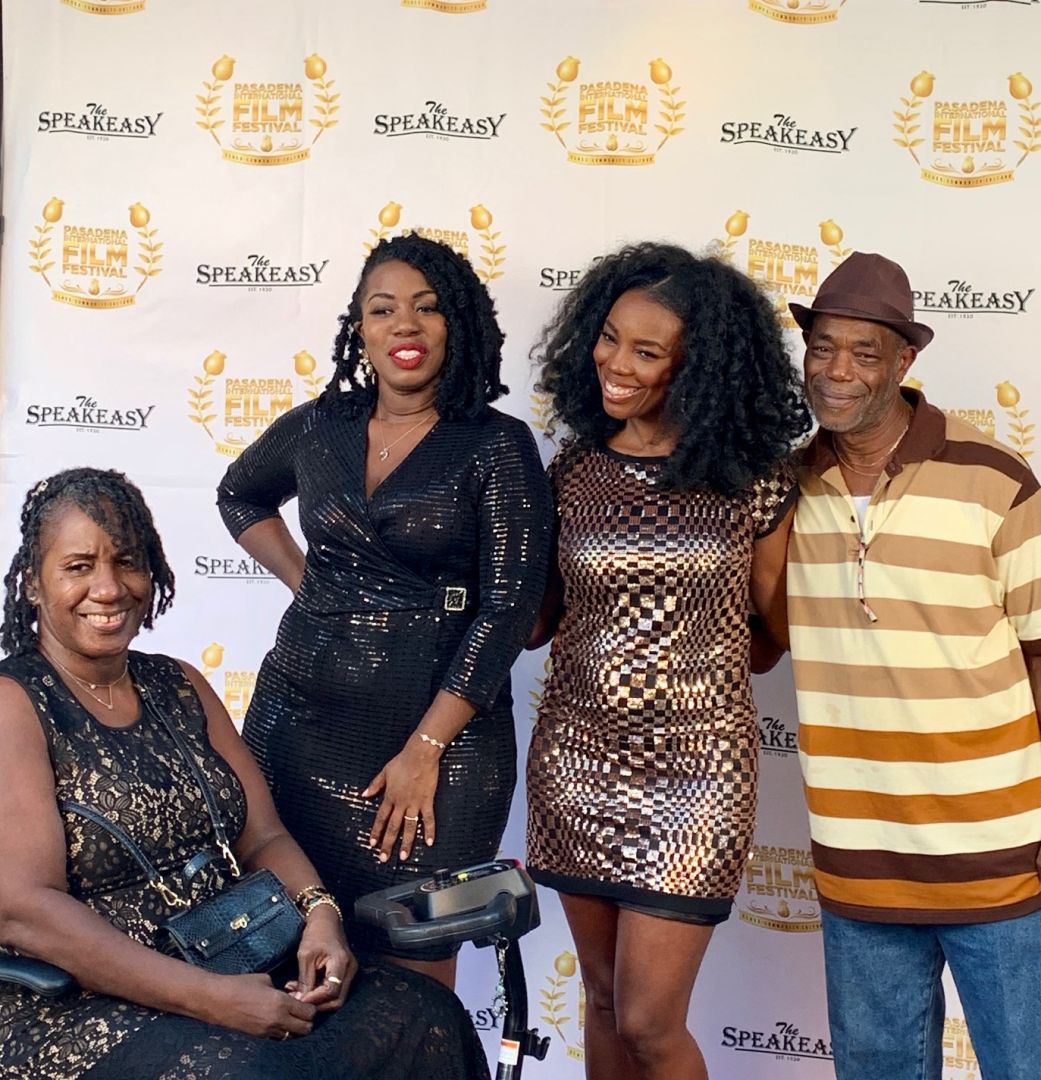 Many creatives hear from “friends” and “supporters”, “Why are you still doing this? or Man, you’ve been doing this a long time, I’m sure you can’t wait until something finally happens for you.” As if the collective work you’ve done isn’t enough because they’re measuring success by their standard.  But NEVER has my family said this to me. At least not in front of my face lol. Never. The support they gave me when they would drive two and a half hours to see me in a college stage production is just as beautiful when they flew out five and half hours to support the premiere of my award-winning directorial debut! And they donated money! (That’s important too! lol) I’m kidding, but not really. They have only fed positivity my way.  It doesn’t matter if I booked a role as a mime with two seconds on the screen, they will share, call, text, and tell the world how great I was.  That’s special. So, I have to give major props to my mama, daddy, and sisters! And, my bonus family aka good friends like my BFST6G, old college friends, and new LA friends that keep me encouraged.

Professionally, I have to shout out my former boss Lee Bailey of EURweb. This man, legend, icon, is truly a special guy. For those who know him, know that he’s very direct and doesn’t hold any punches with his critiques, but it only makes you better! I love him for that. Plus, he’s always supportive and willing to help me. My current team that helped me produce my new award-winning short film, “7 SHARP,” Madalyn Lawson and Darin Craddolph have not only showed up for me with my newest project, but they have also been on my team for my original program,The YES! Show not to mention that they’re just cool people and I’m proud to call them my friends. Darin is a great creative with a strong cinematic eye while Madalyn is amazing with succinct writing, strong administration and introducing out-of-the-box ideas. She’s a keeper! I truly honed my producing skills on an eight day consecutive shoot of my first feature “Brown Paper Bag” directed by Detdrich McClure. He challenged me with a full list everyday! I mean e-ve-ry-day!!! lol But it made me a good producer.  Plus, as I observed him, I took notes that I used as a director and I truly appreciate him for that.

And I have to mention my guardian angels. Listen, I’ll never forget when an old friend told me this: “I just don’t understand why God be protecting your butt so much. I mean, He literally puts your guardian angels to work! I bet them thangs ’round here limping with a neck brace!” I hollered because I know I’m working them hard as I become less of a mess everyday. Okay!  So Thank you God and guardian angels!