We had the good fortune of connecting with Marcus Terrell Smith and we’ve shared our conversation below.

Hi Marcus Terrell, what was your thought process behind starting your own business?
It has taken me years, but I have finally come to terms with the fact that I am a bonafide, unapologetic dreamer; not one of those “head in the clouds” kind of individuals who only dreams for himself, but I dream about how to make the dreams of others come true. To be more specific, I look for pain points in the daily lives of my peers, in areas like relationships, entertainment, exercise, and time management. Everybody is searching for how to make what has seemed impossible possible — they want to make friends or find a soulmate; they want to bring diversity to a less than diverse industry like film/tv/theater; they want to find inspiration in an unlikely place. My process behind any business I start always begins with asking, “What is the missing piece?” My company recently released a beta version of a new dating app on Apple and Android called “Glance,” which allows you to send a ping to someone within fifty feet of you that you have shared a moment or a “glance” with. If that special someone pings you back, the two of you are allowed a short five-minute chat before the chat disappears and you actually have to go talk to one another in person. Pretty simple. This idea came to me because I saw, in my own life especially, how nerve-wracking it was to approach someone in public that I was attracted to. The fear of rejection can be absolutely crippling. And I was not alone. I found that many of my friends and family members suffered from the same problem. I mean, there are literally thousands of blogs, YouTube videos, and self-help books dedicated to this one issue; and there are literally millions of people out there that share this same pain point. What is the missing piece here? I asked myself. The answer was, “A way to just find out if the feelings were mutual.” Step 1 complete. Step 2 was to see if there were other businesses out there already tackling this issue. That meant research. Downloading app after app, I searched tirelessly for the answer and time and time again came up empty-handed. It was when I had exhausted every effort that I knew I would have to do it myself. This was a universal problem that no one could seem to solve. My business would become the solution. Now that I had a solid vision–a goal in mind–I was able to set a course for success. I consider myself to be a very innovative and inventive person who embraces non-traditional paths to problem-solving. My brother, Curtis Smith, also an entrepreneur, had a great deal of influence in shaping me that way. This approach has always come with more questions: How could I do this in a way no one else would? What do I hate most about this pain point? In this case, how do I show my fellow hopeless romantics the errors of our ways? And I always came back to the notion that I need to “take away” instead of “add to.” By “take away” I do not mean stealing something from you that you will miss; I mean taking away the opportunity you have been allowed to be complacent. In the case of Glance, by only allowing you five-minutes to chat on the app (with the person who is standing across from you), I am taking away the comfort that you’ll be able to text with this person later, because you won’t, as well as taking away the fear of rejection now that you know they like you. Now, you will act instead of retreat. I found a structure that made the consumer feel empowered. Step 3. Because I made it to Step 3 and was now able to accurately articulate my vision first for myself and then to others, starting my own business was a no brainer. The intention first and foremost was/is to help people. Keeping that as my foundation, all the other pieces have and will continue to fall into place. 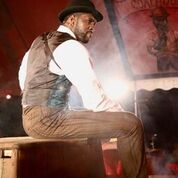 Can you open up a bit about your work and career? We’re big fans and we’d love for our community to learn more about your work.
Hands down, I will admittedly say, I am a creative with a big imagination and an unshakable belief that any and all things are possible…if I just put in the work. Not to mention, I have an incredibly wide-range of interests and talents that I don’t want to have to choose between: Am I a director or an actor? A producer or a writer? A singer or an entrepreneur? I have always believed that if I manage my time efficiently and surround myself with great mentors, one interest will feed the other, and great things can be achieved. A bit about my past, I graduated from the University of Arizona, where I received a BA in Linguistics (German and Spanish concentrations). The following year I was accepted into the Actors Studio Drama School (ASDS) at Pace University in New York City, where I received an MFA in Acting. During my time in New York, I performed in several Off-Broadway productions, and then I was given the awesome opportunity to join the national tour of Broadway’s The Book Of Mormon. After a three-year stint with this phenomenal show, I moved to Los Angeles, where I diversified my talents as an actor on TV and Film (NCIS: Los Angeles, Marlon, Brooklyn 99, Grey’s Anatomy and Netflix’s Little Evil, and many others). But theater has not taken a backseat however, as I performed in starring roles in several regional productions, my latest as Coalhouse in Serenbe Playhouse’s production of Ragtime (Atlanta, GA). Through it all, I have continued to thrive as a world-builder and storyteller, with an imagination that has compelled me to explore many genres and formats of writing, including a self-published five-part novel series entitled Cry The Fables, a Broadway-bound musical I am both directing and producing with my awesome associate, Linda Joe, entitled Accidental Joy: A New Musical, and I have written several TV pilots, including a sci-fi, afro-retroistic adventure series called SIGHT. As an African-American, the latter project is what I am most proud of at the moment–SIGHT. Given this transformative time we are living in–an age of real change, growth and renewal of our values as human beings–I believe that it is imperative to bring diverse voices to the screen and create accurate depictions of our glorious African past, in a land that was rich, royal, and reverential. It is incredibly hard to reconcile your future if you don’t know where you come from, which is why I see so many of my people struggling to find a true home here in America. Home is where you feel safe and secure–a place you know was designed with you in mind. But it’s clear to see that African-Americans have been left out of the planning. Sight will also serve as a history lesson about an Africa we never read about in school, and It will be, in my opinion, a valiant and successful attempt to bridge the gap between our present and our past–a dark divide that, I can say with 100% conviction, all races of African descent see when they look into our past. I want to fill it in. My father, Sylvester Smith, always says, “Luck is where preparation meets opportunity.” This project is a clear reflection of that phrase. It has taken me well over two years to prepare this work for the public, and that has included planting industrial seeds, networking like there is no tomorrow, and delivering an impeccable product to my consumers. This journey came with many losses and and many more setbacks, but persistence has brought me this far.

If you had a friend visiting you, what are some of the local spots you’d want to take them around to?
Soho House West Hollywood/Downtown – drinks, events and social networking No Vacancy – Club Life Weho – it’s a staple in this town The Pantages – Broadway show Red Cat – some immersive dance experiences The Broad and the Underground Museum Hike to the Observatory and Runyon Canyon

The Shoutout series is all about recognizing that our success and where we are in life is at least somewhat thanks to the efforts, support, mentorship, love and encouragement of others. So is there someone that you want to dedicate your shoutout to?
I definitely send The Shoutout to my mom, Rosemary Smith. If there is one person whose faith has never wavered in me and the goals that I am trying to achieve it is her. Whether she was pounding the floor with her fists like the most eager fan at the NBA Final, which was actually my first little league YMCA basketball game, driving me to every orchestra or choir competition in and out of state, and even investing her savings into my crazy business ventures, she has been my rock, the solid foundation I can always count on. “Persist, persist, persist,” is a phrase she repeated and has continued to repeat to me ever since I was a little child, which is why it is nearly impossible for me to quit anything I start. She instilled in me the strength and ability to look at setbacks as opportunities, to be a critical problem solver, and to always think outside of the box. Not to mention, she is an entrepreneur just like me. Overall, there is no one I have seen work harder, care more deeply about her family, or love more unconditionally than her. I am forever grateful to have such an inspiring person in my life.