We had the good fortune of connecting with Ryan Singer and we’ve shared our conversation below.

Hi Ryan, what’s the most important lesson your business/career has taught you?
The most important lesson my career has taught me throughout the years is that there truly are no rules or fixed standards for how, why, when or what we must create or when we are successful. We all rely on old stories that have been told and become the bedrock for our understanding of what “being an artist” means and none of it truly matters or needs to be followed for one to call one’s self an artist or creative – in fact, even deciding to call ourselves an artist or creative is limiting in many aspects. We look out into the world and we see others do what we wish to someday do or even at times wish we had already done, but the question is why do we feel that way? We feel that way because we’ve bought into the idea that we must have certain things, awards, accolades or accomplishments to feel validated as what we’ve chosen to call ourselves. Often times in the past I’ve said, “I know I’ve made it when…” I have stopped doing that because I know I already made it. I made it the second I decided to pursue my dream and even more so when I realized there were no rules to how I must be or proceed as an artist or creative or human being who wishes to be successful in the arts. Embracing the truth that there are no rules to being successful was a way for me to take control of my career and more importantly, take control of my happiness. If my path is to create one day in the morning and the next day at night, then so be it. If what I’m creating is only meant to be seen by three people who find something truly valuable in it or heard by thousands who needed to hear it, I’m okay with either. If we zoom out and see how tiny and meaningless it all really is, it becomes so beautiful…at least to me. We can create our own standards of success, our own schedules of productivity and ultimately our own ideas of what we believe to be art. This mindset has made it much easier for me to understand that my past judgments of others’ work was incredibly petty and some kind of weak attempt at justifying my worth that was as-of-yet appreciated. I don’t go all the way in saying that all criticism of any kind can be this way because I’d be making a rule and I’m trying to move away from those. But, I am saying that when I focused on my happiness first and foremost, my appreciation of all things, including my own work became much more profound. In our culture, it seems that if we don’t hate or dislike enough of a certain thing it means that we are not discerning. I would argue that hate doesn’t come into discernment at all. Once I moved past needing the validation from the old rules and standards that were in place that I had previously been measuring my success by, those imaginary sources of worth no longer had a hold on my happiness. That is the real value of understanding that there are no rules in what or when we create – taking control of our own happiness. I envision a future that when a child is asked, “What do you want to be when you grow up?” Their answer is simply, “Happy.” I think my career has taught me that striving toward happiness is the most important thing and all else will fall into place when I do so. 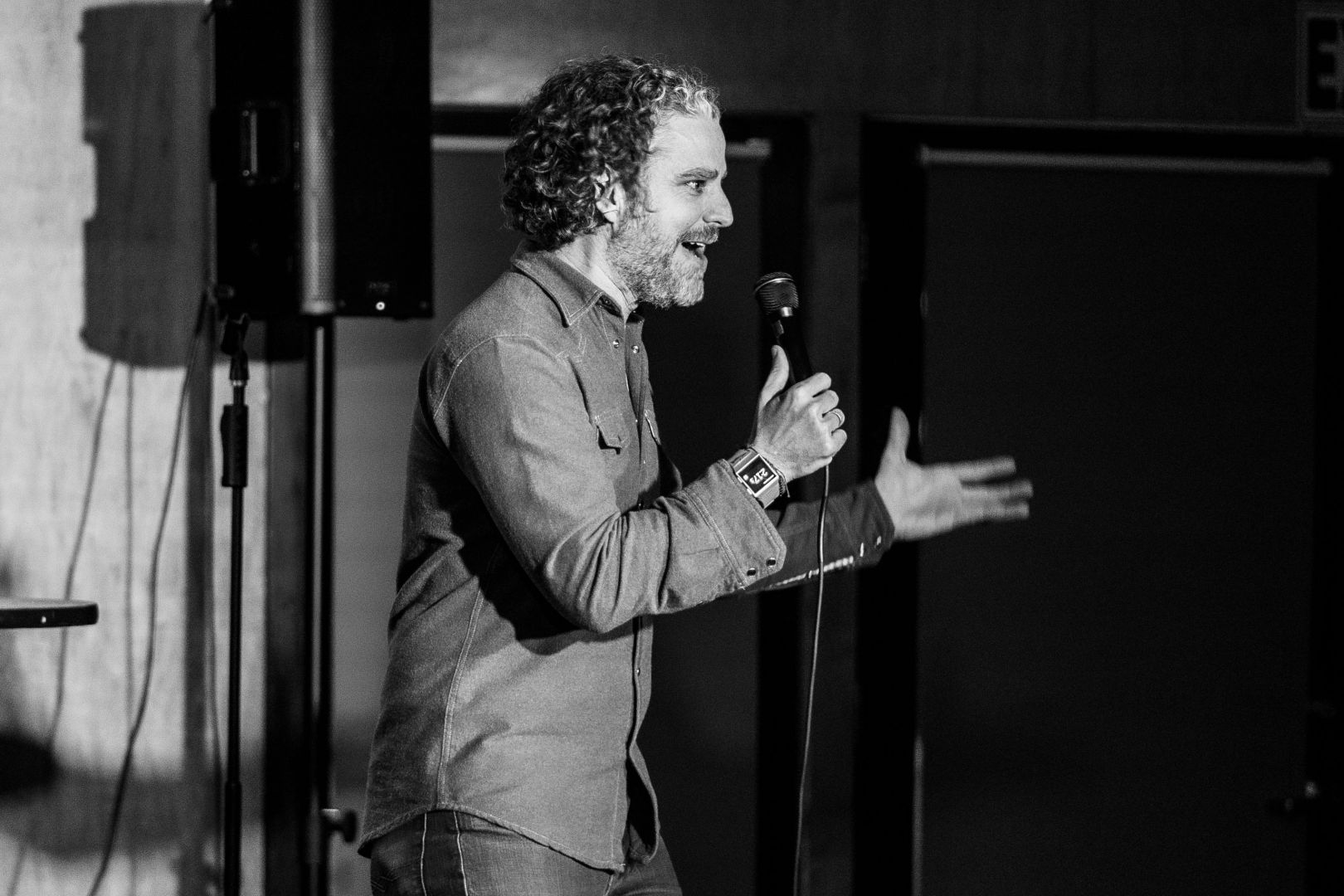 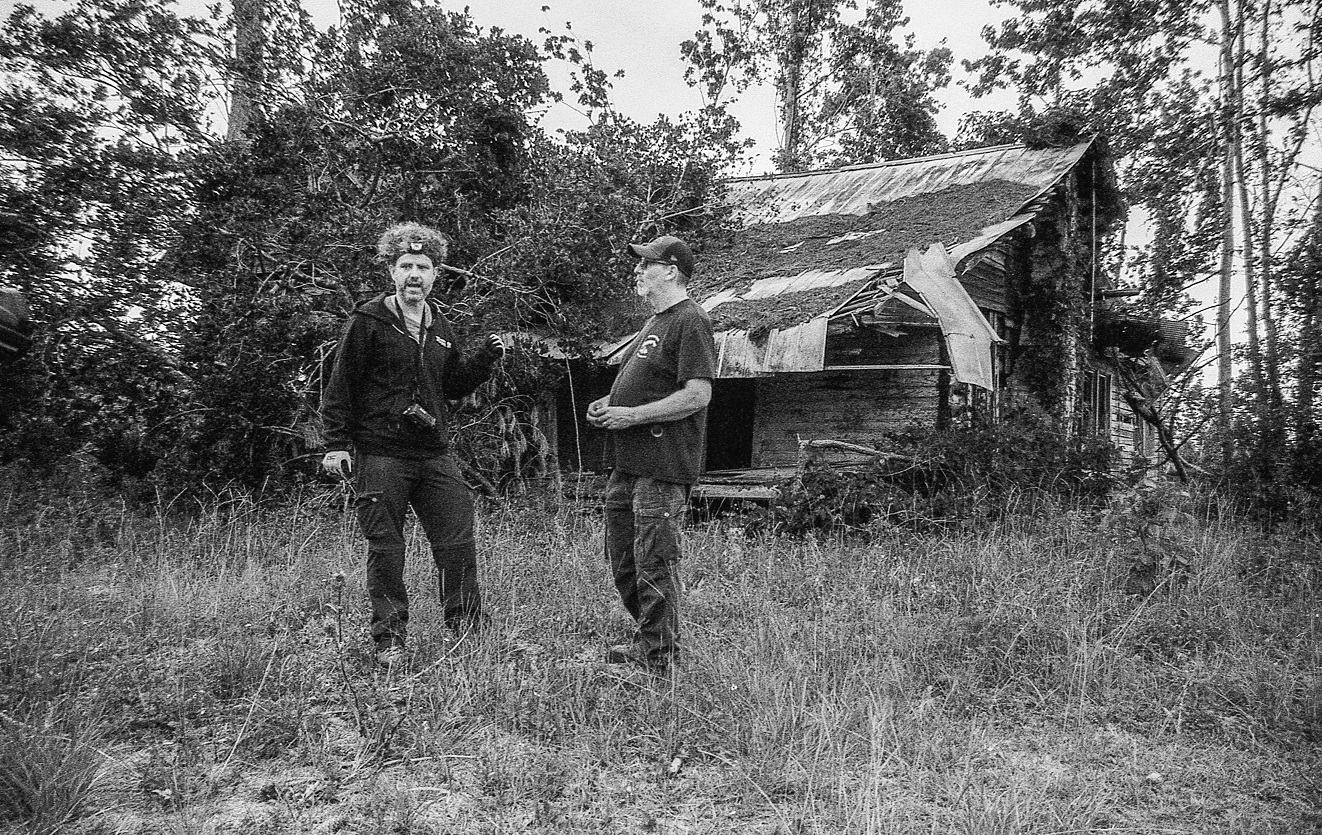 Can you open up a bit about your work and career? We’re big fans and we’d love for our community to learn more about your work.
Striving to be myself in my stand-up, writing and other creative outlets is different than trying to be different. What I mean is that when I was younger maybe I wanted too much to be different and that influenced me away from just trying to be who I really was because I feared I was too much like everyone else. I got older and realized that everyone is very similar and there is something beautiful about that and not something to be afraid of or look down on. The more comfortable I got in my own skin, the more uniquely me I became in the type of jokes I wrote and what I felt comfortable sharing on stage. I have been hosting a paranormal podcast for the last 7 years and that has heavily influenced my stand-up comedy and everything else I do creatively. Sharing those unexplainable experiences on stage and discussing subjects on the stages of comedy clubs that aren’t common fodder has been a real joy and exciting for me. The world seems to be coming around the last few years to a lot of the “strange” topics that I’ve been telling jokes about, but that is not to say that there weren’t a lot of interesting reactions over the years when I would talk about Bigfoot, UFOs, ghosts and other “weird” stuff. The most important thing I focused on during my career was doing the work. That is the real challenge – trying to get as close as possible to the version of ourself we are trying to share. There is a disconnect between the comedian or performer we want to be and the one we are when we first start. It is a process to get closer and closer over time and it can only be done by doing it. In comedy it is called “finding your voice.” I think what that truly means is that we eventually become comfortable performing and get close to the version of ourself we imagine in our heads being successful at communicating our ideas. The closer and closer we get to that version of ourself, our true self, the better we are as performers. The biggest lesson I’ve learned along the way is that there are no shortcuts to true success. For some of us it may take longer or be faster, but if we can embrace the unique journey of our career trajectory along the way it makes for a much more fulfilling life. I’ve got work to do still, but I find that staying in the moment of my career, of my life is what keeps it moving forward. I’ve also found that being open to the path which I may not realize I will take has been exciting. COVID changed stand-up comedy and I went from being a full-time road comic to stay-at-home zoom comic. It allowed me the opportunity to pursue another creative outlet in creating an app with 3 of my cousins called CrystalEyes, though. I never would have had the time needed to devote to working on the app if I wasn’t forced to stay home, so if we allow ourselves to accept our circumstances and make the best of them we always have a chance to do things that fulfill us. I am eager to get back out there and perform in public spaces again and think that the comedian I am now will be different than who I was and I believe it will be a better version, a closer version to myself after a year of introspection and learning new things.

Any places to eat or things to do that you can share with our readers? If they have a friend visiting town, what are some spots they could take them to?
Let’s assume for the sake of this list that the world is “open” again and these are some of the things I’d take my best friend to do in Los Angeles if they visited. Let’s start with some of the daytime activities: 1. Go to some of the many gorgeous hiking spots in the city: Wildwood Canyon in Burbank, Brand Park in Glendale, and Santa Monica Mountains to name a few. 2. We’d go to the best sports card shop in the country: Burbank Sports Cards to look at sports cards and possibly drink a beer with the owner if it was later in the day. 3. Spend the day at Santa Monica beach playing cornhole, wake boarding and people watching. 4. Go to as many of the amazing crystal shops in town to pick up some great stones: The Psychic Eye Bookstore on Ventura Blvd, the GreenMan Store in North Hollywood, the House of Intuition, and Liberate Emporium in Los Feliz. Now, for the time to really feel alive, the night: 1. Take them to The Dynasty Typewriter for some amazing comedy shows. 2. Stop by the Improv later at night for some comedy hangtime at the bar. 3. Post comedy hang turns into the late late comedy hang at one of the many amazing diners in the city for way-too-late coffee and food: Cafe 101 in Hollywood, Norm’s (various locations), Conrad’s in Glendale, or Swingers on Beverly. 4. If we were feeling adventurous, we’d head out to one of the countless haunted locations in the greater Los Angeles area (maybe the Old Zoo at Griffith Park) and do some investigating. Maybe even bust out a Ouija board if we had a few other people with us. 4. If the timing worked out, we’d hit up the monthly UFO group meeting I am a member of: UPARS (UFO and Paranormal Research Society) to take in a presentation from that month’s featured speaker. There are so many amazing things to do in the city and even after living here for nearly 10 years, I am constantly surprised. The amount of amazing comedy shows that are at the clubs or random venues like coffee shops or crystal shops around town make Los Angeles feel like I’m living exactly where I need to be. 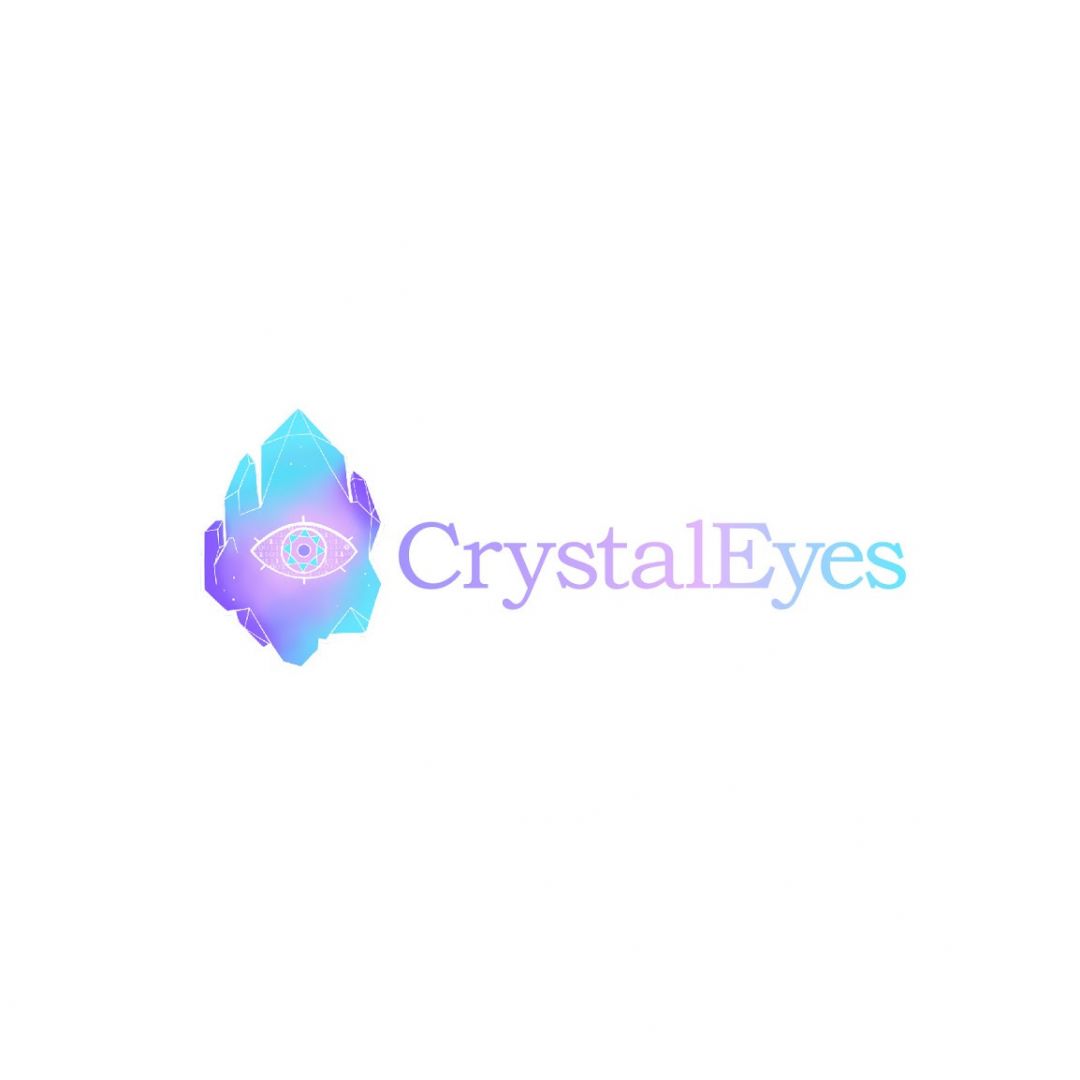 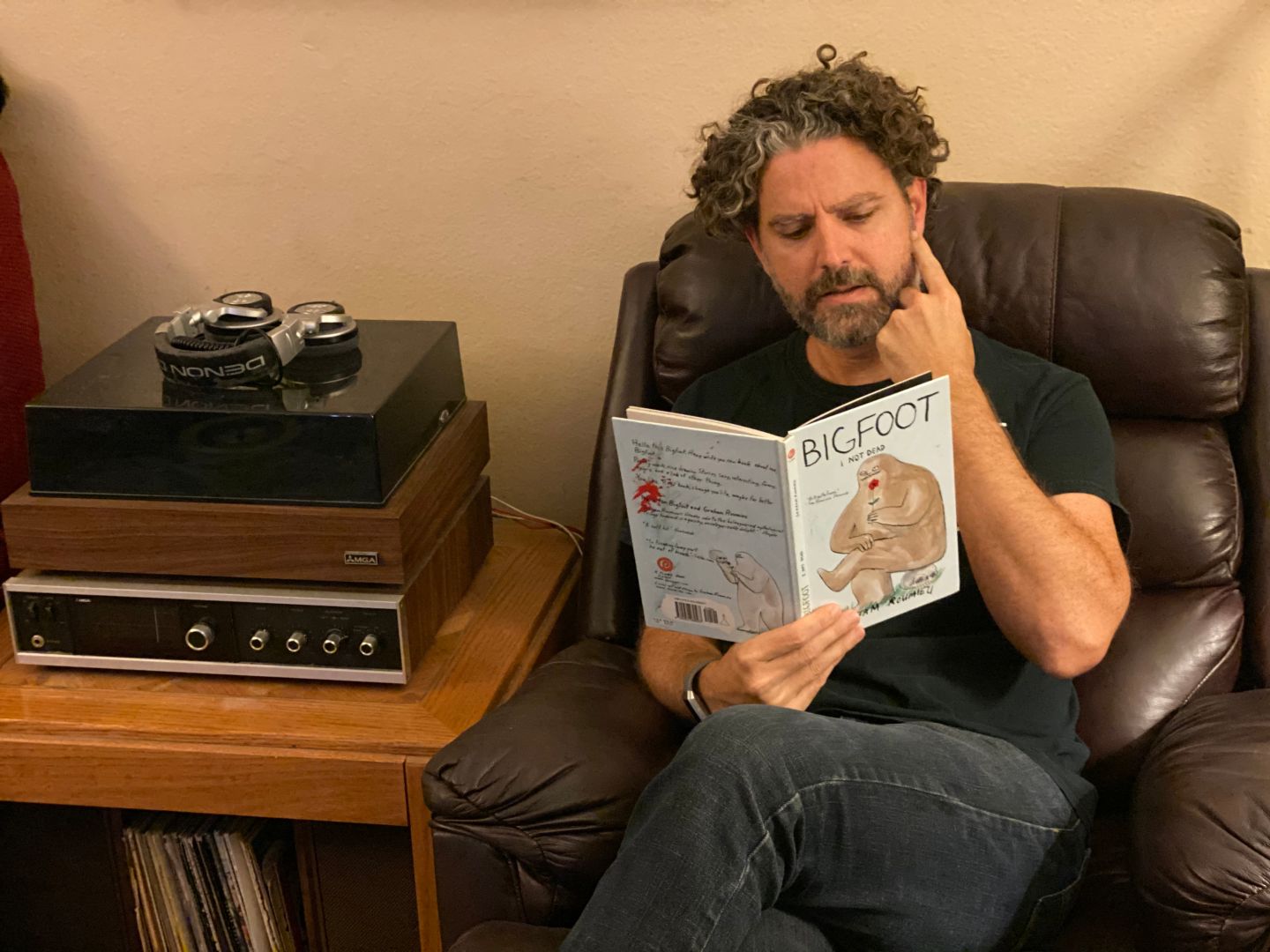 Who else deserves some credit and recognition?
I wouldn’t be where I am today if it wasn’t for the help of another comic who really opened a lot of doors for me, Marc Maron. After working together on the road one weekend, we became fast friends and for the next few years I opened for him a lot on the road and got to watch and absorb how he worked and learned so much about the craft of stand-up. It is not everyday when someone who is further along or has accomplished what we are hoping to achieve will take us under their wing and help guide us and I was extremely lucky to have him do that for me. There are no requirements for anyone to do that and when it happens we have to recognize how lucky and fortunate we are. There is no question that I would not be where I am today with his help, mentorship and friendship.