We had the good fortune of connecting with She-She O’Donnell and we’ve shared our conversation below.

Hi She-She, we’d love to hear about how you approach risk and risk-taking

I had been working in downtown Chicago in various corporate sales jobs for most of the 90’s when out of the blue my younger sister Maureen died of a fever of unknown origin. This snapped me out of my automatic pilot lifestyle of just being a workaholic with no free time or joy into a place where I began asking the important questions, “Who am I, why am I here and what is the purpose of life?”

I was married to another workaholic and we lived in a beautiful high rise in Lincoln Park with a pool on the roof but I wasn’t happy.

I realized I had a choice. I could continue on the path I was on, being in a loveless marriage and working like a shark to keep making money or I could take a moment and reflect on what I really wanted to do with my life. After I series of mystical synchronicities, I chose to throw all my cards back in and start all over.

After countless hours of meditation and going within, I had finally realized that I wanted to be a singer and a life coach so I can share heart opening original music and help others live their dreams. I got divorced, threw away all my business suits and high heels and packed up my Ford Escort with my treasured belongings and took Route 66 across the country to LA. I started singing and playing my guitar in my angel wings from the “Motherplucker Feather Company” and offered angel readings on Venice Beach. For the last 20 years I worked as an everyday earth angel and have lived a very blessed life filled with abundance, adventure and so much fun! I’m so glad I had the courage to make a change and pursue a career that ended up being so much more fulfilling than climbing the corporate ladder! 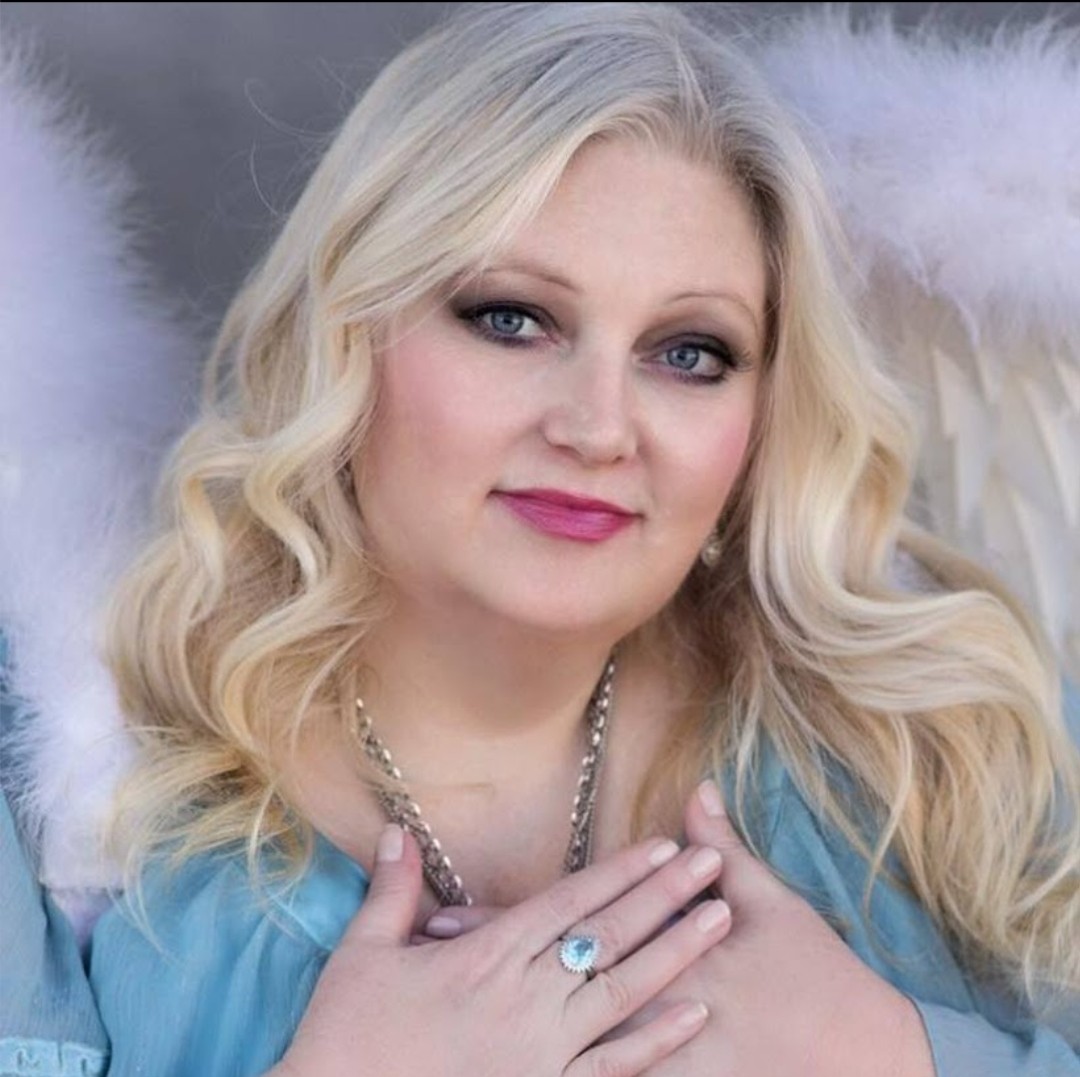 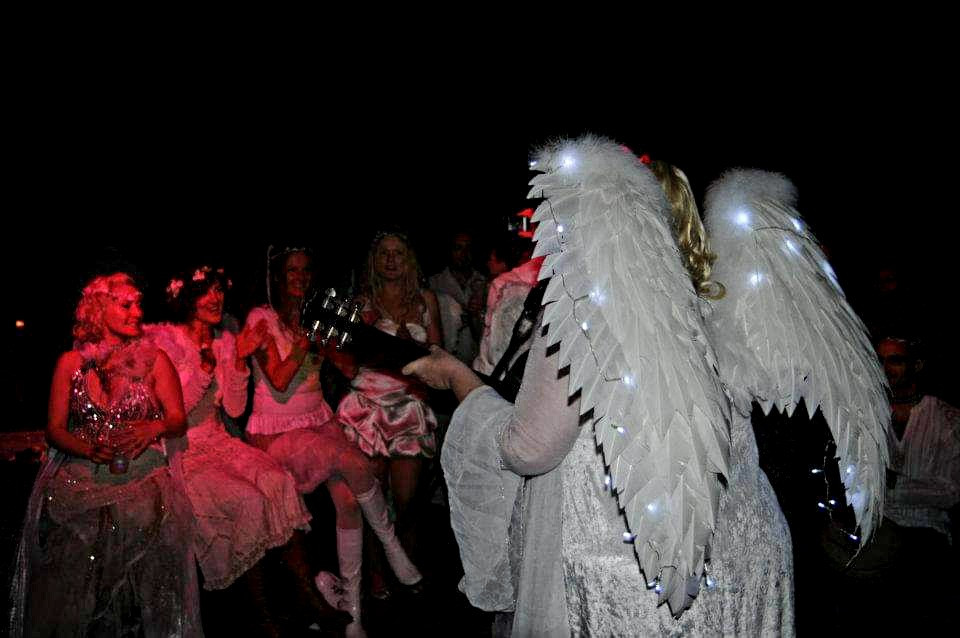 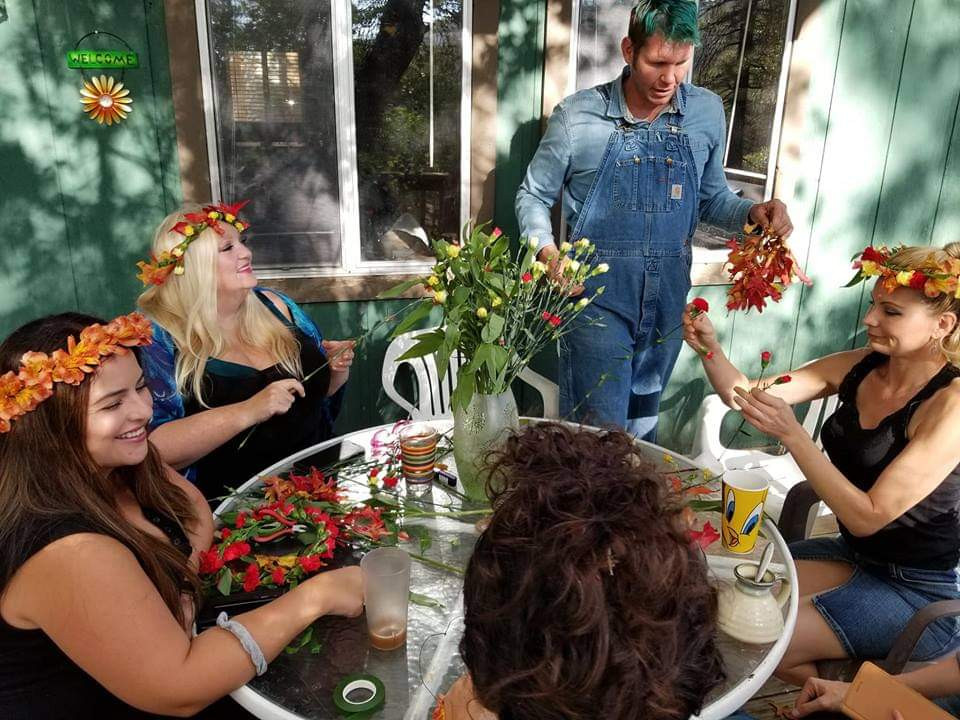 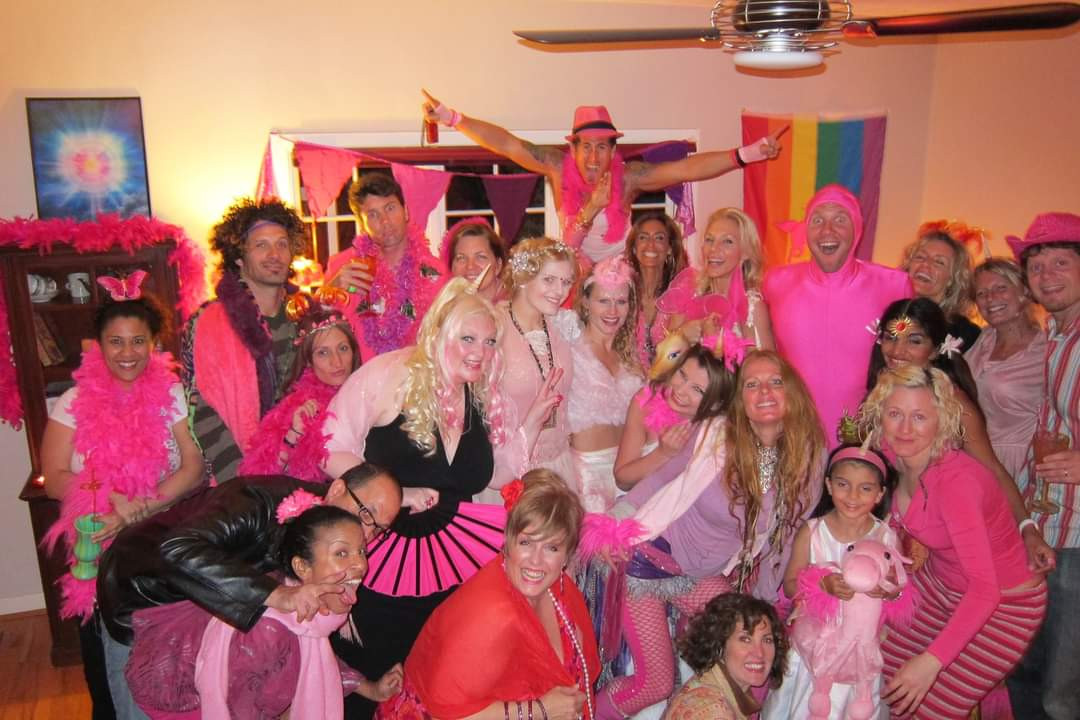 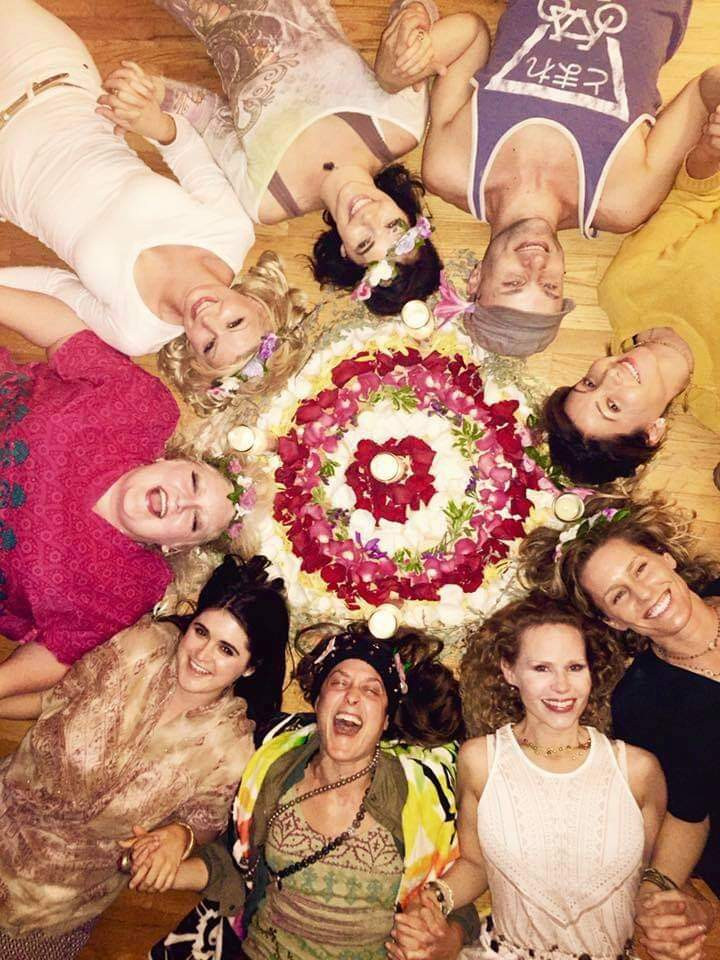 My father Sean is a professional accordionist and he taught me how to sing Irish songs at a young age. I had voice & guitar lessons from age twelve on and was performing with him at Irish-American events throughout the Chicagoland area. In my 20’s I fell in love with jazz so I learned a bunch of jazz standards and started performing on dinner cruises and at events. I had never understood how people were able to just write original songs from scratch though and my soul really longed to express itself in that way.

After my had sister died I cancelled cable TV, stopped opening mail, stopped listening to the radio and just basically went “within” to the silence. After a few months, I started having mystical experiences and seeing “1111” – which is a spiritual awakening code – everywhere. I started hearing melodies and wrote my first song called “Waking Up”. I sang it at a songwriter’s open mic and lo and behold there was a producer in the audience named Gregory Crook who approached me afterwards and asked if he could record it. Within a year, I had recorded a full album also called “Waking Up”. I had my CD release party on 11/11/00 at the Hothouse in Chicago. I gave my CDs to a few friends and one day I got a voicemail from an event producer named Larry Contier. He said, “Someone gave me your CD and I have been listening to it nonstop on repeat for the last few days. I would love to book you for a few Body, Mind, Spirit Expos coming up in Denver and Ashville NC. Would you be interested?” I jumped at the chance to start sharing my talents!

I had been working in downtown Chicago, right next to the Board of Trade, as Director of Business Development for an internet company called E-Commerce Exchange. Since my spiritual awakening I found myself distracted and surfing the web for inspiring metaphysical articles. One day I ran across a channeling from Archangel Michael with a headline that just leapt off the computer screen, “Do You Want to be an Emissary of Light?” I thought to myself, ‘Yes! This is what I want to do with my life! I want to be an Emissary of Light and an Earth Angel and live in service to the God creating heart opening music and reminding people of their own divinity! Having been raised Catholic I had heard of Archangel Michael but I didn’t know he was around nowadays and up to things so I wrote him a letter, “Dear Archangel Michael…” I wrote of my desire to be of service as an Emissary of Light and shared all my concerns but expressed sincerely at the end, “If you’re serious I’m serious. If you are for real… give me a sign.” I dated the letter 4/23/01 and within a month I got my sign!

Larry Contier the event producer and I had become friends and one day he mentioned he was going to swim with the dolphins in Hawaii. “Dolphins?” I exclaimed, “I’ve always wanted to swim with the dolphins!!!” He said, “Well just say the word and you can go.” I said jokingly, “Word!” and before I knew it I was on a three-way call with the travel agent and he was booking me a $5,000 trip! I got scared and said, “Wait, I can’t pay you back for this!” And he said, “You don’t have to. This is 100% a gift. My only concern is that it is non-refundable so I want you to be sure.” I felt my soul stirring and I knew I was a full body YES.

A few months later I arrived at the Waikoloa Hilton 4 star fabulous hotel on the Big Island of Hawaii. Larry hadn’t mentioned angels or the fact that it was a retreat but I found myself stumbling into angel expert Doreen Virtue’s “Healing with the Dolphins” retreat and guess who she was channeling on day one… You guessed it- Archangel Michael! That was the day my earth angel “training” began. She gave me a private reading and told me I was very naturally intuitive and gifted and that I was “clairaudient” (which is clear hearing) and “claircognizent” (clear knowing) and that I could be doing what she was doing. She gave me a scholarship to her Angel Therapy Practitioner training program and it was there I honed my intuitive gifts. I never wanted to be “psychic” or a “medium” because those were dirty words according to my strict Catholic upbringing. Nevertheless, I found myself on the angel path and became certified to do “Angel Readings” within several months of the training.

I have lived in the Hollywood Hills for the past twelve years and just five minutes from my house is one of my favorite places to eat – Yamashiro’s Restaurant. They have great Japanese cuisine and a FANTASTIC view of the city. Right next door is the Magic Castle which has world class magicians and delicious food as well. It is a member’s only club and I have been blessed to have been invited 4 times so far and I know how to shakedown tickets if I need to!

My favorite beach is in Malibu right in front of the casual but super yummy Italian Restaurant called, “The Sunset”. My friend Angelique used to DJ there every Sunday so I got groups of friends together and we would hang out on the beach for awhile in the afternoon and then pop in for Moscow Mules and appetizers in the evening. Also in Malibu I love Moonshadows on the deck which has a beautiful ocean view and great DJ Mick Cole spinning most nights.

Road trip! I LOOOVE driving up the coast from Santa Monica Pier to Santa Barbara on PCH. There is nothing like blasting the music and drinking up the beautiful ocean views. I have a good friend named Sarah in Ventura and I enjoy stopping by where she lives at the WAV (Working Artists Ventura) lofts and grabbing a bite with her and her daughter Vivi at “Beach House Tacos”on the pier. My two sisters came to visit me in June and we went on a gondola ride with “Gondola Paradiso” in the Ventura Marina. We brought snacks and our goldolier serandaded us and it was a totally charming experience.

I was also privileged to go on an eight-hour whale watching expedition off the Channel Islands near Santa Barbara with my bestie Gretchie and her daughters who were visiting from my hometown of Woodstock, IL. The water was choppy and many of us on the boat were turning green and when the captain saw the first whale spouting he yelled, “Thar she blows!” just as I blew my guts up into a plastic target bag I luckily had nearby.

I love going to dinner and a movie or shopping at the Grove because in addition to the beautiful fountain and unique decorations, there is always something interesting popping off there. One time I got to be on EXTRA TV as an extra behind Mario Lopez (one of my celebrity crushes) which was thrilling. I also happened to stumble upon PSY ponying around to his hit “Gangnam Style” and was within a few feet of him.

Lastly, I love the food and the view at the beautiful Castaway Restaurant in Burbank. I could go on forever because there is soooo much to do that I love here but those are some of my favorite recommendations. 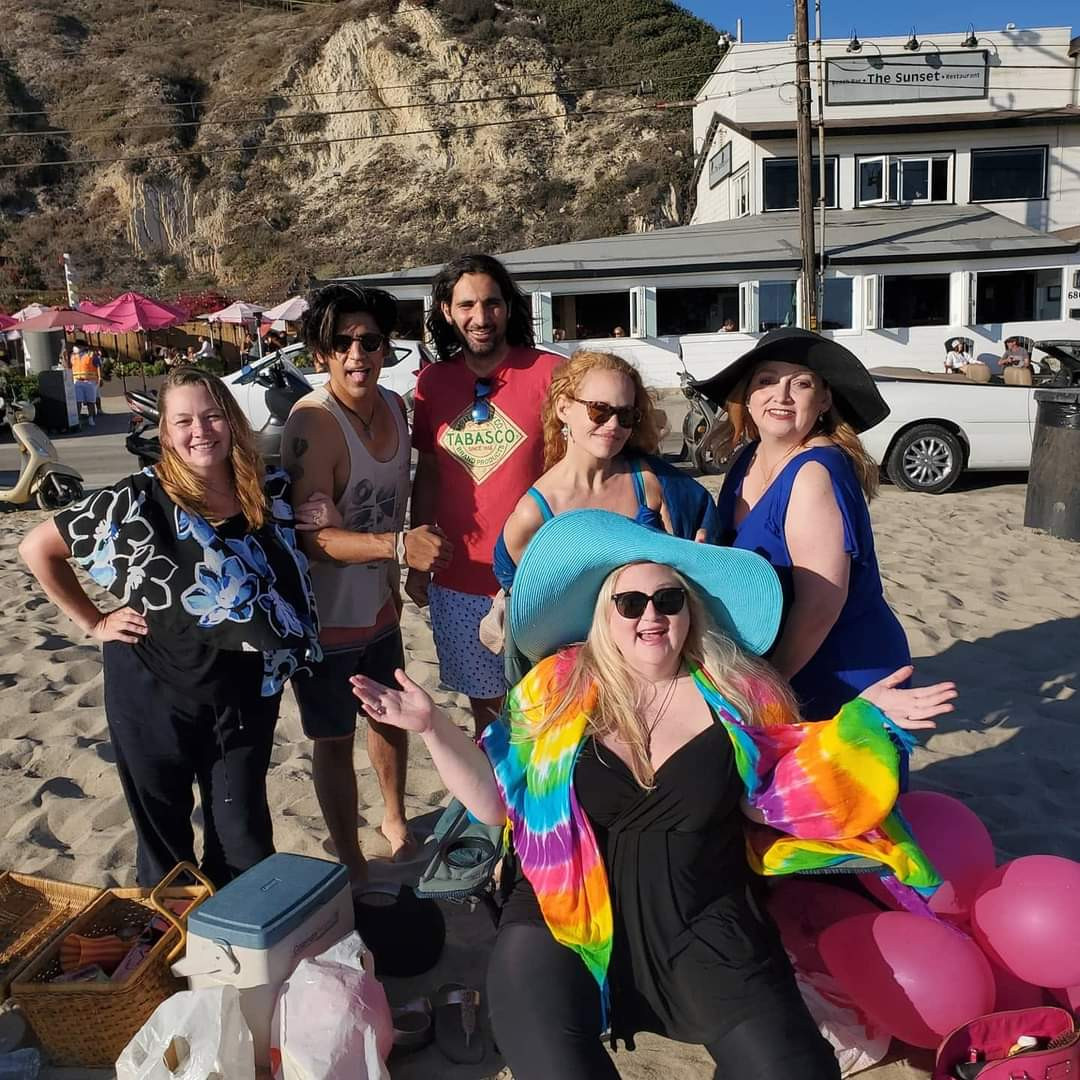 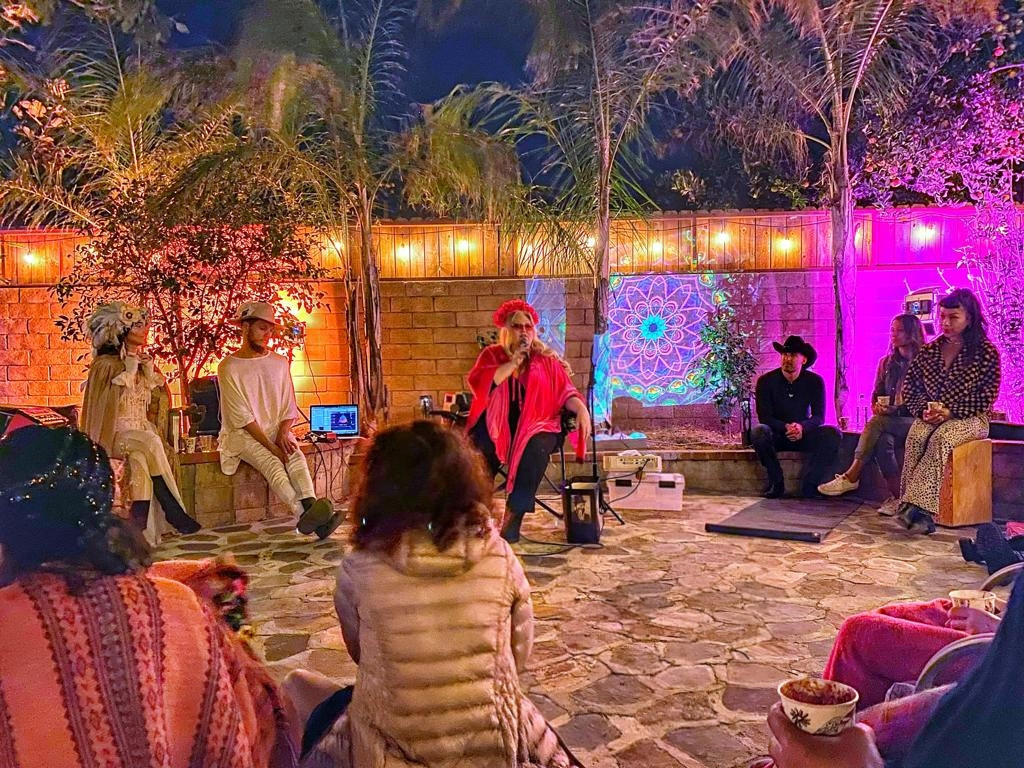 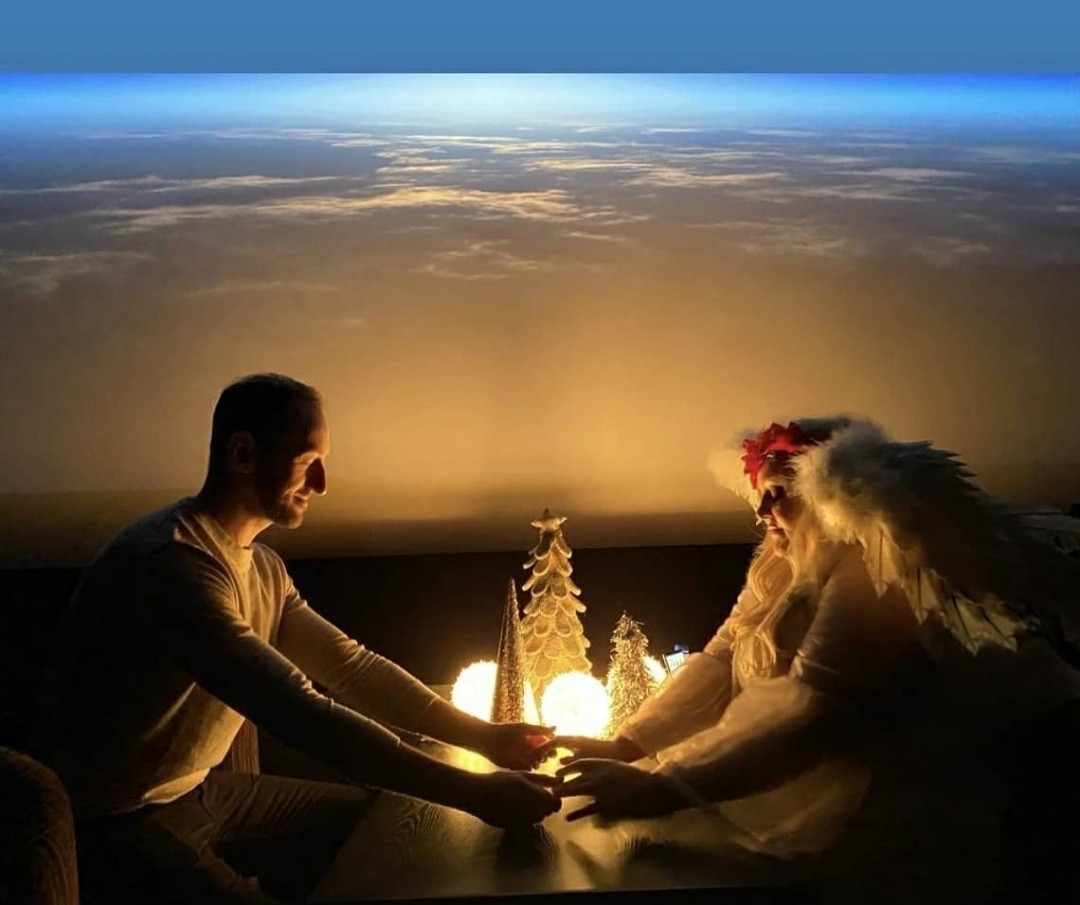 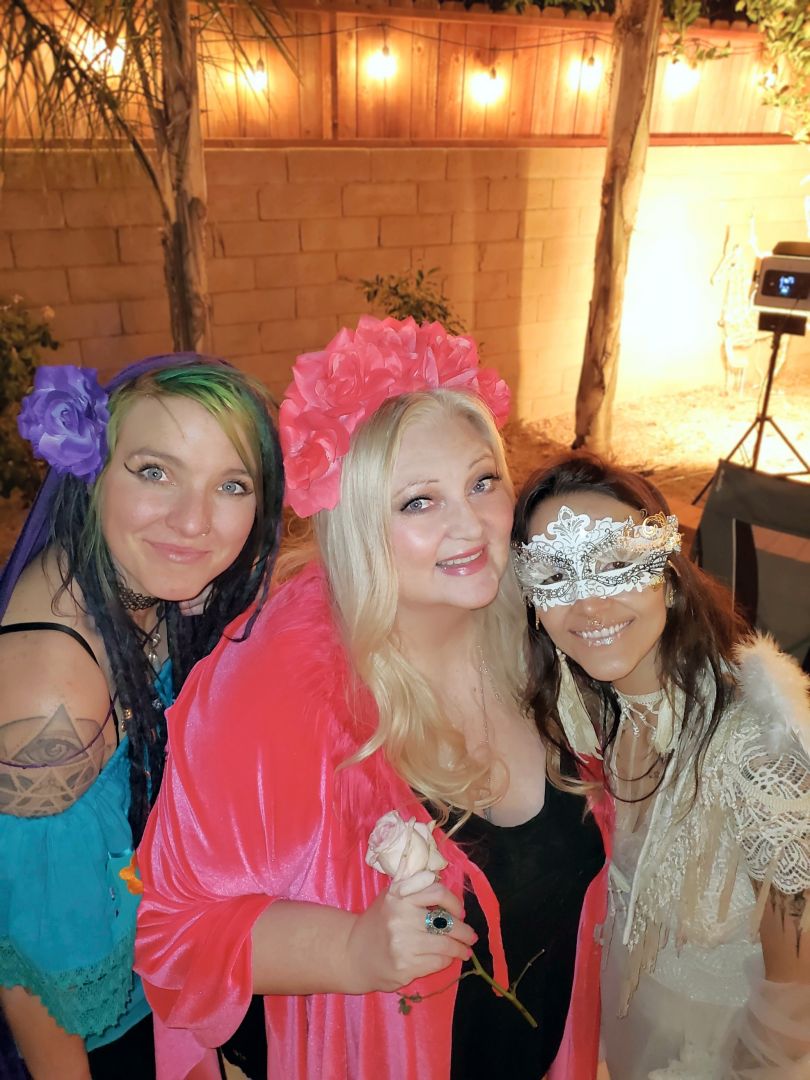 I would like to acknowledge Landmark Education Worldwide for being instrumental in helping me to free myself from the contraints of the past and create a new life that I love that is totally in alignment with my soul.

I did the Landmark Forum in 1998 right after my sister died and it was three days and an evening that rocked my world. At the end of the course we all got to stand up and declare ourselves as a new possibility in the world. I declared, “I Am the possibility of freedom, power, abundance and love.”

Synchronisticly, I was reading the book “Conversations with God” by Neale Donald Walsch at the same exact time and at the end of the book God says that all he wants of humans is for us to decide and declare the greatest and highest vision we have for ourselves and our lives and then become that using the I AM format which was JUST LIKE the Landmark Forum! After that I was on a nonstop rollercoaster of just following my intuition and the synchronities happened one after the other leading me to my miraculous dream life.