We had the good fortune of connecting with Bee Appleseed and we’ve shared our conversation below.

Hi Bee, what led you to pursuing a creative path professionally?
The artist’s path, in my life, has been less about a career choice and more of a spiritual understanding of what I feel ultimately aligned to do. I’ve arranged my life to make it as conducive to my creative flow as this is my place of mental well-being. My dedication to this has given me life experiences and creative output featuring 20 or so home-recorded albums and EPs and 700+ concerts in 40+ countries in my 31 years of life on this planet. This body of work and performances began with my first album self-released in 2008. I’ve never felt I had a choice in this path, my commitment as a songwriter is too strong – because of this I’ve faced homelessness and poverty along my journey. I come from a working class background and believe from my experience that the lack of funding by the NEA for individual artists makes facing poverty a constant shadow in creative pursuits of those from less than privileged backgrounds.

“Why must we suffer unnecessarily just to try to get to the same place that other people started from?” is a lyric from a more recent song of mine ‘The Most Likely To Succeed’ – speaking directly to the heart of inequality in society, and I believe it summarizes the experience. People think it’s a choice to be an artist and for some that may be true, but for artists like myself, it’s definitely not. In my struggles I’ve often contemplated whether the system is designed to break people down and not let certain voices of experience through. In the face of this internal confusion of whether someone like myself could be supported to have a voice in this world, I’ve kept my morale up and never stopped working. We’re all just passing through this Earth plane anyway and in the middle of a global pandemic where so many people have tragically lost their lives, it’s only reaffirmed my commitment to my purpose. 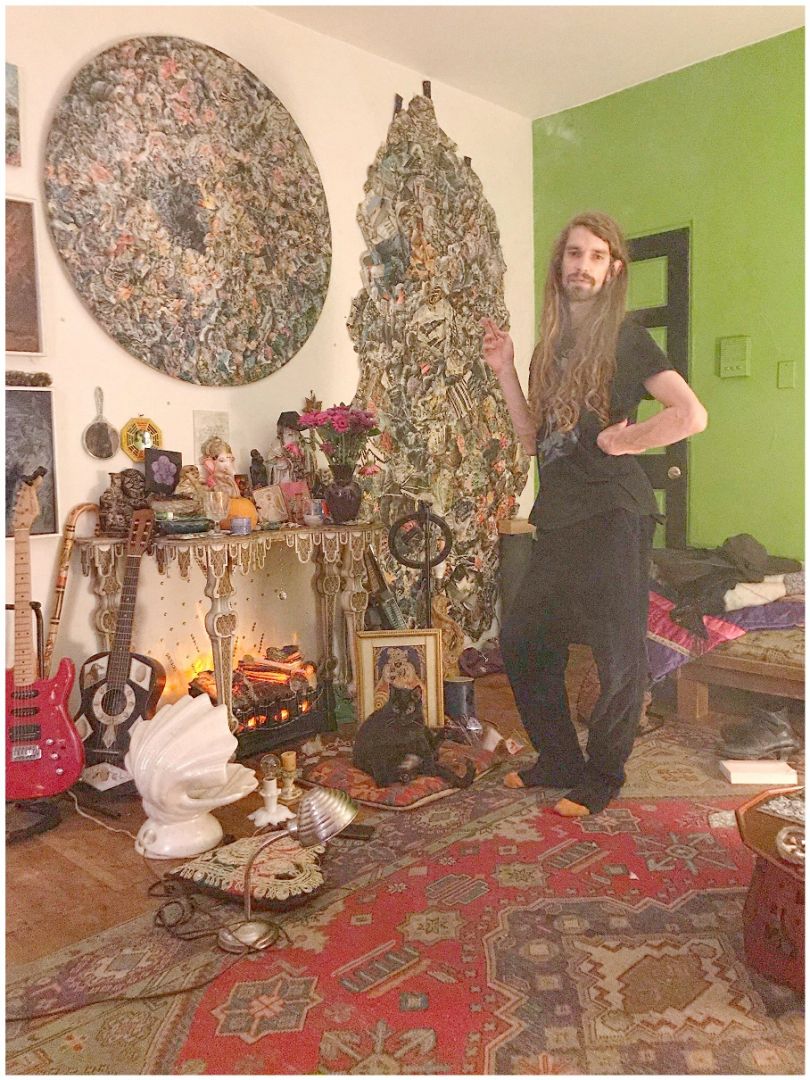 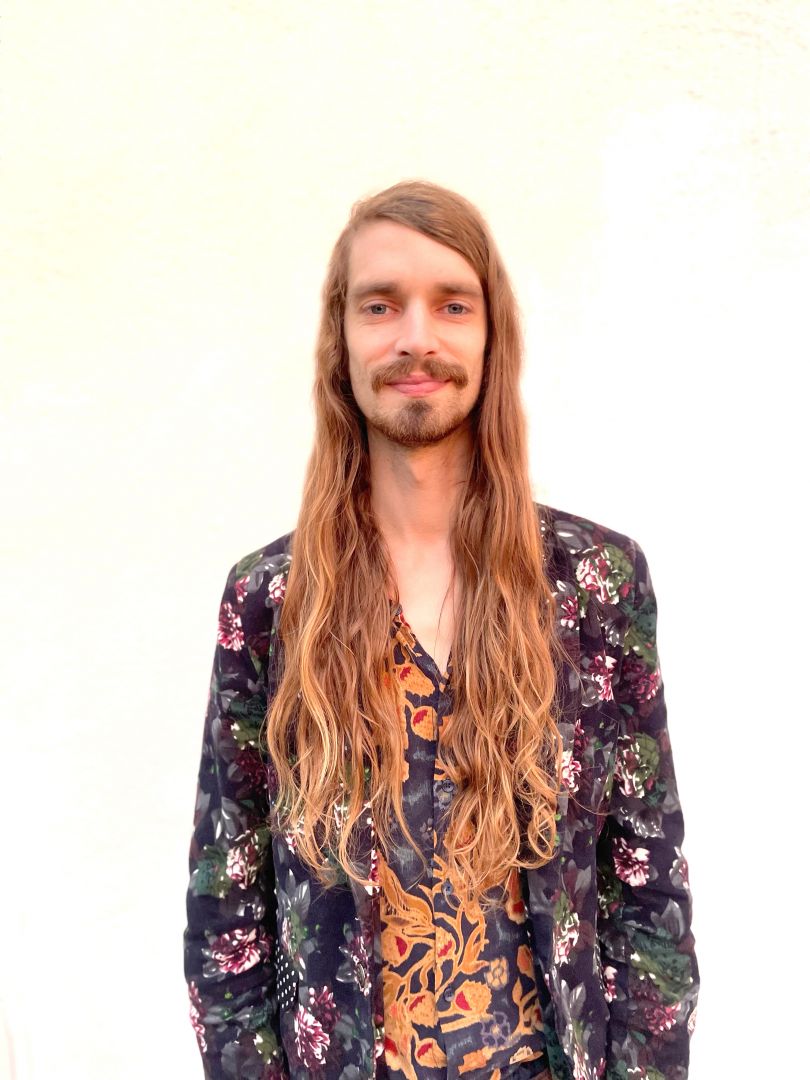 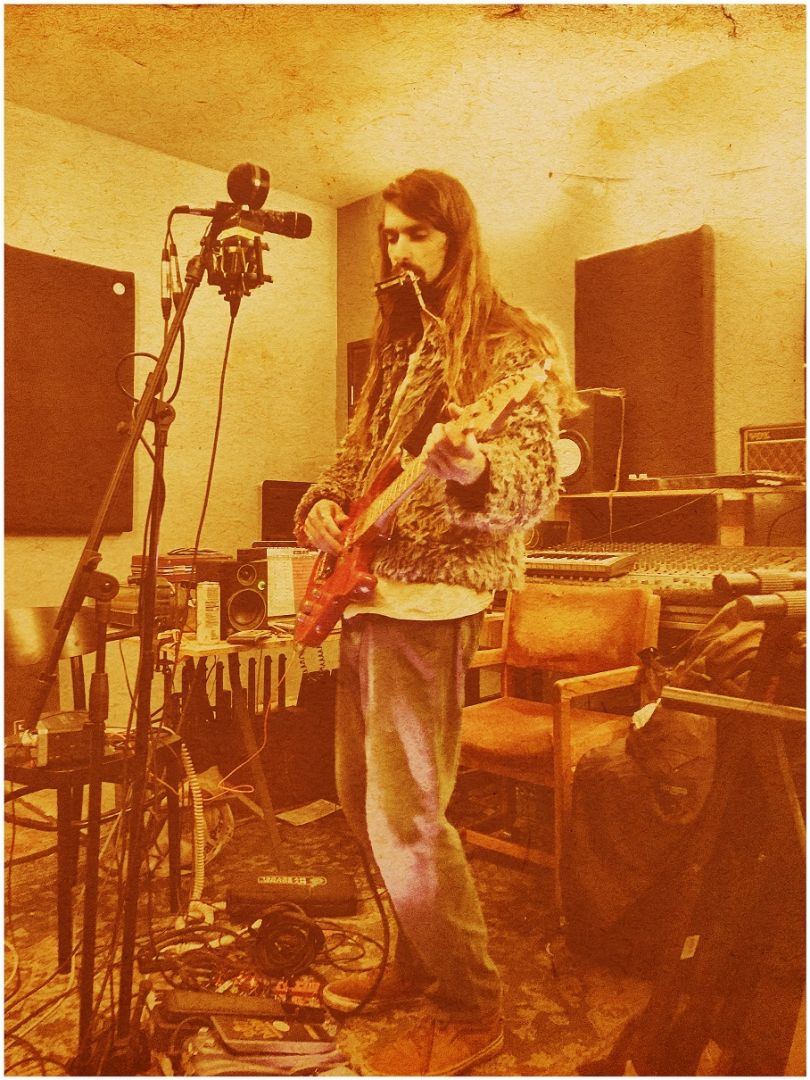 Let’s talk shop? Tell us more about your career, what can you share with our community?
My music is ultimately about freedom and creating a positive experience for the listener that connotes a philosophy of equality, honesty, and peace with the aim of transcending the personal into the universal experience. Inspired by songwriters such as Leonard Cohen and Bob Dylan whose lyrical message is first and foremost in their work, I begin by writing lyrics and then develop folk or psych rock music to accompany them. I believe music is healing and have been exploring healing modalities of sound and improvisation during the pandemic. Nora and I have a music project together called Elf Freedom that is separate from my solo pursuits in which we only improvise. I have learned a lot musically by exploring improvisation and that has informed and evolved my own songwriting. I want the listener to be taken on a journey with my music, as personal stories unfold in the songs creating a heartfelt connection. It’s in this place that I continue to explore and grow my sound as the vistas of understanding and connectivity through music is a vast expanse transcending language and culture with its potentiality unknown.

The biggest challenge I’ve had as a songwriter primarily was In 2017 when I found myself living out of my car for the majority of the year due to unaffordable housing costs in Los Angeles. I overcame this situation through luckily landing a job and eventually finding a secure place to rent. Being a live performance musician, I am highly social and through friends I made by playing out, I was able to eventually overcome homelessness. I am lucky this way. If I was introverted and not able to connect well socially, I may still be suffering from homelessness.

I think there’s this misperception that people who are homeless are all mentally ill, but from my experience I can tell you this is not true. There are a lot of people in Los Angeles who are homeless and have jobs or are going to school and they just can’t afford a roof over their head with the pay they receive. I even met a guy out there who came here all the way from Ukraine, was a victim of identity theft, and then became homeless as a result. A lot of people kill themselves before arriving to that point because the experience itself is traumatic and those who survive it to the other side without PTSD are hard to come by. But with this misperception of mental illness, people most often fail to account for the fact that it’s impossible to get a good night’s sleep outside, let alone in the long term. Sleep deprivation is not only a form of hallucination, but according to the United Nations it is also a form of torture. The entire year I was homeless in Los Angeles I suffered from constant sleep deprivation.

As someone who has traveled to most of the major cities in Europe, I can say that what I witness on the streets in Los Angeles would be considered a humanitarian crisis abroad. The average life expectancy of a homeless person is nearly 20 years shorter than those who are housed. When real estate business practices reduce affordable housing by eliminating rent controlled units – when people are made homeless by this – they are not only taking their home but potentially taking years of life expectancy away as well. I think so much suffering by the homeless and excessive use of taxpayer money could be averted by housing people immediately into decent housing when they are first made homeless. The degeneration that occurs to one’s mind and physical body by being exposed to the elements and violence on the street creates so much more suffering and deadly circumstances for the unhoused. It creates costly psychological and physical issues to treat. I also believe it destroys the sense of psychological well-being for all Angelenos who possess empathetic characteristics. The witnessing of the extreme degeneration of human life because of societal negligence is traumatizing in itself and I believe it is erosive to a sense of security and faith in the moral compass of one’s culture.

My ultimate goal is to have a voice through music so I can raise awareness and money to end homelessness and help with other humanitarian issues. I want to make the world a better place!

Any places to eat or things to do that you can share with our readers? If they have a friend visiting town, what are some spots they could take them to?
Living right on the border of Echo Park and Silver Lake, I’d for sure recommend this area, kicking it at Echo Lake, ordering Masa or Triple Beam Pizza, hitting up Flaming Taco, Taco Zone, Tacos Arizas, or Hugo’s Tacos as well as Dune in Atwater and Carousel in Glendale, hang out in Elysian Park, watch the sunset from Angel’s Point, going to an outdoor show, taking a hike in Griffith Park, Hollywood Reservoir, The Angeles Forest, or Topanga, and enjoying the beaches of Malibu, Venice, or Palos Verdes. For more of an overnight trip, definitely hit up Joshua Tree and Ojai as these are some of the best artist communities outside the city and there’s always something magical going on.

While I likely won’t be performing for a little bit to otherwise direct folks to here in this section, I’d like to leave you with this record – a live album recorded here in Los Angeles and uploaded online at the beginning of the year. In lieu of playing shows again and putting my audiences and the health of Nora’s mother at risk, I did one outdoor concert in September when the Covid numbers were down, performing solo acoustic versions of all new songs where I sing about all the things mentioned in this interview. Check it out if you’d like to tune in and thanks for reading.
https://beeappleseed.bandcamp.com/album/live-solo-acoustic-hm157-los-angeles-california-9-18-2021-lp 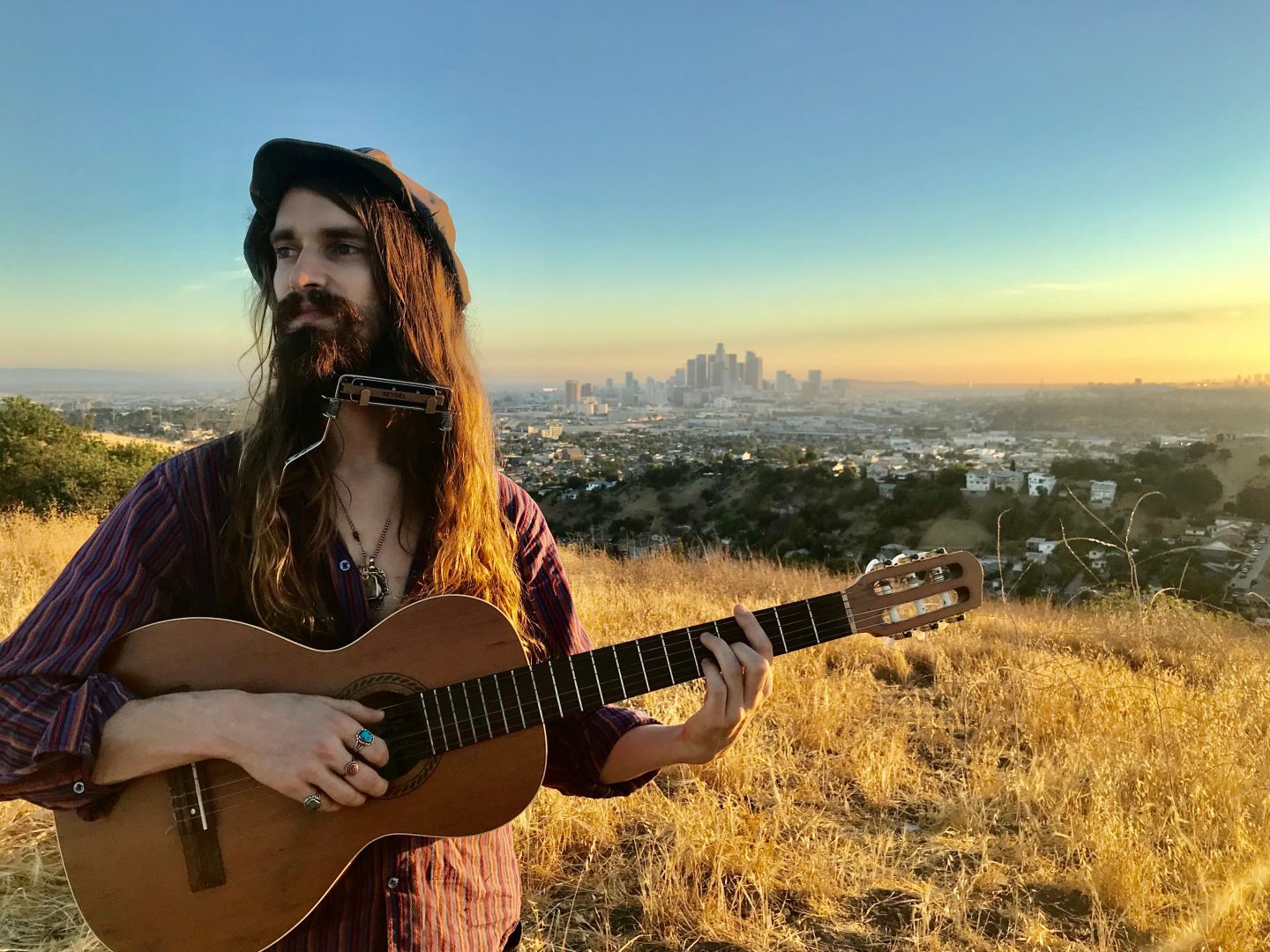 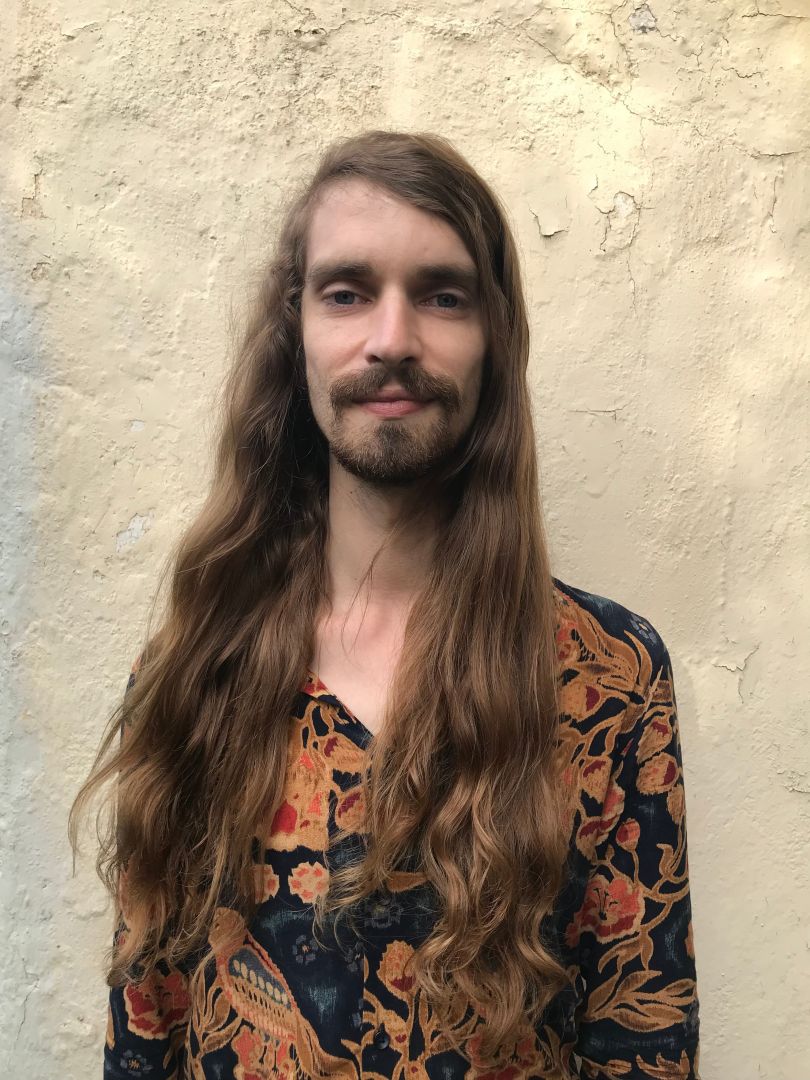 Shoutout is all about shouting out others who you feel deserve additional recognition and exposure. Who would you like to shoutout?
I’d like to give a shoutout to my love Nora Keyes who has been taking care of her elderly Armenian Mother with Dementia on her own nearly every day this whole pandemic. With Nora and I living together for the past four years and being social artists, it’s been a total lifestyle shift to make her Mother’s health and safety our number one priority as her adult day care center has been shut down, requiring we adjust our lives accordingly to ensure we don’t get sick and put her Mother at risk. Her mother’s lifelong dream is going to Armenia as her family fled there in 1918 due the genocide and she has never had a chance to visit. Meanwhile, Nora has managed to continue being productive during the pandemic, recording a few albums, making new paintings and collages, and overall just being so great and having a heart of gold. She’s an artist of merit and creative genius. Shoutout to Nora Keyes.