We had the good fortune of connecting with David Luong and we’ve shared our conversation below.

Hi David, how did you come up with the idea for your business?
Photonic Playground Art Gallery was conceived by myself and my husband, Steven Dowling Jr. Harking back to 2014, we had just moved out of a sterile and conservative part of Orange County where it was perhaps great for families, but not very exciting or having much culture at all in regards to the arts. And so we sought out a new place to live where we can immerse ourselves in the art scene while also being in the thick of activity and events. That place was downtown Santa Ana and to hone in further on that, we specifically were looking for a modern and art centric place to live called The Artists’ Lofts. The front door is literally downtown right when you step outside. These lofts were live/work lofts, and zoned commercial and residential. This enabled us to have a business on the first floor, and live on the top. It had a huge metal staircase leading up to our living room and and wonderful light with high vaulted ceilings in an industrial open style. Downtown Santa Ana also featured a monthly Art Walk program where other people with galleries (residential and fully encompassing galleries) would open up their doors to welcome the public for showing off and selling art. We thought to ourselves, this is a great opportunity for us to try our hand at opening our own gallery. We both worked in the games industry, and I had a great network of film/tv visual effects artist friends who I might think would love to be a part of this. It would a gallery for digital and entertainment artists, something that is lacking in the gallery scene where it’s mostly fine or contemporary art. In fact, we would be the only gallery of it’s kind really in Orange County. The idea for the gallery name came from Steven, who is a huge Star Trek nerd. The holodecks were “photonic playgrounds” and I thought that matched perfectly what we were going for in the art gallery. Everything you see reflected back are just photons of light, and it is that bending and manipulation of the colors and intensities that becomes the playground. Thus, Photonic Playground was born in 2014. I would use my own personal art for the grand opening in August, and then would feature new artists and themed art 2-3 months apart. 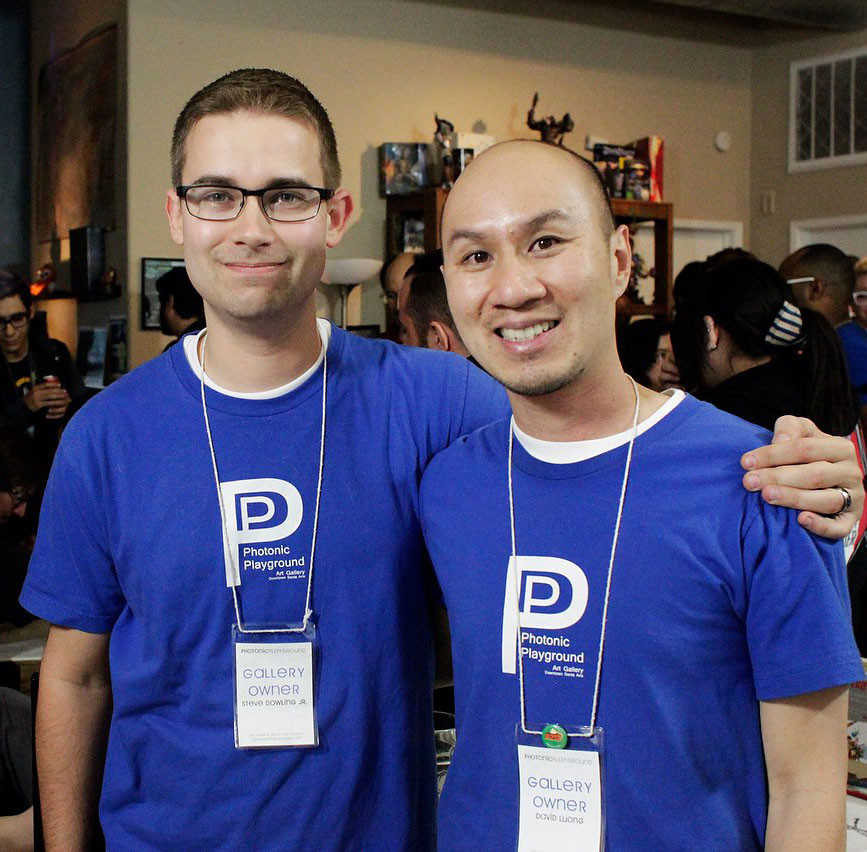 Any places to eat or things to do that you can share with our readers? If they have a friend visiting town, what are some spots they could take them to?
After living at the Artists Lofts for 4 years, we wanted some place more quiet, and so we moved to the 1950’s created suburbs of Park Santiago, Santa Ana. Even after though, I’m still a part of the art gallery scene as I’ve been asked to be the curator for The LGBTQ Center Orange County’s gallery, also located in downtown Santa Ana. So that would be one of the places I’d show them if I were in town. That, and a whole lot of eating/drinking downtown for sure 😛 Places like 4th St. Market, The McFadden Market with a beer cade and food court. We would check out the local beaches, 20-30 minutes away such as Laguna Beach (which also has a cool art gallery scene), Newport Beach, Huntington Beach. Of course see Disneyland, Universal Studios, Knotts Berry Farm, or Magic Mountain (for those theme park inclined.) Also to the quieter mountainside and forest of Big Bear with so many nature trails, hiking and more. For those more into the seafaring side, go to Catalina Island for the day (a hidden gem that is a part of Los Angeles) and spend the day walking around there and experiencing the island. Due to Covid19 restrictions, all of these are subject to change and being open of course. This pandemic has definitely taken a toll on going out and eating/drinking for sure!

Shoutout is all about shouting out others who you feel deserve additional recognition and exposure. Who would you like to shoutout?
I’d love to give a shout out to 1) a wonderful movie released in 1984 called The NeverEnding Story, and also 2) The book of the same name it was based upon. The treasure trove of visuals, music, adventures, and heartfelt tales in the movie inspired me to do so much in life as an artist. It also got me to read the book, which expands upon the world through my imagination to even greater depth that the movie never got to touch upon. The second movie though, wasn’t as impactful, and the third one….well I never even saw it because I didn’t want it to taint my love for the original movie (the trailer didn’t look anywhere close to inspiring as the first movie). Give the book and the first movie a go for sure!