We had the good fortune of connecting with Joseph Munoz and we’ve shared our conversation below.

Hi Joseph, what do you attribute your success to?
Passion mixed with work ethic. Whenever someone asks us what the secret to your success we have simple answer, and that’s to “Put in the work”. Pro Wrestling was never supposed to be a business for me, it was something really cool to do with my uncle back in 1994 when I was 14 years old. Since then it has consumed my soul, giving me the opportunity to wrestle in 3 continents, 14 countries and in over 95 different cities around the globe. It’s given me the opportunity to coach, mentor, train, produce and promote the next generation of inspired grapplers and give back like those who did for me. My years of experience has earned me the skills to create a successful business in Santino Bros. Wrestling Academy, the #1 Pro Wrestling school on the west coast. 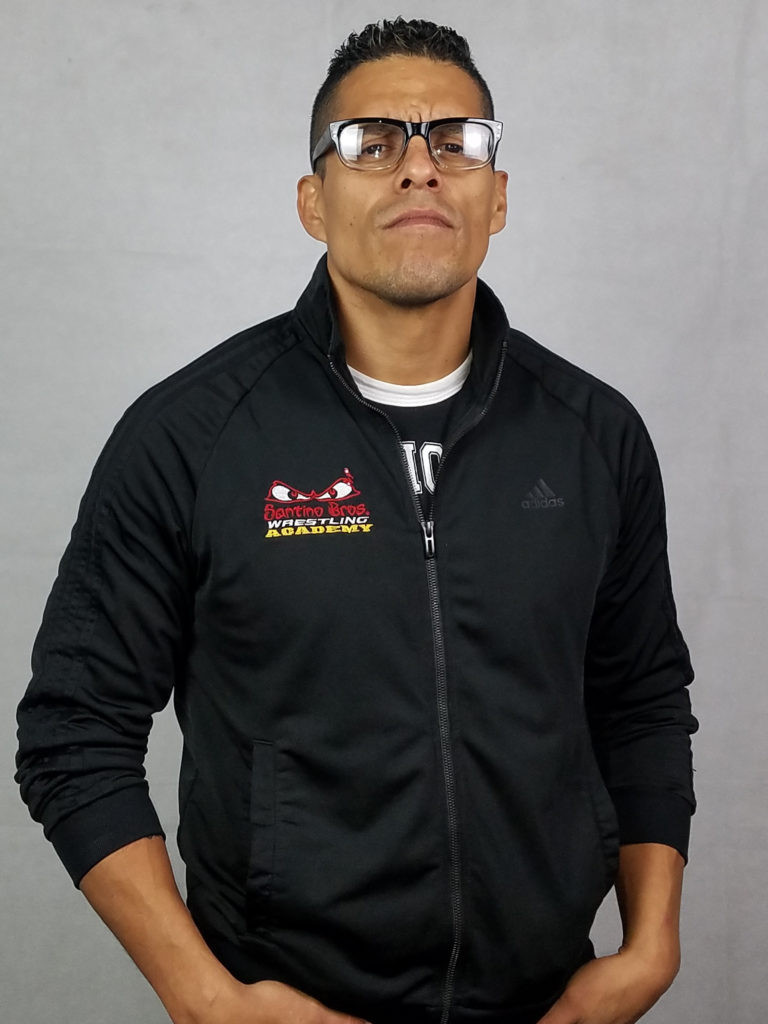 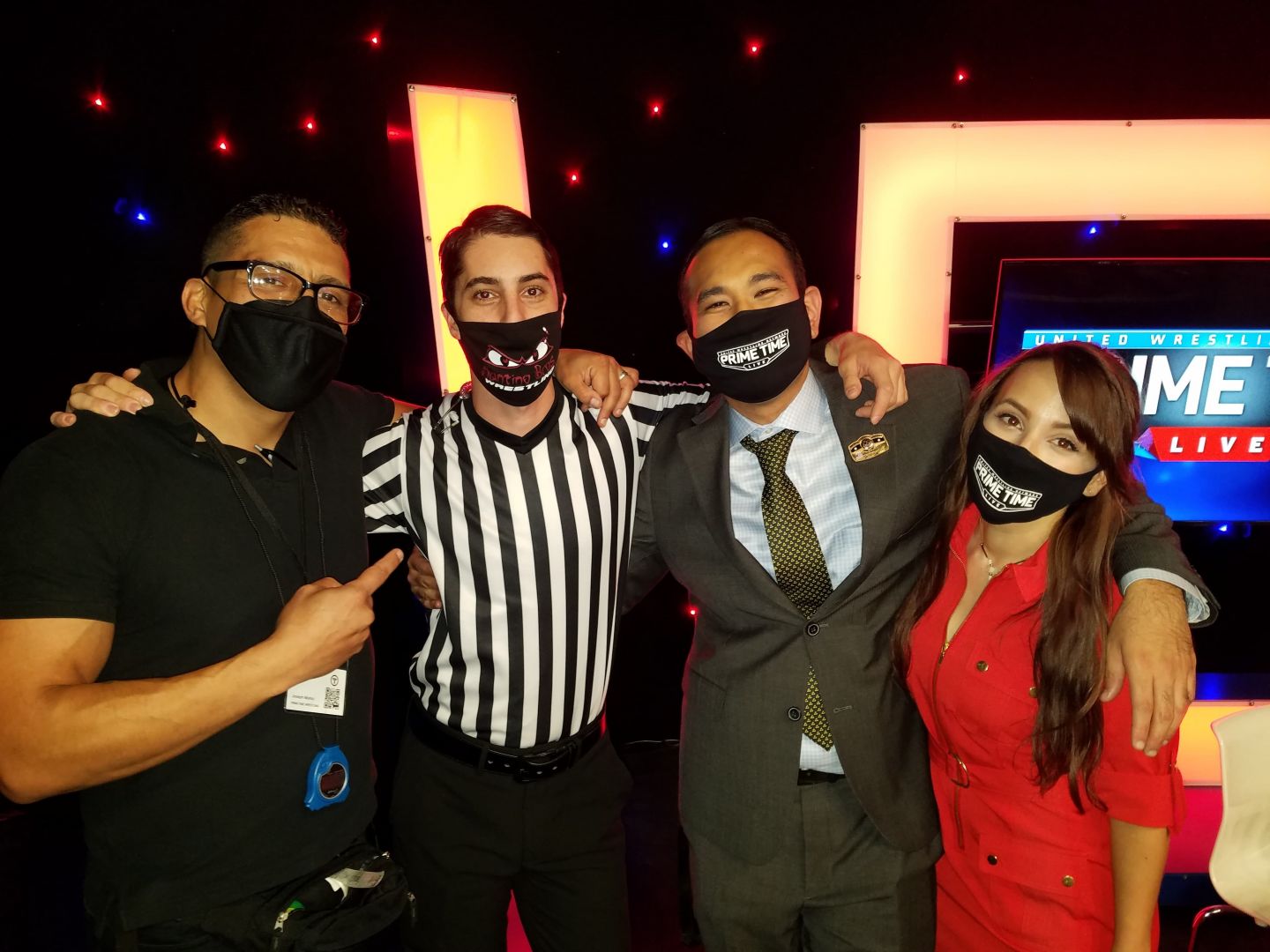 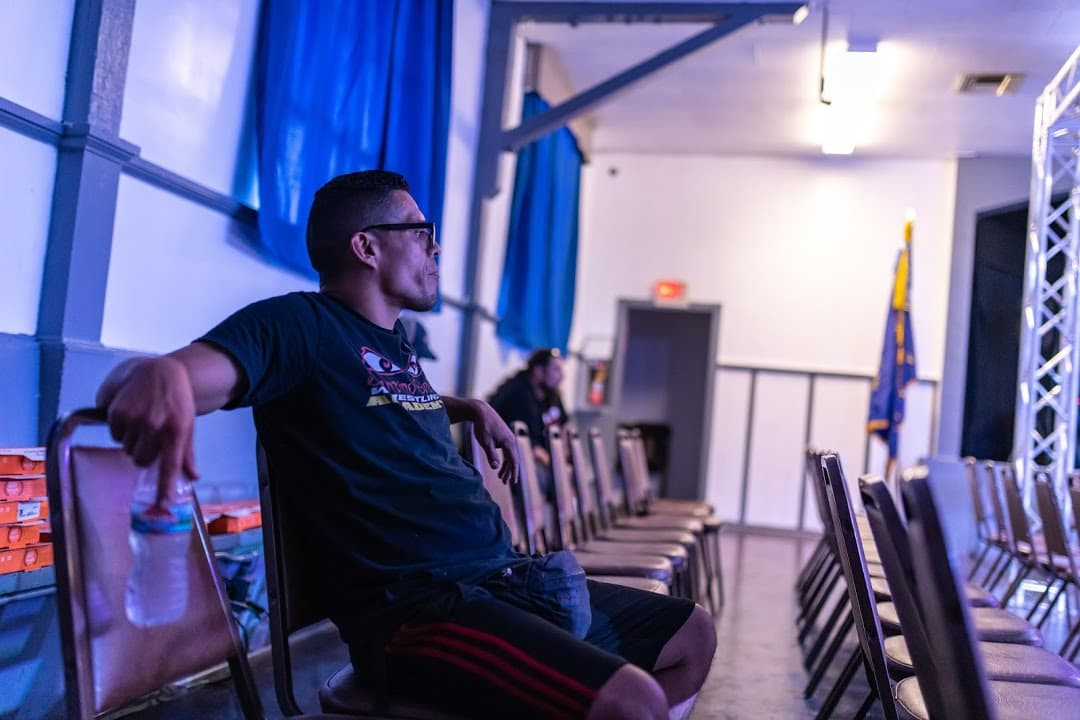 Can you give our readers an introduction to your business? Maybe you can share a bit about what you do and what sets you apart from others?
Santino Bros. Wrestling originally started out as a Submission Fighting Tag Team of Kaos and Mongol back in 2004. The duo’s most notable feud was vs La Familia De Tijuana Damian 666 and Halloween. Fun fact: In 2005 The Young Bucks made their debut vs The Fighting Santino Bros. Kaos and Mongol at the Grand Olympic Auditorium in Los Angeles, CA. Dynamite DOn April 11th 2007 Joey Kaos’ friend and mentor Darren Dynamite D McMillan passed away due to complications of cancer. One of the last things Darren told Joey was “you gotta Keep the Dream Alive”. And that’s just what Kaos and Mongol did. In late 2007 an opportunity arose where they could give back and they ran with it. What we are about. Santino Bros. Wrestling Academy started out at Rico Dynamite’s house in Norwalk, CA. Back in 2007 Rico and his roomate Johnny had an unofficial school going with about a dozen students. Feeling they taught their students all they knew but wanted to get them more training, Johnny and Rico approached Joey Kaos asking him to help them out. So in January 2008 Joey Kaos officially opened Santino Bros Wrestling Academy in a backyard in Southern California dedicating the school to long time friend and mentor Dynamite D who passed away the year prior. Pro-Wrestling-School-Training Kaos brought Mongol, Supreme, Angel, Robby Phoenix and BC Killer to help with the training, but in reality is was a elimination process. The 6 trainers drilled each student, testing their stamina, heart, passion, will, desires and need to be a Pro Wrestler. To their surprise only a few students dropped off and the majority remained. For the next 2 years Santino Bros opened its doors to the public, getting alot of dreamers but only gaining about 4 new students to add to our legacy. In June 2010 the city of Norwalk, CA. gave Santino Bros Wrestling Academy our walking papers. Two and a half years of hard work came to an end due to a city ordinance. It was a sad day and we thought it was going to end. We had built a camaraderie, we considered ourselves family and we felt lost at the thought of no more training facility. We could have let go, it may have been easier, but to be honest quitting the school was not an option. Joey Kaos had promised long time friend and mentor Dynamite D that he would “Keep The Dream Alive” and that’s what they did. Taking a huge risk, in July 2010 just 1 month after getting the boot, kAos rented a small warehouse in Bell Gardens, CA. We began our journey as an official Training school. It hasn’t been easy, we came very close to shutting the doors in 2010 and 2011. Since then we are finding our way and look forward to hitting our stride as THE must go to Pro Wrestling School in the World. We’ve proven we are competition and are here to stay. In September 2014 Santino Bros. Wrestling had it’s largest enrollment to date with 24 new Students, enabling the dojo to open it’s doors 2 more days per week. Adding to the growing legacy that is Santino Bros. Wrestling Academy The next 6 years proved to be our glory years as we really solidified our name in the sport of professional Wrestling. We’ve had 6 straight rookies of the year from 2014-2019, multiple students signed to national contracts. and Santino Bros. was even the training ground for Ronda Rousey’s WWE debut. 2020 was to set to be our best year yet, but unfortunately SBW has been on a hiatus due to the global pandemic of COVID-19. In efforts to keep the dream alive we introduced and now have implemented our Online course to our full program. The pandemic has given us the opportunity to explore avenues we may have never considered before. Santino Bros. Wrestling Academy is the elite Pro Wrestling School in Southern California. We have wide diversity of dedicated trainers who instruct the next generation of Sports Entertainers and athletes. We opened our doors in January 2008 introducing a new type of training center, a place where a student can learn various worldwide styles of Professional Wrestling and Sports Entertainment right here in Los Angeles, CA. Santino Bros. Wrestling is the leading professional wrestling training company supplying not only talent and knowledge but also equipment and locations rentals and Live Events for several differing productions. We have a vast knowledge in Submission Grappling, American Strong Style Wrestling, Lucha Libre, Wrestling for Television, Cardiovascular & Mental Endurance, Character Development, Improvisation for Sports Entertainment, Ring Crew breakdown & set up, Locations Manager, Fight scene consultation, Nutrition & Fitness, Wrestling Event Security, Marketing and Promotions for the Pro Wrestling Industry. Santino Bros Wrestling Academy has earned the notorious reputation for really bringing the pain! We are hard hitting, fast paced and in your face! Only the strong survive here at the Santino Bros Wrestling Academy, it’s not for the weak, the faint of heart, the timid or the cowardly. We have a raw passion for the spirit of professional wrestling, it is in our blood, it is in our hearts, it consumes our soul. Pro Wrestling isn’t a “sometimes” thing here for when you are bored with your life or just in between girlfriends/boyfriends. At Santino Bros Wrestling Academy, we’re in it to win it.and so should YOU!! 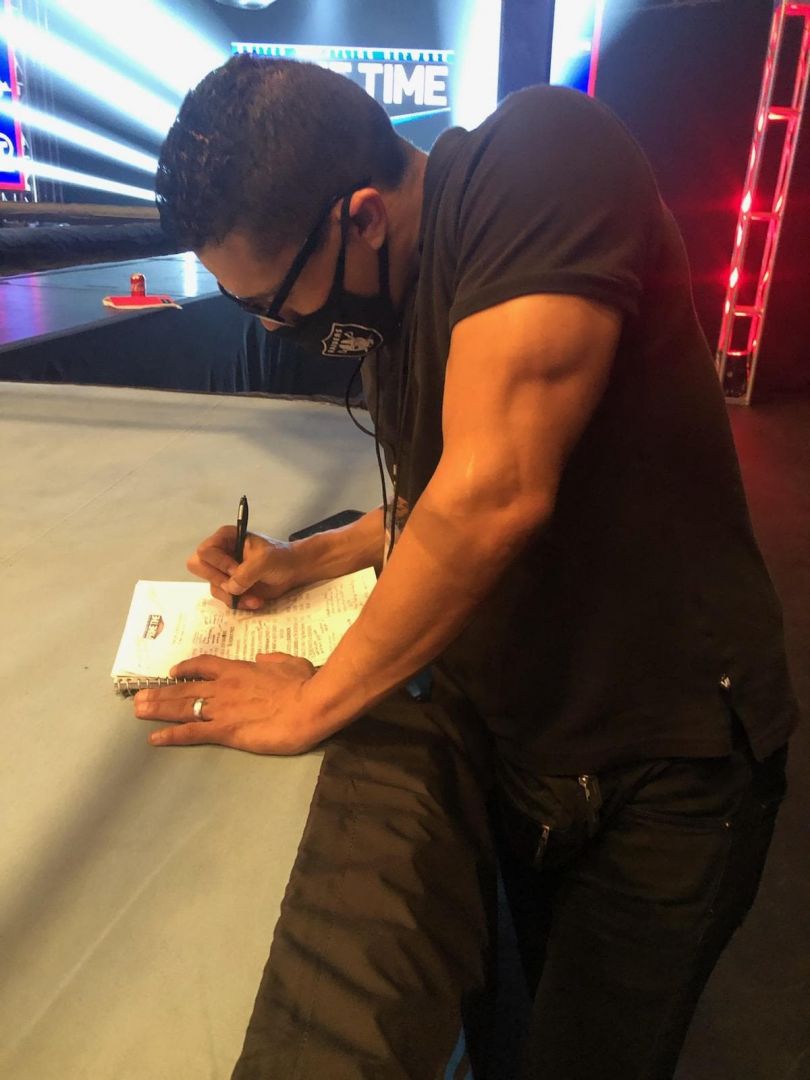 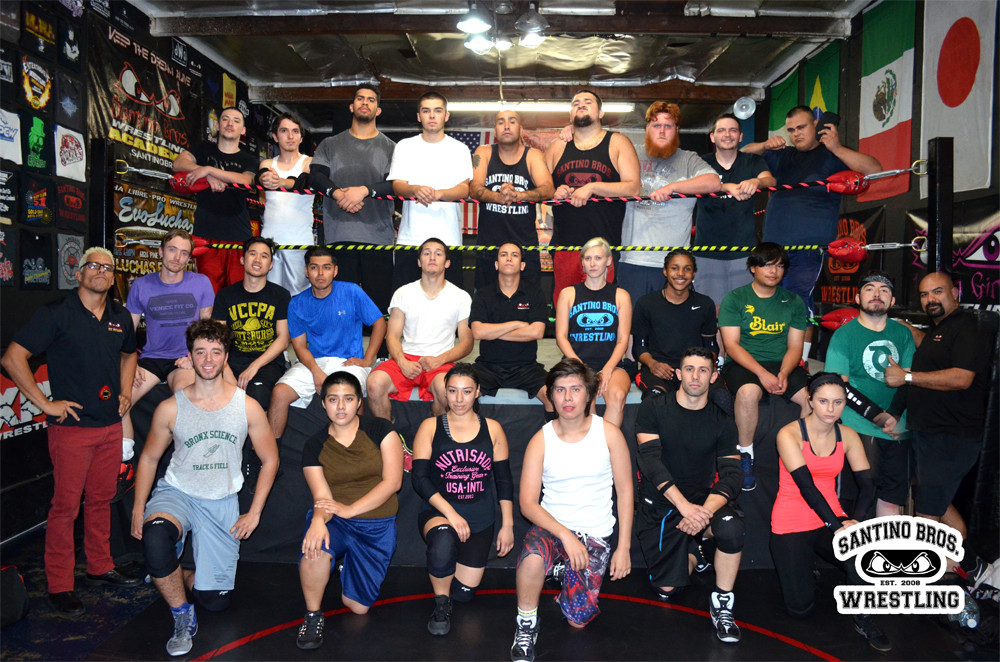 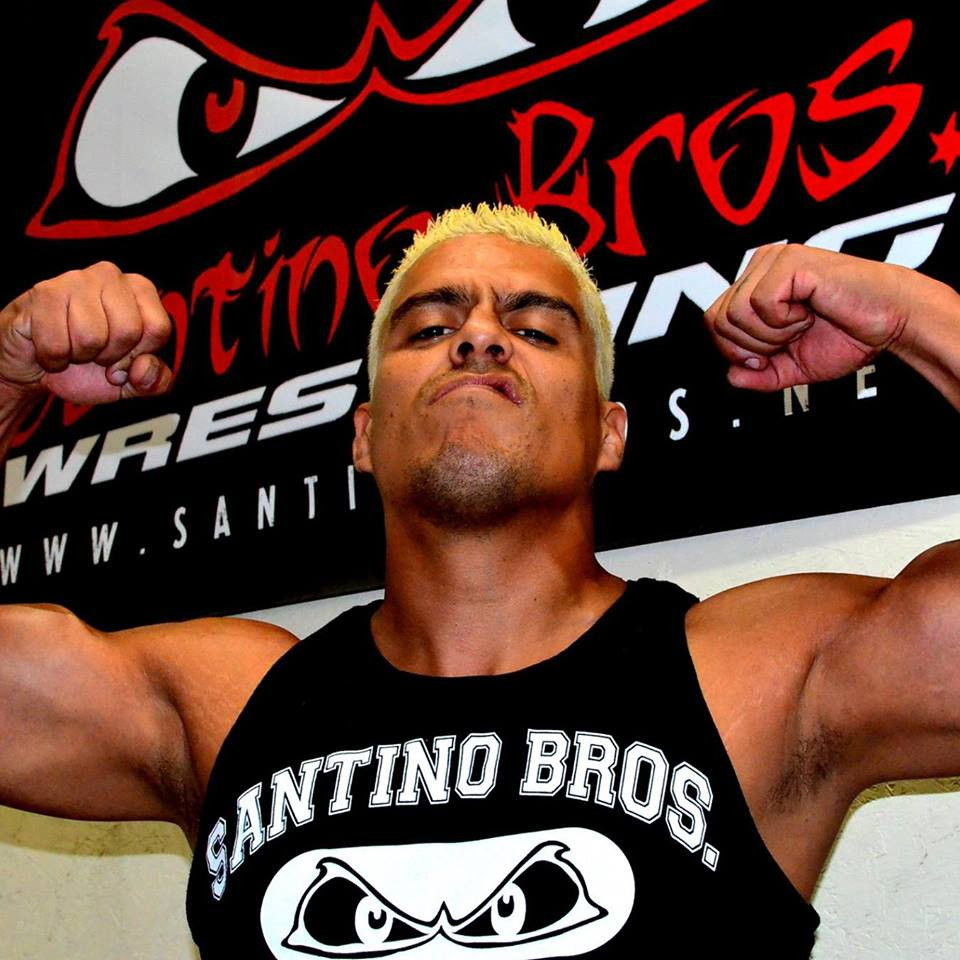 Any places to eat or things to do that you can share with our readers? If they have a friend visiting town, what are some spots they could take them to?
Hollywood, Venice Beach and East LA.. If you’ve never been to Hollywood, i can’t see any out of towner not wanted to go. We’d to to Musso and Franks for a med rare steak. Venice beach cause most want to see the water, plus we can work out at Golds which there’s nothing better than soaking up some sun while hitting the weights. And finally East L.A. cause how can you come to Los Angeles and not have the best street tacos in town. It’s a no brainer. 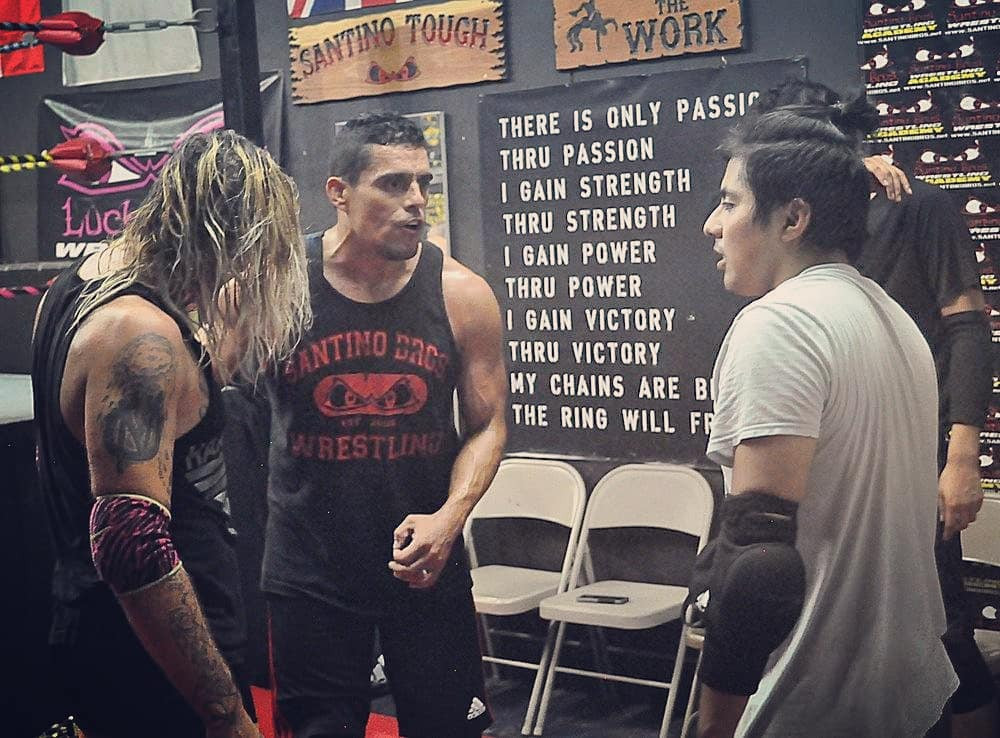 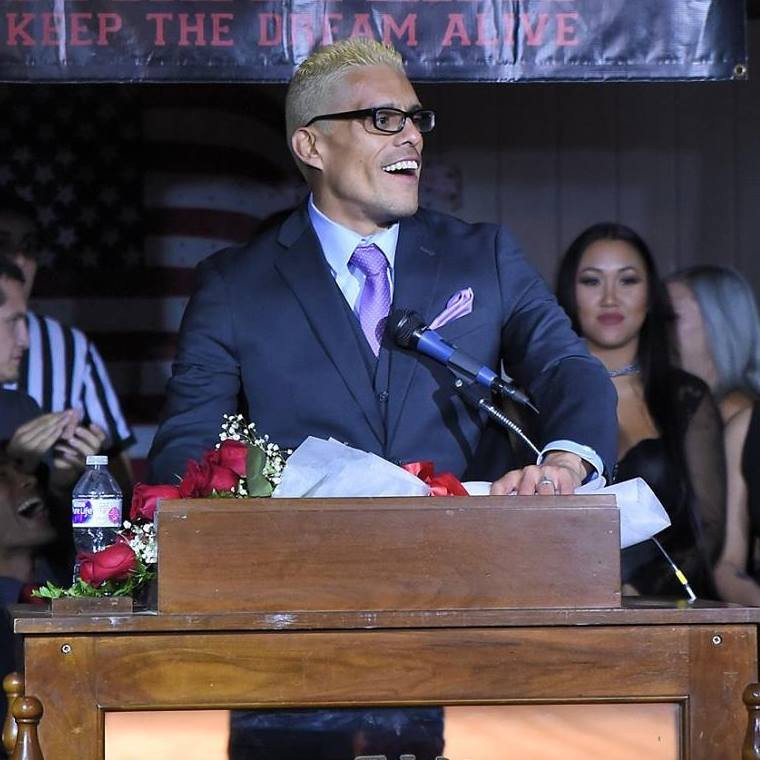 Shoutout is all about shouting out others who you feel deserve additional recognition and exposure. Who would you like to shoutout?
My uncle Lester Perfors aka Supreme. If not for Supreme, I’d never have had the opportunity to live my passion. Supreme is an OG if not THE OG when in comes to Deathmatch Wrestling in the United States. He’s done so much for so many with so little fanfare, he’s my solid foundation in Pro Wrestling and sadly he tragically and suddenly passed away this past May, which has crushed me. REST IN POWER SUPREME