We had the good fortune of connecting with Kim Manning and we’ve shared our conversation below.

Hi Kim, why did you decide to pursue a creative path?
I was 4 or 5 years old and swinging on the swingset in my backyard. I was singing “rock a bye baby” and then the song ended and I ran out of words to sing. I looked up at the sky and just started singing about the birds, and the clouds and the trees. I was immediately filled with this great bright light and I jumped off my swing set and ran into the kitchen to tell my mom that I knew what I wanted to be. “I’m going to be a singing actress” I told her. It’s one of my youngest memories and one that my mom also remembers with the same lucidity. 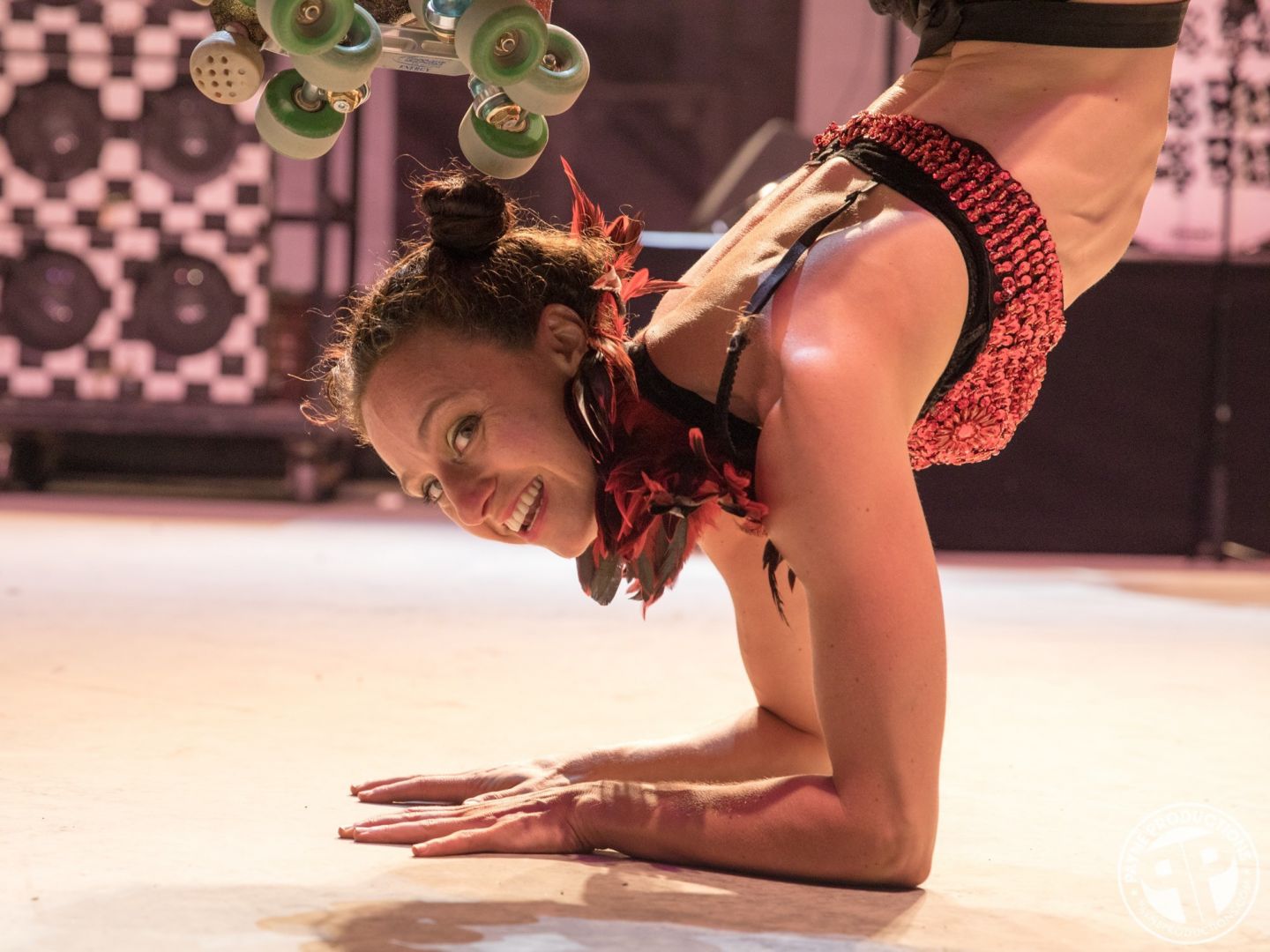 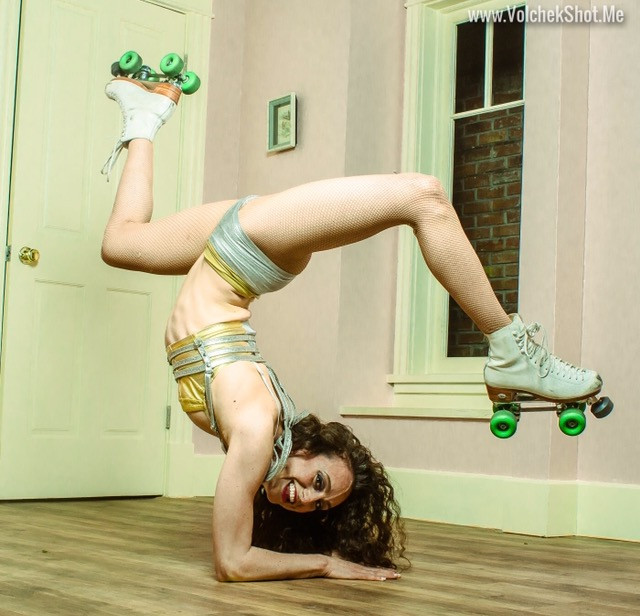 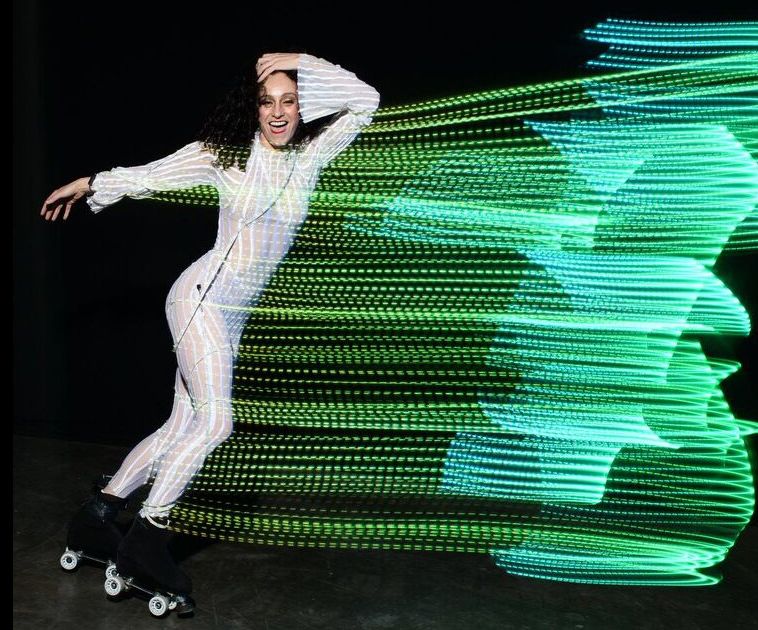 Let’s talk shop? Tell us more about your career, what can you share with our community?
I was raised on a red dirt road in Oklahoma and headed to my future with nothing more than rollerskates and dream and $50 in my pocket. From the pivotal point that I realized I wanted to be an entertainer at 4, I pursued my entire childhood to become a star from my lil village in Ponca City, Ok, and it truly took the whole village.

I began rollerskating at age 3, at 5 yrs old I began taking “artistic rollerskating lessons” which is the equivalent of figure skating on rollerskates. My mother was a single parent who worked for the post office. We would put up jars at the gas stations around town with my picture and a note to collect quarters so that I could pay for lessons, and used Rollerskates. I became a state and regional champion despite the used skates and home made costumes by the time I was 12. In that time frame, I also began my interest in music.

When I was 6, my sister started orchestra and I convinced my mom to get me a violin at a grange sale so I could sit next to my sister and practice. When I was 9, I entered the local talent competition and from their began to win scholarships for the local voice teacher, and later a dance school, Kem’s Gym, took me under their wing and taught me to dance and also introduced me to music theater. I will always remain grateful. With Scholorships,  I was able to attend the University of Tulsa where I studied Music, Theater, and Dance.

I worked for the Light Opera of Oklahoma after graduating for a summer and then headed out in Volkswagen bus to fufill my future. We were traveling street performers, with hand drums and harmonies. On the trip I met a close friend of George Clinton’s who insisted I met him.

Months later I had settled in Northern California and was invited by that friend to attend a Funkadelic show at the Warfield in San Francisco. Here I was overwhelmed with the possibilities, I could immediately see myself singing in the group and literally passed out at the thought. I woke up being carried out by my then boyfriend feeling like I was floating and covered in sparkles and star dust. The following week I had an audition for a music theater company in Los Angeles so I headed down, ironically George Clinton was also playing the House of Blues so after my audition I went to the show. They had 3 Southern California shows and I joined them all.

After the shows, Shock G, from the digital underground was holding lil jam sessions in the hotel so I went and just sang. I think I was just making up stuff and I definitely didn’t understand that I should have been intimidated. The next day I met George and he brought me onstage. I actually just danced, like a funkadelic ballet duo with George and then he bowed me like a baptizing and within 48 hours he had found my moms phone number in oklahoma and I was in the studio. I honestly just sang whatever I heard everyone else singing and they just loved it.

The next day I was on the red carpet in my Birkenstock’s and a dirty T-shirt with Bootsy Collins, BucketHead and George Clinton that night I was recording at Marvin Gayes Studio singing under the original 2 inch tapes.  It was a whirlwind from there. I began touring with George Clinton and Parliament Funkadelic in 2000 and I traveled the world with them doing up to 250 shows a year until 2015. During this time, I began to have dreams of rollerskating and I always felt so happy so I had my mom send my skates to me and George immediately had me also skating in the show. I sang and rollerskated all across the globe from big festivals like Glastonbury, Roskilde, Montreax, Nice, and New Orleans Jazz fest, to tv shows like the Grammy Awards, Jay Leno, Carson Daily, and David Letterman, I was able to sing and skate and touch millions with George. In that time frame I also released 4 solo albums, portrayed myself as “Peachez” on “Flavor of Love” and toured nationally with my own band “wahnderlust” including regular performances at Burning Man, Lightning in Bottle, and residences on the Sunset Strip at clubs like The Viper Room, the House of Blues Foundation Room, and The Knitting Factory where I ran an all improvised music jam called “Jam Factory”.

After three years of only seeing my apartment for 10 days out of the year, I finally decided to step away from Funkadelic and focus on my solo career. At that time I had started singing and writing with Oakland based producer, G Koop, prior to him becoming the multi platinum Grammy award nominee that he is today (Los Migos, Katy Perry, Rihanna, Atmosphere, 2 Chains). With G Koop I was able to sing on billboard hits with Atmosphere, and Future and have since been a regularly featured artist on Atmosphere records. We also recorded an upcoming album on me.

At the same time, I began acting again and got a job for an Apple commercial where I was introduced to the Los Angeles rollerskate scene and my future stunt partner, world champion Trey Knight. The training I had been taking as an Aerialist and my decades of skate training all came into play and soon Trey had my flying thru the air spinning by neck off his neck. We represented our sport in Toyota’s 2018 Olympic Campaign and toured the nation with Lagunitas Beer Circus, Lucent Dossier, and Elan Artists. I also continued to act and do stunts in film and tv and was featured in shows: Lady Dynomite, Kidding, Crazy Ex Girlfriend, featured in a Dave La Chappel Revelations Campaign, and Strange Angel where I was nominated for the Sag Aftra Background Awards as Best Female Actress. I also started a professional rollerskate performance group the Royal Rollers. Although my music career was seemingly taking a background I was still working with G Koop and finishing a new album.

When Covid hit and all of hollywood closed down as well as live events, I decided to temporarily return to oklahoma to help my mother who is on oxygen. In that time frame Rollerskating became the trend and one day I just put out a tutorial to try to explain the importance of edges in skating and from there things began to blow up. I starting putting out a short tutorial a day and using the #sk8likeapro. Within in months my Instagram grew from 13k to nearly 70k with similar growth on my tik tok, pinterest and youtube. I also began writing and producing silly rollerskate safety songs with my most recently released one at 1.7 million views on IG and  still growing.

In order to better serve the burgeoning community I created a full length completely comprehensive progressive based rollerskate system. It’s called, Sk8likeapro.com. It’s the first of its kind and I made it because I realized that people all over the world did not have access to the technique of rollerskating. Within 48 hours of launching and without any advertising outside of a simple post on Instagram I had over 2000 visitors from literally all over the world! I’m currently working on a follow up program that will be roller pole pro (pole dancing with rollerskates on).

It’s hard to know what the future holds for entertainers. My goal is to get back to my music and incorporate my rollerskating. I plan to begin to release my first single from my new project within the month. 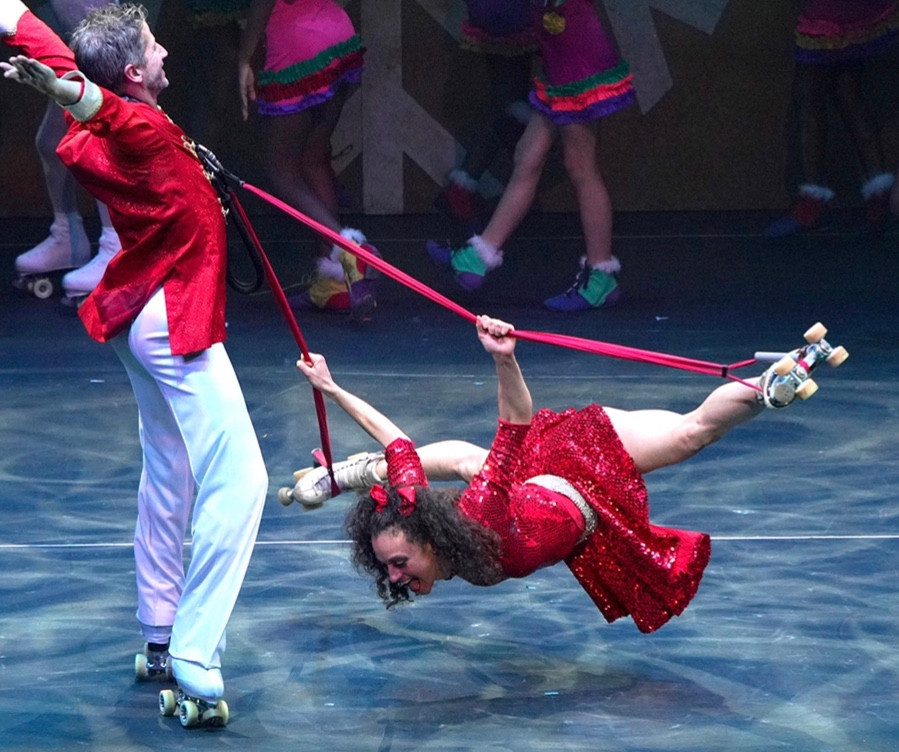 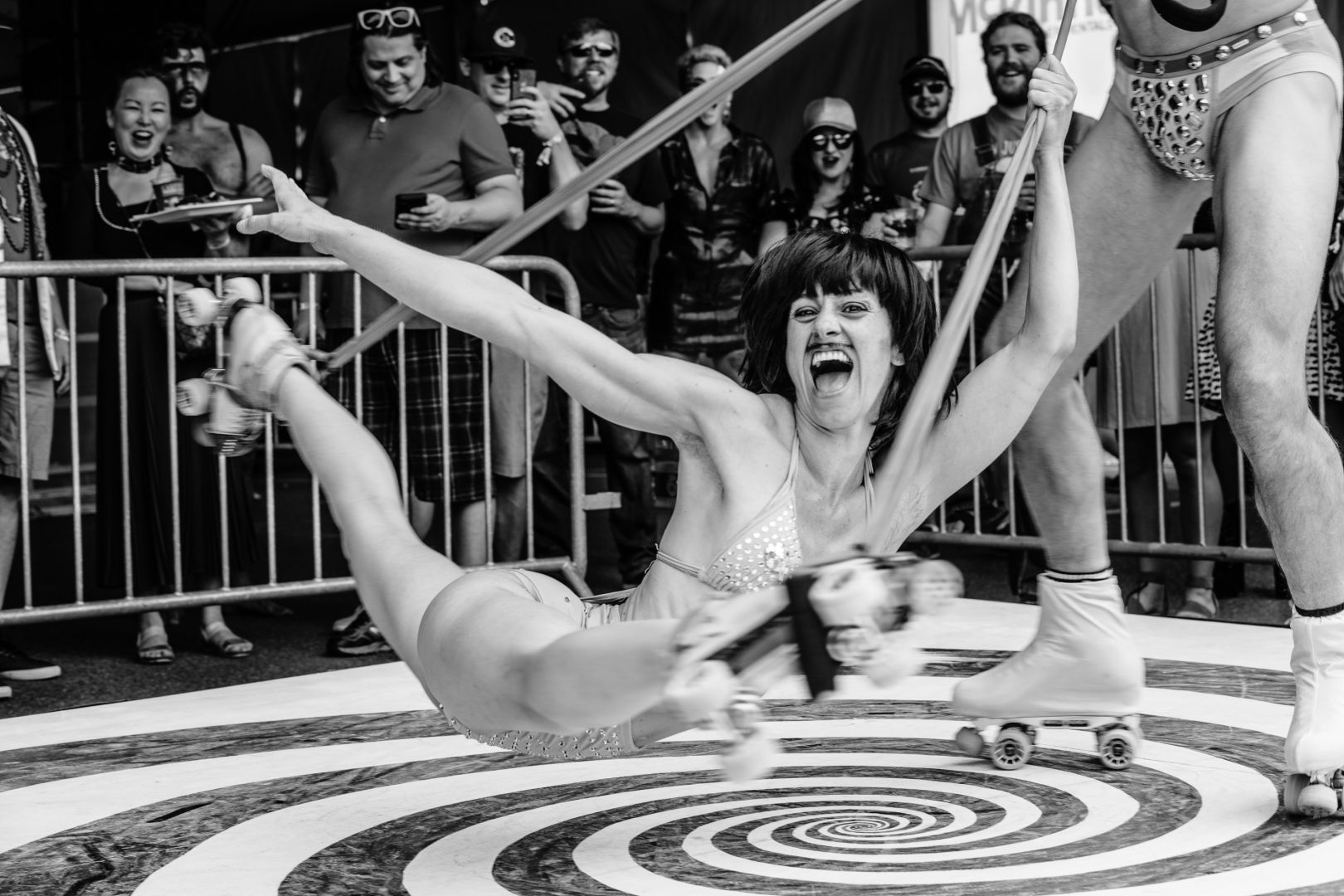 If you had a friend visiting you, what are some of the local spots you’d want to take them around to?
I would take my best friend on a California Hotsprings Tour. First we would head down to Glen Ivy Hotsprings, Stop at Mercy on the way to Northern California and end up at Harbin Hot Springs where we would spend the rest of the week car camping, hot spring soaking, meditating, and organic food eating 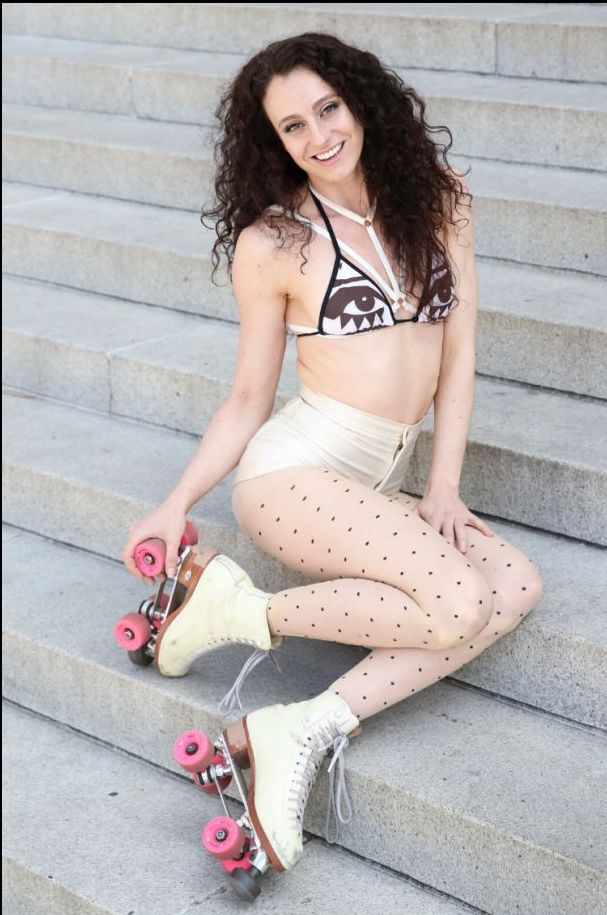 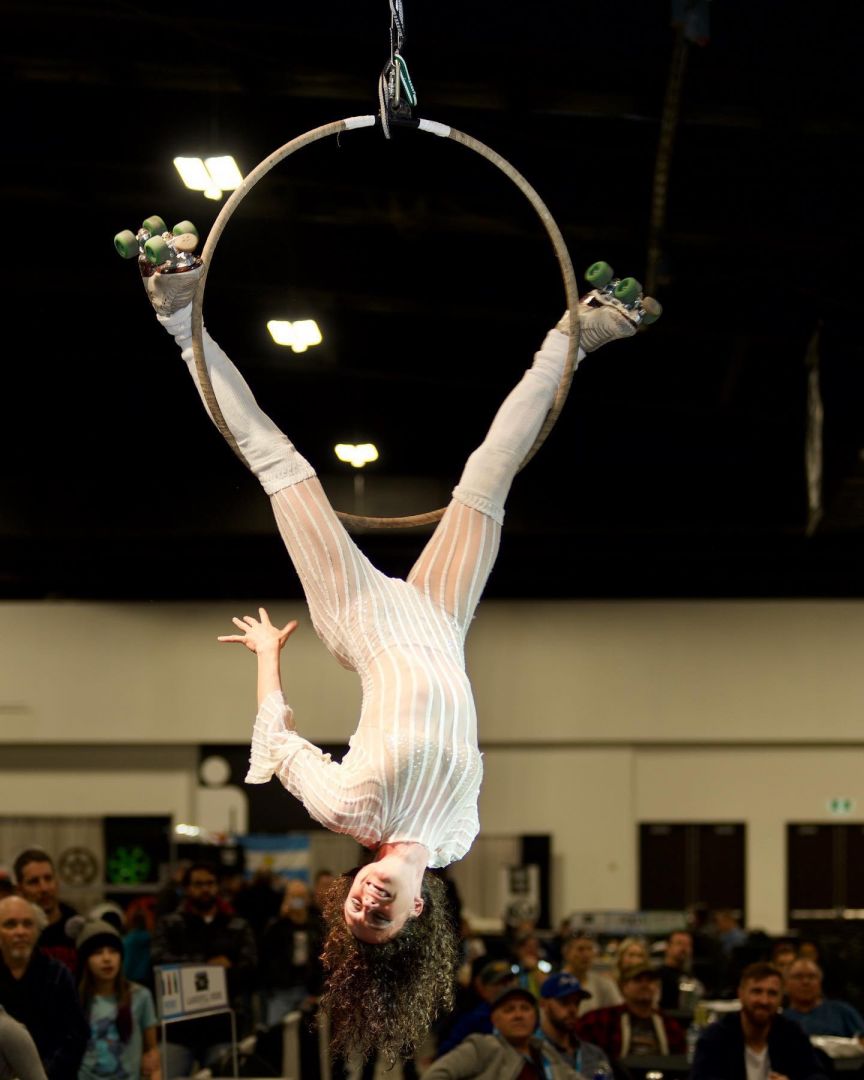 Shoutout is all about shouting out others who you feel deserve additional recognition and exposure. Who would you like to shoutout?
My mentors include: G Koop (my current producer) George Clinton (my old boss) Trey Knight (My Current Rollerskate partner)