We had the good fortune of connecting with Mike Collins and we’ve shared our conversation below.

Hi Mike, what was your thought process behind starting your own business?
When we opened ShockBoxx we were sailing on more momentum than thought. Hermosa Beach was fresh of the heels of a large community movement that lead to the overwhelming defeat of an oil drilling initiative that was on our ballot. Oil drilling defeats don’t always lead to the opening of art galleries, but in this case, the community coalesced around the battle and art and creativity were always at the forefront of this effort. I live about 500 feet from the space that was to become ShockBoxx, and when the building became available, we took the space as what we thought would be a lockout studio. Once we cleaned the place up we realized the potential to begin hosting art shows. From the beginning, our mission was to reach beyond just our local community and to get involved with, and attract a larger art community into Hermosa Beach. I guess then I’ll say that the initial thought was that we were going to reach beyond what we were comfortable with and see if we couldn’t attract the rest of the world to tune in to what we thought possible. 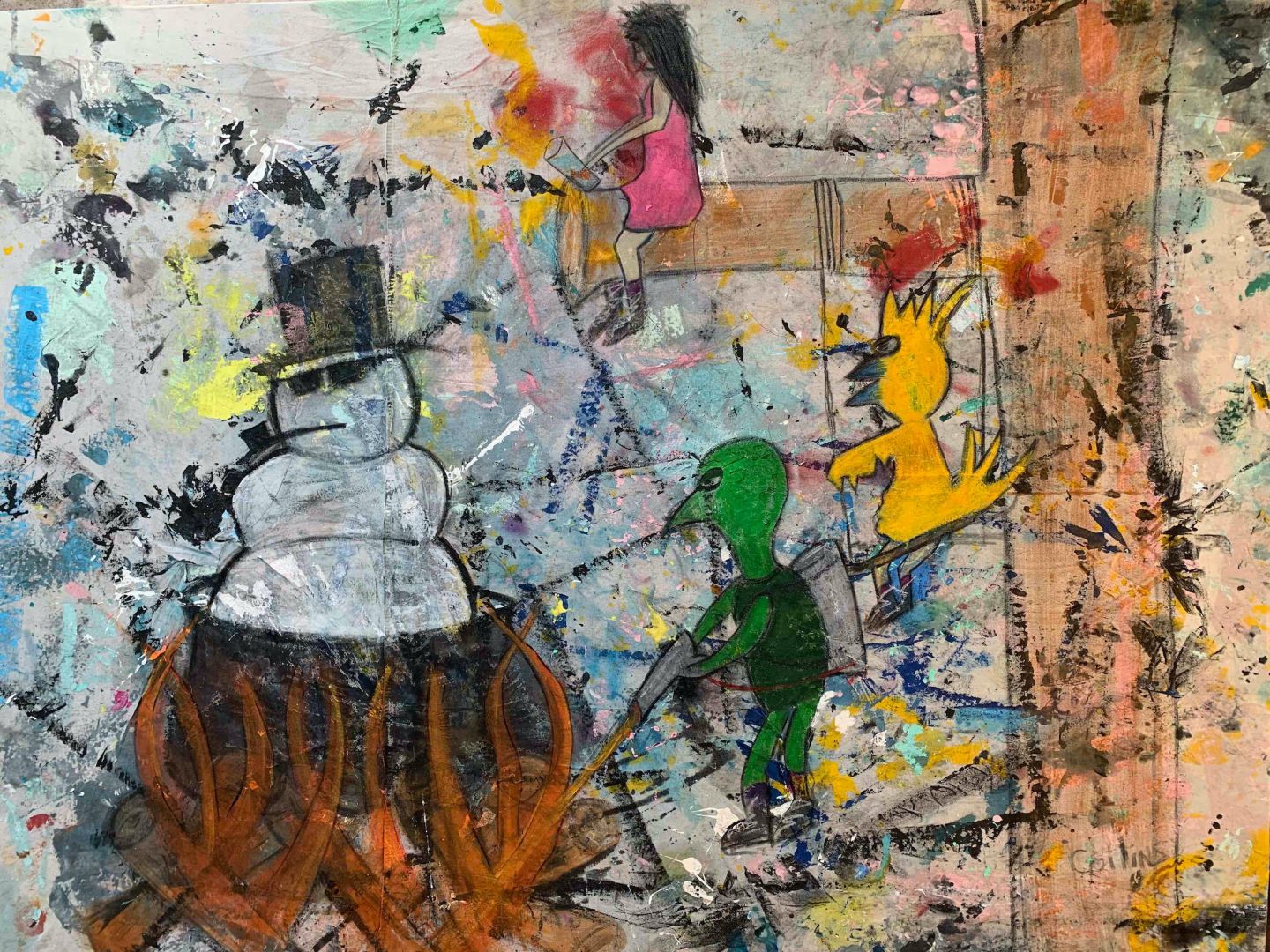 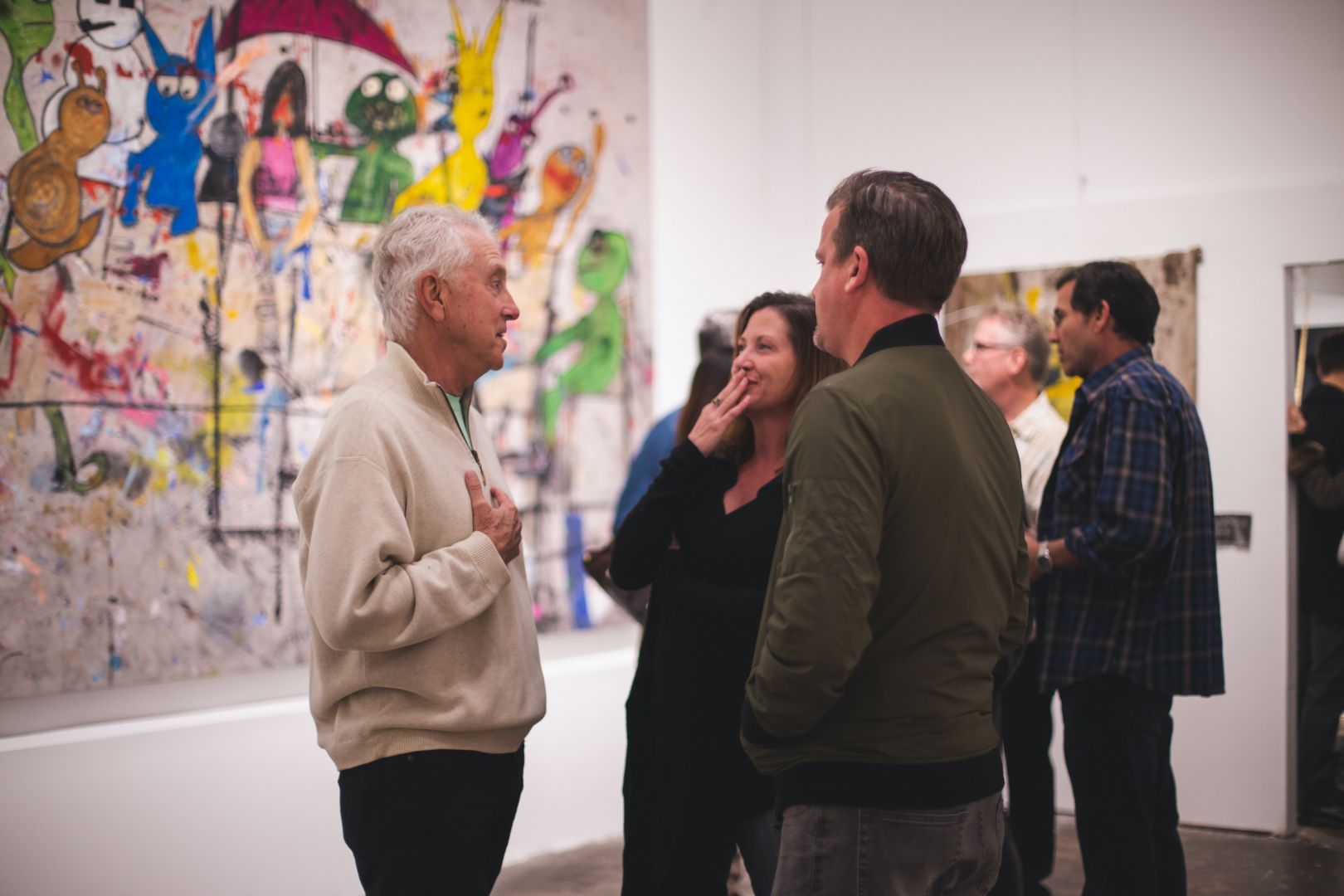 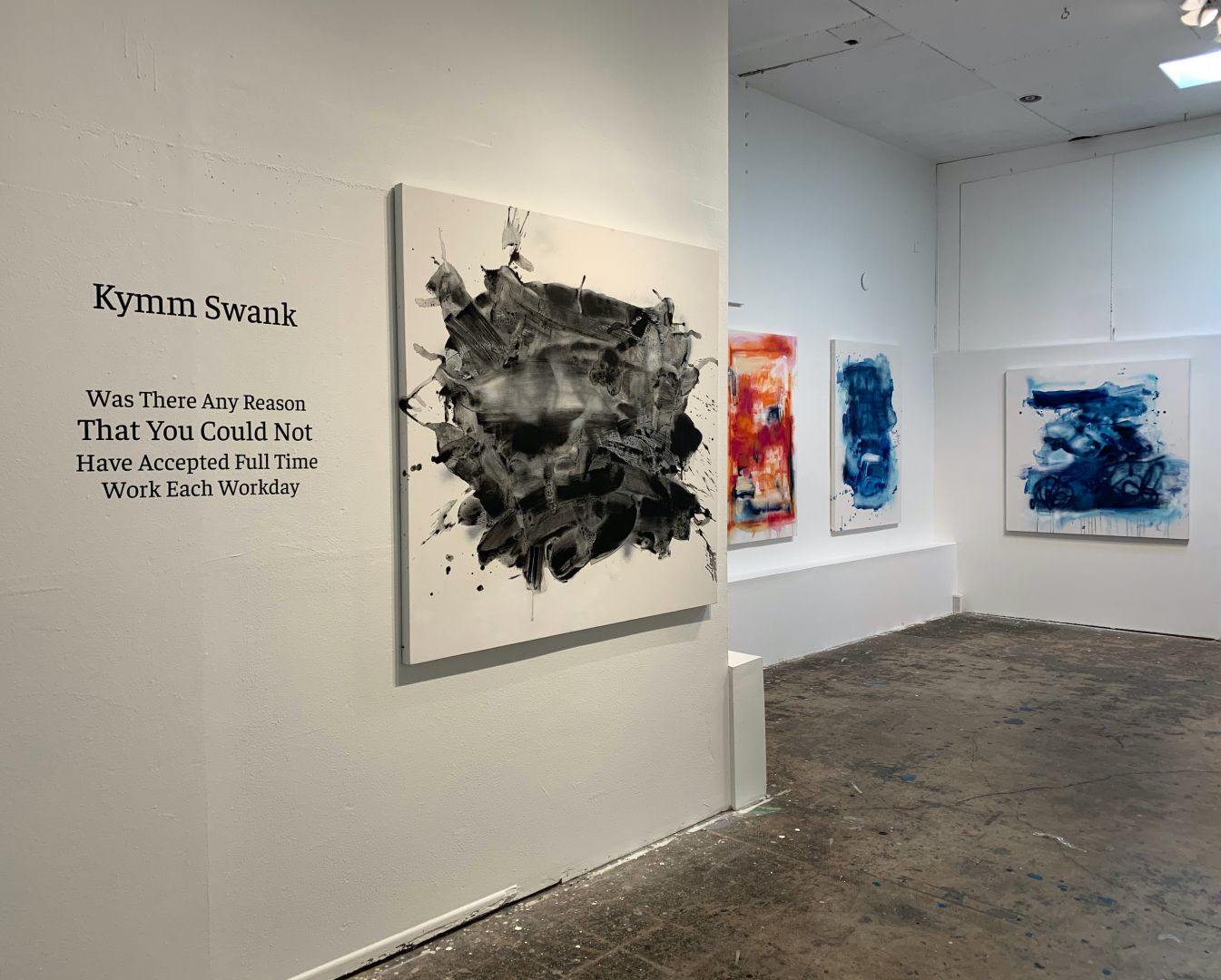 Can you open up a bit about your work and career? We’re big fans and we’d love for our community to learn more about your work.
When we opened ShockBoxx, my personal creative work began to shift dramatically. The benefit of owning a gallery is that I immediately realized that I didn’t have to try and be in every art show that came along. Curating other shows, meeting artists outside of my bubble, and ultimately watching how artists that I know and respect approach solo shows caused me to slow down and think about what I wanted to do moving forward. I’m excited about the potential of what began with my solo show from last year, “The Funeral Party.” I went into making work for that show with the goal of creating a cast of characters that exist in a world with a story that I can get lost in. The characters began with a few that I am familiar with, but the last piece I painted for the show is an 8ft x 12ft work called, “The Last, Last Supper.” This piece is where the ease, challenges, lessons learned and direction I want to head all revealed themselves. I painted a cast of characters into this piece that I can spend the foreseeable future working with to discover who they are, what they represent, and finally, what they have to say. I kept this piece hidden from most everybody because during the process of creating it I fell into a feeling that the work and the show I was about to roll out was one that I was going to feel so raw and nervous about presenting to the world. Nothing was a pretty painting that would look good above a sofa. With that show, and this work, there was nowhere left to hide. For me, that’s the lesson learned right there: Put what you gotta put out into the world. Don’t worry about the public result and the rest will take care of itself. 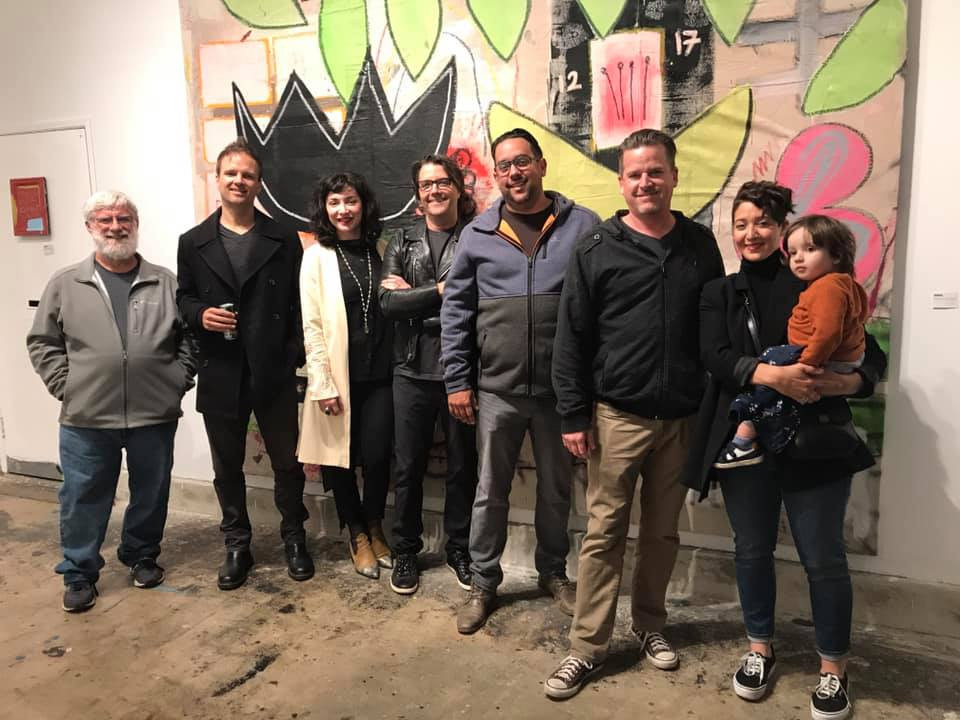 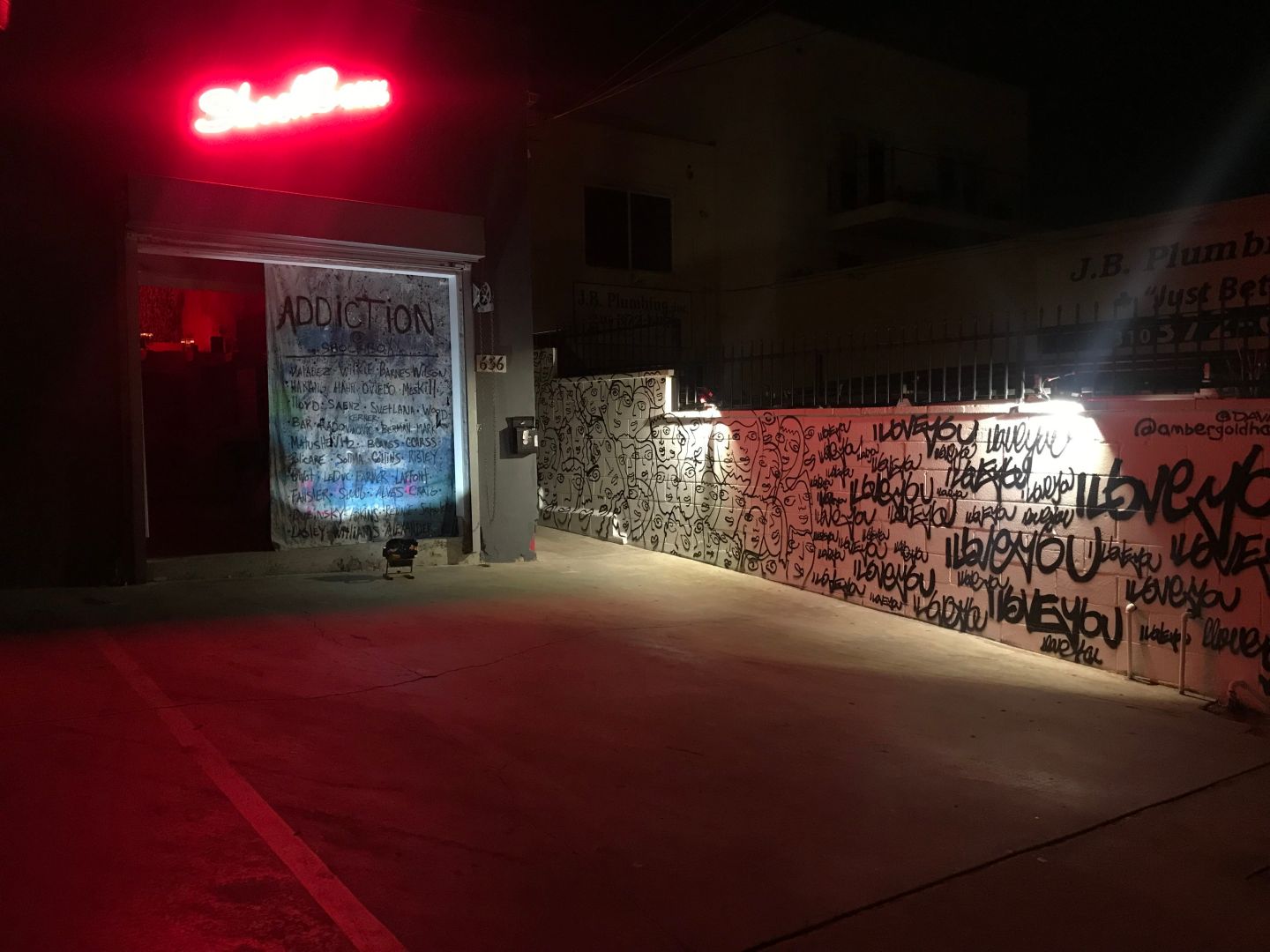 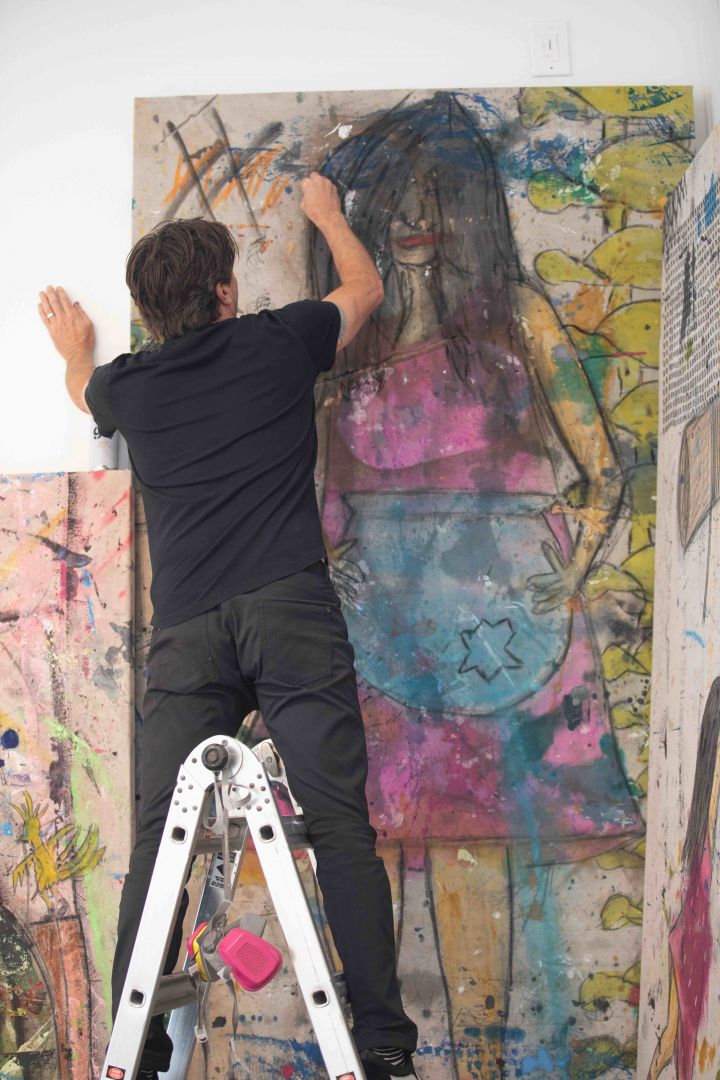 Any places to eat or things to do that you can share with our readers? If they have a friend visiting town, what are some spots they could take them to?
I live in Hermosa Beach, which is a small beach town in Los Angeles, California. I’d start with a breakfast burrito from Amigo’s Tacos on Pier Avenue, then we’d walk around town and pop in and out of the local shops. There is a really cool small town vibe here that surprises people visiting. We are so close to the speed of Los Angeles but the pace here is really slow. I’d end the walking tour on Cypress Avenue by popping into one of the many surfboard shaper’s shaping bays and having them pick up a custom surfboard by Dan Cobley or Jose Barahona. If I get to write the full script for the visit, I’d take them surfing in the Palos Verdes Cove in the springtime when all the wildflowers are blooming. The walk into that place is like going back in time. At some point I’d take them to a ShockBoxx opening because I would want them to see the diversity of people and art we’ve attracted to Hermosa Beach. The capstone experience would be a Kevin Sousa Band concert at Nelson’s out at the Terranea Resort. Kevin’s band plays out there in the summer and the setting is surreal. I really don’t think there is a place that fits the Southern California prototype more. The venue is on a cliff overlooking the sea, Catalina Island, a lighthouse and completely smells like lavender and sage. It is kind of ridiculous how beautiful and idyllic the setting can be. 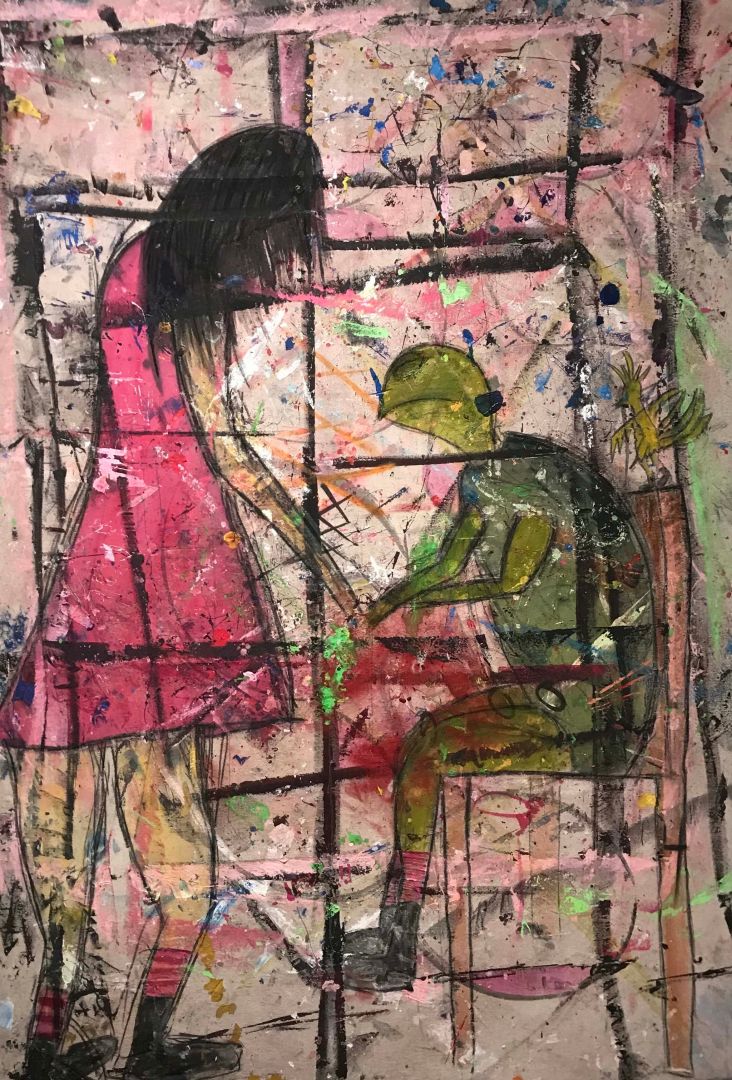 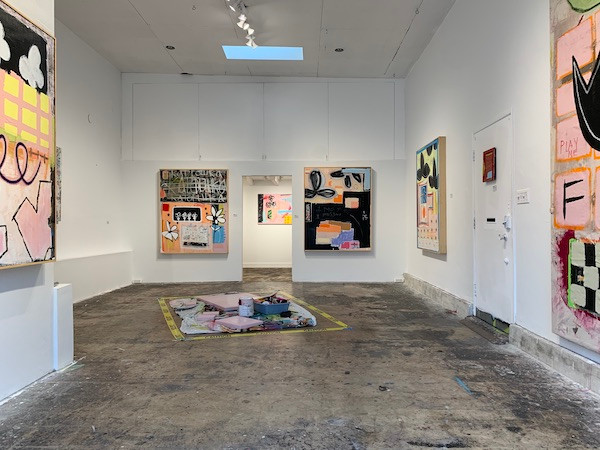 The Shoutout series is all about recognizing that our success and where we are in life is at least somewhat thanks to the efforts, support, mentorship, love and encouragement of others. So is there someone that you want to dedicate your shoutout to?
I feel most supported and encouraged by anybody who is willing to show up to the fight when most people are either sticking their head in the sand, or running the opposite direction. Some of these people have showed up personally, but sometimes just witnessing other people’s courage and commitment is enough to keep me moving forward. On the creative front, the artists of the ShockBoxx Program are an example of a group working toward something they believe in, and their commitment to our mission will keep me in the game. As a gallery owner and curator, I’d like to give credit to other galleries and curators that are open to working together and supporting one another. William Turner from William Turner Gallery comes to mind as a great example of this. When we were first opening, he overheard me speaking about the possibility ShockBoxx and invited me into a conversation about his beginning, what worked, and ultimately his phone number and encouragement. That’s the real deal right there: somebody established who is still willing to reach out to the new guy with time and encouragement.