We had the good fortune of connecting with Risto Miettinen (Risto R Muzik) and we’ve shared our conversation below.

Hi Risto, what role has risk played in your life or career?
“It’s better to regret something you did than something you didn’t do” might be cliche, but in my life I’ve found it to be true. I think we all have these fork in the road moments, getting in touch w someone who could offer you a gig, asking a girl out, moving to a new city or country, etc. if you’re actively thinking about making that choice, it’s probably a sign you want to do it.

Taking a risks has played a really big part in my life. Moving from Helsinki to London, then to Los Angeles. Also working as a film composer. These are all risks, but very rewarding ones. It’s been amazing to meet so many people from all walks of life, see so many places and work on so many different projects.

There’s also the pit of disappointments. A big part of taking risks is being wary that things can go south and accepting it. Becoming old and bitter is what I fear and I remember those kind of people from my childhood, who felt like drones going through life. Taking risks has made me feel alive and that I’m pushing forward in the world.

And life is filled with “should, coulda, woulda” moments. If you’re lucky enough recognize those moments and at night the demons of regret come to you saying “This feels like a good opportunity or you’ll regret it”. I’ve always felt like, it’s a sign to go for it.

At the end of the day, getting up in the morning is a risk? What’s the day going to throw at you?
What risks you choose or don’t take will define where you end up in life. 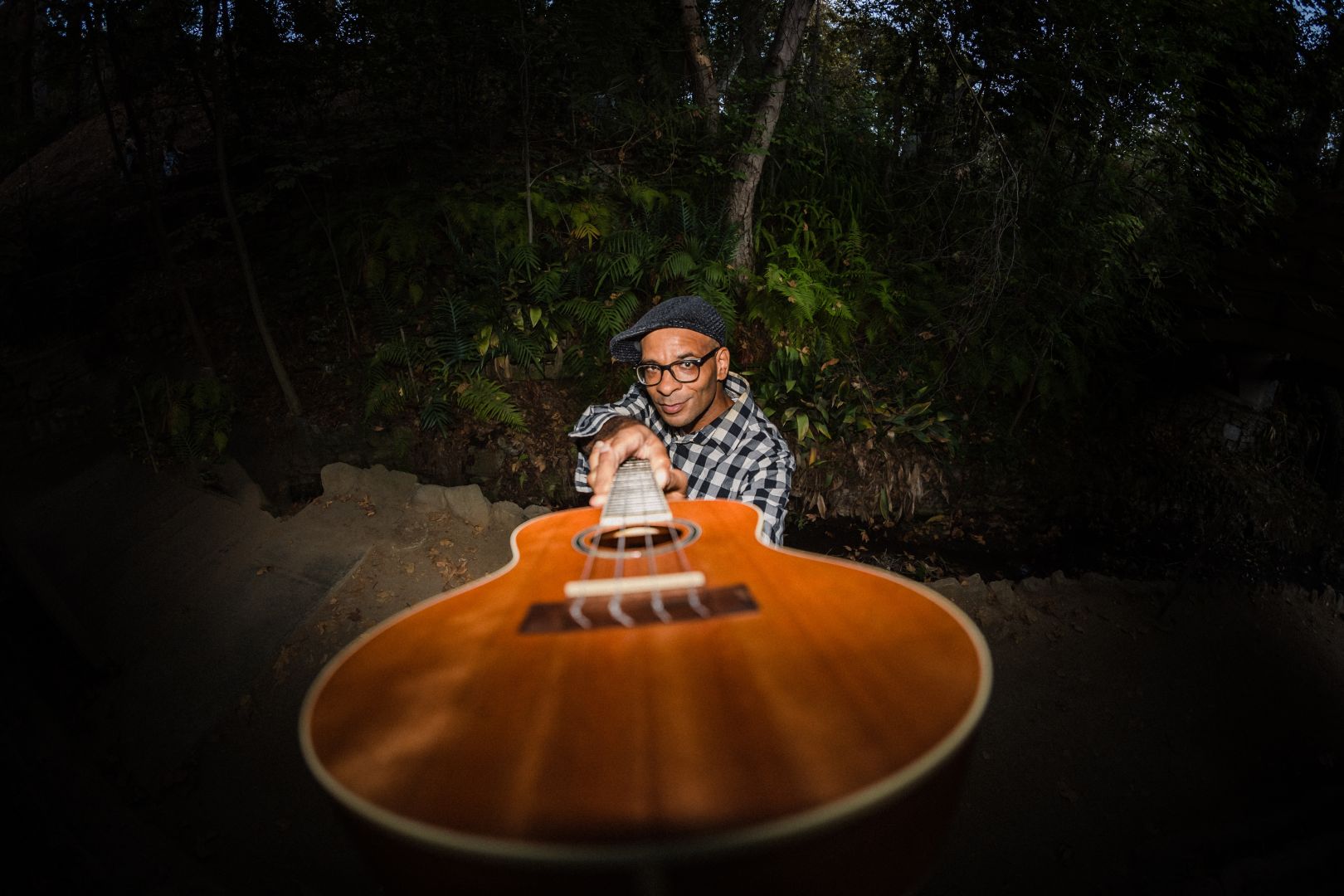 I’m a film composer, writing music for film and tv. My road here has meant sailing many oceans, walking through several deserts and clawing through a few jungles along the way. It’s come with many challenges.

I was born in Finland and grew up in Helsinki, then moved to London, England to study music, during University getting involved with film music and eventually making the leap across the pond to sunny Los Angeles.

Writing music for film is a very challenging process. The everburning questions being, should there be music, if so where in the film and what should the music be? Any type of media that you watch or use, from the news to video games to movies to on hold music, there’s numerous choices of music to choose from? What should the music be? Then moving onto why should you get the gig?

These are all tough questions, but at the same time they are the meat on the bone. That’s what makes it so much fun. Sitting down with a client, filmmaker or music supervisor. Starting to figure it out. What I’ve come to realize is that when you start nobody has a complete vision and you need to let it become what it’ll become. I’ll have an idea, the director or producer might have a few notes that I’ve not thought of. Then my interpretation of those notes will send the project into a new direction. And so the collaboration begins.

I’d say one of the biggest challenges, is being able to listen to others and not getting too stuck in my head about what the music should be. And being able to read people, especially when dealing with folks who don’t know musical terminology. For example, someone might say it’s too serious, but what they might mean is the brass is making it to too serious for them and the solution is to mute it. Solving it usually means listening and asking the right questions.

Hmm, I’ve got various moments I’ve been proud of, having music on the Super Bowl, music in a John Travolta Movie called I’m Wrath, music programming on the Sims 4 video game, music placed on The Daily Show and music placements on over approx. a 100 shows across the globe. It’s always fun to think my music is touring the world, whether playing on NBC in the US or the BBC in the UK. or MTV in Mexico.

What sets me apart, is that I love experimenting when possible. I’ve made music from Bumble Bees buzzing in jars, fish skeletons, cacti, hiring Death Metal vocalists for musical textures and using experimental techniques on the guitar.

That’s what I’d say to the world, when you can be experimental and push the boundaries. I’m really curious to see how augmented reality and the Metaverse will shape our world in the coming years. And all of it will need music. A good opportunity for innovation and experimentation. 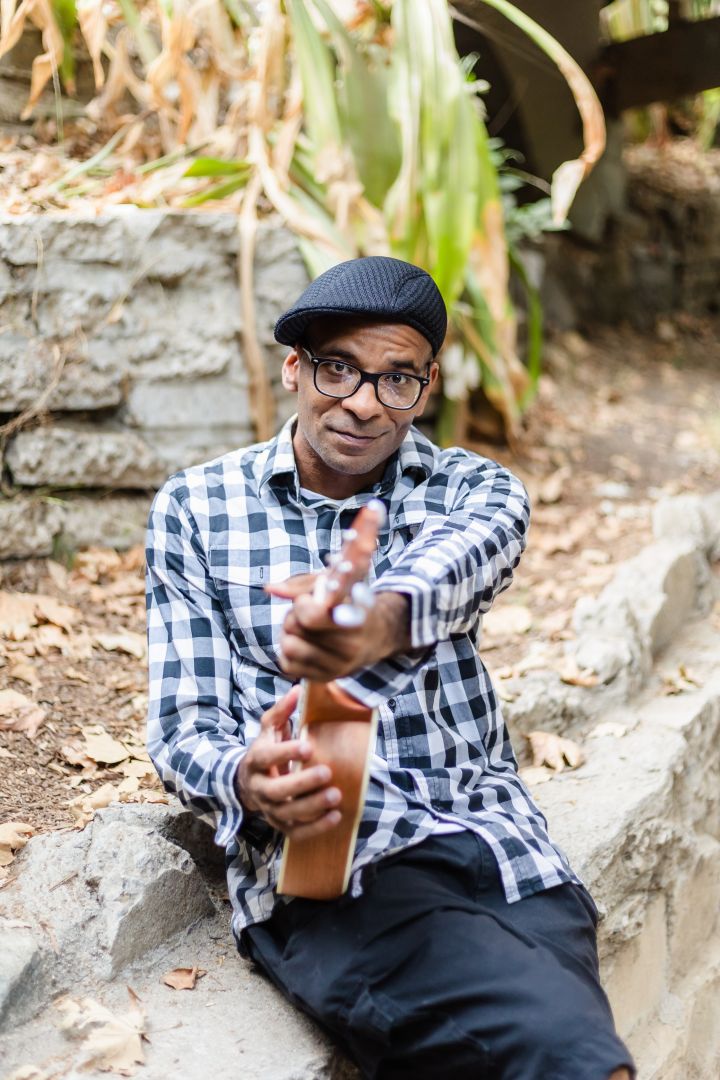 If you had a friend visiting you, what are some of the local spots you’d want to take them around to?
Very well, but we’re skipping some of the obvious stuff Santa Monica Pier, Walk Of Fame, Disneyland, etc

Mon – Starting off in Los Feliz at Cafe Figaro getting food & drinks, then checking out Vermont Ave w the Los Feliz 3 vintage cinema and shops. A stop at Y Que and picking up a LA neighborhood T-Shirt design, then off to the Edendale in Silver Lake, a stroll by the LA river, close it out by watching the sunset from the Griffith Observatory. If they can hike, we’re going all the way up Mt Hollywood for the view of the city.

Tue – Time for Malibu, 1st some hiking in Malibu Creek State park, checking out the rock pool, cruising around the canyons, then over to Point Dume to chill by the Ocean, cruising down the 1 Highway with sightseeing stops over to Santa Monica, Caribbean food from Cha Cha Chicken taken to go, going over to Venice Pier to watch the sunset. Seeing how car and house lights light up Malibu and the 1 Highway next to the ocean, at the same time watching the non-stop line of airplane lights landing at LAX. It’s a very peaceful place to watch the busyness of the world.

Wed – Time for DTLA, starting off at the Observation Deck at City Hall, a lot of ppl don’t know about it, it’s free and you get a great view of the city, then off to the last Bookstore, after that time to catch a show ideally at the Theatre at The Ace Hotel, a lot of folks don’t know LA has a lot of really great venues with a 1920s old school feel and close it out w some drinks at the Upstairs At Ace Hotel bar.

Thu & Fri – Mini road trip driving out to Joshua Tree. Thursday checking out Joshua Tree, various hikes & soaking in the desert vibe. The next day going over to Salton Sea to see the art works, the vibe, just not the smell, then to Slab City (an off-the-grid community) to see Salvation Mountain and then to the best part, Anza-Borrego Desert State Park. To see the sculptures in the middle of the desert. There’s great metal sculptures of dragons, dinosaurs and people in the middle of the desert. A very unique Stephen King styled vibe. Then back to town.

Sat – Starts off in Little Tokyo w food at Marugame Monzo. You can watch the chefs prepare Udon noodles which is really cool. Next stop over the hill to a backyard comedy show, which became a thing over the pandemic, ideally “Kids In The Yard”, after that time for some live jazz at the Baked Potato (since it’s my fantasy itinerary Stanley Clarke is playing).

Sun – Quick stop Hollywood Guitar Center the Van Halen Mural and checking out famous guitars on display. Then head down to Long Beach for some seafood and afterward chilling out in Palos Verdes parks by the Ocean. On the way back checking if The New Beverly is playing anything good? Since it’s owned by Tarantino, would be a fun experience to take em to see an old 80s action movie like “The Terminator” or “Predator” in a Tarantino owned cinema. 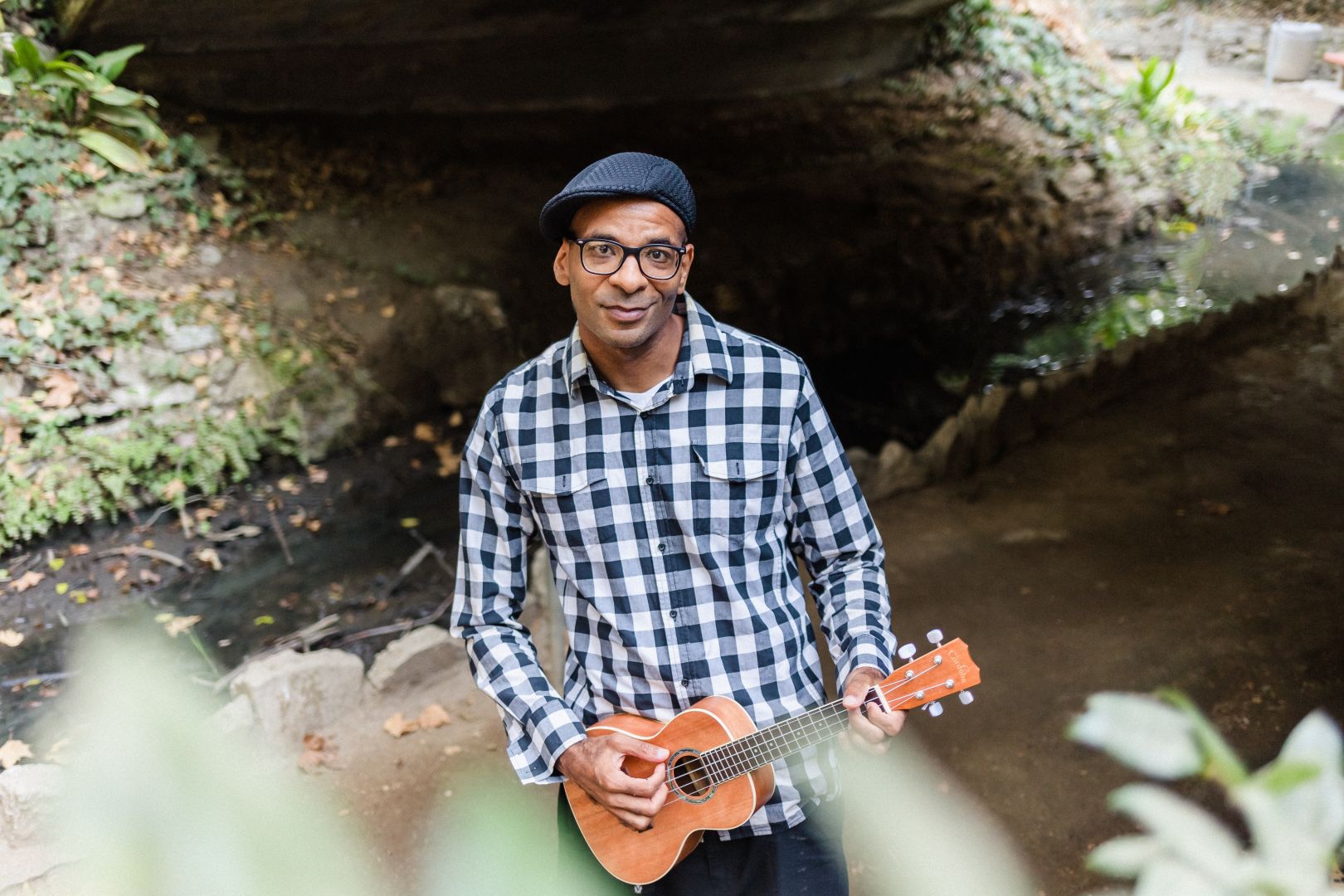 Shoutout is all about shouting out others who you feel deserve additional recognition and exposure. Who would you like to shoutout?
Yes, it’s more of a moment. When I was a kid, many moons ago when MTV used to play music videos.

There was an interview with U2’s old manager Paul McGuinness, who described when you’re starting out you can hustle the guitars, amps, gear, gigs etc. All it takes is one person, a lot of energy and a telephone book or smartphone these days.

That piece of information blew my mind as a kid. Bearing in mind U2 plays huge stadiums and that was their ethic in the beginning. I think that’s a very inspiring spirit to have no matter what’s going on. It’s possible to hustle a lot with your wits and simple means. So shoutout to Paul McGuinness for being an inadvertent inspiration. 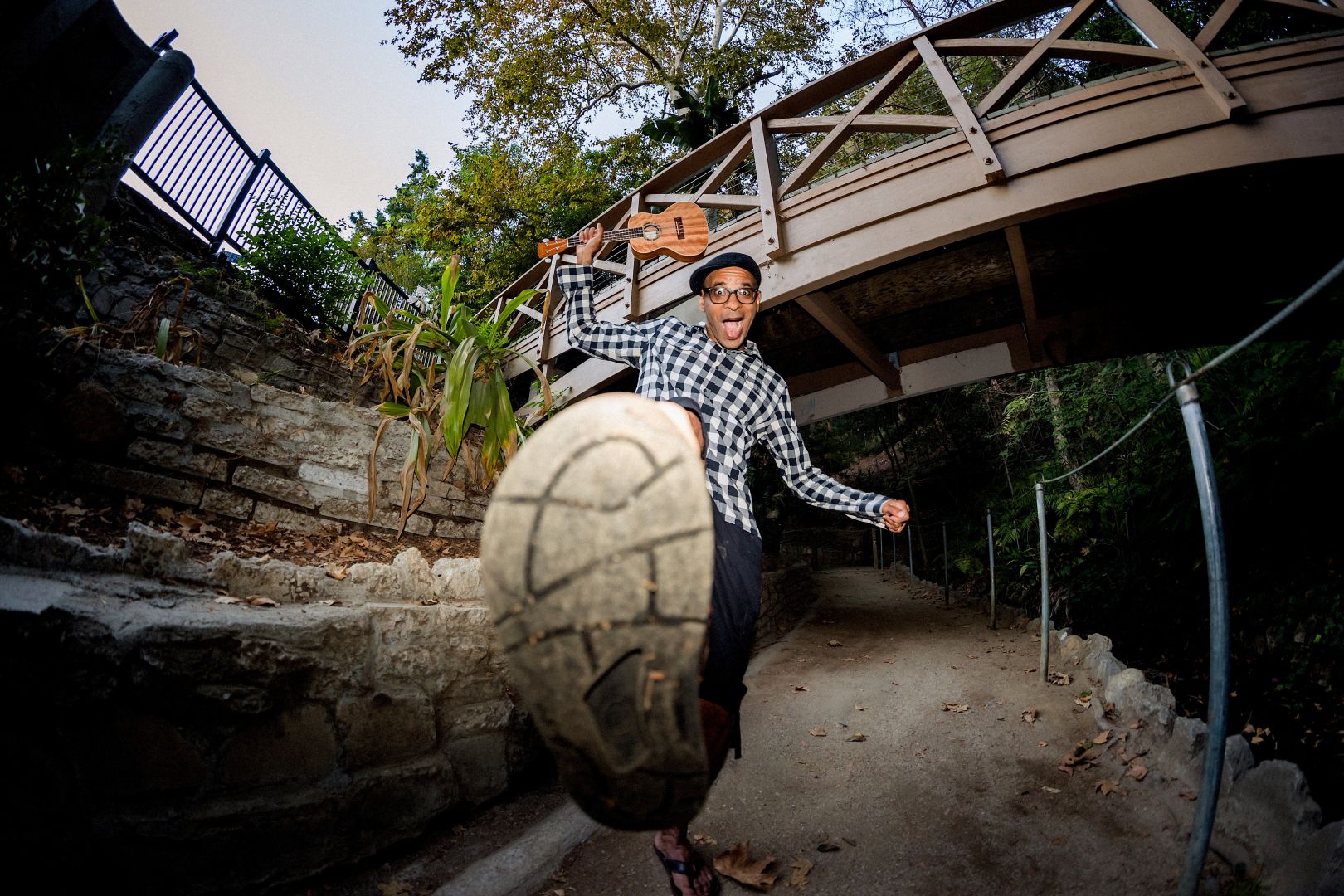