We had the good fortune of connecting with Scot Rubin and we’ve shared our conversation below.

Hi Scot, what role has risk played in your life or career?
Everything I have accomplished came as the result of a calculated risk, for an idea I really believed in. I left college and a job to become a “creator” of content about video games. The year was 1996. The modem was 56k. There were no influencer agents or platforms to go viral. I taught myself how to make web pages and learned everything I could about streaming audio.  I spent my days “blogging” and “live streaming” interviews with game developers and gamers around the world, while a live chat room contributed to the conversation. That was a big RISK!

The website All Games Network (www.allgames.com) became a hit. Within 1 year, I had visitors from 100 countries around the world and a sponsorship deal with a 3D graphic card manufacturer. 2 years later I sold All Games Network to Pseudo Programs (www.pseudo.com) to build the ultimate internet TV network. RISK REWARDED!

A few years later I was recruited by the President of Walt Disney Television. He wanted me to leave NYC and move to Hollywood to create the first television network dedicated to video games. To do it, we would need to raise $150 million from cable operators. There were no guarantees, I would have to risk everything I built online to take advantage of the opportunity. RISK!

It took nearly one year to build the right team and put all the pieces together. In 2002 we launched G4tv for Gamers. It was the thrill of a lifetime to talk about games on TV Network we built from scratch. RISK REWARDED!

In 2014 I was inspired to build a new business that would combine science, entertainment and the culinary arts.
Spending $150k on a liquid nitrogen ice cream truck from the future? RISK!

NITROPOD was born during the rise of molecular gastronomy. I began creating gourmet frozen desserts using liquid nitrogen. 7 years later, we have served hundreds of thousands of scoops at events in LA, SF, LV and NYC. We freeze exotic custom flavors for alcohol and wine labels. We package vegan and organic flavors for wholesale and retail, and drive a 30′ ice cream truck from the future. We do it all to serve the smoothest, creamiest, best tasting ice cream and sorbet in the world. RISK REWARDED! 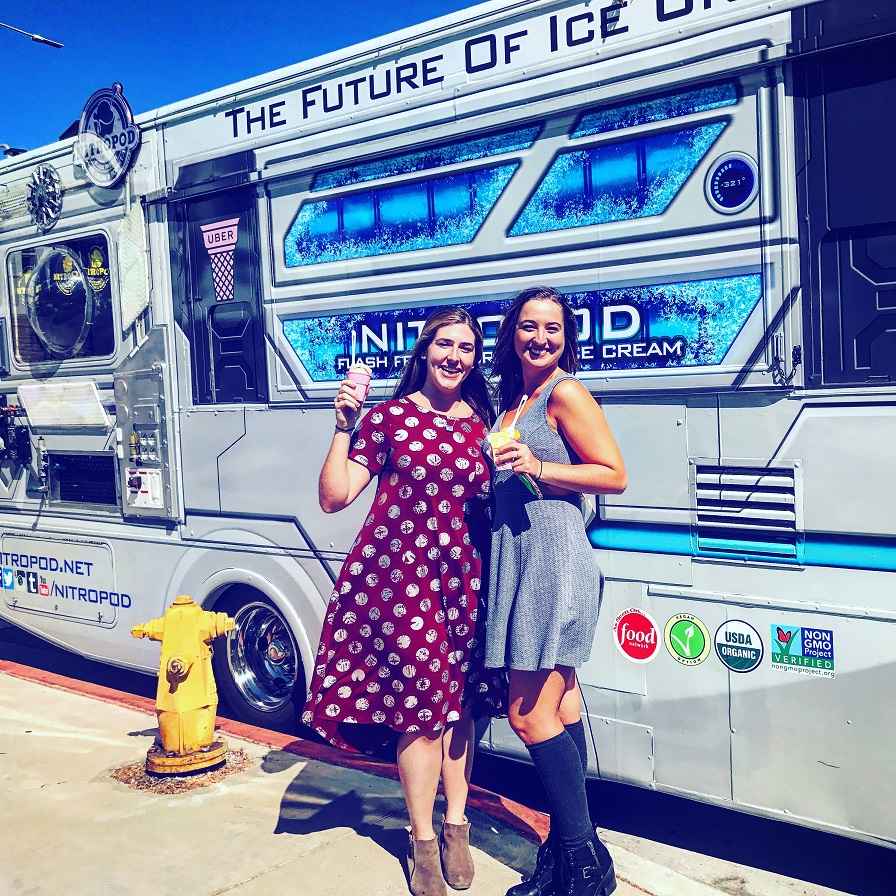 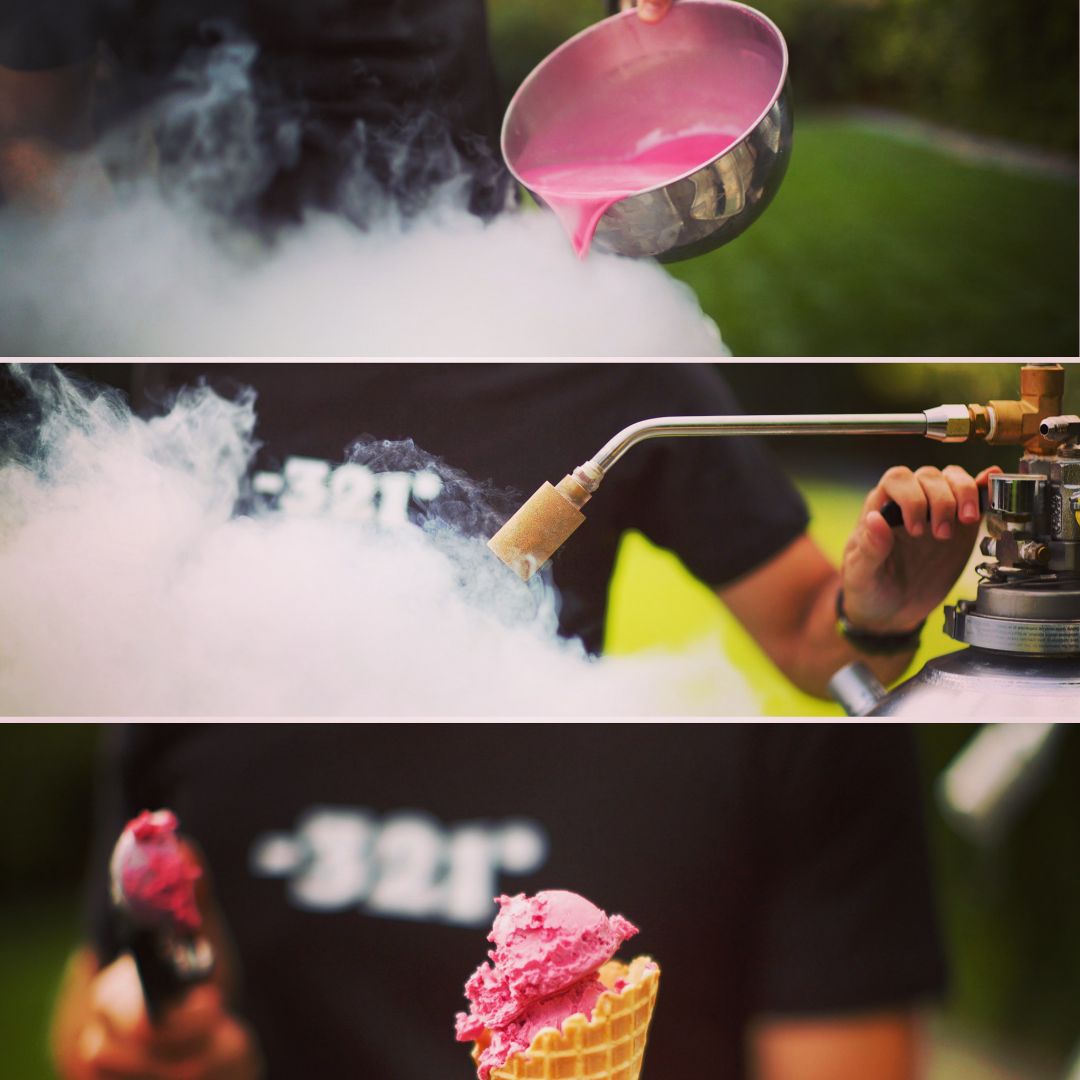 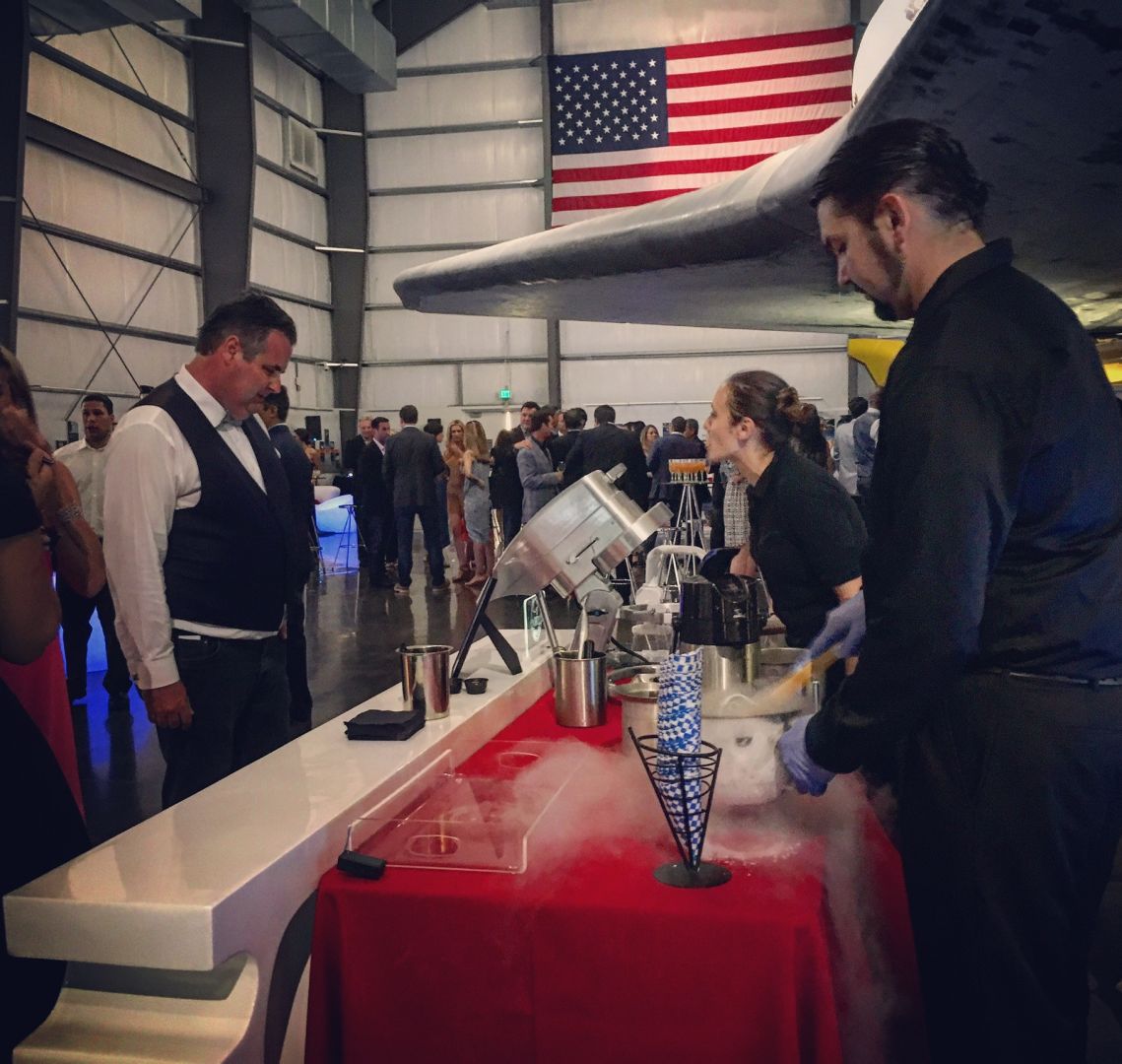 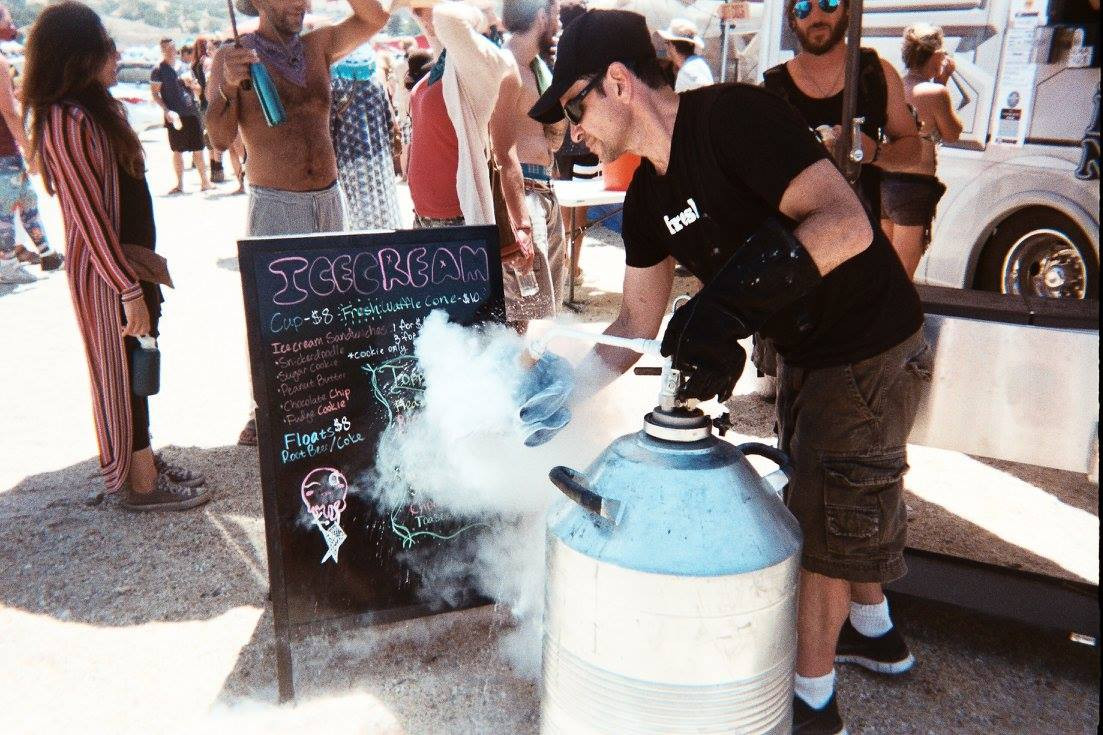 Can you give our readers an introduction to your business? Maybe you can share a bit about what you do and what sets you apart from others?
When people try our ice cream, many tell us it’s the best they have ever had. Wherever we go, ice cream aficionados will take the time to tell us just how special our ice cream and sorbet is. Our process is different from every product currently sold in stores. The liquid nitrogen freezing process uses science to create frozen desserts instantly. The flash freezing creates microscopic ice crystals resulting in the smoothest and creamiest ice cream and sorbet on the planet.
Our process also eliminates the industry standard of selling containers filled with 1/3 air. Since we don’t have to churn it, the product is dense and our scoops have more volume and explosive flavor per scoop.
We make a variety of creamy vegan “ice cream” flavors using fresh fruit, avocados, oat milk, pea protein and coconut cream. Our dairy and coconut cream is organic and most ingredients are locally sourced.
We are able to craft custom flavors for beer, wine and spirits for product launches and promotions.
We craft it all in small batches right here in Los Angeles, California.
NO GMO’s, NO Stabilizers, NO preservatives.

If you had a friend visiting you, what are some of the local spots you’d want to take them around to?
LA is huge and offers a lot of different types of experiences. I would make sure they had a chance to see a concert at the Hollywood Bowl. We would definitely catch an event at the new SoFi stadium. Rams, Chargers, Concerts are all scheduled for the Fall. Sports fans have so many options, NFL, MLB, NHL, MLS and the NCAA. Maybe they could rent scooters or bikes to cruise Santa Monica and Venice beach for some sun, surf, exercise and people watching.
There are so many restaurants to choose from but I would have to take them to Katsu-ya for some baked crab rolls and crispy rice with spicy tuna.
The beauty of LA is that we’re close to the ocean and the mountains. We would probably book a few days of skiiing or snowboarding at Big Bear or camping at Lake Arrowhead. 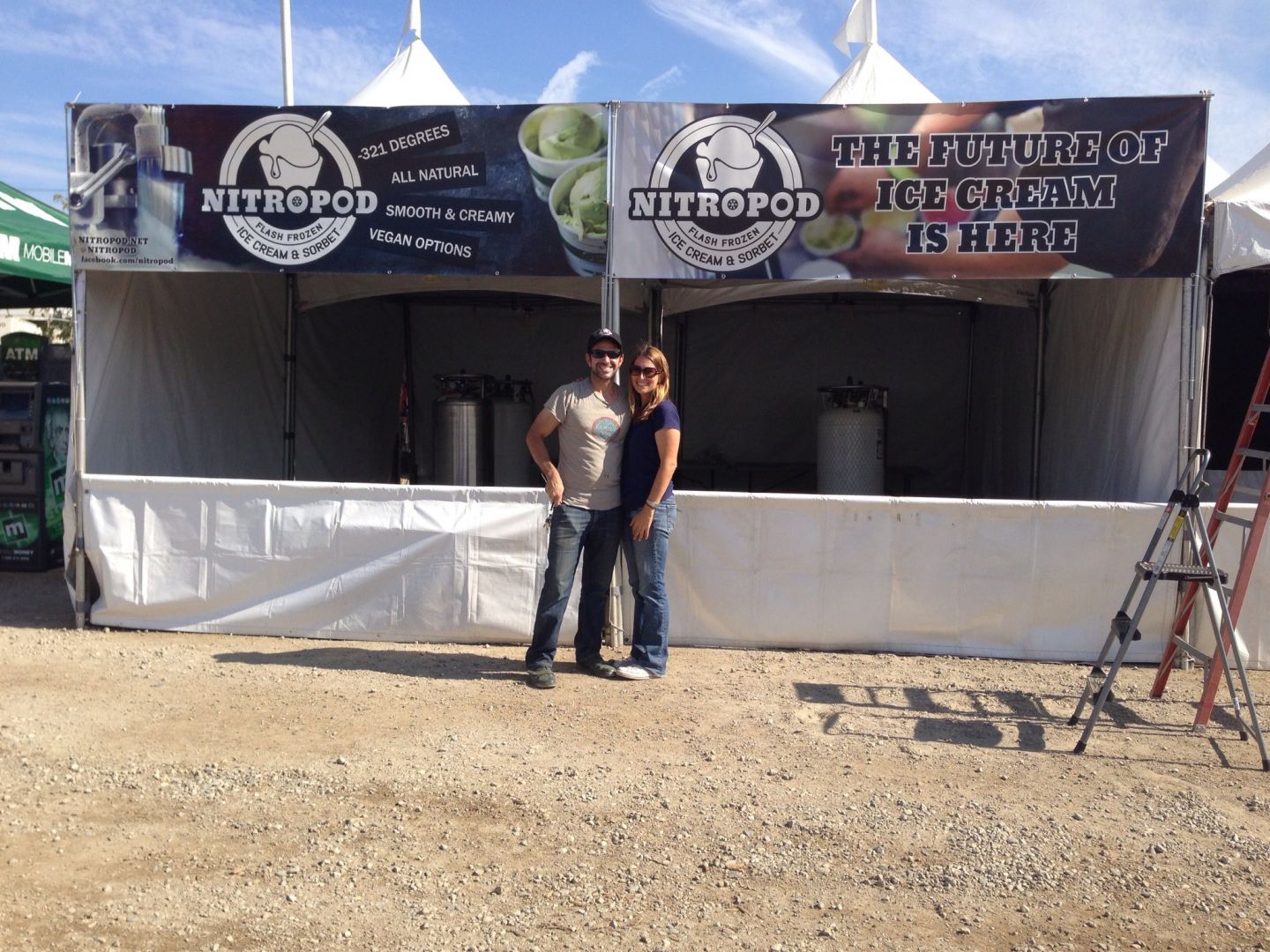 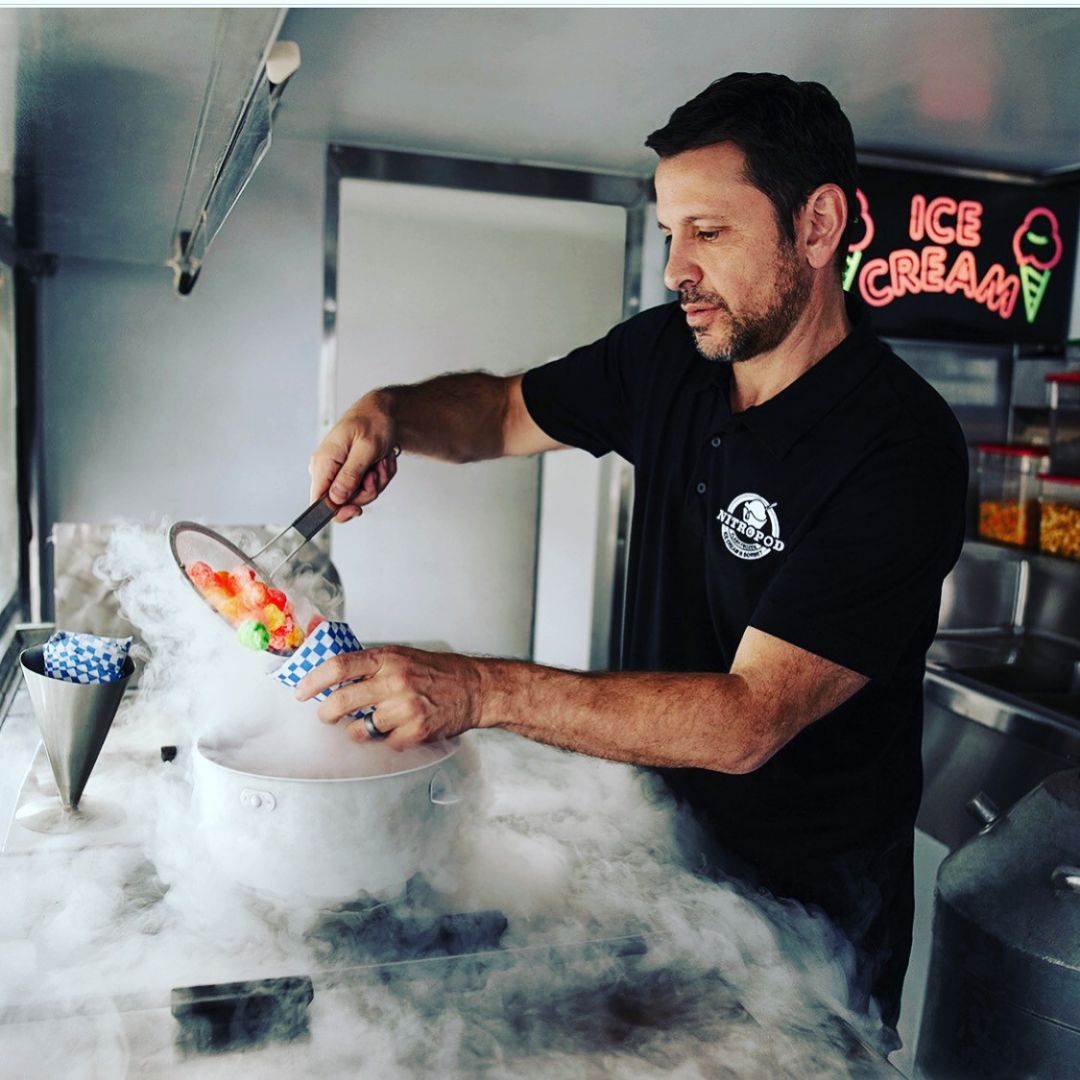 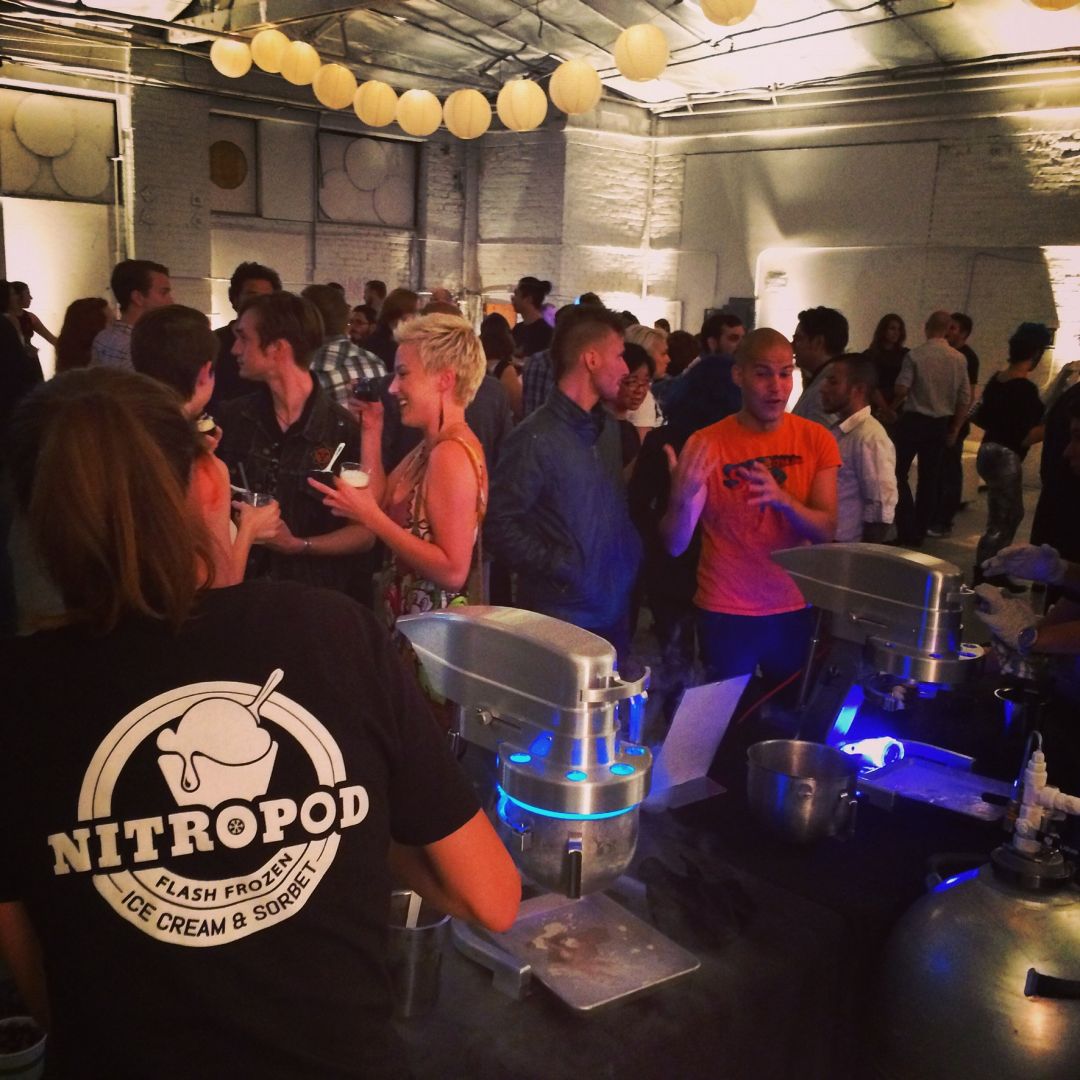 The Shoutout series is all about recognizing that our success and where we are in life is at least somewhat thanks to the efforts, support, mentorship, love and encouragement of others. So is there someone that you want to dedicate your shoutout to?
At every stage of this journey there have been people who have helped. Sierra Canyon School and Camp have been selling Nitropod for years. AusSam Candy in Granada Hills has our most popular flavors and exclusive candy infused flavors. Rob Kennedy, the inventor of the Nitrocream mixer we use to freeze at events was a big inspiration. In the beginning, my wife Stephanie booked events, zested limes, and froze ice cream. Our biggest wholesaleThe SBA mentor program connected me with Randy Lash who was instrumental in putting together the initial projections for the business plan. Chef Friedler created some of the original recipes. Jason Cowles taught me so much about liquid nitrogen safety and handling. Nitropod investor and childhood friend Eric Kagan was able to talk me through some common challenges facing entrepreneurs. Having those trusted, seasoned advisors to help work through the challenges is a big help. Investors Reed and Niket were able to help with financing and strategy on branding and marketing. Having a great Accountant like Aaron Levy at Citrin Cooperman has been critical at tax time and whenever the rules change. The start-up team of Bobby Ramirez, Chef Kate, Shea, Justin, Meredith, Maya, Mike, Walnette, Lauren, Luke, Caroline, Josh and Jubilee and and countless others have helped make ice cream and serve tens of thousands of scoops.

Finally, the clients that hire us and spread the word via referrals have been the biggest reason for our success. We can’t thank them enough.

Meet The CheeseBergens: A punk rock family band from Burbank