We had the good fortune of connecting with The New York Dose – Adalisse & Derick and we’ve shared our conversation below.

Hi The New York Dose -, every day, we about how much execution matters, but we think ideas matter as well. How did you come up with the idea for your business?
The New York Dose is a brand born out of fire and ashes & because of this, we often (privately) refer to ourselves as the Phoenix. The idea for our brand is. a two-part story that I’ll keep brief. The first part of it, is that originally, we were part of another podcast that started in 2016 called The Bodega Podcast and I, DJ, was also a co-creator of that show along with someone else. We were completely funded and financially, everything was great. Our equipment was paid for, our space was paid for etc… however, as the team began to grow & time moved on, my co-creator of that show/our investor found themselves in a personal, dark space and the energy of that began to spill out into the atmosphere of the show. There were four of us that held officer positions at that time and three of us got together after one final incident caused by my old co-creator and we decided enough was enough. As he had hacked into our digital platforms, that week became a battle where we ultimately decided to no longer work with them. Yes we were going to lose the audience we had spent months building, as well as the financial security however, it wasn’t worth the negative energy that now surrounded the space and the show.

Thus (part two), Adaloso, Bruckner & myself had an emergency rebranding meeting. In three days time, we had come up with a name, logo and concept for a new podcast show. With Bruckner being a DJ, Adaloso being a Dancer, & myself being an Actor/Poet… we were no strangers to the creative arts. At the time, many people we knew were reaching new heights in their careers but were being looked at as “overnight” stars but we knew how much work was being put in before they got to their success. We realized that we wanted to give people who were ascending in their careers, a platform where they could discuss that journey in real time & inspire any others that might be on a similar ascension. We wanted to highlight the unsung artists, entrepreneurs & everyday people of our city.

A piece of our mission statement from 2017 says “We aim to provide a reputable platform to anyone deserving of it and we hope to deliver a genuine New York City experience that people in and out of town can relate to. We want to serve our city the best way we know how: through entertainment, storytelling & conversation” & we have truly stuck to this ever since. 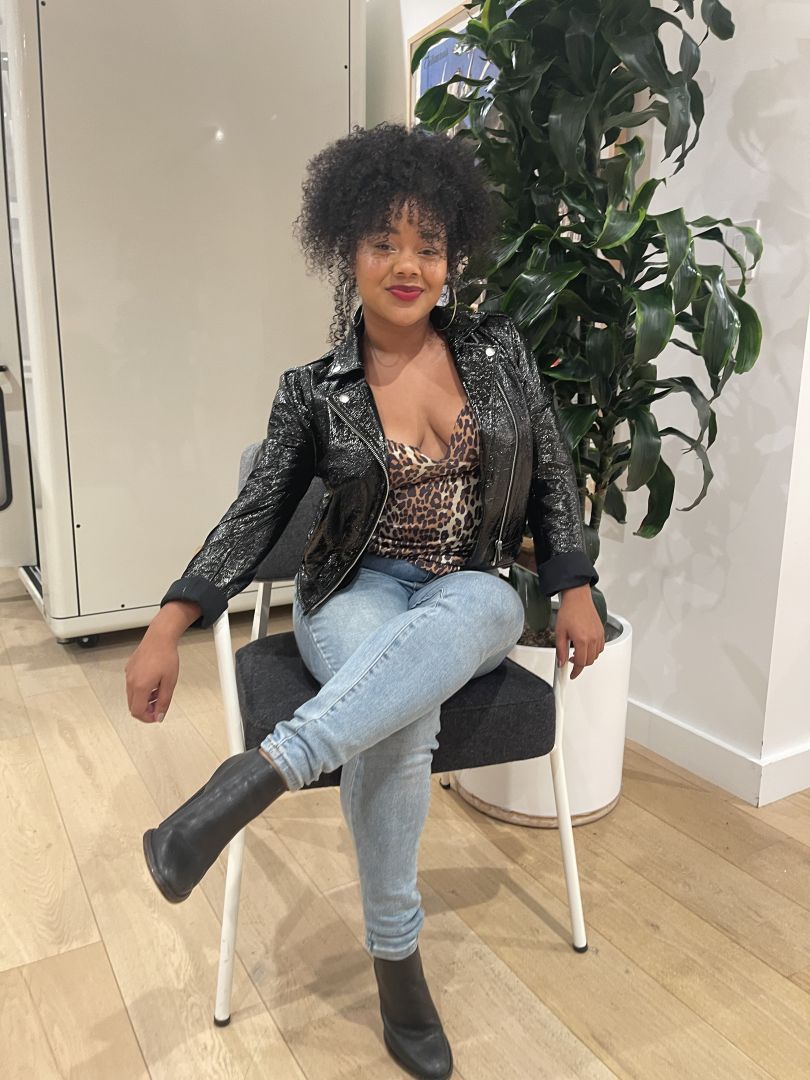 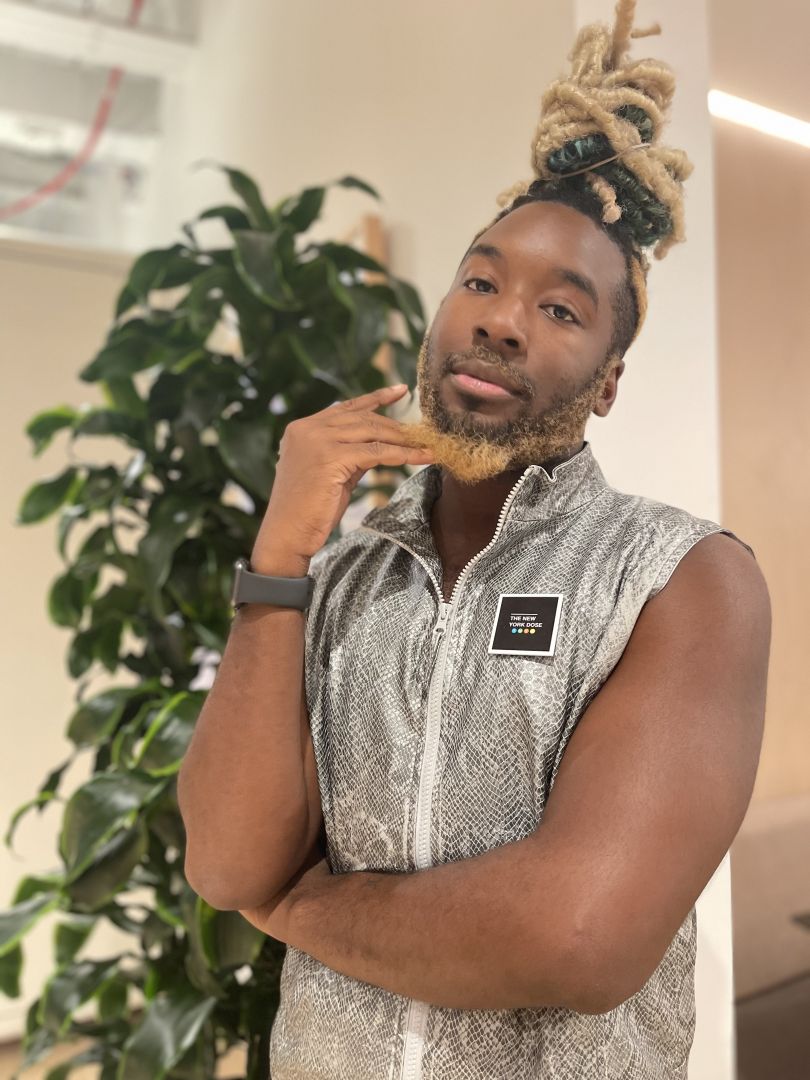 Alright, so let’s move onto what keeps you busy professionally?
When it comes to podcasting, we are most proud of two things: 1, the countless connections we’ve set the stage for. During one of our seasons we were always joined by two guests within the same field who were stranger to one another and it was always so beautiful to witness that by the end of the episode, they would exchange information and connect. Our favorite example of this was an episode where we were discussing the joys and tribulations of Millennial Marriages. We had two couples, four guests total and it was a beautiful episode filled with insight toward love and discovery and what it means to be newly-wed in todays world for a millennial.

2, We are also proud of our structure and how within 5 seasons and 4 years, we’ve managed to change the theme and format of the show each season while still keeping the integrity and root of who we are in tact. We’ve revamped How we engage in conversation & Why we engage in conversation, each year and it’s exciting to see what we will come up with next. This is one of the many things that sets us apart from other podcasts. That and the fact that we’ve stretched beyond podcasting into many other mediums as well. You will not only catch us audibly, but you will see us visually on your screen as well as you might see us right next to you at an event, enjoying it or working it. Something that we’ve heard from fans that we’ve met in person is that exactly who we are on air is exactly who we are in person. There is no “on” switch and although we are performers, podcasting is not performative for us. It is the one medium where we take advantage of being our authentic self.

Which brings me to how we got to where we are today. We got here by remaining genuine and authentic and by always having great vibes. The caliber of our guests have grown through the years and we’ve interviewed what most would consider to be “high profile” guests however…. each one of our guests are treated in a high profile manner therefore there is nothing we ever need to switch up depending on who we’re in front of. We always move with spirit and always will.

We’ve learned SO many lessons along the way but the biggest one would be…don’t sacrifice good energy for any type of capitalist promises. If the vibe is not right, we’ll figure it out on our own and we have always moved that way when necessary.

What I want the world to know about our brand is simply that… we are here. Every room that we’re in, every experience we have on our show, everyone that hears the show… talks about how important the conversations are and how impactful it is. We just finished teaching our podcasting program at a global conference and the feedback from that was amazing, but not surprising. We are at the stage where we know exactly what we have to offer… it’s just about exposure at this point and I’ll conclude with how grateful we are to ShoutOuut LA for being apart of our journey and highlighting us on YOUR platform to help us. 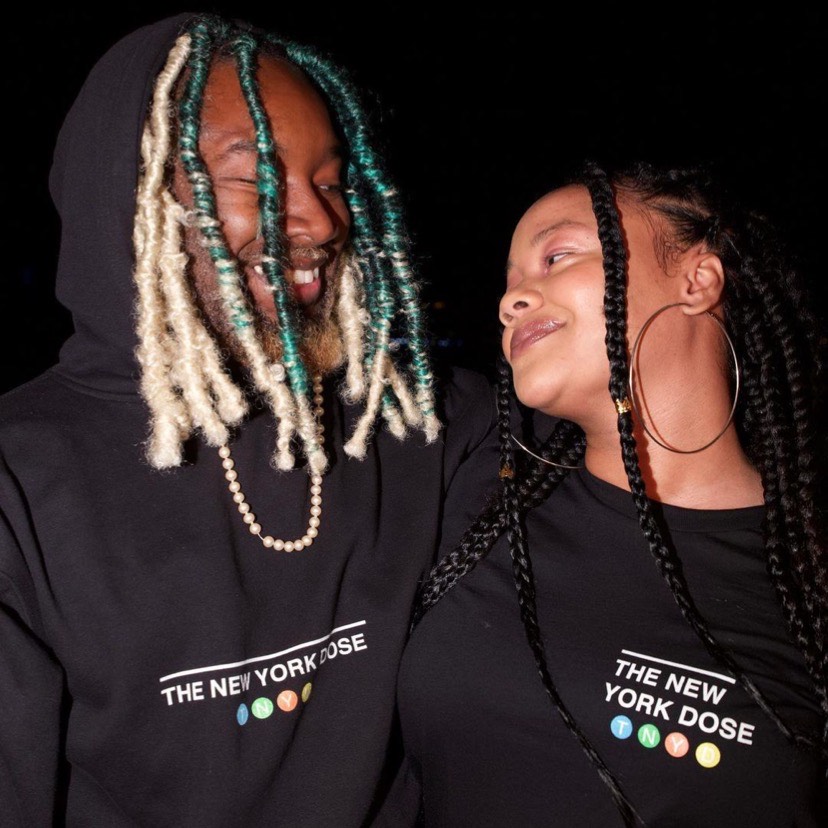 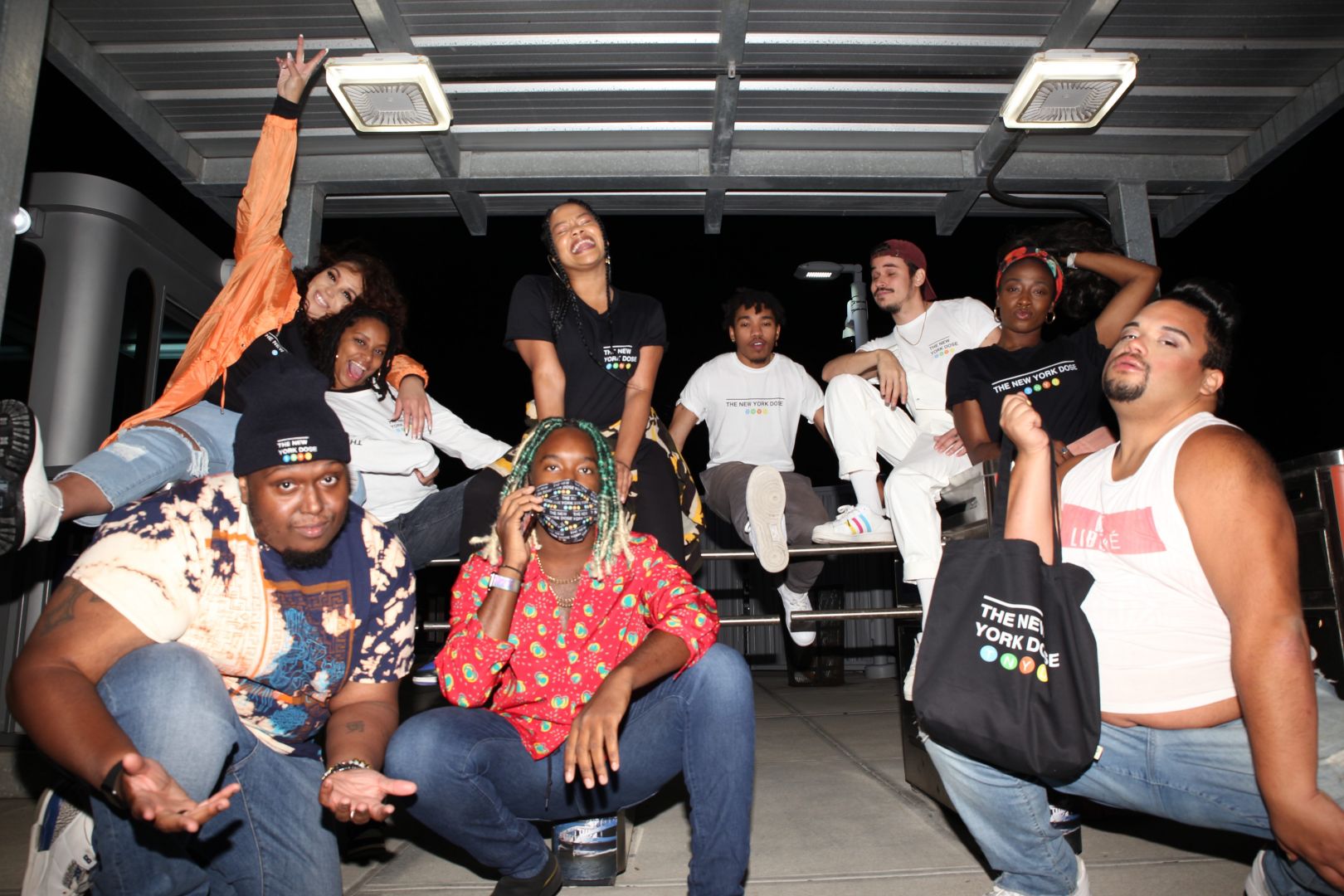 Any places to eat or things to do that you can share with our readers? If they have a friend visiting town, what are some spots they could take them to?
So… whenever people come to visit The New York Dose, we always begin by showing them our studio space in the Brooklyn Navy Yard because it’s absolutely stunning. The views are amazing, being by the water is great and the space just sparks creativity within you.

On a five day trip, this would be stop number one and there are plenty of local places to eat and drink in the area BUT… we would have to order a Pizza Pie from Wegmans right next door because it is some of the most delicious brick-oven pizza that we’ve ever had.

On day 2, Adaloso would have our guests meet up with us in the LES (Lower East Side) and we would head to Two Boots which is Adaloso’s favorite pizza chain. After eating there, we would head to Pianos nearby to eat and drink the night away.

On day 3, DJ would have our guests meet at the 59th street station where we would all catch the Air-Tram over the bridge to Roosevelt Island. This is a beautiful escape within the city and theres a wonderful thai restaurant that we would eat at.

On day 4, we would explore Central Park and all it has to offer and this would just be a precursor to coming hiking with Adaloso and I on day 5.
DJ has established a community of Black Indigenous Hikers of Color called ADON & we would take our guests out of the city, not too far, for A Dose of Nature (ADON). 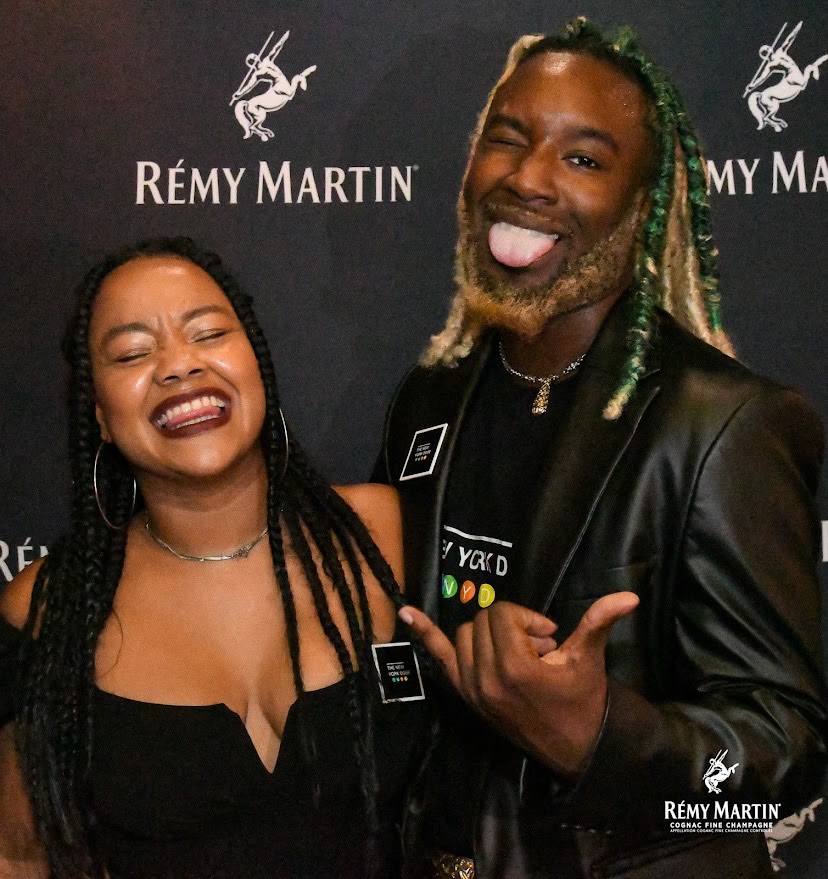 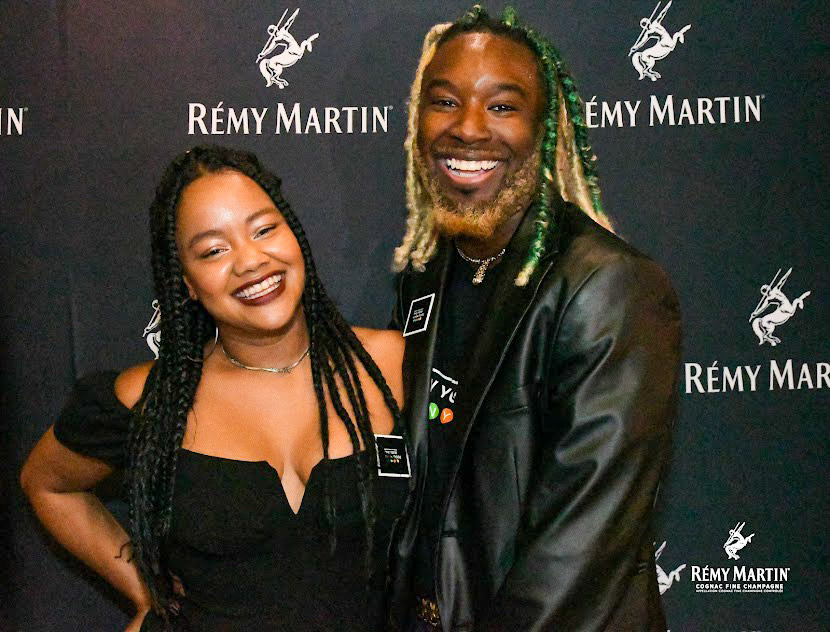 Shoutout is all about shouting out others who you feel deserve additional recognition and exposure. Who would you like to shoutout?
Oh dear… we have SO many to people to shoutout because we have such a wonderful community behind us BUT.. in a nutshell:

S/O to The Wind & Cloud Podcast: They have always believed in & supported us and @rhcomedy gave us our first event-based interview opportunity.

S/O to @Jewleesah of @LadiesWhoBronche: Many moons ago, she introduced us (& often let us record out of) the space/household name that we still use to produce our episodes today.

S/O to ALL of the listeners and supporters that have rocked with us thus far & last but not least,

S/O to the AMAZING team that has been behind us during our journey. There have been many iterations and we truly appreciate each and every person that has helped work on The New York Dose.