We had the good fortune of connecting with Chick Curtis and we’ve shared our conversation below.

Hi Chick, can you tell us more about your background and the role it’s played in shaping who you are today?
I was born in the District of Columbia at Walter Reed Army hospital at the tail end of World War two. Shortly after retiring his commission as a Captain, my father joined the Department of State and served as a personnel officer for the Agency For International Development for 30 years. My first 12 years were spent in Northern Virginia until my father was offered a post in Costa Rica where we lived for four years. It was the most important four years of my life. I learned a foreign language, had a motorcycle, learned to smoke cigarettes and had my first beer at a bar next to the Teatro Nacional where my mother did some acting on stage. I got roped into a couple of minor roles as well. Our house was a veritable art studio for my mother, a maturing oil and pastel portrait painter. She received commissions to paint many of the local residents and a few dignitaries including the wife of the sitting Costa Rican president. She even did a large portrait of me and my two brothers which was hard to sit still for but intrigued me none the less. After school we would come home and find mom working on an art project, most likely exploring a new artist or style. When she discovered Jackson Pollock she said “Here, take these brushes and drizzle in some color” on the canvas. In the evenings, we listened to Cuban/Latin jazz music and created a percussion section with everyone beating on hassocks, chairs, bongos and anything else we could pound on. My brother became a professional drummer. To round out the experience, my brothers and I devoured every Mad Magazine issue that ever came out and created our own cartoon characters. To this day I credit my art career success and fulfillment from these years because of the saturation of creativity in our family. 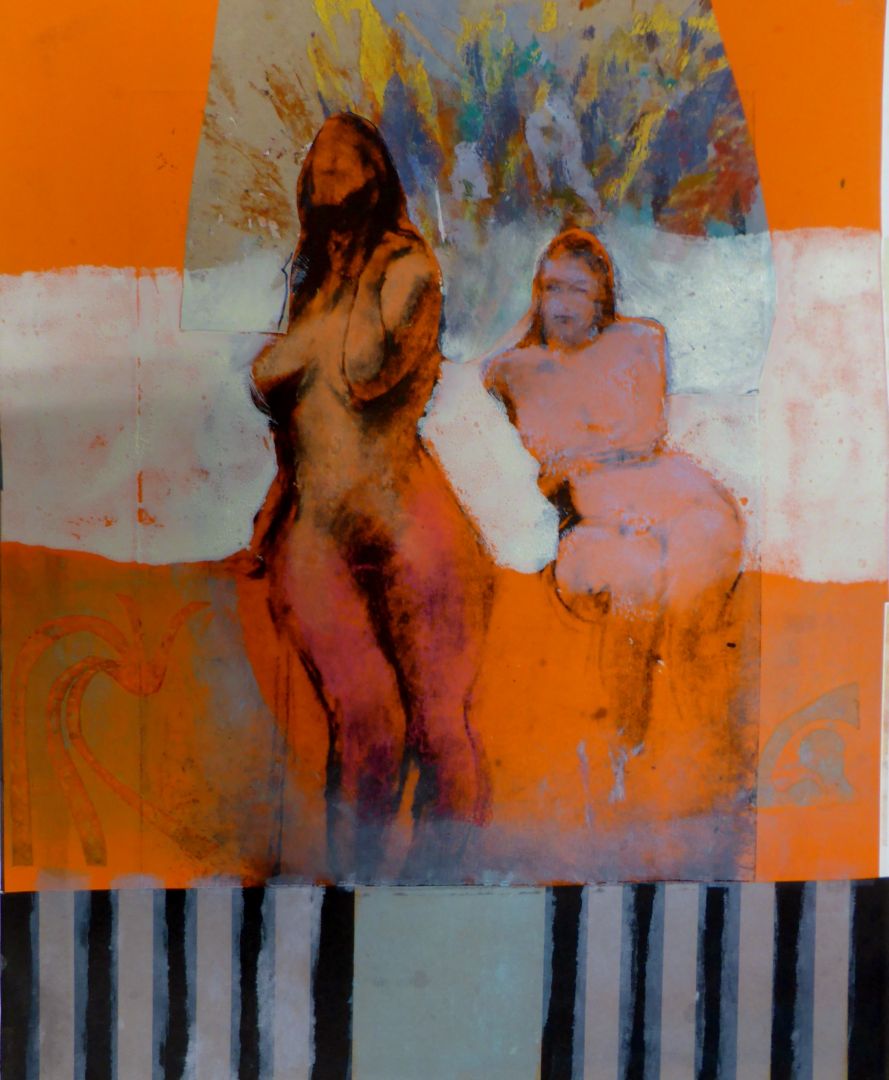 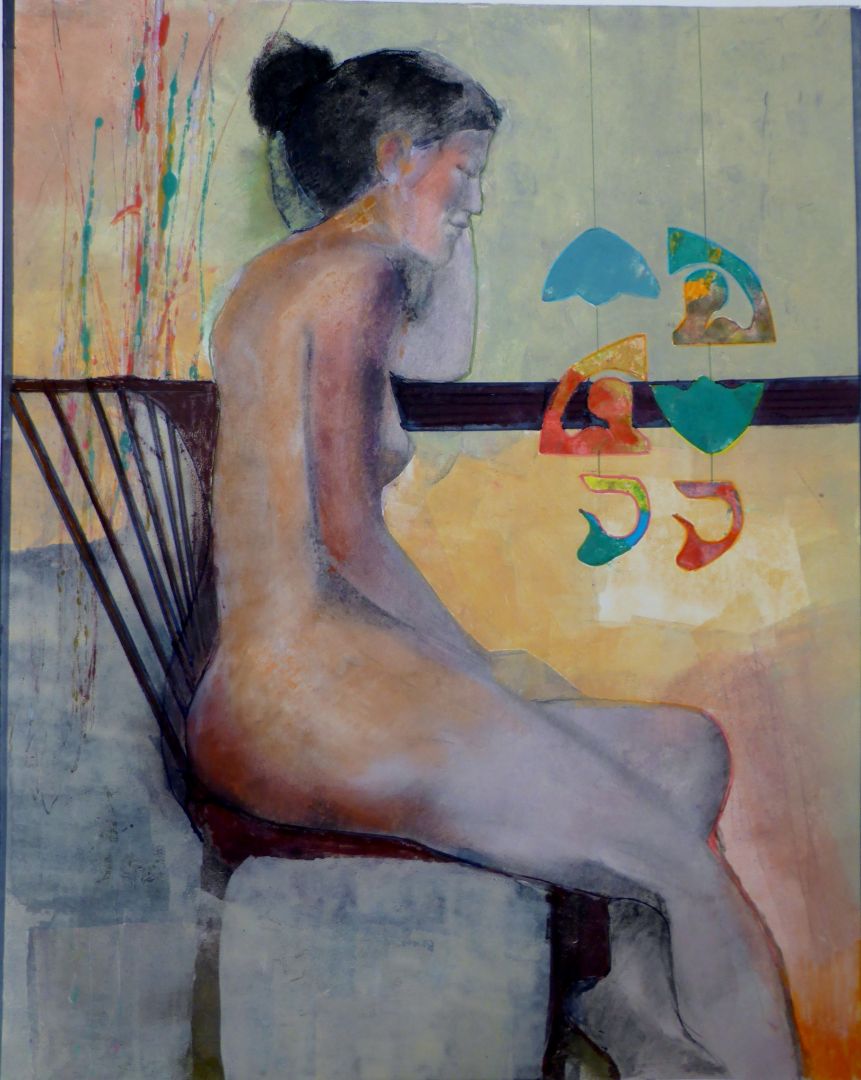 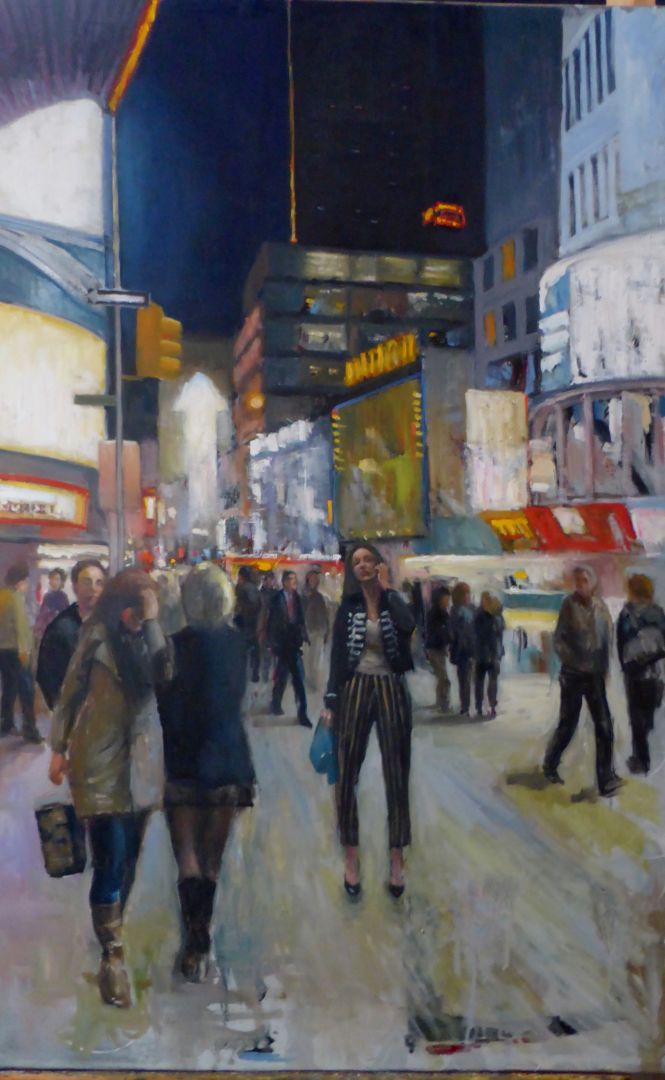 Alright, so let’s move onto what keeps you busy professionally?
I didn’t think I had much ability in drawing and painting at first. So I never pursued a career in art early on. I became a high school counselor and retired in 2006. Sandwiched in between my high school years and my counseling career were many indications that I loved art. I did sign painting, calligraphy, wood working, cartooning, and model railroad building to name a few. Model railroading? That doesn’t come to mind to most people when they think about art. I hand painted all the scenery backdrops on my layouts. It was very distinctive. In 1989 my layout was selected to be on a tour of the National Model Railroad Association convention mainly for that reason. So I didn’t really start easel painting until 1994 when I saw my first Edgar Payne piece. I bought some oil paints and brushes and tried to copy it. I was disappointed, so I started taking art classes, going to workshops, museums, buying art books and magazines and painting every day. One of the aspects I love about art making is crossing disciplines. I hold life drawing sessions in my studio and have collected hundreds of sketches. I take some of these drawings and add them to my printmaking compositions. That’s not original, but I have developed a style that is very much my own. Conversely, I integrate some of the methods and approaches from printmaking into my painting. The best thing that happened to me was realizing that the idea of having talent isn’t as important as the amount of love I have for art, and that practice is the foundation for all learning, growth, and satisfaction. Someone once said my studio is part battleground, part playground. I’ve learned to balance out the casualties. 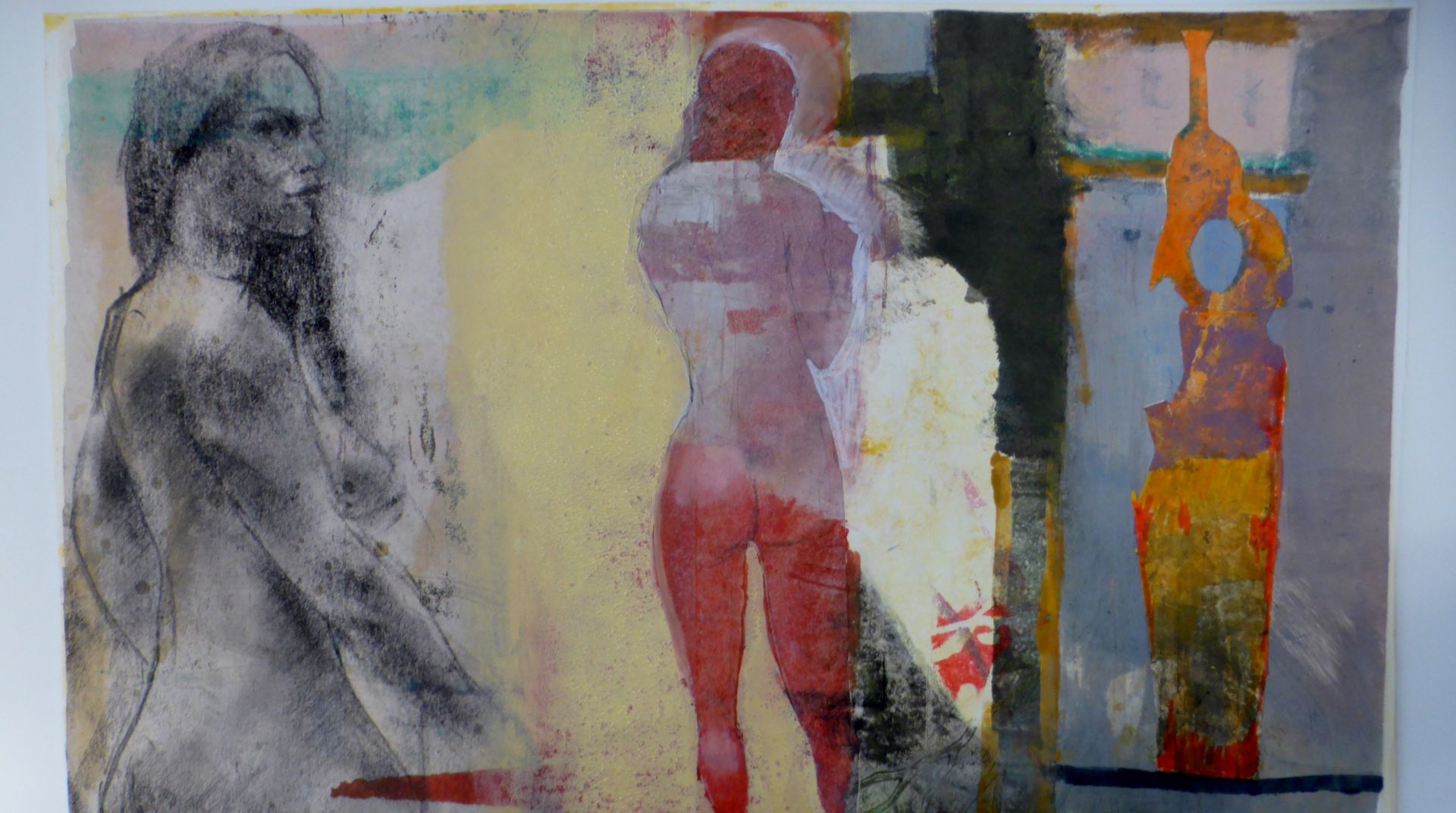 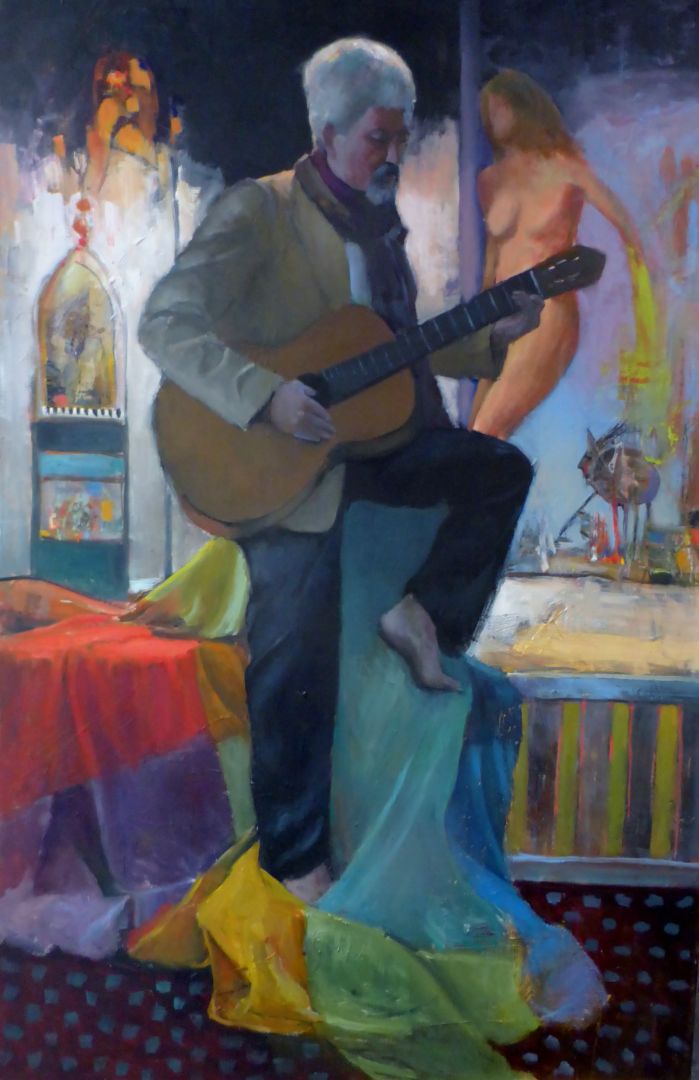 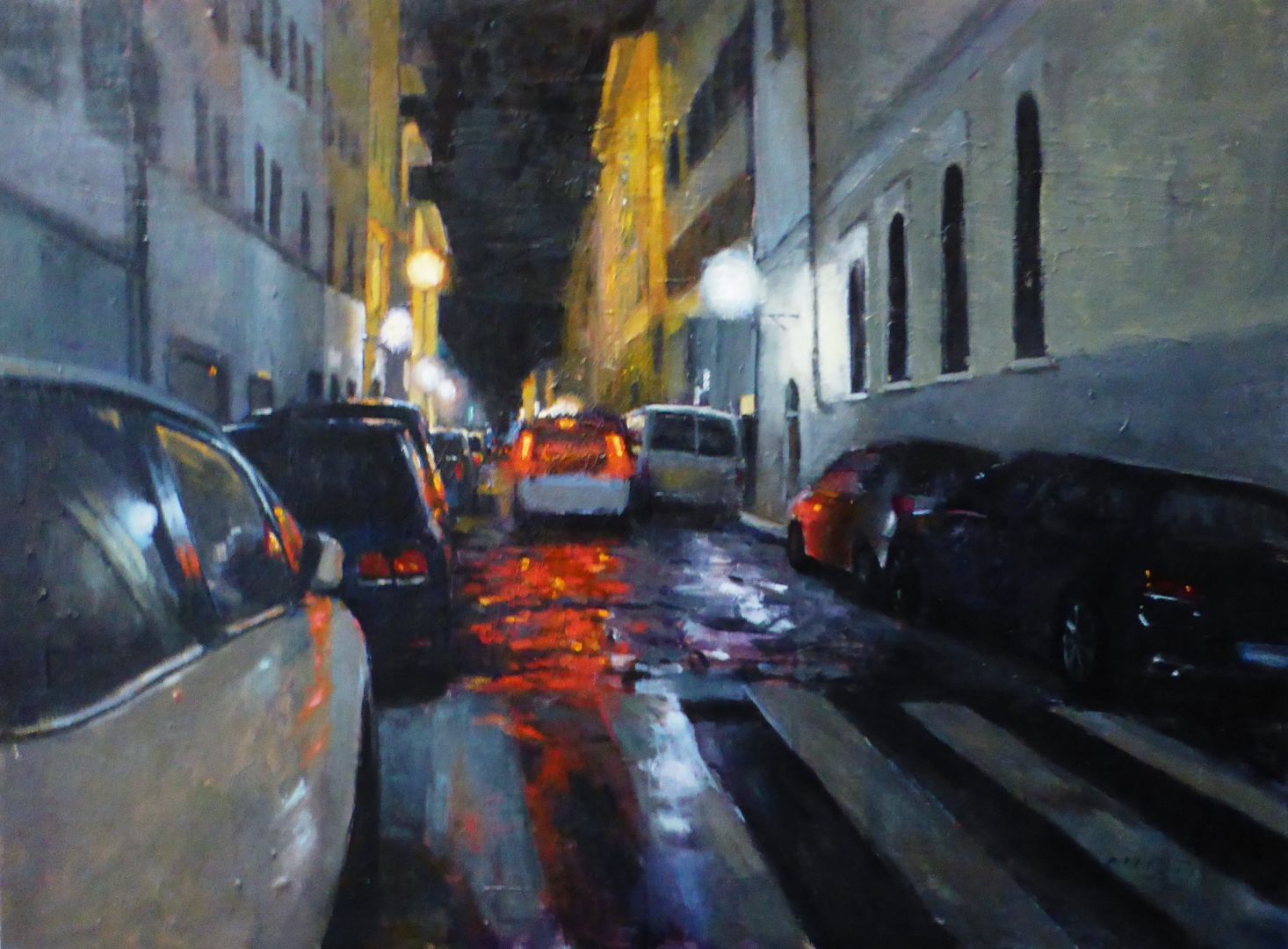 If you had a friend visiting you, what are some of the local spots you’d want to take them around to?
My friends would probably be old like me and would hate driving in a lot of traffic to go anywhere far. One particular trip we like to take is to Moro Bay. We rent a house near the beach with friends and spend the week birding, playing cards, going out to eat, cooking at home, playing guitar, reading and relaxing on the deck watching the sunset. 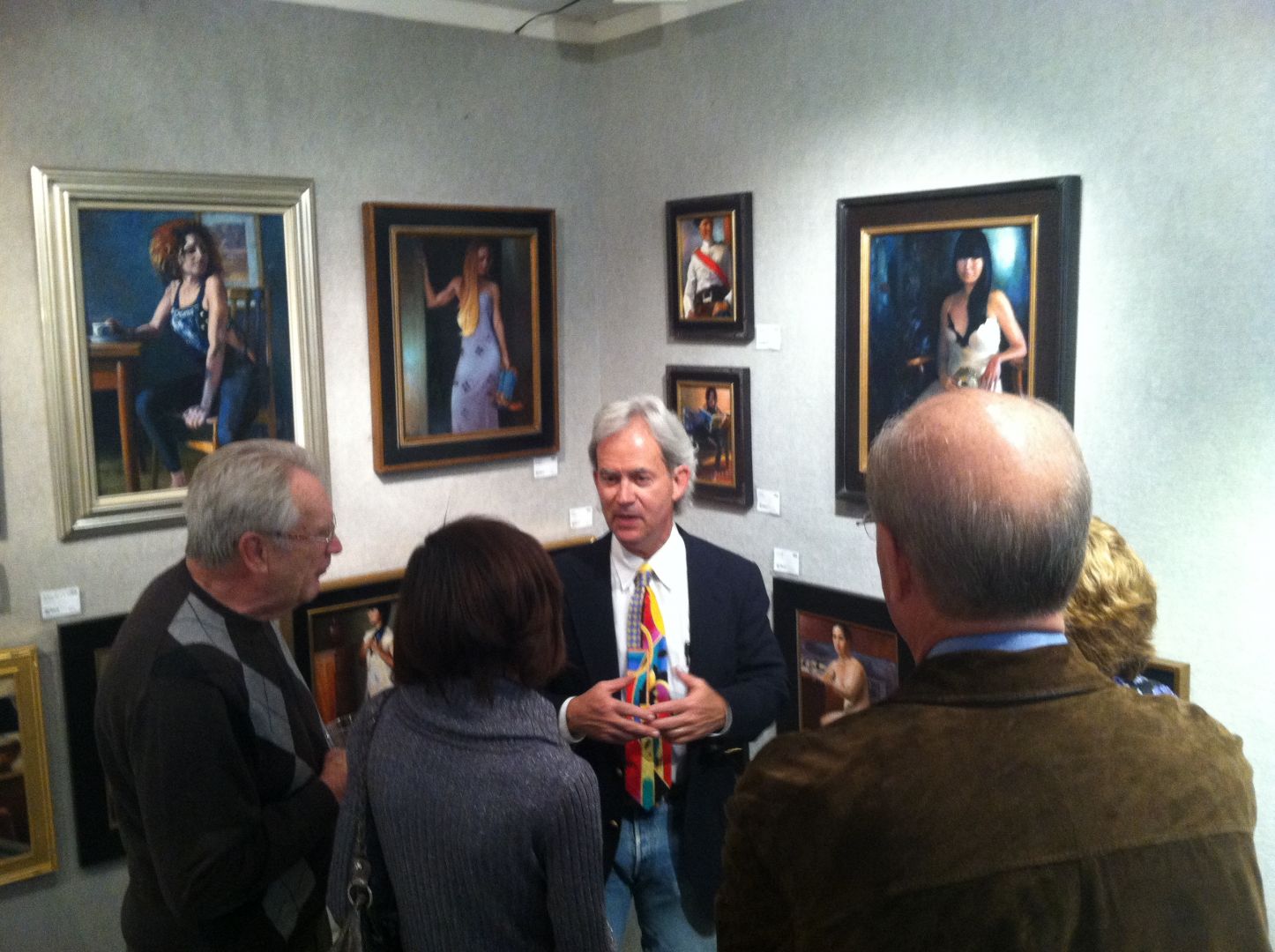 The Shoutout series is all about recognizing that our success and where we are in life is at least somewhat thanks to the efforts, support, mentorship, love and encouragement of others. So is there someone that you want to dedicate your shoutout to?
My brother Chris and my wife Nan deserve scads of credit. Both of them have relentlessly encouraged me to pursue and develop my art. I would also like to thank Mark Schooley who is the director of the Riverside Community Arts Association who offered me my first show in 2004. How could I omit my fantastic teachers and mentors? Joseph Todorovitch, Ron Pokrasso, Dayna Mason Gregg, Ken Auster, and Mac Brandon each inspired me in different ways. And of course, my parents. Mom was the one who got me hooked to begin with.

Image Credits
I took the photos. I don’t expect to be credited though.