We had the good fortune of connecting with Alani iLongwe and we’ve shared our conversation below.

Hi Alani, how do you define success?
This is a great question. I’ve learned to define success by asking myself three questions: 1) Is what I am doing personally/professionally in line with my goals? 2) Along the journey toward reaching my goal, am I consistently happy? 3) Is what I am doing in service to others in some way? I find it easiest to begin my measurement of success by first setting quantifiable goals. Once I’ve done that, I take the time to craft actionable steps toward completing those goals — year-by-year, month-by-month, day-by-day…brick-by-brick. Next, I strive to stay mindful of whether I am taking the time to enjoy the journey. This usually takes a series of honest conversations between myself and my support system (i.e. family, therapist, trusted mentors). If I learn that something I am doing isn’t consistently bringing me joy, then I mark it as a sign to adjust something in my process or cease the activity completely. While the latter is usually the most difficult choice, it allows me to carve an alternative path toward my goals that will offer a much more enjoyable experience. Finally, I want to make sure that whatever I am setting out to do is offering a positive service to my community and (in my case) students. I do this by focusing on causes that I am innately passionate about and questioning whether my services/activities are in line with those passions. For instance: Do the services I provide aid others in reaching their career goals? Am I offering resources that may better a student’s interpersonal relationships and mental health? Have I committed to services that aim to support BIPOC children and little girls in realizing they are capable of reaching their dreams? What about my family? Are my professional/personal activities keeping my wife and child safe and cared for? If I am able to say, “Yes” to all of these questions,then I can confidently say I am (by my definition) successful. 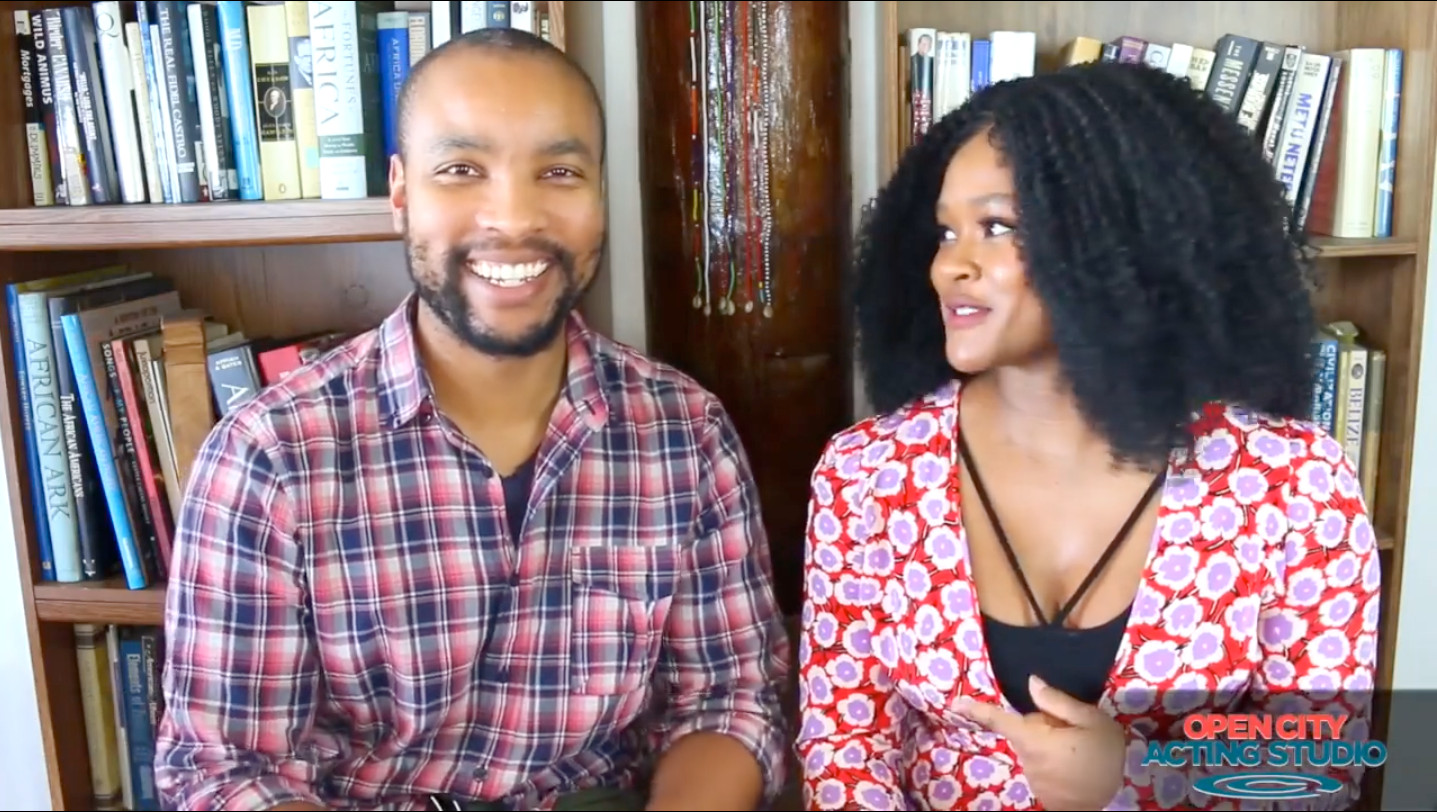 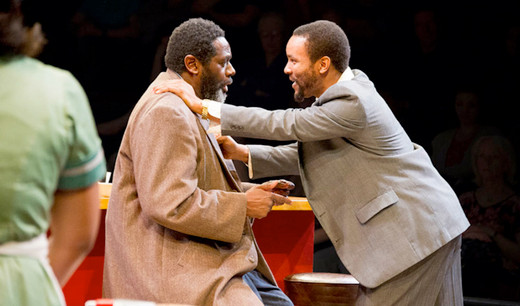 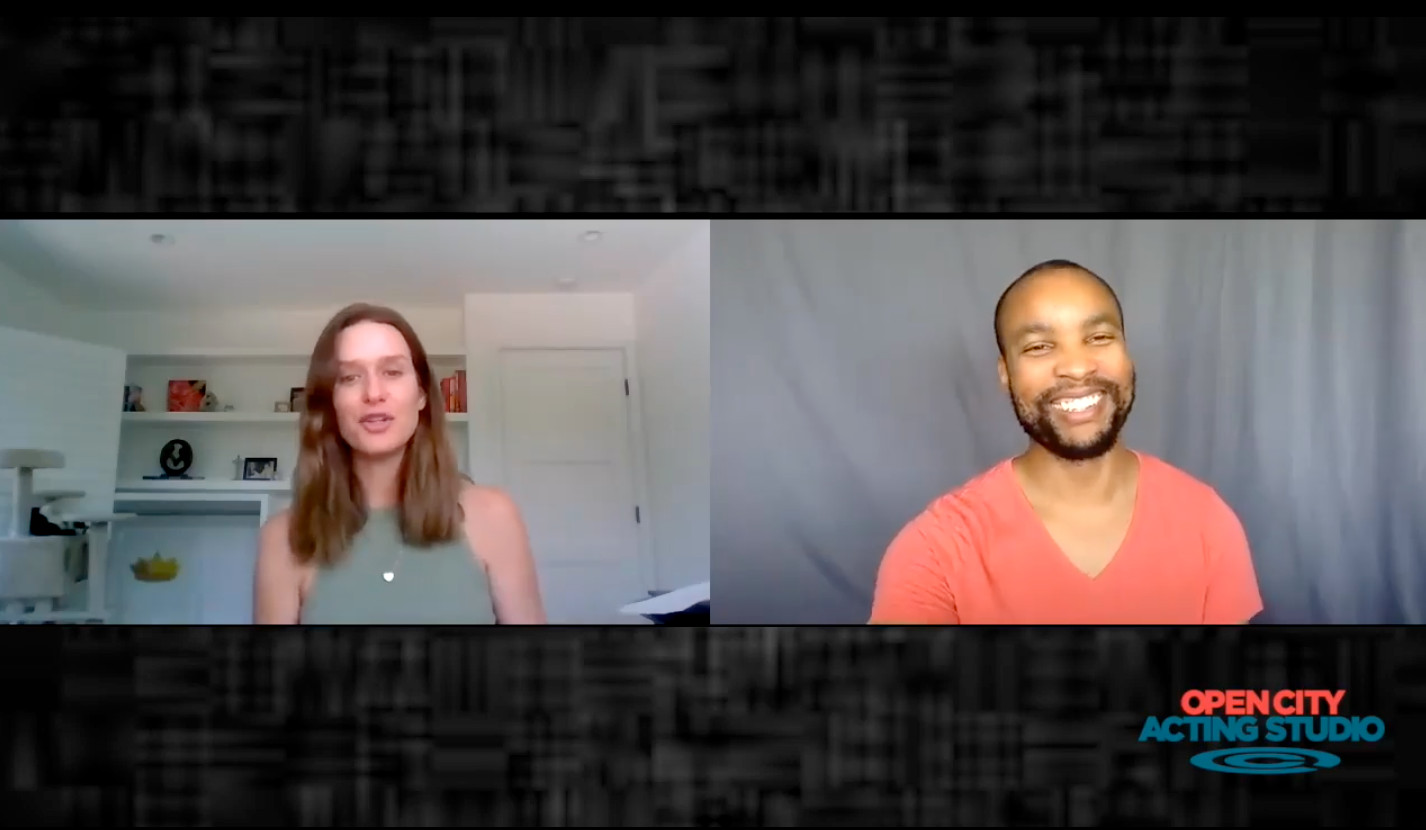 Alright, so let’s move onto what keeps you busy professionally?
I guess the story of my artistic journey starts with my name. Alani iLongwe. I was born Carlton Byrd Jr. “Carlton” (meaning ‘sower of seeds’ in some languages) was taken from my biological father who disowned me on the day of my birth. “Byrd” was given by the family who owned my ancestors as slaves. This is NOT meant to shock you. It is just to set the table with a few truths that give context for who I am. Alani iLongwe f/k/a Carlton Byrd…Jr. As a child growing up in Fort Myers, Florida, I had dreams of becoming an award winning professional actor. My favorite place to visit on weekends was our local video store where I could rent and watch the latest work of some of my favorite performers such as Charles S. Dutton, Angela Bassett, Denzel Washington, Laurence Fishburne, Whoopi Goldberg, and Forest Whitaker. While I watched the work of other actors, I was drawn to their work most of all because in their performances I saw myself. Not “Carlton Byrd”. But someone new. Someone I wouldn’t meet until years later. That is to say, in their performances and the stories they told, I saw the possibility for a life beyond the limitations of my imagination. My drive to exceed those limitations, would carry me to New York’s University’s Tisch School of the Arts where I would hone my craft as an actor, writer, and producer. My passion for storytelling would guide me from my training in New York to the entertainment capital of Los Angeles. Along the way, I would step into roles on such shows as Law & Order: SVU, Major Crimes, Castle, and Blue Bloods. I would even share the big screen with Academy Award Winners and Emmy Nominees while meeting some of my cinematic heroes face-to-face. Then came the Sony Pictures hack of 2014, where I learned how some studio executives viewed legends such as Denzel Washington and Kevin Hart. Faces and bodies like mine. Next, came the string of unarmed black men killed on film rocking the United States with a reminder of just how far we have to go until we truly become a “land of the free”. But it wasn’t until 2015 that I fully understood that I needed to make a career change. I was sitting at home with my then girlfriend, now wife, as she was preparing for a mentoring obligation designed to teach incarcerated young black men how to tell their stories through the power of writing. In preparation, she was tasked with watching a video detailing harmful images in the media which may have contributed to their incarceration. As I watched this video with my significant other, I looked on in horror as a role I played in a movie came on screen being labeled as a key example of a harmful black image. Deeply wounded, I wept. Between the tears, the roles that I had been taking up to that point suddenly came rushing through my mind along with the labels they shared in common — angry, black, thug. I was devastated. It was at that point that I began a five year journey dedicated to illuminating the human experience through innovative storytelling. During this time, I would direct and executive produce Chris Gabo’s MEAT PUPPET, a streamed theatrical production aimed at raising money for the philanthropic group, Unusual Suspects, which “mentors, educates, and enriches underserved youth.” Next, I would develop an immersive musical called AT THE RIVER I STAND based on the events surrounding the Memphis Sanitation Workers’ Strike of 1968 before co-founding Open City Acting Studio. Using these works as a foundation, I continued to develop, direct, and produce stories designed to steer BIPOC images in the media away from damaging caricatures and toward the complex beauty of our shared humanity. However, my transformation would not only occur professionally but personally. Enroute to marrying my best friend and fathering my first child, I would follow in the footsteps of my Pan-African father-in-law to trace my family history from the plantations of the Virginia Birds/Byrds to the shores of Mozambique. Stripping myself of names linked to trauma and bondage, I would take a new name, Alani iLongwe meaning Little Bird, Precious Child. With this name, I would finally meet the version of myself that I saw in the performances of my favorite actors as a child. Whether it is by developing VR digital content, directing streamed theatrical productions, or offering my consultation services to fellow artists looking to create a strategy to expand their skills from one artistic discipline to another, I am in service to those interested in creating the next generation of stories that will illuminate the human spirit. Now, every morning when I wake up, I am proud of the artist I’ve become. But what excites me most is the opportunity to mentor the next generation of creatives interested in carving their careers on their terms using their unique gifts.

If you had a friend visiting you, what are some of the local spots you’d want to take them around to?
A week huh?! Okay! First, fresh off the plane we have to rent an AirBnb out on Venice Beach. That way we enjoy the sand, scenery, and sunset. On the way, we’ll grab some groceries from Whole Foods — because I believe in cooking for people — and we’ll have some blueberry pancakes from scratch. Then, we’ll lounge on the beach before grabbing some lunch at Egg Slut. After all that fat and carbs, we’ll catch a pick up game on the hard courts “White Men Can’t Jump” style! For dinner, we’ll grab a fancy meal at Mastro’s! (Don’t worry! I’m treating!) Day two, we’ll head to Echo Mountain in Pasadena for a nice 10 mile hike (because, why not!). We’ll grab lunch at Mi Piace because it’s delicious. Do some light shopping while we’re in the area before heading to York for some Donut Friend! (You can’t go wrong with a coconut bacon and maple syrup drizzled donut!) We’ll stay local to grab a pie at Town Pizza before watching a movie at Highland Theater. Day three, we’ll do something touristy like go to the Price is Right before doing some shopping at the Grove. We’ll grab some lunch in the food court before heading Downtown to play some old school video games at Bar82. That night, we’ll catch a show at the Dorothy Chandler before having dinner at Preux and Proper. Then, we’re partying at Cherry Poppin’ Wednesdays in Hollywood. Day four, we’ll spend time with my family in Mount Washington so they can take in the sights of LA before going on a hike through the neighborhood. We’ll then head to Leimert Park to chill with ‘GG’ (Great Grandma) before heading over to Natraliart (over on Washington) to grab a plate (this entire trip is just eating by the way!). Day five-seven, I’m cheating and saying we’re renting a house in Silver Springs for a three day weekend. We’ll soak in the sun, lounge in the pool, and watch some old school movies just to get away until I have to drive them back to the airport! 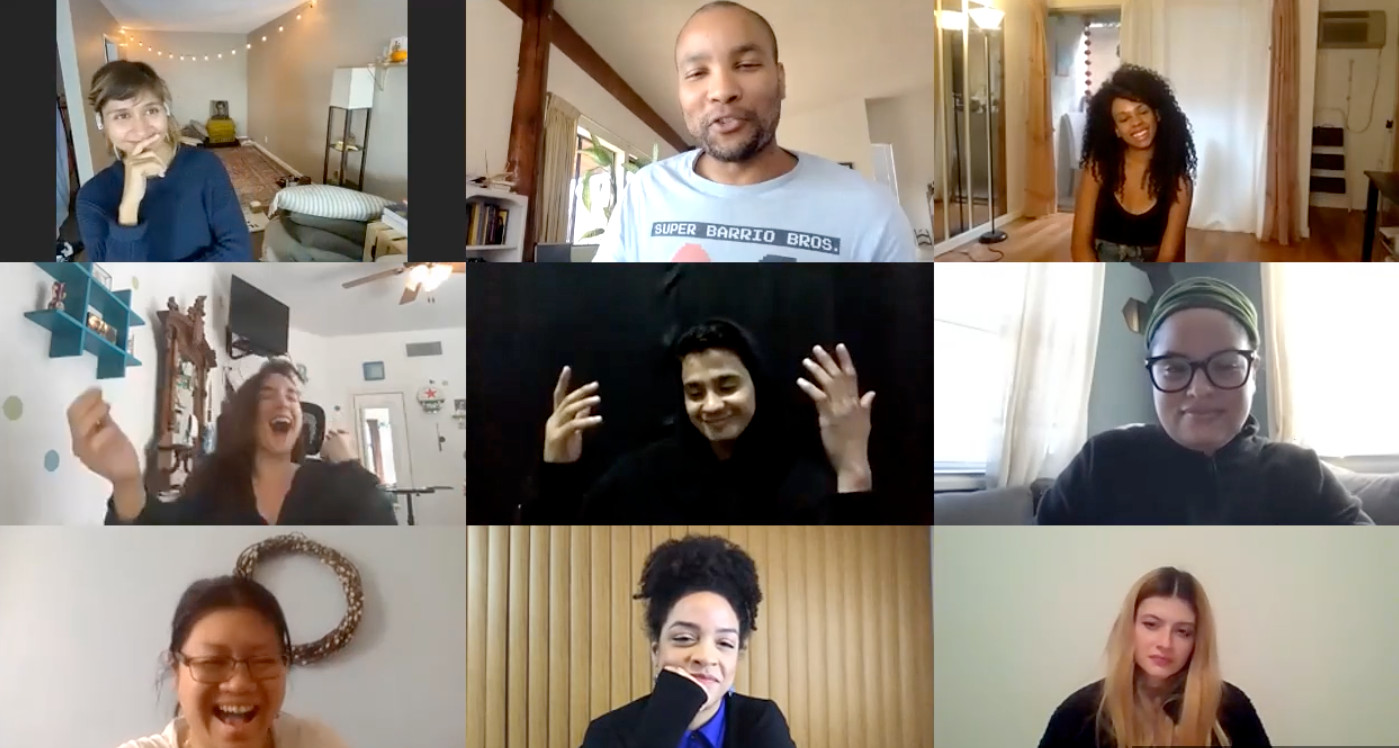 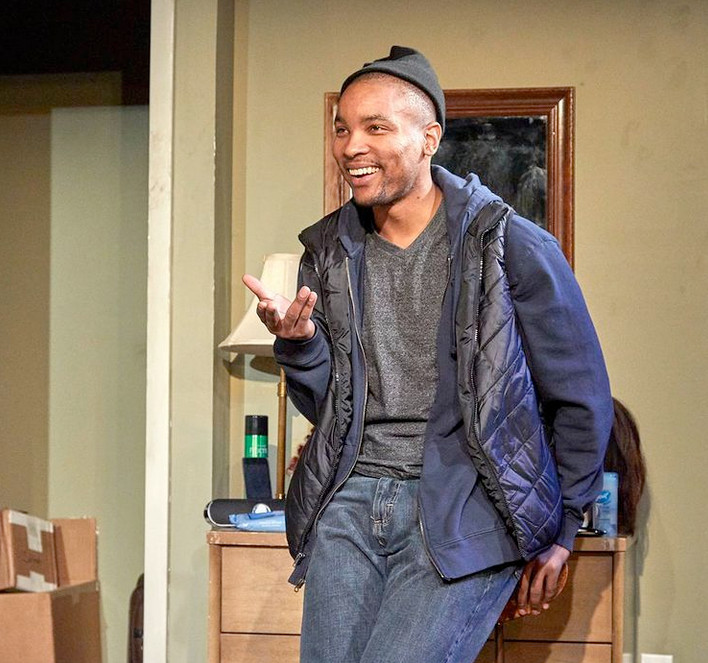 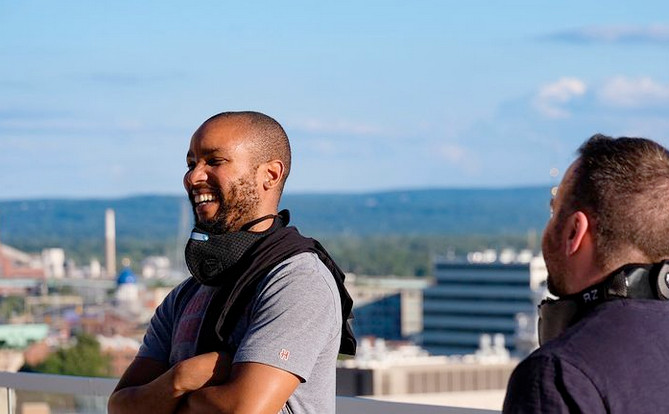 Who else deserves some credit and recognition?
First off, I would like to shout out my mom, sister, brother, my FULL family, and the city of Fort Myers, Florida! Especially Cypress Lake High School’s Class of ’03. I often think about the support I received during my time at my performing arts high school from fellow students, teachers, and administrators. Their belief in me gave me the fuel to choose the quite certain life of a performer. (There is nothing “uncertain” about being an artist and I will fight anyone on that!) I would also like to thank (Oh wait — this is turning into an acceptance speech! Yes!) Dr. Isaac Brundage and “Dr. Grand Ma” Ms. Maleta for their continued guidance and support throughout the years. Paul Calderon for leading me into teaching, directing, and helping to get me my first job as an adjunct professor. And Kevin Khulke and Bethany Godsoe for giving me the tools to become a stronger leader and administrator. (It will be a long journey, but I am down to do the work!) My talent reps for staying with me despite all of my career shifts! The homies Chris, Robbie, Brian, Ehi, and Jerry for being the realest! And finally, my wife for believing in me and our daughter for choosing me as her father!