We had the good fortune of connecting with Alexander Bozicevich and we’ve shared our conversation below.

Hi Alexander, what led you to pursuing a creative path professionally?
Well, I needed to tell my stories. That’s also why I’ve stayed in the pursuit. I don’t know what else there is for me. I don’t mean that to sound dramatic or self-pitying, it’s just that I’ve gotten to know the inside of my brain relatively well. I don’t know how to interface with reality unless I’m crafting some kind of narrative. I don’t know how to exist without a project. The motivation seemed so simple, in theory. I would take all the bits of myself that I didn’t know what to do with in the real world: the quirks, the anxieties, the scattered anecdotes, the random observations, the two-bit philosophizing, the traumas, the shames, the longings, and then I’d repackage all of that into compelling works. I would cast these works out into the world, and thereby achieve the process of sublimation in a manner personally fulfilling, socially valuable, and lucrative.

Here’s the thing: I tried to leave Los Angeles, and I tried not to come at all. I was determined not to be one of those aspiring artist types who harp on about their dreams while languishing in underemployment. Didn’t work. I even did a real major at a respected university. But when it came time to find a real job, I couldn’t do it. I went to the career center and filled out a little survey. I chattered on about wanting to balance a creative career with stability. The survey told me to find some creative-adjacent office job. I told the career counselor that sounded great. She was so happy for me. I wanted to want what she wanted me to want. Then I went back to my dorm, looked up job postings, and felt nauseous. I couldn’t do it. I’m tempted to throw some quotes in here, but I don’t want this to sound like a graduation speech. Suffice to say, look up Thoreau and Angelou if you want more original takes on how so many of us lead lives of quiet desperation while looking for someone to care about our experiences. The dreamer dynamic is a real gamble, one that many of us idealize in theory and loathe in reality. I always tell people that if you want to realize how un-special we all are, move to LA and try to be an actor. You’ll read a character description that could only be for you, but then when you walk into the casting lobby, you’ll see all the different iterations of your competition, many of whom have nicer teeth, classier style, better hair, a stronger voice…you get it. Of course, if you have Instagram or some comparable app, that experience has been made virtual. You can get lost in the shuffle from the comfort of home. Of course, I don’t really believe we’re all that replaceable. I can’t. You don’t believe something like that and keep going, but I do think it speaks to the divide between the inside of our brains and the outside world, especially when artistic inclinations confront their mercantile shadow selves. With writing, the experience is similar but the results are delayed. You finish your drafts in bursts of flow and euphoria, writing and rewriting. You agonize over each line, convinced that if you can just get it right this time, this will be The Thing. Then come the form rejections. You are a number again. Your application to Hogwarts has been denied. Any email that begins with “Thank you for your submission” fills you with dread.

The true promise of the arts is always sublimation. If you were looking for fame, you’d do reality TV or be an influencer or something like that. If you wanted money, you’d learn coding or go to Wall Street. I want more money, and some days I want to be famous, but most days I just want people to care about my stories, to love my characters in the same way that I do. By extension, I also want them to love and care for me. I keep hoping against hope to make something good enough so that I can survive without having to put on that tinny voice we all turn on and off in a world run by corporations. At some point, having a dream became an MLM scheme built on affiliate links, personal brands, follower counts, and marketing jargon. The thing is, I don’t want to sell myself. I don’t want to be a business. I don’t want to live in the Truman Show, blathering with one ear out, afraid to break character and ruin the illusion. I want to find the true things that I’m not able to articulate yet.

Of course, I also want to provide a decent life for myself on the back of creative work, which means convincing someone to pay me for made-up things. Therein lies the contradiction that I haven’t reconciled yet. As I continue along, I can only cling to some feeling of purity by maintaining loyalty to my stories, to the characters that call out in the background of my thoughts. They’re the children of my mind-stuff. I take care of them hoping that one day they’ll take care of me. I’m not sure what else there is besides that, besides the movement forward. Another day to step out of bed. Another day to fill the hours. Another day to create. Another day to submit. Another evening to take stock. Another night to lay head against pillow and hope for something miraculous.

A guy can dream. 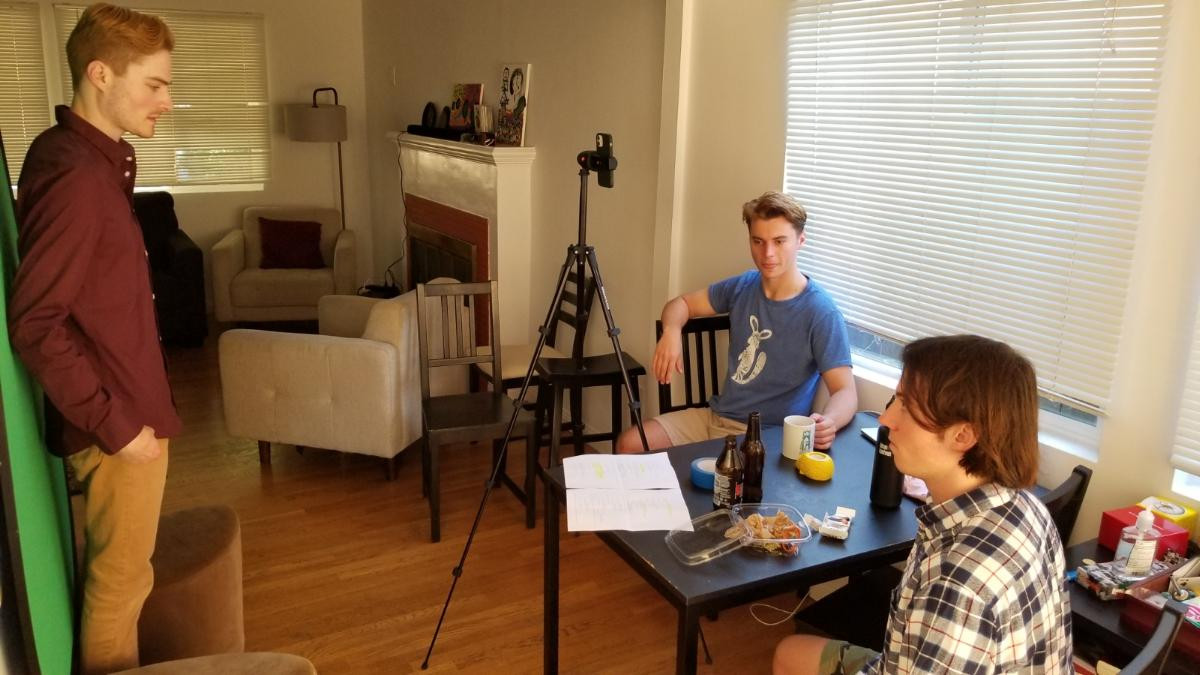 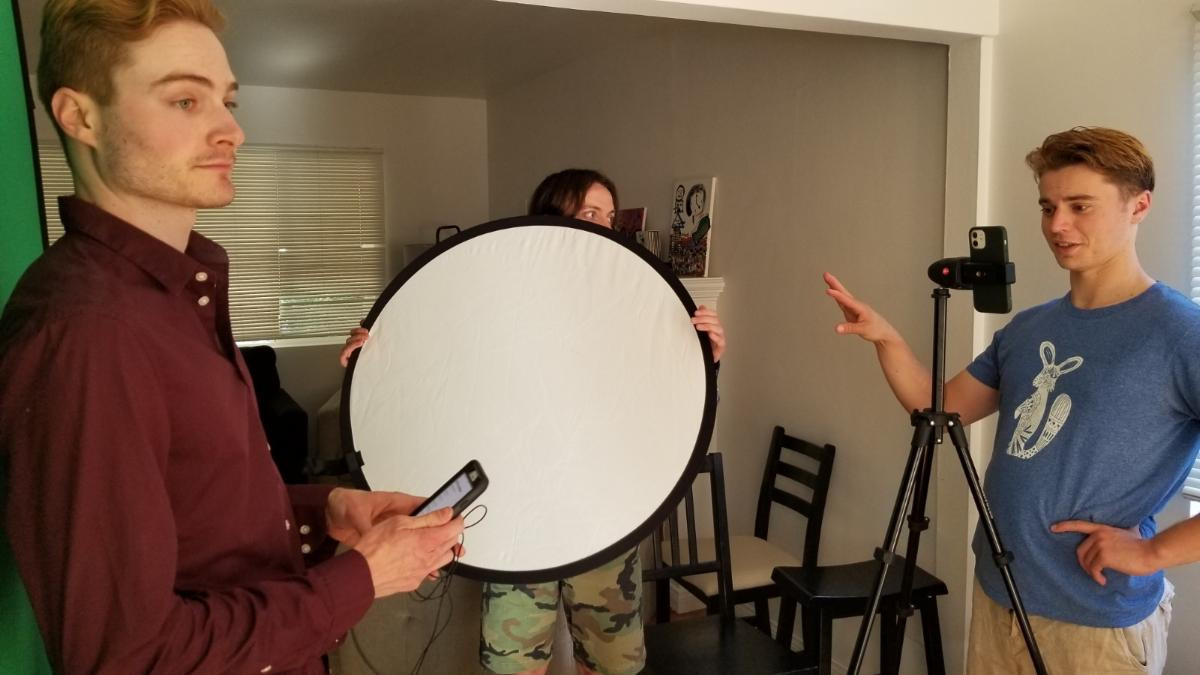 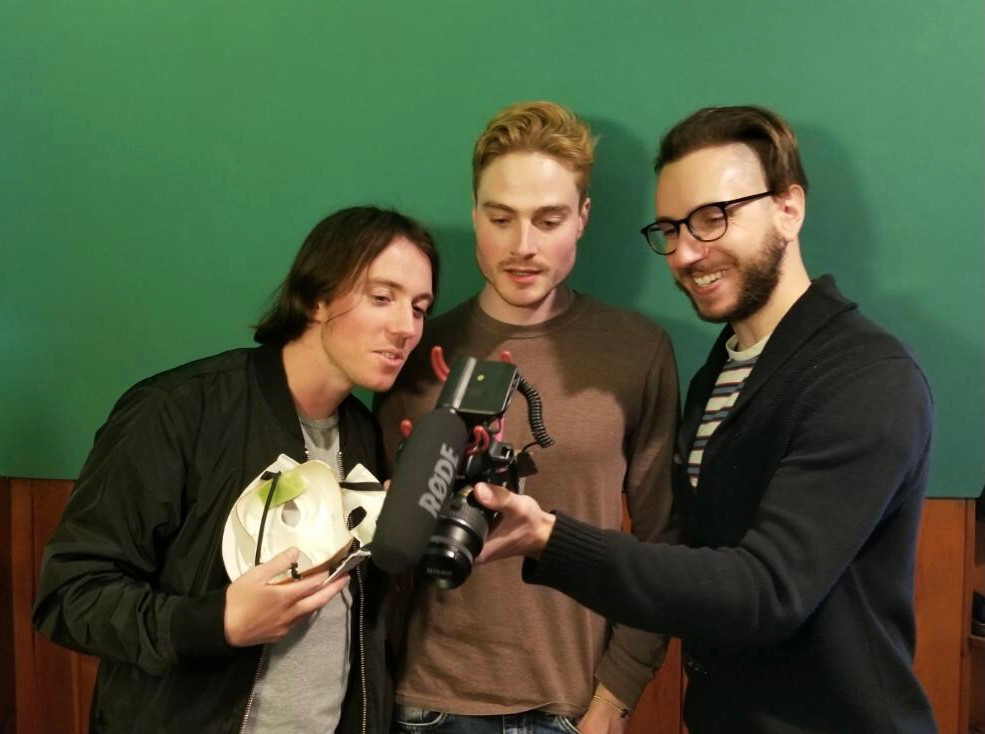 Can you open up a bit about your work and career? We’re big fans and we’d love for our community to learn more about your work.
I’m proud of my smorgasbord. Say what you will about me, I produce. In written work that has meant: a novel, a feature film, two half-hour comedy pilots, a short film, countless comedy sketches, and dozens of original songs. There were a lot of drafts and discarded projects along the way, but that’s the portfolio as of now. In terms of filming original content, I’ve been lucky to find a group of collaborator-companions. So far we’ve filmed a slew of shorts, comedy sketches, and music videos. If you’re a fan of writer-actors who also make music (don’t groan, that’s rude), then I encourage you to check out Rob&Boz, a duo formed with my good friend Rob Turner. Filming the “Make Me Famous” music video under the direction of our other good friend Erik Silverness was one of the more joyful moments of my 2020. I also just filmed a video for a song called “Skull Walls” under the direction of my other good friend Anthony Papastrat, and that’s been one of the more joyful moments of my 2021. But even more is in the works. Stay tuned, as they say.

If anything has helped me survive LA, it’s my tribe of multi-hyphenates inside and outside of this crazy city. The people who let me kvetch and commiserate, the people who read my drafts, the people who are willing to make things with me. I’m so fortunate to have all of them. They keep me going. And I know I’m going to thank them in the shout-out section, but it bears repeating. In case it wasn’t painfully obvious from my answer to the discussion question, my past five and a half years in Los Angeles have been quite a little odyssey. I’ve been told by more established Angelenos that I’m just getting started. To that I say, oy vey. When I first got to Los Angeles, I tried to get involved with anything and everything while adjusting to the city, working all kinds of survival jobs, and having all kinds of insane experiences that I can only hope will inform my work. This year I passed three thousand self submissions on the site LA Casting. I haven’t kept track of all the auditions and shoots. There’s so many little pieces to this puzzle I’m attempting to put together. So many memories and missteps. A lot of kvetching and commiserating (that’s another thing that bears repeating). If it wasn’t clear enough from my agnostic answer to the discussion question, I don’t know if I’ve learned any great lessons other than to keep going, to keep creating, and to keep questioning. If I were a guru, my philosophy would be something called Cynical Idealism. You have to be skeptical enough to survive, and you have to believe enough to make survival worth it.

Any places to eat or things to do that you can share with our readers? If they have a friend visiting town, what are some spots they could take them to?
Clifton’s is my favorite bar. It looks like The Great Gatsy meets the Chronicles of Narnia. They have everything: a floor for swing dancing, a giant fake tree that spans the building’s height, and a hidden Tiki bar. Tenants of the Trees is another go-to spot. It has a club-like interior and an outside bar beneath, you guessed it, trees. My favorite restaurant is El Caserio. It’s a hidden oasis in Silver Lake that serves South American-Italian fusion on a lush, garden-esque patio. I’m a big fan of plant life at my establishments, if you couldn’t tell. In terms of beaches, I’d say do Venice and Santa Monica just because they’re so iconic, but then look for all the quieter spots along the Pacific Coast Highway when you need to decompress from the other tourists. The Getty is a fantastic museum. I’ve never been to the Getty Villa, but a reconstruction of an authentic Roman villa always gets points in my book, so I still recommend it. Walk through Hollywood Boulevard just once to say you did it, then process your disappointment by how much smaller and grimier it looks in person. Echo Park is gorgeous and dirty at the same time, so in that way, it kind of captures the ethos of Los Angeles. As for other parks, the Silver Lake Reservoir is a great picnic spot. I’d recommend Griffith, but that’s almost as much of a cliche as telling you to go to Venice and Santa Monica. Still, hiking to the Hollywood Sign is as quintessential as it gets. I kvetch about LA a lot, but there’s no city quite like it. I’ve lived here five and a half years and I’m still finding hidden gems. You could never do it in just one trip. 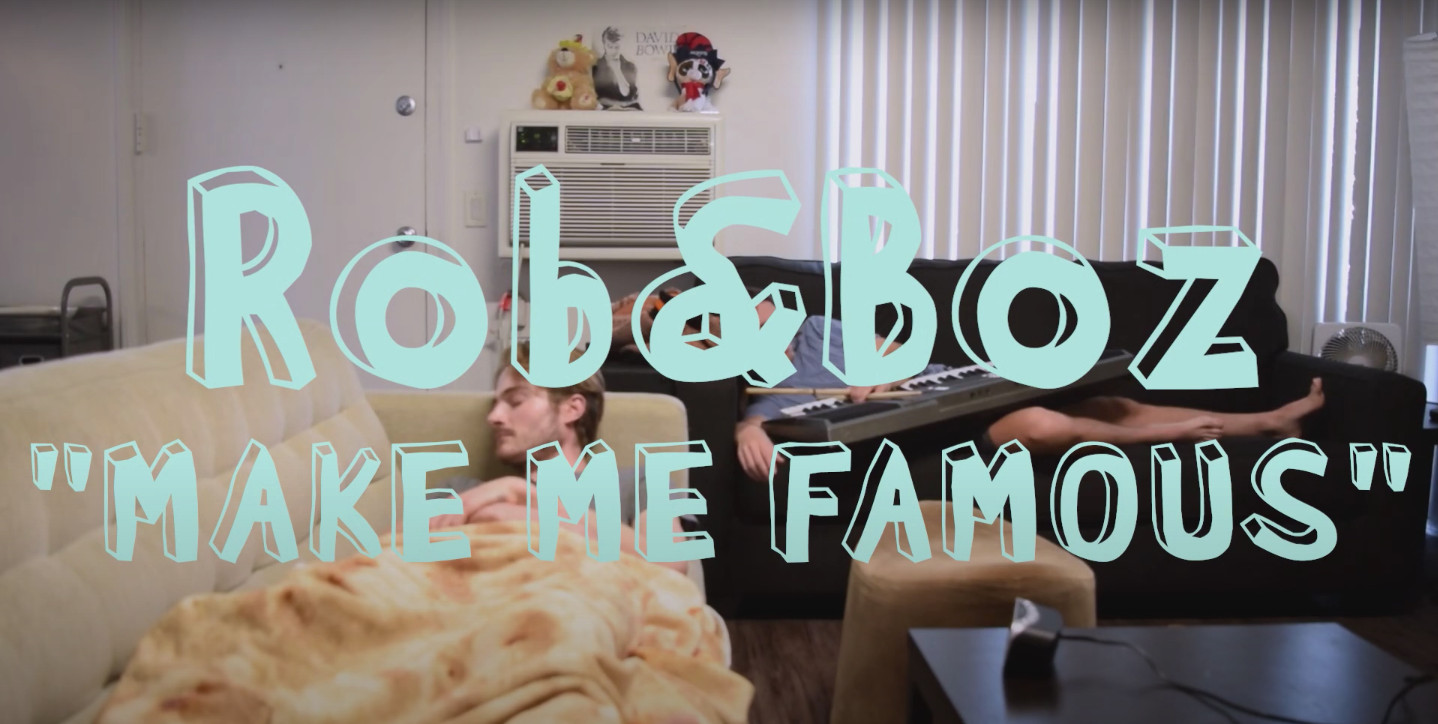 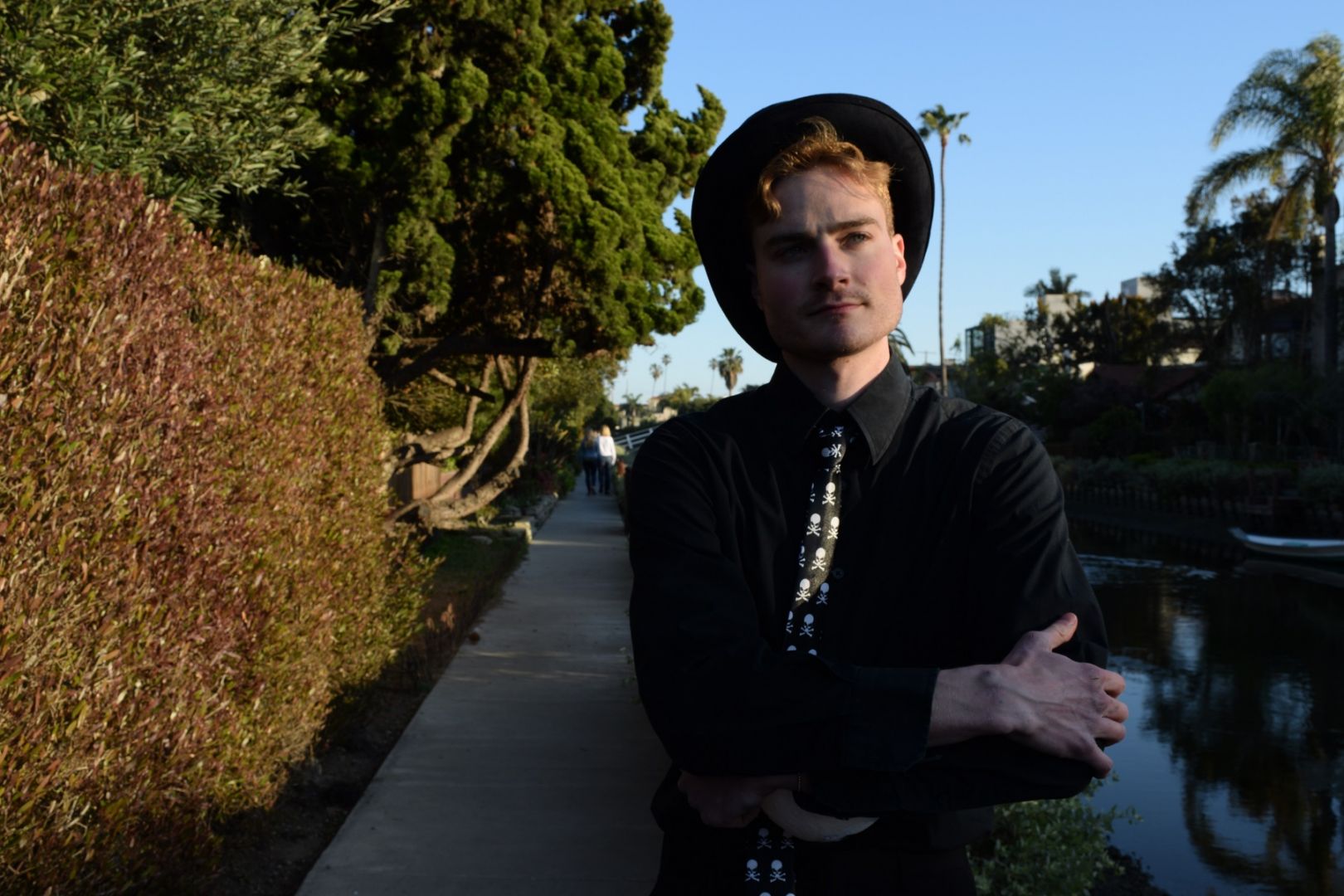 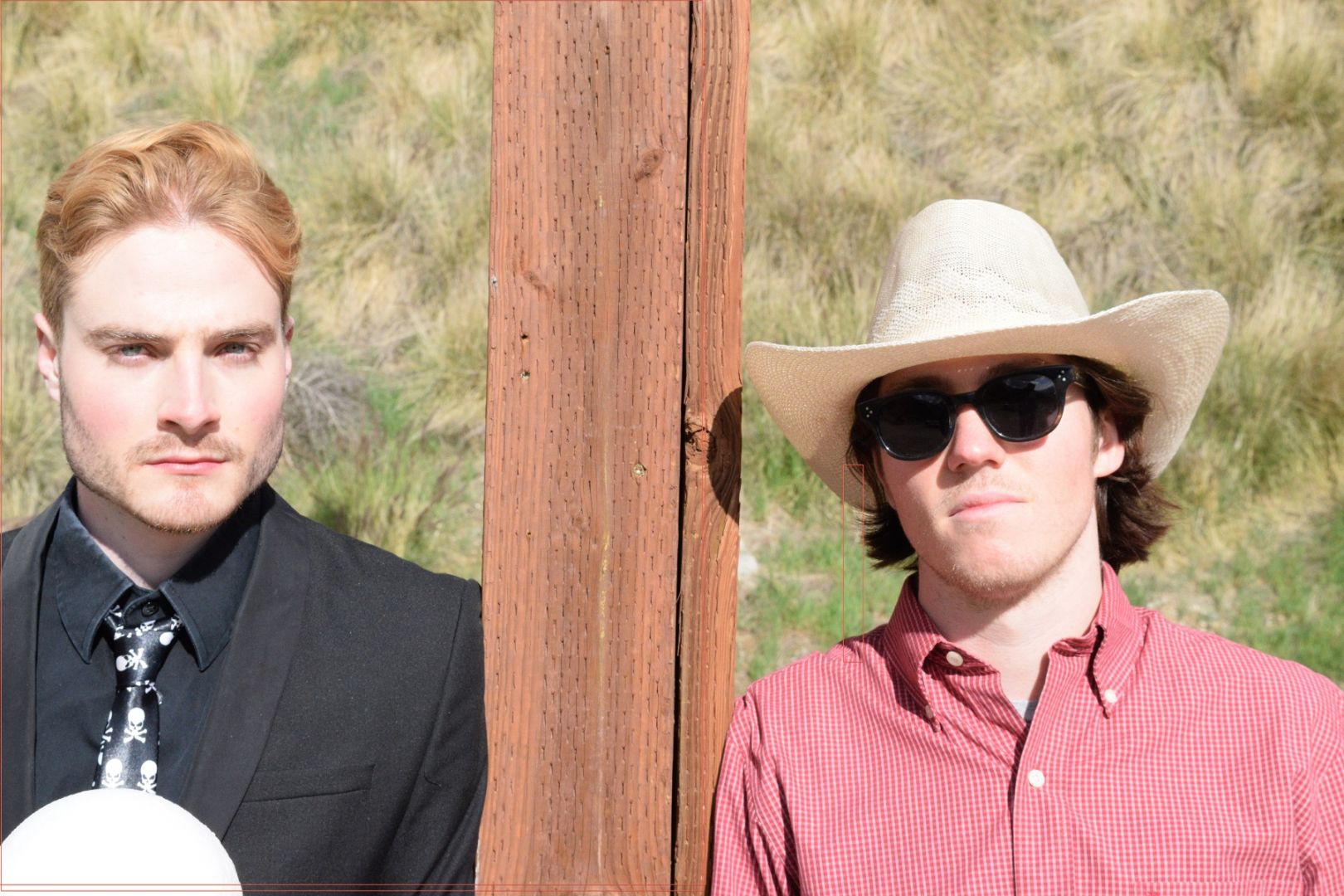 Shoutout is all about shouting out others who you feel deserve additional recognition and exposure. Who would you like to shoutout?
Shout-out to My Tribe of Collaborators (you know who you are)