We had the good fortune of connecting with Alexander Vargas and we’ve shared our conversation below.

Hi Alexander, have you ever found yourself in a spot where you had to decide whether to give up or keep going? How did you make the choice?
I’ve never thought of giving up. Hear me out.

I was five years old when the lights clicked back on during the credits of Jurassic Park, and my papi told me that none of the fantastic things I’d just seen were real. He explained it was just a story that someone had imagined. It should’ve been as tragic as finding out that Santa Claus isn’t real, but I thought it was the coolest thing I’d ever heard. Within weeks of graduating college, I moved to Los Angeles from Miami and bet the farm on screenwriting.

When I write, I feel most myself. Whether in a writers’ room or at an after-dinner fireside chat with friends, you’ll always find me telling stories. It brings me such pure joy, and I’ve learned that not being myself is more painful than any rejection (of which I’ve had many). So I’ve kept on writing no matter what.

I’ve always listened to my gut when deciding what to write next. For years my gut instructed me to illustrate the imagined lives of rival bullfighters, steampunk pirates, rock’n’roll legends, etc. I’m a huge history nerd, so I’ve traditionally filled my scripts with loads of research (which also conveniently allowed me to avoid excavating and sharing my own personal stories).

I experience these instructions from my gut like a backseat driver: abrupt, direct, brutally honest, and has no problem screaming over the radio – “HEYYYY! There’s this unexplored part of the neighborhood over there! Did you see that?! Let’s go check it out!” The ideas start flooding my brain and suddenly I’m at my desk writing like there’s cocaine in my coffee, a bomb under my chair, and a gun to my head. I have to get it all on paper before it evaporates.

Three years ago, my backseat driver commanded me to make a sharp U-turn. “Mi hijo. Write about the family.” I nearly lost control of the car.

For the first time in my creative life, my trusted passenger not only sounded like someone I knew – my beloved Abuela (she’s always been simply “Abue” to me) – but they were also asking me to do something that felt foreign and dangerous. Ever since I was little, Abue insisted I write about Cuba with zealous defiance. But I resisted. For years.

I was born in the States and spent my Saturday mornings watching movies; my father’s Saturday morning “cartoons” were televised executions. I was terrified to open my family’s wounds at all, let alone to the world in a screenplay. Were these my stories to tell?

Papi fleeing Cuba at nine years old by himself on a plane with no more than three outfits, faulty memories, and the wherewithal of a child. His exclaiming “Castro is a sonuvabitch!” as he gobbled down his first meal in America – a Whopper – when he landed in Miami.

How about the subtly darker stories of assimilation, the opportunistic malpractice of doctors Abue trusted, and intergenerational trauma? I felt completely out of my depth yet simultaneously morally obligated to tell my family’s stories.

Instead of giving up on writing these deeply personal stories, I first tackled the story of my family friend tasked by the CIA with assassinating Che Guevara. It was the fastest yet most painful script I had written to date.

I remember the night I finished the script, I dreamt of Abue. She told me how proud she was that I finally wrote about Cuba, and that I was about to embark on a new life chapter.

I woke up to twelve missed calls from my family. Abue died during the night.

Exactly a year to the day since her funeral, I received my first paycheck for writing a screenplay. From that script. It was July of 2020, so I celebrated alone at home. I ordered Abue’s best dish, ropa vieja, from my favorite Cuban restaurant in Los Angeles. As I enjoyed slow-cooked beef shredded by practiced hands I smiled, cried, and vowed to keep writing. To keep telling the stories that I hold dear. Even as a child watching Jurassic Park, I never imagined I could be so happy and fulfilled.

And now, I’m finally tackling my family’s journey as political refugees, my most personal screenplay yet. Now not only am I no longer afraid of sharing myself in my writing. I also understand that in my creative process, I can never truly escape myself. I am a better writer for not giving up on telling my stories, and I have my backseat driver to thank for that.

Turns out it’s true what they say – the objects in the mirrors are always closer than they appear. 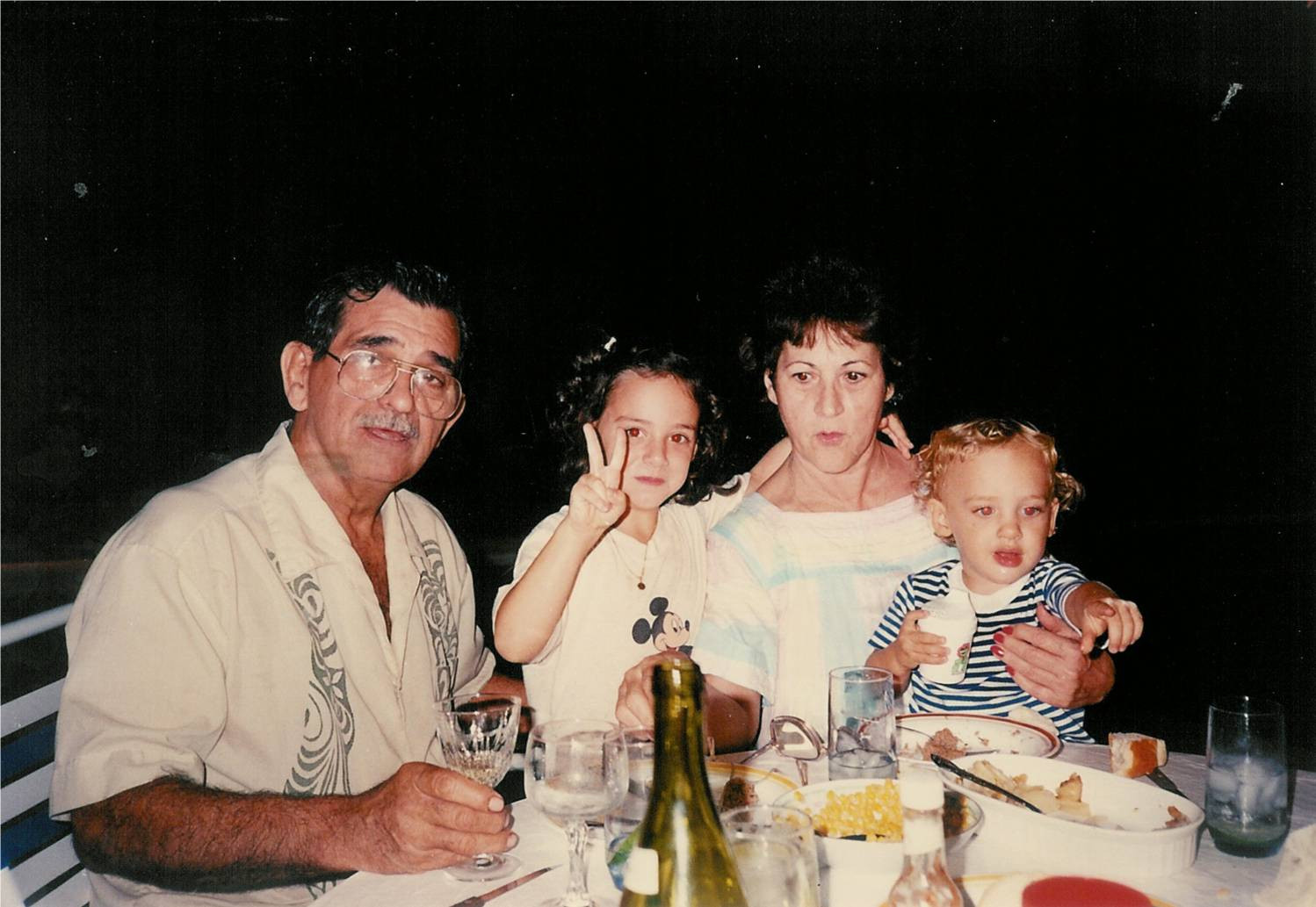 Alright, so let’s hear a bit more about your art. What sets you apart from others? How did you get to where you are today professionally.
Being a huge history nerd definitely helps set my writing apart. I feel like yesterday still has a lot to say about today. It’s like this Trojan horse that allows me indirectly to comment on what’s happening right now in the world, especially given that our political climate is so contentious. I love digging through research to find that nugget of detail that makes a scene pop. It’s equally satisfying to fold a historical gem into a character to make them feel that much more believable and their world more liveable.

I’m proud of my work ethic and discipline, which my grandparents instilled in me. Hard-working. Nose to the grindstone. When I first moved out here, I hustled on the assistant track and took home as many scripts as possible during the weekend read. I wanted to devour everything and soak in as much as I could. I must’ve read over 2,000 scripts. It was a real education. I’ve watched countless movies, but it’s a totally different experience to read a script and imagine the movie or show. Understanding the blueprints of scenes and how writers engineer them on the page has shaped my writing.

Those assistant jobs were intense. Long hours coupled with endless tasks and errands made it hard to squeeze in writing. I kept myself grounded in the mornings before work by writing. Nobody else could take that from me; it was my way of taking charge. I’ve always had this constant urge to keep pumping out the scripts — I am proud to have 18 features and 4 pilots under my belt. And even though I’m writing this with a carpal tunnel brace on my left hand, tomorrow morning I’ll be back in the saddle. 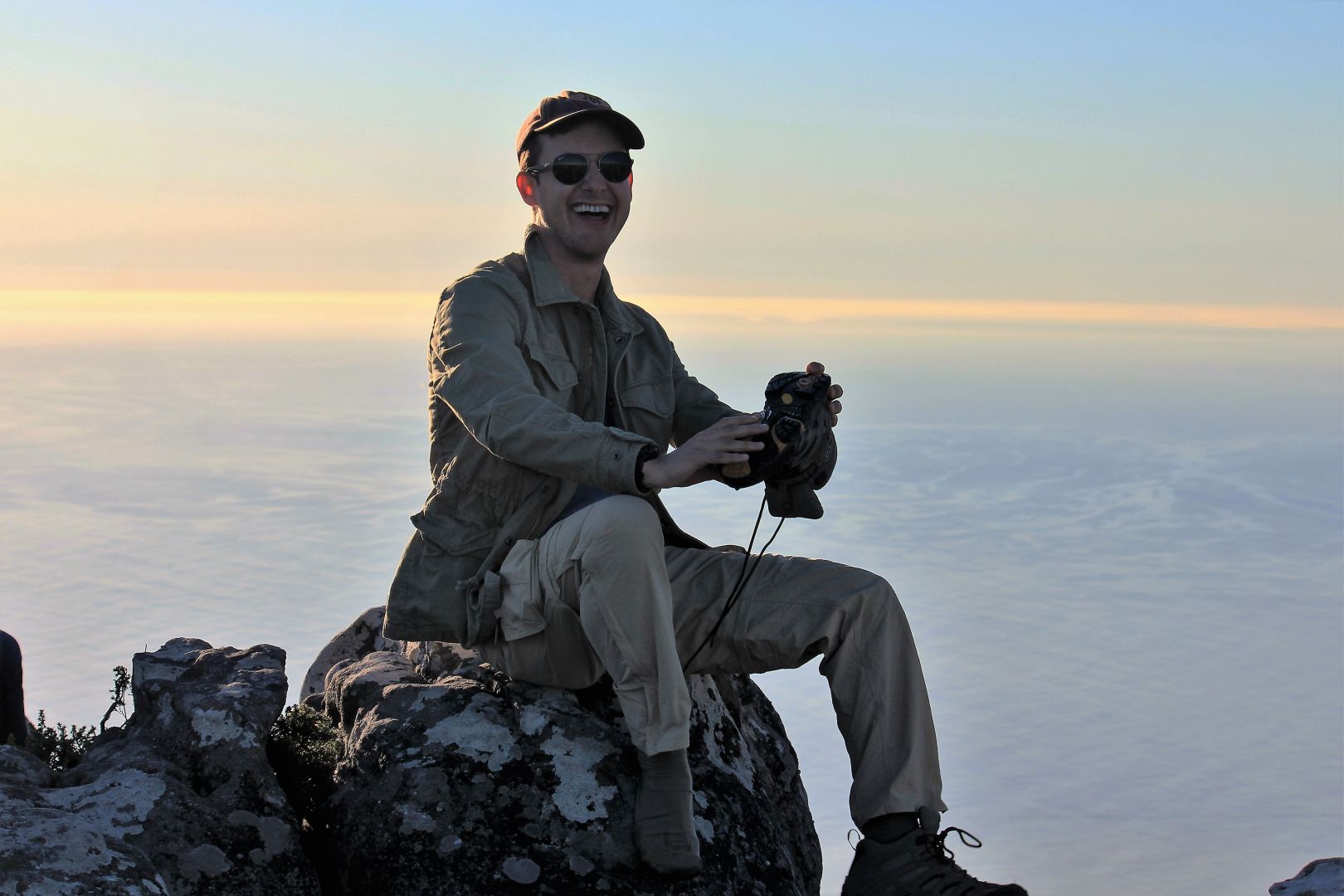 Let’s say your best friend was visiting the area and you wanted to show them the best time ever. Where would you take them? Give us a little itinerary – say it was a week long trip, where would you eat, drink, visit, hang out, etc.
We would only need one night, and I would tell my friend to bring their passport because I plan to take them around the world. I’d ask them to wear a blindfold and carefully lead them to the corner of Edgecliffe Drive and Sunset Blvd (watch out for the very uneven sidewalk there) in my neighborhood of Silver Lake. I’d gently spin them around for good measure and then release the blindfold.

“First, we’ll be flying to Japan,” I’d say while pointing at Kombu Sushi for sushi and sake to fire up the tastebuds. I’d quickly order the Citron Roll and/or Salmon Fusion with a chilled bottle of Sake Sho Chiku Bai and the check. Keeping them on their toes, we’d wrap up and have a quick layover next door in Mexico (El Condor) for queso flameado and a spicy margarita. It’s a fun, vibrant spot, and I’d sneak us upstairs on the couch so we could make our own little universe.

In between the meals and drinks, it would be storytime. No phones, though. Just good food and better company. I’d wanna hear about them. Their hopes, dreams, and fears.

What is something I’ve never asked them? I wouldn’t take the night for granted. It would be like we haven’t seen each other in ages, and tomorrow they’re being shipped off internationally for an indeterminate stretch of time.

At this point, they may be hungry for a bigger meal. I’d get that. So, we’d go to Pine and Crane (Taiwan) for some Dan Dan Noodles, Pork Dumplings, and Bok Choy Potstickers. There would most likely be a line, but that’s okay because the stories would still be flowing on tap.

At this point, maybe it’d be around 10PM and we’d be at a crossroads. I’d give them the keys–

Are you hungry still? Let’s hop on a train to Peru and eat at Causita.

How’s the sweet tooth? Try Pazzo Gelato. A family-owned spot. Their flavors rotate, but you can’t go wrong with the usual suspects (coffee, toasted coconut, or a lemon sorbetto).

Or maybe we’d need to burn off the alcohol and food. I’d run us down the street to the local dance hall, El Cid, and we’d lose ourselves on the dance floor.

Drenched in sweat, we’d recuperate on the open-air patio and keep chatting. I’d end the night on a promise. I wouldn’t let another opportunity pass to see them. I would tell them how much I love and appreciate them and how I am truly blessed to have a friend like them in my life.

PS: If this sounds like a date, that’s because it was. I did this Tour de Silver Lake with my now partner on her first night in Silver Lake (and second month in LA).

Somewhere between Japan and Mexico, or maybe it was Taiwan, we fell in love.

PPS: I can’t wait to marry her. 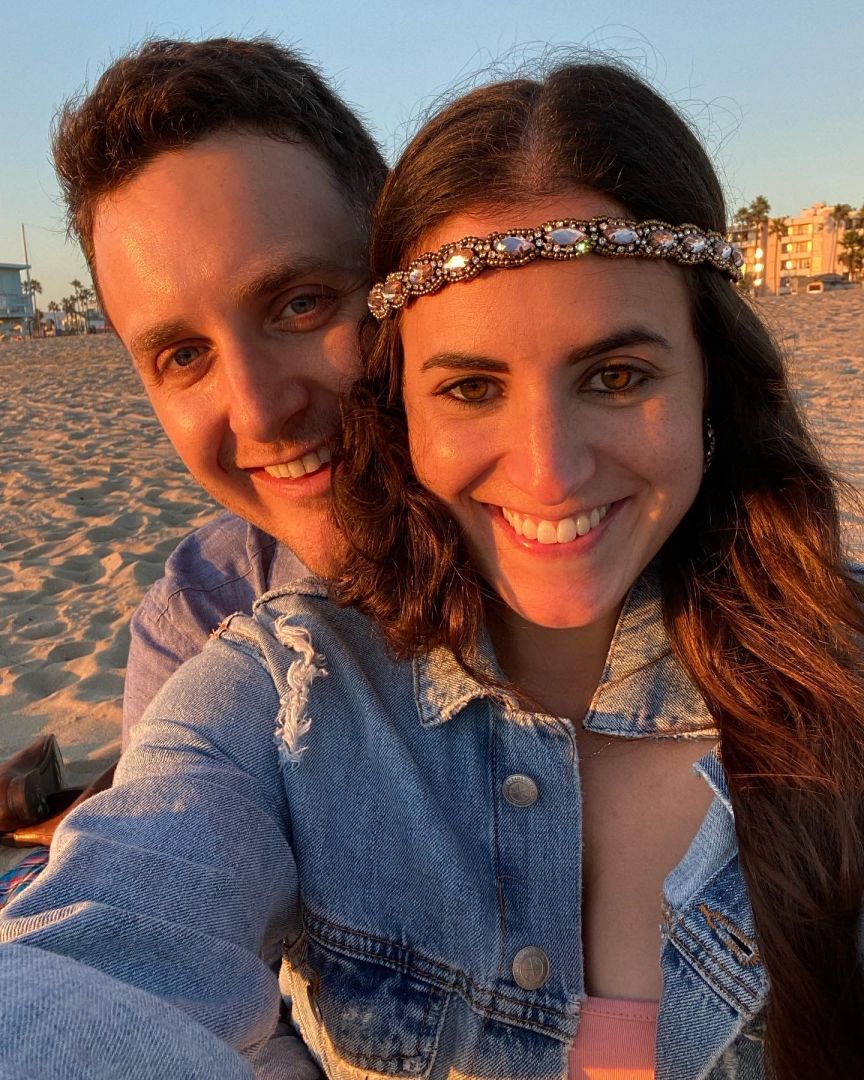 Shoutout is all about shouting out others who you feel deserve additional recognition and exposure. Who would you like to shoutout?
The seven folks in my writers’ group. They are incredibly talented and amazing human beings. I am grateful to be in their company. Every week, one of us submits one of our scripts to be workshopped on Wednesday night.

I have found it invaluable to have a safe space to share my works-in-progress with people whose input I value and who respect me enough to give me honest, constructive feedback. Especially when I’m stuck. Their notes, pitches, and guidance have undeniably helped me grow as a writer.

Their emotional support has arguably been even more impactful on my writing and certainly on my mental health. Any sort of creative pursuit comes with rejection. We’re all gonna hit detours and have setbacks ad nauseam. That’s why a support system – whether it’s your partner, family, friends, mentors, etc. – is vital.

I picture my writers’ group like one of those safety tethers used by astronauts on a spacewalk. Working on a script can be terrifyingly lonely (as I can only imagine I would feel in space). I am truly blessed to have the world’s sturdiest tether. The group gently eases me out the door to fix the spacecraft. They also buzz into my headset with encouraging words. And when I’m running low on oxygen or they sense something is wrong, they reel me in. 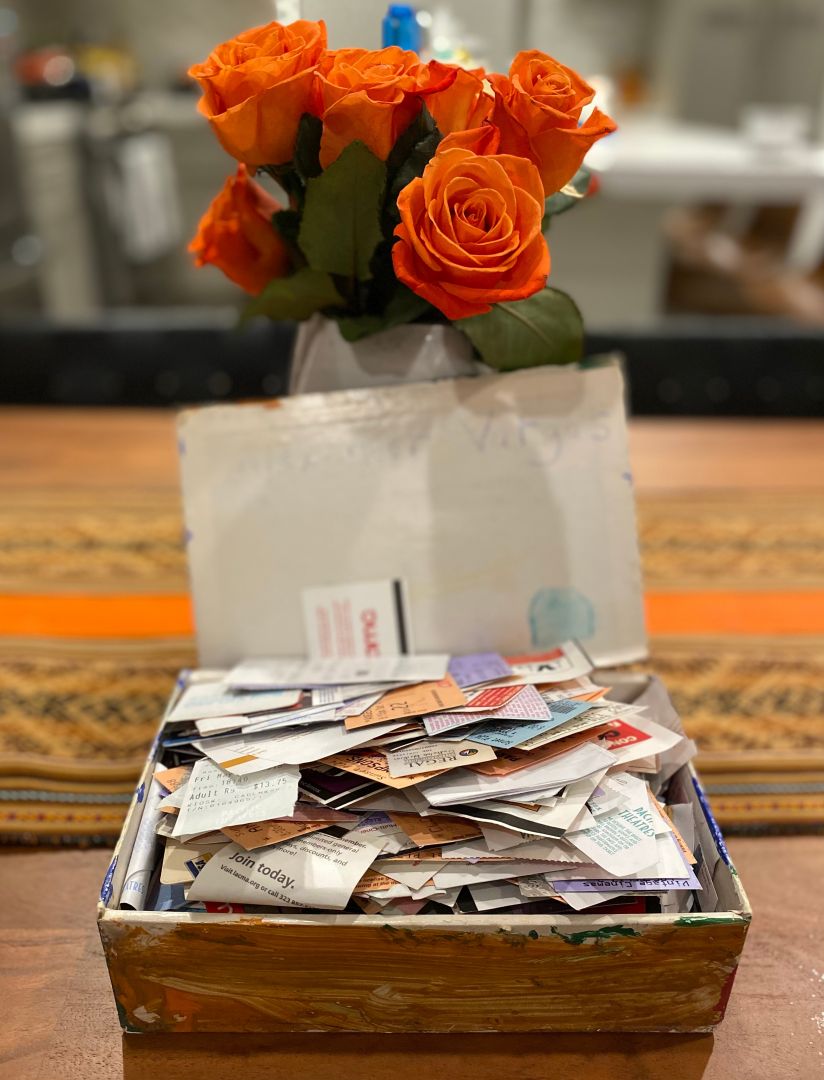