We had the good fortune of connecting with Ashley Bad and we’ve shared our conversation below.

Hi Ashley, why did you decide to pursue a creative path?
Though my parents are not particularly religious, I grew up in a strict religious Catholic environment. During most of my life I was sent to Catholic schools as well as an all-girls Catholic Academy to have a better education than my family did. These schools were blue ribbon and the students were primarily caucasian young women of an upperclass background. I was a mixed race person of color coming from a lower middle class background. Growing up I felt I did not have anyone to connect with or identify with so I was forced to create my own world.

Prior to my school years, I can remember as early as the age of 3, that I’ve always had eccentric tastes. I spent a lot of time alone as I’m an only child, and there was no one to tell me that my interests were unique… unconventional… or strange, even. It wasn’t until I entered environments where I interacted with other children that I realized that I had very niche and specific interests. My tastes in art, music, film, and even my own culture and lifestyle was so different and seemed to be misunderstood and looked down upon by my peers, though I stayed open and willing to try to understand theirs. This drove me to find others that were more open and likeminded. Art became the door than opened up everything to me. Art became my mode of expression and caused me to dive headfirst into the underground NYC alternative nightlife. I wanted to escape the repression of expression and the limits of close-minded groups. I wanted to explore the world, meet new people of all walks of life, religion, color, gender, sex and of passion. I knew that a creative career of music and performance art was the path for me. 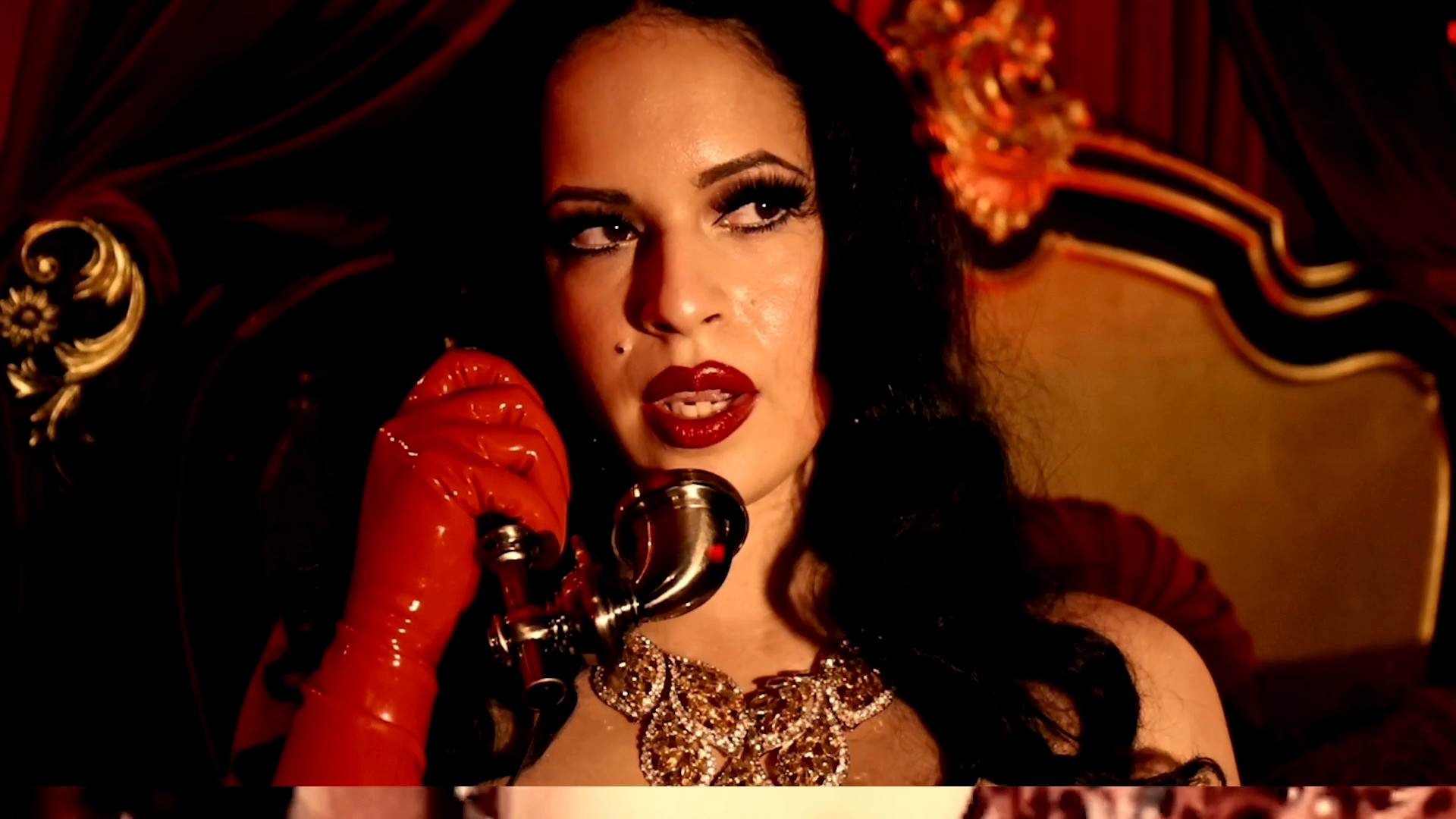 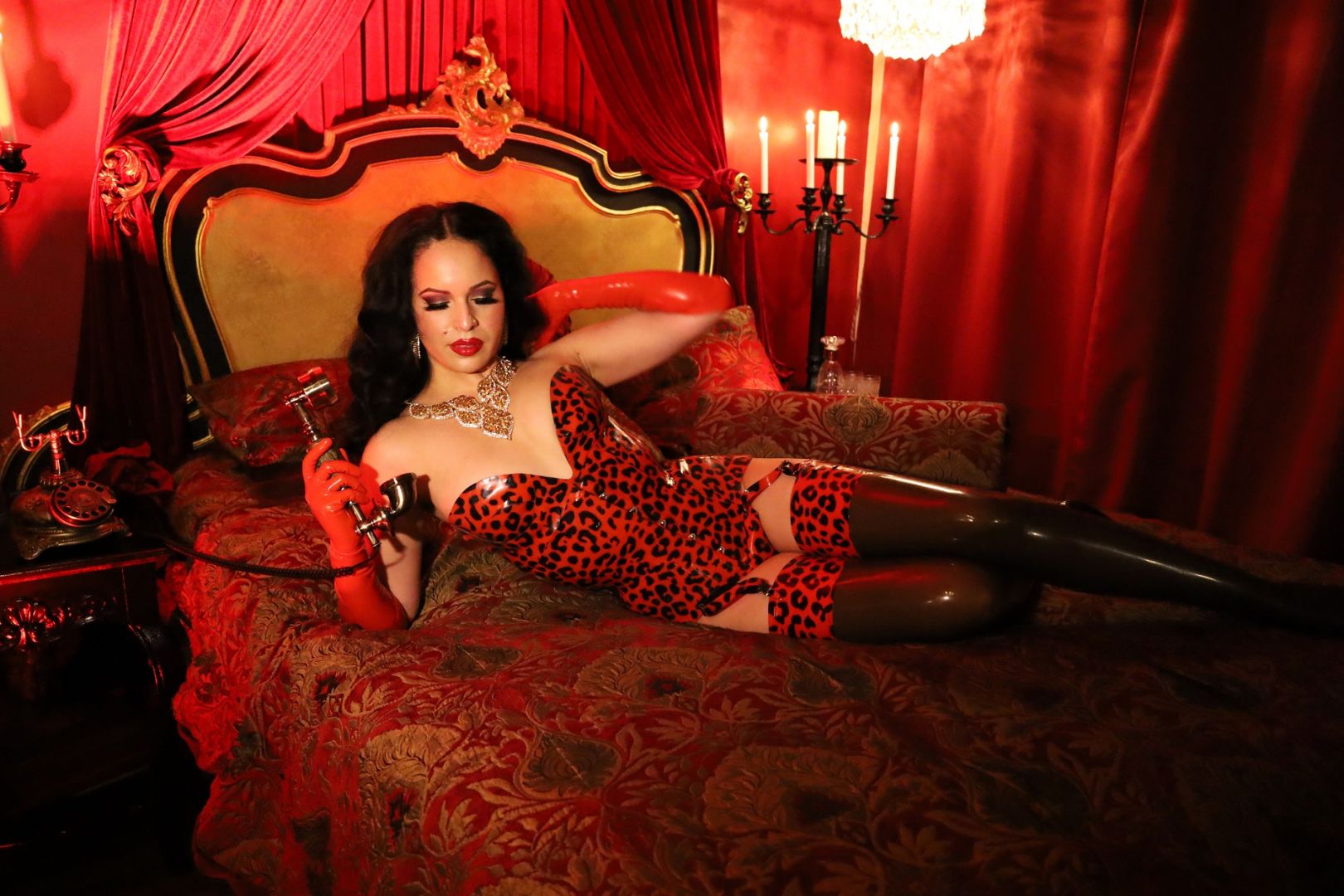 Alright, so let’s move onto what keeps you busy professionally?
As a young college student in NYC, I decided to try my hand at glamour-fetish modeling, something that attracted me since I was a teenager and that was seemingly taboo in mainstream media but was something that was very much present in music and art consistently throughout history in the US, coming in and out of fashion in waves. I had a really strong interest not just in this niche part of the modeling industry but the creative styling of its provocative garments and the feelings it elicited in it’s wearers and viewers. Just in a few years of modeling, I quickly landed the opportunity to actually work for one of the designers I had been hired by but in a very different way. I was trained and became a latex crafter and occasional designer. I eventually worked for two NYC Latex Companies and through my work with latex clothing, I started to create different looks, stylings, and even different characters. I was able to use these skills as a basis for formulating burlesque shows and brought them to the stage. One thing lead to another, and each skill I acquired lended a hand to my development as a performer. I also spent a lot of time in the underground alternative, latex, and goth music clubs watching art performers, musicians, side show, and burlesque acts that all were huge influences on my growth as an artist. I can akin my evolution to something of a slow burn, it was not the easiest to prove myself in one of the hardest places in the world to be successful – New York City – especially when you are a young, female, poc. You really have to show respect to other artists who came before you to be able to gain it. I had many bumps in the road with the relationship I was in, as my male partner at the time was equal parts my mentor and unbeknownst at the time, my occasional competitor. Something that was extremely stressful. Also being an underground performer in a very expensive city meant that you were literally living paycheck to paycheck barely making ends meat while attempting to create the artistic illusion of glamour. It was drive and self confidence that kept me going, even though I may not have always believed in myself – I knew I had to keep going because there was nothing else that meant more to me. I was extremely lucky to have a really small close knit support group of friends, especially the women in my life, who supported me and were my biggest cheerleaders.

And it’s the women- the female representations and the portrayals of women in media and in my life that have always been the main focus of my art. I consciously like to explore feminist themes and feminine taboos in my music. My solo work is specifically inspired by my love of classic mid-century film noir, such as Kiss Me Deadly, Laura, Sorry, Wrong Number, as well as surrealist neo noir and tech noir films like Mulholland Drive, Lost Highway, and Dark City. For years as a latex burlesque performer I have always portrayed various versions of the Femme Fatale pulp fiction archetype both on stage and off -it’s an image that I’ve been fascinated by. I’ve always loved the fantasy of these strong dominate female characters, and in some cases they can be victim as well. I thoroughly enjoy the entertainment aspect of cinema and it’s fun campiness. I want to let women, all women, know that they are free to be who they want to be. They can be both mother and lover. Dominant and/or submissive, if they so choose. Be both masculine and feminine. They can be sexual, kinky or not, and still be respected. I want all genders to be allowed the same opportunities and respect… and most importantly, I want them to have consensual fun, fantasize, and feel comfortable in their skin.

If you had a friend visiting you, what are some of the local spots you’d want to take them around to?
For the best time ever, I highly recommend the Griffith Observatory for it’s breathtaking views and historical ties to Hollywood cinema such as Rebel Without A Cause which was originally shot there, the Santa Monica Pier for it’s fun fair and its ocean views, The Kings Head for the perfect English Breakfast, The Georgian Hotel for its haunting old Hollywood Art Deco and delicious cocktails for afternoon brunch, Yamashiro Hollywood for dinner as it’s the only place in LA where you can eat at an impeccable Japanese palace built in 1911 for sushi and drool over it’s amazing views overlooking the city, El Cid for it’s bewitching classical and neo- burlesque shows, The Record Parlour for its authentic vintage vinyl collection, The Shrine at Hollywood Forever, The Mayan Theatre, and The Los Angeles Theater (for all 3 of these beautiful music venues host a multitude of eclectic music acts and all display some of the most incredible architecture from Mayan to French baroque), The Last Bookstore for pulp fiction and noir, and The Magic Castle in Hollywood for the most incredibly talented magicians, decor, food and faire. 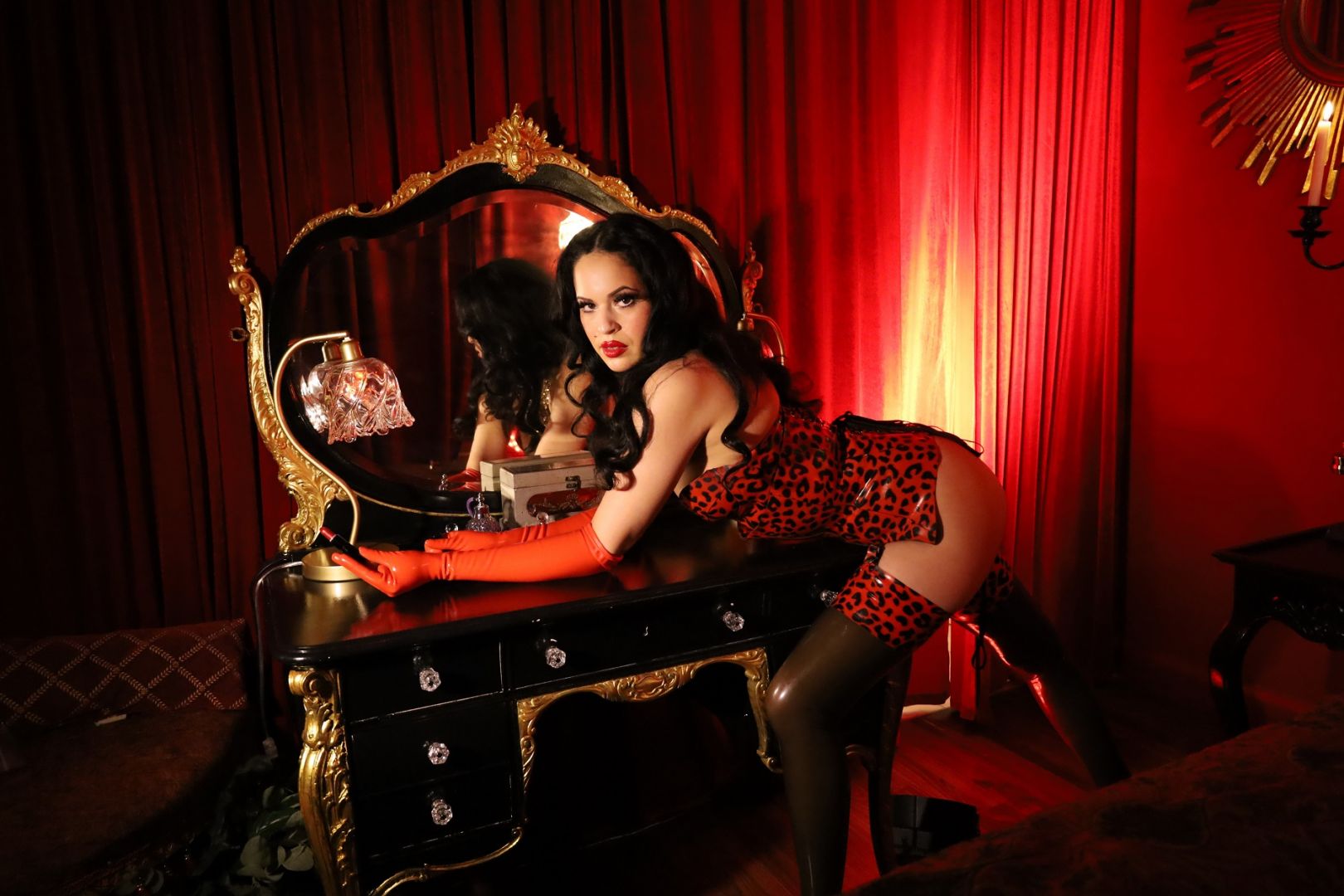 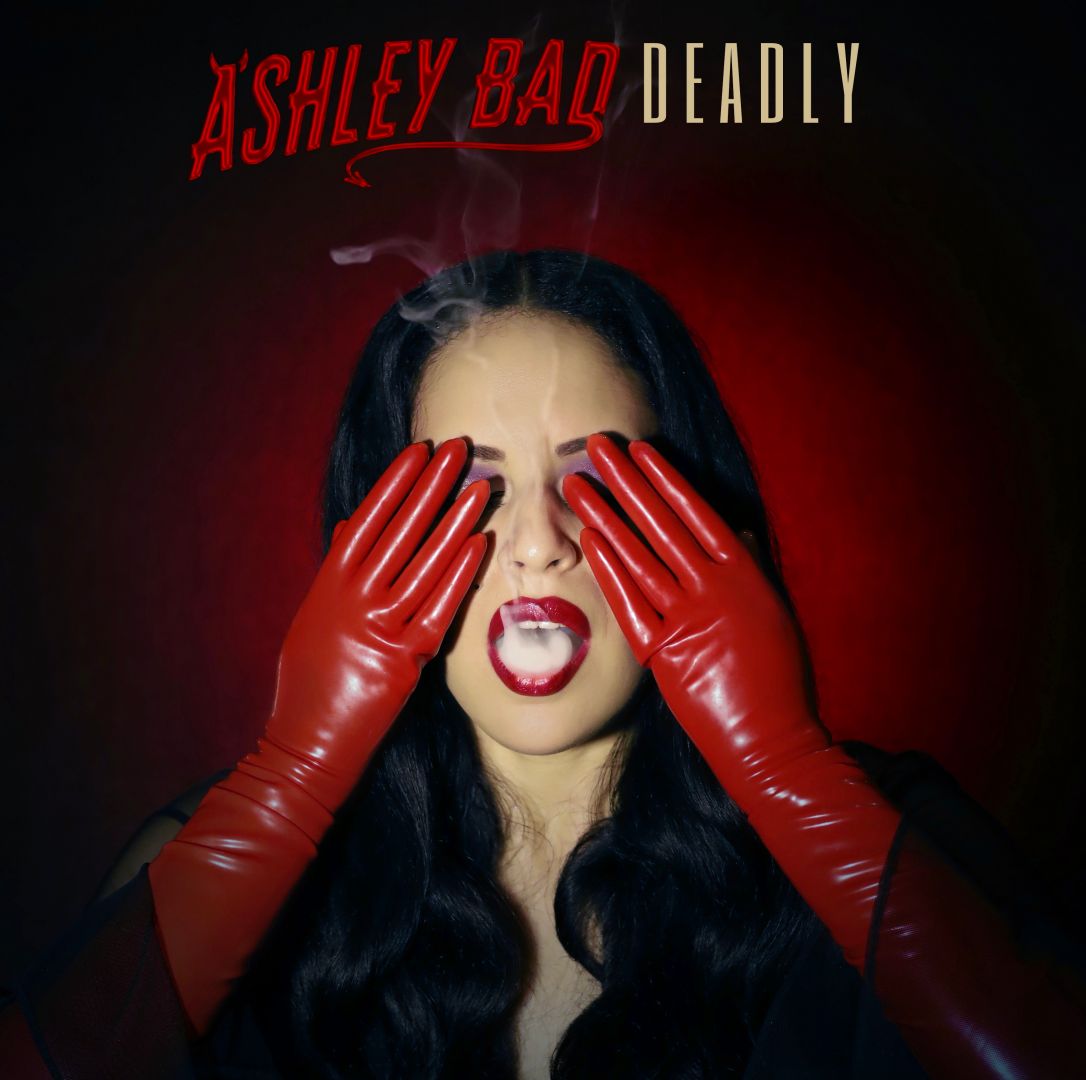 Who else deserves some credit and recognition?
I’d like to give a big shoutout to performance artist Kembra Pfahler of The Voluptuous Horror Of Karen Black for inspiring me to create my own music, for her creation of her philosophy “Availablism” and her promotion of future feminism which inspires me each day; also musician Mark Gemini Thwaite for his undying support, love, encouragement for my solo music endeavors; electropunk musician and creativity inspirator Karl Learmont for his friendship, kindness, help, and incredible strength throughout the years; rock ’n roll music, 40s & 50s film noir, pulp noir, sci-fi fi, 90s tech noir cinema, as well as the representation of all of the strong retro and modern femme fatale caricatures of the last century, Bettie Page, the multitude of fetish and men’s magazines that I wasn’t supposed to see as child, and the nuns of Immaculate Heart Academy who loved to punish me!