We had the good fortune of connecting with Blake Armstrong and we’ve shared our conversation below.

Hi Blake, we’d love to hear about how you approach risk and risk-taking
I think just about anyone will tell you that most great successes in career and life require some level of calculated risk.

For me, I moved to Los Angeles from a small town in southern Illinois when I was only eighteen years old. I had never visited, I had no clue what I would do — I just knew that my love of film and art couldn’t be satisfied where I grew up — and thank goodness my parents understood that too. That risk reaped the reward of a major head-start in the film and TV industry before I was even old enough to drink.

It was so beneficial to have that early experience which led to an almost ten year career working in television post-production. And mind you, I had never touched editing software or possessed the first clue what most of the process looked like, but I listened, learned and eventually took a shot at several jobs (that I can admit now) I probably wasn’t even qualified to take. But as the saying goes, ‘fake it until you make it’ and I worked hard to learn and be a step ahead wherever I ended up. The ‘Sink or swim’ principle is a great life teacher.

I could have worked in TV forever — I had a good network of friends and colleagues in the industry, I was pretty good at my job and I liked it well enough. But when the opportunity came to do art for movies and TV I had to jump at it — essentially closing the book on those ten years in TV.

Like most people at some point, I was having a bit of a transition year — I had broken up with my girlfriend, was between jobs and I thought , what the heck, and sent I my resume and small portfolio out to any job ad I could find looking for a photoshop-centric designer. Lo and behold I landed at BLT Communications, one of the biggest agencies in Los Angeles for movie and TV Marketing. It was a big jump — not only was it a wholly new side of industry to learn, but I had to start at the bottom again. Low pay, long hours, having to prove myself. But I had never been happier. Making that choice and taking that risk was so pivotal. I took to the job like a fish to water and love everything about it!

It definitely goes to show that a little risk can take you from a good place to a great place if you’re willing to take the jump. Life is short and its good to take the occasional leap! 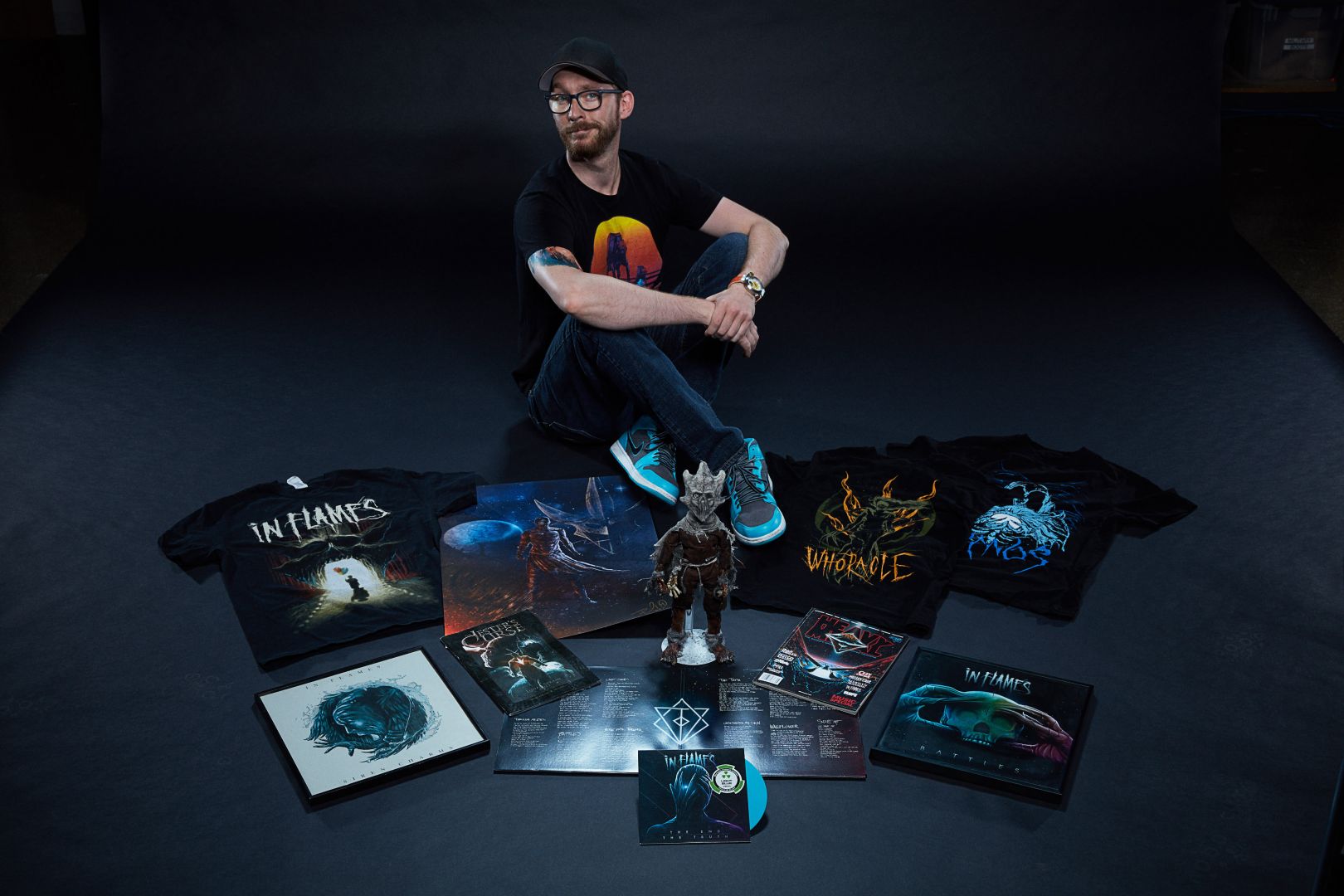 Alright, so let’s move onto what keeps you busy professionally?
I currently design artwork for film, TV, music and just about anything in-between. Heavy Metal fans might have seen my work with In Flames, Slayer, Kataklysm, Carnifex and more. I’ve worked on a multitude of Film and Television projects like Sonic the Hedgehog, Ready Player One, Ford V Ferrari and Stranger Things 3. The latter just won two Clio awards for the campaign.

I grew up in a small, rural, Southern Illinois town called Metropolis. I was always interested in art and film. My love of film led me to art — I would draw, build props and make up stories all through my youth. I made little silly movies on our hi-8 camera. My parents encouraged and nurtured my creativity by getting me private painting lessons, putting me in plays and humoring my weak attempts to play guitar. If they saw me invest, they tried to help me along. I’ll forever be grateful that they supported the spark.

Once in high school, I was truly blessed to have incredible mentors that not only supported my artistic interests but pushed me to take them as far as I could. Craig Rhodes, my art teacher opened my eyes to find my artistic voice and own it. Brian Green, my history teacher/Karate instructor taught me to be fearless and to jump on opportunities. I would do portraits for my teachers and earn extra credit which was one of the more valuable things I learned in my teens – creating art people wanted to buy me a lot of goodwill and good grades. It also made me realize I had a knack for it and boosted my confidence.

As soon as I graduated I seized on an opportunity to come out to LA through a family friend named Eric Streit. He was working as a producer and let me crash on his couch while I tried to land a job somewhere in the industry. Through some clever resume doctoring and begging, I was able to land several jobs in television post-production. This allowed me to side-step college completely as I was already working and earning a good living in my late teens/the early twenties. I worked my way up for nearly ten years eventually settling into a post-supervisor position on several series; all the while working on side projects and doing artwork just for fun.

The major turning point happened in 2012. I decided to attend a meet-and-greet with my favorite band, In Flames near my office at the time. I had the bright idea to make some fan art for them because they’d been such a huge inspiration for me. I made the art, framed it and presented it to them. One of their management team, a great guy and now dear friend named Andreas Werling, saw the piece and gave me his card, asking if I’d like to do more art for them. At the time I thought he was just being nice but sure enough, he reached out about a week later. He essentially asked what I would like to do for the band.

I made a deal to create a comic book based on their music and lyrics. My writing partner, Scott Bramble, and I created the graphic novel called “the Jester’s Curse” which went over really well with the band and their fans. This led to me quitting television all together to focus solely on artwork. The experience was so inspiring I couldn’t go back to my desk job. I started creating my art and sure enough, some of it caught on and allowed me to live off my posters and print sales. And having had such a good creative relationship with the band and Andreas, I was asked to create the album art for their tenth record ‘Siren Charms’ and this was pretty much what broke my art career wide open. From that album I gained an international audience for my work and cemented a working relationship with In Flames that has lasted for nearly eight years, I’ve created the art for their last three records and even produced one of their music videos.

But to back up slightly, In the middle of the In Flames work, I found a specific love for making movie posters. I am obsessed with guys like Drew Struzan and John Alvin, so I emulated a lot of their work on my own (borrow from the best right?). This led to me making posters for some indie films and movies my friends had produced along the way. From that, my work was seen by a creative agency called BLT communications. They are one of the top dogs when it comes to movie and television Key art. I was asked to come on board as an art director and I’ve been there ever since. I get to work on some of the biggest movies for the biggest studios and work with literal legends in the industry that I love so much. It all came back around to movies and artwork. Right, where it started.

If there is anything to be gleaned from my experience, I would encourage everyone to unabashedly follow what you love and what you are good at. Being positive and outspoken about that love could land you in places you only dreamed about. It did for me.

If you had a friend visiting you, what are some of the local spots you’d want to take them around to?
One of my absolute favorite things to do in LA is visit filming locations — Pasadena is particularly rife with great movie houses and streets.

A perfect day LA would consist of a drive admiring all of these locations, visiting one of the studio tours and having brunch at BeaBeas in Burbank. And in the evening, see some art at the Getty and close the day out with dinner at Sugarfish or a trip to the Magic Castle.

Who else deserves some credit and recognition?
Big shoutout to my Mom and Dad. They taught me to work hard, be kind and above all, to be myself. Without them I can’t imagine where I would have ended up.