We had the good fortune of connecting with Bob Barry and we’ve shared our conversation below.

Hi Bob, why did you decide to pursue a creative path?
I have always felt that it was a case of the arts pursuing me! Many of my artist friends and I have discussed this and we almost all agree that it wasn’t so much that we wanted to be artists, but that we needed to be artists!

Something about the way we were wired left us with an almost desperate need to vent and share our feelings, and in most cases, words were just never enough.

So, we found outlets where we can express ourselves in many different ways, the visual arts, performing arts etc.

In my case, it began with the performing arts and the stage. Acting became my voice and outlet. Later, it was music, singing, and playing the guitar that allowed me to share my feelings with others.

Now, and for the last 25 years, it has been photography and specifically photographing musicians and vocalists.

Photography has been with me since I was eight years old when my father gave me my first camera. Photography opened a door for me then, and it has been with me ever since. It was little more than a hobby then, and now I am pleased to say that it has blossomed into another career and has given me yet another voice and path to once more speak up and share my feelings. 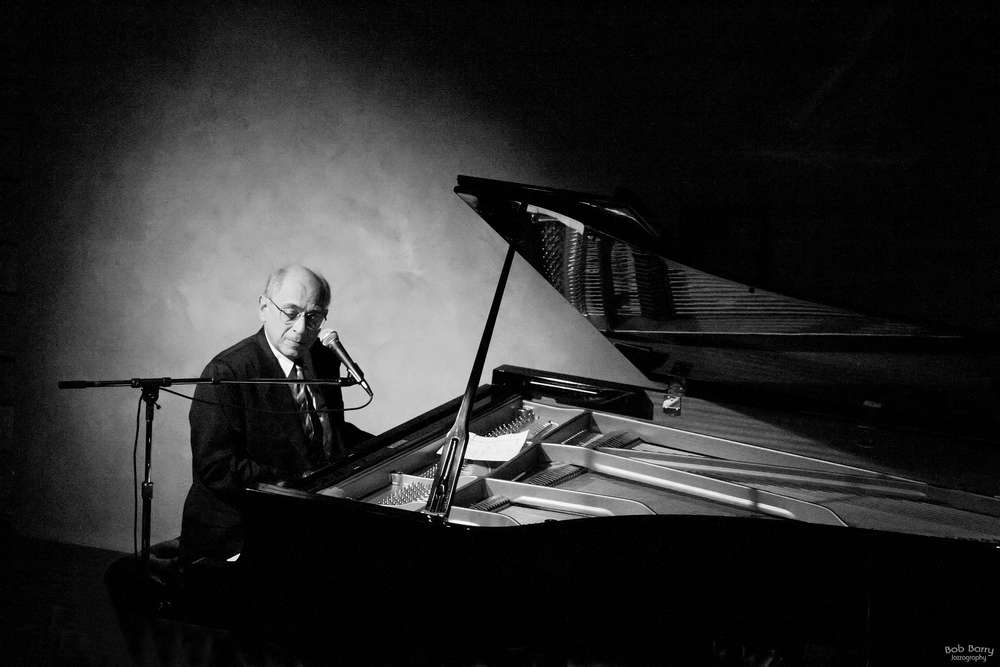 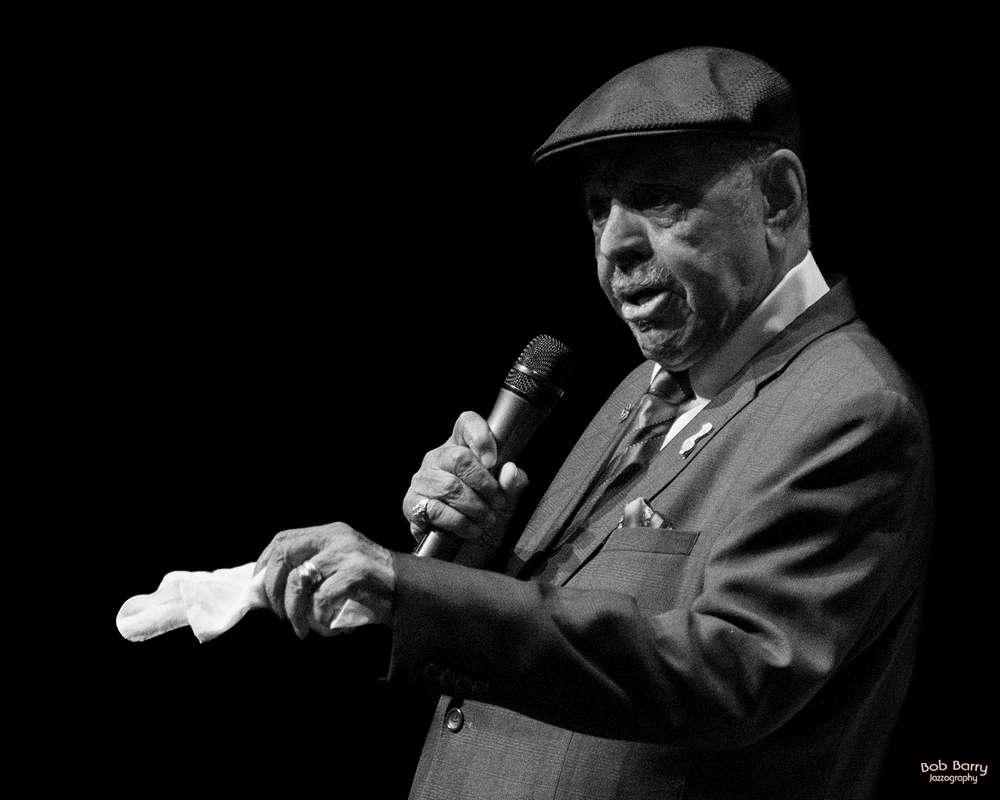 Can you open up a bit about your work and career? We’re big fans and we’d love for our community to learn more about your work.
My work can be broken down into two basic parts, the business of photography and the art. The similarities that these two outlets share are the skill sets. Aside from that, they can be worlds apart.

For me, the business was the hardest part to grasp, and I can say with all honesty that I am still not very good at it!

For all my work that was done as an actor, musician, and performer, I had agents or managers that took care of all the negotiations and business matters that I was not only ill equipped to handle, but it was the least enjoyable part for me.

As my career in the music industry gained speed, I found myself having to learn to negotiate contracts and letters of agreement.

There were helpful books on the subject, and there was even an app I was using at the very beginning that if you typed in the job description, and a little detail, it would give you a range of pricing for the work. This I found very useful!

Eventually, I was shooting individual artists and groups during performances and the venues ranged from local clubs, to recording studios and music festivals.

I never liked studio photography that much! I had a little studio set up in my home, but I much preferred shooting artists during performances in available light. It was infinitely more challenging to me and I felt the results were far more artistically rewarding!

My “Brand” as an artist if you will, is what my mentor and legendary jazz photographer, Ray Avery, called my “Performance Portraits.”

When I was “gigging” for the paycheck, I gave the client what they wanted; although sometimes I felt that they were doing themselves a great disservice by the choices they made.

I had to constantly remind myself that in these situations my opinion (no matter how right I thought I was) was irrelevant. If they liked it and the check cleared, I did my job!

My artwork isn’t as journalistic as many of my brother and sister jazz and music industry photographers.

I would probably be better classified as a portrait photographer who shoots during live performances and in available light.

I must say that it is not the easiest challenge I have undertaken, but then again, easy for me is just another way to say mediocre!

It takes great concentration and patience to wait for and to see the right moments when the lighting and the artist are blending together. The artist is always moving and the light is always changing. You almost have to predict where they are going and try to get there a little ahead or right with them. My background in performing and music has been a great asset to me in that regard.

I think I will call my next book “Performance Portraits” and it will be an eclectic collection of my work. 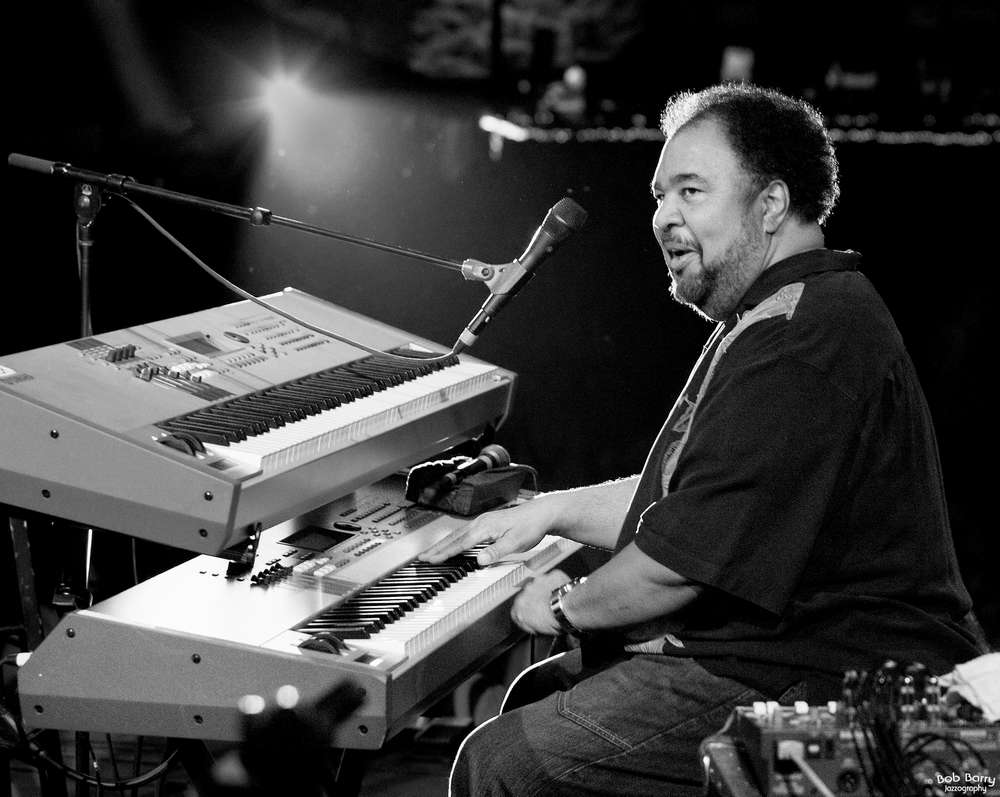 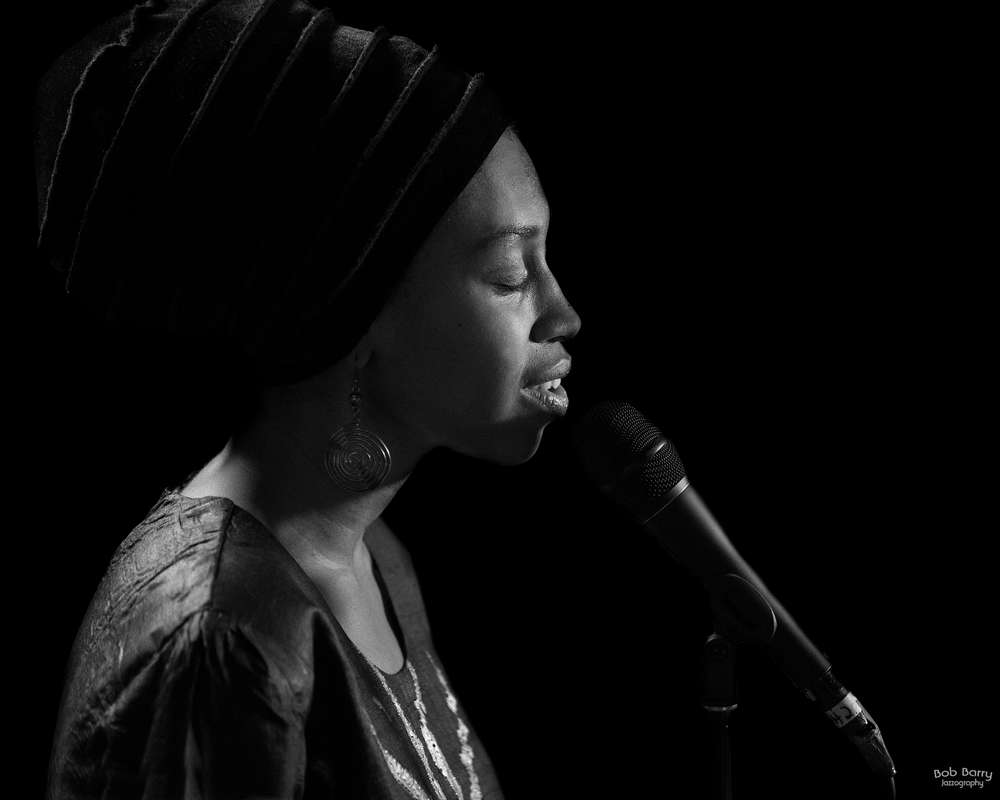 If you had a friend visiting you, what are some of the local spots you’d want to take them around to?
You are going to think that I am such a bore, but I don’t drink! For a man who spends most of his time in bars, clubs, and restaurants, it’s a bit strange, I suppose. I am addicted to my work. When my friends, who are mostly other photographers and artists of many medias, come to town from across the sea or country they usually want to go out shooting with me. Occasionally, I can get them into clubs, and recording studio sessions as my guests or assistants.

I am now the primary photographer for three musical events here in LA, (The Jazz Bakery, John Pisano’s Guitar Night, and the Just Jazz concert series at the Mr. Musichead Gallery) and I sometimes, when possible, take them with me to my gigs and they get to hang with the stars and even shoot a little bit.

When you work in food and drink environments, the last place you want to go is to another club or restaurant, so from time to time, I have house parties for my friends! I cook, they eat! Sometimes it’s other photographers or a mix of artists and friends sitting around telling stories and laughing till the sun comes up.

I feel very fortunate that my work is my passion and I never seem to get tired of it. 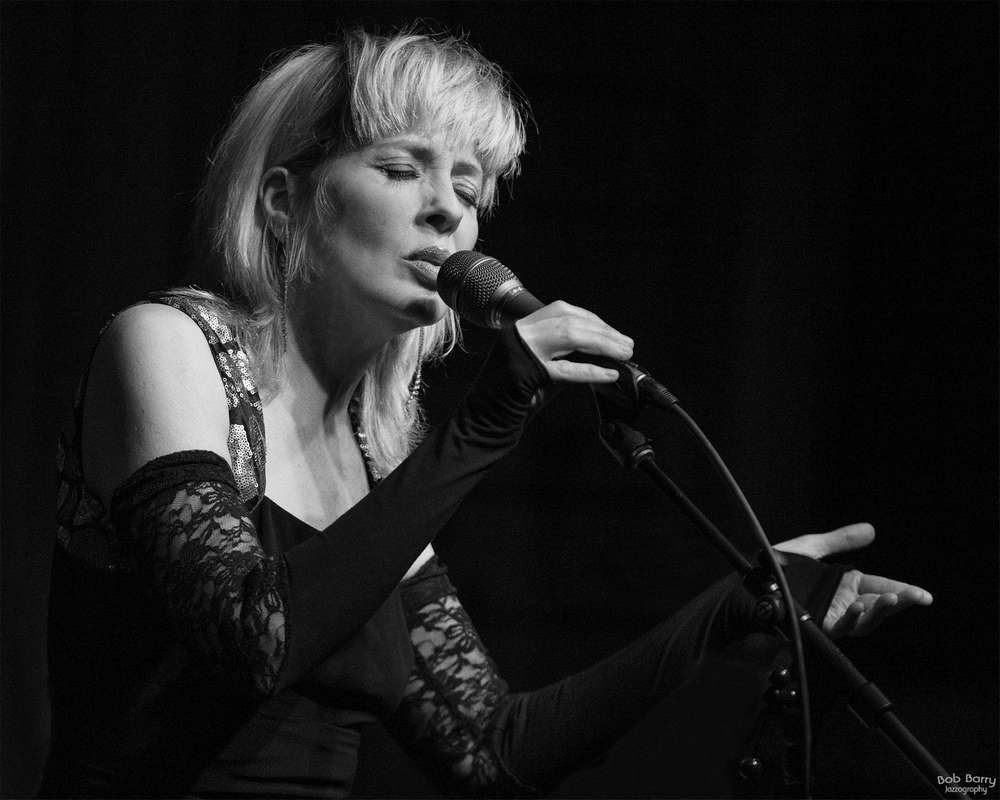 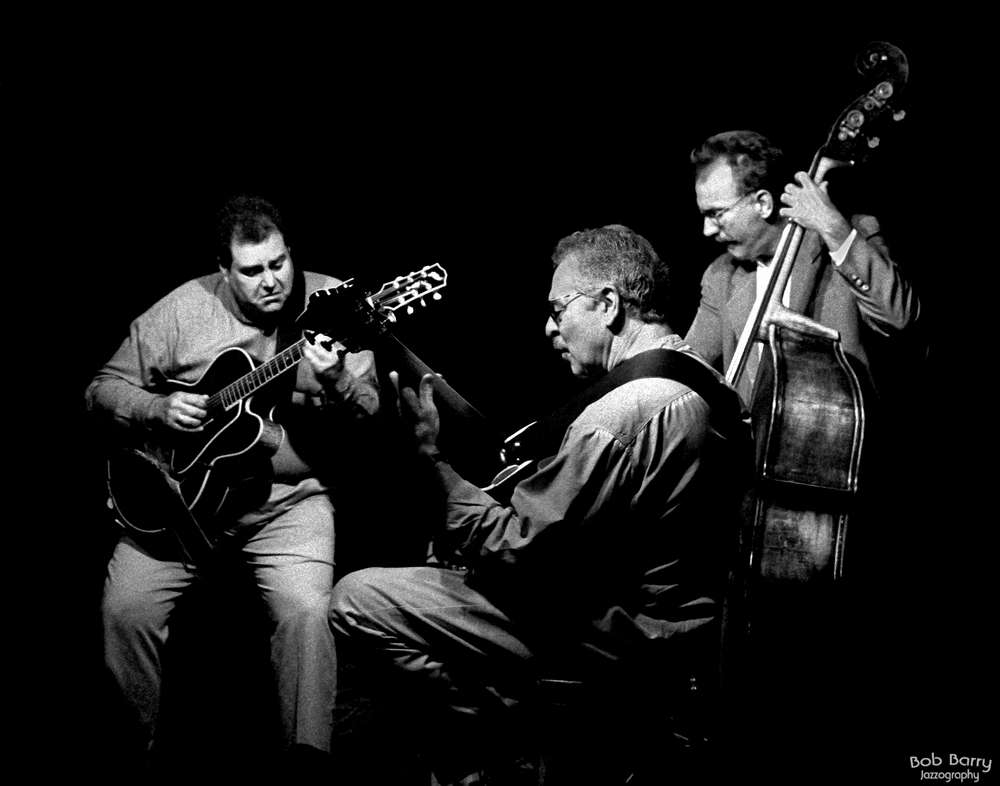 The Shoutout series is all about recognizing that our success and where we are in life is at least somewhat thanks to the efforts, support, mentorship, love and encouragement of others. So is there someone that you want to dedicate your shoutout to?
I have often felt that we only go as far as our friends take us! In regard to my career in jazz and art photography, I have two significant mentors that I would like to share with you.

The first is the late great jazz photographer Ray Avery.

Ray and I met very early in my career at a club and restaurant in Encino called Papashon. It was at this club that guitarist John Pisano hosted his first “Guitar Night”, where every week, on a Tuesday, he invited a world class guitarist to play with him.

I came that night to shoot the great guitarist Herb Ellis.

I always came a little early so I could check out the venue and lighting (if any!)

I was fiddling with the lighting when I noticed at a front table were sitting three of the most famous jazz photographers in the world, William Claxton, K. Abe’ (from Japan), and Ray Avery.

They had also come to hear and perhaps photograph Herb Ellis. I was so stunned that I actually tried to hide my camera under my sweater! Ray Avery came over and introduced himself to me and then to the others at the table.

From that night on, Ray was my mentor and got me started on the right path to further myself in my new field. His advice was priceless, and he went out of his way to help me understand that I shouldn’t expect things to come to soon or to easily. He gave me not only technical advice but prepared me for the disappointments that were waiting for me.

The bottom line was that he shared with me that, if I followed this path, it was going to be a “labor of love” and to keep my expectations low and my hopes high!

The second was the legendary guitarist John Pisano.

I had met John and his wife Jeanne through a musician friend I had at that time named Sandy Shire.

John had a brilliant career as a jazz guitarist playing with everyone from Benny Goodman to Joe Pass.

He was partners with Joe Pass in their quartet for over ten years. Before that John worked with Peggy Lee for ten years. He was also with Herb Alpert’s Tijuana Brass from beginning to end.

John gave me what was to become the greatest gift someone in my line of work could ever get, accessibility!

John, Jeanne, and I became close friends, and it was through John and his “Guitar Night” (once a week John would invite a great guitarist to play with him backed up by bass and drums in several venues over a 23-year span), and through my personal relationship with John, I was able to have access to some of the greatest musical artists of our time.

In 2018, I published my first book called “Guitar Night” which was a pictorial history of the first twenty years of John Pisano’s Guitar Night.

It is these two men that I owe a great deal of whatever success I have had over these last 25 years, Ray is gone now, but John, who just celebrated his 90th birthday, and I talk quite often. 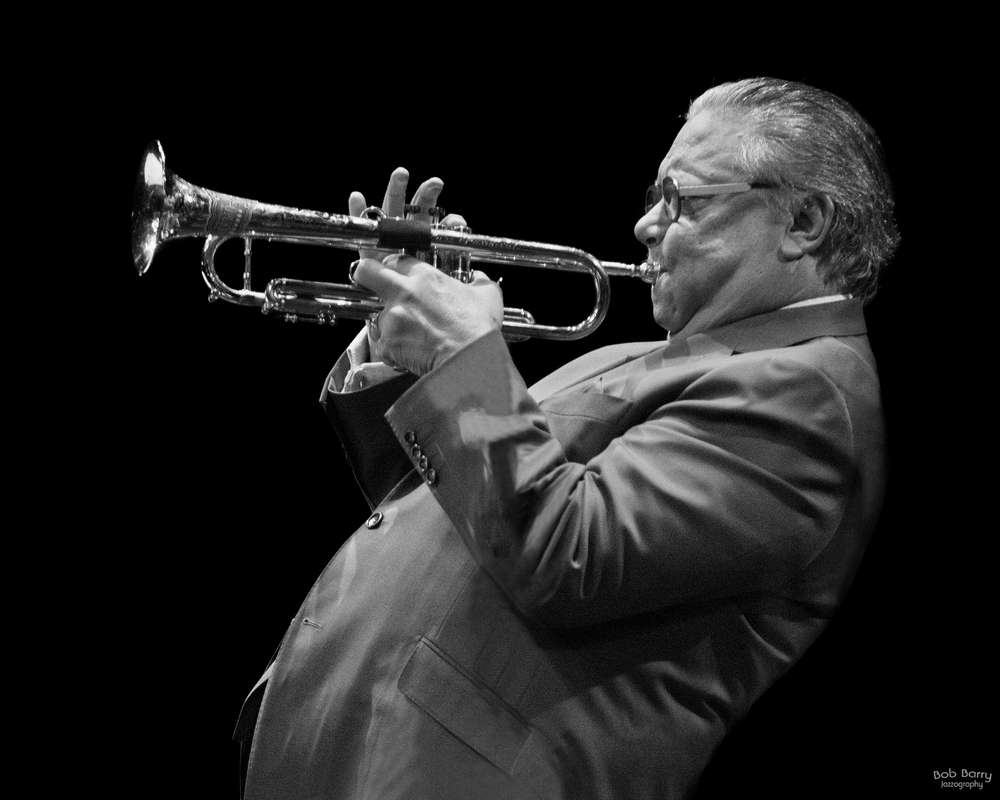