We had the good fortune of connecting with Daniel J. Stimac and we’ve shared our conversation below.

Hi Daniel, how do you think about risk?
I feel like the biggest risk I’ve taken yet has been to start this business in the first place — to choose music for film and media as a career.

We’ve all heard that there’s always risk in starting your own business. And before deciding to pursue a career in film scoring, I heard that it’s one of the riskiest and most difficult careers to pursue…especially right now, as the industry is flooded with many young composers who are willing to work for next to nothing (or sometimes nothing) because they are desperate to be the next John Williams or Hans Zimmer.

Being a composer is more than a full-time job. There’s not only a lot of time involved in writing and orchestrating music, but in finding jobs, finding people you’d like to collaborate with, and building lasting relationships with them. Then there’s the business side of things — taking care of the paperwork, hiring musicians and other contractors, bills, contracts and agreements, etc. The actual “making music” part is probably 20% of my work. There’s a lot involved.

Then there’s the emotional side of risk-taking in this business. For an artist, putting yourself out there isn’t always the easiest thing, because your work is many times an extension of your heart, emotions, and who you are. I know artists who prefer to keep their work to themselves or to just their family/friends circle. When you make music professionally, you have to put these insecurities aside. You are constantly pitching your work to people…your music is always in front of others, subject to their criticism and scrutiny. You’re risking rejection every time you pitch for a new film or placement or project. And when you’re on a project, there are times you have to lay down your opinion to help to tell the story in the way the director/producer envision it.

But there’s nothing like collaborating to produce a great film and tell a great story, and getting to work with my talented friends (musicians or other composers) on some projects, and that makes taking these risks worth it for me.

I recently listened to a Ted Talk of Brene Brown speaking about risk and vulnerability. She shared a quote from Theodore Roosevelt that really touched me:

“It is not the critic who counts; not the man who points out how the strong man stumbles, or where the doer of deeds could have done them better. The credit belongs to the man who is actually in the arena, whose face is marred by dust and sweat and blood; who strives valiantly; who errs, who comes short again and again, because there is no effort without error and shortcoming; but who does actually strive to do the deeds; who knows great enthusiasms, the great devotions; who spends himself in a worthy cause; who at the best knows in the end the triumph of high achievement, and who at the worst, if he fails, at least fails while daring greatly, so that his place shall never be with those cold and timid souls who neither know victory nor defeat.”

Sure, a composer’s face is not generally marred by dust and sweat and blood, but you get the idea…it’s still a lot of hard work and takes a while to find your way.  Yes, I may fail, and that is the risk I still take every day, but either way, I will continue to dare greatly.

My wife and I started Bella Notte Productions right after we got married. We’ve had some success in writing songs together (as she’s a talented lyricist). One of our songs, which she co-wrote lyrics on, was nominated for a Canadian Screen Award in 2017. It’s on a film which I also scored, called “A Date With Miss Fortune.”

But going back further – I grew up playing music in my hometown, Kona Hawaii, where there is no film music scene, then working in music studios in Amsterdam and Turkey before moving to L.A. That was before I had done anything for film. When I moved to L.A. I started working for a film-score mixer, and that was where I got my feet wet. Invaluable experience, by the way!

Scoring my first film, which my brother wrote and directed, was a big step in becoming a composer. They say “It’s all who you know” in this industry. And it really is. Thankfully, I have a brother who’s a film maker, and this created an easy opportunity to score my first feature film. Since then, I’ve met more people and scored their films or projects (including video games).  I’ve also become good friends with so many talented composers & musicians over the years. As I mentioned earlier, I love when I can bring them on to projects I’m scoring. One of my goals in becoming a more successful composer is to be able to build a team, so we can always work together.

What do I want the world to know about me or my brand and story? The important thing here, really, is my relationships with the people I get to collaborate with – both filmmakers & video game developers who hire me, and also the team of people I get to work with. There are a ton of people in the world that can make great music…and probably a ton of them are way better musicians than me. But I want to be a great person to work with, who honors and loves the people I work with…and yeah, sure, who gives my clients the “right” music for their project. 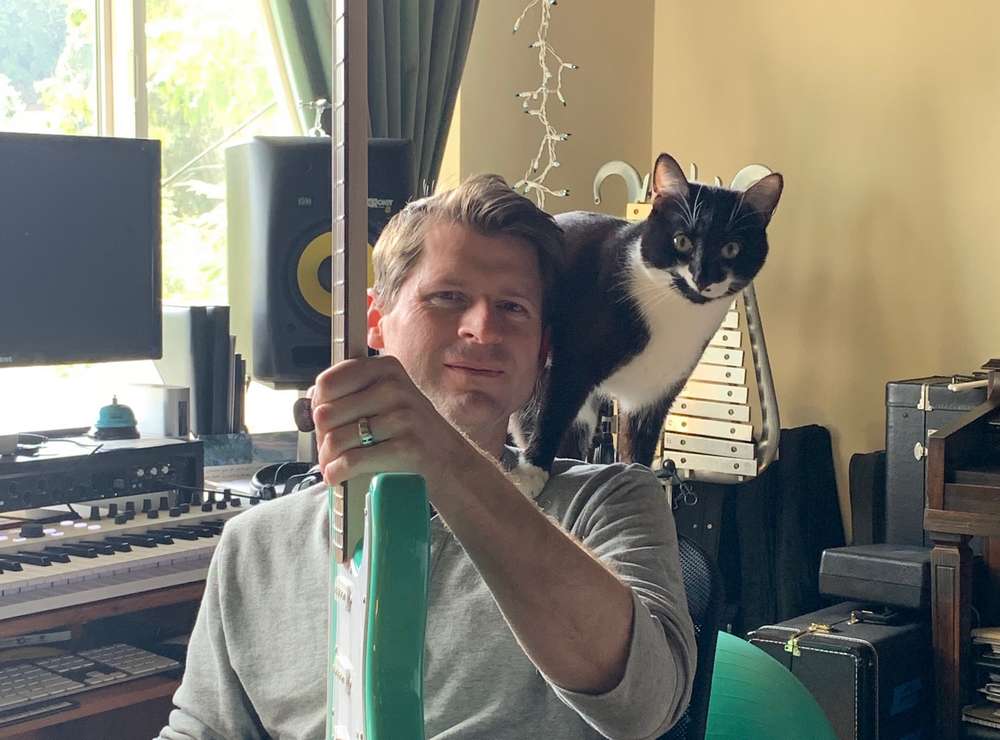 If you had a friend visiting you, what are some of the local spots you’d want to take them around to?
Well, I’d want to take them to see Hollywood/Highland and the Hollywood and Sunset Strip if they’ve never seen it before. Probably not a bad idea to eat at Mel’s Diner, and Shake Shack, possibly on the same day, ’cause who doesn’t want more burgers and shakes?!

I’m a Disney fan, so I might take them down to Anaheim area for Disneyland/California Adventures.

I’m also a fan of “quiet” and having space, so I’d take them to Huntington Botanical Gardens…and possibly get In-N-Out on the way, since it’s something you have to at least try if you visit here.

The Hollywood Bowl is one of our favorite places to go here…there’s nothing like listening to one of the best orchestras perform the best movie music of all time, all in the beautiful open-air amphitheater that seats close to 20,000 people!

There’s also a heck of a lot of good sushi, food trucks, and fine cuisine around…from Sushi House, to Chinois on Main, to Teya Thai, to Vitello’s, to the Bollywood Café.

Shoutout is all about shouting out others who you feel deserve additional recognition and exposure. Who would you like to shoutout?
I’d love to dedicate this Shoutout to my parents, Ray and Sharon Stimac. My mom just passed away in August 2020, and was probably my biggest supporter (along with my dad) throughout the years. My parents gave me an ukulele to play around on pretty much as I was starting to walk, and they put me in ukulele and piano lessons from the age of 4 and onward. I’m so grateful for their encouragement over the years.

I’m also incredibly grateful to my wife, and that she’s supported me in this career even thought it’s not the easiest road. She encouraged me to go back to school (UCLA Extension) to study Film Scoring. She was so supportive while I was back in school, while I was spread even thinner than normal.

I’m grateful to all of my professors at UCLA, who taught me numerous invaluable lessons.

I’m so thankful for Al Clay, my first boss and mentor in the industry, who taught me a whole lot.

And I’m grateful to Michael & Kevin (and Iconic), who have been so supportive and were so flexible with me as I was working with them and also building my music career.