We had the good fortune of connecting with David P. Kronmiller and Jennifer Emily McLean and we’ve shared our conversation below.

Hi David & Jennifer, have you ever found yourself in a spot where you had to decide whether to give up or keep going? How did you make the choice?

JENNIFER: I honestly don’t think it’s possible for us to “give up”. That somehow implies that there’s a choice. This is our way of life. We came home early from our honeymoon to rehearse a play we were producing. When we both lost our day jobs in the 2008 financial collapse, we made 3 seasons of a web series (and Boris) with a $200 gift certificate to Home Depot and a borrowed camera. When the pandemic hit, within 3 weeks we were doing a live Zoom sitcom (Wicked Widgets) despite moving David’s mother cross country during the first 2 weeks of the shutdown.

The world shut down on March 16 and out the window went all our plans and expectations about what we would be able to accomplish for the year. By April 5th we went live with the first episode of Wicked Widgets: Apocalypse Edition. It’s a zany cartoonish sitcom we performed live on Facebook about a magical IT company that accidentally deletes the internet during the pandemic. We poured into it all our fears and frustrations of the moment. I always joke that our trauma response is to make a webseries.

We don’t know how to not do this. Have there been fallow years, of course. Are there times I wish we had more “normal” predictable lives, absolutely. But the predictable path has no more guarantees than the one we’re on so my mantra has always been to bet on myself and not my fear.

DAVID: In the beginning it’s hard to know whether to throw in the towel or dry yourself off and start again. But if you are following your passion I feel it’s nearly impossible to give up. It’s something engrained in Jen and I to keep moving forward. Everything we’ve done at some point hit a roadblock but we didn’t stop. When we made our feature comedy “Boris and the Bomb” it was after another version of it fell through and an actress dropped out. When the pandemic hit we had just been in talks with Flappers Comedy Club in Burbank to produce a narrative comedic webseries about the club’s history but we quickly pivoted to shooting the documentary Un-Flappable to cover how Flappers was reinventing itself. In fact that story is all about Flappers not giving up. So I guess we tell stories about people who don’t give up. 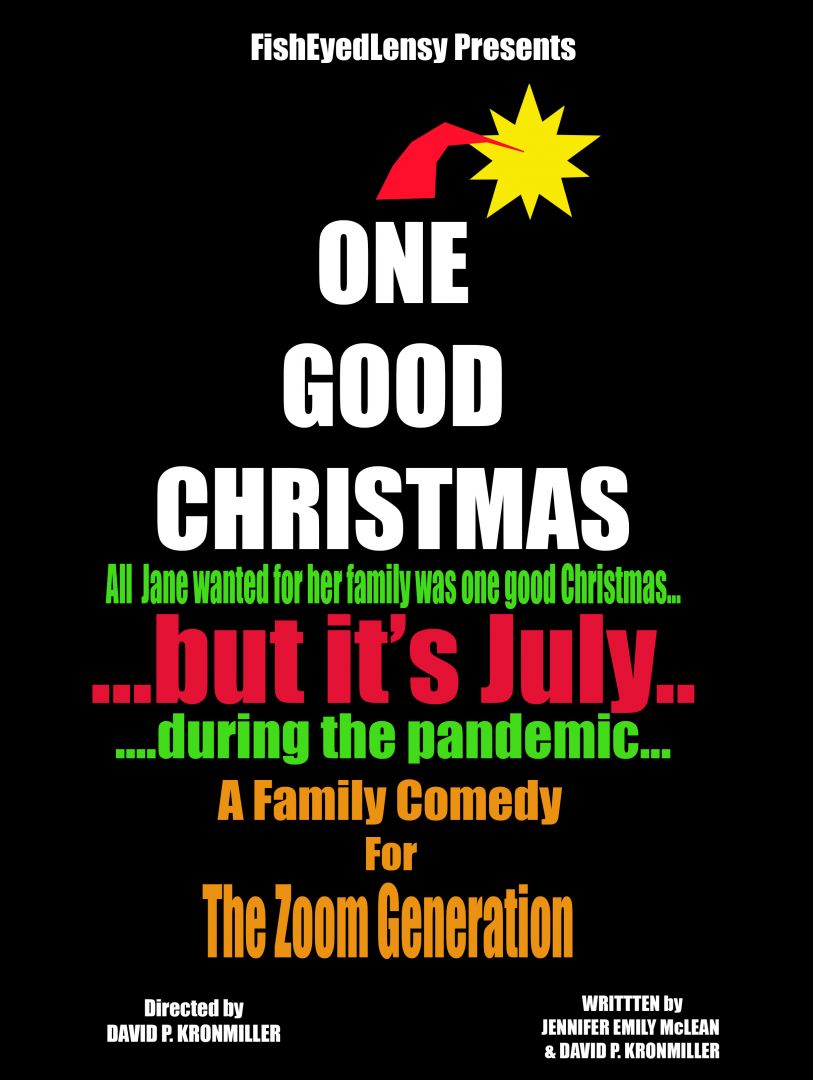 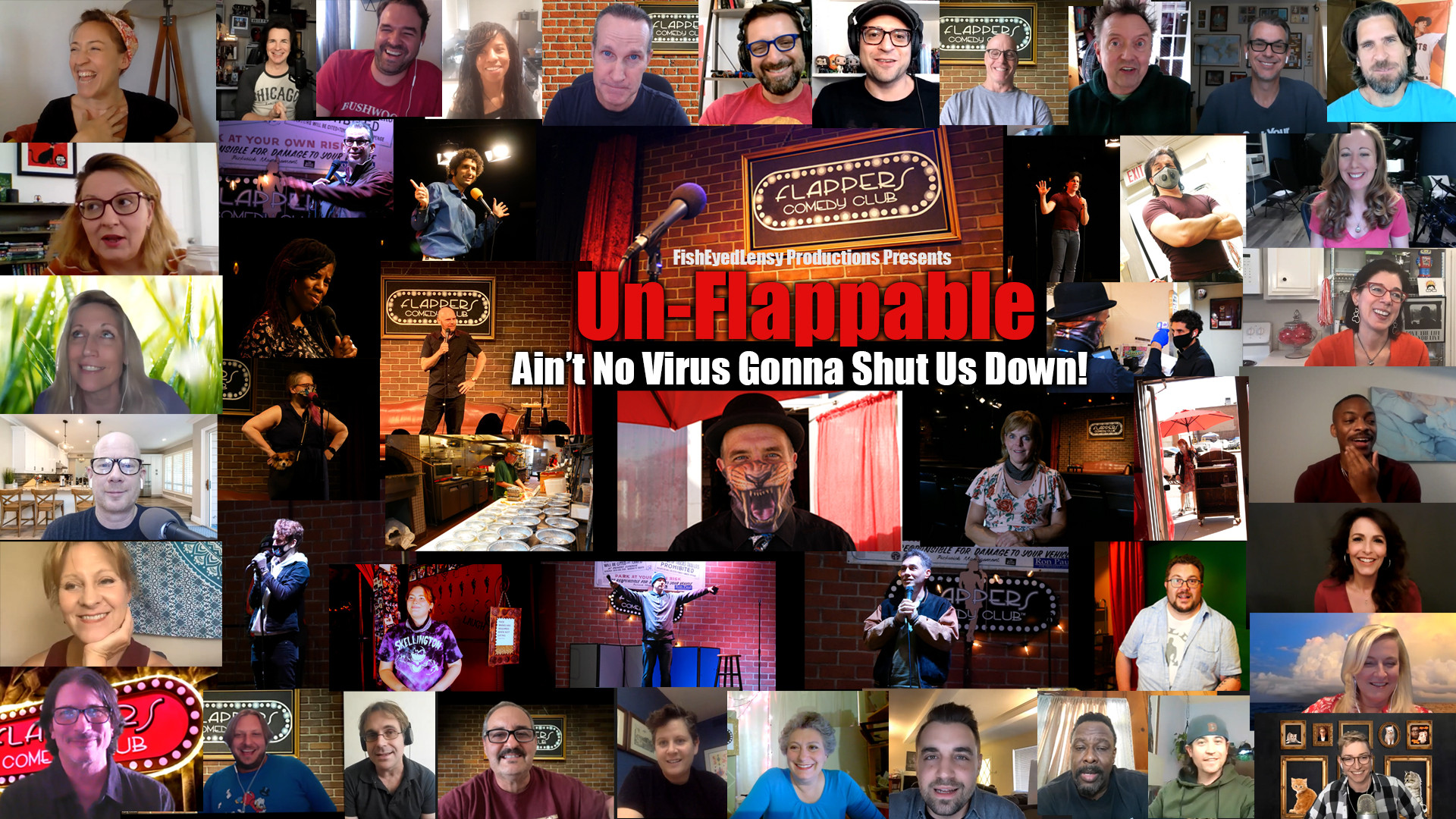 Alright, so let’s move onto what keeps you busy professionally?
JENNIFER: Our company is called FISHEYEDLENSY because we believe we have a different way of looking at things. We both have brains that see the world with a bit of a tilt. I am most proud, and this is a testament to David never giving up, that we finished our first feature and got it out there in the world. It took years of working everyday with no guarantee of a return. None of it was easy, at the same time, things also tended to line up or work out in the end. Whenever something went wrong on Boris, it always, always, ended up turning out better than originally intended. So I’ve learned to trust the process a bit. We always end up having what we need even if it’s from a completely unanticipated source. The hardest part has been learning not to get so distracted chasing the short term, we forget to plant and water seeds for the long term.
I want people to know that we are a company made of people with incredible hearts and creativity. That we have dedicated our lives to becoming the best storytellers we can be. I used to do Floortime Therapy with kids with special needs and the cornerstone of that work are the social emotional milestones. The first milestone is shared attention. Two people in the same moment together having a shared experience. Ideally, the foundation of all relationships is shared pleasurable attention (unpleasurable cements relationships too but comes with lots of trauma). My goal with all we do is to create shared pleasurable experiences for our audience, to allow a conduit to common language and common understanding. It’s why we gravitate to comedy and will likely never see a straight up drama on our slate. We want to create a fun experience that, at the very least, provided you relief from the stresses of your day and at best helped you to see something in a new way and created the foundation for more positive relationships based on a shared experience.

DAVID: Jen and I always put as much of our own lives into our films and projects. Boris and the Bomb is partially about our childhoods as told through a silly spy caper that was about a nuke but also about questioning the idea of a nuclear family. Wicked Widgets was a way for us to cope during the pandemic and we threw everything we were feeling and fearing into the farce along with a healthy dose of my experiences working in the IT world. And the movie we’re writing now, “One Good Christmas” is nearly autobigraphical with the exception that we haven’t met Santa in person…yet. All of them have in common an optimism as told through a lens that’s, yeah, a bit tilted. I’m most proud though of showing our daughter how not to give up – how to finish and how to do so by putting as much of our selves into what we do.

If you had a friend visiting you, what are some of the local spots you’d want to take them around to?
JENNIFER: The Santa Monica Pier has a special place in my heart. My grandparents lived in a mobile home park in the Palisades. I remember when it just had a merry-go-round and now there is a full on amusement park and restaurants there. It may be touristy, but it’s always been one of my favorite places to be.

If my friends had small children, I would recommend Noah’s Ark at the Skirball. It’s a children’s museum set up as “the ark” with hundreds of “animals” made out of recycled materials. The artistry is incredible and littles have a blast with all the interactive activities. The Skirball also has an entire art workshop (free) that allows kids to explore art using recycled materials. The whole theme is about second chances and giving both items and people a second chance at life.

DAVID: Of course the pandemic has made the most exciting place in the city be our couch and whatever is streaming on our television at home. However the Grand Central Market. Amazing. The Botanical Gardens became one of the few places during the shutdown I could go with my daughter safely. And Alissa’s Oceanview Bar and Grill in Montrose has a fantastic brunch. And of course Flappers Comedy Club in Burbank has some of the best food in the valley not to mention folks like Jerry Seinfeld, Bill Burr, Whitney Cummings and Kevin Hart drop in to perform weekly. 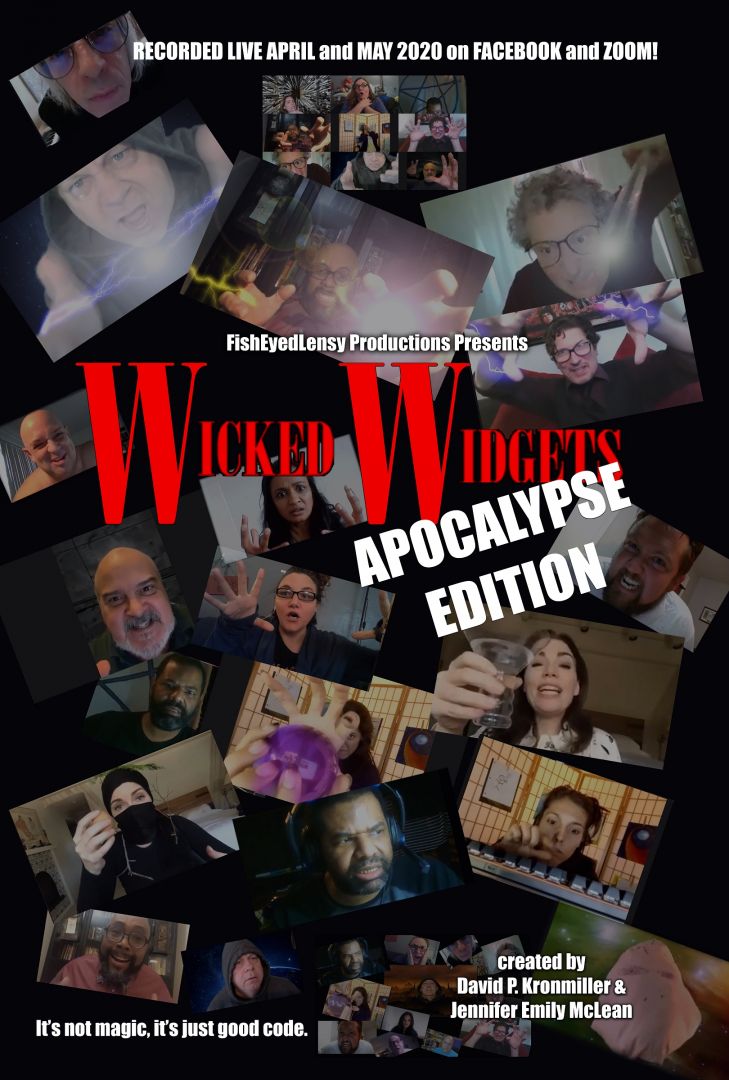 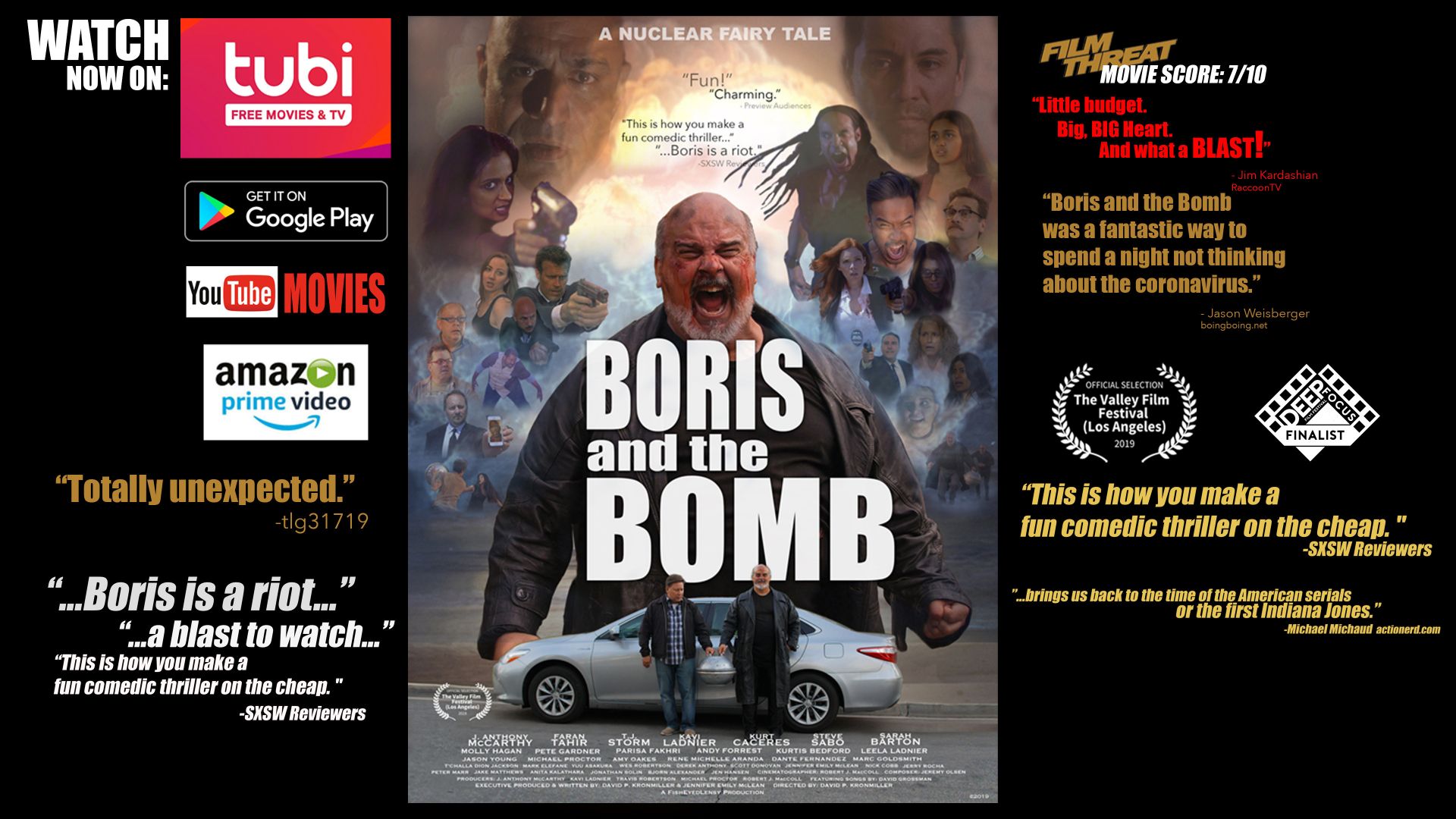 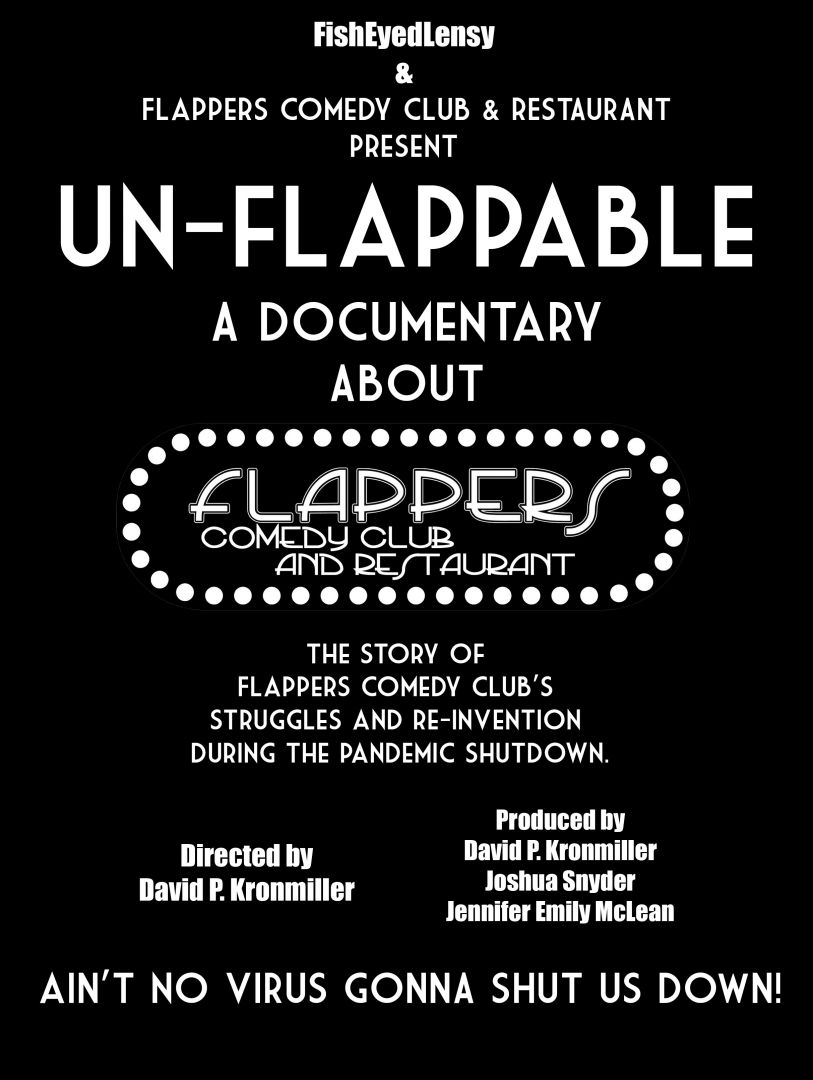 Shoutout is all about shouting out others who you feel deserve additional recognition and exposure. Who would you like to shoutout?
JENNIFER: There are two women who have truly championed and supported us professionally. Tracey Adlai of Valley Film Fest and Barbara Holiday co-owner of Flapper’s Comedy Club. Barbara Holiday worked with us to have a premiere cast/crew screening of our feature, Boris and the Bomb, at her Burbank comedy club Tracey gave our film it’s first official festival “yes” and fought to include us in it and has been 100 percent supportive from the beginning in helping our film find a path to success and get distribution. Both women have been such great role models to me as successful business women who are also so kind and supportive, the opposite of the Hollywood shark tank you expect. We continue to have great working relationships with both and now consider both dear friends. We are screeners for Valley Film Fest and we are producing a documentary with Barb about the shut down of the club during the pandemic called “Un-Flappable”.

DAVID: I’d also have to give a shoutout to J. Anthony McCarthy who plays Boris in our feature and webseries and is also Harry Keller in Wicked Widgets. Tony has been there alongside Jen and I the entire time, supporting our insanity and making it better. Tony is a gifted actor and an amazing friend. Joshua Snyder and Dave Rienitz at Flappers also have been a big part of my life, inspiring me as a stand-up comedian and supporting the creation of the documentary “Un-Flappable”. I’ve learned so much from them as I’ve made the doc especially and I’m forever grateful for their friendship and wisdom. Dave and Flappers also do the FEMA funded Great Plates program feeding seniors here 3 meals a day in Burbank and one of those seniors is my mother – so very grateful. And of course my cinematographer from Boris and the Bomb, Bob MacColl who has been a lifeline of advice as I’ve shot “Un-Flappable” on my own.