We had the good fortune of connecting with Jordan Webb and we’ve shared our conversation below.

Hi Jordan, what role has risk played in your life or career?
Thinking about risk at this point has almost become second nature to me. More often than not the risks that I’ve taken, and am willing to take, are consistently rooted around my ambition to make the best music I possibly can and reach as many people as possible through the emotions & thoughts my music evokes. When I was younger, I learned to view risks as a chance to shake life up in exciting ways, consequences be damned. This mostly came as a result of growing up in a small-minded Nashville community and speaking to many adults who seemed to casually brush off the fact they gave up on their own dreams for normalcy and comfort, which was definitely not the wave I ever planned to follow. However, I had to hear this perspective constantly and was even told by my own mom at the time that I was “allowed to study anything in college except music”. Viewing risk as this sort of life catalyst helped motivate me to embed certain risks in decisions I made at the time. One of the largest of those risks being my decision to leverage my college career as a kind of back door into the music industry.
Fast forward a few years later and I’m on the precipice of dropping out of college mid-Junior year at Belmont University in Nashville. After tons of studio sessions and performing at plenty of house parties and DIY shows, I started to notice that every time my music career was picking up, college work was boldly and loudly standing in the way of whatever I needed to get done musically. It was at that moment of realization I decided to take the huge risk of dropping out. This was the second major life risk that I had almost no support on (though, to be fair, the one from earlier was not something I was openly broadcasting at the time), but I felt in my bones that if I did not take the risk, I would forever regret it.
If we skip about six years from that moment (for time and length’s sake), you’ll find me right here in Los Angeles, building out more musical works and expanding into adjacent entertainment endeavors. Without going too heavily into detail, within those six years after dropping out lies the bulk of my growth, expansion and how I ultimately grew comfortable with risk. During that time I was homeless, worked and lost several jobs for various reasons, performed all over the South & East coast, recorded and released three EPs, formed a rap duo with one of my best friends, moved to the Bay for a new day job, almost sued that new day job for some racist bs, made my way to LA, joined a new art collective (love to the FourthEyeTribe family) and have made an insane amount of music, friends and musical acquaintances along the way.
Looking back over the last 10 years, I feel extremely grateful and excited by the consistent steps forward I’ve been afforded by using risk as a life catalyst (sorry, bad pun I know lol). While my risks these days may involve a bit more planning and preparation, I still find these moments of instant risk that end up having huge life payoffs. This has only entrenched me deeper in my belief that the catalyzing effects of taking risk still very much ring true. I mean, after all, what is a leap of faith without any faith? 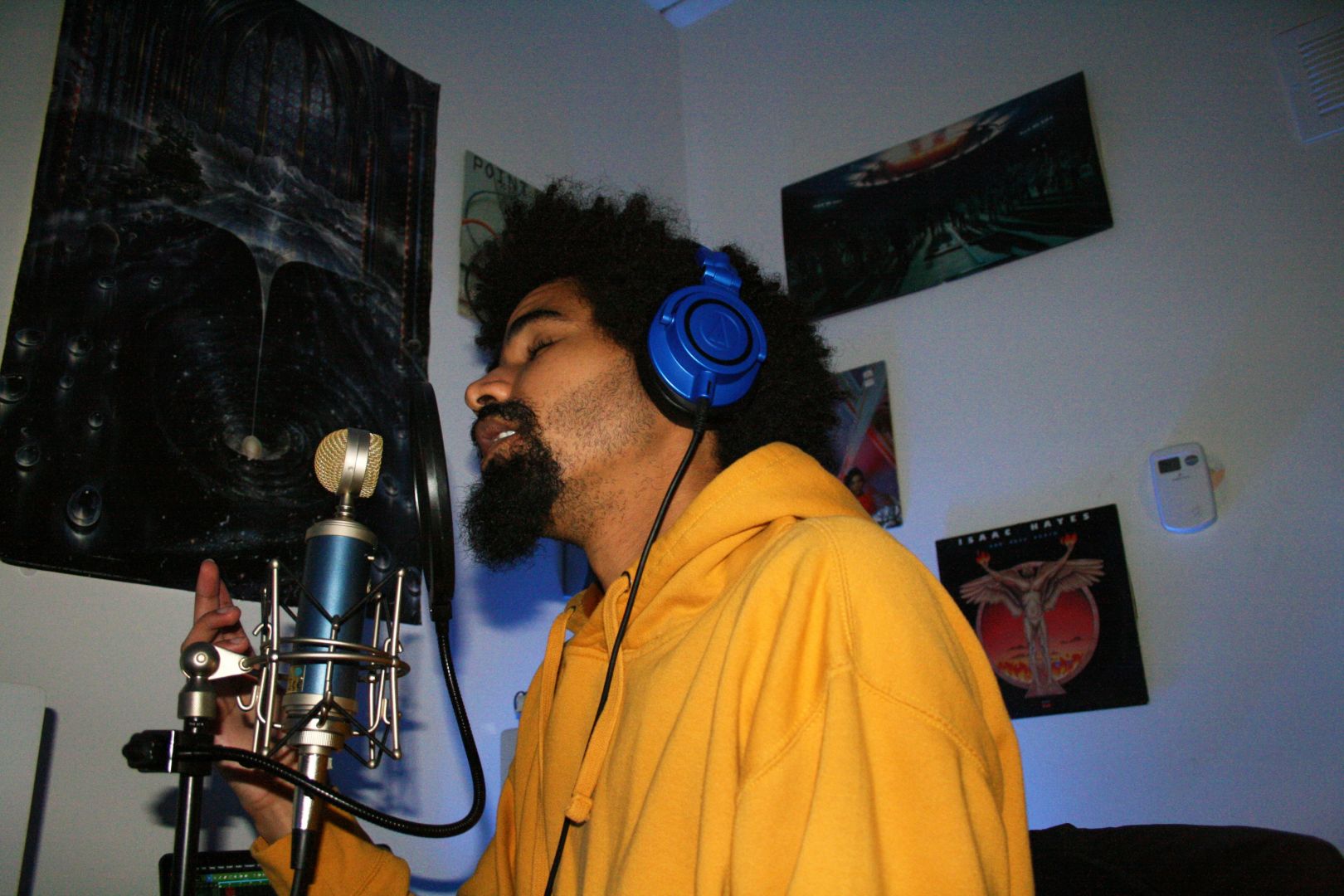 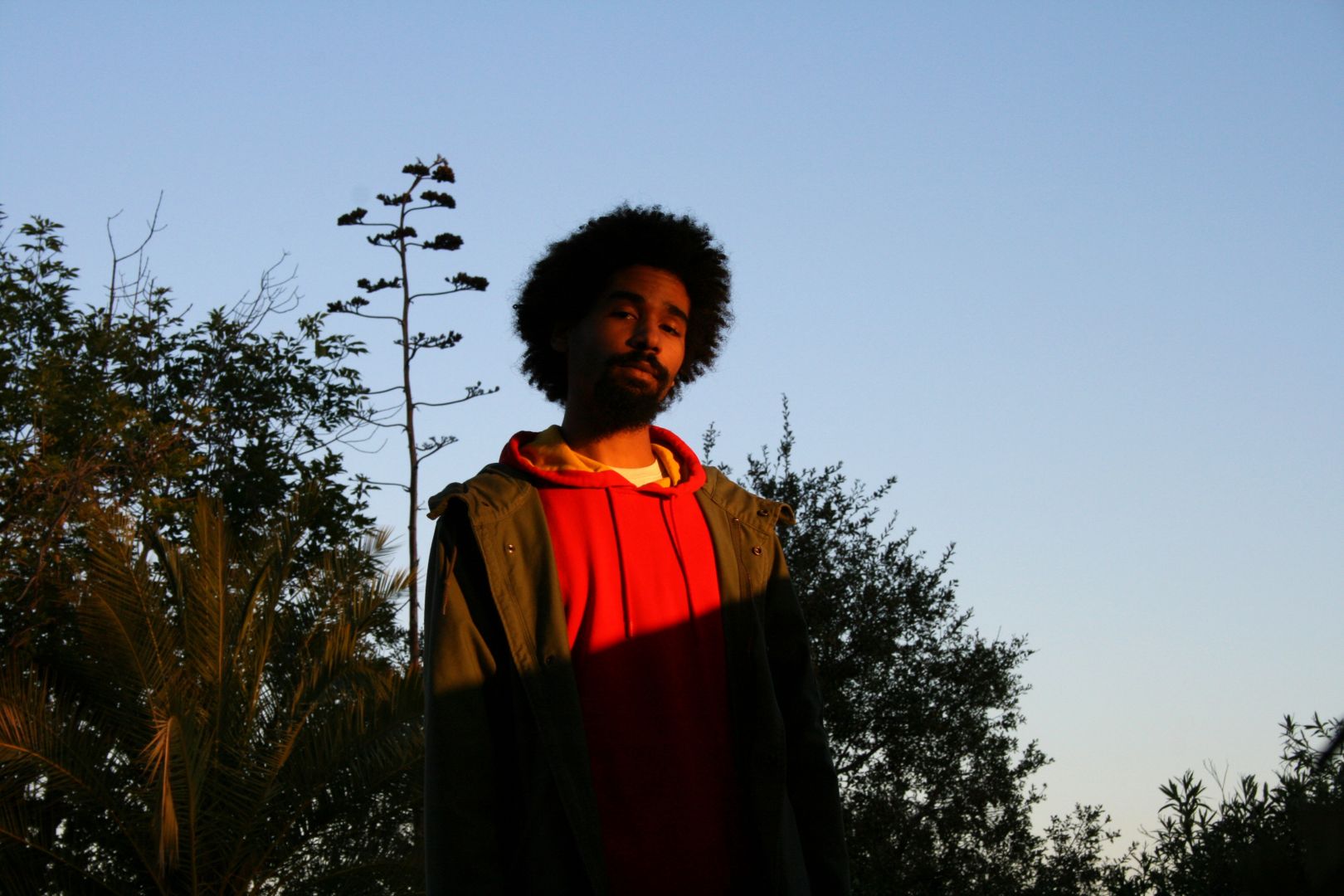 Alright, so let’s move onto what keeps you busy professionally?
Since moving to LA, I’ve been focusing mostly on refining my roll out process for projects and EPs, as well as building up my back catalog of records for both my own releases and songwriting placements. Thankfully, I’ve got a copious amount of experience from developing myself artistically in Nashville, which makes dealing with everything from amazing in-the-moment opportunities to insane project delays feel a lot less chaotic. I often utilize the chaotic nature of life and its on-call type of time to make content that reflects the music I am making or about to roll out. I feel like this gives me more breathing room when it comes to deciding which parts of myself I allow to become a part of my artistic brand, while simultaneously giving me the space to be a person as much as I can to fuel the musical inspiration tanks when they start to run low.

My squad, FourthEyeTribe, has also been playing an integral role in my music career. Whether it’s us meeting to record a new song, format project ideas, discuss content strategies, shoot music videos, or even just kick it and play Apex, we’re always seeking to push each other to new heights of creativity and community. FourthEye has also been pretty amazing in assisting me with developing my sound to the next level.

My sound is best described as retrofuturistic. To put it simply: my music is a smooth blend of relatable lyrics, bouncy flows and soulful beats. Since establishing this sound, I’ve been able to explore a more thorough, dynamic scope of topics over instrumentation that almost speaks the same message. I could spend more time giving examples or details, but I would say the best way to understand what it is is by listening to my latest release, Two Peace. This EP was designed as an introduction to my sound and also features some amazing artists from Nashville that I’m betting you’ve never heard of!

If you had a friend visiting you, what are some of the local spots you’d want to take them around to?
Truthfully, since I moved here mid-panoramic, I haven’t gotten to fully see what LA has to offer so don’t judge my picks too, too critically lol. The itinerary would be as follows: – first things first: we have to hit PAC LA in NoHo for some of LA’s finest, most affordable dispensary flower
– a windy Mulholland drive to the beach, starting with El Matador beach
– a lil Melrose shop and stroll, I really dig walking down Melrose and finding random clothes or nostalgic items, especially when they’re on sale
– definitely would have to take them to Runyon Canyon for some hikes. Though, it might have to be more than once because I know none of my friends are ready for that real incline haha
– hella studio sessions at my apartment or homies’ apartments (this is pretty much a staple in every visit for any of my friends)
– as far as food goes, we’d have to hit Home Restaurant, Country Style Jamaican Restaurant, and, since I’m a caffeine addict, Undergrind for some fiiiiire, Black owned coffee 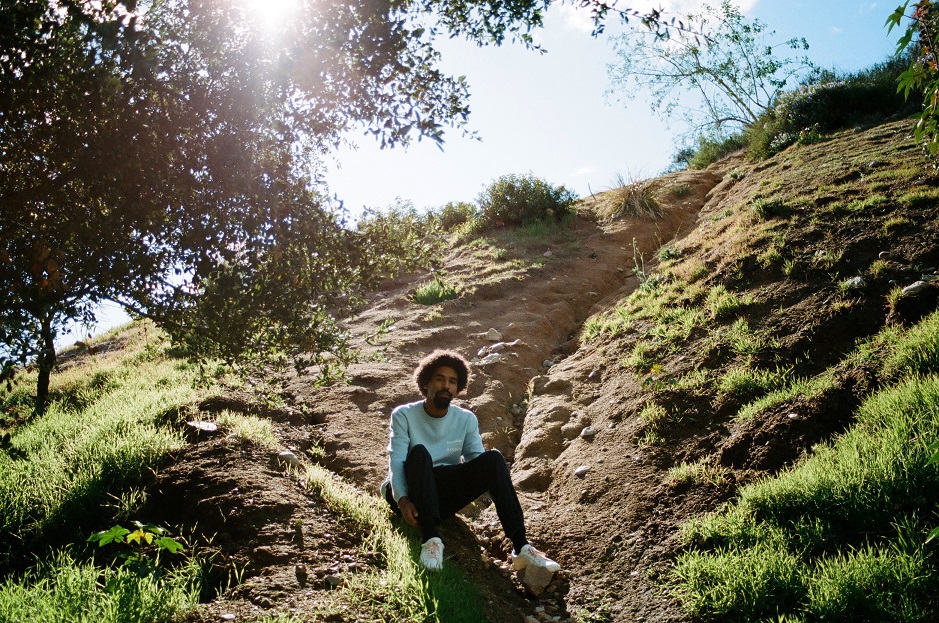 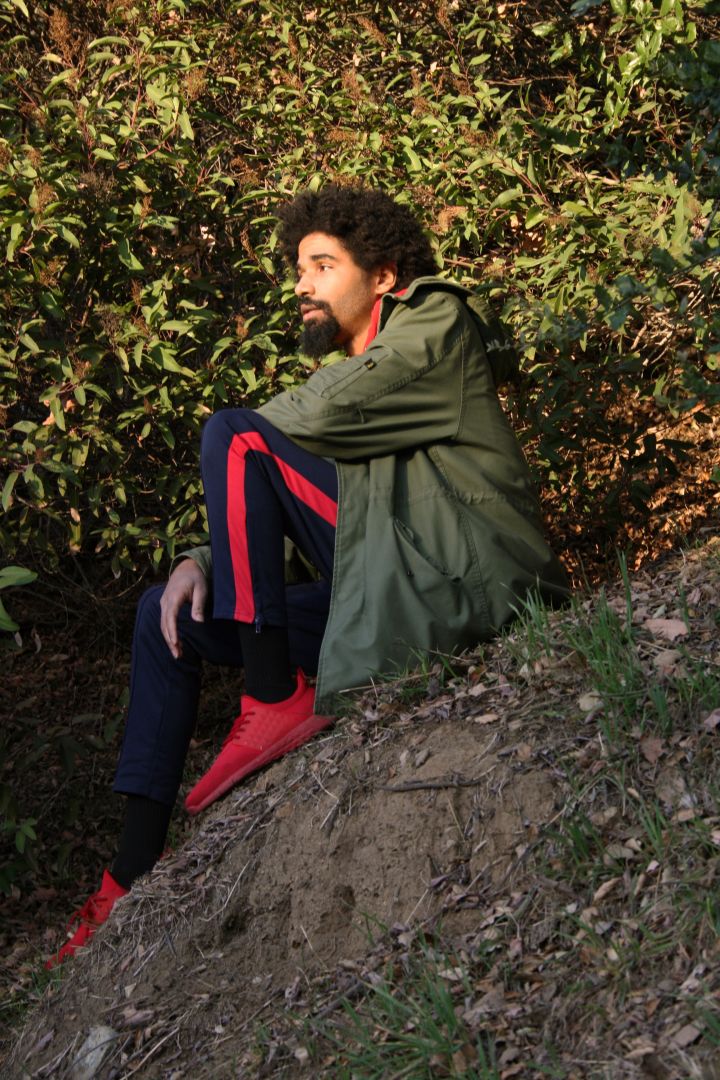 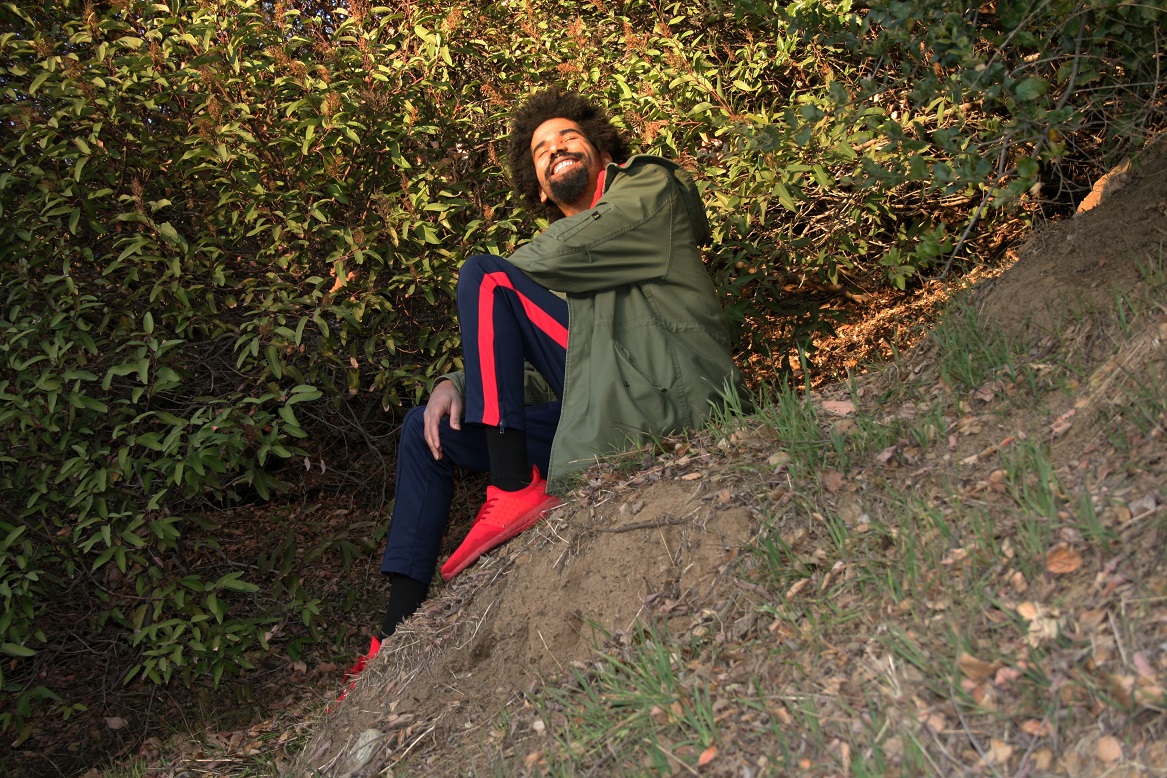 I have to split my shoutout between what I’d consider my ‘Home’ and ‘Away’ teams for this music thing. For my Home team shoutouts I am sending love & flowers to these incredible people who’ve held me down since pretty much first meeting me in LA: much love to the whole FourthEyeTribe out here! Much love to Addi, Nick Bison, Love, K-Wicks, ProLific, Kadren, Rated R, Sly Watts, RJB, Daylight & Wavy Josef!! Yall have made my transition out to LA a smooth one and are a constant inspiration to both the day-to-day work and my music. Thank you all for your contributions to the work, community, time and love!

As for the Away team, it really doesn’t get much better than the folks who’ve held me down since my Nashville days so shoutout to Namir Blade, Tank Andrew, Spellwrks, Josh Jauregui, Jack Eller, my OGs PETTY & Lit, Auntie Jo, Gee Slab, Case Arnold, OGthaGawd and my extended family Brian Brown. You all made my time in Nashville truly extraordinary, helped me get through myriad obstacles (internal and external), held me down in more ways than I can count and I can honestly say that without meeting you all, I would not be the artist I am today by any stretch of the word.

I’d like to wrap up my shoutout section with a special shoutout to a few folks who have placed their faith in me and my work off the strength. Special shouts and much love to: Dave Tough, Pell, Peter Rafelson, Briana O, Jonathon Eley and Nick Emory.