We had the good fortune of connecting with Kyle Mayfield and we’ve shared our conversation below.

Hi Kyle, what led you to pursuing a creative path professionally?
Music is my life force. Its my blood. When i was a little kid my parents used to wake me up by putting music on in some way. Whether it was a Buddy Holly record, a Black Sabbath 8-track tape, AC/DC’s Live at Donington VHS, or a fourth of July concert seeing Herman’s Hermits play their classics: my family was always big on music. I was replicating New Kids On The Block dance movies to my VHS recorded concert when i was in preschool. By the time I was in middle school I started writing horror/sci fi short stories and I would make soundtracks to them by shoving the microphone end of the boom box up against the tv speaker when their music videos came on. When sleep would escape me(which has always been often) I would stay up binging VH1’s insomnia hours and just soaking in every second of every bit of music I could find. The summer of 2000 hit and for my 13 birthday my parents finally saw what my soul was trying to say and bought me a beginner squire bass. I was asked to be the bass player in my friends band to complete their trio almost immediately. That was the end of my life without being a musician. It was maybe a month before we booked our first show and there you had it. we were a full fledge band. The guitarist and I recorded our first TWO albums on cassette with that same boombox later that year with me playing a kitchen stool with drum sticks and him, playing the acoustic. After a year of writing constantly and playing shows where we could I was asked to join another band. So I played in both. Two completely different styles. I have been involved in multiple projects of various genres ever since. When you play music with someone, its a special connection. Its an intimate bond where you are vulnerable and empowered at the same time. Sometimes you can feel yourselves merge into one sound, one being, one soul. Even if its only for a moment. But its a pure moment. Then you have a similar experience with the listeners as well. You become one sound. One force. Superconnected, as Broken Social Scene would say. Music is a key into real magic. Seeing things that you wouldn’t normally see or hearing things you wouldn’t normally hear. You can communicate with everyone without saying a word. And without saying one word, you can say a thousand words. It can take you into its own worlds that don’t exist anywhere else. Where everyone is welcome and allowed to be who they are. Its freedom. Its a gift. Its love. Its my way of life. 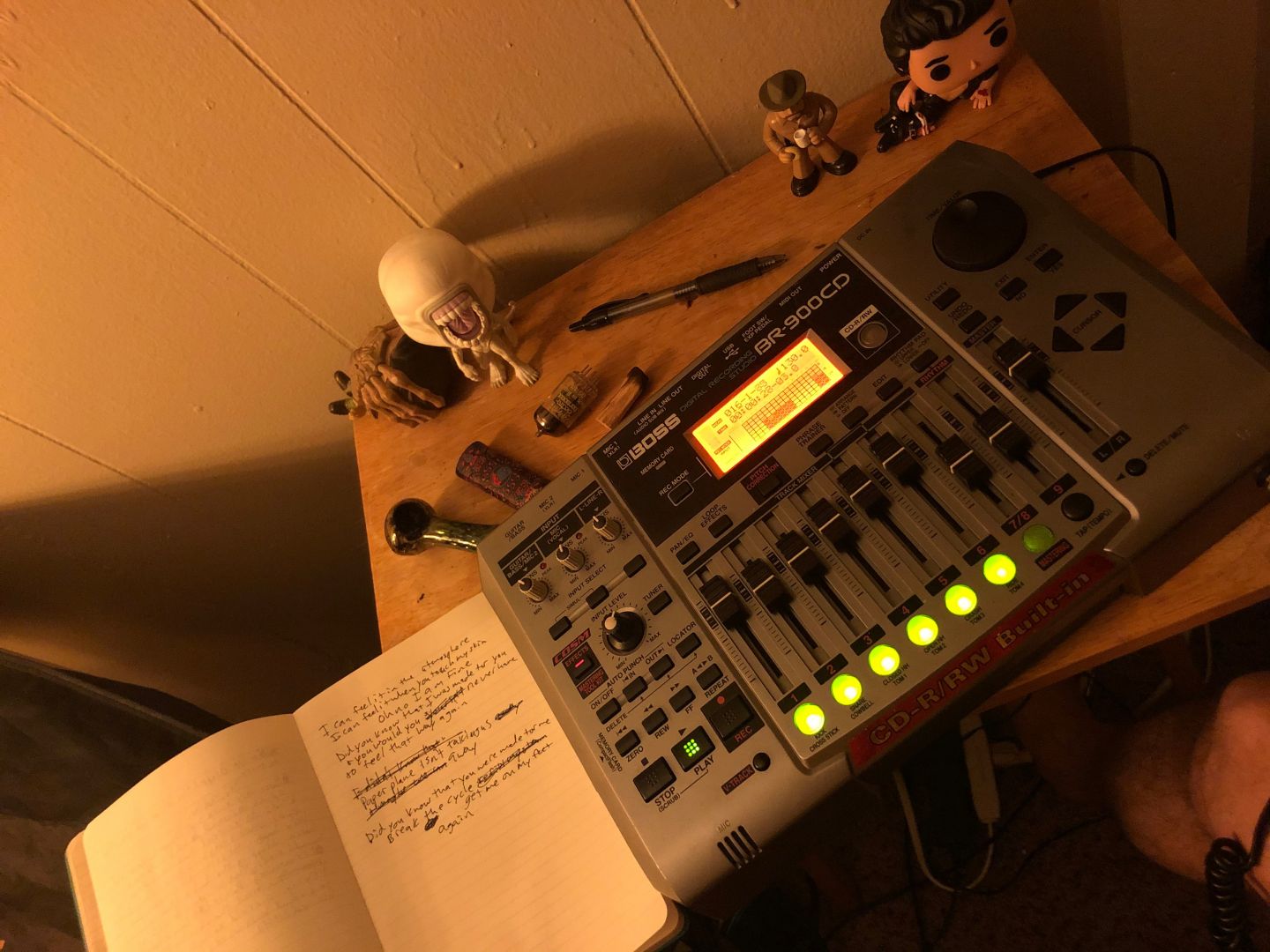 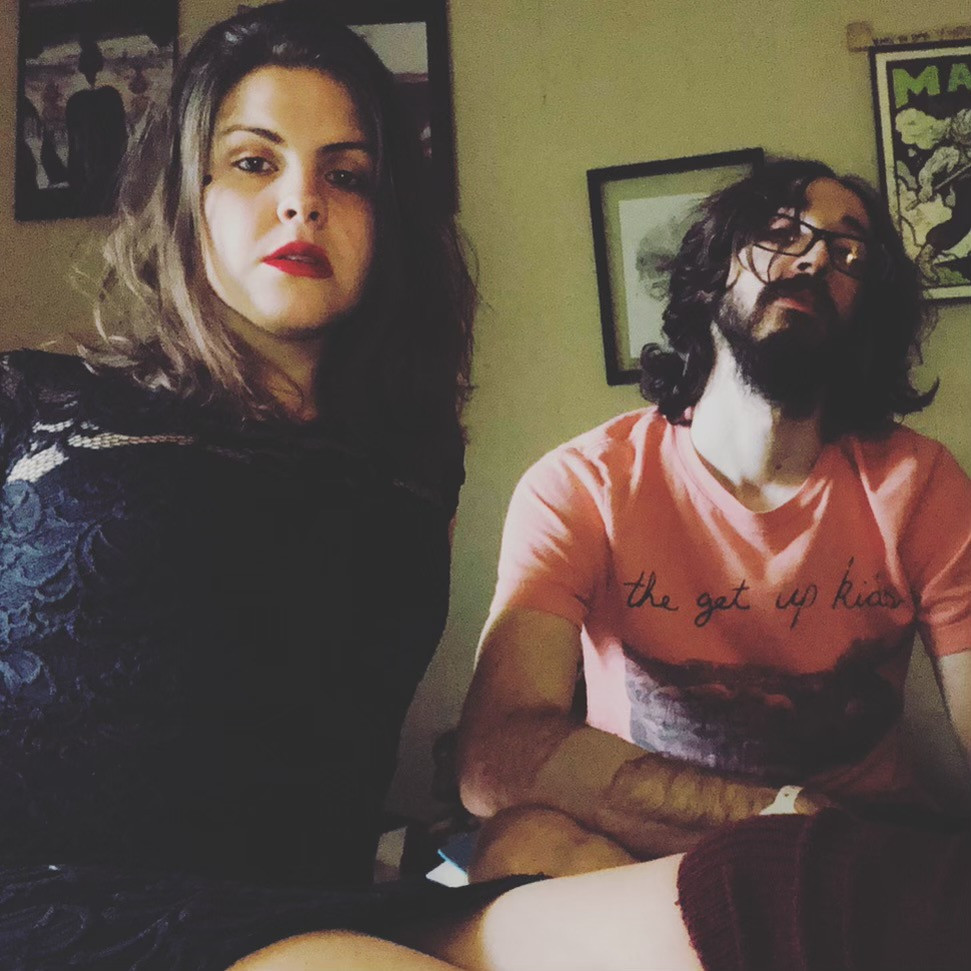 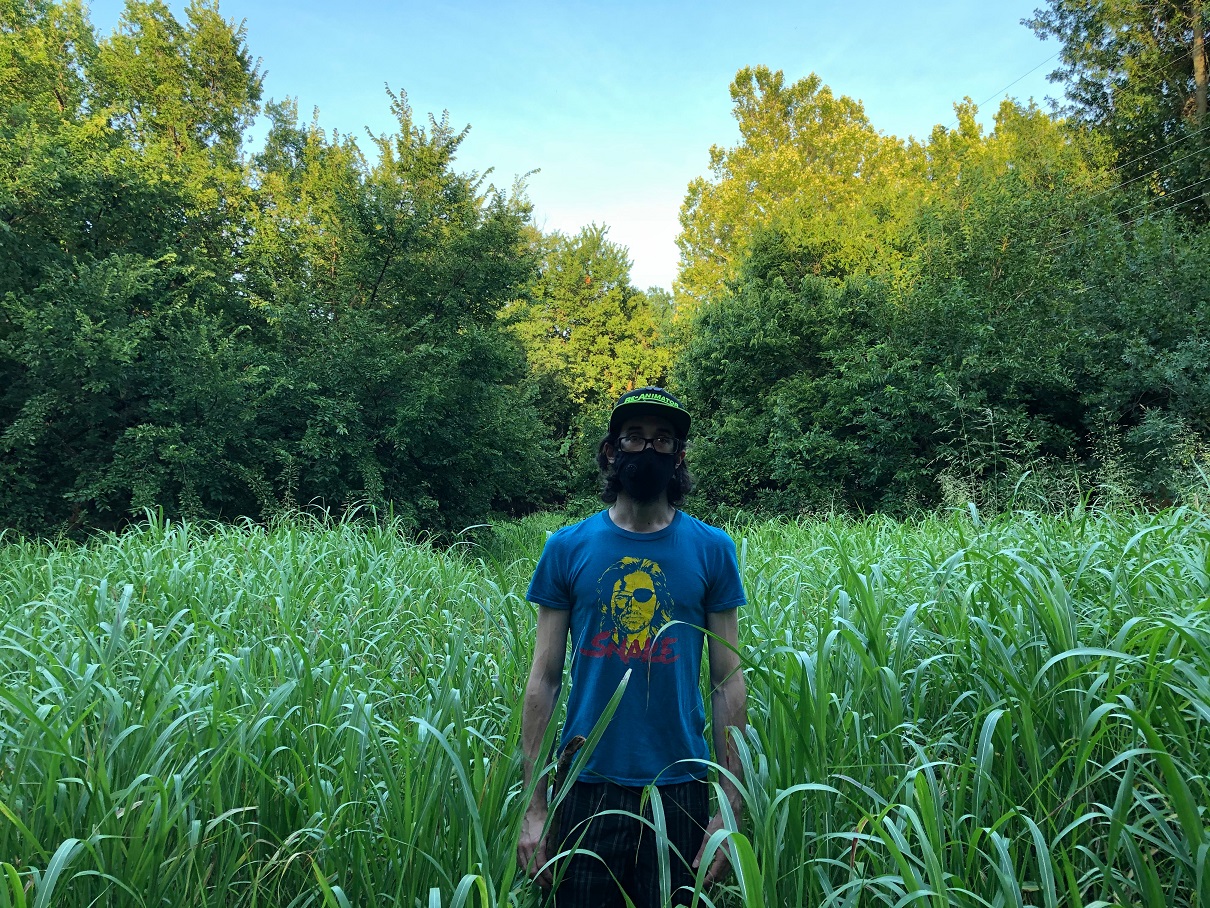 Any places to eat or things to do that you can share with our readers? If they have a friend visiting town, what are some spots they could take them to?
Here inoklahoma we have a lot of bars and a lot of restaurants, But here is what I would do: First off, I would take them to my favorite bar/venue: The 51st Street Speakeasy. The staff is some of the best people you will meet in Oklahoma. Great drink selections, great prices, the place itself is a huge old speakeasy with several rooms and comes equipped with its own ghost. On certain nights you will catch some tension and possibility some visuals from our lovely ion house spirit. (Oh by the way I am a horror freak , should have mentioned that earlier, explains the Larry Chin project haha). This crew also is probably the biggest music lovers in the city. When they could, they hosted tons of shows all the time. Even on sunday they have an open house jam session for anyone to come get their jam on. For the best conversations, music, and drinks hit up the Speakeasy. Really any weekend day is great for going. Definitely gonna need some food- There is a tiny hole in the wall in a little suburb town where I am from called Mid Del Taco. Nothing like it. Cheap as hell, not the greatest thing in the world, but man you just cant beat it. Go and spend 15 bucks and try to eat it all. You will want to so badly, but won’t be able to because you are so full. While we are hitting the south side, we take our full bellies and head on down to the Winchester Drive In. Super old drive in theater that still kicks a lot of tush. Been going since I was a kid, and will continue to until they stop me. I have seen some top notch movies there, including “Twister” when it came out and it was thunderstormning during the film. Really gives you a sense of dread being a little kid and not knowing if the movie will get you or the real tornado will. Now we shall hit the streets where ;local shops go to live: The Paseo Arts District. SO many local shops, with weird things, and old things, and weird people buying old things, and old people buying weird things, and all that good stuff. Lots of beautiful murals, and eateries. Even some local smoke shops that will cater to the card carrying individual. Quite a good time if you got time to shop around. We may not have many museums, but our Science Museum is pretty awesome,. Lots of things to do and learn of course. Not to mention the shadow room. Where you can jump at just the right time as the light flashed and leave the perfect jumping shadow on the wall. Also get a taste of what an earthquake feels like(even though we get real ones now, its still nostalgic). Or hit the planetarium which is my favorite spot there. Lay back and watch the sky and constellations as someone tells you all about them. Just don’t fall asleep, because you are bound to snore and we will find you. Then you could hit up the local favorite restaurant, Guyutes. Grab their Tequila Sunfries or throw back one of their signature cocktails before you head over to- The Tower Theater. Where you can catch some bigger touring acts like our friends Built To Spill, or The Mountain Goats. Or scratch your dive bar needs and hit The Drunken Fry. Especially if you are there to see the very strange and uniquely groovy local band, The Endocrine Twins. (lots of great local talent, too many to name) We have some really awesome Nature spots too, Like Martin Nature Park or you can drive a little ways and hit The Arbuckle Wilderness where you can drive through and pet all kinds of animals! You are bound to see and meet a lot of people that are interesting and worth getting to know. Of course there are bad seeds everywhere, but I know a lot of really good people that would brighten your life up with one convo. I know there are other places, but this is a good run at an itinerary. Come on down and lets hang! 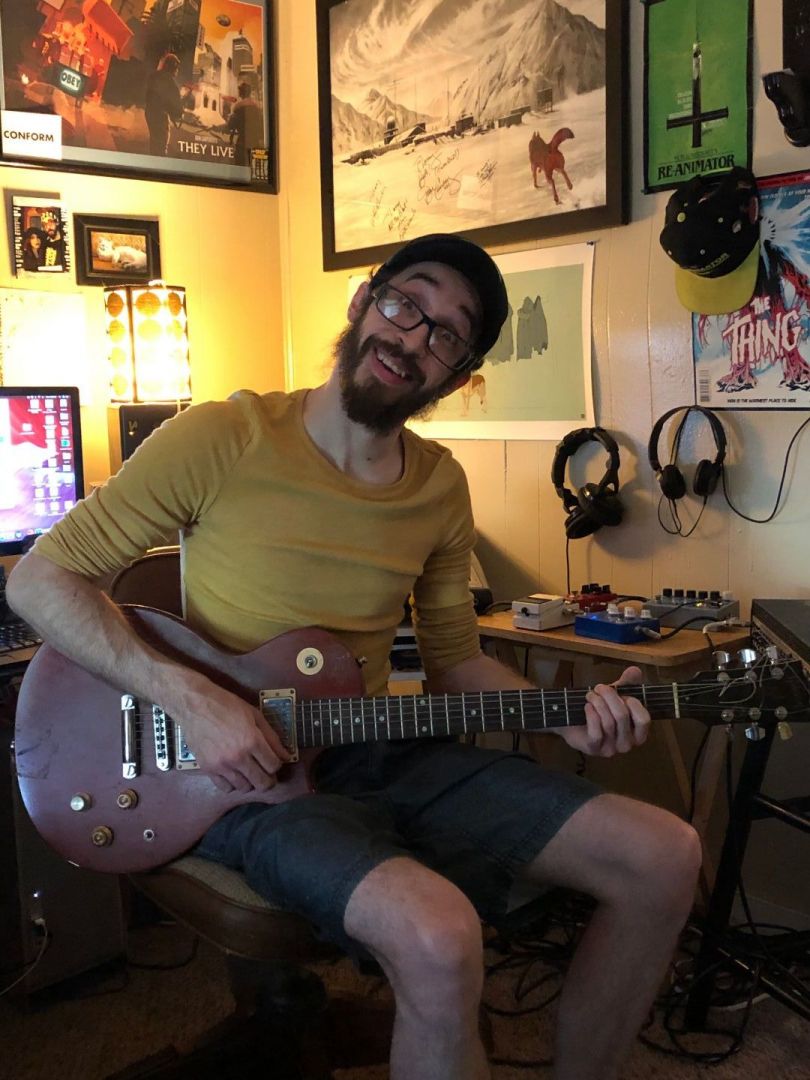 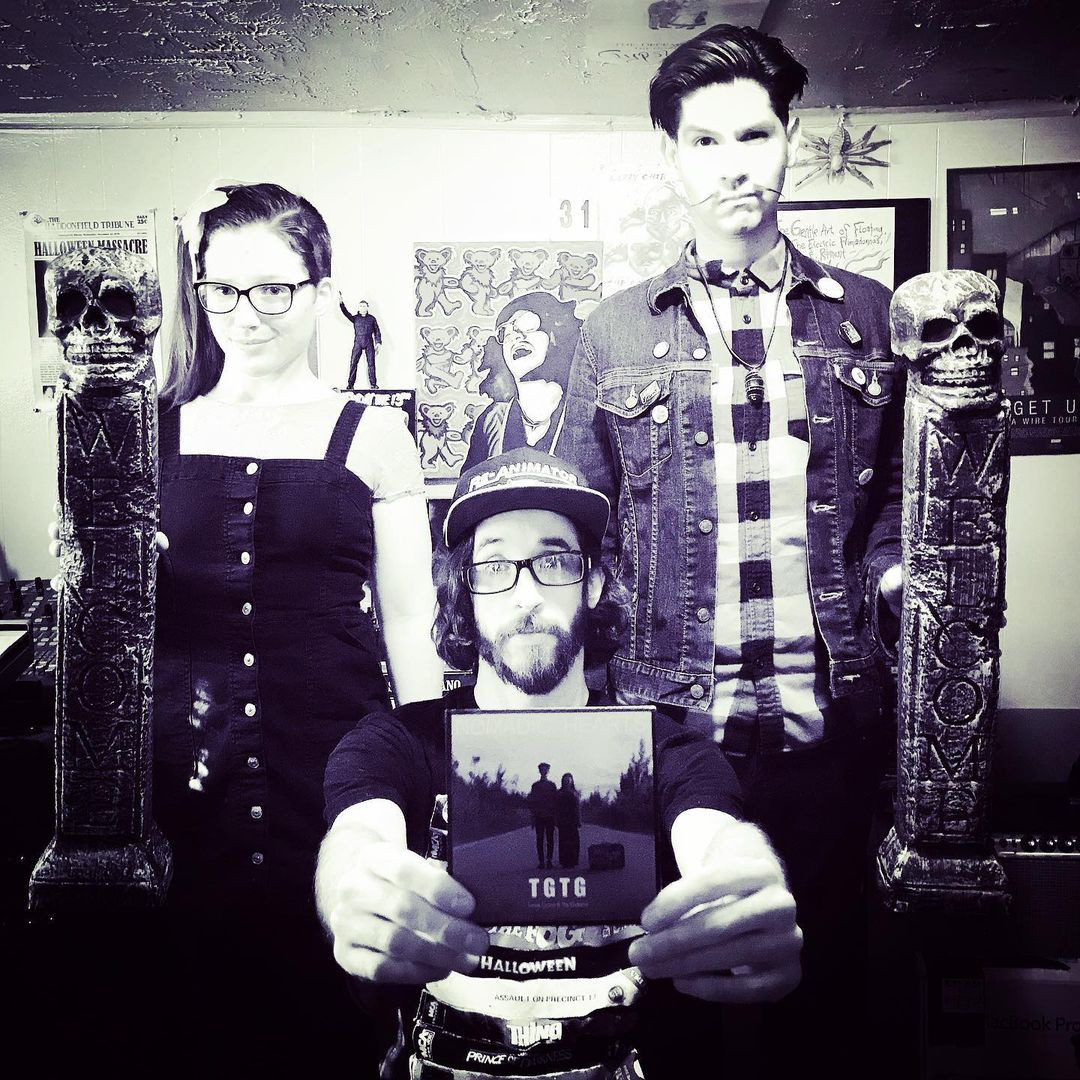 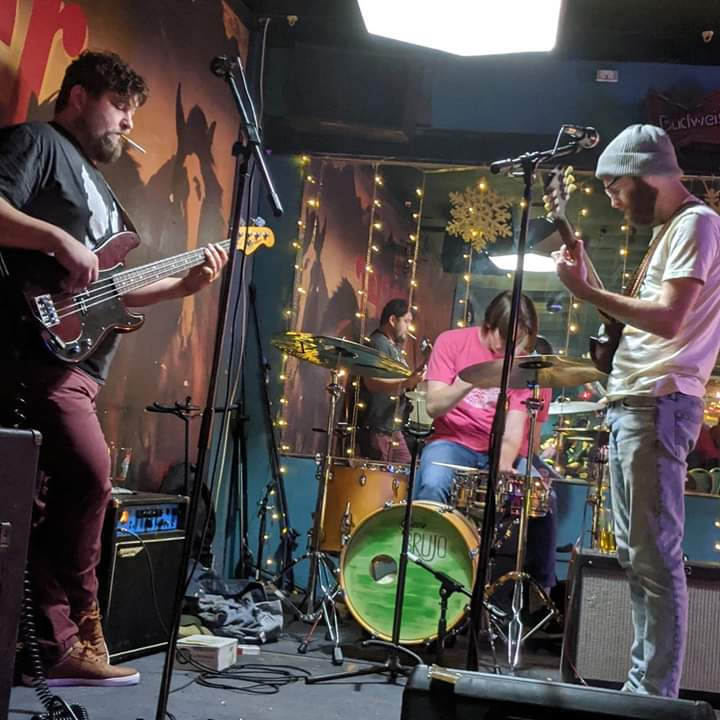 Who else deserves some credit and recognition?
There are SO many people who have helped in numerous ways along this journey, and I would love to thank each and every one of them in person someday. But today, Im gonna focus on two guys in particular, With out Sam Welchel and Isaiah Sharp, I would be nowhere near where I am today. The three of us have been tearing up the music scene for 15 plus years now. We have played in multiple bands together, taken those multiple bands on the road, recorded pretty much every one of my projects in various studios across Oklahoma. Sam has engineered or helped produce majority of all my projects, and Isaiah has helped produce and engineer a whole lot of them, as well. We are all multi-instrumentalists as well, so anytime anyone is looking for a hired musician or some to hop in with the rest of us, they are always at the top of my list. They are my go to guys for everything. “Experimentation?” Yes Please. “Whats that instrument? Can you play it? Not….Lets do it anyway!” “What time is it? Who cares!” Its always such a great time with these guys and the results are always fantastic. I have learned so much from Sam as an engineer and producer. Same with him as a drummer. Top Notch. Isaiah has taught me how to pivot and think on your feet, and think differently. His guitar playing is very unique to him and always inspires me to write outside of my own box. More Top Notchness. Their open-mindedness, their patience, and their dedication to their values and what they believe in is contagious. I can always trust them to be real, honest, and care about what really matters. Through the thickest and the thin, these brothers have been right with me the whole time. When one gets down, the others bring them, up . Its ways been like that, and it always will be. My brothers for life. Thank you for the inspiration, the passion, always whipping my ass into shape and keeping my focus on the right things.