We had the good fortune of connecting with Lois P. Jones and we’ve shared our conversation below.

Hi Lois P., is there a quote or affirmation that’s meaningful to you?

What Survives Who says that all must vanish?
Who knows if the flight of the bird you wound remains,
and perhaps the caresses of flowers survive us, in their ground.
It isn’t the gesture that lasts,
but it dresses you again in gold armor
—from breast to knees—
and as much as the battle was pure an Angel wears it after you.

I suppose I’m cheating a bit by quoting an entire poem but this is a work by Rainer Maria Rilke which I return to again and again as much for its shimmering enigma as the sense of metaphysical satisfaction it brings me. Does the physical action of good or harm remain? If you hurt a bird do you destroy also the flight or does this flight continue to exist elsewhere in some realm of continuum just beyond our reach? The ending suggests that if the deed was good it lives yet in another form, dressing the angel in gold. As someone who has walked alongside Rilke since I began writing poetry, I find this relatively unknown work a kind of virtual lamp post for the road. 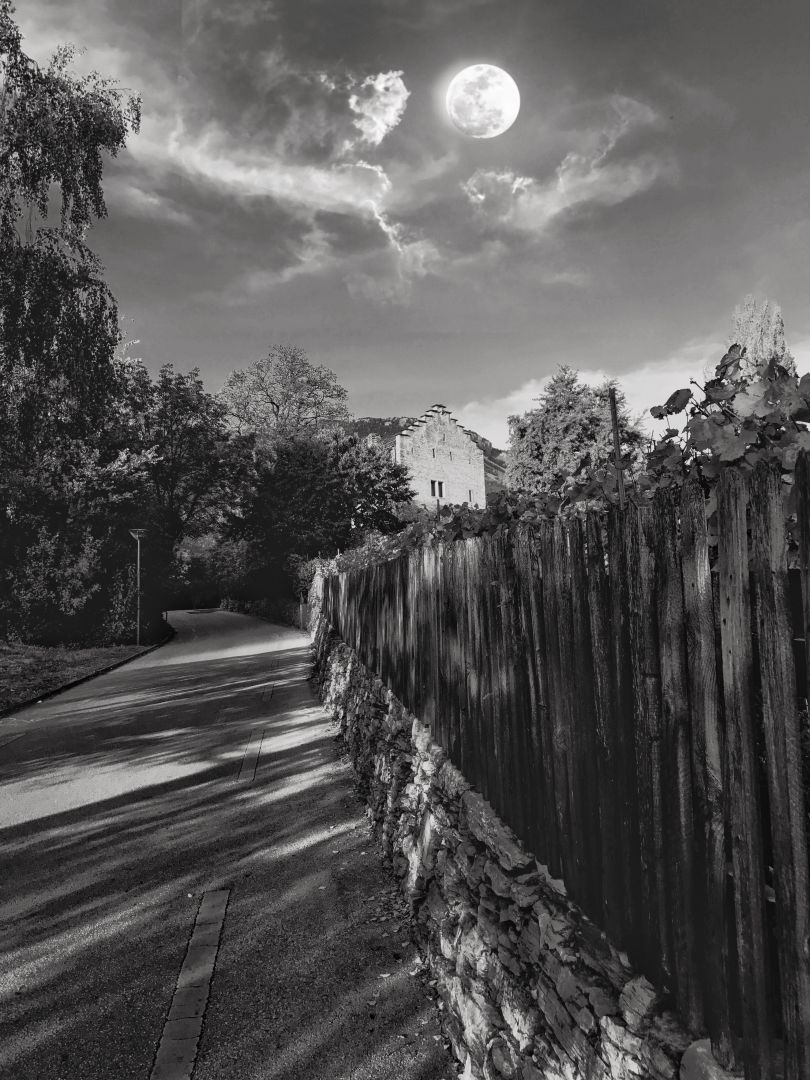 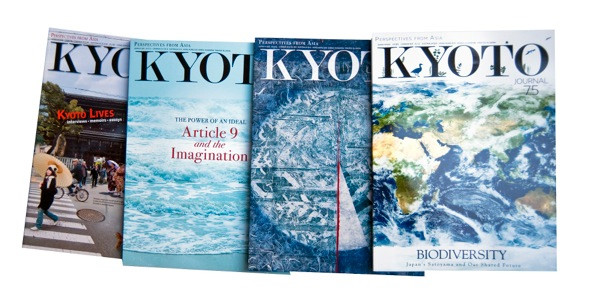 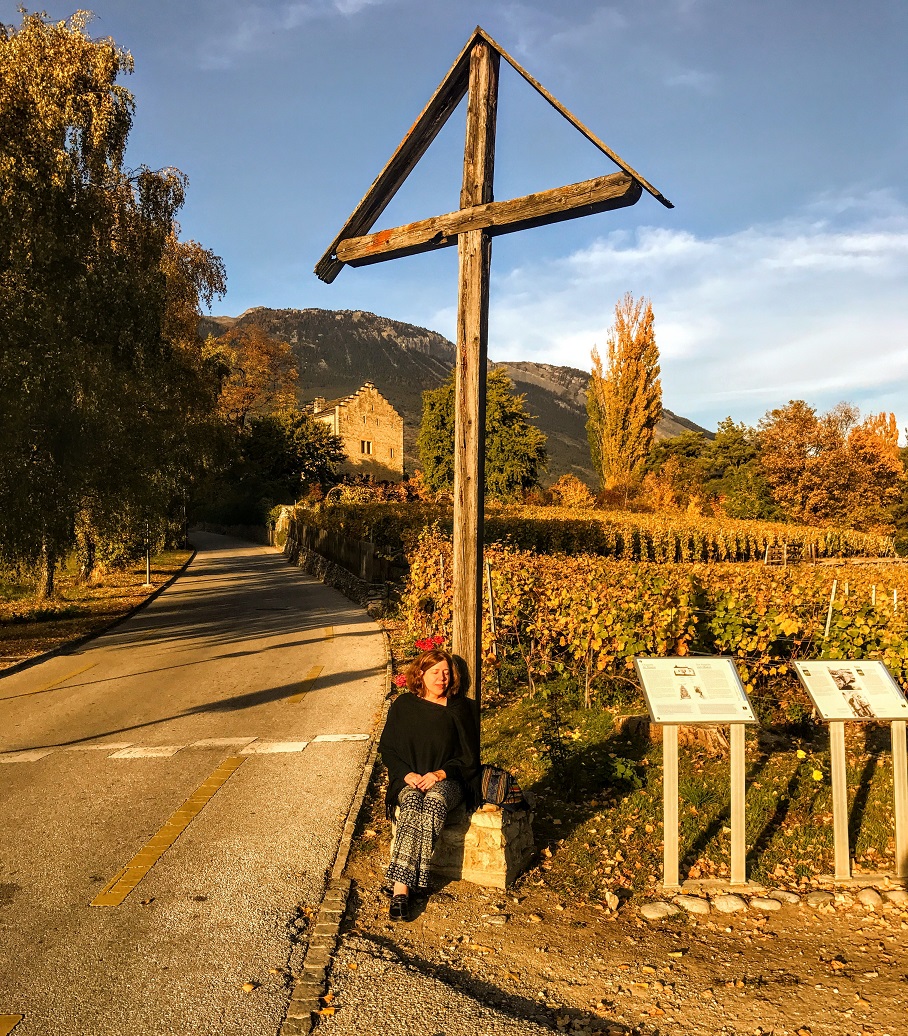 My friend J. Michael Walker calls himself a perennially emerging artist. I’d say that’s true of myself as well. I emerged late but immersed fully into the craft of poetry first through local workshops and then through weeklong retreats at the San Miguel Poetry Week in San Miguel de Allende for five years as well as retreats in Languedoc Roussillon France with Pascale Petit, a poet I’ve admired ever since I began writing in earnest. The years since 2005 have been steadily dedicated to craft with courses and regular workshopping through a local group of Pasadena poets who are accomplished writers all looking to improve their game. In recent years, The Poetry School in London has been a major source of learning and inspiration. Being the host of Poets Cafe since 2007 as well as the co-host of The Moonday Poetry Series and recently acting as a screener for the Kingsley-Tufts awards has kept me deep inside contemporary poetics. I’ve just offloaded about 300 books to make room for more! What has given me the greatest gratification are the interviews I’ve had the pleasure of offering during my 13 years as Poets Café’s radio host. There were exciting moments too like my conversations with Neil deGrasse Tyson, Julian Sands and Joy Harjo. One of my greatest joys is to sit (with) a guest and talk about their love of words and the inspiration and meaning behind their work.

A best moment was winning the Bristol Poetry Prize and traveling to England in 2017 for a reading at their annual poetry festival. Liz Berry was the judge and she chose my poem “Foal.” It was not the idea of winning that I’m particular proud of but the notion that the poet whose work I admired chose a poem that was deeply personal to me. It was written after reading Fugue for Other Hands by Joseph Fasano, one of my favorite contemporary poets. That was an incredible year. It was also the year Night Ladder was released, my first collection of poetry on Glass Lyre Press. It was also the year I traveled to Switzerland to stay at a residency in Trélex for ten days and to immerse myself in the land where my favorite poet, Rainer Maria Rilke had lived the last six years of his life. It was life-changing to visit his grave high on a hill in Raron, Switzerland.
My work as poetry editor with Kyoto Journal since 2007 has connected me with a more global view of Asian perspectives. Our magazine at its core is a community that transcends place, while respecting and celebrating regional and local identity. Every time a new issue is released I am once again stunned at the extraordinary design and care in creating each often themed issue. I’ve come to see that (at) the core (whether as poet or editor) is my deep spiritual connection to the world embodied through all sentient life. This is my particular path and through our many recent crises, has brought my love of humanity closer to the surface. I have a passion for injustice, whether racial or in the field of mental health and the failed systems we have in place through psychiatry. My current focus is a collection based on the housekeeper who lived with Rilke his last years but I know my next will not only dig deeply into affronts of humanity but the ways in which life keeps asserting itself through the soil, lest we forget we are here not just to survive, but to live.

I’m a foodie so I’ll have to draw a map of some of my favorite local spots and a few gems throughout Los Angeles. My latest discovery is Perle in Pasadena run by Chef Dean Yasharian who brings his classical training in 3 and 2-star Michelin kitchens to lucky locals who are able to experience the pleasure of his French-inspired menu which satisfies from beginning to the tremendous and unforgettable finish. If you’re going to indulge in a dessert, forget the standard cheesecake hacks ubiquitous throughout the city. Opt instead for their tarte tartin which will leave you dreaming of its flaky filo crust until you are mad enough to indulge again. We all have our mythical desserts. Mine was in a French restaurant in Geneva at a place called L’Opéra Bouffe which was made unforgettable by its yet to be reexperienced tarte tartin with creme de gruyere. It’s also where I discovered poetry! The restaurant has closed its doors but my memory has not. In fact, it was reawakened at Perle when my companion and I dove into this masterpiece, enough for four people and pronounced it gold!
Other notable establishments are the Inn of the Seventh Ray. I’ve encouraged many a couple in search of romance and ambience to dine at the Inn and I’ve spent a lifetime there myself with many meals shared over the past three decades. Who wouldn’t want to “dine by candlelight under the stars, grand old sycamores,” and “waterfalls along winding brick pathways.” It is truly a magical place in Los Angeles any time of the year. Get a seat by the creekside and listen to the frogs serenade you in summer. Another French restaurant in my neck of the woods is Bistro de la Gare. Friendly Chef Bruno serves up classic French cuisine in the perfect neighborhood ambience on a residential street adjacent to the South Pasadena Goldline Metro. In just a few moments after being seated at one of the lovely outdoor tables you will disappear into this soulful bistro and imagine yourself dining al fresco along the Seine. The food is well prepared and flavorful. It’s another place I try to take my visitors and always memorable. A meal in Malibu on a full moon is pretty difficult to beat. I love The Farm Restaurant on Malibu Pier and veteran Moon Shadows has held up beautifully during this strange fugue of 2020. The Getty Villa, Zuma Beach, local hikes, star gazing. Those in search of hipster fun can find interesting things in Chinatown, Santa Monica, West Hollywood and elsewhere. Oh and if you’re lucky enough to attend a concert with Gustavo Dudamel conducting, then you will have experienced one of the premiere joys Los Angeles has to offer. But ah…there’s so much more! 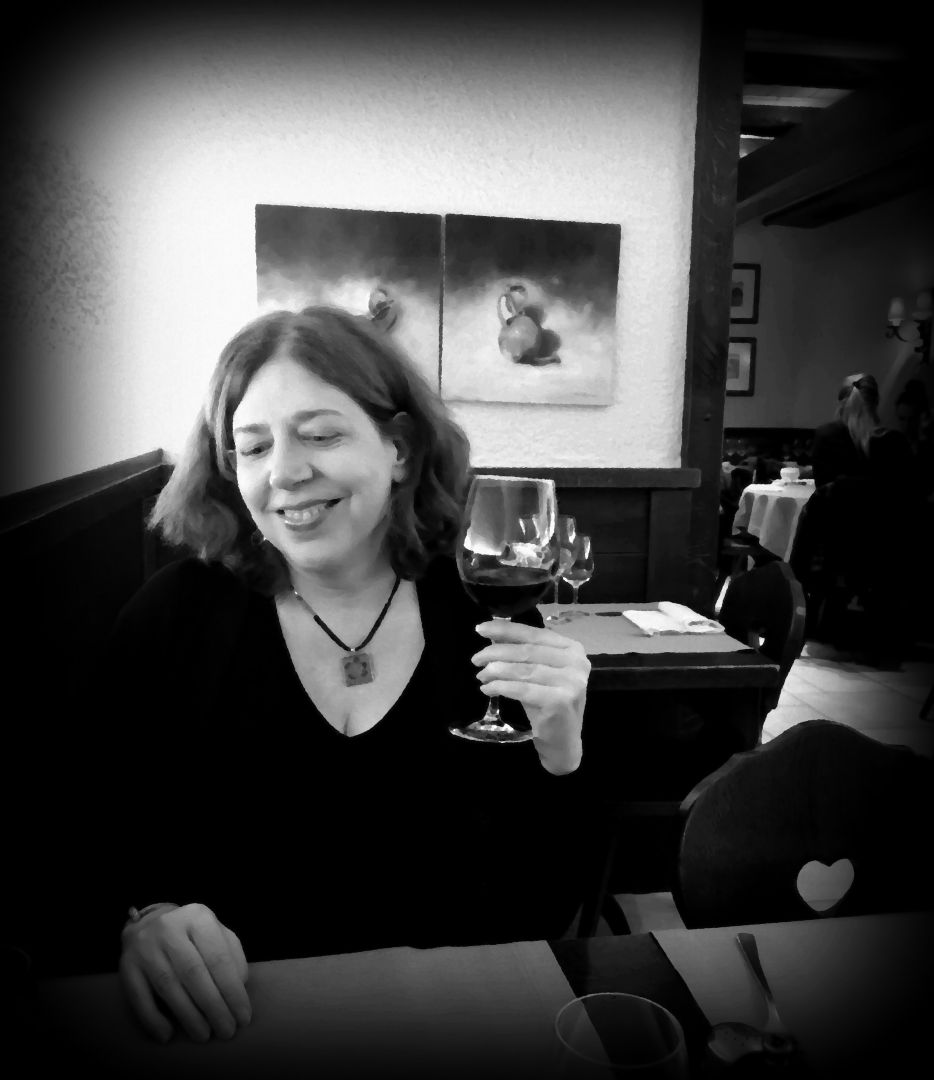 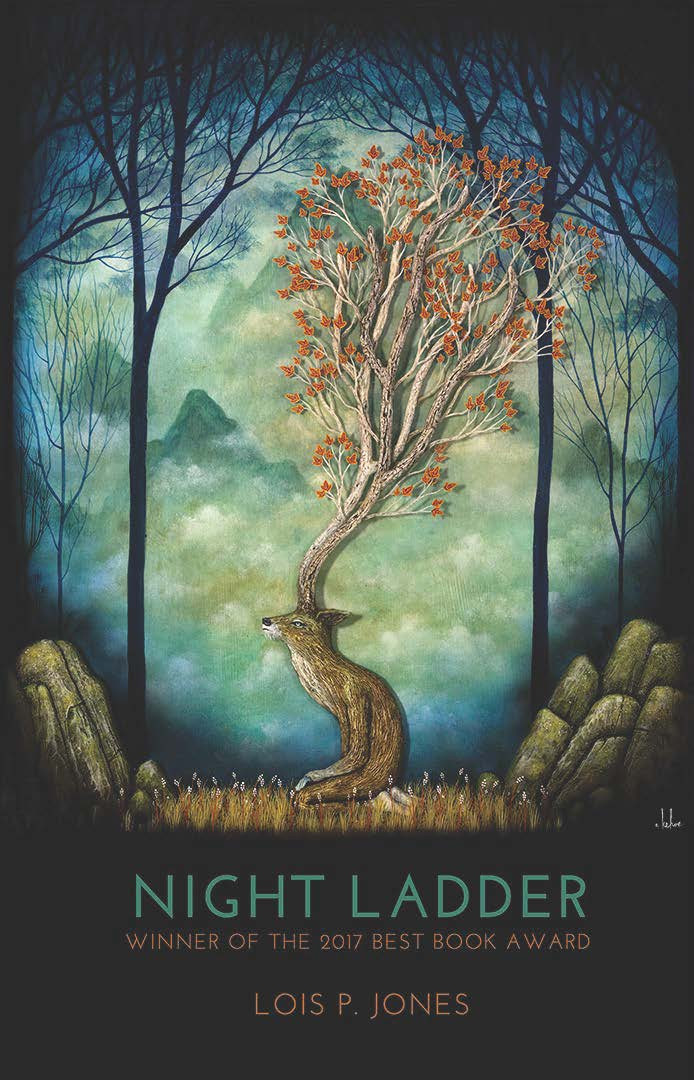 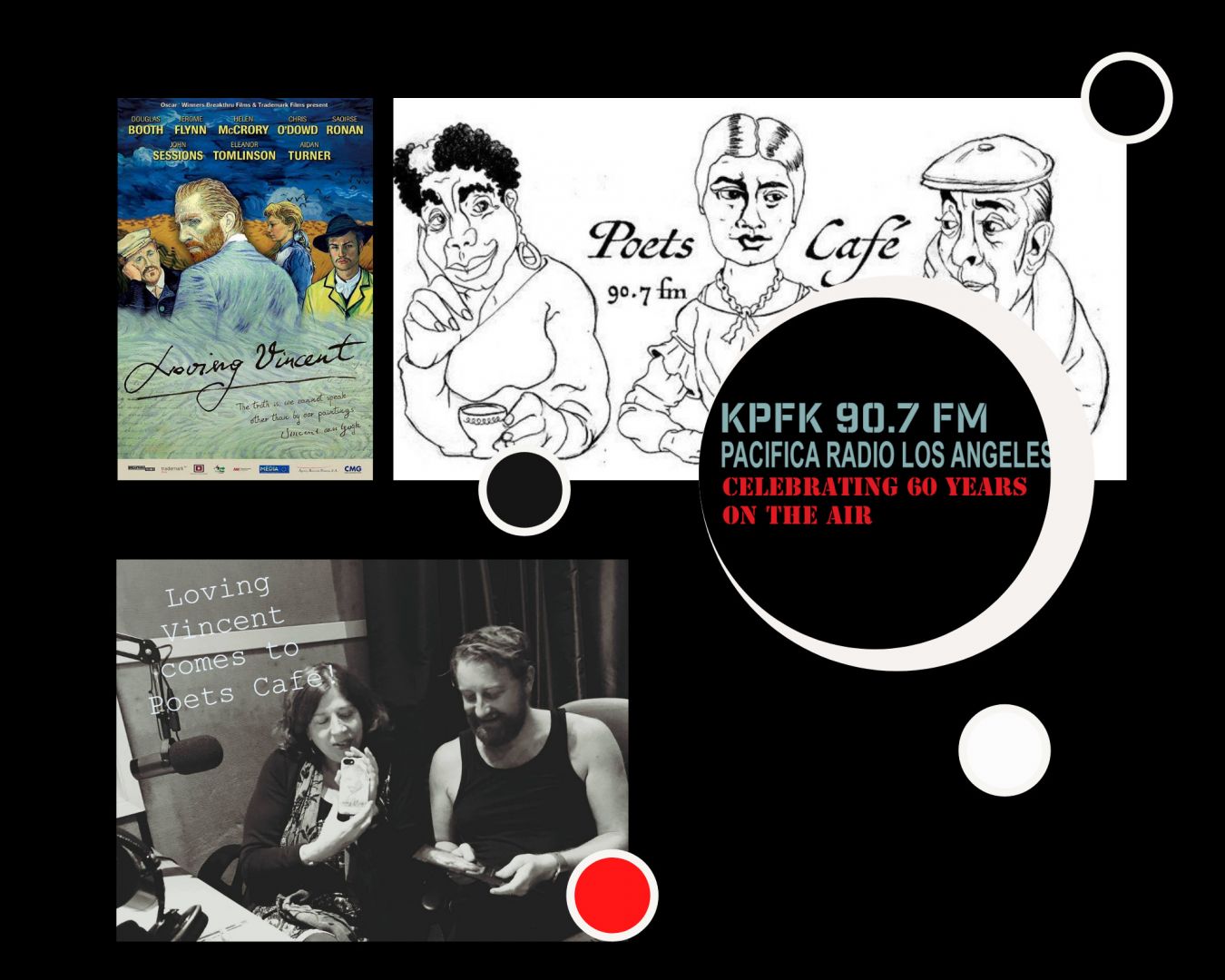 I’d like to dedicate my shoutout to poet, editor and educator, Elena Karina Byrne. I’ve known of Elena’s enduring reputation in Los Angeles over the years as a poet and moderator for the Los Angeles Times Festival of Books and as the Literary Programs Director for The Ruskin Art Club but it was only after I interviewed her as host of KPFK’s Poets Cafe back in 2018 that I came to know her personally and to discover one of the most generous, warm, talented and insightful champions of poetry I’ve ever encountered. Her long history of service to poetry including her 12 years as Regional Director of the Poetry Society of America, her judging of the Kingsley Tufts Poetry Prize, and her own prolific award-winning writing has kept her within the inner origami folds of Los Angeles’s complex and dynamic literary world. She brings all of this to the table whether as a Beyond Baroque workshop instructor, a tutor at London’s Poetry School or through her care and support of my own work on an individual basis. I’d also like to write a shoutout to producer Marlena Bond, who spent the past nearly 17 years of her life producing and editing countless hours of her brainchild, Poets Cafe for KPFK listeners. If Martin Perlich wrote the Art of the Interview, Marlena could certainly pen her own opus on the sensitivity, aesthetic and technical knowledge it takes to present a great interview and to keep a beloved show afloat for so many years. As long as I’m focusing locally, I want to acknowledge Suzanne Lummis who is interviewed elsewhere on Shoutout for her tireless voice and generosity in the world of poetry and her personal encouragement and occasional mentorship over the years. Suzanne Lummis is a noir rock star. Her series on poetry.la, They Write by Night has everything you would want from such a sequence – classic noir film clips, anecdotes of Suzanne’s rich dialogue with this genre, stunning, sexy noir poems and of course her sharp wit and acting chops don’t hurt either! She’s an educator who has taught for over 25 years for the UCLA Extension Writers Program and in numerous public workshops throughout the city and in private workshops at her home. The latter has forever changed the way I examine the proverbial “line” and a number of the poems she shares in her classes are part of my “go to” references when I want to see how a particular type of poem speaks from a voice of mastery. We are lucky in Los Angeles to have such a tremendous trove of poets and dynamic women who are invested in the diversity of our city and it’s many tongued songs.