We had the good fortune of connecting with Maya Neumeier and we’ve shared our conversation below.

Hi Maya, we’d love to hear about how you approach risk and risk-taking
I think risk taking brings us closer to our true north. It’s part listening to your gut, and part faith. I had a comfortable life in San Francisco Producing and Directing commercials for tech companies, but I wasn’t taking risks, or cultivating my creative spirit. I had had the itch to move to LA, leave my SF lifestyle behind, and just go for it. Then, all the pieces started falling into place before I could even utter the words “I’m moving”.

First a job offer, then a room in Hollywood opened up, then, I met the love of my life. A decision that I could have ruminated on for weeks, became a 4-day decision to close one chapter and open the next. This decision taught me so much. It brought me closer to my true north, and allowed me to trust my. gut.

I knew I wasn’t happy solely doing commercials, I knew I wanted to dream bigger, do more, and by taking a leap of faith, I’ve been able to commune with myself. Now I don’t work the same way I used to. I work with creatives I want to collaborate with, and subjects that inspire me. I’ve adopted the idea of only doing work that I would do if I was only paid $1. At the end of the day as an artist, the body of work we leave behind represents us. I don’t want the commercial that paid my car bill to represent me if it didn’t come from the heart. I’d much rather spend my time, sculpting a portfolio that I love, while feuling my creative fire with the hunger that got me into filmmaking in the first place. 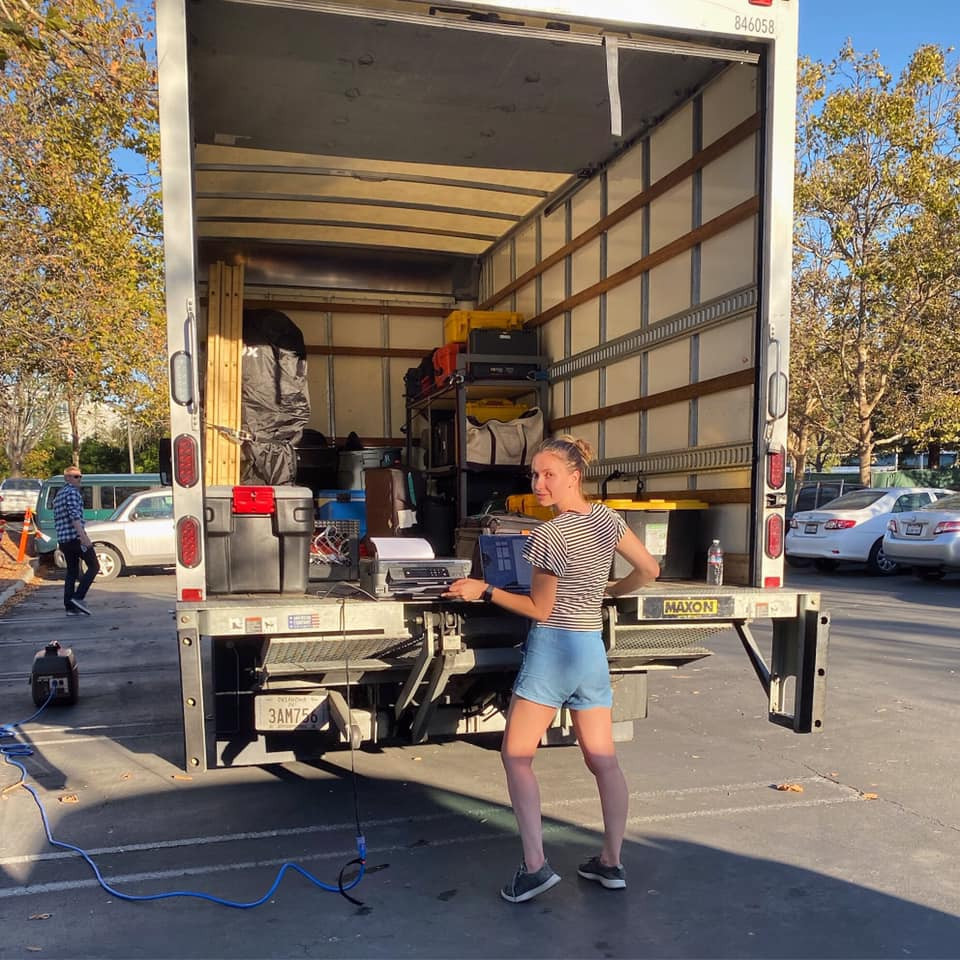 Alright, so let’s move onto what keeps you busy professionally?
I believe my art is unique because of my life experience. I was very grounded in theater, and drama as a child, and then moved towards commercials and marketing content in my early career. This makes my style rooted in classic film styles, that feel nostalgic, or memory like. While still having that knack for marketability and a grounded understanding of producibility within whatever creative constraints arise.

I’m in the process of creating a short film with my partner Ed Herrera that embodies the essence of Hollywood that we all feel when we first land here told through poetic anecdotes from the neighborhoods that have seen the changes over the decades. I’m very excited about this film, and even more excited about the feature that we are currently shooting. Both of which I am so proud of, and excited to release.

I’ve only been able to get where I am today, by taking every play, set experience, every screening, and every conversation as a learning opportunity. I learned so much from directing and stage managing theater, that has greatly informed my filmmaking. In the beginning I had hoped that film would work out like we all hope it does. You make a short film, someone recognizes you, and gives you money to make a feature. The problem with this approach was that I wasn’t thinking of posterity, while making my films. I was just thinking about what stories, and images I wanted to create right then.
When I was just directing short films, I had one foot on the ground, and one eye to the sky. I wasn’t able to fully accomplish what I was trying to get done, because I was spread too thin between the creative and the logistics. This brought me to reality, and made me realize that more than anything, I just needed to get on set. So, I started PAing. It wasn’t glamorous, it wasn’t necessarily fun, but my god, I learned something every day. I was lucky enough to land on pretty big sets right out the gate, and had a solid foundation in Accounting/Logistics (thanks mom) so I moved onto production coordinating within a couple of months. This taught me SO MUCH about filmmaking. Everything that goes on behind the scenes. Where every penny goes, what every job does, what real filmmaking as a business looks like. It rocked my world, and sleep schedule, but I was so grateful for all of the opportunities and travel that opened up for me by doing my time in the production office. I eventually moved onto Production Managing, and then Line Producing. I’ve been so fortunate to work alongside some truly amazing producers, and am so grateful for their insights, and advice as I leaned into a more Creative Producing/Directing role. A lot of it came from conversations with those I looked up to, who wished they had really taken their shot when they were young, and did the project they always had in the back of their mind.

After years of working in Production I had to stop. It wasn’t good for my health, or my happiness. I was managing large budgets, and large crews, and knew all the union rules, and players, but I hadn’t touched a camera, or piece of equipment in years. I was making films, but wasn’t MAKING them. So that became my biggest challenge. Accepting the journey that I had taken, thanking those that had taught me, and utilizing that knowledge with my core interests and curiosity. It’s taught me the biggest lessons in filmmaking, to return to my roots. Mainly that I love making films, and I want to be a part of the DNA that makes whatever I work on. Whether it’s a passion piece with my partner, a commercial for a brand that I love, or a collaboration with another filmmaker, I just know now that there’s something special about our unique touches that we shouldn’t shy away from. If something feels like it’s not right, it probably isn’t, but listening to your gut, and having a little faith in yourself, and cultivating that hunger that drove you in the first place, changes your art, and changes your life.

Let’s say your best friend was visiting the area and you wanted to show them the best time ever. Where would you take them? Give us a little itinerary – say it was a week long trip, where would you eat, drink, visit, hang out, etc.
Ooh if my best friend Casey Davis *cough cough* were to visit LA for a week, we’d have a full schedule for sure. I’d pick them up, take them to Wabi on Rose in Venice for a little lunch – the short rib bao tacos are amazing, and the floral decoration is so precious. From there, we’d venture on over to The California Science Center for a little day at the museum. Say Hello to Endeavor and explore the new exhibits. That night, we’d have a happy hour dinner at Escala in Ktown a Colombian/Korean fusion and get their street corn, and kimchi fried rice empanadas. The next day I’d make sure to visit Larry Edmunds bookstore in Hollywood, pick up a couple books, then head to Alcove on Hillhurst for a Smoked salmon stack, and cappuccino no matter the time of day. From here, we’d walk around, looking into the local shops, then head to Ronan LA for dinner. Here’ I love to get the amaretto flight, their scorched focaccia, and two pies. The spicy chomper, which is a diavola/pepperonia style pizza, and the sweet cheeks which is to die for. A ricotta, and honey cacio e pepe pizza. It’s so good, and the wood fired oven makes the texture unlike any pizzeria in LA, and trust me I’ve tried most of them. For drinks, we’d go to The Spare Room for a couple of poolside cocktails. Finally, if we had one more day, we’d relax in Brand Park near the library, have lunch at Guisados in Burbank, where I get conchinita pibil tacos and an horchata latte. Then, after a stroll, we’d head over to The Prince LA, for soju and Korean fried chicken. There’s so much good food in LA. Finally, if we were feeling confident, we would headover to moonlight rollerway for a little skate session amongst some of LA’s greatest. 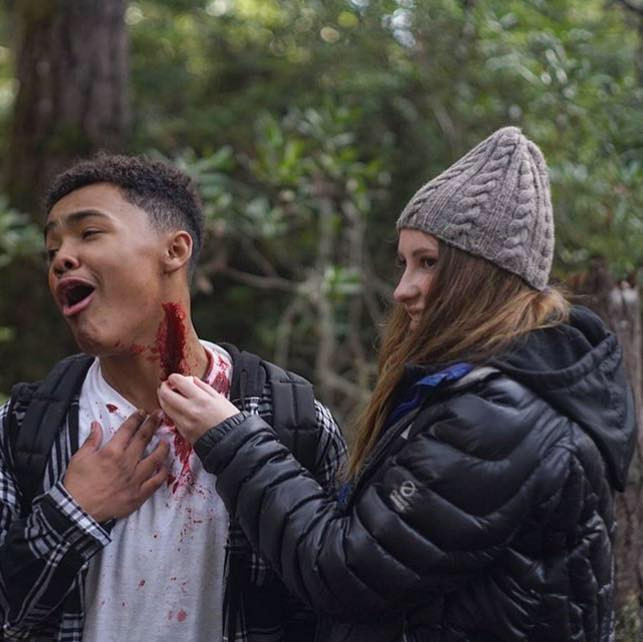 The Shoutout series is all about recognizing that our success and where we are in life is at least somewhat thanks to the efforts, support, mentorship, love and encouragement of others. So is there someone that you want to dedicate your shoutout to?
I’d like to dedicate my piece to my little hometown Mendocino. Mendocino is more than a beautiful slice of coast in Northern California, it’s a beautiful community. My parents Patty and Jeff Neumeier owned a little deli blocks away from my school. I’m sure they hoped I’d take over their deli one day, but they found out pretty quick that that wasn’t going to happen. I was constantly at rehearsal for the community plays I’d act in as a kid, and all my weekends were spent in costume and makeup reading backstage. If I wasn’t in the play, I was Stage Managing, operating Lights or Sound, or watching one of my mentor’s shows for the umpteenth time. My mom, bless her heart would work a 60-hour week and somehow get me to and from every engagement I had along the 8-mile coast. On the other side, Mendocino Theatre Company, and Gloriana Musical Theatre formed me into the filmmaker I am today. The community actors, and technicians took me under their wings, and treated me with the utmost respect. Felicia Freitas, Lorry Lepaule, Dan Kozloff, Bob Cohen, Doug Nunn, Derek Hutchinson, Andrew Atkinson, Lee Edmundson, Peg Brown-Levy, Ricci Dedola and Pamela Allen taught me everything that I know about drama. They knew that I wanted to end up a filmmaker, and while Mendocino didn’t have the facilities or technology to really excel at that, the theatre gave me a much more grounded entry into filmmaking. From patching lights, and designing looks for the stage using theatrical methods to method acting intensive workshops, Mendocino relentlessly worked to fill me up with as much knowledge as possible. I never would have been able to direct the plays that I was able to direct without the loving and giving community that I came from. As I transitioned away from theater, and more towards film, I was able to shoot short films in Mendocino, screen them for the community, and fundraise to make another. Little did I know that this would inform exhibition and distribution strategy for my career later on. Sometimes just having someone believe in you, and treat you with a little tough love, and a little respect goes a long way. I’m so very proud to be from Mendocino, and am so thankful for all of the time and attention that my community has provided me along the way.