We had the good fortune of connecting with Nicole Conn and we’ve shared our conversation below.

Hi Nicole, do you have some perspective or insight you can share with us on the question of when someone should give up versus when they should keep going?
Anyone working in either the film and/or literary fields knows how incredibly challenging it can be. Feast or Famine is pretty much the norm and when you have a family to support it can be quite unnerving when you have a bunch of rejections piled on your desk. I was on my 8th feature film and 30 years into my career when I had one of those, maybe I’m done moments. I had started in the early nineties and had rapid success in both film and books. I had my first film out when I was 35 and a 3 book deal with Simon Schuster. If I had known then what I know now I would have understood that the early success was luck and a gift and I wouldn’t have squandered it. I went from getting paid advances and paychecks in TV and really healthy option money that all came skidding to a halt as first the music industry was destroyed from the internet soon followed by books and films. The only way I could survive was fto move into micro-indie filmmaking because after 20 plus years of taking lunches and almost making it “BIG” my scripts always were put into turn-around and I realized that LA was the “fast track to the slow no” – the “hurry up and wait” hell I could not have imagined. And all those millions of meetings I had taken over the years really boiled down to a heap of calories and empty platitudes. I put out “Elena Undone” in 2010 which Hulu just picked up for it’s 10th Anniversary Release followed by “A Perfect Ending” in 2012. “A Perfect Ending” has been licensed over and over by Netflix pretty much through out the past 6 years. So I thought when I put together “More Beautiful For Having Been Broken” in late 2013 I would have it out in a year. But I hit all kinds of roadblocks to funding, financial sharks who embezzled money, legal issues with those sharks and then death. My father, sister and brother all passed away within 20 months of each other in totally unrelated circumstances and I couldn’t cope with the grief. And my son with Special Needs kept ending up in the hospital with pneumonia. I pretty much lost all my money trying to get this last film made and then the legal issues and those sharks became so huge I had to file bankruptcy. It wasn’t until ALL that happened that I realized my quest to become a “BIG” writer/director really made no sense. Because to become that person I would have to contort myself into all kinds of personalities to deal with the mass of pencil pushers in the big leagues. All the ways in which the “powers that be” – studio heads, managers, agents, and the attorneys all routinely get in the way of anything ever happening. Why would I want to trade all the creative control and the ability to have a more pure vision so I could deal with all the purveyors of commerce – not art. So as I was finishing up “More Beautiful For Having Been Broken” (inspired by my medically fragile and special needs son) it had taken me nearly 6 years to make. I am penniless. But something was happening. I was receiving emails, IM’s, Tweets, and texts from women all over the world who wrote to me to tell me that my films all the way back from “Claire of the Moon” in 1991 — which are all focused on women and women’s issues – had absolutely changed their lives. They watched my films over and over and over again. They felt my films helped them to heal. Made them laugh. Put their brains to work. Directed them to their authentic sexual selves. Encouraged them to come out. Led them to love. Or lightened their load. On top of this I have become life long friends with so many of these women from literally every corner of the world – even places I didn’t know could get lesbian themed films. It made me realize how incredibly fulfilling my life was and that my work and the passion for what I do was being repaid in love, laughter and friendship — and many of these women have gone on to support my films financially. Back when I did “Claire of the Moon” my very first feature in 1991 – I would wake up every morning and say, I’m the luckiest lesbian alive. And now after all those years, I truly feel like I’m not only the luckiest lesbian alive, I”m also the most blessed! 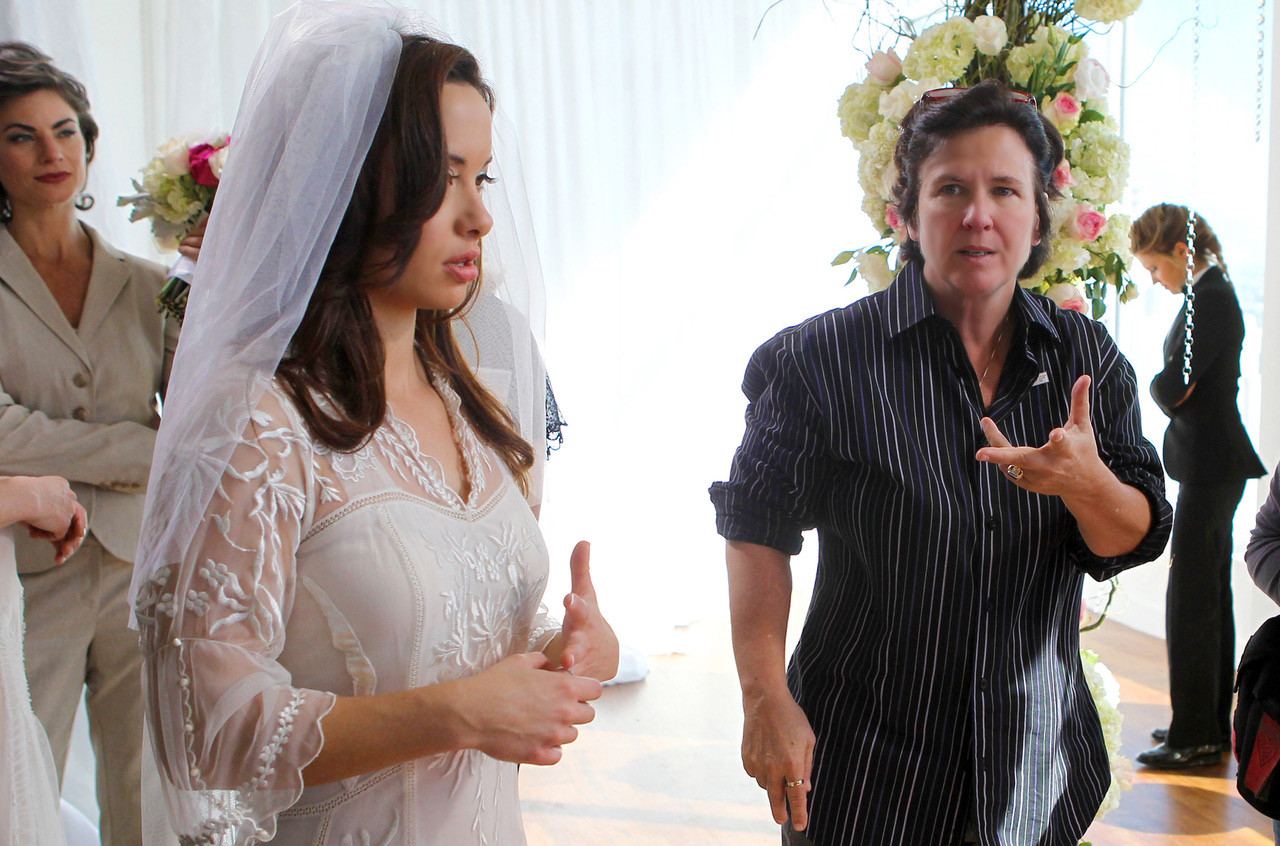 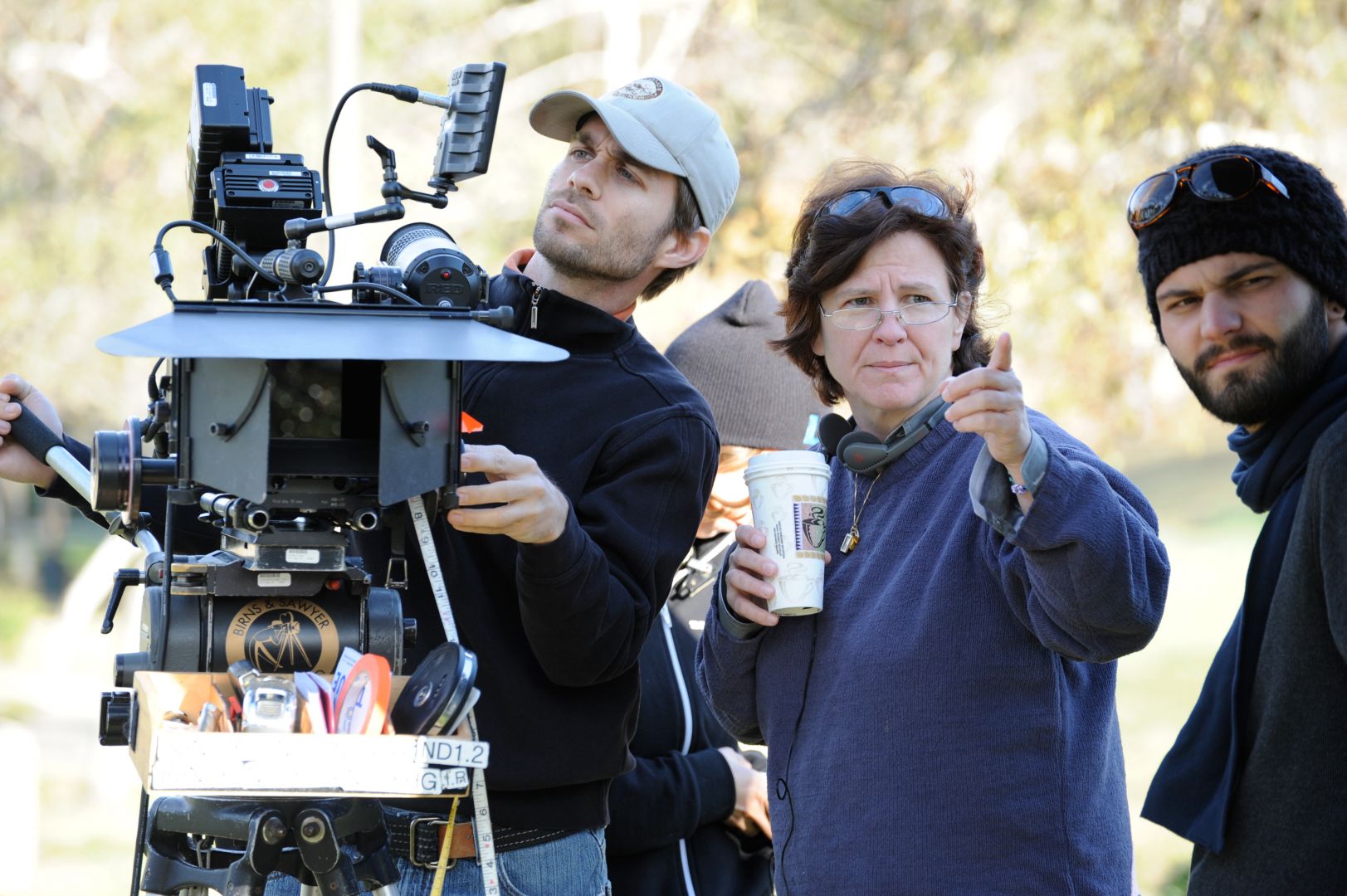 Alright, so let’s move onto what keeps you busy professionally?
I lead with my heart. I always have and yes, it’s gotten me into trouble. But it’s also put me on the path of what I love to do which is to tell stories about women who need to heal, find themselves, or deal with a life-altering situations. And then I try to find a motif or to tell that story on a parallel track. One film I used the art-form of pointilllims. Another I created a cinematic puzzle motif so the viewers could try to put all the pieces together to figure out what happens. I’m absolutely committed to these films and very passionate about what I do. An agent told me once, “write the book you want to read.” I decided I would “make the films I want to see.” But what I wanted to see was adult love stories – and I don’t mean “adult” porn. I mean films that deal with falling in love in a mature and adult way – as opposed to a rom-com. Like “A Year of Living Dangerously” or “The Way We Were” – very adult story lines so immersed in the feelings that you go there. But doing adult love stories and or sexual identity stories can be done either in a moody indie film way – or they can be executed as strong romantic stories and I don’t mean romance ala Harlequin. I mean romance that you can really sink your teeth into and be taken away and immersed in for at least two hours so that you can believe love like that does exist. Romance has always been my calling card starting with “Claire of the Moon” that was released in 1992/3. It’s now a Cult-Classic has been released for it’s 20th Anniversary about 10 years ago and the novelization has gone into it’s 20th reprint. I believe the way I make my films has branded me. I’m known for my love scenes as well as being very adept at casting my leads and making sure they have palpable chemistry. It’s a non-negotiable for me. I will chose a lessor actor and work them harder if they have that chemistry. I had a very easy time of my career at first and I really think I took it for granted. But no more. After 30 years of doing this I’ve been up and down and all around – I’ve taken meetings with A listers at The Polo Lounge and Four Seasons and drank bad coffee at a bad Denny’s “doing lunch.” I’ve lived in 17 different homes in LA through the riots in 91, the earthquake in 94 and now Covid in 2020. One of the biggest lessons I’ve learned is that the adage that you “only get to ask one favor” and to make it count is utterly ridiculous. I discovered one of my greatest strengths was in my ability to ask. Sometimes beg. You can’t raise money for all of these films, write/direct/produce/edit and run craft services without asking for help and for favors. I routinely ask for favors all day long. And you know what. People like to grant favors. They like to help and then you develop a relationship and that’s how so many of my friendships have begun. The absolute worst thing about what I do is asking for money. Pimping out all my films’ paraphernalia for donor gifts. Running a Kick-starter or Indie-gogo campaign is like begging everyone you’ve ever known 24/7 for 10.00 here, 25.00 there. The insanity and psychological awfulness of begging for dollars can’t be underestimated. So I came up with a hybrid funding program for women to look at their individual pocketbooks and decide what they can afford monthly to ensure a good lesbian film every 18-24 months. We’ve just launched the site and would love your readers to take a look: www.nicoleconnfilmsglobal.com What I’m most proud of is the legacy I have left for the lesbian community with films women watch over and over and over again and write to tell me how much they have been touched or impacted by my films. Nothing better than knowing you’ve helped someone in a real way with your work. It’s beyond rewarding. And humbling. 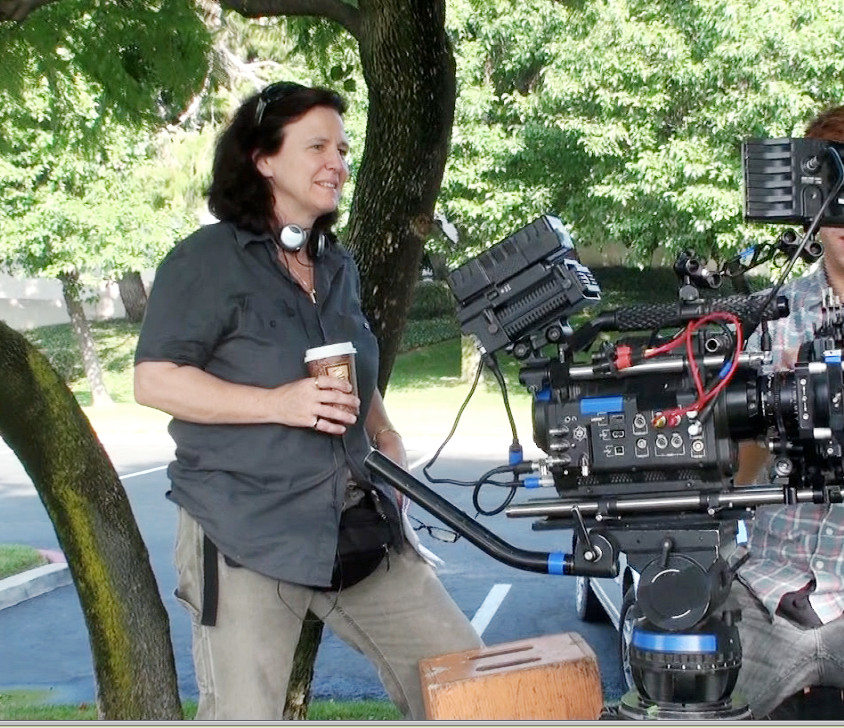 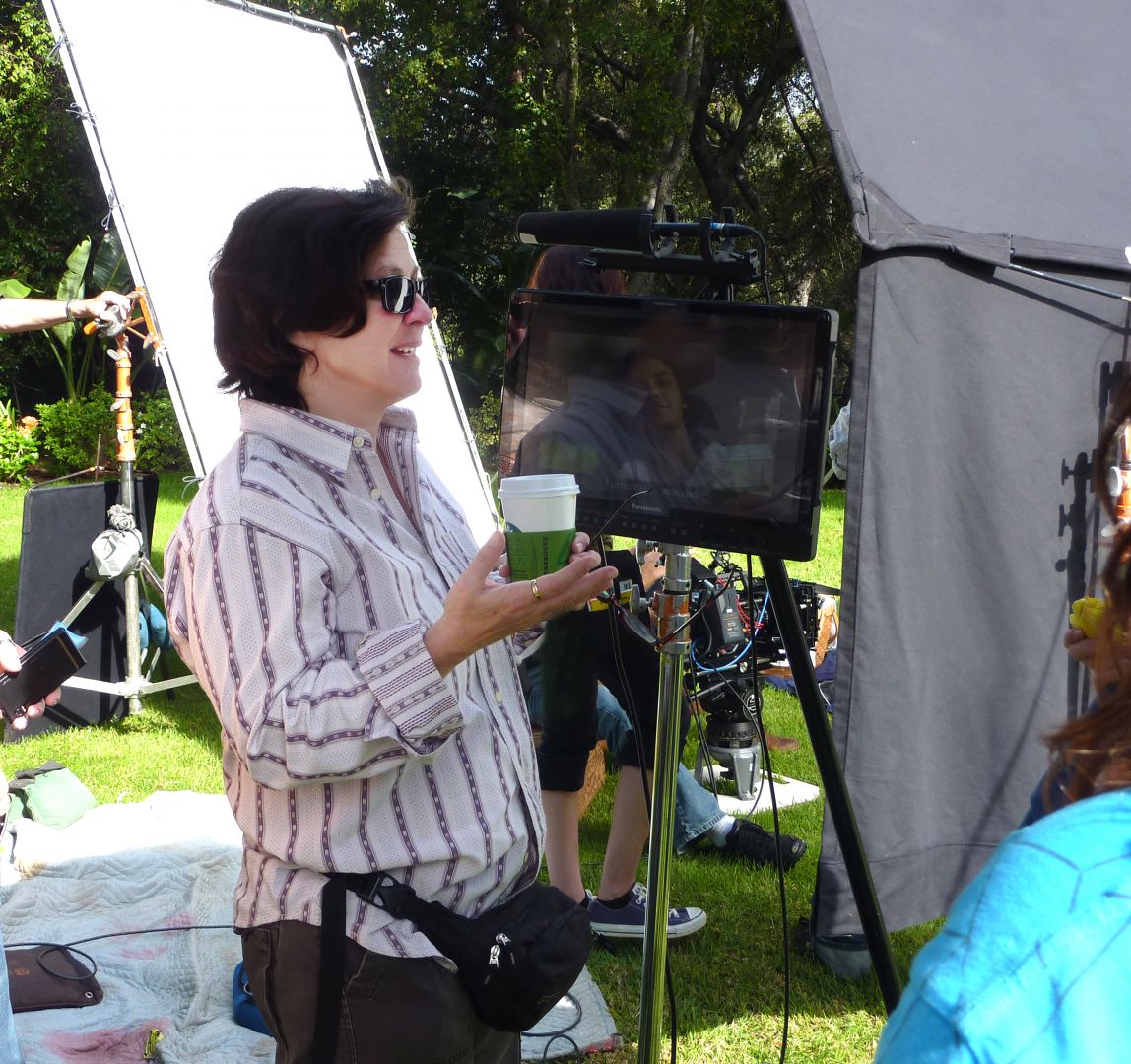 Any places to eat or things to do that you can share with our readers? If they have a friend visiting town, what are some spots they could take them to?
Okay, so we would have to go to Aroma’s in Studio City to have lunch because every important meeting I’ve ever taken has been at this incredible “in” hangout (you’ll see a lot of TV actors and folks in the biz there). Angelino’s off Sunset on the 405 is one of the best kept secrets where I take folks. They have quite good basic California fare up on it’s highest floor where you are met with spectacular views and no-one’s ever there! We’d drive up the 2 National Crest Hwy for some excellent views. Also take them up to Pine Mountain – another best kept secret – in fact so good that that’s all I will say!! But it’s where I shot “More Beautiful For Having Been Broken” and it’s stunning! 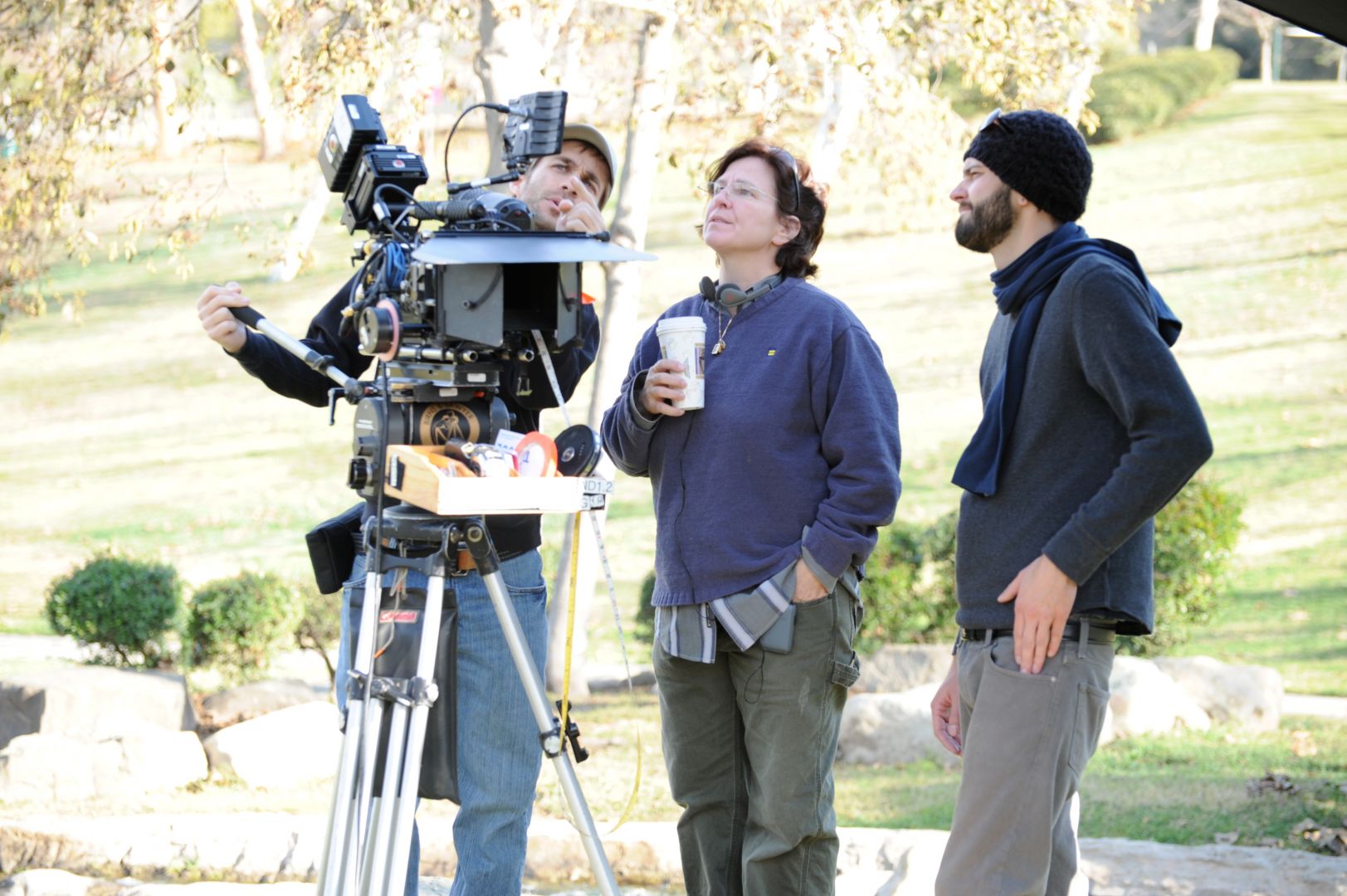 Shoutout is all about shouting out others who you feel deserve additional recognition and exposure. Who would you like to shoutout?
I would love to dedicate my shout out to my Nicole Conn Films Crew — Lissa Forehan, Rachelle Goodness, Sallyanne Monti, Claire Sturdevant, Amy Fritz, Yvonne Petersen, Liron Cohen & Mimi Torchin, Romina Will, Doc jo, Storm, Tara Allison, Val Baudier Reiter, Cindy Moors, Sara Hawthorne, Susan Brittain, Val Shella George, Naomi Bennett, — All of these lovely ladies work on behalf of creating quality content for lesbians the world over and not for money but for the love of the cause. Further I’ve had dear pals Kate Chilton, Henry Glowa, Shannon C. Hensley help me face all my legal challenges. And for love and encouragement I must thank my dear Mommo, whose my biggest fan, my daughter, Gabrielle who always keeps me laughing, my incredible son who makes me grateful for every moment and, last, but not least, my fiancé, Michaela Maree, who fills my heart, sees my soul and makes ALL the difference.