We had the good fortune of connecting with Penelope Lawson and we’ve shared our conversation below.

Hi Penelope, we’d love to hear about how you approach risk and risk-taking
When I decided to move to Los Angeles from New York nearly five years ago, I was definitely frightened. I was leaving my family, friends, and everyone I’ve ever known back home on the east coast. I’d visited LA before, but moving was a bit of a culture shock. It was a huge risk to move out here fresh out of graduate school at NYU Tisch and decide, “hey, I want to pursue being a film writer, director and producer full time,” because the film industry is such a difficult industry to break into. But I knew what I wanted and I went for it. Because I believe in my vision I think that has contributed a lot to my success. Taking risks to achieve goals required me to be courageous because everything was so uncertain. But I knew, no matter the outcome, the process would make me become more resilient and gain confidence in myself and my abilities. Through risk we create massive learning experiences and opportunities for ourselves. I think the trouble is that so many people view tasking risks negatively because they’re unsure where the journey will take them, and for me, there’s strength in that entire process. There’s power in being uncomfortable. And it was because I took these chances that I was able to make my first feature film, and from there my career began to take off. 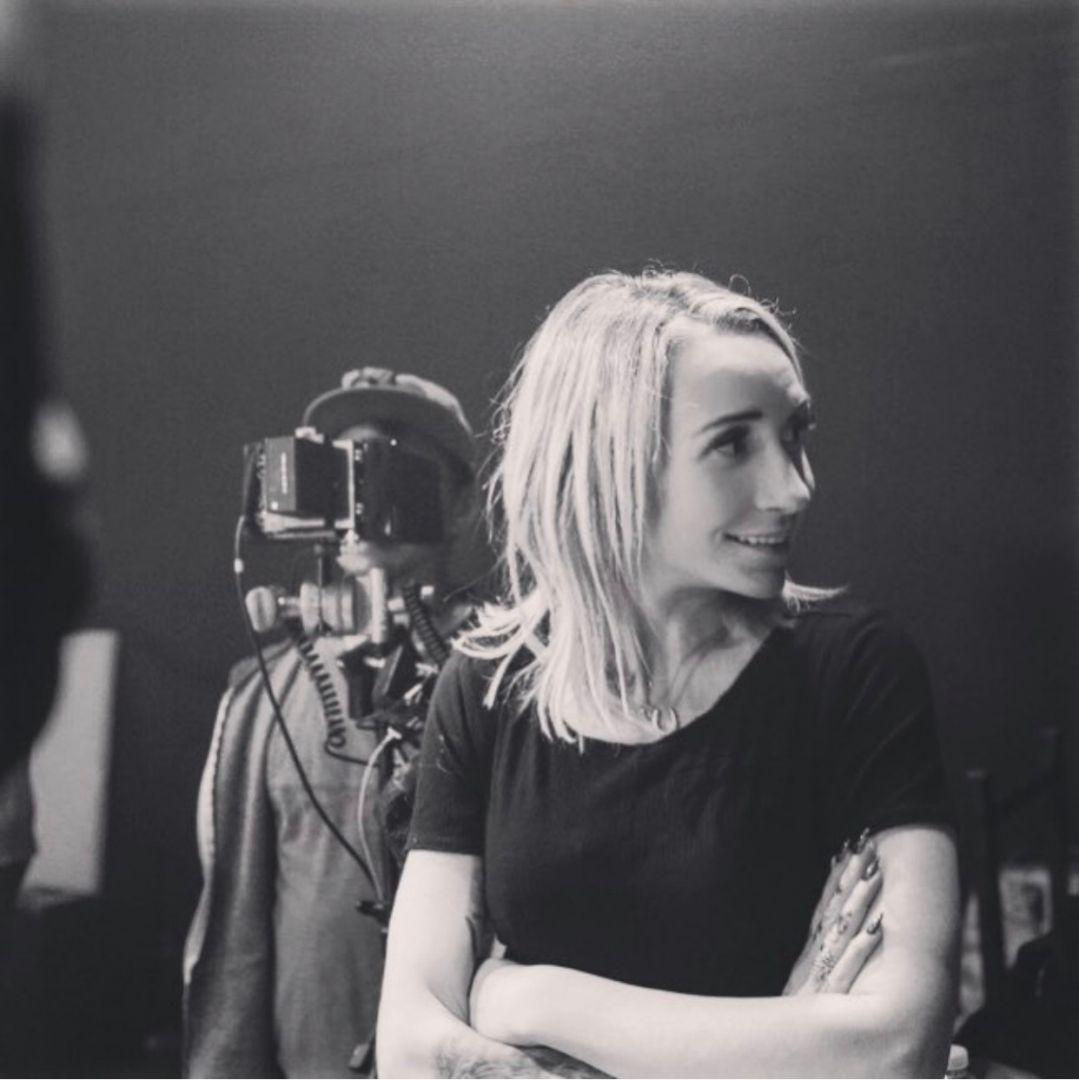 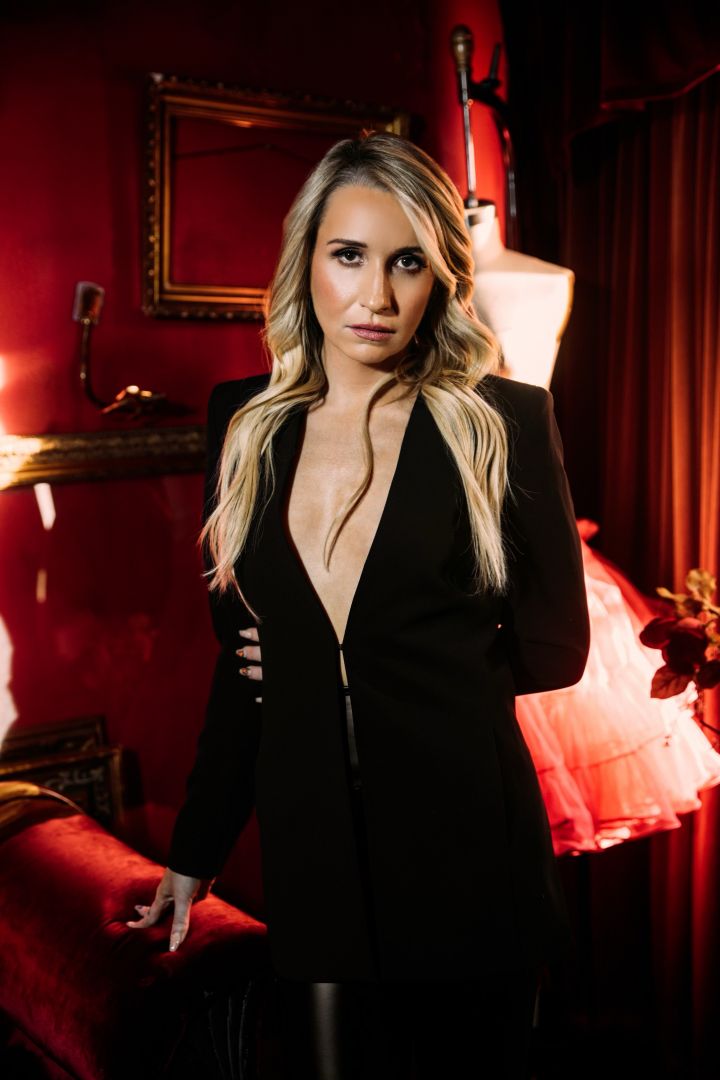 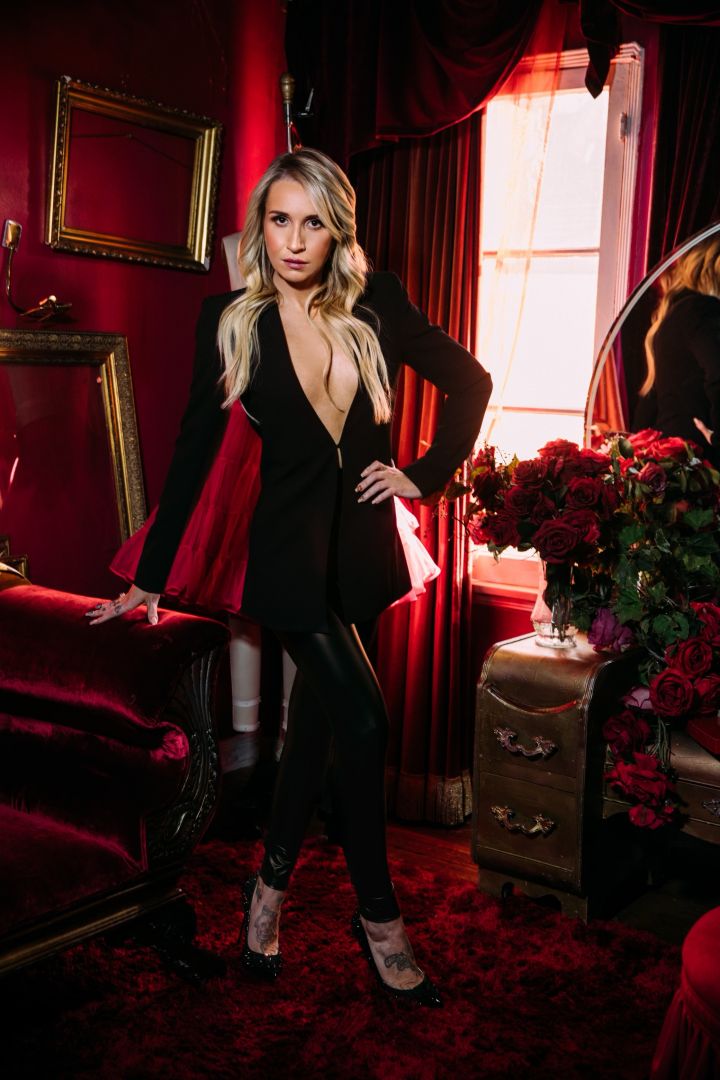 Can you open up a bit about your work and career? We’re big fans and we’d love for our community to learn more about your work.
I’m a director, producer and writer hailing from New York City, but I have been living in Los Angeles for the past four and a half years. During my final year of graduate school, I started my own production company, Pink Revolver Pictures. When I moved out here, I decided I wanted to make a feature film. I had made a series of short films when I was at NYU, including Numb (an official selection of Miami, Los Angeles Independent, and London International Film Festivals) and Wilde Eastern (an official selection of Cannes Film Festival and Tribeca Film Festival), an interactive VR Film written, produced, and directed by women. But I knew that I wanted to make a feel good film, something that reminded me of the movies I watched when I was a kid. So I sat down and I wrote my first feature, 1 Night in San Diego.

I grew up watching 90’s movies like Romy and Michelle’s High School Reunion, Don’t Tell Mom the Babysistter’s Dead, and Empire Records, and those films left a lasting impression on me. The female protagonists in movies like these represented a whole new way of women being depicted in comedy—they were strong, empowered women who didn’t care what others thought of them. I was determined to make a female buddy comedy that accurately portrays the life of the modern woman. I wanted to create a fresh, funny, high-stakes world where women could be just as potty-mouthed, reckless, strong-willed, driven and tough as men without having to apologize for it later. So much of female-driven comedy is that a woman finds herself because of a man. I truly hope that 1 Night in San Diego sends the message that a woman’s relationship with herself, as well as with her closest female allies, are what define her… not a romantic one.

I really wanted to make 1 Night in San Diego because I think it’s a fun, much needed comedy in a world that seems to be overly serious, divisive and dark these days. I never anticipated the amount of success that the film would generate, or that it would end up on Hulu (where it sat in the top ten for a few months!). I was so excited to work with some incredibly talented actors and artists like Jenna Ushkowitz (Glee), Laura Ashley Samuels (Modern Family), Eric Nelsen (1883) and Alexandra Daddario (White Lotus) among others.

In fact, Jenna and I got along so famously that when she approached me to write a short film for her to direct I jumped at the opportunity. We shot her comedy film, The Dinner Party, last year, and it is now making it’s run on the festival circuit.

Currently, I’m developing a feature film with Laura [Samuels] that’s another female buddy comedy with a dark edge, and also working on a feature comedy that I wrote and will be directing later this year.

I have also recently joined the board of directors for an organization “Boo2Bullying” that is dear to my heart, and I will be writing and directing some short form content for them this year to get the word out for this extremely valuable cause.

Filmmaking isn’t an island and I think it is very much a collaborative process. I am truly grateful to everyone who believed in me and my work, and I think everyone could use a laugh during these trying times.

Let’s say your best friend was visiting the area and you wanted to show them the best time ever. Where would you take them? Give us a little itinerary – say it was a week long trip, where would you eat, drink, visit, hang out, etc.
Being a fitness enthusiast, I almost always take my friends who are visiting me on a hike. There’s some incredible spots here in LA to break a sweat and see some stellar views– Runyon Canyon (I always do the back side because it’s a little bit harder and then go down the paved trail), Fryman Canyon, and Griffith Park are some of my favorites.

I went to culinary school before I became a filmmaker, so I definitely appreciate good food. For dinner, I love Spago, Il Pastaio, and I also love Merois (Wolfgang Puck’s new restaurant). Recently I’ve also been exploring some of the restaurants in the Valley and have discovered gems like Oasis (it’s the crab pasta for me), Petit Trois, and of course, Casa Vega.

I love cute lunch spots and have been grabbing sandwiches from Carla Cafe since they opened at the beginning of the pandemic. Their chicken pesto sandwich is delicious, and perfect to bring with you on a hike. If it’s the weekend I am also a big fan of ordering breakfast to pick up at Dialog Cafe (their sausage sandwich is chefs kiss) or Hank’s deli (some of the best bagels I’ve ever had).

And I guess I wouldn’t be a true New Yorker if I didn’t say that LBK Pizzeria and Pizza Wagon of Brooklyn are perfect for my weekly pizza fix!

Despite all of these decadent suggestions, I keep things relatively healthy, so I definitely love to stop in Erewhon and grab one of Erewhon’s to go sandwiches or salads and a turmeric latte.

I’m very interested in spirituality, crystals, astrology and tarot, so I would definitely take my friends to the Psychic Eye Bookstore, Eat Read Love on Ventura (it’s the newly opened store of my favorite YouTube tarot reader Sal), House of Intuition or Crystalarium. Also, growing up I loved to explore bookshops in my downtime and the Last Bookstore in Downtown is a very cool place to go and check out if you haven’t been.

There’s also some very fun concerts spotlighting up and coming artists at Bardot, which is always a great place to go and check out emerging artists.

This also might be the most touristy thing I’ve ever said but I just love going to Universal Studios, particularly their film tour. They always show you a new film set of a popular television show every time that you go on the tour, so you’re always seeing something different. It’s really interesting to see all of the history in their props and film sets, and it’s a whole lot of fun (and you can grab yourself a turkey leg or a Butterbeer from Harry Potter world afterwards!) 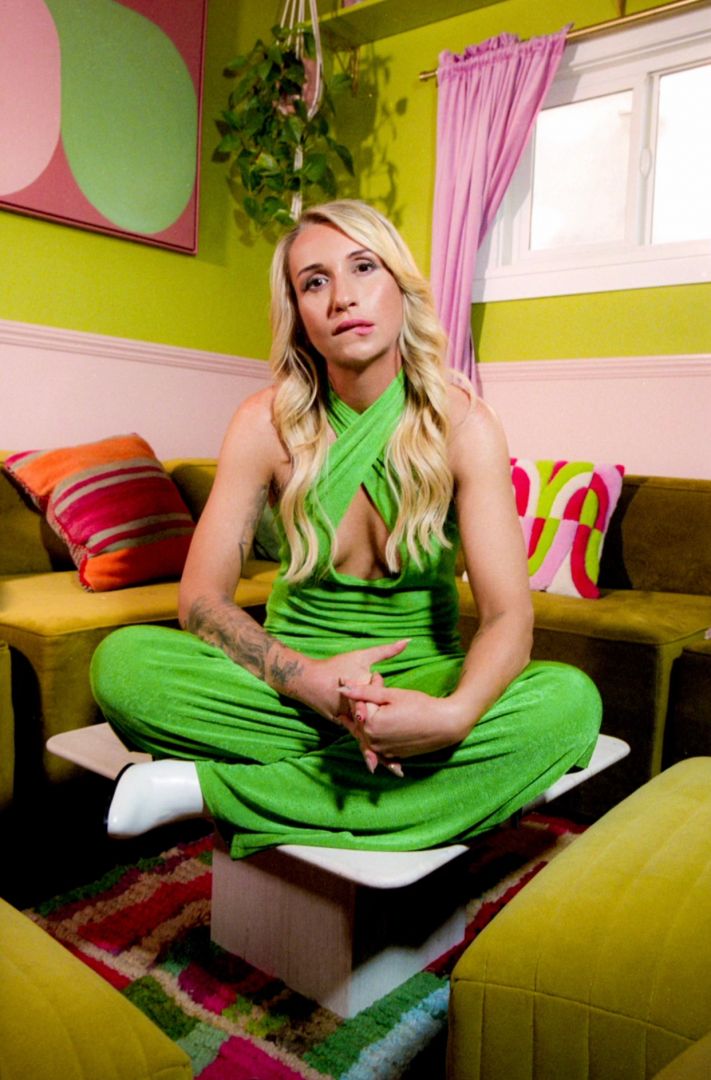 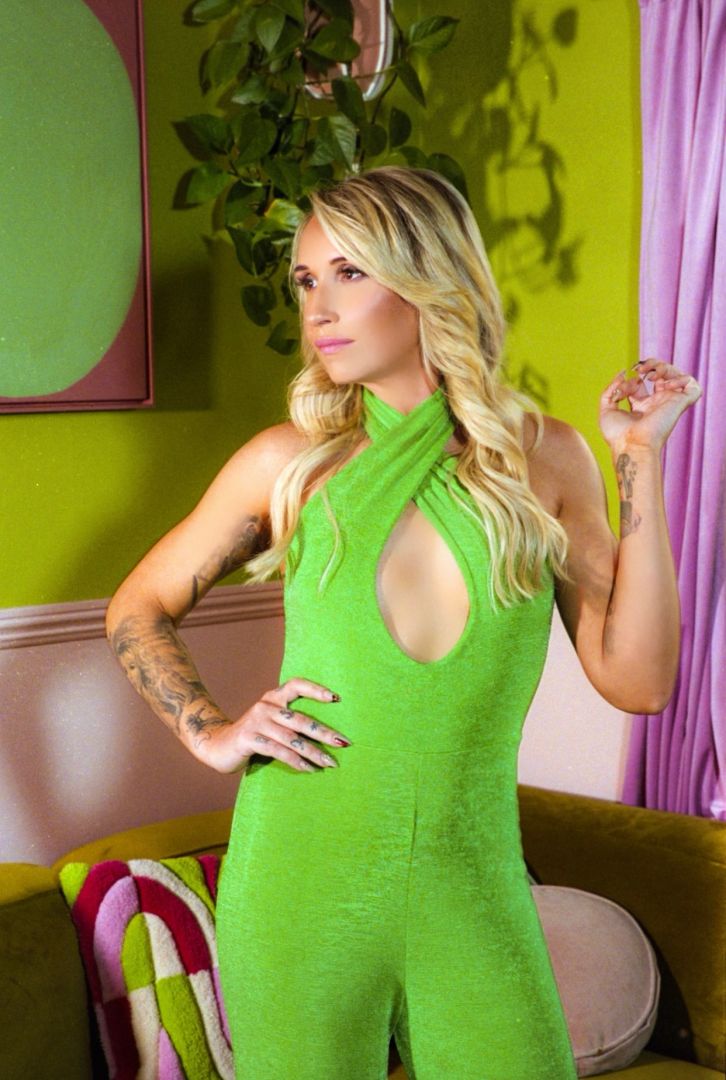 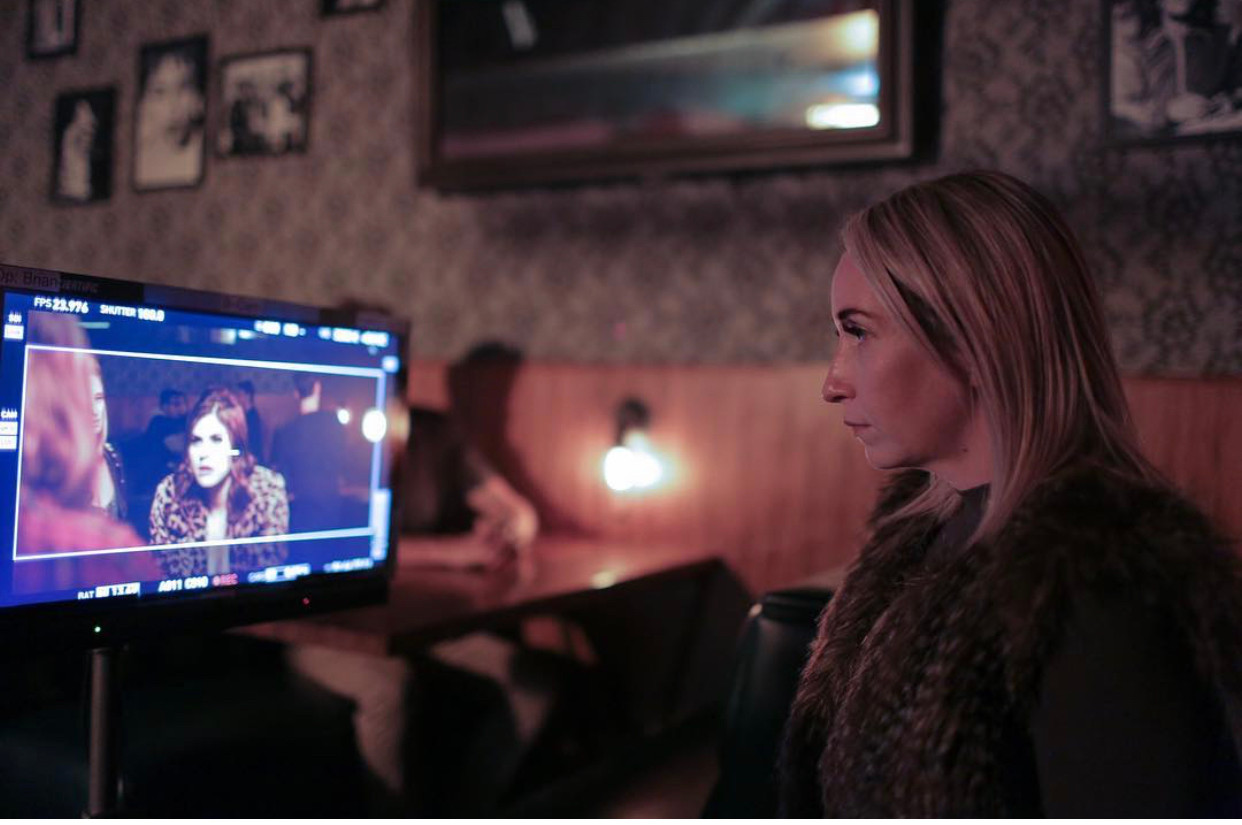 The Shoutout series is all about recognizing that our success and where we are in life is at least somewhat thanks to the efforts, support, mentorship, love and encouragement of others. So is there someone that you want to dedicate your shoutout to?
I would love to give a massive Shoutout to my parents, who have always supported my artistic journey and never stopped believing in my dreams, even when sometimes I wavered or felt unsure. They have been movie buffs for as long as I can remember, and exposed me to many diverse types of cinema, and I really appreciate all of their positive encouragement and support of my ideas. I think it’s also important to recognize all of my professors at Fordham University in New York City where I completed my undergraduate degree, especially James Grimaldi and James Fisher, who really gave me the confidence to write my stories, to read them out loud with other people. They truly provided me a safe space to learn the basic foundations of filmmaking. Because I have always written a different style of content than my peers, they made me feel comfortable beating to my own drum like that was something to be celebrated, not shy away from. They also taught me not be scared to write comedy, in addition to drama. Finally, I would also like to give a Shoutout to the NYU Tisch community where I received my masters in film directing. I met some truly incredible people there from all over the world, and I believe it was there that I gained a lot of the on-set experience that was required in order to really learn the ins and outs of my job properly.