We had the good fortune of connecting with Robbie Adkins and we’ve shared our conversation below.

Hi Robbie, what role has risk played in your life or career?
I started out life with optimism which ironically came from my father. Ironically because at a young age I wanted to be a scientist but he would not allow such a thing. I was to be a wife and a mother so it was OK to study art because that would come in handy. But in every other way, he taught me that if I made up my mind to do something, I could do it. Some things I did early on: In college I entered the Mademoiselle Magazine Guest Editorship contest and won a month in NYC working on the magazine. Upon returning to California, I married an experienced sky diver and took up the sport, eventually participating in a world record made with all women. Next we took up hang gliding in the beginning of that sport and I was the only woman to qualify to compete in the nationals in 1974. All those accomplishments were supported by my parents. It was OK with them because, most importantly, I was a married woman. 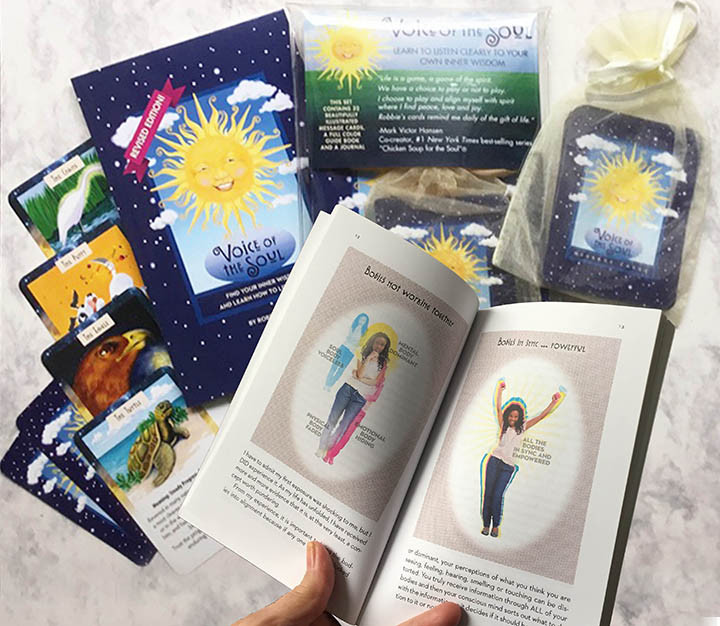 Alright, so let’s move onto what keeps you busy professionally?
I received a BA in Graphic Communication, but my early work was supporting our Hang Gliding business. I resisted “fine art” as success in that field seemed so subjective. I took every opportunity to grow my skills, taking on projects that I didn’t really know how to do, but figured out as I went along. I became a successful Graphic Designer and Illustrator, winning many awards. But along the way I was also developing spiritually, so much of my personal art is very spiritual in nature. I just love creating things that make people feel good or expanded. All kinds of art, from watercolor constructions to pillows with messages. I also created a deck of message cards, based my experience using the I-Ching in my 20’s. The cards and book are called “Voice of the Soul” and that is what I am most proud of. I have developed or designed a lot of different kinds of products over the years, but this is the truest expression of me. I am currently having an App made of it that will be available in the next couple of weeks. I had an App made of it 10 years ago that just enabled you to draw your message card. The programming of that version went out of date, so I am doing a new version now that has many more features. It has a guided meditation, a journal to keep notes about the cards you draw, and of course you can draw a card. The purpose of it is to help people develop their intuition. I also currently design books for a publishing company and I love doing that too, as they are stories about old movies, actors and actresses, and TV shows. I love their stories, how they had success and failures. I would not say it has always been easy for me, but I have that determination that my father taught me, determination that if I made up my mind to do something, I could always accomplish it.

Any places to eat or things to do that you can share with our readers? If they have a friend visiting town, what are some spots they could take them to?
I had a friend visit from New York over last Christmas. We went to the Getty Museum in LA, also I hosted a dinner party for friends that would have things in common with him. I love to host parties and bring people together. Another time two girl friends came and we went to the local spa, had massages and jacuzzi, then went out to a fun restaurant in town. When my niece came I took her to the beach. I love going to the ocean. We also have many great wineries in this area so it is fun to take people on a wine tasting tour.

Shoutout is all about shouting out others who you feel deserve additional recognition and exposure. Who would you like to shoutout?
My first husband supported my sporting adventures. He paid for the equipment and encouraged me to jump out of that airplane and fly off that mountain. He had personal issues so after 7 years with him, I left him. The next 14 years I was single, dating all the “wrong” men until I found a good therapist. After that I met my second husband who really believed in me as well. By that time, I had a very successful career as a creative director for a corporation. But most importantly, I have had the support of many amazing girlfriends along the way…all along my path. As time has gone by, I have more and more amazing friends, and have dropped the ones that weren’t really supportive. I resisted women’s groups because I thought of my mother and how much she judged and gossiped about other women. But in time, I have learned that women who support each other are the very best gift one can have. I can’t name just one, but I have to say there are at least 20 that have been and continue to support my success.