We had the good fortune of connecting with Evan Chambers and we’ve shared our conversation below.

Hi Evan, what role has risk played in your life or career?
Choosing to take the career path of an artist is highly irresponsible. I knew this when I started on the path, so risk for me has always been part of the equation. Now as a parent and partner, the same type of risks take on a new level of responsibility. The stakes are higher, and directly affect other people. Knowing when, where, why and how to make choices that will inform future projects and in what ways those choices will ripple through my life are survival skills. The big difference in the evolution of risk is the confidence that comes with having risked for so long. I know how to recognize my own failures and move through them patiently and I’m proud of the skills I’ve collected that have so far allowed me to land on my feet. This experience has given me the freedom to take risks without risking it all. I recognize that without risk, art becomes replication and then by its true nature is no longer art. 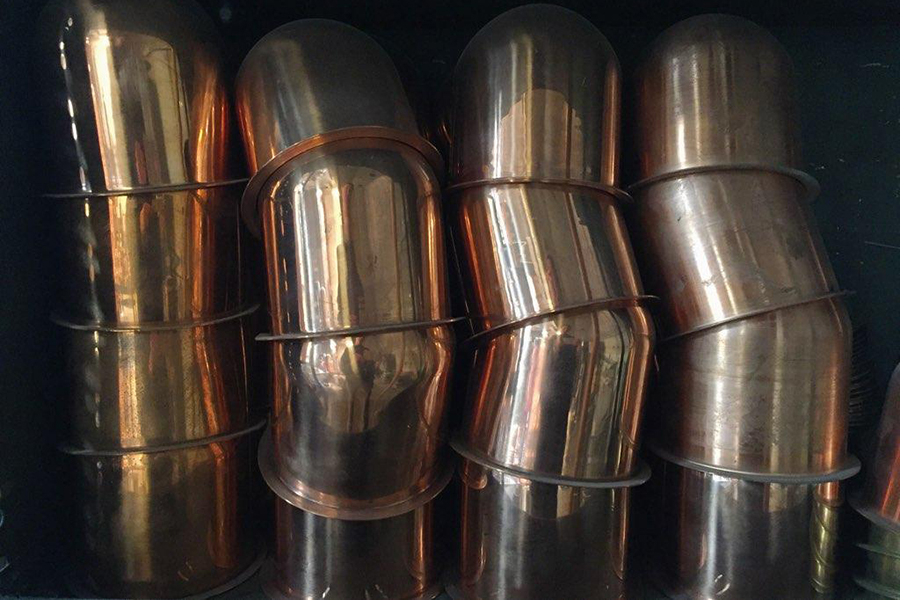 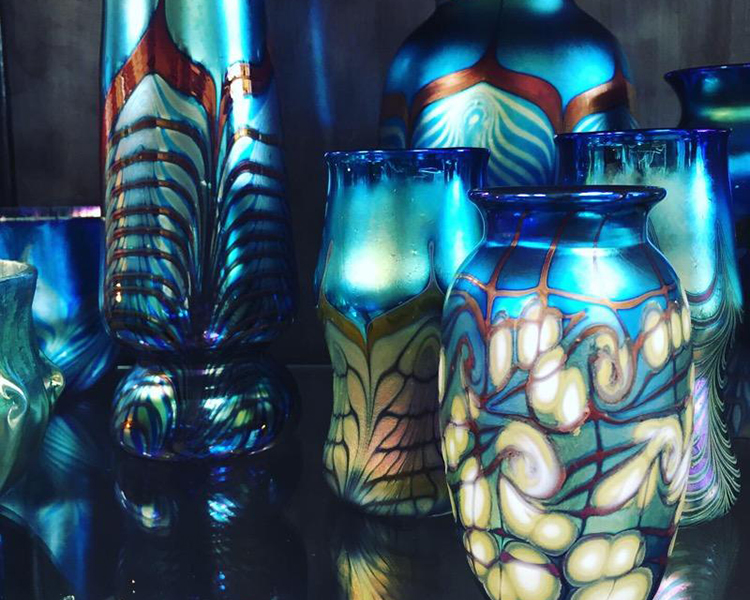 Please tell us more about your art. We’d love to hear what sets you apart from others, what you are most proud of or excited about. How did you get to where you are today professionally. Was it easy? If not, how did you overcome the challenges? What are the lessons you’ve learned along the way. What do you want the world to know about you or your brand and story?
I think what is most defining about my art is the blend of working with metal and glass together. If I were to have focused exclusively on only one of these mediums, my mastery would likely be more refined. But that exclusivity may inherently deem me more of a skilled craftsperson rather than an artist. I learned from people who were prolific in their craft. I have admired their skills with the recognition that I may never achieve their level of expertise. This might be because I want to try out new ways to manipulate and collaborate with other mediums. The way I use traditional techniques in metal and glass in non-traditional ways sets what I make apart. There was one point early on in my adult life where I ended up in a wheelchair for 1 year. The reason for being there was unknown but had something to do with chronic pain. Basic daily activities like tying shoes and brushing my teeth became impossible without help. Every doctor diagnosed me with something different that couldn’t be cured. Eventually I met someone who had been in a similar situation and he helped me recognize that the problem was not physical, but emotional. I was carrying around a lot of unresolved stress and once I worked through that, the pain which had forced me into the wheelchair subsided completely. That experience was the largest challenge I have ever had to overcome and the end result was my commitment to becoming an artist. 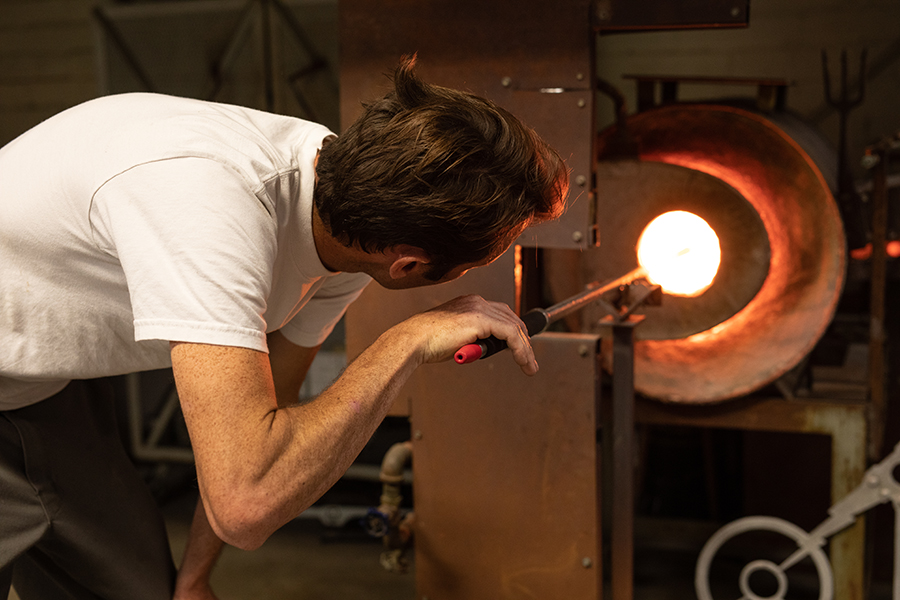 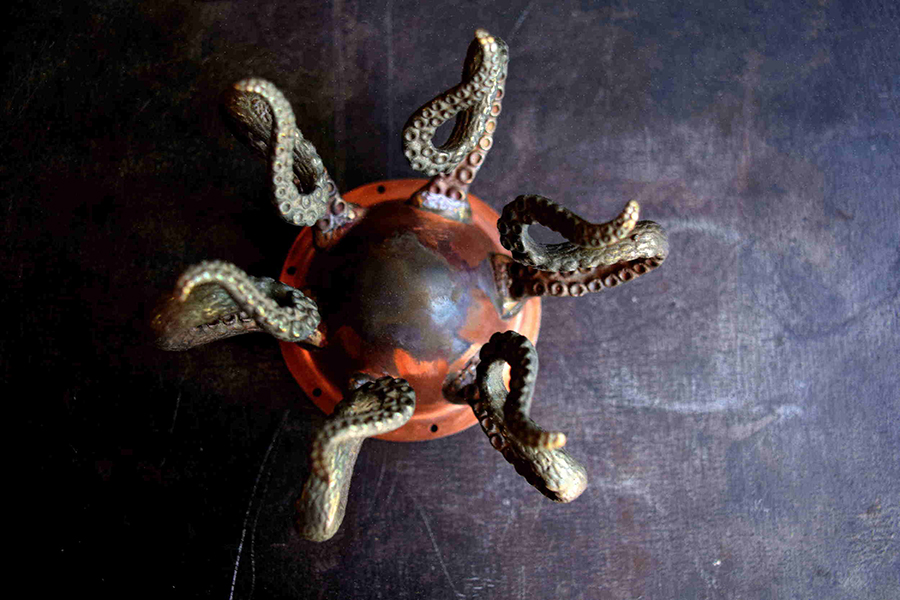 If you had a friend visiting you, what are some of the local spots you’d want to take them around to?
While my best friend was visiting me back in 2016, I figured that it was a great opportunity to explore the city by boat from the water. The LA river has never really been associated with boats. It’s usually associated with crime, graffiti and epic car chases along its empty 50 mile concrete culvert. I didn’t have a boat though – why would I since there’s barely any water in LA? So we “borrowed” a canoe Huck Finn style from an upscale drug rehab facility. This required climbing the barbed wire fence after dark and swimming across the duck-shit filled pond. We then portaged the stolen canoe over 6 miles and 3 chainlink fences to get it to the confluence of the beautiful Arroyo Seco and the mighty LA river (aka the 5 and the 110 freeways). Then, a necessary pit stop at El Atacor #1 in Highland Park to eat the best, and biggest burrito of my life. With full bellies and 2 paddles we set out down the river at 9 pm. The unusually wet winter made it possible to float with only minimal boat bottom scraping. For 30 miles we illegally floated down this under appreciated river. We silently went under freeway overpasses and street bridges. People cooked on small fires and stoves all along the river banks and washed their dishes in the 5 foot wide channel. In Vernon, the only “exclusively industrial” city in all of Los Angeles, the water began to stink. Once in Long Beach, we smiled in triumph after noticing the faint taste of salt in the water when we capsized the canoe for the third time. At the very end of the river we paddled across the harbor to the iconic Queen Mary. We gave a rap with our knuckles along its metal hull, then pulled the canoe out as we ended our night. It was 4 am and we were wet, shivering and feeling triumphant. This is undoubtedly one of the best times I have ever shown a visiting friend. While it can’t be replicated exactly, this would be MY idea of the best way to ‘check out’ this vast city of Los Angeles. 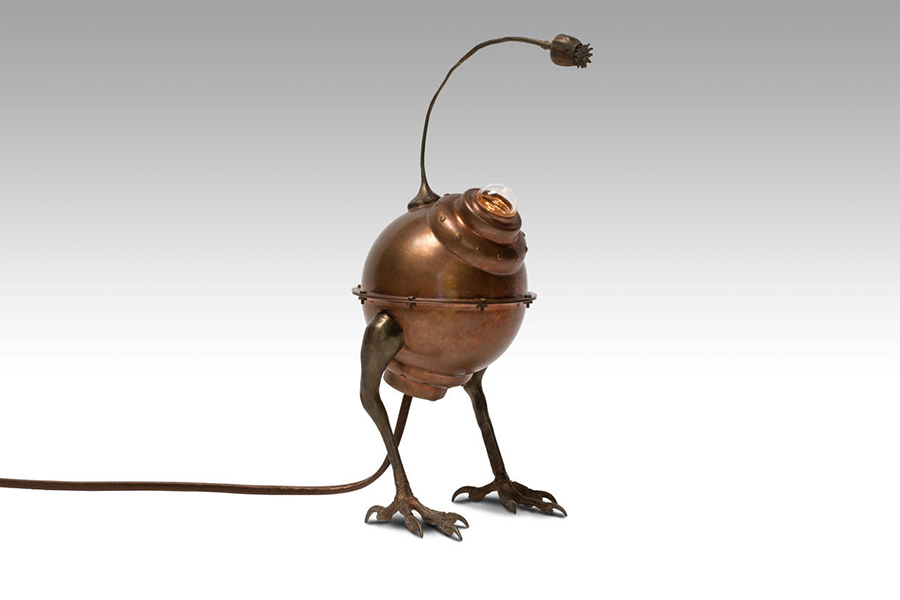 Alright, so let’s jump right in! The Shoutout series is all about recognizing that our success and where we are in life is at least somewhat thanks to the efforts, support, mentorship, love and encouragement of others. So is there a person, group, organization, book, etc that you want to dedicate your shoutout to? Who else deserves a little credit and recognition in your story?
When I was 19 I really wanted to apprentice under Fred “Sonny” Cresswell. He was a glassblower and equipment builder up in northern California. Another glass artist named Andy Paiko had gotten his start with Sonny and the results were astounding. Sonny was a frightening person though. He had a temper and had kicked almost every other apprentice out of his shop and off of his 100 acre ranch. I put off asking him if I could come up and learn from him for years. I finally got the nerve at age 23 to call him and ask if I could help him for the summer. He gave me an enthusiastic “Hell yeah” in response. That summer and the next 6 or so following, I learned to mix, decorate and blow colorful art nouveau luster glass. He also taught me how to work with steel and build glass equipment. In 2011, after an epic battle with cancer, a group of us buried him under a layer of broken glass and soil in the local rural cemetery. Looking back now from age 40, I still marvel at how much my time with Sonny affected my life. He really gave me a technical advantage in everything I do that I wouldn’t have had otherwise.