We had the good fortune of connecting with Courtney Haynes and we’ve shared our conversation below.

Hi Courtney, we’d love to hear about how you approach risk and risk-taking
I believe the first thing that people must understand is that life isn’t meant to be lived in the space of sacrifice and conformity. Merriam Webster “‘n them”, states the definition of risk is, “possibility of loss or injury” – yikes! Or how about this one, “someone or something that creates or suggests a hazard”- that’s heavy. When you truly think about it, that’s a very compromising way to live life. The fear of taking “risks” is the beginning of an endless cycle of why people make the decisions that they do: which leads to sticking and continuously teaching the safe route of live. and they take and teach the safe route.

When I’m performing and I didn’t deliver my set as planned, I don’t look at it as a “bad’ thing. It’s just an opportunity for me to learn from and do better next time. If one of my jokes didn’t land, ok well, I’ll just have to revise my material and deliver it differently next time. As a comedian, I’ve applied a lot of concepts in stand up that I have in life in general. In standup, you can’t live in the mistakes of the past- you have to keep moving. If one of my jokes didn’t land. Just pivot and keep the show going.

In my mind, I don’t create a space where the word risk is even true. Will life present challenges? Absolutely! Do you have to overcome different levels of difficulty to achieve your goals? Absolutely! Challenges and difficulties are only temporary. I think this is the difference between a life lead by fear and one who doesn’t adopt the concept of fear.. It all starts within the mindset. If you believe you can do any and all things, you will.

One of my most vivid childhood memories includes when my grandfather taught me how to ride a bike without training wheels. I was terrified of falling mainly because I didn’t want to fall and scrape my knees. My grandfather looked at me and said, “you can do this, Papa knows you can.” And the feeling that I felt in the moment, the empowerment, the belief was indescribable. I took that feeling and channeled it and rode my bike in circles several blocks straight without falling or stopping. It’s that feeling that I take with me at every turn in life. When something feels the most impossible, that’s how I know it’s absolutely possible. 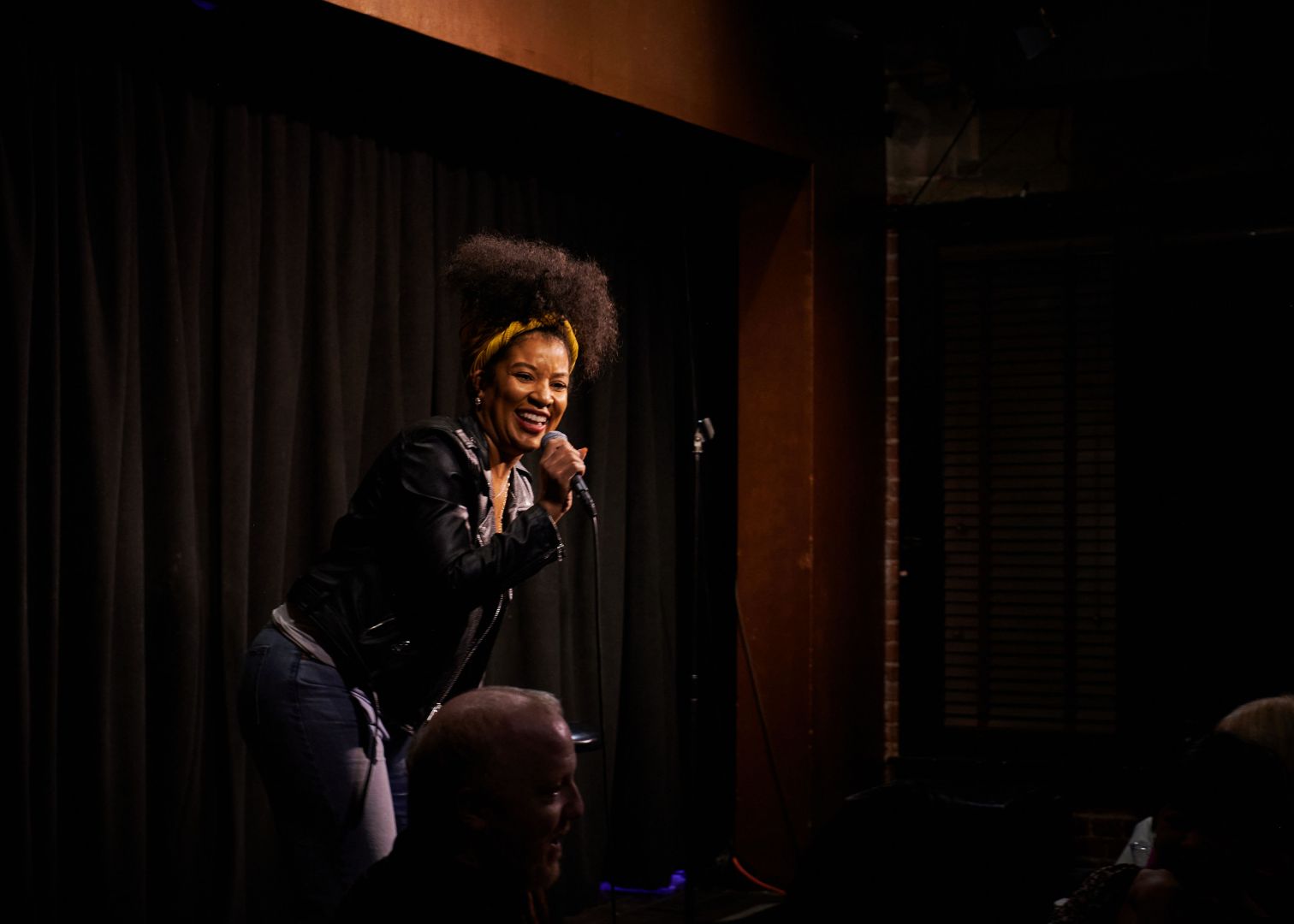 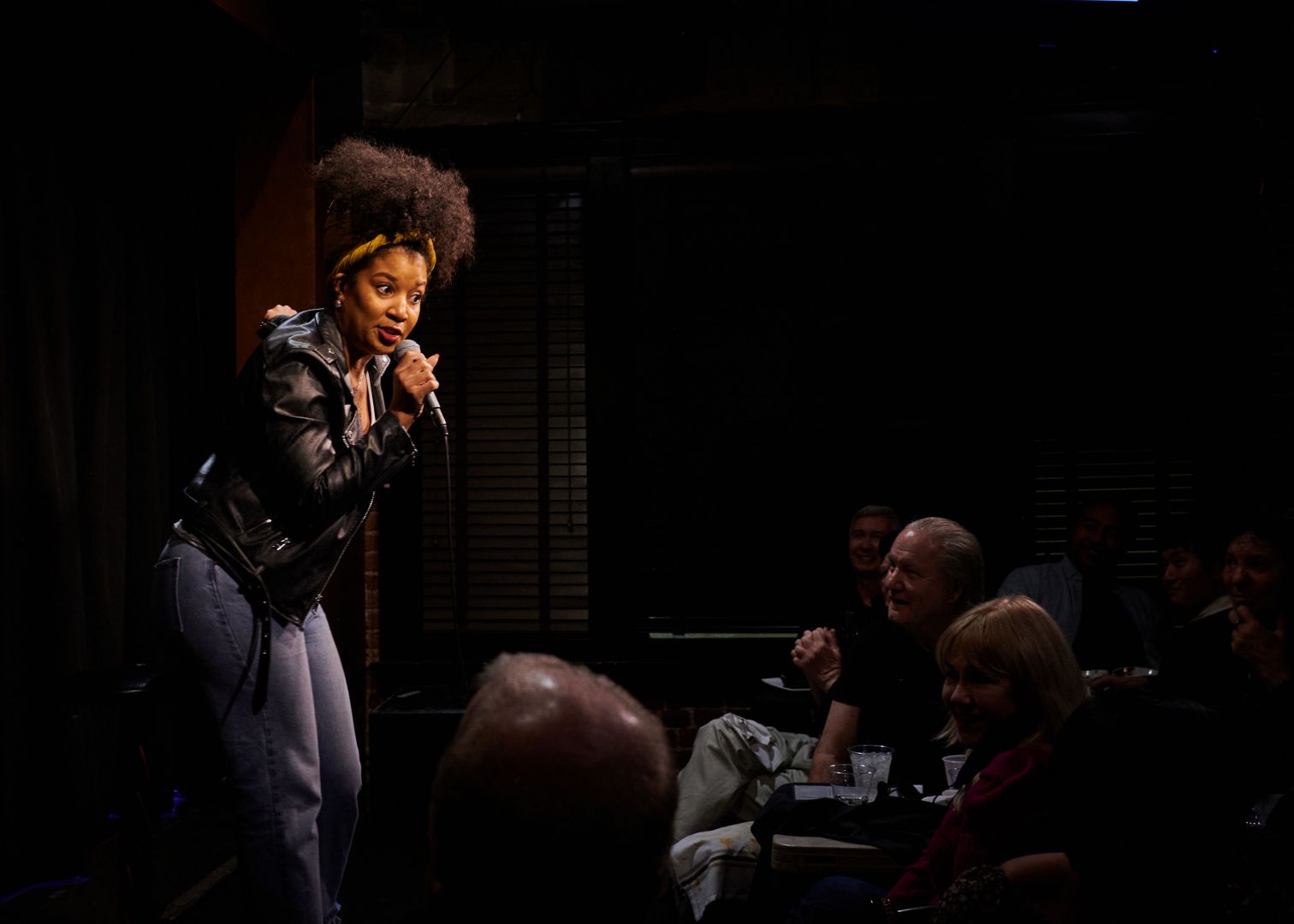 Can you open up a bit about your work and career? We’re big fans and we’d love for our community to learn more about your work.
At a young age I knew I wanted to be a stand up comedian, although I didn’t jump straight into comedy. The journey to the stage was long. I feel that a lot of people think, “I have to get into entertainment at a young age and if I don’t then I never can.” When I look at comedy, it has no age. My plan was to gain as much life experience as I could and turn that into my material so I had no plans of rushing into the craft.

I grew up in a small town, called Ponca City, OK. Yeah, try to the find that on a map. Knowing that I wanted to live a life as a comedian, but having to persevere through a mound of general life obstacles was difficult, especially when I felt that I was starting at the bottom- so to speak.

I chose to go about it patiently, but intently. Patience and trusting your path is the one life’s secret weapons. I moved away from home, went to college and found my “corporate purpose” until I knew the time was “right” to break into the field. With that, my career naturally laid open a path for me to pursue comedy, aggressively. I think we all have an inner being that guides us on what the right decisions are to make at that time. Listening to that is literally all of our compasses in life. “she” laid out all of my foundations, plans of actions and logistics for me and continues to do that today. For that I am forever thankful.

Choosing you at every turn in life is also a major key. Sometimes people may look at you crazy for choosing to get into stand up comedy, or deciding to lay your own path in life. The reality is saying “no” ,not letting others doubt get to you, and shielding all negativity in life is the key to staying in tune with yourself, and that’s truly the path to greatness.

Personally, mental roadblocks were the hardest thing for me to overcome. To be a stand up comic, you have to be resilient, self-less, and bold. It takes more than just courage to get on stage and share very intimate and real parts of yourself with people. It took me years to tear down those mental barriers, but in that process I realized the true power in vulnerability. A lesson I learned is that releasing self-doubt and fear or what others may think of me was my greatest road block, and it’s also the biggest obstacle for many others.

Now, I’m a just an authentically goofy woman who gets to share her light with the world. There’s no better gig than that. 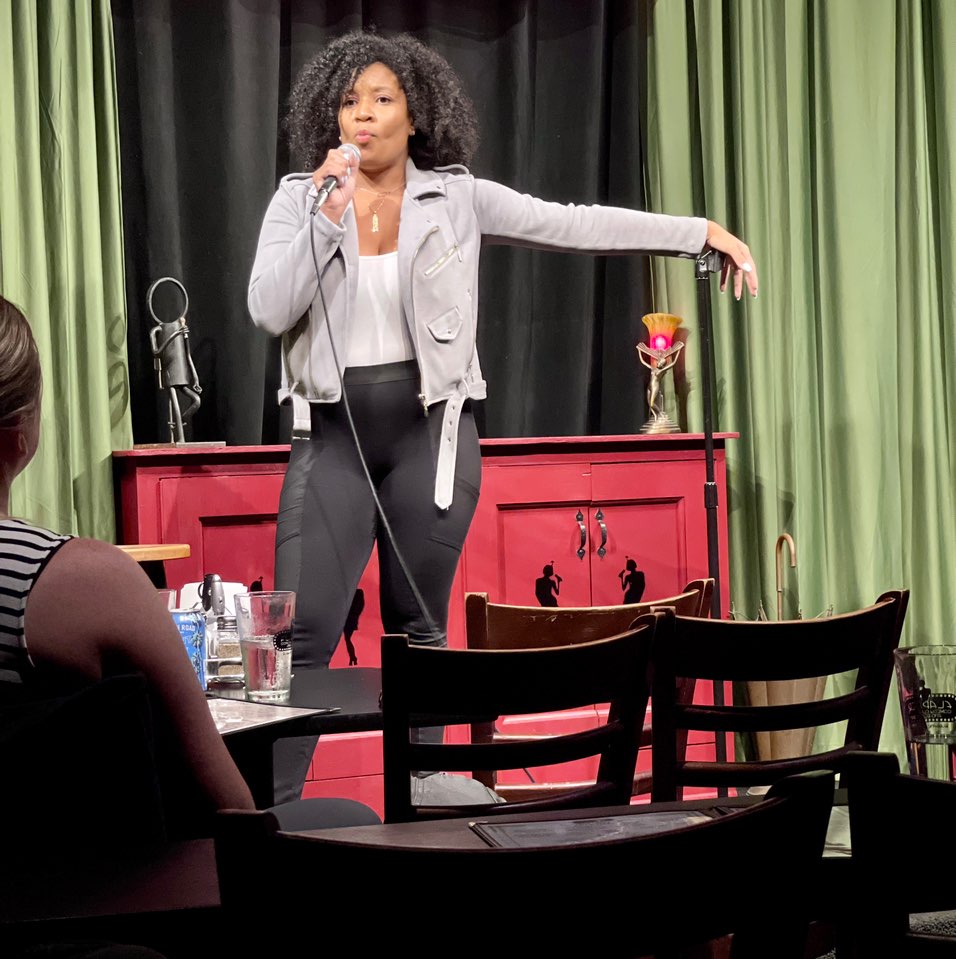 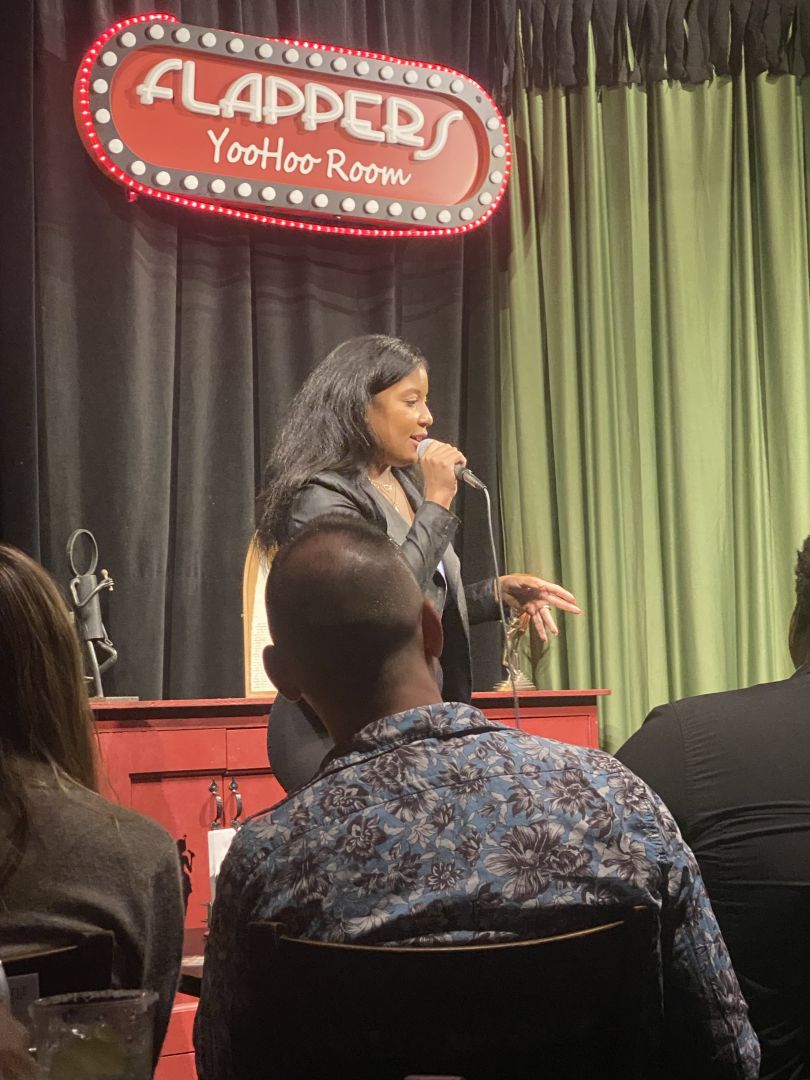 If you had a friend visiting you, what are some of the local spots you’d want to take them around to?
Oh man… for the best time ever, my stops are all about food & comedy! First up: some fantastic pastries from Portos Bakery on Magnolia after I pick her up from Burbank, because we all know LAX can do the most, so the homies gotta fly into Bob Hope! We’d have to hit up Pasta sisters! OMG great, fast homemade pasta. I would definitely at some point hit up The Serving Spoon in Inglewood. great soul food at this joint and the vibes inside are everything you want to feel while biting into a buttery waffle & catfish! If Obama isn’t on the wall and Anthony Hamilton’s “Charlene” isn’t in rotation, the grits ain’t good. I have a vegan Pho addiction, and semi weekly dependency on the fried tofu pho at “It’s Pho- Hollywood” on Cahuenga. Recently I’ve been really loving Pura Vita on Santa Monica. They have the best vegan Italian hands down! It’s so hard to master such a cheese friendly cuisine, and they do it effortlessly!

We’d most definitely would have to hit up Laugh factory for Chocolate Sundae’s on Sunday, Crack Em’ Up Thursdays every Thursday in the Belly room of The infamous Comedy Store. This show has been running for just over 18yrs and is produced by the fantastic Nichelle Murdock. We would definitely have to slide through other spots like, Flappers, The Hollywood Comedy, and more. There are so many local talented comedians that perform at many shows around town so really any show, you can find great locally produced comedy literally in any hood. 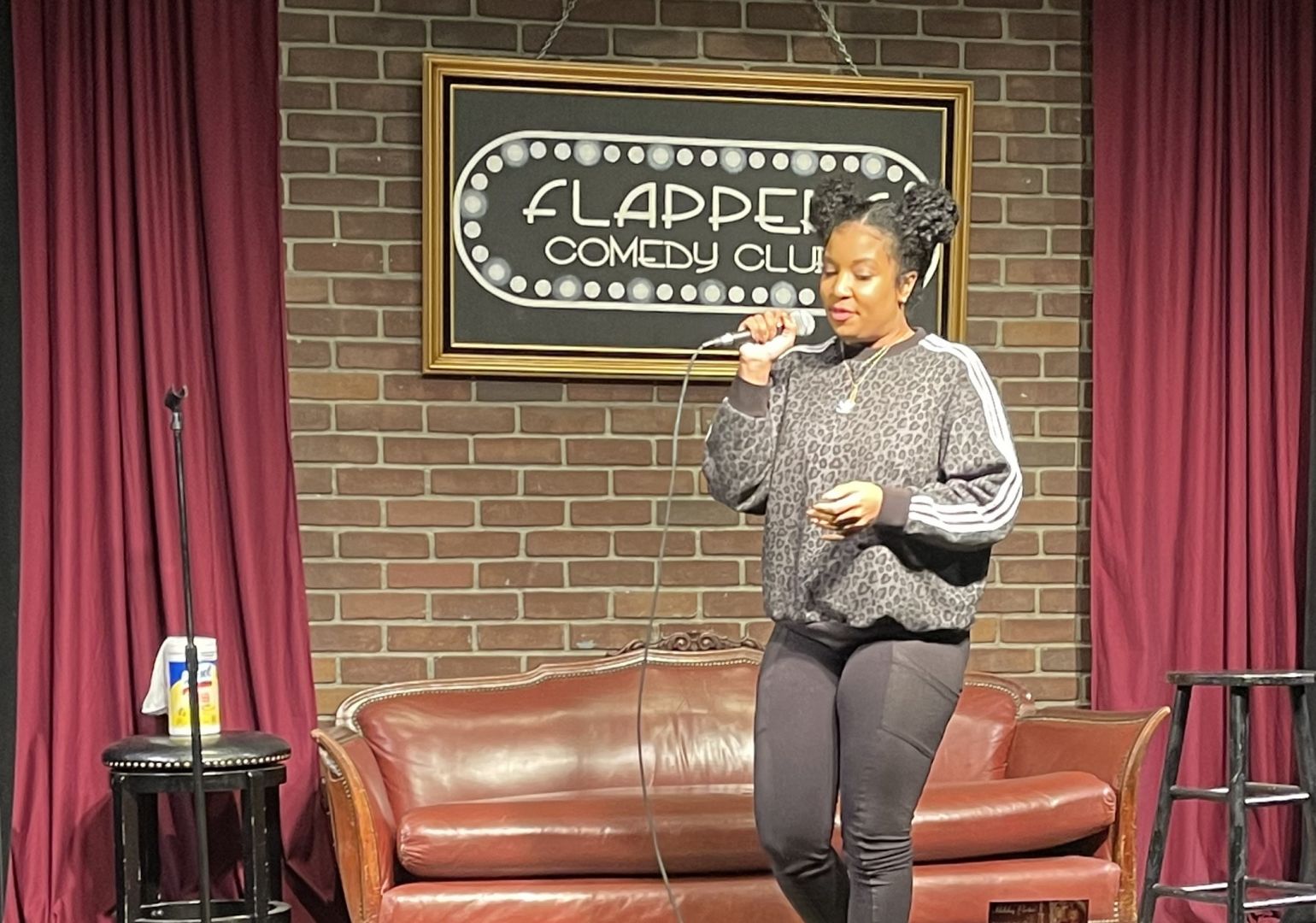 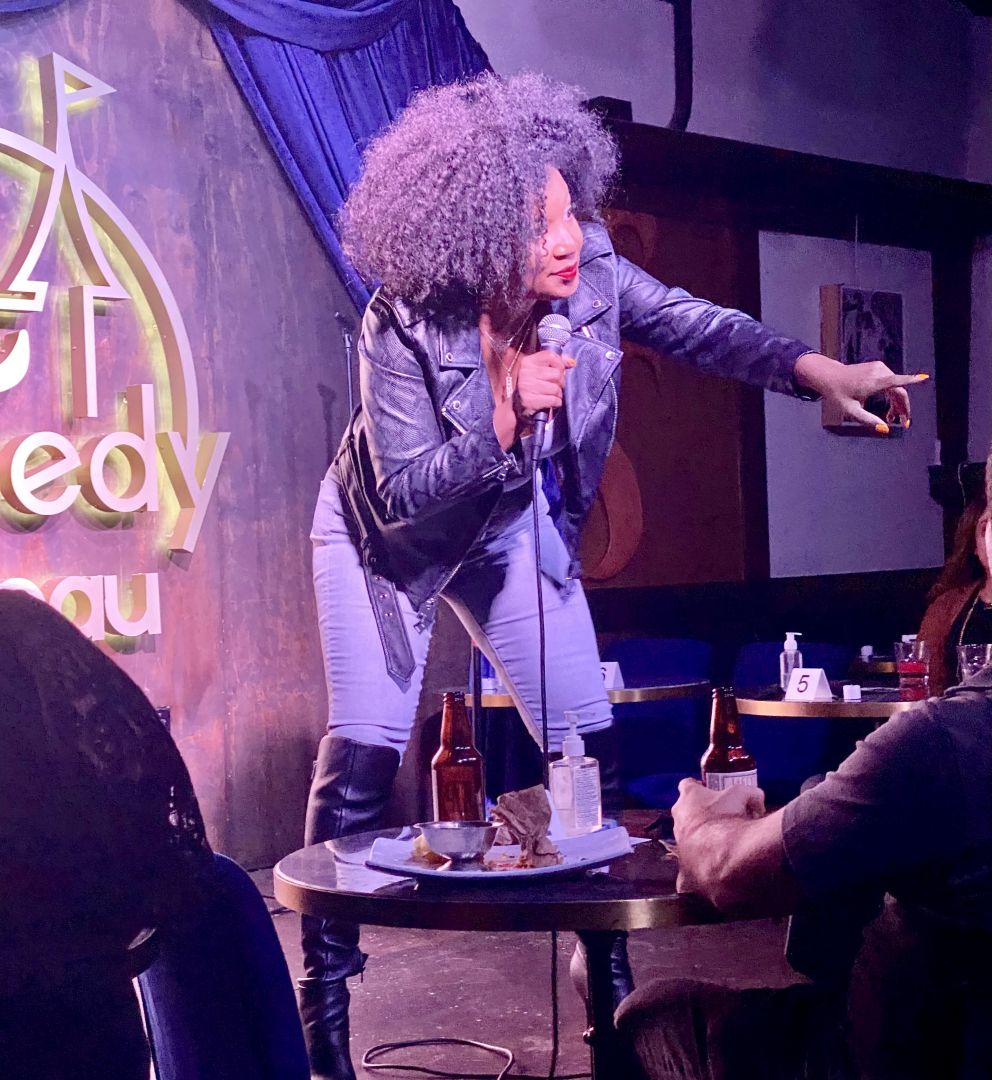 Who else deserves some credit and recognition?
I would like to give this shoutout to all of my fellow sisters in comedy and bookers who took a chance on me and saw the talent within me, even when there were times I doubted myself. Moving out to Los Angeles and putting myself out there in this industry was not an easy task to do, and your support made me feel welcomed. Specifically, I’d like to shout out Taquita Love who was my first stand up teacher at The Second City Hollywood and was the first comic to believe in my material. Thank you, Taquita! 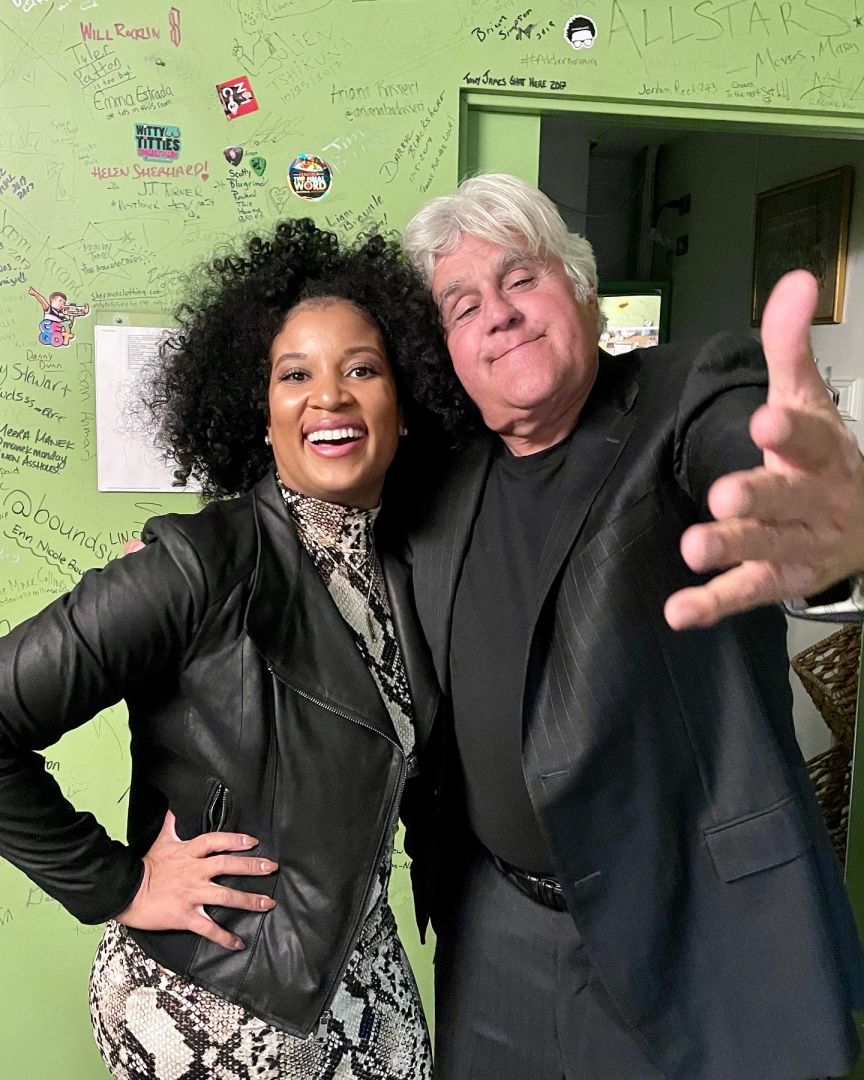 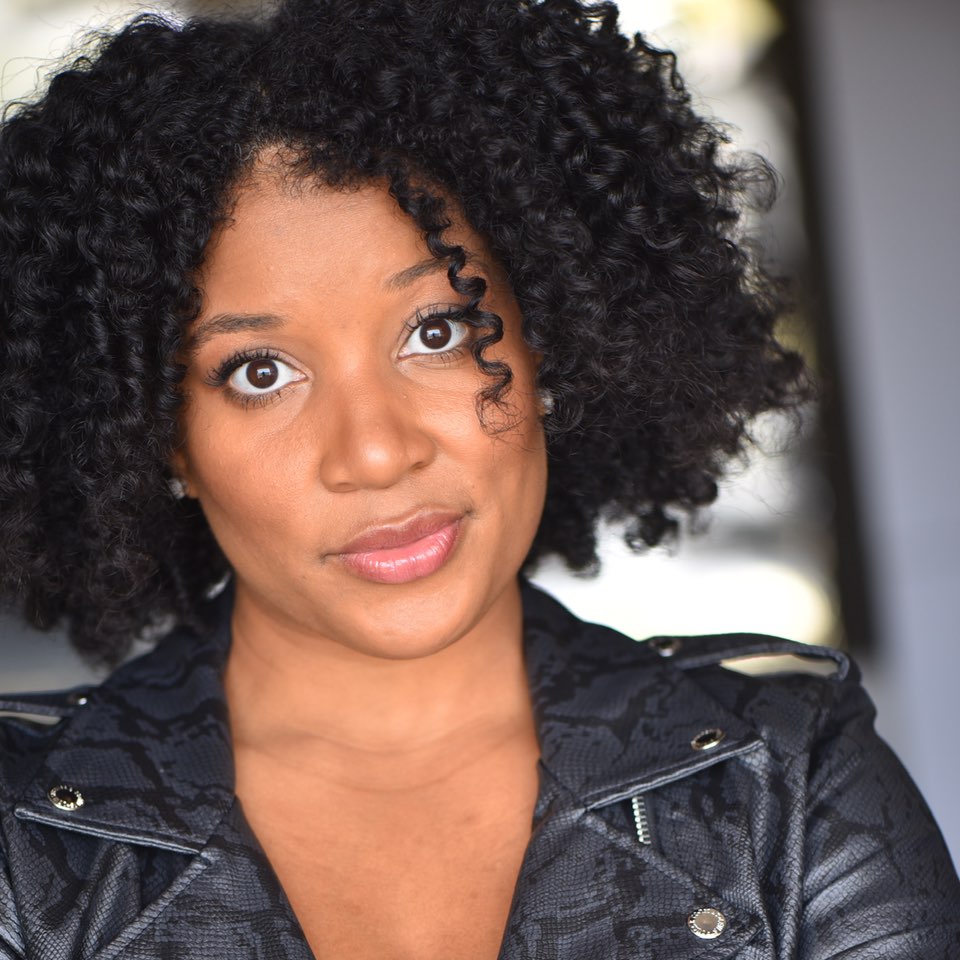 Image Credits
the headshot is from Robin Emtage photos. @robinemtagephotos on instagram. Not sure if that’s a credit credit but just in case!