We had the good fortune of connecting with Darrick Deshaun Ingram and we’ve shared our conversation below.

Hi Darrick Deshaun, why did you decide to pursue a creative path?
For me, art is the only thing that makes sense. Starting from as young as I can remember, I always carried sketchbooks and was compelled to capture everything that my eyes could see. Almost militant in my dedication, I would draw for 8 hours a day in my free time. When choosing colleges, I considered going into the medical field, as my grandmother who raised me was a home health nurse and taught me so much. Instead, my grandmother, Jessie Mae Williams encouraged me to pursue art. That led me to study 3D Animation and Video Game Design at the School of Communication Arts. This armed me with skills that have aided me in various positions, such as a Graphic Tee Designer for companies like JC Penny, A sign and neon artist/designer where I would create experiential signage for the likes of Peter Dundas and Uber, as well as an apparel fabricator and digital designer for Asher Levine where we have created costumes for the likes of Lady Gaga, Doja Cat, and Lil Nas X. Though I’ve had many other jobs in the past, I could never imagine myself leaving the creative field. 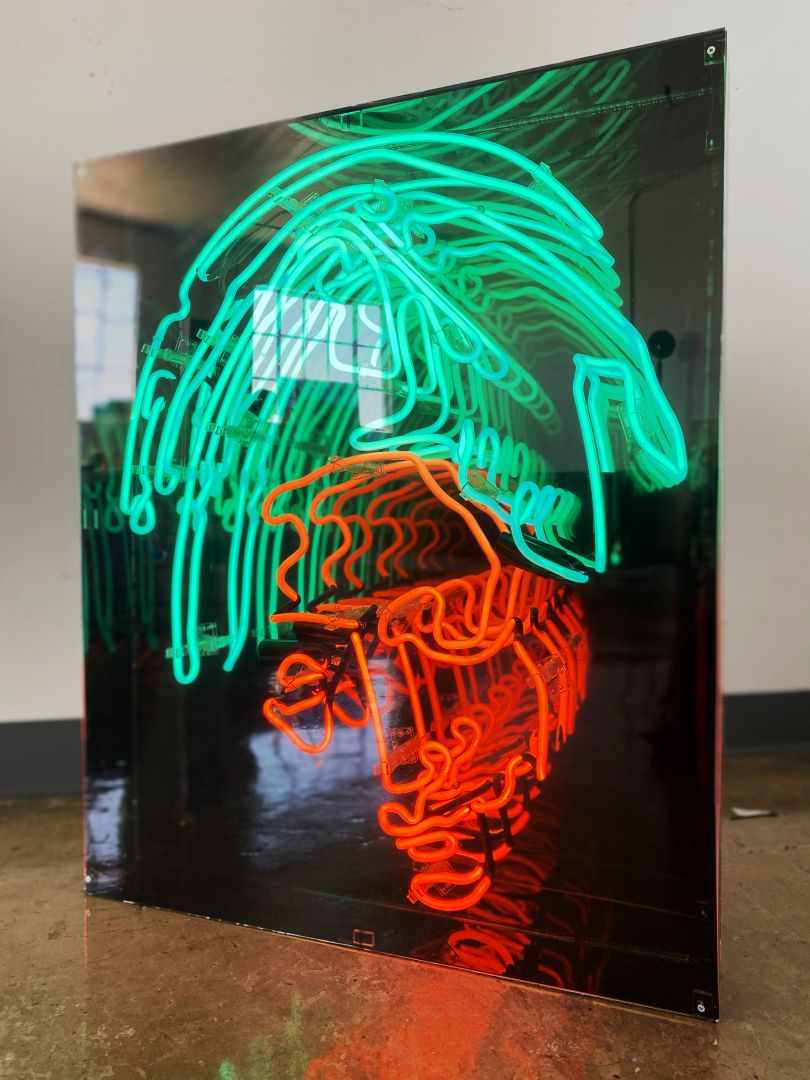 Let’s talk shop? Tell us more about your career, what can you share with our community?
Getting to this place is life has been a long path filled redirections that I could have never predicted. I have worked in the food service industry, in graphic apparel, residential carpentry, commercial interior remodeling, cabinet making, and so much more. I do believe that there is one thing, in particular, that sets me apart from other artist/business people: I never tell myself “no.” If ever there is something that interests me, I go for it. Especially as a creative. Currently my business produces custom signage/neon, neon artwork, Luxury street wear and accessories, as well as contracting for couture fashion projects. I hope to push further into set design and production for entertainment, jewelry, and one of my ultimate dreams would be to create designer furniture.
I believe that as creative people, we have one task while we are on this planet and that it is to create. Endlessly. 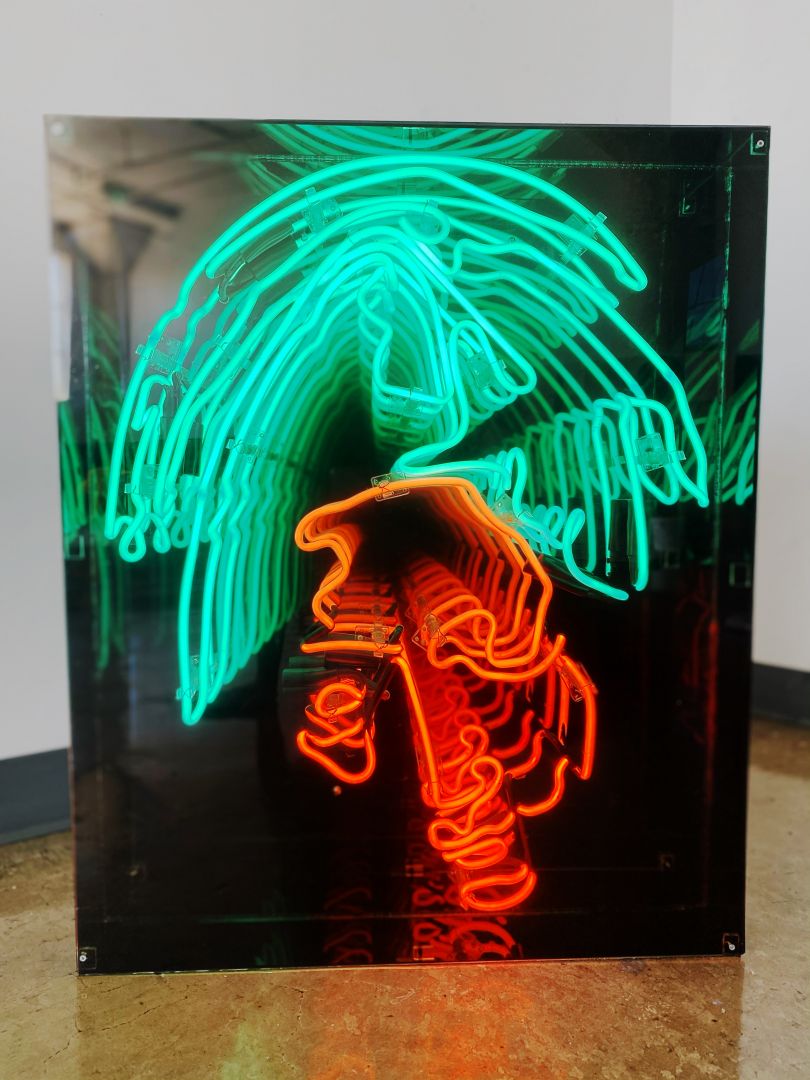 Let’s say your best friend was visiting the area and you wanted to show them the best time ever. Where would you take them? Give us a little itinerary – say it was a week long trip, where would you eat, drink, visit, hang out, etc.
I think the very first thing everyone should see here is the Santa Monica Pier. I do also live just under the Hollywood sign, so it’s always nice to grab a hike at Bronson Cave (where one of the old school Batman films was shot) as well as Runyon Canyon . Id get my friend a free gym pass for the week if they wanted to work out and I would take them to eat at Mild Sauce (I would do anything for their fried catfish on any day of the week) for dinner sometime. We would also definitely have to hit The Waffle for some good breakfast. We would definitely have to hit Caveman Cafe in West Addams for some banging Peruvian food -The cubano sandwhich there is EVERYTHING.
I’m a total nerd and art history buff, so we must visit the Getty and the Broad. 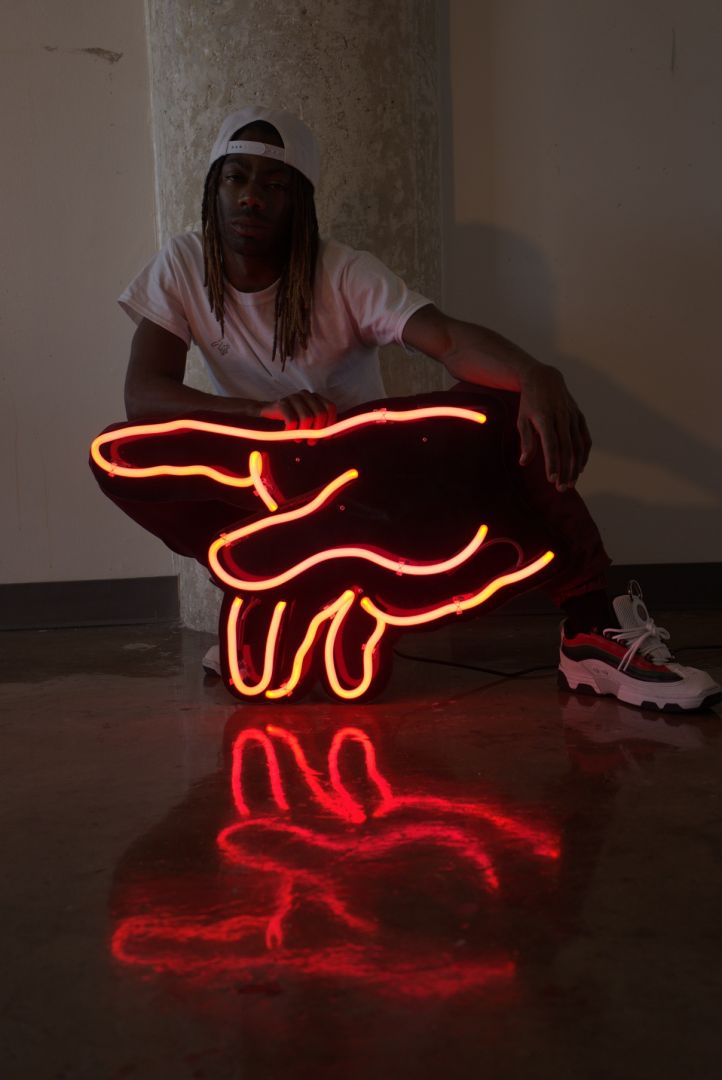 Shoutout is all about shouting out others who you feel deserve additional recognition and exposure. Who would you like to shoutout?
There are so many people who have been a part of my success.

I MUST take a moment to shoutout Saskia Kilcher. This woman. I lived in her first Hostel when I moved to Los Angeles. and this is where I have met some of the greatest friends – many of which I list below. I one day came home really upset about how I was being treated at a local coffee shop where I worked and she ACTUALLY told me to quit my job and she said I would have an entire month to find something more fitting of my talent. That is exactly what I did.

I want to give a shoutout to @Johnrichouxdesign (John Richoux) for always keeping me in the loop, providing me with an opportunity to create neon signgage for Tyga’s album release party in 2018. That really elevated my career and opened doors of visibility for me in the world of production art and set dressing. He also has sent so many lovers of neon my direction.

Next, I want to shout out Asher Levine @asherlevine who has single-handedly thrust me into the world of couture fashion, always pushing the boundaries of apparel – creating functional, wearable art. We have created so many amazing things together over the years and still we manage to make magic.

I want to shout out Olivier Hero Dressen (@herodirector), Charlotte Voyer (@Charlottechoovyr), Tom Leduc (@Tomjleduc), and Pierre Pascalier (@ppascalier) who all came together to help me produce a music video for a song I wrote and recorded called Eloise. It was at this point that I began to see a greater vision of and for myself and my career. Not only did I never, ever imagine I would be making music, but I never saw myself as someone to be in front of a camera, so this did a lot for my confidence. I really appreciate them helping me make that dream come to fruition.

Speaking of that Music Video -I want to thank Marc Rochotte (@lasersouptwinkle) for convincing me that I might had an untapped skill for music, producing tracks and pressuring me always to record. He’s also just an all around great friend.

There are so many others I would love to mentions, but I would simply say that my friends Zack, Quantel, Maya, Lucas, Luca, Andrea, Carlito, Jerz, Colton, Reilly, Leigh, and anyone else I might have missed for ALWAYS holding me down along this journey.