We had the good fortune of connecting with Hunter Nakazono and we’ve shared our conversation below.

Hi Hunter, what role has risk played in your life or career?
When it comes to music, The Tens believe that taking risks is a necessary endeavour to create art that is both unique and compelling. Getting out of the “comfort zone” has defined the ethos of this LA band since its formation in 2014. Early on, no venue would book us. We didn’t have much to offer them in the form of experience or a fan-base (5 instagram followers…probably someone’s parents). So, the band bought a gas-powered generator and we unloaded our amplifiers, guitars and drum set out onto the streets of Los Angeles in search of a corner on which to busk (a worldly tradition where musicians play outside for tips). The band was chased out of everywhere by the authorities except for a busy, nightlife corner in Hollywood where we performed from 9pm-2am, 4 nights per week for a year. It was an immense risk to bring our favorite material objects onto the sidewalk and perform for rowdy nocturnals without any sort of security. There, the band witnessed a gun-fight, numerous brawls, direct threats and theft (our first generator was stolen). The physical danger was so prevalent that the ever-present, petty hecklers and social rejection didn’t even phase us. The street corner provided us with the experience that we desired, a staunch artistic disposition and our first residency from the bar that heard us across the street. We were finally in the venue scene and instilled a “play-every-gig-possible” policy. At one point, the band was performing 12 shows per month in Southern California alone! The intention of the group was always to be a “big band” (our original nickname was The Roaring Tens) and a high frequency of shows was the only way to make that happen. It’s easy to convince two hooligans (especially when one’s your brother) to start a band but much more difficult to persuade a motley crew of 7 top-tier musicians to hop on board without compensation. Putting together rehearsals was a scheduling nightmare and became quite expensive, so we began treating each gig as a rehearsal for the next one. It’s a big risk performing with a bass player you just met with nothing but a few hand-written chord charts (but hey, we dug the pressure). When stretched thin, The Tens even performed 5-hour gigs with as little as two musicians. We found that “ice-skating uphill” offered more opportunities for unique and compelling music to be made. Extraordinary events occur when ordinary people are faced with out-of-ordinary circumstances and they rise up to the occasion! Three self-booked national tours, a dozen residencies and 400+ shows later brings us to today. Within the show, The Tens employ risk through the philosophy of not preparing a setlist. Typically, bands write a list for a show and rehearse it ad nauseam with the precise personnel. Though that will ensure a tight execution, sometimes it yields a flat, predictable performance. Instead, The Tens feel the vibe of the room and someone calls out the next song. This allows us to be even more present with the ever-changing environment. It also guarantees that no two shows are the same. The Tens also flirt with risk through improvisation. Free improvisation is probably the highest artistic risk a musician can take; creating art in real time, in front of an audience. It’s like walking a tightrope. The higher the building and the longer the rope means a greater reward for success and a more exhilarating experience. Miles Davis once said, “When you hit a wrong note, it’s the next note that makes it good or bad”. In a performance, a musical gaffe will make anyone squirm, but if a player knows how to “roll out of it”, all is forgotten. Taking risks during improvisational sections has taught The Tens how to maintain composure both in the musical world and the social. Like Miles, we all make mistakes in the real world, what matters is how we roll out of them. On the quest to create something honest, unique and compelling, taking artistic risks took The Tens to the street, pulled us off the street, allowed us to assemble a large, pro-grade dream band, forced us to be present, pushed us to our creative limits and taught us how to roll out of low points in life. Taking musical chances is what defines and drives this band. So, in the spirit of Miles Davis: “If you hit a wrong note, hit it again! 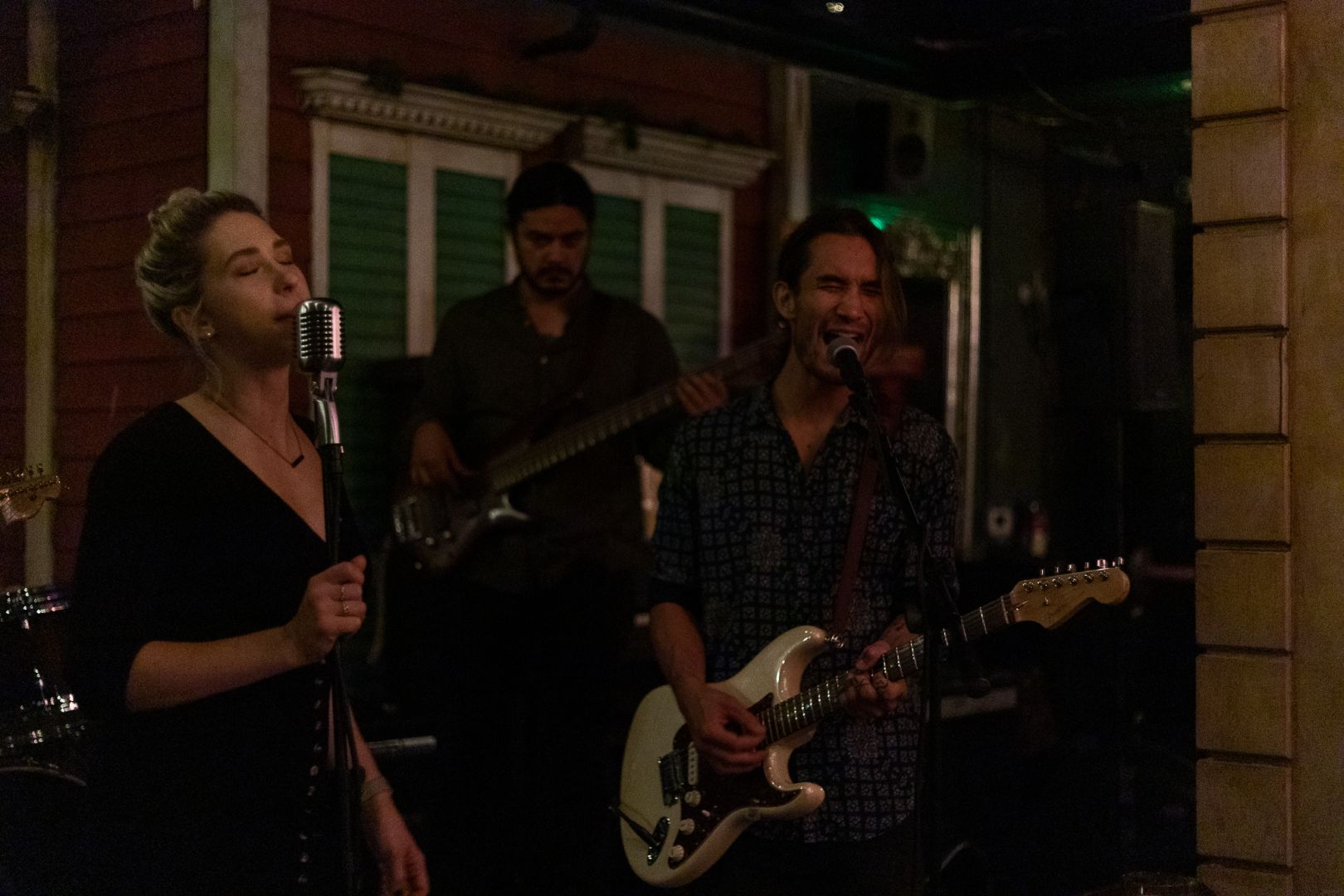 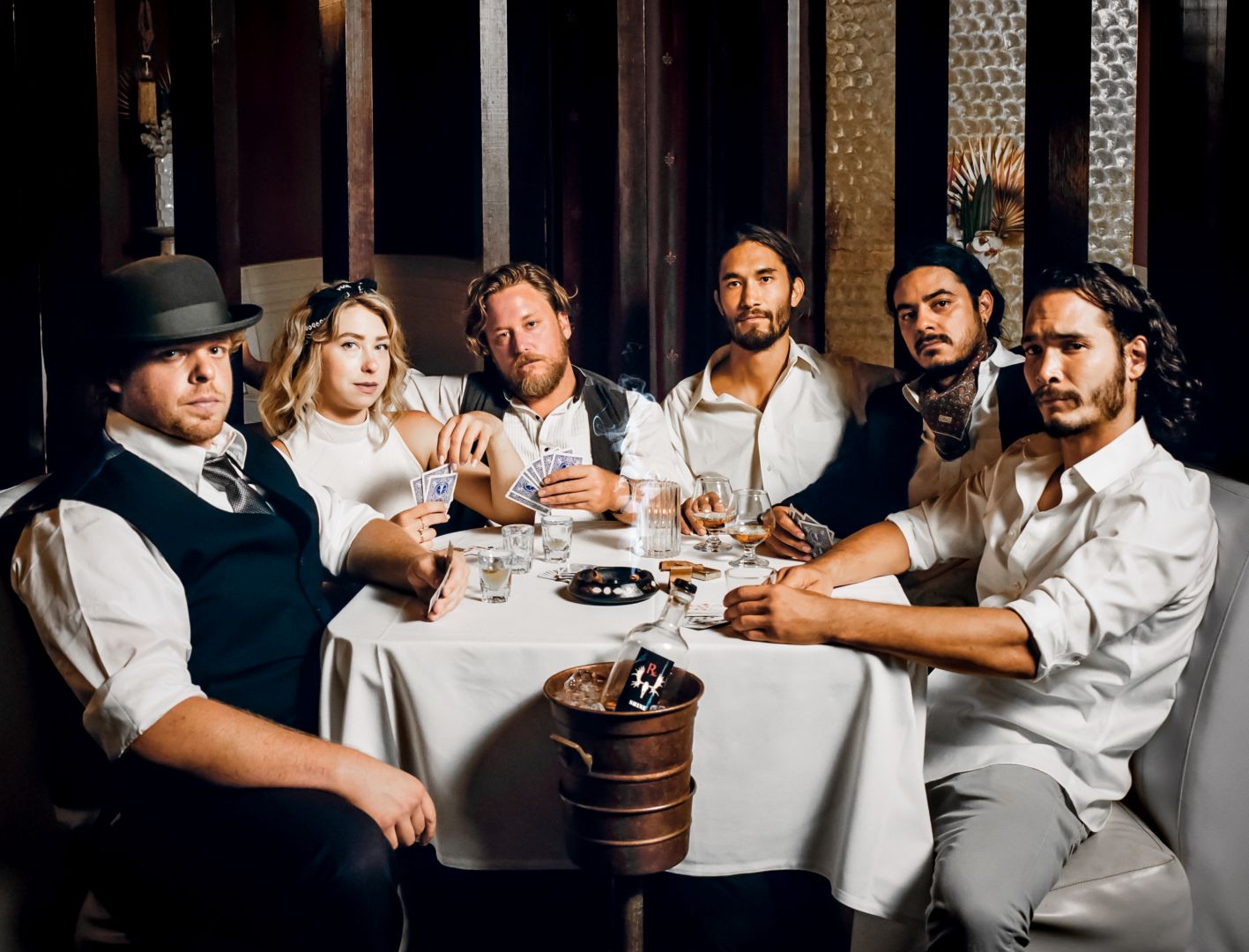 Let’s talk shop? Tell us more about your career, what can you share with our community?
The grind has been real for this band. We’ve been DIY as a collective, for 7 years now and it has taken us this long to finally finish recording our first studio album (Broken Romantic, Heavy Crush Records — fall, 2021) which is being mixed by engineering wizard J.J. Blair (Johnny Cash, The Who, Smokey Robinson). Part of that is a result of patience and turning down offers that don’t serve us and part of that is because the struggle is real. Fortunately, we truly enjoy each other’s company, so the grind of an amateur act turning professional is much more tolerable! The biggest lesson I’ve taken away from this rollercoaster ride is to be present during the downs. In my youth, I only thought about the future, my dreams and where I wanted to be. I missed so many moments because I was fixated on how far I was from my ultimate destination. The harsh reality is that there is no destination. It’s all a ride. Describing our sound is as difficult as describing what an orange tastes like to someone that’s never had one. Still, the band pulls from all genres of Americana roots music especially funk, soul, country, blues and jazz…so basically rock’n’roll. As for our brand, The Tens seek to create an authentic forum for a community by making and performing music that exemplifies our honest pursuit of truth in a chaotic and difficult world. In other words, we just want to groove with y’all.

Any places to eat or things to do that you can share with our readers? If they have a friend visiting town, what are some spots they could take them to?
I’d first take my friend to Angeles National forest for a nice, healthy morning hike. Then we’d head downtown to The Escondite for an ice cold brew and a juicy burger. They have a huge parking lot set up like an epic urban picnic. We’d finish the night off with a fine cocktail and live music at The Dresden (when the lockdown’s over, of course). The next day, I’d explore the trails in Topanga Canyon and the beauty of the west-side. Afterwards, have a glass at Rosenthal Wines in Malibu. It has a great outdoor space and a large stage. The Reel Inn is next door and they have some of my favorite seafood available as well. Later in the week, I’d take them down to Long Beach to my favorite haunt, The Pike. Epic food and a great local vibe there! And finally, I’d give my friend a taste of East LA out in Pomona at the massive Old Stump Brewery. It’s always a groovy time there. 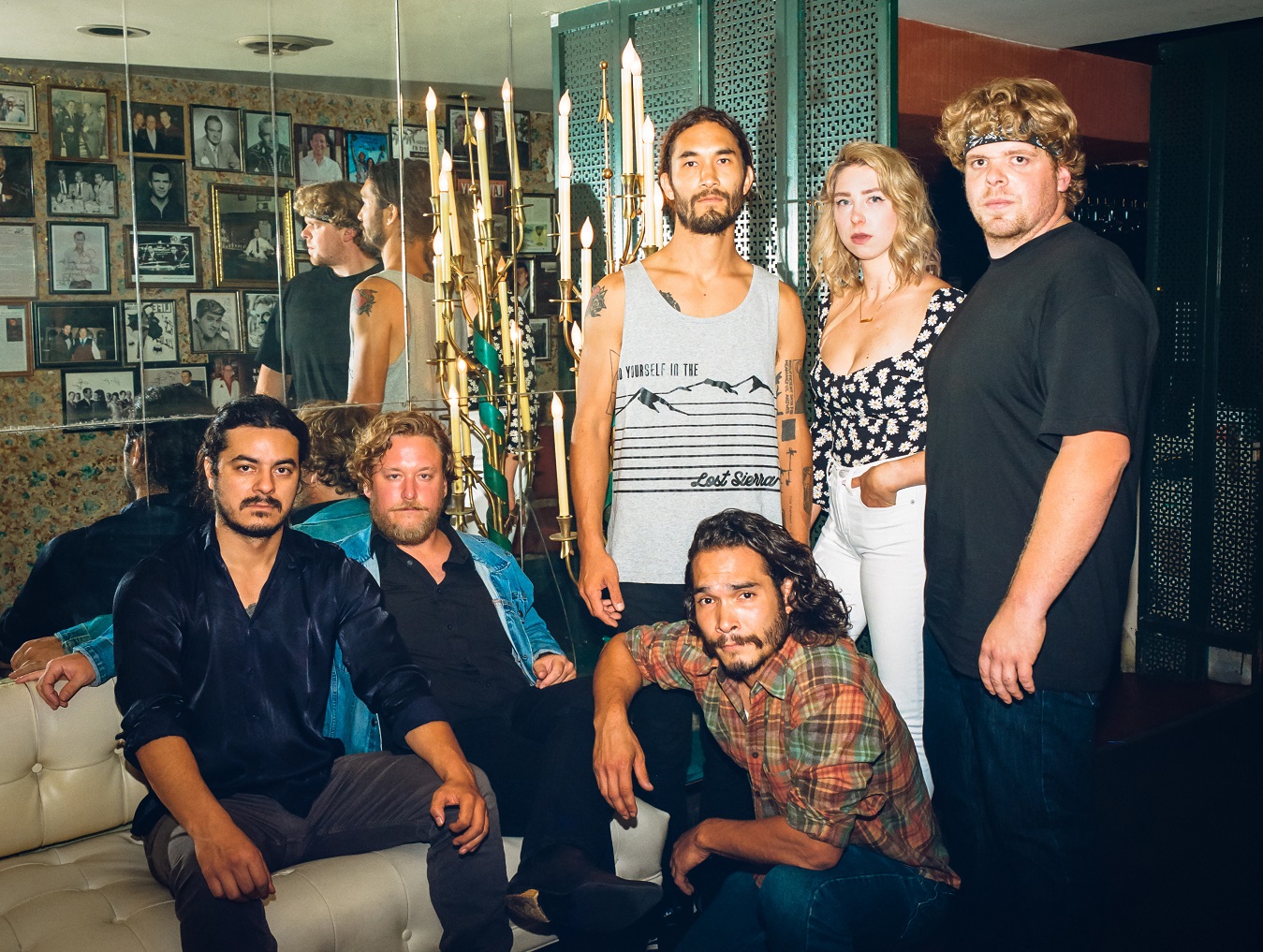 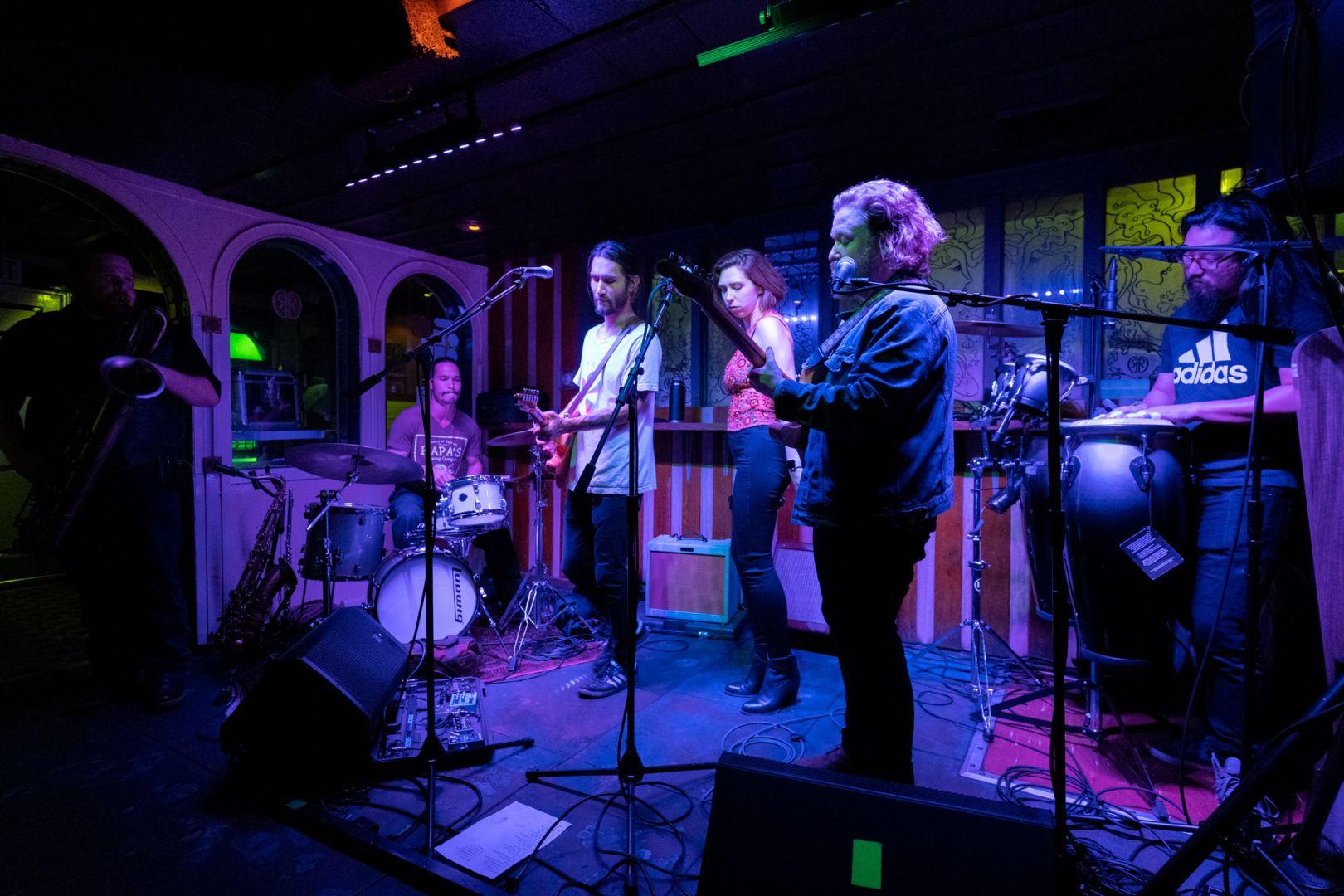 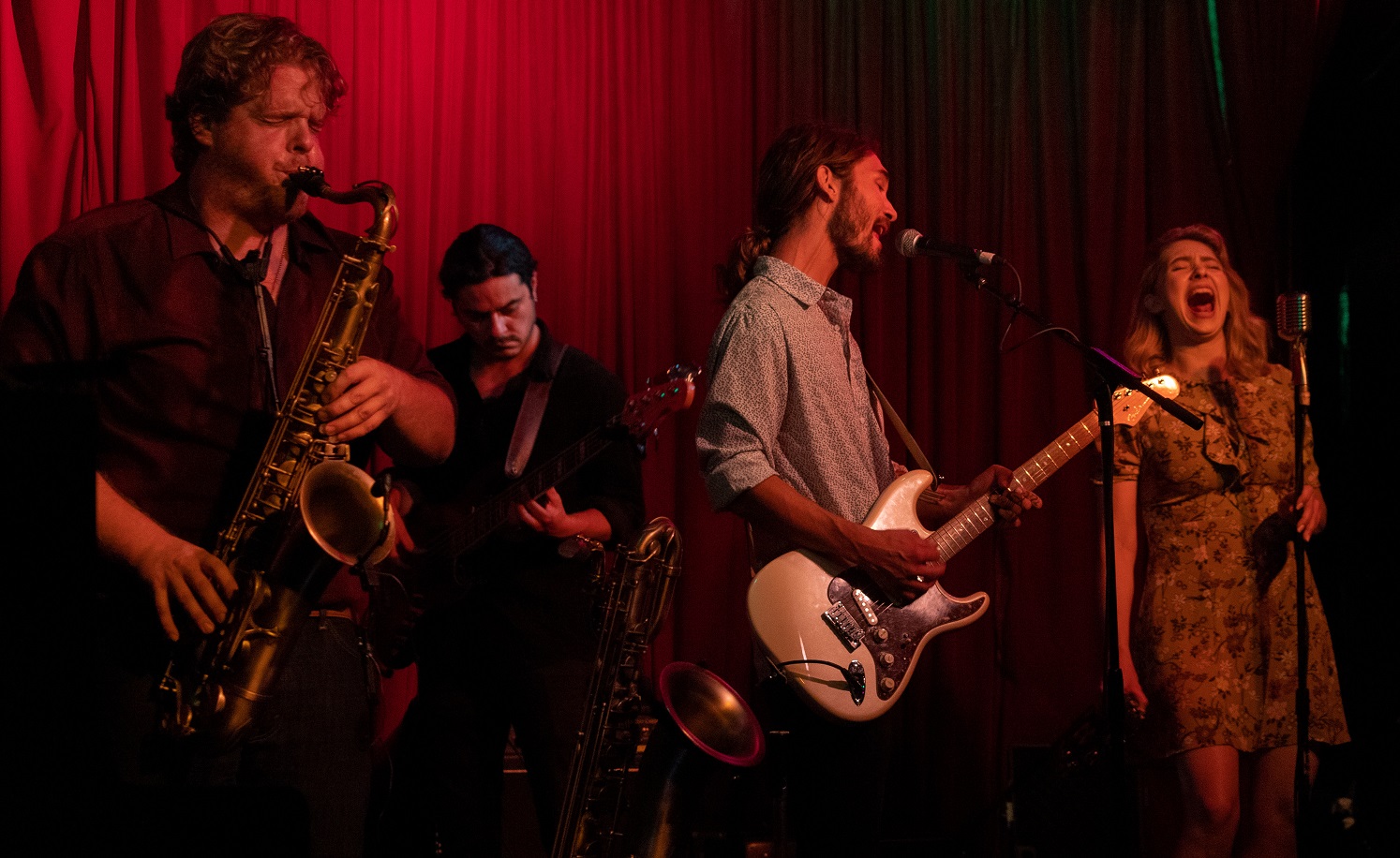 The Shoutout series is all about recognizing that our success and where we are in life is at least somewhat thanks to the efforts, support, mentorship, love and encouragement of others. So is there someone that you want to dedicate your shoutout to?
Our Shoutout goes to Mike Neufeld and his restaurant Gracie’s Pizza. Mike has been a good friend of the band for years, helps us store our gear and provides a home-base in this wild city. Gracie’s for real has the best pizza in town. The crust, the sauce, the toppings……everything about it. Also want to holler out to Mark Ferraro at the Dresden and fellow underground grinders The Late Great Charlie Borski. Can’t wait to see y’all again!