We had the good fortune of connecting with Joe Davidson and we’ve shared our conversation below.

Hi Joe, how do you think about risk?
I’m not sure if I would explain it in terms of risk, as much as explaining it in terms of pursuits. I have been making sculpture for over 25 years now, but for me the term ‘sculpture’ only refers to things are three dimensional. My body of work consists of multiple avenues, crossroads, and dead ends. It’s more like a web of ideas than straight line from one idea to the next. Maybe it’s an impatience, mercurial personality, or a deep seated terror at being defined by one thing, but I’ve never been able to stay focused on one body of work for years at a time. That’s definitely risky when the market side of art making desires consistency. However, I think there are consistent threads in my process and interests, even if the final products at first glance can seem wildly diverse. Instead of defining a certain choice of action as taking a risk, I may define it as taking an opportunity to learn and grow. 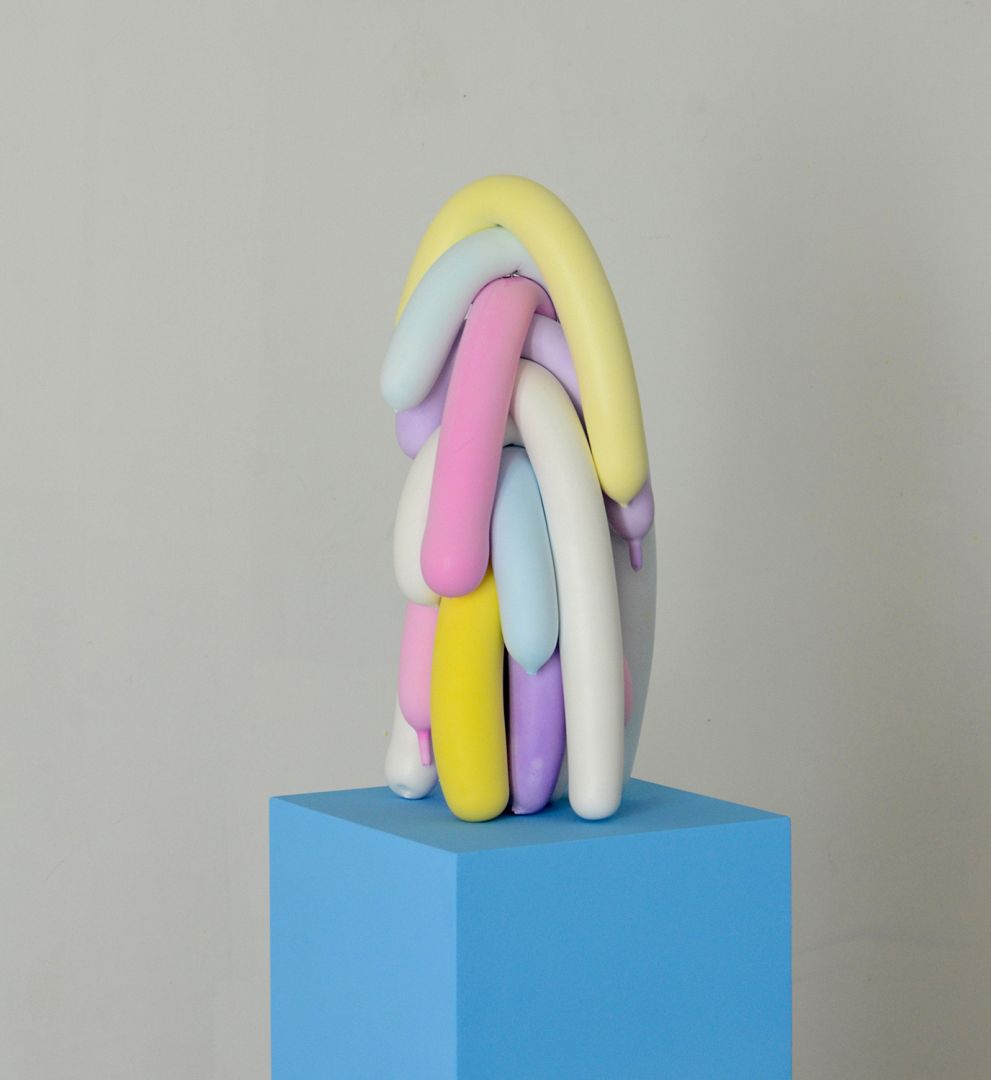 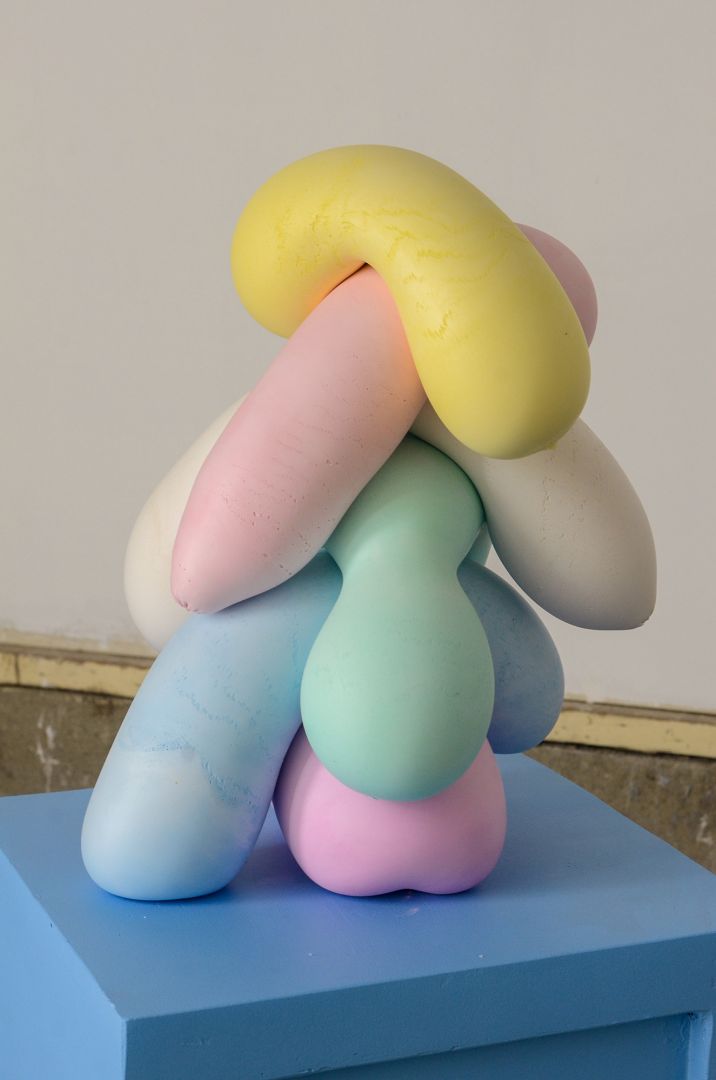 Let’s talk shop? Tell us more about your career, what can you share with our community?
In many ways, I’m a traditional sculptor. I work in plaster, wood, resins, concrete. However, I also work in scotch tape, expanding foams, silicone, and other materials usually associated with the fabrication of sculpture. Much of what I have been doing lately is casting plaster which is tinted in these strange pastel tones. I’m using balloons for the molds, so the shapes are heavy and floppy, but also light and airy. My work recognizes the force of gravity, sometimes tacitly and sometimes overtly. It is a practice of mixing the delicate with the ordinary. I have been mining the contrasts of sculpture, relishing the materiality while also attempting to address the ephemeral. Because sculpture is so heavily rooted in the ground, one has to accept its materiality. Yet, some of the most effective work I have witnessed is that which attempts transcendence. It is that steady push and pull between mass and lightness, solidity and absence, form and void. Additionally, I am drawn towards familiar objects and associations that are embedded within them. Current work makes reference to visual anchors such as bodily forms, sagging, or bloating. Making work on a day to day basis is sometimes laughably easy and sometimes it’s excruciatingly difficult. I’m reminded of stories about songwriting, where musicians talk about some songs that take 15 minutes to write, while others may take years. It’s an endeavor that is constantly on your mind, whether you’re on the studio or not. It’s like being a parent. You have to work pretty tirelessly to professionally succeed as an artist. You first and foremost have to be your own cheerleader, and convince others that what you do is worth considering and supporting. Also, you have to understand that in the beginning you will have three full time jobs: your survival job, your art making job, and your art marketing job. All three demand a lot. You have to look for opportunities everywhere, while also making the opportunities yourself. It’s a pretty tall order. One thing I’ve learned is once you make it to a certain point after all the work you’ve done, you still have to keep working. I used to fantasize about being able to stop doing all the mundane tasks once got to a certain point, and then when I got there I realized I still had some of the same tasks, plus a few more.

If you had a friend visiting you, what are some of the local spots you’d want to take them around to?
I would really want to show them the beauty and dirt of Los Angeles. I would assume my friends would be looking for art/eating/hiking experiences. For art, I would take them to all the highlights, plus the smaller idiosyncratic venues that feel distinctly LA. We would of course go to both Getty’s, both for the art and the views. I would drive them up Wilshire to see the hole in the ground which was LACMA (and when we get home, I would show them images and drawings of Pereira’s original museum so they see what was destroyed), as well as what was formerly the Marciano Art Foundation (yup, that was a private museum). Then, we’d go to the Broad (yup, that’s a private museum) and MOCA. I’d want to show them the rich landscape of galleries and spaces, from DIY spaces in the Bendix Building and Chinatown, to spaces on Santa Fe (industrial space heaven with the smell of tires and diesel), to blue chips like Blum and Poe and Gagosian. I’d also want to show them places that most people wouldn’t have any idea existed like Wende Museum of the Cold War, the Underground Museum, and Museum of Jurassic Technology. We would be on a taco tour of Los Angeles. We’d definitely hit Koji (either find a truck or go to the taqueria), Cactus tacos in Hollywood, Leo’s at LaBrea/Venice. I was heartbroken when Taco Window in Jefferson Park closed. They would try Crossroads on Melrose to have excellent vegan, and Kali on Melrose or Osteria Mamma (both in my neighborhood). We could also grab a drink at Mandrake Bar on La Cienega (after gallery tours). It’s great to see LA at night from Griffith Observatory and grab a drink at the Roosevelt. During the day, I’d like to drive them up to Topanga from the PCH, so they could smell the canyon air, see the dramatic arid landscape and realize that, yes, this is LA also. We’d eat at Inn of the Seventh Ray for the classic SoCal new-age crunchy vibe. 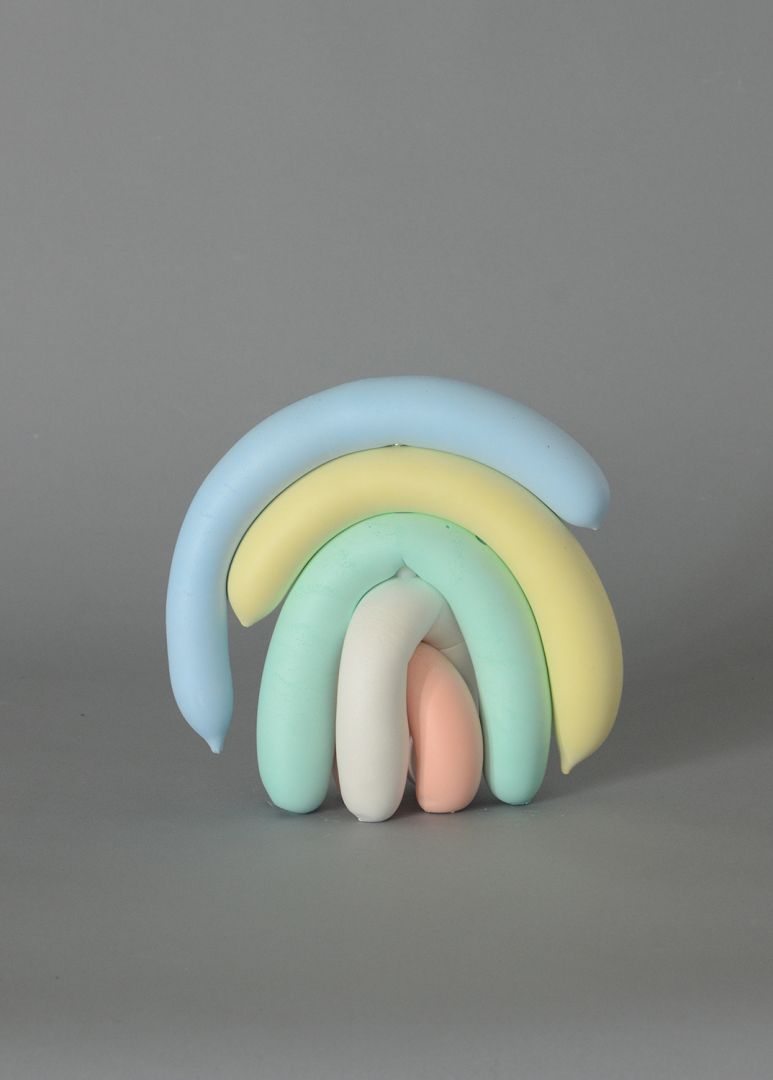 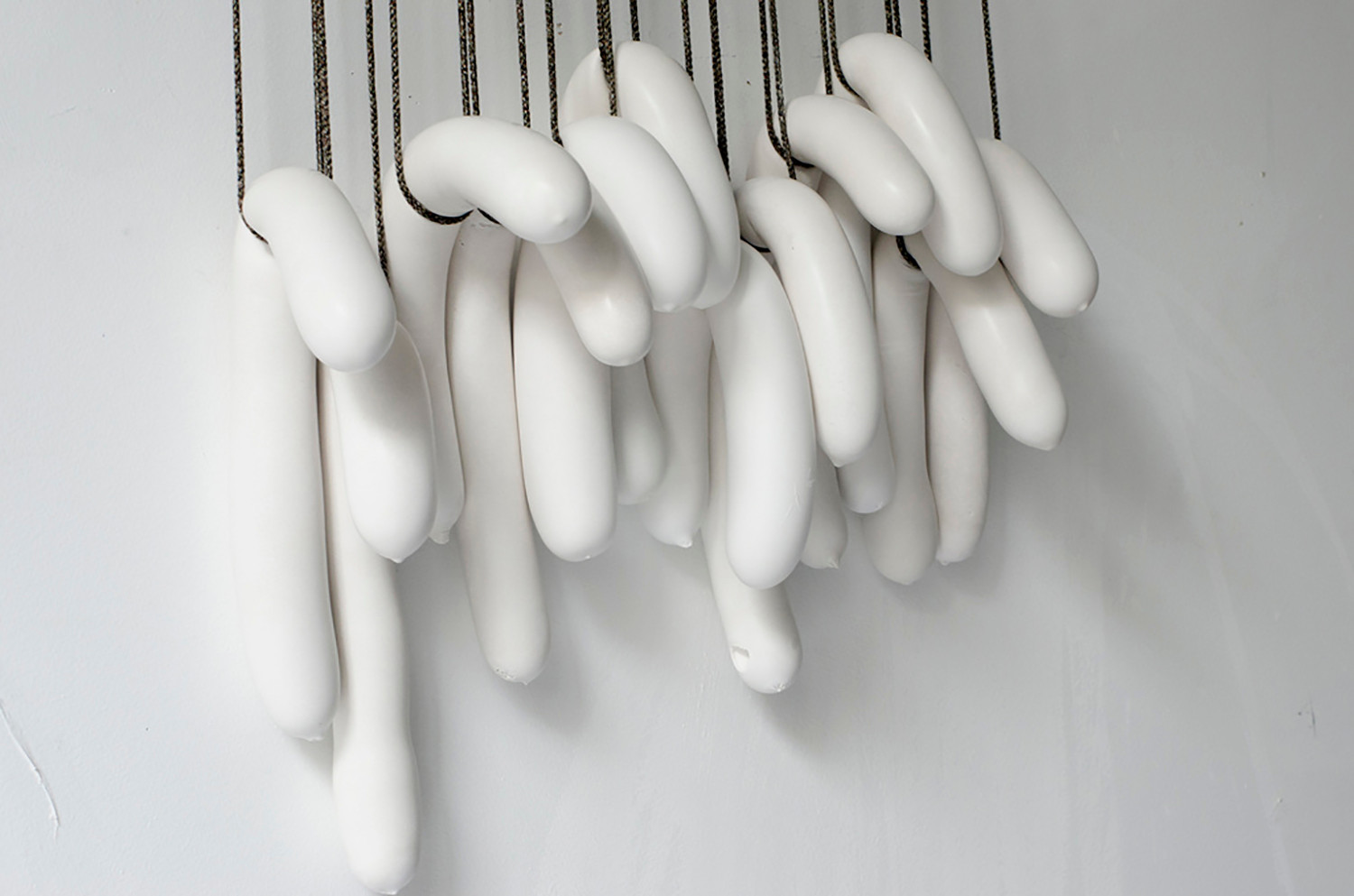 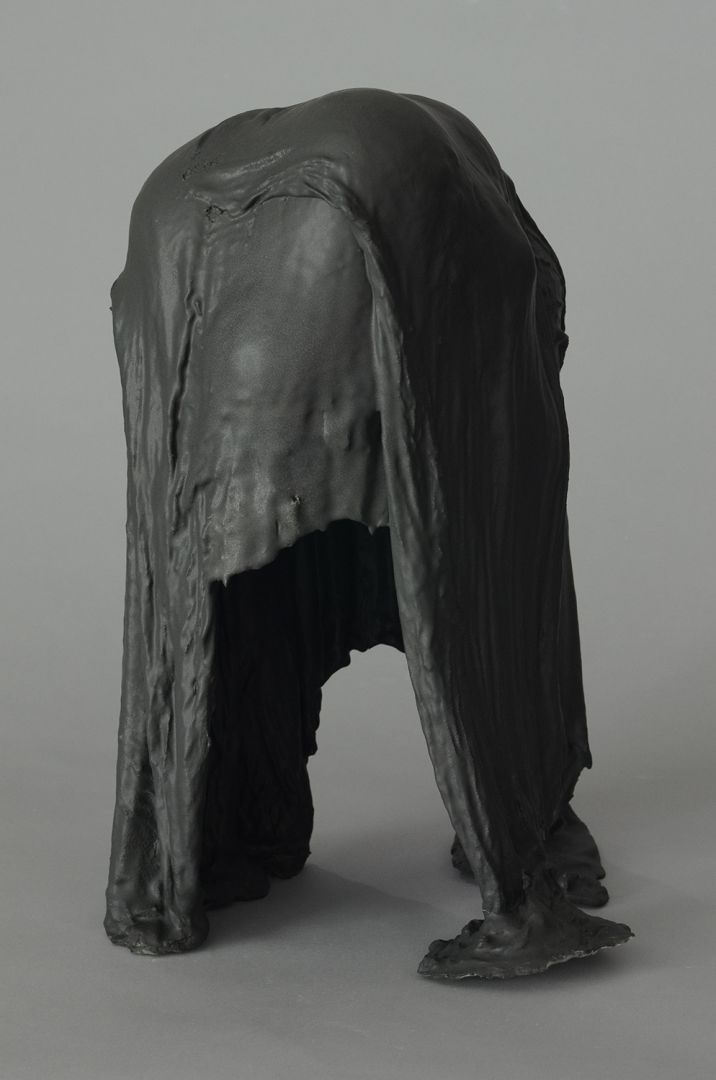 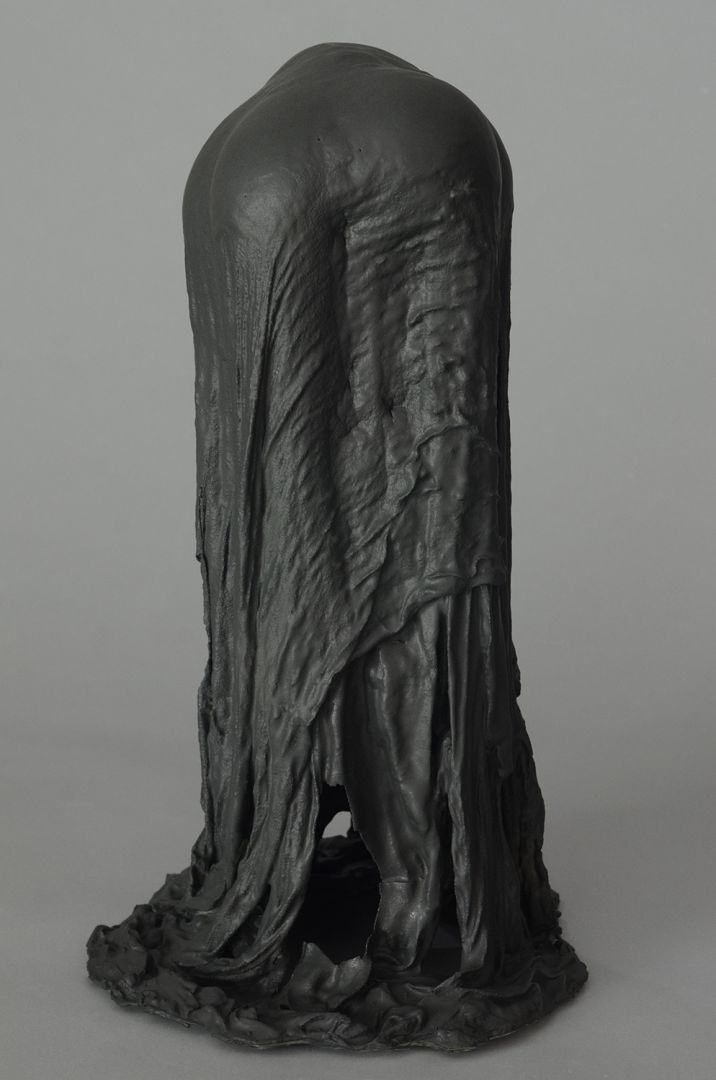 Who else deserves some credit and recognition?
I know it sounds a bit tired, but I always need to give a shoutout to my family. My wife and kids are pretty unwavering in their support. They are willing to stand for hours at art openings where they don’t know anybody; they are excited when things go well (both in career and the daily grind of the studio): they are there when things go poorly. They never question what I am doing, as they know what I do is pretty fundamental to who I am. Also, in Los Angeles I have been showing with jill moniz at Quotidian and with Durden and Ray. They are both fantastic in similar ways. jill runs her space as if it’s a traditional gallery, but she’s much more interested in the creation of a vibrant and egalitarian community, and commands huge respect from me. Durden and Ray is an arts collective in downtown LA, and we work to create an art community through local and international programming. It’s an interesting dynamic of artists putting themselves out there and making it happen for themselves and their peers.