We had the good fortune of connecting with Marza Panther and we’ve shared our conversation below.

Hi Marza, do you have a favorite quote or affirmation?
I love quotes, and I have two actually that I often post on my various social profiles. The first is: “In time of care and sorrow, (music) will keep a fountain of joy alive in you.” This was said by Dietrich Bonhoeffer, a German theologian who participated in a resistance movement against the Nazis and was ultimately executed for plotting to overthrow Hitler. Music has definitely “kept a fountain of joy alive” within me through times of “care and sorrow”, and I relate with that so much. I grew up in an abusive religious group that was a lot like Heaven’s Gate. Most forms of personal expression were outlawed, but since I had to play the cello for school, somehow my transgression was overlooked. So I’d spend a lot of days at the cult compound secretly practicing the cello at 7, 8, 9 years old, and feeling like it was my salvation, just the way the vibrations rippled through my body. I really understood that sound itself could be a healing mechanism, a way to stay sane. And I still feel that way today. The other quote I love is by a British composer named Malcolm Arnold: “Music is the social act of communication among people, a gesture of friendship, the strongest there is.” I really love the idea of music as a gesture of friendship. For me, it is precisely that. I am the type of person who would theoretically love to be friends with every person in the world, but that’s not really possible for a variety of reasons such as shyness, isolation, age differences and the like. So offering music as a medium of friendship seems like a good compensation. It’s a way to connect with all kinds of people abstractly. It’s a universal language, and even if you don’t see eye to eye with someone, music can sometimes bring you into harmony with each other nonetheless. It’s the great equalizer. 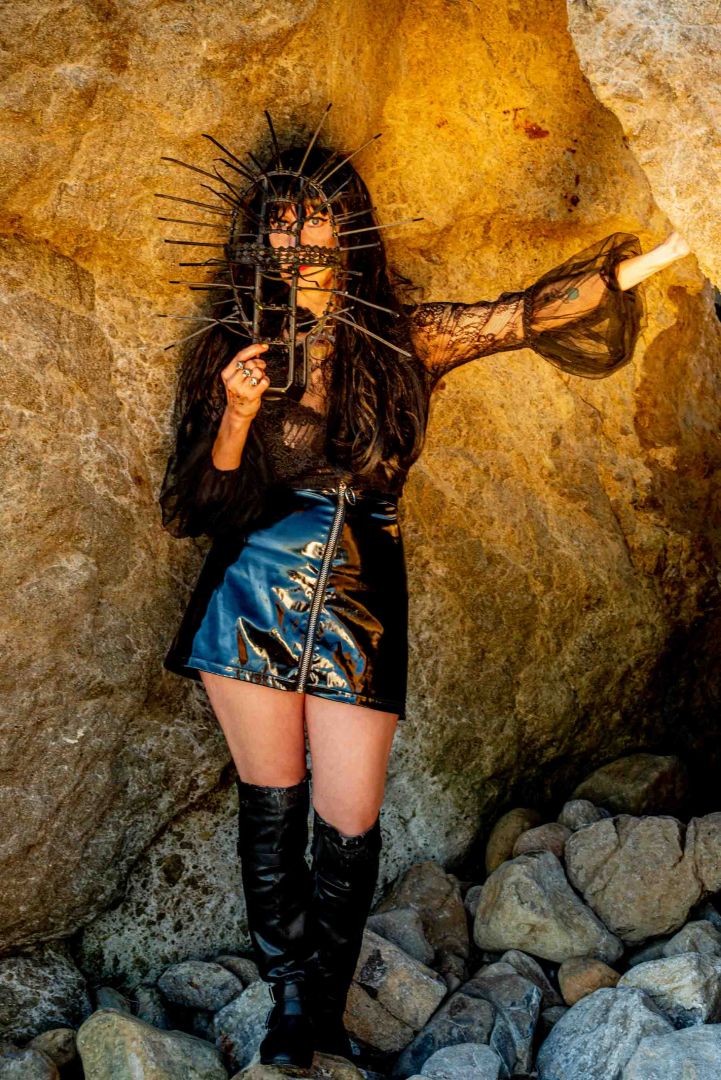 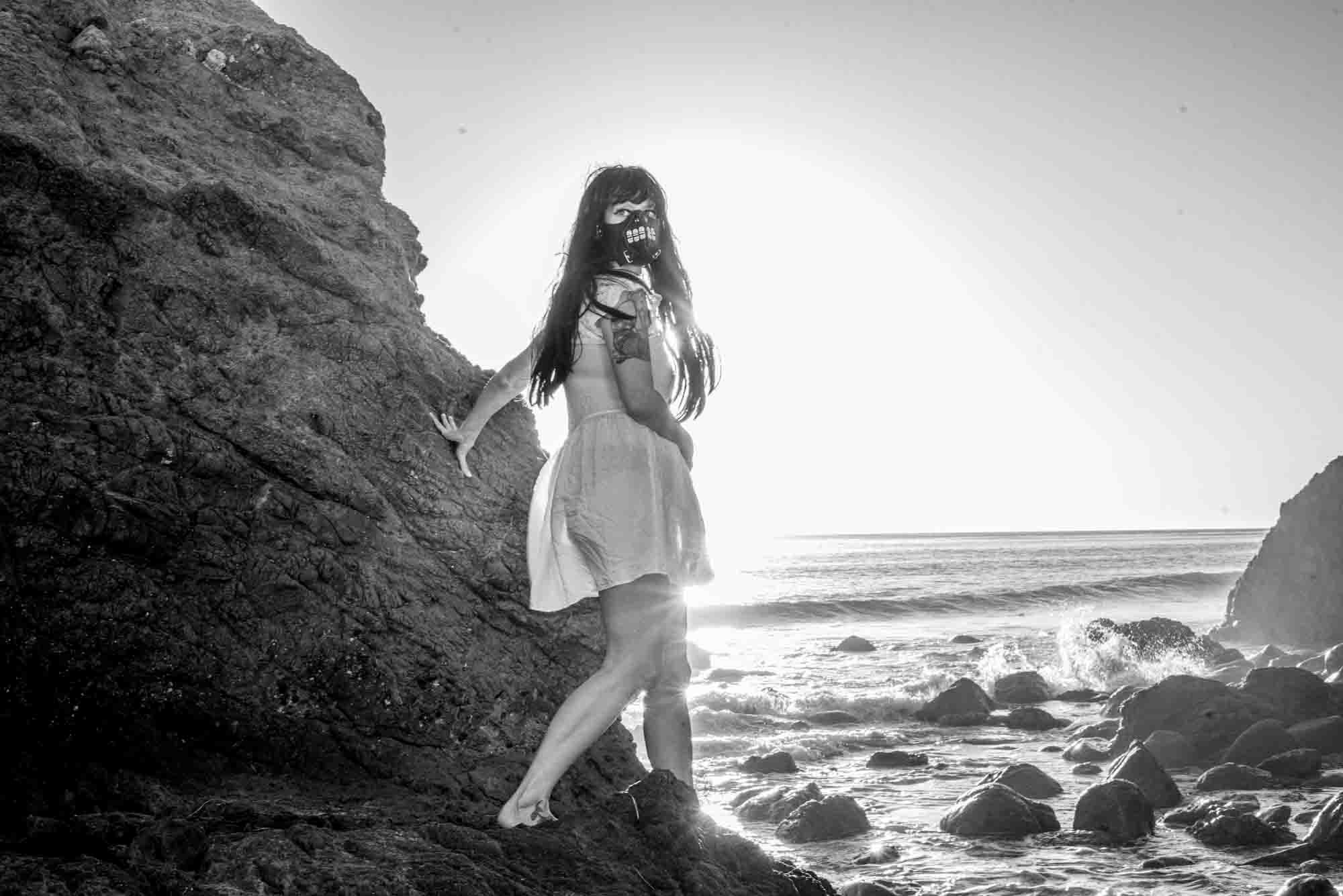 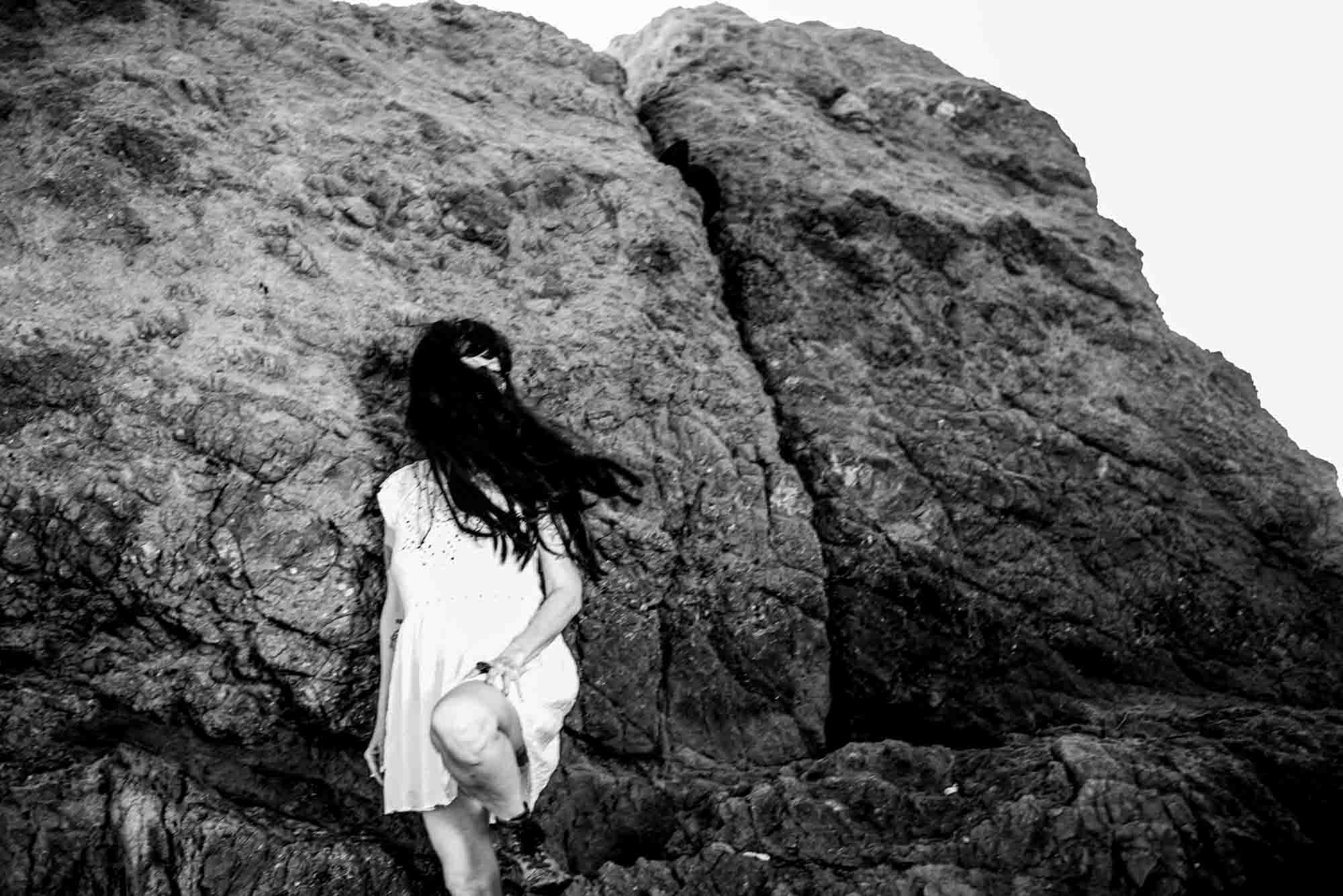 Alright, so let’s move onto what keeps you busy professionally?
Thank you for asking. I am a musician, and I put one album out last year (Mathanas) that was kind of a mix of styles. This year I am making 2 EP’s, one heavier and darker, and one with just my acoustic, cello-oriented songs. I’m really excited to release all this new music. For many years, I was focused on my main instrument cello, so I wasn’t really in the mode of making my own music as an artist. I was feeling a little bit like hiding behind a big instrument so I wouldn’t have to sing. But underneath, I really wanted to express my feelings through my voice with words. So eventually I overcame my fear. My grandfather was a well known Jewish songwriter in the 1940’s, he wrote, “I don’t want to set the world on fire.” It’s a beautiful song, and my only connection to him since he died before I was born. The main lesson I’ve learned on my music journey is to just stop hoarding songs and be more generous, let the music get out there and help someone or delight someone. If I was on that show Hoarders, it would be me sitting with 100’s of songs in my computer just not releasing them, tweaking them over and over, and generally just refusing to participate in the full cycle of music making: writing, recording, releasing, performing. Somehow I got stuck in the writing and recording phases, and just lived there for an eternity. But the past few years I’ve finally started the final two stages, the releasing and performing phases, which are of course, the whole point of music making. I think for me, it’s like, making music was a therapy, a source of healing for so long, and I didn’t want to share it with other people, i just needed it all for myself. But over time, that has changed, and now I feel like I can send my healing energy to other people in this world, i have enough.

Let’s say your best friend was visiting the area and you wanted to show them the best time ever. Where would you take them? Give us a little itinerary – say it was a week long trip, where would you eat, drink, visit, hang out, etc.
Well, I wasn’t born in LA, but I’ve been here for a minute.. Some of my favorite spots during pandemic times: -Norwood Market on Hollywood Blvd.: Hey, this place is just my corner store where I buy coconut juice. It’s pretty adorable that they stock all these salt licks for hipsters like coco juice, and the other day I saw cauliflower rice in a package on the shelf. That cracked me up. The guys that own it play Bollywood movies and they sing along. They make sure they have everything a person could ever need for any reason. I bought some plaid eye-covers the other day for bedtime. -El Pescador State Beach in Malibu…this beach is always pretty empty and pristine (until I wrote this probably) and I love it. I did my photo shoot there on the rocks. It’s a very literary beach that makes you think of Wuthering Heights or something romantic. -Echo park swan boats: Believe it or not, I went there on my own a few years ago with my guitar and rented a boat. I peddled out to the middle and sat there writing my song Autumn in the Spring, which came out pretty good! But it was funny cause you really can’t steer the boat as a single person, you gotta switch sides constantly and you end up going into the weeds where the ducks give you dirty looks. -Dungeon by the Sea recording studio (dungeonbythesea.com): I found this place through a friend and ended up tracking the guitars for my new song Falln Angel there. It was such a great experience for a few reasons I will elaborate on. Gaza (Omar) and Kiefer helped me out, and they’re just the kind of people that literally live for music with a kind of purity that really touches me. They have a label they started, and they’re just really going for it which is infectious energy. I love people that put all their chips in the music basket and don’t look back. I’m in that place now, but it took me a long time to get there because I was afraid to fail and afraid to succeed. So I see them just going after their dreams and it’s really inspiring. -Hollywood reservoir: This is a circular walk that isn’t too tiring, and at the end, if you’re lucky, you see deer. Seeing deer is very magical, their big eyes, and the way they look at you like you come from a cruel, harsh and inelegant human place, while they dwell in flickering lights, warm leaves, mystical sky, fairytales and paintings….These deer are not shy, it should be noted, they’re just very dainty and they eat delicate little leaves like magic elves. I’ve seen them three times so far. I’m so glad they’re alive. -Locali on Franklin: I order the Dirty Shamrock smoothie with no coconut yogurt and add sunflower butter. This is MY drink. It’s like liquid sex for food-intolerant people. -Electric Lotus on Vermont (Indian food): I ate here years ago and it was bomb, then I think it was gone? But now it’s back? Who knows. But while writing this I’ve realized I’m hungry. They have fried broccoli made with gluten-free flour. It made us fart, but really good. -My house: Well, I live here and work here and I’m just here everyday all the time. We have a rice-maker. We take bubble baths every day. My fish Ice Cream died early in the pandemic and we buried her in a mound of dirt on the corner. This old Armenian man has an orange and white creamsicle pitt bull who is his best friend and she has a kind, wise face. There is a sultry Persian cat who lives across the way and he sits in the window glaring at me with gold pharaoh eyes. I make music in the walk in closet, and my boyfriend sings his epic land songs in his corner with the Japanese Taxi Driver poster. We’ve watched every season of The Wire, Flash, Mad Men, Watchmen, The Deuce, Transparent, Lovecraft Country, Fargo…plenty more. I feel lucky to be alive, to still be standing when so many have been lost to covid. And I feel grateful the earth is getting a rest from our incessant suction on its teet-bounty. All this will pass one day. In the meantime, more rice, more Flash, and more music made in captivity. 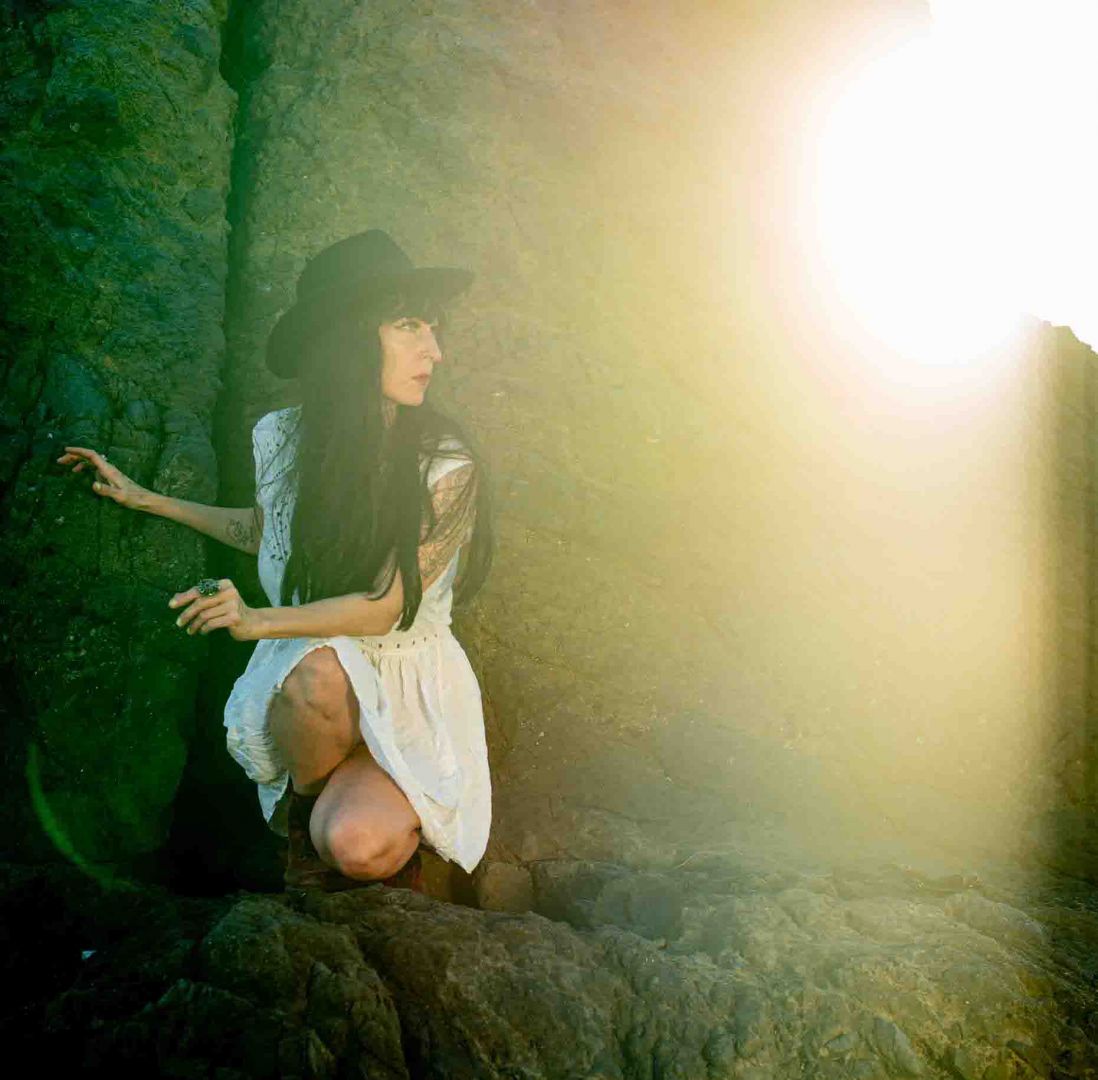 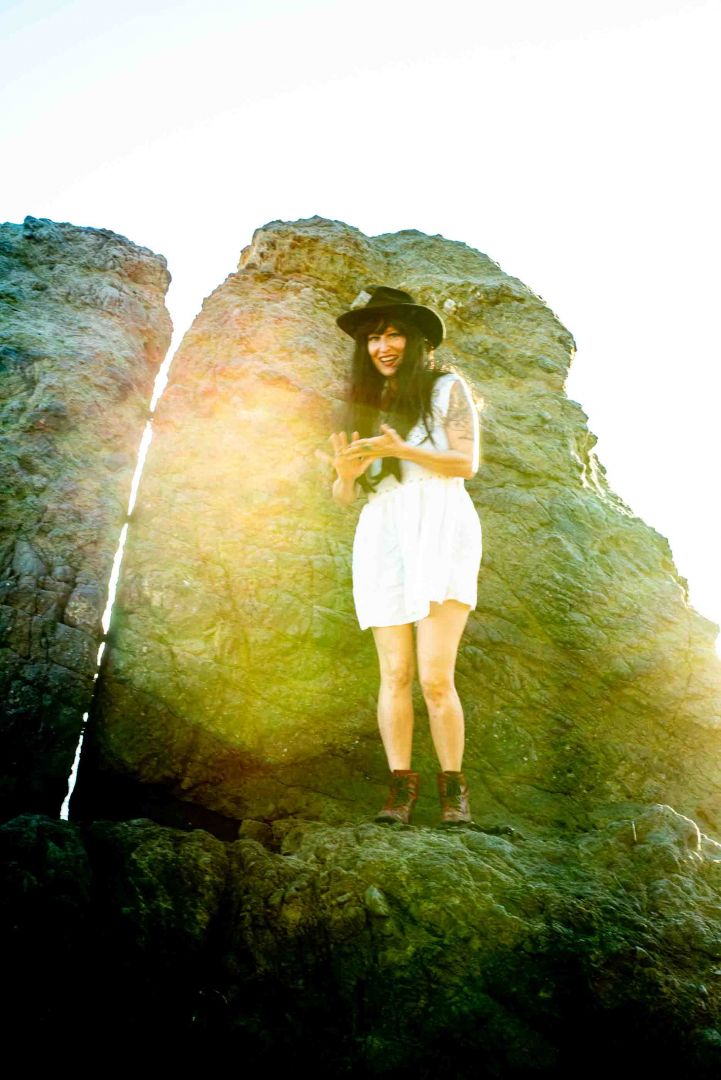 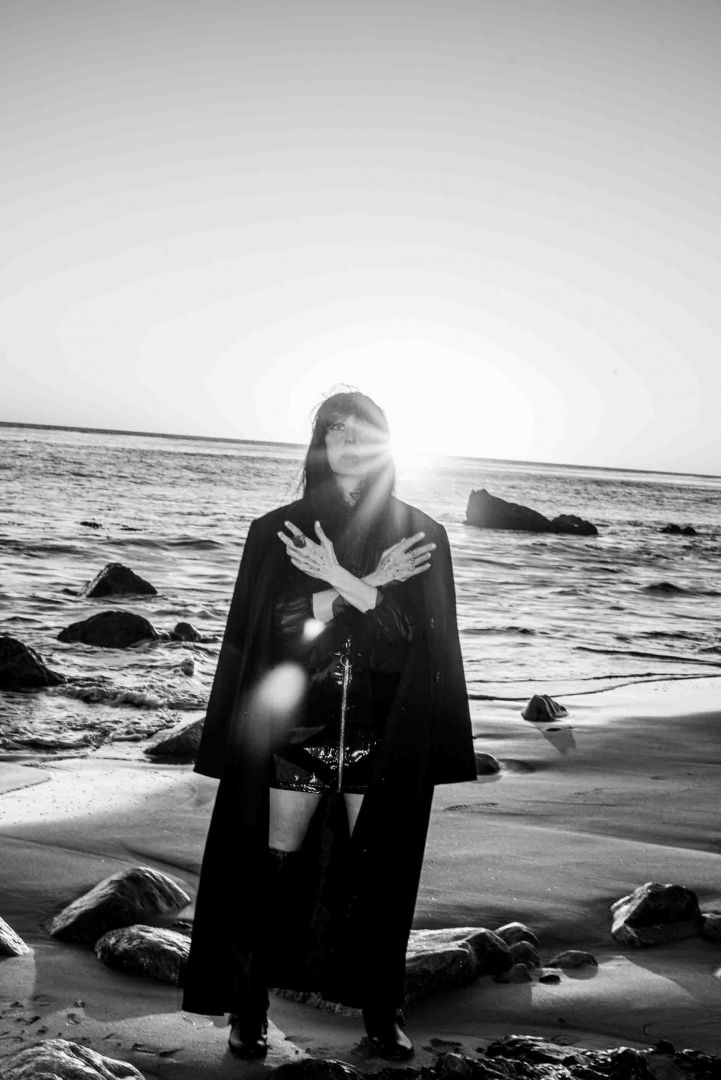 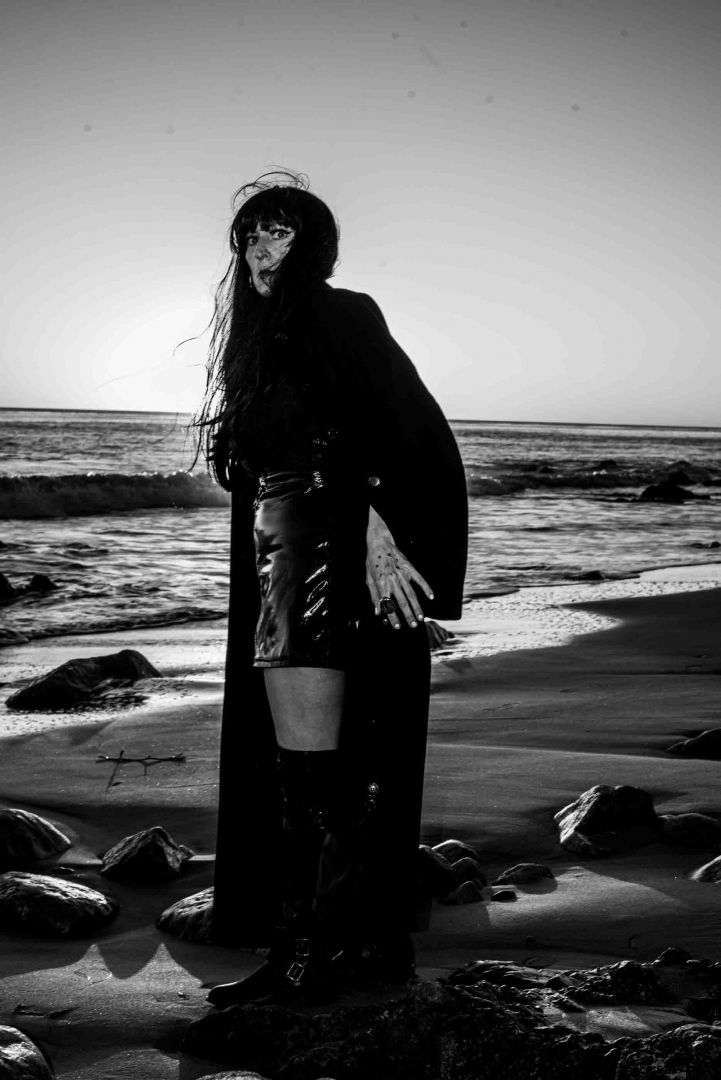 Who else deserves some credit and recognition?
This past year has been an intense experience. We had the pandemic, then we had an earthquake in LA, and we had some massive riots protesting the black lives taken from us, George Floyd, Breonna Taylor, Ahmaud Arbery and others. I don’t think I’m alone in saying that the Black Lives Matters movement created a deep and profound impact on my life this past year. Collectively we have come to realize how far we still have to go in terms of healing from the trauma that white supremacy has caused in our society, the deficit of humanity it’s created. More non-racist people became actively anti-racist in 2020 than ever before, an important step forward. The BLM movement I feel has been unifying, and has helped me have hope again and shake off some of the despair and apathy I’ve felt in the face of all the injustices in this country. On a personal level, I am really inspired by all my musician friends who keep growing, evolving and creating around me. They’re probably reading this and smiling right now. I’ve made it a point to have lots of other musicians in my life, and when I see them succeeding I feel a healthy jealousy that propels me forwards. I think jealousy can be really constructive in that way. I’ve been nurtured by other musicians who understand uniquely all the obstacles and emotional blocks that come with making music. So the very people who intimidate me or who I feel are out of my reach often become mentors and guides. It’s surprising how much good comes back to you when you ask people for their help. Lastly, I can’t fail to mention all the kind souls who contributed to my gofundme campaign to raise money to release my new song Falln Angel. I insisted that donations be around $5, so over 200 people donated to make this song happen. So much love. People from Instagram I’ve never met, old friends from music school, people at my jobs, and a few complete strangers in distant lands. It was incredibly uplifting to receive all that support and feel like my music was soaking up all the good energy of the people. My song is almost done, and I’m really beyond excited to send the song to all the backers as a gesture of gratitude and as a gift. I’m literally waiting for the day.