We had the good fortune of connecting with Susan Tanner and we’ve shared our conversation below.

Hi Susan, we’d love to hear about how you approach risk and risk-taking

Taking risks has been the driving force behind my career. Starting out as an actor, the risk to put myself forward and take a chance that I would be rejected–not cast, not hired—was ever-present. When I started to explore directing and producing, I took huge creative and financial risks, launching many projects and ultimately founding TheatreWorkers Project funding by the first grant proposal I had ever written.

When I decided to act on my dream of creating theatre with industrial workers, I took a risk by submitting an Artist in Communities grant proposal to the California Arts Council that would set my work with unemployed steelworkers in motion and would change the direction of my professional life. I had no idea how the project would turn out. I had no idea if the men with whom I would eventually work would buy into the concept but they did. It was a glorious time in my life, full of exciting work and creative risk-taking. As the years passed and I added many other unheard communities to TheatreWorkers Project’s programs, I continued to take creative and financial risks because the end products were always the “unknown”.

Creating theatre for the last 6 years with formerly incarcerated and then incarcerated participants has been the most meaningful, rewarding, and challenging risk-based work of my career. I love the feeling of diving into a project not knowing what will evolve. I’m in awe of how collaborating with my fellow artists and the participants always produces amazing creative projects. I would never consider playing it safe by relying on previously written plays for the participants to rehearse and perform. Taking that creative risk and inviting those with whom I collaborate to do the same is where I live! 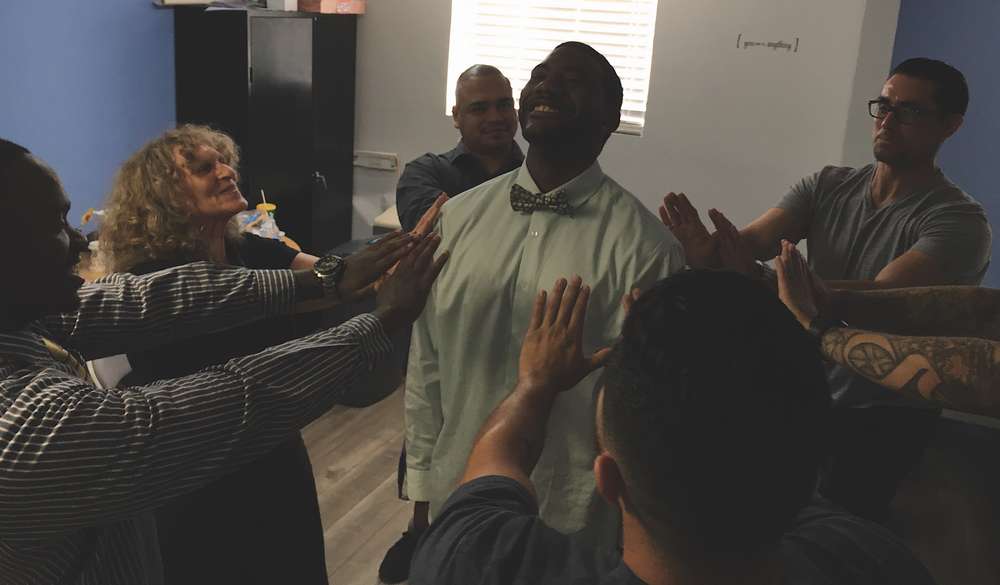 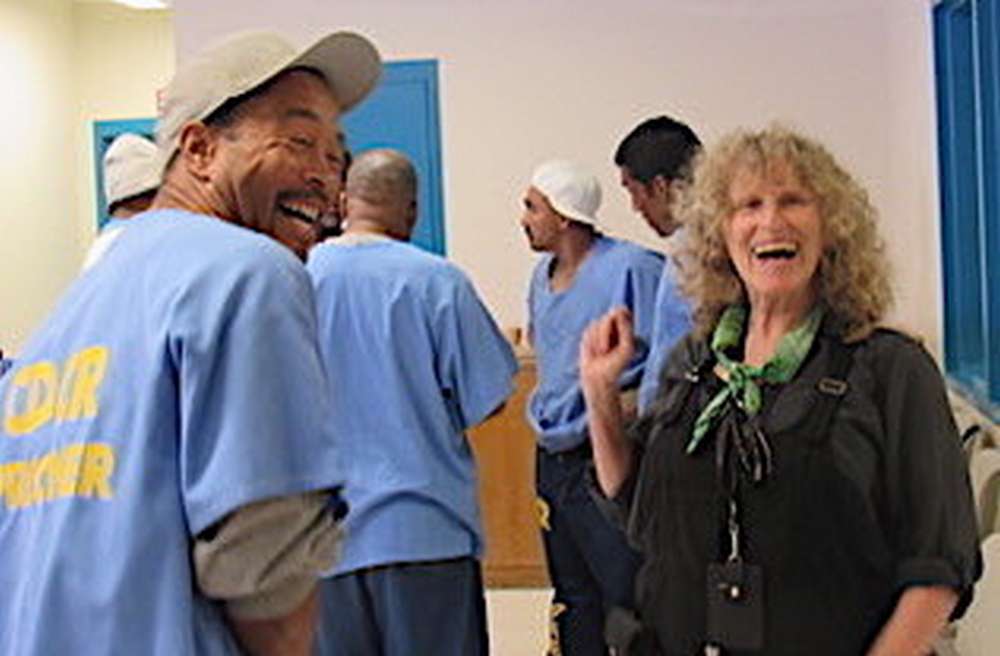 Using theatre to illuminate sociopolitical issues has been my artistic focus since 1973 when I was hired by Living Stage in Wash, D.C. Prior to that, I had been working as a classically trained actor, but always had a strong personal passion for social change. Living Stage trained us as improvisational physical theatre actors and workshop leaders. We did performance workshops for youth, in community spaces for marginalized populations, and in prisons and halfway houses. The foundation of the Living Stage practice was the belief that all human beings are artists and are capable of creating works of art. After I left the company and branched out on my own, the Living Stage philosophy remained my guidepost and informs my practice to this day.

I had long dreamed of doing a project with industrial workers, where their stories would be brought to life through theatre, with them as the actors. In 1983 I wrote and was awarded my first California Arts Council (CAC) Artist in Communities (AIC) grant to work with unemployed steelworkers in Southeast LA. With this grant, I pioneered a form of documentary theatre and TheatreWorkers Project (TWP) was born. I collaborated with a number of other theatre artists including playwright Rob Sullivan and director Darrell Larson to create my first production, “Lady Beth: the Steelworkers Play” which toured 16 cities, co-sponsored by Bruce Springsteen and was profiled in a PBS documentary. I went on to receive multiple CAC AIC grants to collaborate with several other artists to work with shipbuilders, longshoremen, critical care nurses, and Latinx immigrant workers. Collaborating again with Rob, I traveled to Austin, MN. to lead the development and production of a play about and with striking meatpackers and several years later I was funded to produce a play about Longshoremen.

In 1990 I produced Journey to “Singapore: the Infertility Play” that chronicled my quest to conceive a child. What was to be a play about struggle ended up being about success—I became pregnant halfway through the development process and the playwright had to rewrite the ending. I performed that play while 8.5 months pregnant and, on November 6, 1990 I gave birth to a son and I had to put my theatre work on pause. I worked as a story analyst for TV and film for 7.5 years and worked part-time as a teaching artist for private and public schools while my son was growing up.

My work as a teaching artist led me to conceive more TWP programs and initiatives including the co-creation (with Shakespeare Center/LA) of audition prep workshops for underserved youth and Shakespeare Remixed, a summer experience for kids ages 6-16. During this time, I continued to write and receive CAC Artists in Schools grants leading TWP in residencies for public and private schools. While my teaching artist work was giving young people opportunities to explore unique theatre forms, there were sociopolitical subjects I could not address. I hungered for the professional, community-based work that I felt was my calling. In 2014 I began producing and directing productions that tackled controversial themes, always including Second Act discussions that were essential parts of TWP’s format. In 2015 I attended an Arts in Corrections conference that included a trip to San Quentin where I saw a performance of The Artistic Ensemble. The work was incredibly inspiring, and I knew I had to return to my roots and do similar work with people impacted by incarceration.

In 2016 I began to lead programs in the reentry community. Funded by CAC and California Humanities grants, I assembled a team of artists with whom I continue to collaborate on workshops and productions. In 2018 I began leading a CAC Arts in Corrections residency at California State Prison, Lancaster. Working in reentry and in carceral settings has transformed my life and deepened my commitment to TWP’s mission. I’ve been honored to work in these communities. Witnessing the artistry of these individuals has had a profound effect on my approach to teaching and directing. We’ve been doing this program via correspondence throughout the pandemic and I’m looking forward to the prisons opening back up so our in-person programming can resume.

While I continue my TWP work, I’ve returned to teach and direct at LA County High School for the Arts (LACHSA) where I taught Ensemble for First Year students for 10 years.

TWP recently received an LA Arts Recovery grant which provides funding, over 2 years, to increase our diversity by training and hiring emerging BIPOC artists and supports our collaboration with Project Rebound at Cal State LA. This funding will also support the planning for a community-based theatre project about Life Without the Possibility of Parole. The post-Covid future looks exciting. I can’t wait to move forward! 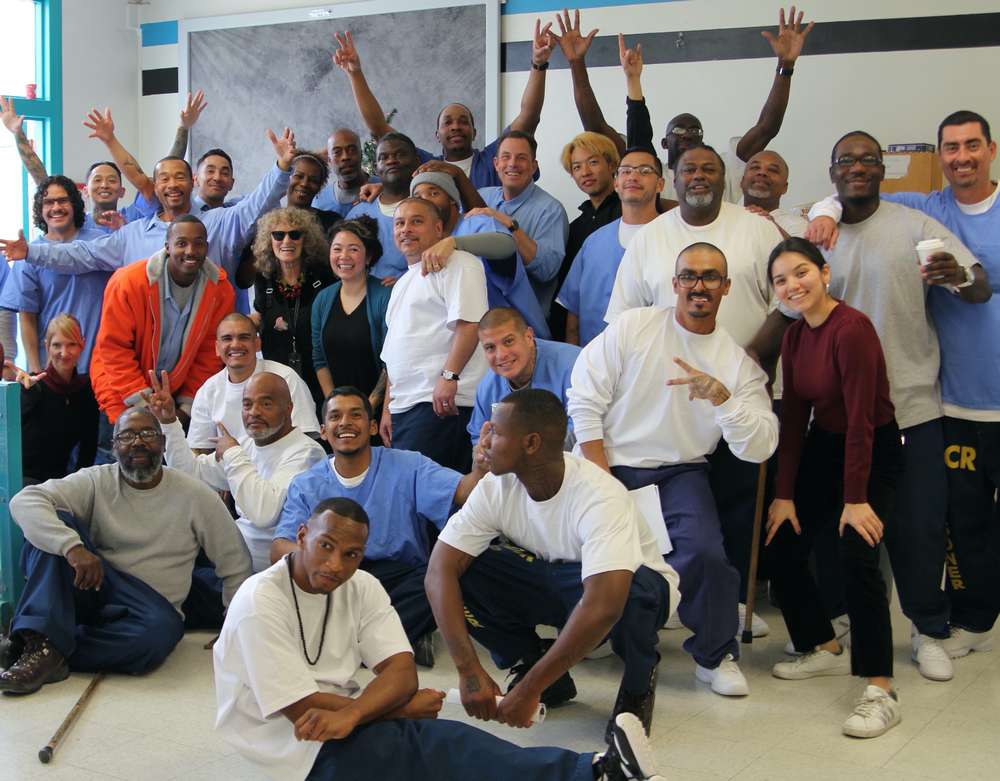 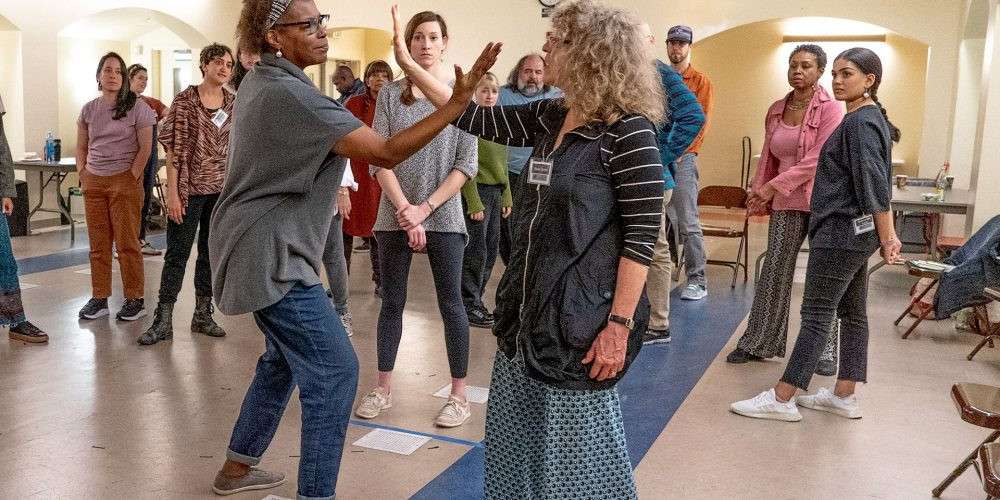 If you had a friend visiting you, what are some of the local spots you’d want to take them around to?
I have so missed sitting in a theatre watching a live performance, so that’s the first thing on my list. So this imaginary visit would have to take place after theaters opened for in-person attendance.

For the week that my friend was here, I’d book tickets for 4 or 5 plays and combine these outings with the most delicious meals at restaurants that I love. I would take them to eat spicy Thai food, high-quality sushi, unique tacos, and great thin crust artisan pizza with giant salads. We’d have brunch at places that specialized in assortments of fresh bakery items, organic fruit, and delicious hot decaffeinated beverages. On the days that we didn’t go to see a play, we’d go to art exhibits and museums and take a drive to the mountains to have a picnic that included the best sourdough bread, an assortment of cheeses, fizzy water, and chocolate–lots of dark chocolate! Clearly, I would have to suspend my Weight Watchers tracking for this week and jump back on board after saying goodbye to my friend. 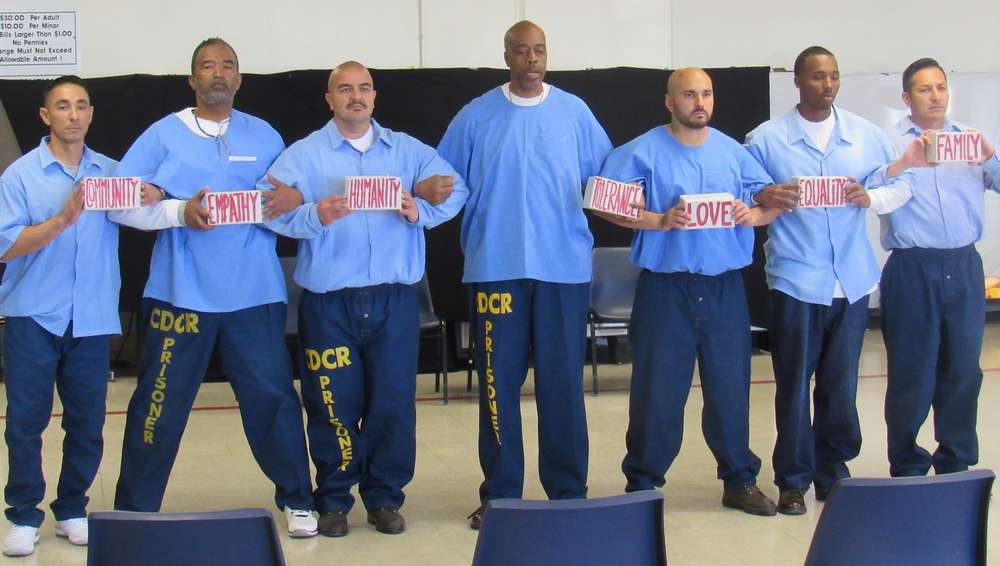 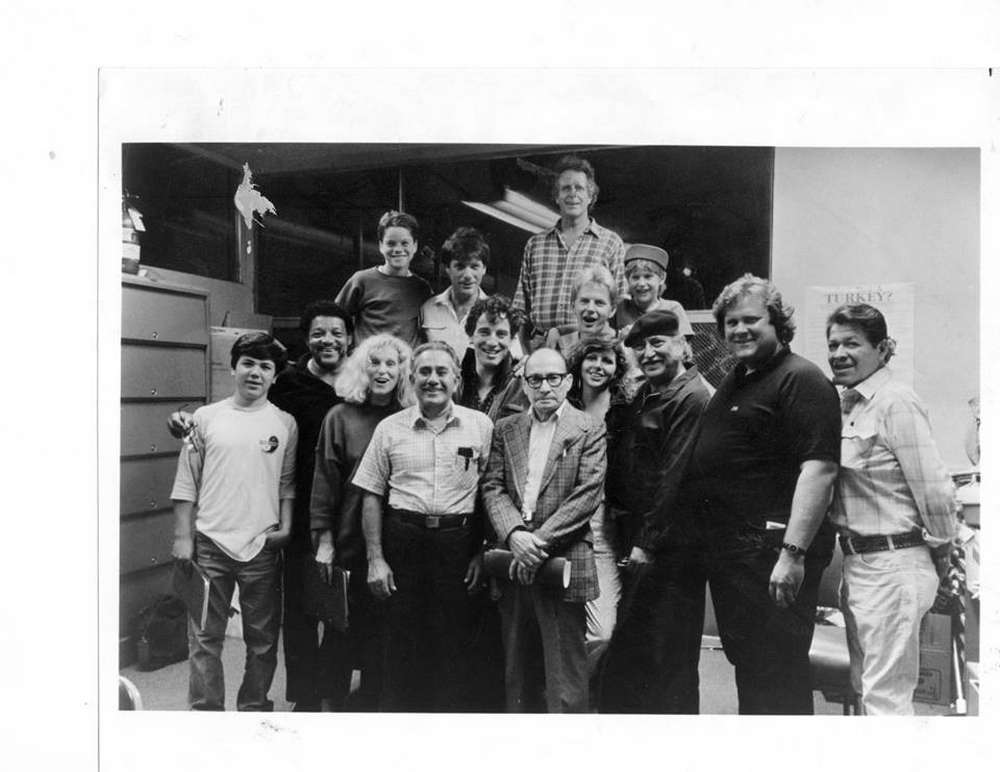 Who else deserves some credit and recognition?
My love of the arts, especially dance and theatre, was launched at a very young age by my parents. Our house was filled with artwork, they took me to see ballet, plays, and concerts, and encouraged my love of performing. My mother drove me to drama and ballet lessons multiple times a week for years until I was old enough to drive myself. My parents augmented my income when I was a struggling actor so I could pursue my dreams. I grew up in a very politically active home. I was surrounded by my parents’ friends and colleagues who were writers, filmmakers, artists, and activists who combined their artistic talents with political activism. They inspired me. My parents instilled in me a commitment to social justice and a passion for art that uplifts underserved and unheard communities — these qualities are what has driven my work for the last 30+ years.

All credit for the physical and improvisational theatre skills that I have called upon to expand and develop TheatreWorkers Project over the years goes to my mentor Bob Alexander and my 6-year relationship first as a company member and then as simply a teaching artist with the Living Stage in Washington, D.C. This is where I learned how to teach and combine my political beliefs with socially engaged theatre practice. I would not be the theatre artist I am today without my Living Stage experience.

A huge Shout Out to my husband Frank Curtis and my wonderful son, Conrad. Frank worked for many years as a phone installer and was the main breadwinner for the first 29 years of our marriage providing health insurance (which continues under his retiree status — a rare commodity for an independent artist to have). A former steelworker, he was a key participant in my initial TheatreWorkers Project production, and his poetry illuminated the dignity and contributions of the working class, so often forgotten by most Americans. His grasp of history, economics, and politics and his commitment to striving for a world with abundance for all has been my guidepost. Our dearest Conrad has grown into a brilliant, compassionate, daring adult who has inherited my love of creative risk-taking. As a member of the Directors Guild of America and an entrepreneur, he is destined to do great things as a member of the entertainment industry. He challenges and inspires me every day.

Last but far from least are my TheatreWorkers Project colleagues and the hundreds of participants without whom none of the work I’ve done would be possible. I’m particularly grateful to those in reentry communities and the incarcerated men with whom we have worked at California State Prison in Lancaster. Their deep humanity and artistry humbles me. I’m honored to be able to collaborate with them.