We had the good fortune of connecting with Zhiqiu Jin and we’ve shared our conversation below.

Hi Zhiqiu, is your business focused on helping the community? If so, how?
Film, in my opinion, is a tremendously powerful medium capable of changing the world. The pandemic has wreaked havoc and sparked resentment, particularly among Asians. Since 2020, the number of Asians attacked in public has risen dramatically. The prejudice brought on by a long-held stereotype about over the pandemic issue worsened the situation for Asian people. I believe one of the most effective methods to break the stereotype is to speak up and gain greater mainstream media exposure for our community.

According to a study conducted by USC Annenberg in 2017 on 1,100 famous films, 70.7 percent of the characters were Caucasian, while only 6.3 percent were Asian. This demonstrates how the Asian population is represented in Hollywood cinema in a very restricted way. Kung Fu Master, geeky appearance, and hilarious sidekick are all stereotypes associated with Asian characters. Optimistically, different Asian portrayals have been brought to the big screen in recent years. Crazy Rich Asians (2018), for example, is one of the highest-grossing romantic comedies of the recent decade, delving deeply into the multifaceted characteristics of an Asian family. Shang-Chi, the first Asian superhero, became a cultural touchstone for Asians in Western pop culture. Furthermore, Everything Everywhere All at Once (2022) illustrates the characters’ deep humanity through their interpersonal problems, cultural value, and conflicts in parent-child relationships. While showcasing the uniqueness of an Asian family, this film also highlights universal characteristics that all audiences may relate to. These films inspired me much, and I realized that as a member of the Asian community, I should do my part to help push our community and marginalized persons into mainstream exposure. Days of Being Blind, a documentary I co-edited in 2019, introduces The Village for the Blind, a community in Wuhan, China. The living conditions of these blind elders, who are submerged under the fast metropolis, have been exposed to the audience through the recording of their daily lives. The film has been officially selected into Indie Short Fest 2019, Independent Shorts Awards 2020, and Los Angeles Independent Film Festival Awards 2019. These accolades motivates me to use my strength and filmmaking skills to make a contribution to Asian society and show the world who we really are. 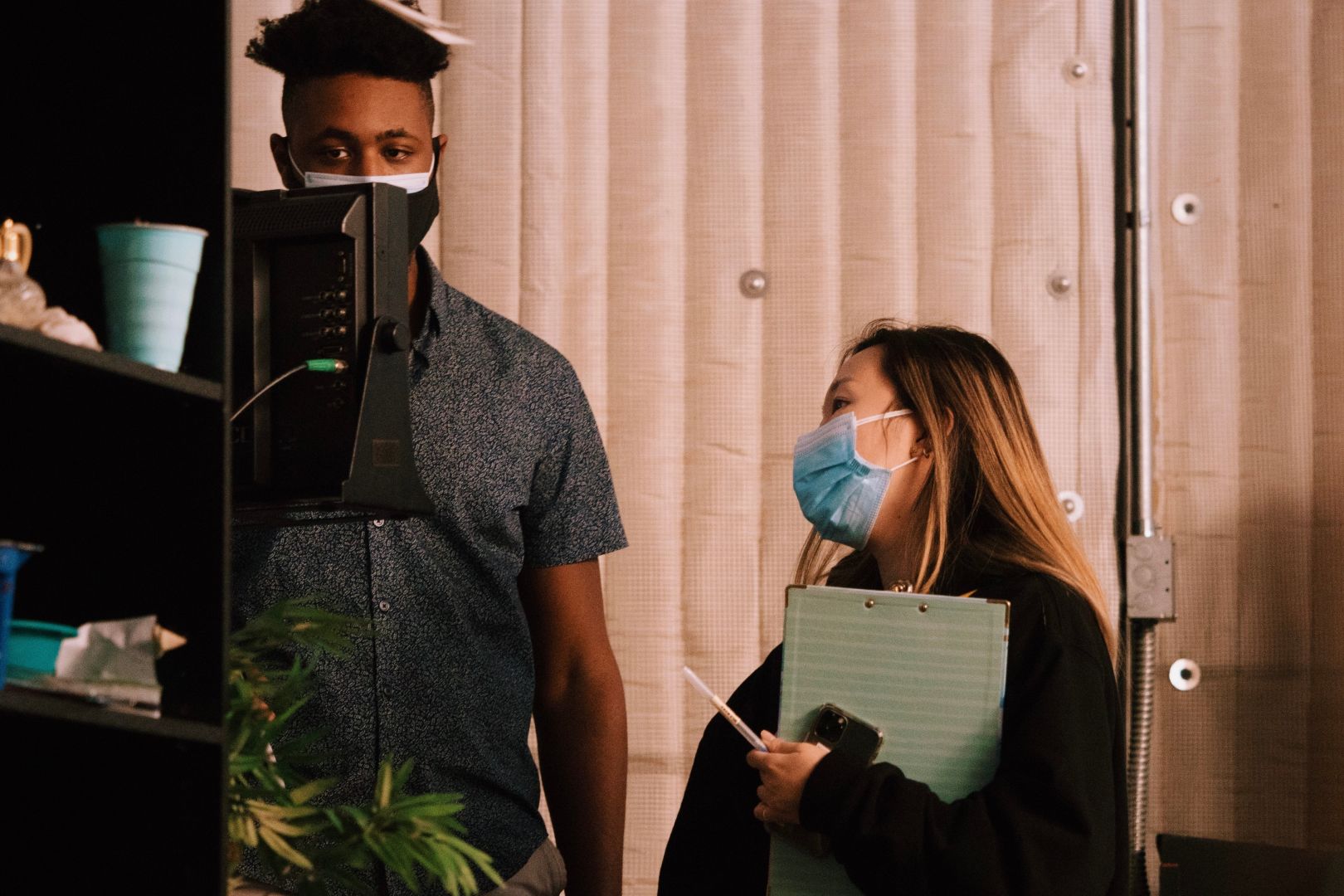 Let’s talk shop? Tell us more about your career, what can you share with our community?
My name is Zhiqiu Jin, and I go by Roxy. I am a filmmaker/editor with six years of experience in all types of projects, including narrative feature and short films, music videos, documentaries, and commercials. I have won Best Editing awards in Hollywood Gold Awards, New York International Film Awards, and International Independent Film Awards. I am currently working as a freelance video editor.

My passion for visual storytelling stems from my love for music. As a Korean Chinese family member, I was exposed to South Korean pop culture (a.k.a. K-pop) when I was 11 years old. I can still remember the night after my grandfather watched a South Korean variety show, when a snippet of the most famous group, TVXQ’s music video for their latest single ‘Rising Sun’ was shown alongside the rolling credits. The catchy melody, choreography, and, most importantly, the visual content of the music video pulled me in right away. I got fascinated by how well-designed moving images can drastically enhance the power of music. This encouraged me to pursue a career in the music industry after graduating from UCI. With the video production experience I gained during my college years, I worked as a video editor at ModernSky Entertainment, the largest indie music publishing organization in mainland China. Instead of simply editing music-related teasers with the fast pacing and flamboyant visual elements, I had the precious opportunities to work on artists’ behind-the-scene documentaries, which made me realize that I am interested in not only creating the visual content with the mere external expression, but also digging out the inner meaning of the image to bring out the emotion. This self-discovery urged me to polish my editing skills in storytelling. In 2018, I was admitted to Dodge College of Film and Media Arts at Chapman University to pursue my MFA degree. Under the guidance from Paul Seydor A.C.E. and Bruce Green A.C.E., I had just taken the first step into the film industry and pursued my dream of becoming a successful editor with confidence.

The path is fraught with challenges and obstacles, such as balancing my dream and family responsibilities. In traditional East Asian culture, parents would give up everything to raise their children, while children are expected to care for their parents once they reach adulthood and become independent. Due to the pandemic, I haven’t seen my parents in at least two years. My parents constantly stressed how much they missed me and suggested I return home after graduating from Chapman, which put me into a dilemma. After all, going back home means I’ll be able to live a more comfortable and stable life. At the very least, I don’t have to worry about paying rent or utilities. With much back and forth consideration, I told them that I had chosen to stay in the United States and refused to live an “easy” life. Fortunately, they understood my decision and allowed me to keep pursuing my dream. With my family’s support, I believe I can overcome these challenges and obstacles through perseverance and determination.

The years at Chapman taught me to be a more adaptable editor. Before I got into Chapman, I always thought an editor’s key trait was to be well organized and detail-oriented. Specifically, I believed that the best edit point should be without any continuity problems. Every tiny continuity mismatch would be immediately seen by the audience, eventually ruining their viewing experience. Therefore, I was obsessed with avoiding any continuity issues when putting the footage together back then. However, this habit somehow limited my creativity. Dodge, fortunately, changed me. I remembered the restaurant scene of “Funny How?” from Martin Scorsese’s Goodfellas (1990) was screened in class. The first time I watched it, I was so immersed in the story that I didn’t notice any continuity problems until the professor pointed them out afterward. The professor chose this clip to demonstrate how the continuity issues may be completely ignored when there is strong tension, pacing, and emotion. With more experience in editing since then, I found out that there are a lot of uncertainties during the production process. Instead of confining myself to these “trivial” details, I began to shift my focus on building characters and generating emotions through my editing. Moreover, over the past three years, I have developed a stronger mentality. As an editor, the footage I got somehow would be different from what I expected. Three years ago, I would have been very disappointed. Gradually, instead of thinking pessimistically, I became more calm and concentrated on how to tackle the difficulties. I would also take it as an opportunity to make a breakthrough and improve on my editing technique. Besides, I would feel accomplished whenever I conquer these problems. Overall, I appreciate my time at Dodge College because it taught me filmmaking knowledge and qualities that are hardly acquired through textbooks but are necessary for my success. 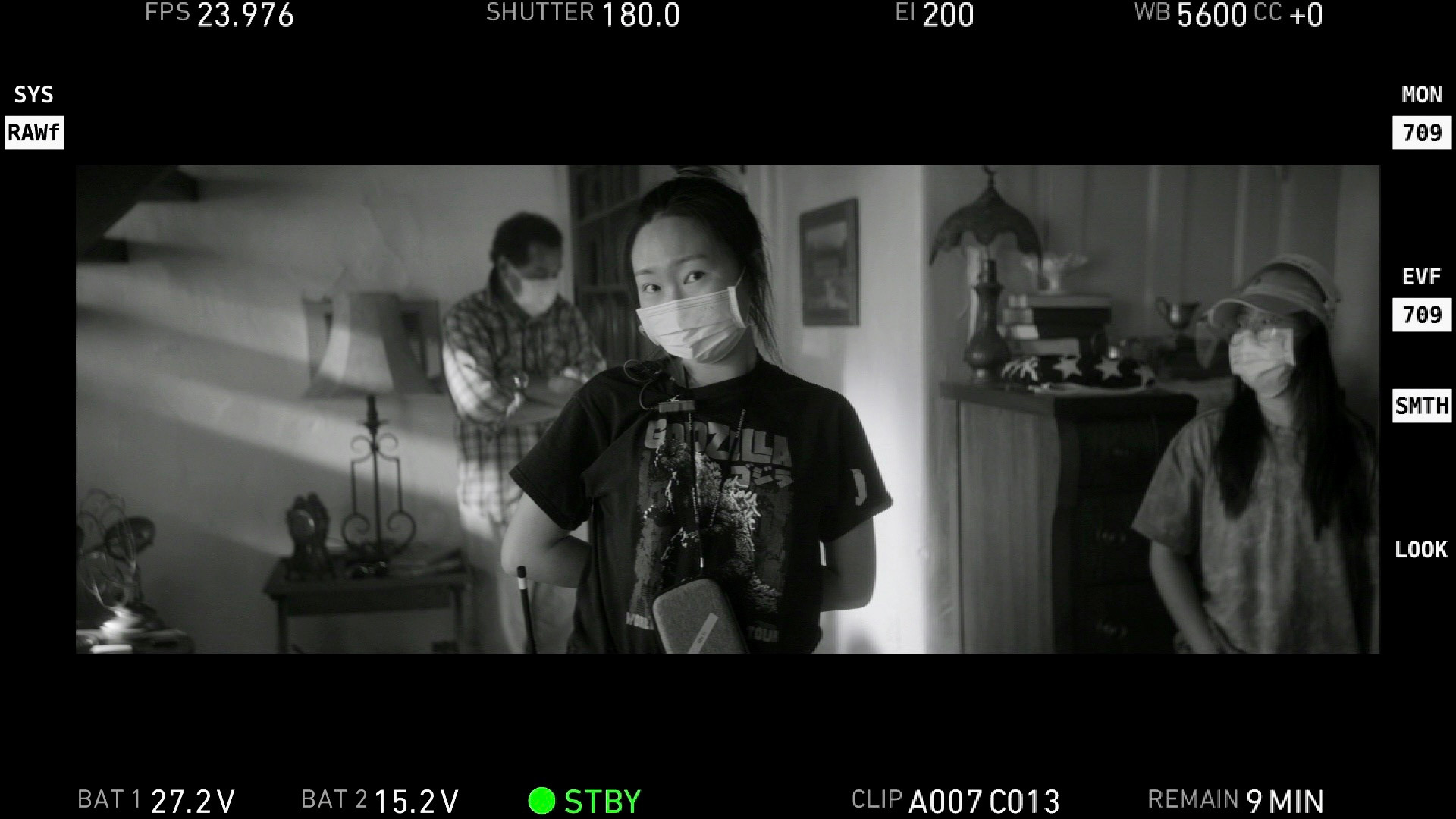 Let’s say your best friend was visiting the area and you wanted to show them the best time ever. Where would you take them? Give us a little itinerary – say it was a week long trip, where would you eat, drink, visit, hang out, etc.
As a boba enthusiast, the first thing I do when visiting a new city is look for the best local boba joints. My ultimate goal is to try out every single boba shop on the planet. So if any of my friends come to visit, I will “force” them to visit one of LA’s best boba shops. I have three boba shops that I highly recommend. The first is Chi Cha San Chen. Their boba is the chewiest and most flavorful. Then, it’s Xing Fu Tang. Xing Fu Tang uses organic milk in their drinks instead of milk powder, making their products at least sound healthier. Tiger Sugar, last but not least, has the best brown sugar drinks.

As a filmmaker and a movie lover, I will definitely take my friends to some of the city’s most iconic movie theaters. I’m not talking about AMC or Regal lol. The Frida Cinema in Orange County is my go-to theater for watching old classic movies. For example, this April is Frida’s month of Studio Ghibli. They are screening some classical films, such as Spirited Away (2001), Ponyo (2008) and Grave of the Fireflies (1988), that are hardly seen on the big screen nowadays. Another cinema that is worth mentioning is the New Beverly Cinema, owned by Quentin Tarantino. According to my own experience, this cinema not only shows Tarantino’s films, but also the films that he loves. 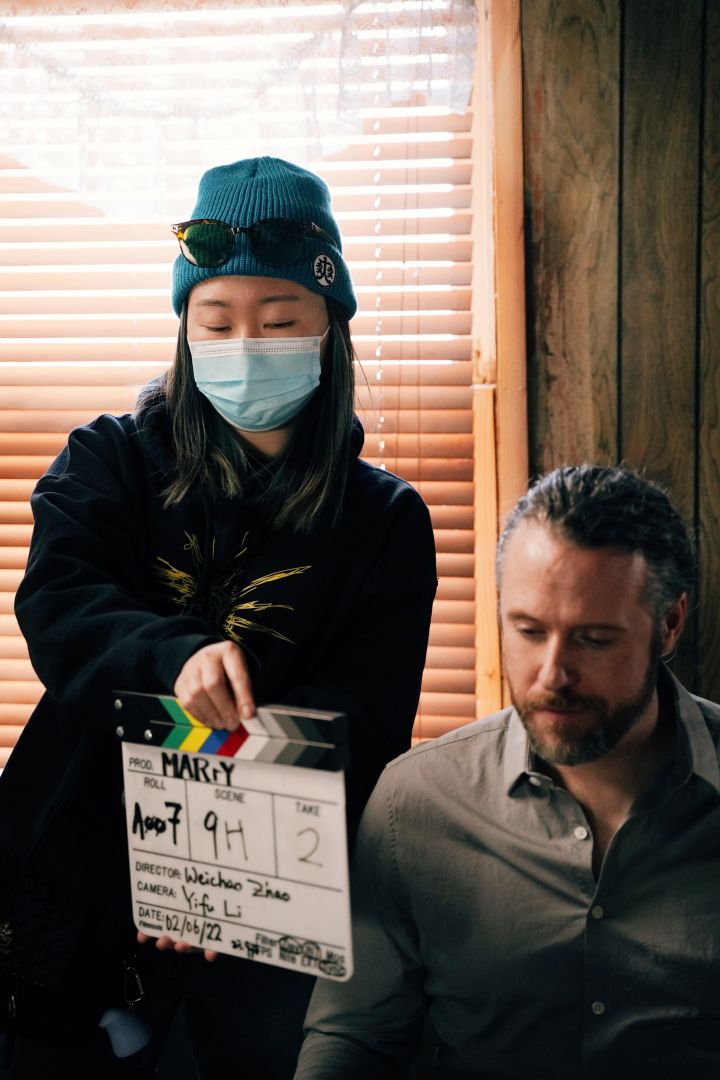 Shoutout is all about shouting out others who you feel deserve additional recognition and exposure. Who would you like to shoutout?
I would like to give a big shout out to one of my biggest mentors, Thomas Ethan Harris, who I consider to be the lighthouse in my film career. He pushes my understanding of visual storytelling and my aesthetic on filmmaking to new levels. When I was in college, I saw several East Asian films, such as Edward Yang’s Yiyi (2000), Hou Hsiao-Hsien’s Dust in the Wind (1986), Hirokazu Koreeda’s Still Walking (2008), Lee Chang-Dong’s Secret Sunshine (2007), and etc. Around that time, my perception of these films was mostly based on the countries’ cultural and socioeconomic aspects. Thomas, on the other hand, inspired me to take a closer look at these films’ formal and narrative elements. He helped me realize how these films have such a large global impact that they can be called masterpieces. Furthermore, he has broadened my understanding in film genres. One of the most impressive examples is his analysis of the horror genre. I used to believe that horror films mainly focus on entertaining the audience through intense visual and audio elements. However, Thomas showed us that a successful horror film should evoke viewers’ fears and terror of the unknown, and that it is an external projection of our shared nightmares. My new perspective on this genre inspires me to take on the task of making a horror film based on my own fears in the future. Once again, I’d like to express my sincere thanks to Thomas for greatly shaping my aesthetic choices and editing style.

I would also like to shout out to my friends in Chapman, Yuan Circle Hong, Yi Yang, Cynthia Zhong, Xinrui Wang, Jingxi Zhu, Will Li, Yifu Li, and everyone else who has supported me and shared many wonderful times with me. I genuinely hope that we can all have a bright future, fulfilling our goals and live happy lives. 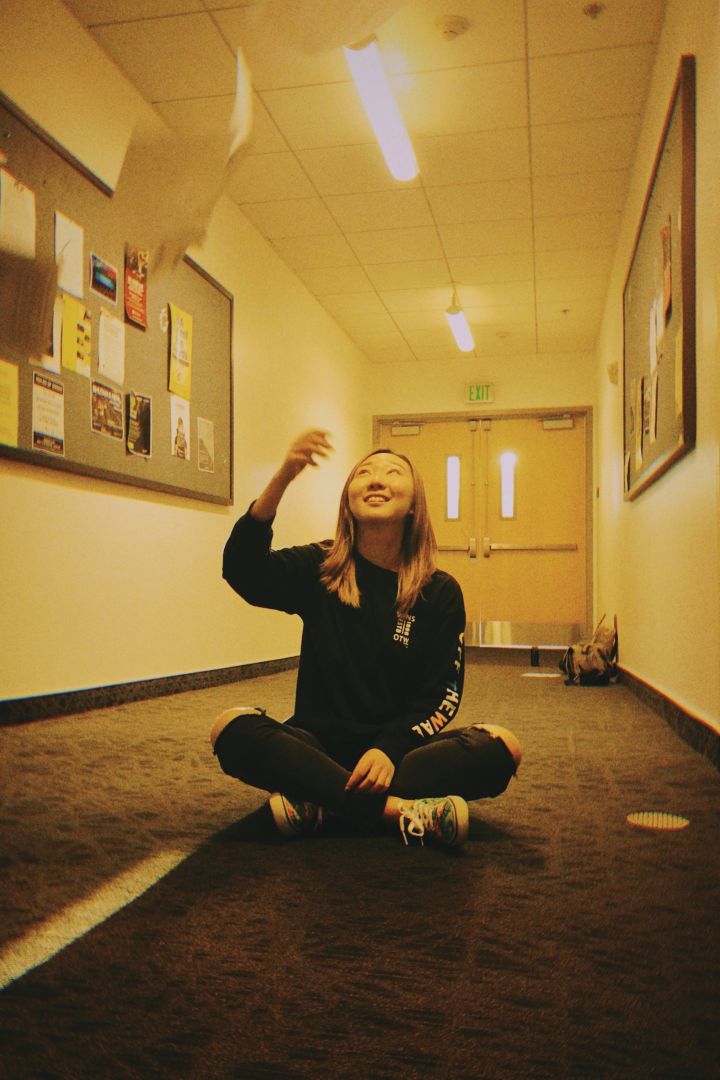